Welcome to Shiretoko Penninsula, blog fans. The word “shiretoko” is derived form an Ainu word “siretok“, meaning “end of the Earth“, which seems very appropriate for one of the most isolated regions in Japan. We thought we’d seen the wildest, remotest parts of Hokkaido already…., turns out we were wrong. We’ve only been here a few hours but already it’s obvious that in this part of the world Nature still reigns supreme. It’s awesome!

It took us pretty much the whole day to get here: first the long train journey from Asahikawa to the coastal town of Abashiri, then another couple of hours on one of those tiny, single-carriage trains to Shari – our home-away-from-home for the next few days. The view from the train was captivating; hundreds of kilometres of green, lush farmland and dense forest. 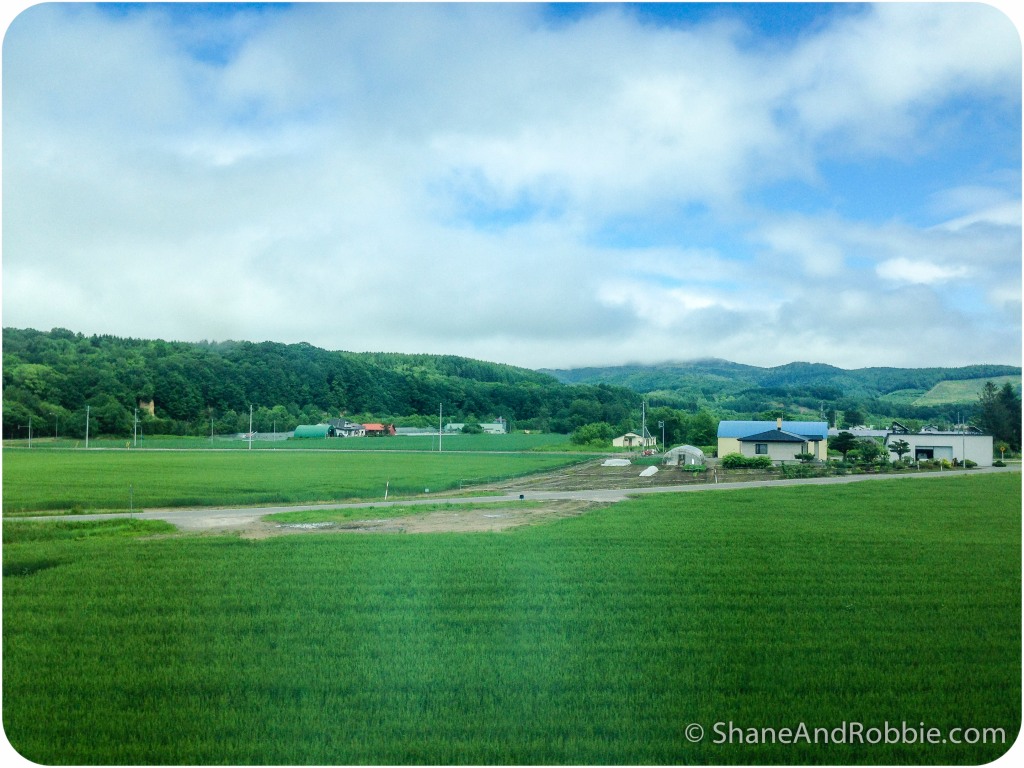 Shari is a small town (population about 13,500) on the fringes of Shiretoko National Park, in the far North-East of Hokkaido. The town sits at the base of Mt Shari, looking out on the Sea of Okhotsk. Agriculture and fishing are the main industries here, with hairy crabs, salmon*, corn and potatoes being the main products Shari is famous for. As the last bastion of civilisation before you enter Shiretoko, the town is also used by tourists like us who want to visit the national park by day, but return to warm beds, hot showers and good food at night. Perfect for a couple of semi-adventorous types like us!

*The salmon yield from the Sea of Okhotsk is the largest in Japan. 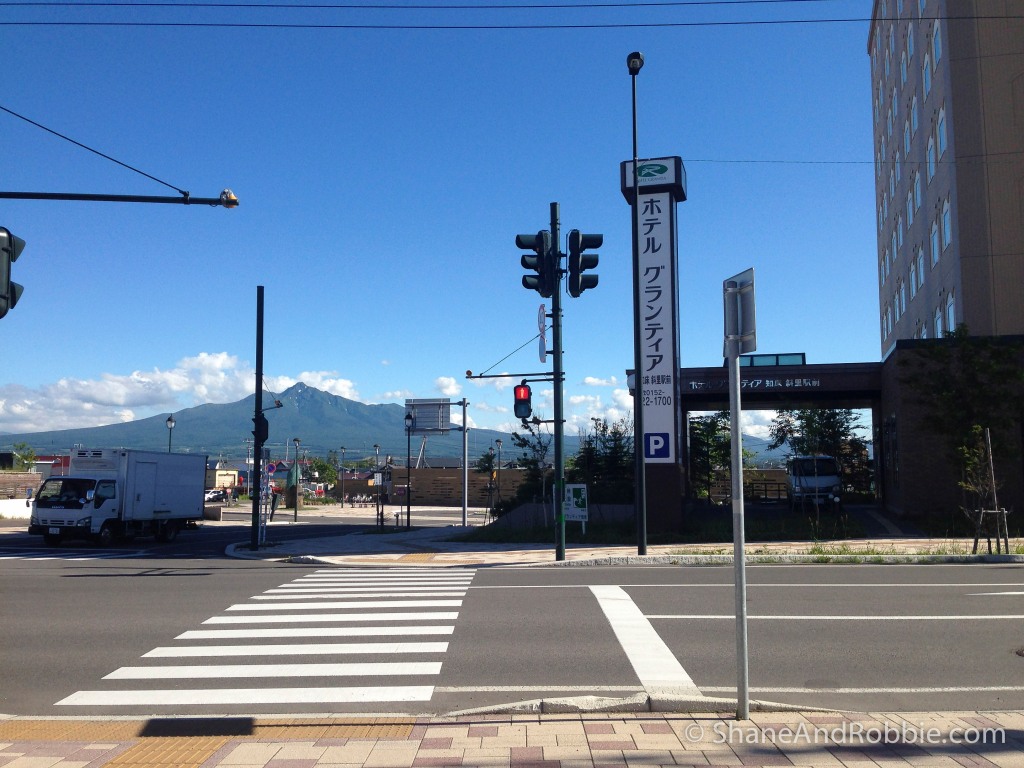 Shiretoko is a long, narrow peninsula with an active volcanic mountain range running down the centre. The entire peninsula is  national park and there is just one road that goes into the park. Most of Shiretoko National Park is, in fact, only accessible by boat or by foot – and even then usually only for the short summer season as winters here are harsh and very cold (they get 6-7m of snow every year and the sea freezes over for 4-5 months of the year). There are no sizeable towns on the peninsula  and very few human inhabitants, which means the deer, foxes, bears and other animals pretty much have the whole 176,000 acres to themselves. This UNESCO Natural Heritage Site is considered to be the last pristine wilderness remaining in Japan and it is seriously wild. Even the little we’ve seen of the “bush” so far has left us a little awed. 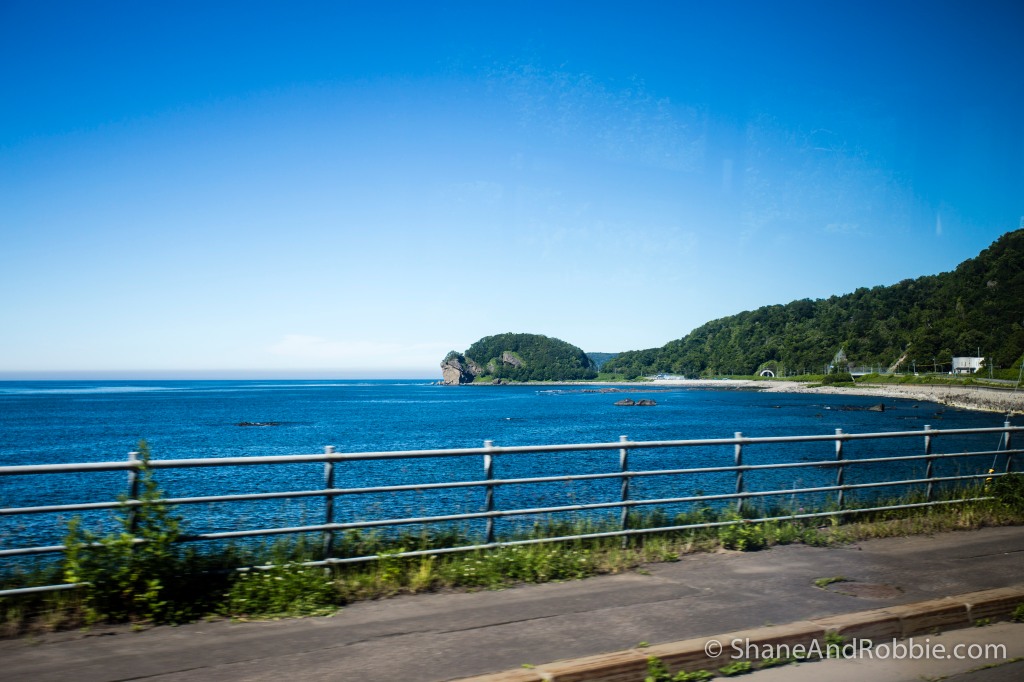 As we got into Shari quite late we didn’t get a chance to explore much beyond the few streets in the centre of town (not that there’s much to the town – it’s very small), but one thing we DID find was a great restaurant for dinner! It’s a tiny little place, run by an elderly husband and wife team who, we found out, have been running the place for 40 years. The whole restaurant could only accommodate 12 people and there was definitely nothing “Westernised” or “franchised” about this place – the menu was in hand written Japanese (even the prices!), and the food was all fresh, local and made on-the-spot. Shane did a marvellous job deciphering the kanji and we ordered what we thought were salmon-filled gyoza (translation = Japanese dumplings), tempura prawns, grilled salmon with eggs, boiled rice, mixed pickles, miso soup and a daikon salad. Turns out we were mostly right; the “grilled salmon with eggs” was actually “grilled salmon with salmon eggs”. Small but important word of difference there. So instead of a bowl of grilled salmon with hard boiled chicken eggs, as were expecting, we got a bowl of grilled salmon and warm, raw fish eggs. And not the tiny little fish roe you get on sushi back home in Aus; no, these were giant fish eggs big enough to burst in your mouth with an audible *POP* when you bit down on them. It actually wasn’t too bad – a bit fishy and salty, but mixed in with the rice and pickles, it all went down OK. Goodness know what wondrous ocean-faring creatures we’ll be eating tomorrow night…. 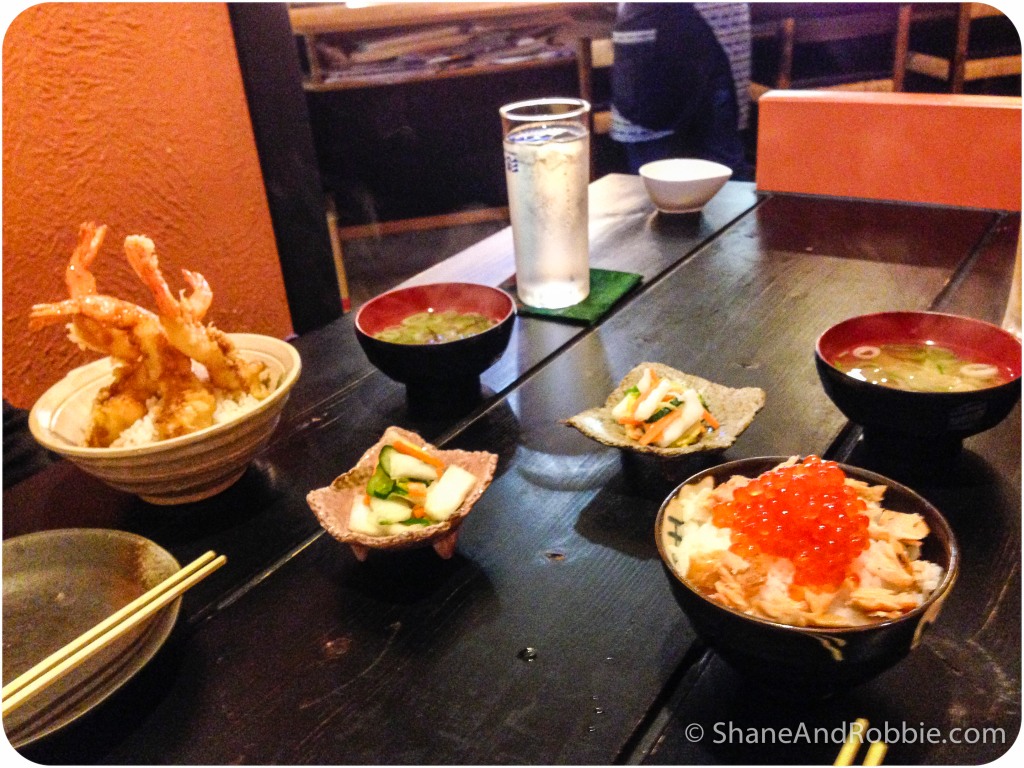