Every epic journey should start with a good wholesome breakfast. So, ignoring the recommendation of our fawningly helpful hosts to go for a vending machine breakky, we started the day with a wander to the Osaka train station thinking we’d find something savoury and awesome fairly easily. Map? Check. Right map? Double check. Know where we are on the right map? Triple check and good to go. Sunday morning at 7:30am and the streets were pretty much deserted – no complaints from us. The day’s mission was to get from the hotel to Osaka Castle (4 kms) then to the shopping mecca of Dotonbori (4 kms), then back to the hotel (5 kms).

We found a likely candidate for breakfast within 10 minutes, but spent a few moments looking like birds trapped against glass as the damn sensor on the entrance wasn’t working. Can’t. Get. To. Tasty. Treats. *Paws at glass, backs away, tries again, looks at door as though it kicked your crippled dog.* Turns out the door WAS working but you have to press the little white thingy on the door to open it, as a smiling staff member demonstrated after watching our antics.  Well played Japan, well played. Japan idiosyncrasies 1, Australian geniuses nil.  Note to selves: Japan wants you to touch things to interact. Remember this.

We ditched this first option for breakfast as much for shame as dissatisfaction with the menu – a glorified bakery and not the Japanese experience or protein quota we are committed to. So instead we opted for a tiny noodle bar full of loudly slurping local folk. A nice hot bowl of meaty ramen *double fist pump with a knee high and a high five* boo yah!

Armed with the Japanese I spoke fairly well 20 years ago, we stormed in with confidence to be confronted with a post- apocalyptic nightmare where machines stand between you and anyone who can help you, and you stand between the hungry throng and their breakfast. 40 buttons, 4 colour schemes and not a jot of English to be seen.  I can make sense of a dozen options and we make a snap decision to go with a crab stick, poached egg, noodle and vegetables with ramen noodles. Sounds safe right? Wrong!

Punch the button. Wait for feedback. Nope. Insert cash, punch the button, there ya go! One ticket pops out. Repeat and wait for change for the clearly marked (in Japanese) change tray. No dice. So I remembered that Japan likes you to touch her to communicate so I touch the change thingy and bingo, 2 tickets and change appear. We then take said tickets to the human worker in exchange for tasty treats.  As we handed over our tickets the lady asked us, with polite trepidation: “Cold one. OK?”. To which Robbie and I shrugged and said “Sure!”. BIGGEST MISTAKE OF THE TRIP SO FAR.

So here’s where it all got real, really quickly. Standing at the bar, head bowed over bowl, noodles embedded in gob, breathing in as we slurp up the noodles. That’s how it’s done, after all. Then boom, Japan lets fly with a swift uppercut to our fragile Western palate and nasal sensibilities and we drop to one knee and take a standing eight count from the ref. What, the hell, just happened? Robbie is slack jawed and, I’m pulling a face that’s usually reserved for going third into the toilet at an all you can eat burrito hut. The noodle breakfast is cold and FISHY. Like nothing either of us have ever experienced on Earth.

I’m feeling the most stomachly stoic so I wade in and start prodding things and doing the sniff and taste test to find the evil culprit that smells like an oyster’s fart and has an aftertaste Lucifer’s own anus could not match.  There’s an innocuous looking white, granulated substance which seems to be the funky one, so we push it aside, take a breath and have another crack. Tolerable! No gag! Might actually be able to eat this. Robbie was still not convinced. The exact phrase was “I don’t think this is going to work”, but work it did – cold egg and all. Had it been hot, it might not have been so challenging, but between bonito flakes, cold soup, oyster farts and egg, this one goes down to experience and history. Japan 2, stupid gaijin (translation: foreign, ignorant white folk) nil. 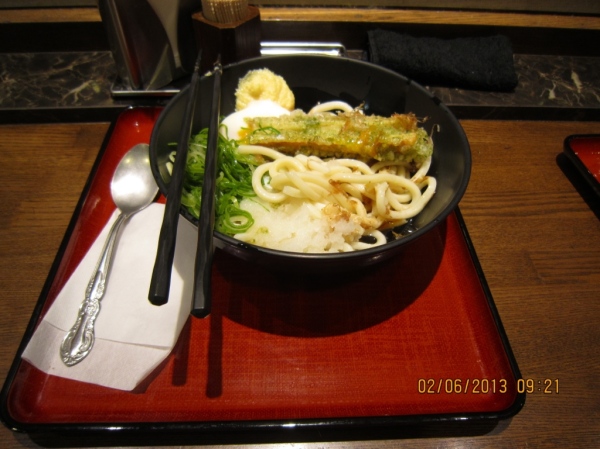 After a start like the one Shane just described, we had to decide: do we dare go on, or should we just pack our bags and go home now? Deciding we were not going to be out-done by one foul, fishy breakfast mis-adventure, we continued on. And thank goodness we did – what an awesome day! Our sight-seeing started first and foremost with the site that attracts more visitors than any other in Japan: Osaka Castle (Osaka-Jo).

Just to give you a bit of background: Osaka is Japan’s third largest city, after Tokyo and Yokohama. It is a heavily industrialised centre famous for being the birth-place of such commercial giants as Toshiba and Fujitsu. The city itself is characterised as being laid back and relaxed by Japanese standards, with a vibrant arts and live music scene (to give yo an example: it is common practice for amateur and start-up bands to set-up and play impromptu concerts in parks and on the side walk throughout the city centre on Sunday afternoons, giving the locals a great excuse to hang out and enjoy the music for free – as we discovered walking around this afternoon). Very funky. Osaka is also Japan’s greatest foodie haven – I mean, these guys invented takoyaki (translation: octopus dumpling thingies that taste AWESOME)! Osakans have a deep appreciation for all things gourmet; in fact, they have a phrase that means “to eat oneself bankrupt”, to describe what happens when you try to savour all the culinary delights that Osaka has to offer.

Historically Osaka has always been a wealthy city, having been the major port for trading with China, Korea and, later Europeans. It was also the capital of Japan for about 50 years in the Seventh Century (Note: Many cities in this part of Japan have had that privilege as it was customary to move the capital city of Japan every time a new emperor came into power. This custom was changed about 400 years ago, but ancient Japanese history is littered with old ex-capitals.)  Of particular note, when the warlord Toyotomi Hideyoshi (a veritable tyrant by all accounts) came into power in 1583, he decided to build the biggest castle in Japan. It’s 8 stories high and apparently took 30,000 men 3 years to build. The castle and surrounding gardens occupy an entire hill and was a serene, green place to wander for a few hours. The photos below give you a bit of an insight into how massive the castle is, and how beautiful the gardens are. Both castle and gardens were stunning and so characteristically Japanese – a very gentle but impressive start to sight-seeing in Japan. Almost made up for breakfast really. 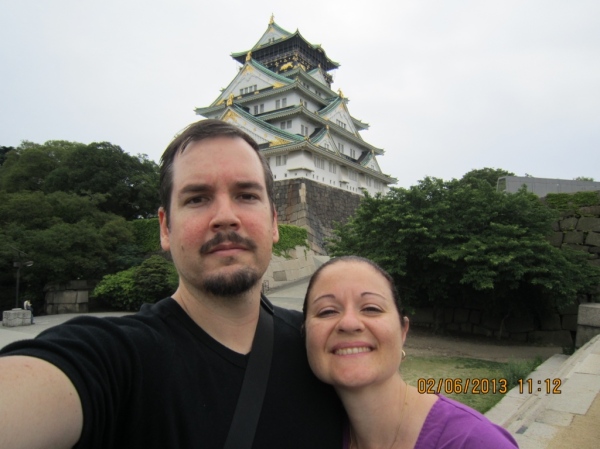 Shane and Robbie do Osaka-jo.

From Osaka-jo we walked to Osaka’s major shopping district: Dotonbori.  It was in Dotonbori that we found all the people in Osaka – ALL of them. It was soooooo busy! Dotonbori-dori (Dotonbori Street) is this insane pedestrian strip of shops, restaurants, Panchinko Parlours, bars, nightclubs and street vendors. In addition to the main street, there are hundreds of tiny, intersecting alley ways jammed full of tiny shops (the Japanese are masters of what we have termed the micro-business – forget small business, some of these bars barely fit 10 paying customers!). It was the exact opposite vibe to the serenity and Zen-like calm of Osaka-jo Gardens. Wow! So this is where EVERYONE in Osaka goes on a Sunday hey?

“This is definitely the place to do lunch!” we think. So we pick a great little restaurant/bar that has pictures out the front of lots of cooked meat on skewers (i.e. yaki-mono). Cooked? Good! Meat? Good! Right? Wrong! Seems we managed to pick the restaurant that specialises in cooked HORSE MEAT and CHICKEN GIZZARDS on a stick. I kid you not people – check out the menu below. Their special of the day was even better: “Mixed Guts Soup”. Yup: soup made from mixed intestines, liver, tripe and other unmentionables. *Sigh* Seems we have a knack for tormenting our taste buds. Being the committed (maybe stupid) souls we are, however, we decided to stick it out and ordered a selection of chicken skewers (yaki-tori), trying not to think too hard about what part of the chicken each might actually be. Together with a salad and some cooked veggies, this actually turned out to be OK. Grilled chicken ovaries? Sure, why not!

Menu at the “Guts & Gizzards” place we went to for lunch.

Special of the day: Guts Pan for One!

Shane: Really not sure abut this lunch option…. 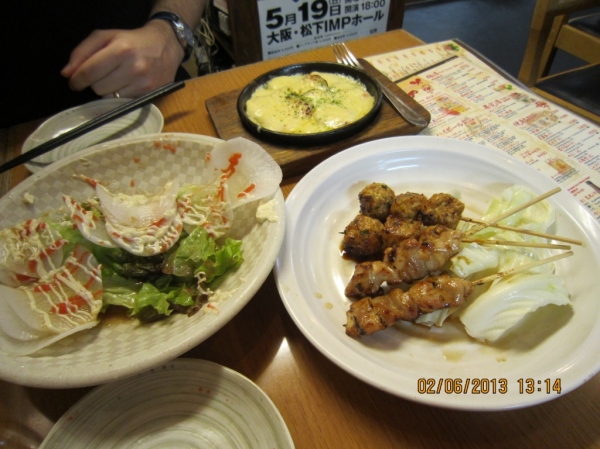 Feeling replete and sated, the rest of the afternoon was spent meandering through the alley ways checking out random shops and savouring the chaos and overt Japanese-ness of it all! Needless to say, once we arrived back at the hotel, we were pooped and spent the rest of the day chilling out, planning tomorrow’s most excellent adventure to Koya-san (Mount Koya).