DAY 12: RINGING THE DINNER BELL FOR ALL KISO VALLEY BEARS

Fancy a 10km hike through the Japanese wilderness? Sure!

Evening fans. For today’s adventure we took a local train (read “a very slow train”) from Nagoya up into the Central Japanese Alps. Our goal: the Kiso Valley. This densely forested river valley is relatively untouched by modern civilisation (though they do have electricity and modern plumbing – phew!), and is a great example of wild, alpine Japan at its finest.

In times gone past the Nakasendo Highway used to run through the Kiso Valley, providing feudal Japan with one of its major transport and communication routes. Two of the villages (Magome and Tsumago) that used to line the old highway still exist today, preserved intentionally as they would have been hundreds of years ago. The villages, or juku, have no electricity wires, TV aerials or telegraph poles in visible sight and cars are not allowed into the village. The streets are still cobbled as they once would have been, and all the shop fronts look like something from a samurai movie.

These two villages are now important historical sites and attract many tourists keen to a glimpse into what “olde worlde” Japan was like.  What many of the bus-loads of tourists who visit Magome and Tsumago DO NOT realise, however, is that there is a remnant of the old Nakasendo Highway left between these villages that you can hike. It’s about 10 kms of path winding its way through deciduous forests, conifers and bamboo groves; alongside rivers and streams.  This, ladies and gentlemen, was the picturesque goal of our mission today.

Not an easy one to get to, but worth it, we thought. First, a local train to Nakatsugawa (90 minutes to cover 60 kms = SLOW), then find the bus stop and catch the #3 bus to Magome. Half an hour by bus up into the mountains and there you are in Magome. Yay! 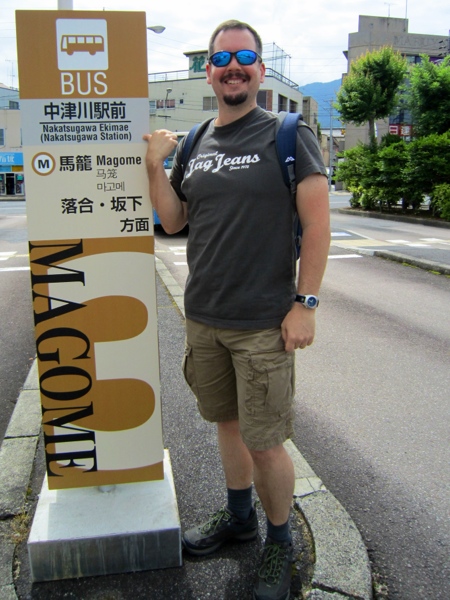 We made it to Nagatsugawa & found the bus for Magome – yay!

We even made it onto the right bus!

Once the bus deposited us in Magome, we had a wander through the village and fell in love. It was just SOOOOOO cute! The charm of the village was heightened by the fact that we had the place virtually to ourselves. 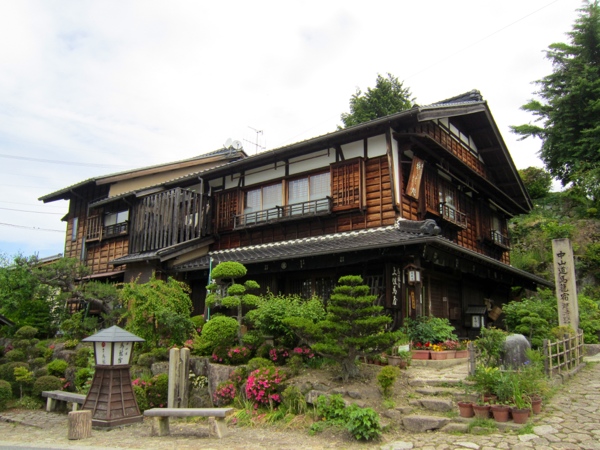 One of the restored houses in Magome.

Loving the streets of Magome.

From just outside the northern end of the village the Kiso Valley hike begins. As we started walking we bumped into an elderly Japanese couple who had also chosen this hot and humid day to do the hike. They spoke no English, but luckily Shane’s Japanese was up to the task and we had a great little chat about Japan, the places we had visited, and the Kiso Valley. This is where the conversation got interesting as the old gentleman warned us to “…be alert whilst on the trail because it is summer and quiet (i.e. few tourists), so we should be careful to avoid the mushi (bugs), mamushi (damn pit vipers again!), saru (monkeys), and kuma (bears)”.  That’s right people: BEARS!

What the hell? I mean, sure, we’re Australian and Australia has its fair share of bitey, nasty things to watch out for, but BEARS?? What on earth do we do if we meet a bear?? (Shane’s thoughts on the topic: RUN!). Apparently there are still a few hundred Asiatic black bears left in Japan, most of them in the Northern-most island of Hokkaido, but a few in central Honshu as well.  These guys are quite shy and cautious and SHOULD stay out of our way, the old Japanese gentleman informed us. The best way to keep them out of your way seems to be to make lots of noise, which is why there are big bells all along the trail that you can ring. As the sign said: “Against bears, ring bell hard”. Check it out – photos to prove we are not making this stuff up!

Shane being scared of bears.

OK. Sure. Bears. And monkeys. Oh, and don’t forget the PIT VIPERS. Suddenly our trek through the mountains didn’t seem quite so idyllic…. That’s OK, we thought, we can do this – be alert, not alarmed, right… Yeah right! That theory went right out the window when we saw an actual factual bear paw print! Suddenly ringing all those bear bells seemed REALLY important. Ring ’em loud, ring ’em long!! Then Shane thought he was really funny and started singing “If you go into the woods today, you’re in for a big surprise…” (you know, the Teddy Bears’ Picnic song), and cracking jokes about how the bells are actually dinner bells, letting the bears know dinner is on its way. Dinner in the shape of 2 fat, happy, juicy white people! Needless to say, I DID NOT find this amusing. But, being the adventurers that we are, with great trepidation, we continued our hike… 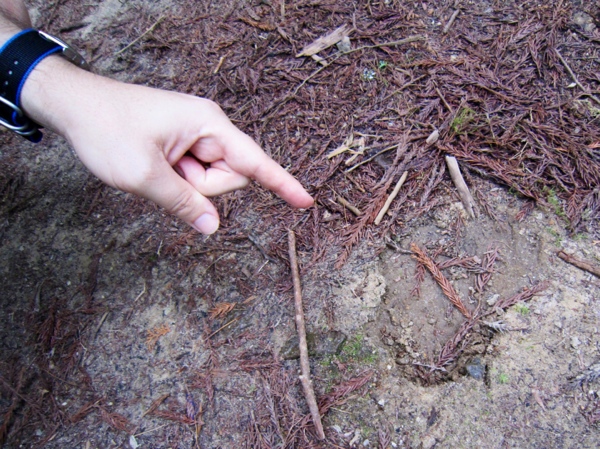 And man are we glad we did. No bear sightings (phew), but lots of bugs, a snake and some monkey poop; and, of course, some truly grand scenery. Wild Japan is awesome! 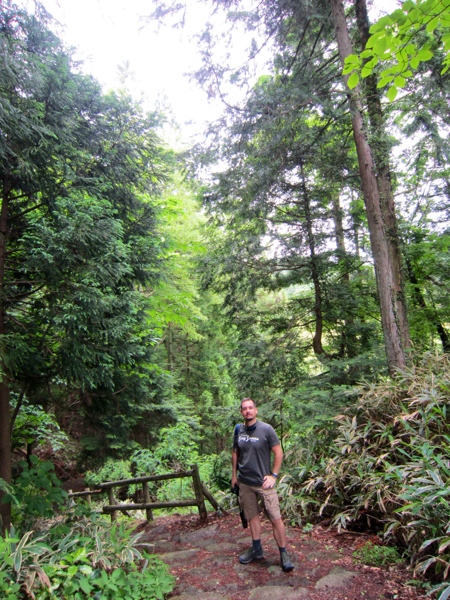 The very beginning of the hiking trail. 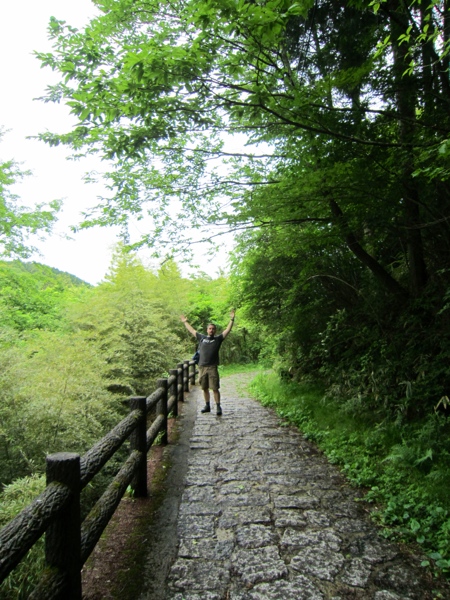 We walked along the cobbled remnants of the original Nakasendo Highway. 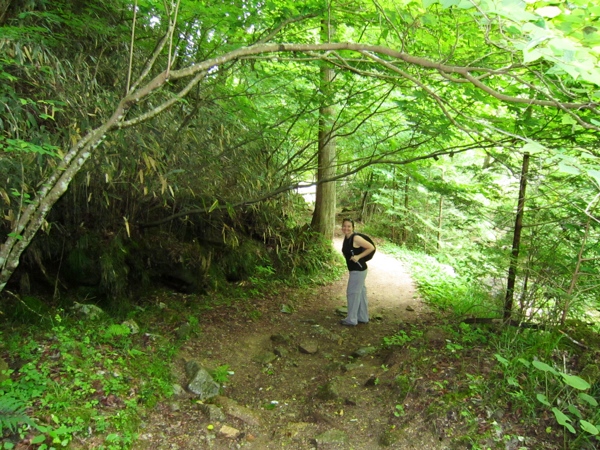 It was nice and cool under the canopy of forest green 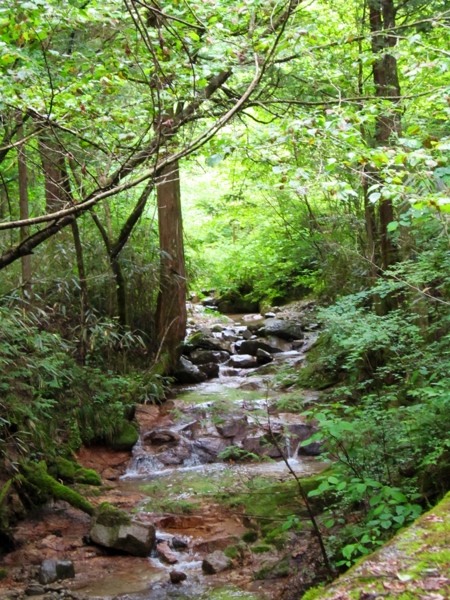 The trail followed along, beside mountains streams….. 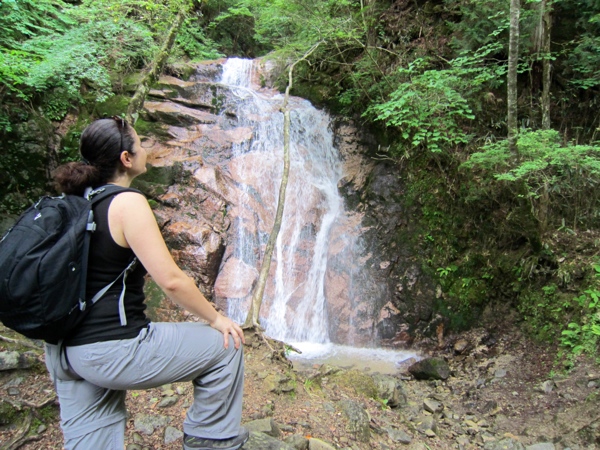 …and took us past waterfalls of crystal clear mountain spring water.

It was an awesome trek, despite the heat. The final stretch took us down through a cedar forest and into Tsumago. We had lunch in this pretty village (a simple bowl of ramen noodles in miso soup with fish and vegetables), and Shane got to practice his Japanese some more (no one spoke any English out here in the hill country).

The home stretch – the final bit of forest before coming into Tsumago.

Entering the village of Tsumago. 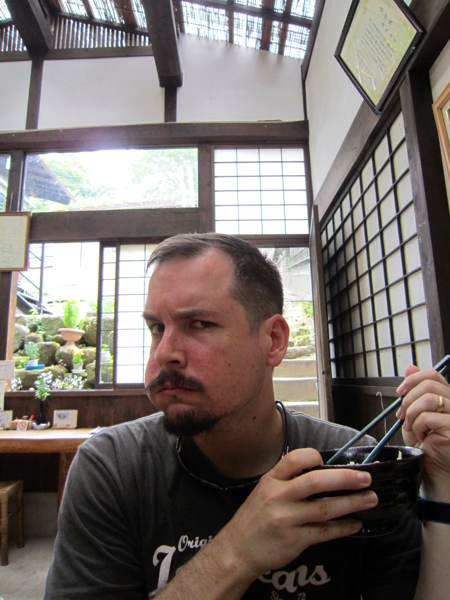 Lunch in Tsumago – Shane did not want to share his.

From here we had to catch a bus to the town of Nagiso to then catch a train back to Nakatsugawa, and then change trains for Nagoya.  Nagiso is only about 4 kms from Tsumago so we decided to walk it. The walk took us alongside rice paddies and through some of the tiniest farming hamlets ever. It’s amazing to think that even today, in neon-light encrusted, ultra-modern Japan, people still live so rustically in these mountain regions. We were really lucky that we made it to the train station in Nagiso just as the heavens opened up and the storm that had been looming all day finally arrived. It took us 2 hours to make our way home from Nagiso to our itty-bitty hotel room in Nagoya, where, after a well-earned shower and dinner, we crashed early – preparing for our next adventure in Japan….  Ja mata ne people (translation = until the next time)!