She says: We went to Hell’s Valley to see monkeys!

Today’s adventure was one we were both really looking forward to: we went to see Japan’s famous snow moneys! These cute critters live in the Jigokudani Valley, which is not an easy place to get to, that’s for sure! First we had to catch a train up through the mountains to the tiny town of Yudanaka (45 minutes from Nagano City), then catch a local bus to Kambayashi Onsen (just 15 minutes away, but waaaaaay out in the bush), then walk 2kms along a narrow path, through the forest, to reach the Jigokudani Yaen-koen (translation = Hell’s Valley Wild Monkey Park). It took us about two hours just to get there! Not that we minded, the isolation of the place (and the fact that it’s under metres of snow for 5 months of the year), is probably one of the things keeping it relatively free of hordes of tourists. Being summer, the place was REALLY quiet; we had a whole train to ourselves and the bus was all ours too. It was great! We even had the chance to chat a bit to the bus driver – he in stilted English, Shane in broken Japanese, me with wild gestures. It’s funny how few words you really need to communicate, at least at the most basic level; and everyone we’ve spoken to here in Japan has been so forgiving of our lack of language skills and social blunders. In that sense Japan is a very easy place to travel…., especially if you have a Shane who speaks and reads basic Japanese. *GRINS* 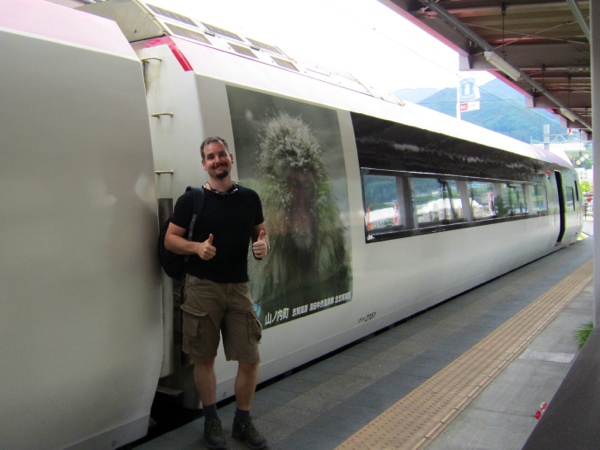 Step 1: Catch the snow monkey train from Nagano City to the tiny town of Yudanaka.

Enjoying our private train from Nagano City to Yudanaka. 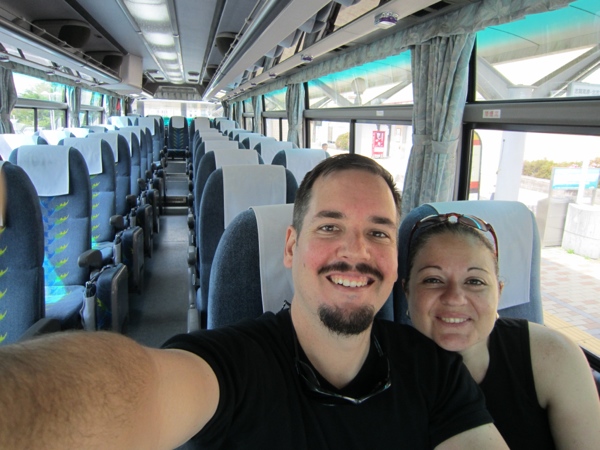 Step 2: Catch the bus from Yudanaka to Kambayashi Onsen. Actually, make that a private bus please. 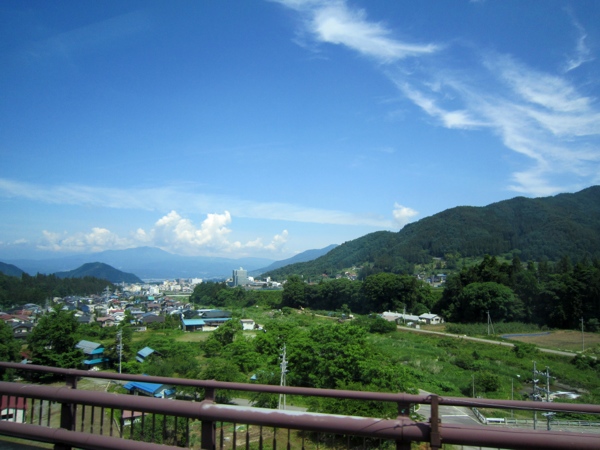 Enjoying great views of the country-side during our private bus journey.

Step 3: Walk about 2kms through the forest to get to the money park. 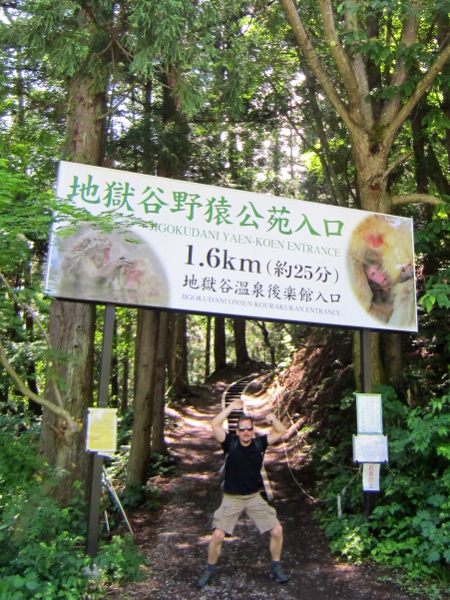 Shane getting very excited (in his usual monkey-like fashion) about going to Jigokudani Yaen-koen.

Jigokudani Yaen-koen, located 40kms north of Nagano City, is part of the Joshinetsu Kogen National Park. The name Jigokudani, meaning “Hell’s Valley”, refers to the sulphurous steam and boiling water that bubbles out of the ground in this area. We quickly realised this: the further up the forest trail we walked, the stinkier it got – gotta love that eggy smell! The whole area around Yudanaka is full of ski fields and onsens (translation = hot springs), making it a very popular destination in winter, I’m sure, but in summer most of the hotels and lodges are closed and the whole place was really quiet. All the more forest for us I say!

Walking through the forest to get to Jigokudani Yaen-koen. 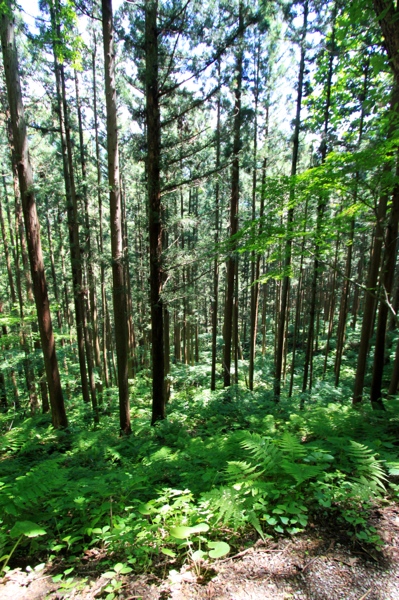 Enjoying our walk up the forested path

Train, then bus, then hike…two hours later we were finally there: Jigokudani Yaen-koen! This park’s claim to fame is its large population of wild Japanese macaques that go into the valley to bathe in the hot springs. I’m sure most of you would have seen them in documentaries, sitting in the steaming hot waters of the onsen  with snow piled up around them. Apparently they have been doing it since 1963, when the first clever monkey descended from the steep cliffs and forest around Jigokudani to sit in the warm water and eat the plants that flourish around the hot springs.

The Japanese macaque is a monkey species native to northern Japan, and is the most northern-living non-human primate, surviving winter temperatures of below -15°C. They have brown-grey fur, a short tail and red faces, hands and bums; with males weighing around 12 kg and females around 8 kg (smaller than a baboon, but bigger than most monkeys). In the wild they spend most of their time in the forest feeding on insects, seeds, fruit, berries, leaves and bark; in the park they spent most of their time swimming in the hot springs, grooming each other and posing for tourists like us. Interestingly they are considered particularly intelligent for monkeys and are often used in science experiments looking at learning and behaviour because they learn new things so effectively.

Special note: Japanese macaques and the “Hundredth Monkey Effect” (I love this story!)

In the 1970s, scientists studying the behaviour of Japanese macaques on Koshima Island left sweet potatoes out on the beach for them to eat, then witnessed one female washing the food off with river water, and later even dipping her clean food into salty sea water to “season” it. After a while, others started to copy her behaviour. This behaviour was then passed on from generation to generation, until eventually all members of the troop were washing their food and seasoning it in the sea. These observations are the foundation for what we know as the “Hundredth Monkey Effect”.

We certainly found them fascinating to watch. They are wild, but habituated to humans, so they don’t seem to mind at all if you walk right past them. The park wardens do warn you not to treat them as tame, however. There are lots of warnings about not feeding the monkeys, not eating or drinking while you are in the park (in case they snatch your food/drink away from you), and they warn you not to look them in the eye as this is a challenging gesture in monkey-land and can make them become aggressive. We got REALLY close to them though, all we had to do was sit there quietly and they made themselves comfortable around us.

Despite the heat they were dipping in and out of the hot spring water. Many were snoozing in the shade, or grooming each other. It’s easy to anthropomorphosise them – to interpret their behaviour as “human”….or is it really OUR behaviour that is so much like THEIRS? Either way it was just great to be able to sit a few metres away from these monkeys and observe their antics. The little baby monkeys, born just 3-4 weeks ago, were so cute! We found out that the mothers carry their infants on their bellies for the first 4 weeks only, after this time the babies get too big so they get carried around on Mum’s back.

We dubbed them “Soup Monkeys” because there was no snow around so “Snow Monekys” just didn’t seem apt. And the waters of the hot spring pool they bathe in was a rather soupy, pea-green colour….., so Soup Monkeys they became!

The monkeys were just a couple of feet away from us. This guy’s name was George.

This guy was happily snoozing on the rocks in the shade. We called him Fred. 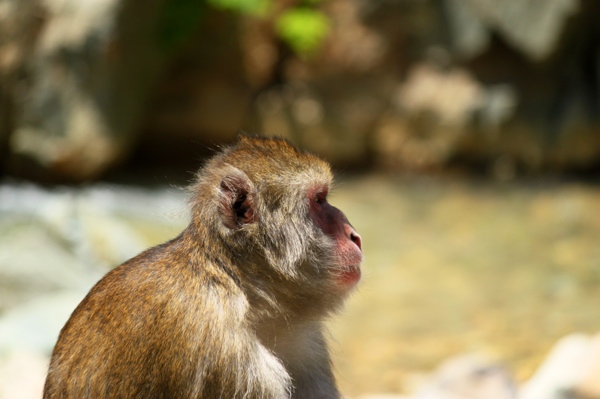 George again – the old simian that was all grey in the whiskers.

More snoozing in the shade. This monkey’s name is Sam.

We watched this matriarch take a dip in the pool and then sun herself. Her name is Jan. 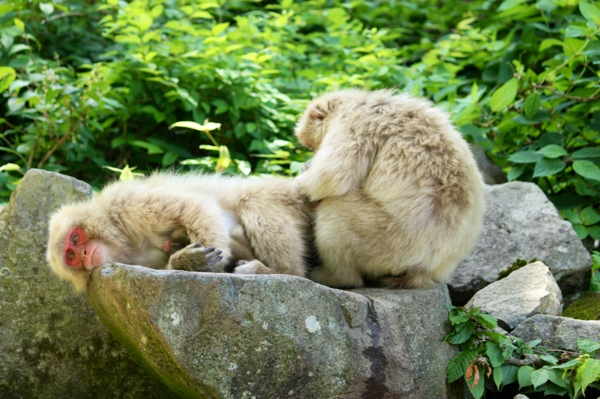 This little guy was only about 3 weeks old. We called him Ricky. Too cute for words!

On the way back down the mountain, we stopped for a drink and a snack of bananas (seemed fitting really), and soaked up some of the scenery.  There is a small geyser within the Jigokudani Valley that was continuously going of which was pretty cool. All in all it took about 2.5 hours to get back to Nagano City again, where we took ourselves out for dinner to another awesome little grill house and then slept happily dreaming of Soup Monkeys….

Enjoying views of the Jigokudani Valley as we had our bananas.

Watching the geyser within the Jigokudani Valley.