Our last day in Tokyo was a cacophony of colour and crowds.

Howdy fans! Today was our final day in this mega-metropolis; we wanted to end our Tokyo sojourn with a full sensory immersion into this city’s young, hip, cool and funky side. So we started with a pre-breakfast stroll to Akihabara. This area in Tokyo is renown for its electronic stores, video game arcades and multi-level stores dedicated to all things manga- and anime-related. Apparently today’s electronic stores are direct descendents of the post-WWII electronics black market stalls that used to be set up beneath Akihabara Station. What started as an illegitimate trade in radios and electronic components has grown into the world’s busiest electronics commercial hub, which is why Akihabara is often referred to as “Electric Town”. This is where thousands of computer geeks, gaming aficionados and comic book fans all come to hang out, swap trading cards, spend money and indulge their various electronic passions.

It was everything we expected! Thousands of people, whole streets of electronics and games shops, and hundreds of massibe billboard signs, each more colourful than the next. There was a whole bulding dedicated just to Sega games, and in the amphitheatre underneath the Sony building they were setting up for the PS4 launch concert. Most of Akihabara’s clientele were at least 20 years younger than us, but there were enough “grown-ups” (ahem…, that is to say, people over 30), that we didn’t feel too out of place.

Note: It is perhaps a little concerning to outsiders that our interest in cartoons and computer games puts us in the same crowd as fanatic 14 year old girls and legions of adolescent boys, but we’ve made our peace with the fact that, despite being almost 40, neither of us have fully embraced adulthood and cling happily to the label of “big kids”. Hence the outing to Akihabara. *BIG GRIN*

We checked out the Tokyo Anime Centre, but found it less inspringing than expected. The manga and anime shops however… wow! So much colour! So many key rings, hair clips, pencil cases, badges, stickers, posters, T-shirts, socks, pens, pencils, stamps, trading cards, DVDs, CDs, comic books…. There was even a whole floor in one of the multi-storey places where you could have your photo taken with life-size cardboard cutouts of your favourite manga and anime characters. Most of it was clearly marketed at teenage girls and adolescent boys, but the “adults only” floor was a little, errrr…., confronting shall we say. Japanese men (I assume it’s the men??) sure do have some, um,  inetersting fetishes. 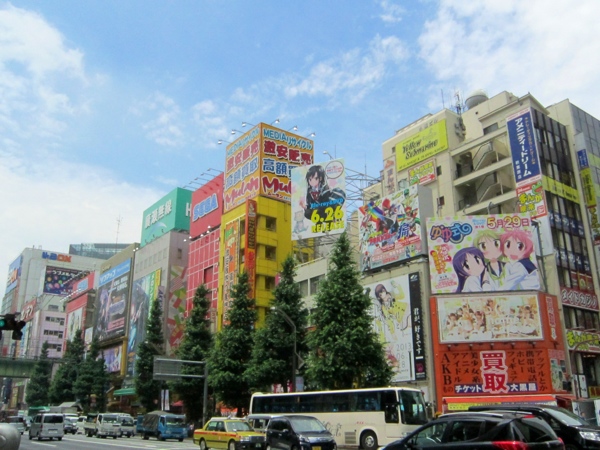 The main strip of electronics stores in Akihabara – so much colour! 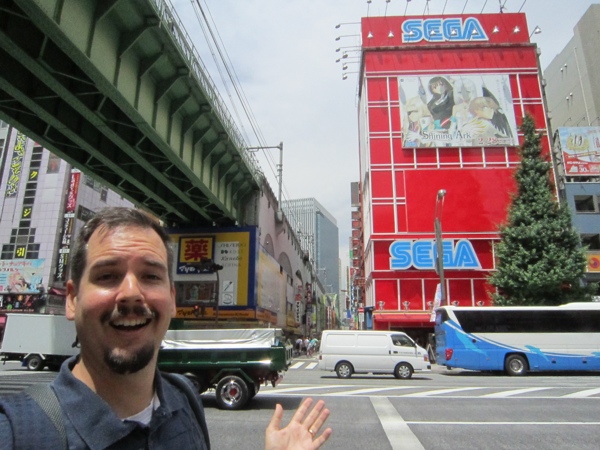 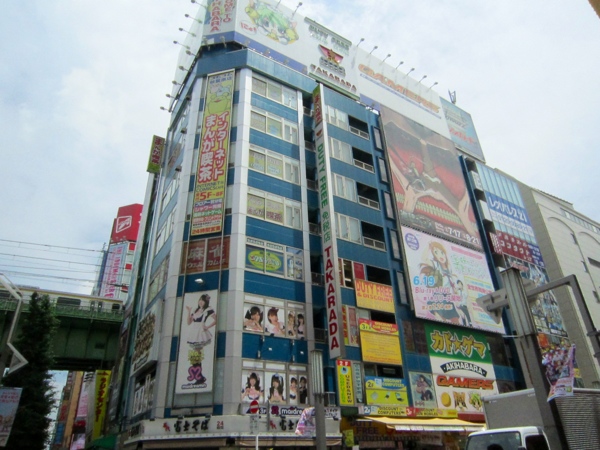 Special note: An introduction to manga and anime for the uninitiated

Essentially manga are Japanese comics, and anime are animated cartoons. Anime is usually, but not always, the animated version of popular manga. Shane and I have been keen anime fans for years since we first stumbled across “Urotsukidooji” (translation = “Legend of the Over-Fiend”), an animated series set in a crazy post-apocalyptic world. In the West the best known anime cartoons are things like “Speed Racer” and “Astro Boy”, both TV series made in Japan in the late 1960’s. The 1980’s anime movie “Akira” is also pretty well known, though there are literally thousands of anime movies and TV series. My personal favourite, and in fact one of my favourte movies OF ALL TIME, is Studio Ghibili’s “Spirited Away”.

There are hundreds of different genres of anime and manga, covering a huge variety of subjects – from cutesy stories about highschool romances and “Glee”-style pop culture, to seriously disturbing stories about paralell universes where demons rule the Earth or vampires stalk human prey. Anime cater to adults or children, as opposed to Western cartoons and comic books which are generally just for kids (except for the odd animated movies like “Shrek”, where animators have realsied that kids often go to the cinemas with their parents, and if you add in a few jokes for the adults too, you’ll double your viewing audience). They are often stylistically drawn and can have plot lines that MAKE SO SENSE (at least not to a Westener like me!), but they are often really clever and interesting, and they certainly don’t shy away from exploring topics and concepts Hollywood movie studios wouldn’t dream of touching on. One of my favourite things about anime movies and series is that there is no “formula”; the stuff is out there and it’s original – something sadly lacking in a lot of Hollywood cinema.  Be warned though: this stuff isn’t for the faint-hearted – a lot of it will give you nightmares like you never knew you could have! 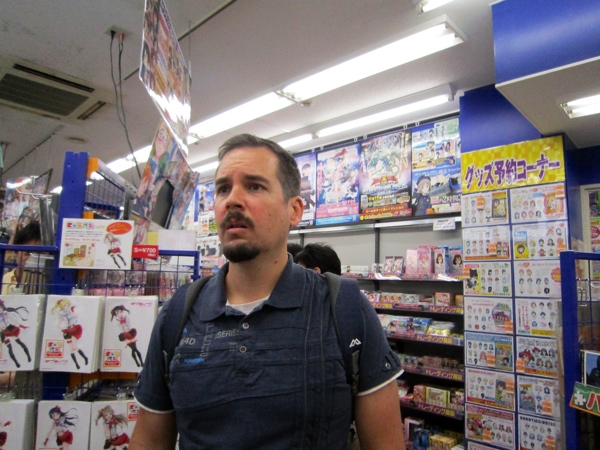 “They have a cartoon about THAT? Really??” says Shane, slightly traumatised by what he was seeing.

Even the inside of the lift was covered in giant posters of anime characters.

“I need to get out of here now please.” begs Shane, in the lift on the way down from the “adults only” floor.

After we’d gorged our senses in Akihabara we decided to catch the subway across to Harajuku for lunch and some of the best people watching EVER. Harajuku is another cool, hip, “young” centre in Tokyo; since the 1960s it has beena centre of experimental fashion and has been the birthplace of many Japanese pop culture trends. Made famous in the West by pop icons like Gwen Stefani, Harajuku is also the center of Japan’s most extreme fashion styles. One of the more famous strips, Takeshita-dori (Takeshits St), is lined with boutique clothing stores, where bespoke fashion is all the rage. Being a sunny, warm day, it was also jam packed full of people; man what a buzz!

The overpass just near Harajuku Station was also crowded; packed with groups of Japanese teens and 20-somethings dressed to the nines as Gothic-style punk rockers, frilly-skirted Lolitas, and everything in between. We had lunch at a great little Italian restaurant nearby, elevated just enough from street level so that we could people watch unobtrusively. I can’t imagine how many hours it takes some of these girls (and guys) to get dressed up like that; that is serious commitment to “a look”! In our Birkenstocks and daggy travelling clothes we SOOOOO did not fit in, but it was really cool to soak up some of that ultra-funky Harajuku vibe. 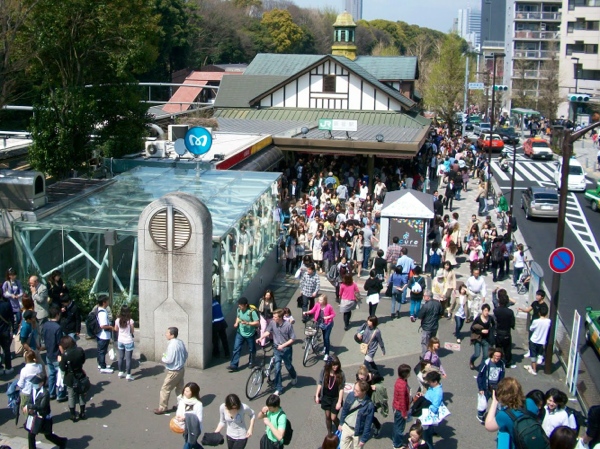 Strolling down Takeshita Street in Harajuku – with about a million of our new friends.

Harajuku fashion at its finest. 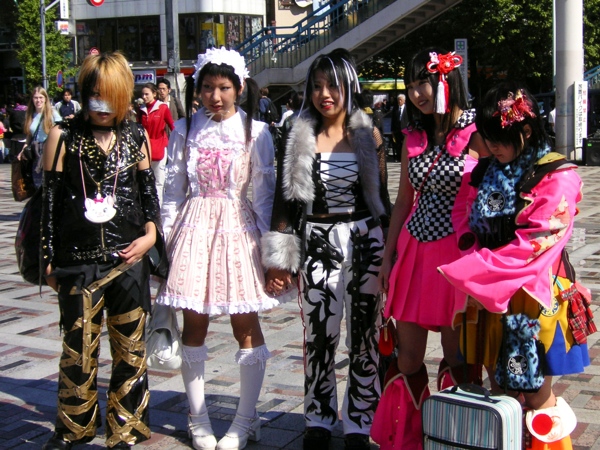 It must take hours to get this dressed up!

For a change of pace from all the teenage insanity, we sought out Yoyogi Park  This is one of Toyo’s many green spaces, and its largest. A green leafy oasis in the middle of all the chaos.  The park was used after WWII to house military personnel, and, in 1964, to accommodate the athletes for the Tokyo Olympic Games. The Yoyogi Stadium was, in fact, the main Olympic stadium, now used for sporting events and concerts. We had a lovely, leisurely stroll through the park, enjoyed an ice cream and just watched all the families and groups of friends having picnics on the grass, playing frisbee and soccer, or just relaxing in the sun. We’ve noticed that Tokyo has a lot of green space slike this, many of them large enough that you actually lose the noise of traffic and the city. It must be so wonderful for people who live in the city to have spaces like Yoyogi Park to retreat to when they need some “green time”. 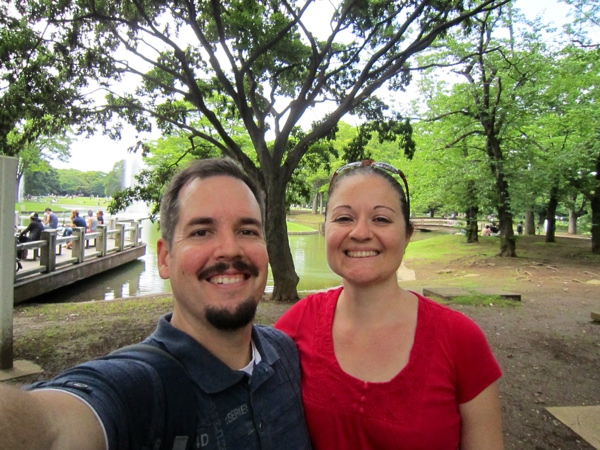 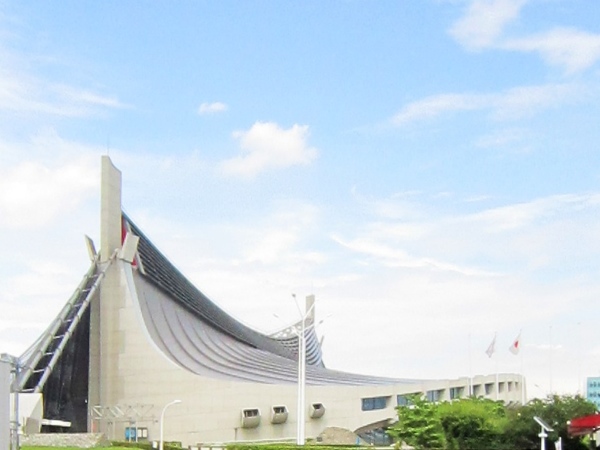 Yoyogi Stadium was used as the main Olympic Stadium in 1964 when Tokyo hosted the games.

From Yoyogi Park, we continued walking North towards Shinjuku Station, and visited Meiji-jingu (Meiji Shrine).  This is Tokyo’s premier Shinto shrine, built within a lush green parkland as a memporial to Emperor Meiji who died in 1912. The shrine was a peaceful, serene place, despite all the vistors we were sharing the space with. We lingered a little in the parklands surrounding the shrine and enjoyed the cool shade afforded by the verdant forest, until we felt recovered enough to walk back into Shinjuku and brave the crowds once again to catch the train back to our ‘hood.

One of the o-torii gates, marking an entry into the Meiji Shrine.

The parklands surrounding the Meiji Shrine.

The Meiji Shrine itself was quite humble, a peaceful and senere spot within this immense city.

It was an awesome final day in Tokyo – full of colour and sound and chaos, just as we had hoped! For our last evening in Tokyo we decided to treat ourselves and went out for dinner to a “fancy” restaurant where we had to take our shoes off and got shown to a private booth. “This is nice,” we thought. The waitress then gave us each a menu and an iPad and, errrrr…., disappeared. The iPad thingy had all sorts of buttons and pictures of food all over the screen, with plenty of useful instructions IN JAPANESE. It took Shane a while to decipher the important bits of Japanese writing, but we worked out that we had to place the order ourselves on the iPad. No waitress; we just press the right buttons on the touch screen and the order would magically be transmitted to the kitchen, from whence our food would appear. Sounds like a great system, except for the fact that all the buttons and menus on the iPad thingy WERE IN JAPANESE. No nice lady to ask questions to. Wild gesticulation (my main form of communication in Japan) ain’t going to work with a machine, now is it??

Once again, Shane did a marvellous job deciphering/guessing the Japanese menu that we were able to place our order (took us about 20 minutes though). We weren’t really 100% sure what we’d ordered however until the food came out. Luckily we’d guessed right (mostly) and dinner turned out to be awesome! Salads, lots of meaty bits grilled on a stick, some gyoza (translation = dumplings of awesome) and a good serve of edamame (translation = tasty boiled soy beans). Not bad for a couple of amateurs! Seems even ordering a meal in Tokyo ain’t like anything we’ve seen before.

Errrrr…, and what exactly do we do from here?