A day trip to Lake Shikotsu has us climbing the hills!

Greetings fans! Today was our last full day in Japan and since we haven’t done a decent 10km hike in a while, we thought we’d take the bus down to Lake Shikotsu (Shikotsu-ko) and go trekking through the Hokkaido wilderness. Shikotsu-ko is one of 3 lakes within the Shikotsu-Toya National Park, which is reportedly one of the prettiest lakeland and mountain areas in Hokkaido. Surrounded by volcanoes, some of which are still active today, Shikotsu-ko is Japan’s second-deepest lake (363m maximum depth), and is home to a wide variety of fresh-water fish. The water is crystal clear and incredibly blue; unfortunately it is way too cold for swimming, with the average water temperature hovering around 5C – even in summer! Interestingly, due to its small surface area to depth ratio, the water temperature of the lake remains quite constant throughout the year, making it the northernmost perennially ice-free lake in Japan.

On the lake-shore closest to Sapporo there is a tiny village (Shikotsu-ko Onsen) that you can get to by public transport. So, all prepared for a day of trekking and adventuring, we got up nice and early and caught a train from Sapporo to the nearby town of Chitose (30 mins), then a bus from Chitose to Shikotsu-ko Onsen (45 mins). Only problem with getting to the lake early is that it was COLD and still quite cloudy. We had a quick look around the lake anyway and fell in love with it straight away – it was soooo pretty. 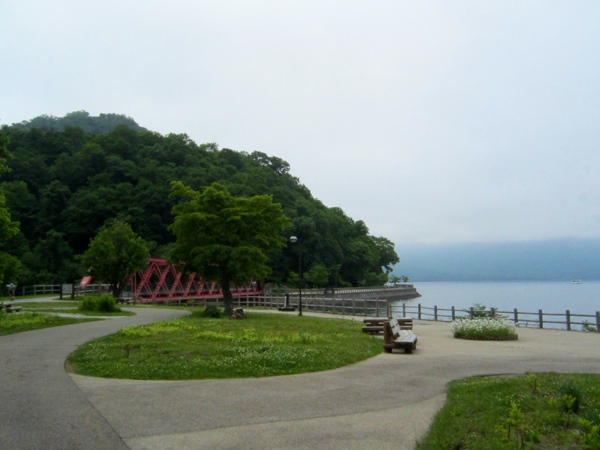 The lakefront of Shikotsu-ko is very pretty, if a little chilly first thing in the morning. 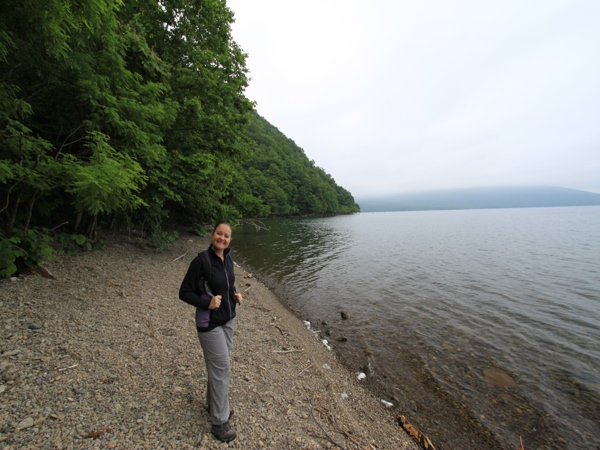 The waters of the lake are crystal clear but very cold. 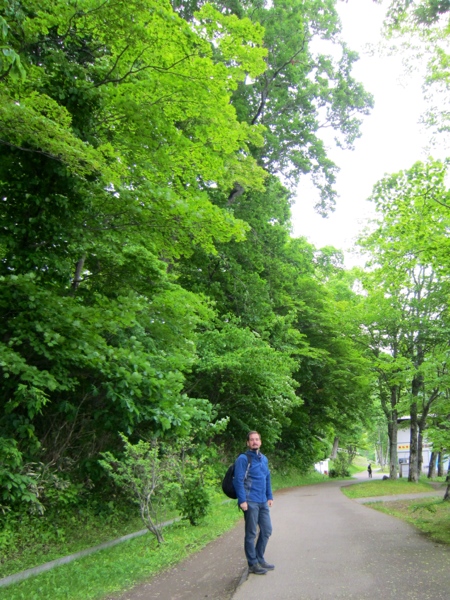 We arrived at Lake Shikotsu well before the weekend crowds, so we had the place virtually to ourselves for the first hour or so.

We pretty quickly decided it was still too chilly to go climbing mountains, so we bought ourselves a coffee and some biscuits at the local bakery and sat in an almost sunny  spot, waiting for the clouds to lift and the day to get just a tad warmer. While we were basking in the warmth of the almost-sun, a slithering friend joined us, also trying to warm himself (maybe herself – not quite sure how to check for gender on a snake). We found out later this was a non-venomous Japanese Rat Snake, but being from the land of Aus where all things crawly and slithering are to be viewed as deadly unless proven otherwise, we gave him/her a wide berth anyway. 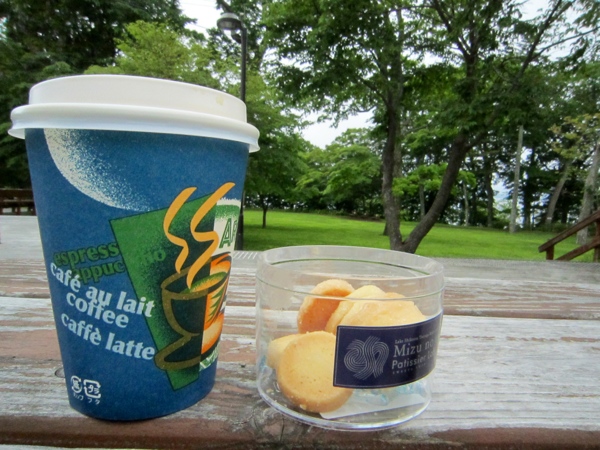 We walked around the lake for a little while before deciding it was too cold to do much but enjoy a hot cafe-au-lait and some freshly baked biscuits. 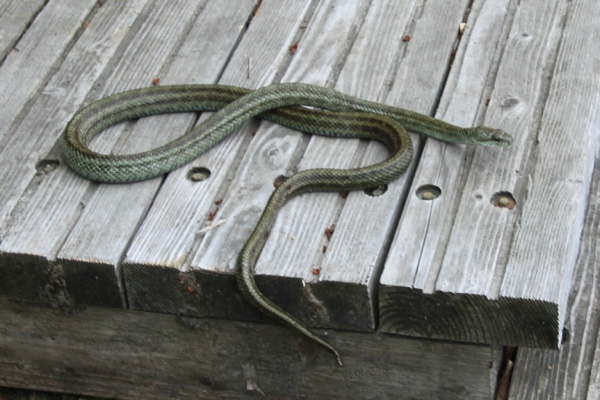 The friend that joined us, also seeking some morning warmth.

The Visitor’s Centre at Shikotsu-ko Onsen had lots of information about the animals in the area – including info about the apparently plentiful birds, snakes, bears, foxes and raccoon-dogs that are found in the national park (that’s where we found out about our Rat Snake friend). There we found a pamphlet and map outlining the hike up nearby Mt Monbestudaken; the brochure says (and I quote): “…it is an easy walk up this gentle mountain which is highly suitable for families.” We read that, looked at the map, and shrugged, thinking, “Sure – why not?!”. So off we went, for “an easy walk” up Mt Monbetsudaken… Ha! Easy walk indeed! They need to amend the wording in their bloody brochure to something like: “…it is NOT an easy walk up this mountain. This walk may be suitable for families IF YOU ARE A FAMILY OF SUPER-FIT, MAD KEEN HIKERS.”

Special note: Hiking in Japan is not for cream puffs

Look, I am the first one to acknowledge that I am soft. Totally soft. I have had a cushy desk job for the last 7 years and am NOT a mountain climber or mad keen hiker. So I’m sure many other people would not have found walking up Mt Monbetsu-daken all that challenging; but for this little cream puff that was NOT an easy walk! Suitable for families?? Maybe Japanese families! Actually, that does make sense when I think about all the people we’ve seen on the walks and hikes we’ve been doing. During all the walks we’ve done in this past month we’ve often shared the trails with 90 year old Japanese grandmothers and grandfathers, mums with babies strapped to their backs and families with little kids in tow. It seems that Japanese people who are into hiking and walking are REALLY into it, and are generally quite fit and active. So maybe the brochure should read: “…it is an easy walk up this gentle mountain which is highly suitable for JAPANESE families; IF YOU ARE A WHITE CREAM PUFF, HOWEVER, EXPECT THIS HIKE TO HURT…ALOT.”

It was 5km up to the top of this 866m mountain and the road up was seriously steep. At one point, about a quarter of the way up, we looked up at the mobile phone towers at the top of the peak, and seriously reconsidered our choice. Being the committed little cream puffs that we are, however, we pressed on… 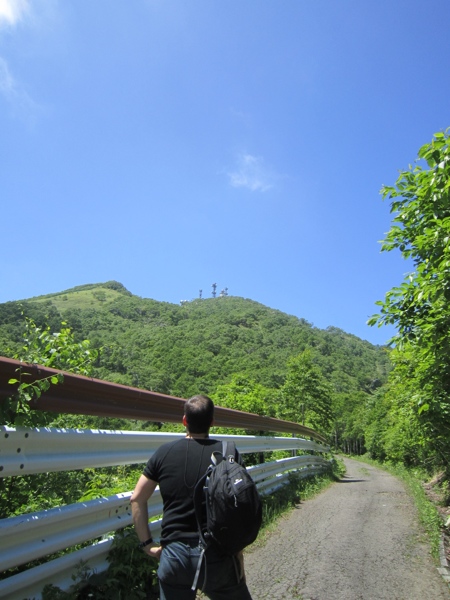 See those tiny little mobile phone towers? Well, that’s where we were headed…

It was a hell of hike; not because of the distance, but just because of how steep bits of it were. The views along the way were awesome though – we could see all the way back down to Shikotsu-ko Onsen, and across to the other volcanic mountains that surrounded the lake. The views were spectacular enough to push us onwards and upwards! 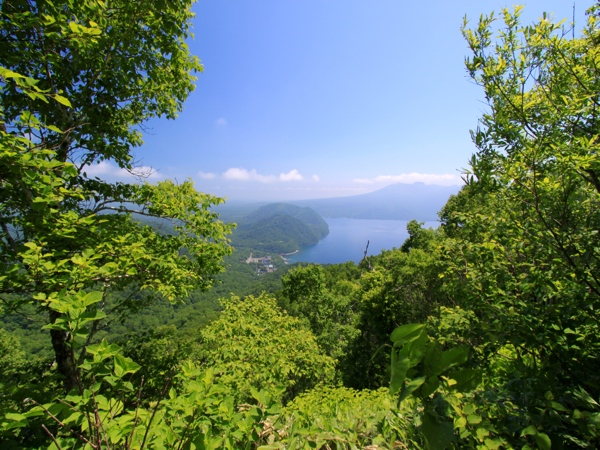 One of our first glimpses back down to the village of Shikotsu-ko Onsen. 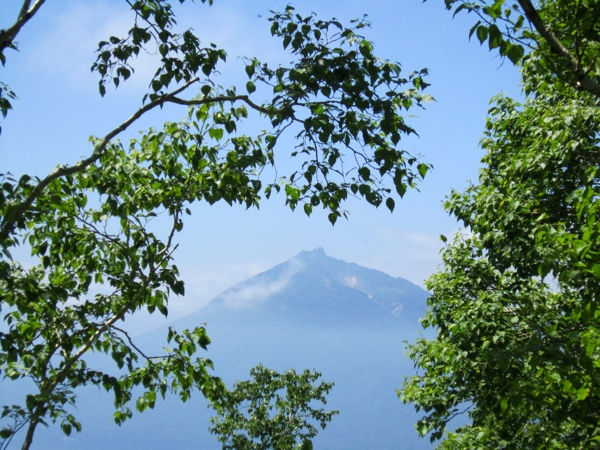 Views through the forest to neighbouring volcanic mountains.

By the time we reached the summit we were pooped, and so just sat and enjoyed the views and fresh alpine breezes for a while, snacking on some nuts. By this point the sun had come out, the clouds had all but disappeared, and the entire national park was visible from our perch. It was truly spectacular and well worth the trek. 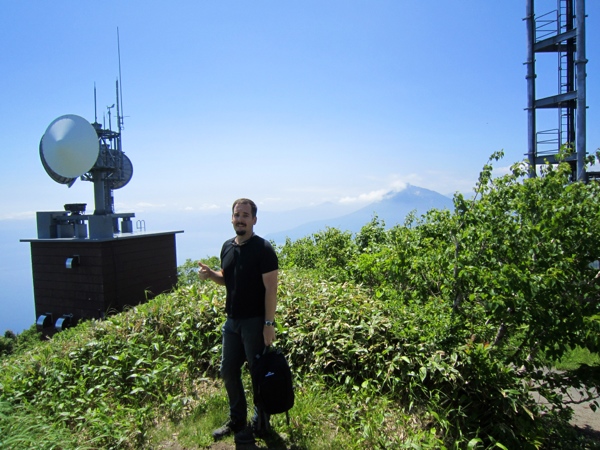 We were pretty fatigued by the time we made it to the top. At first we barely registered the views… 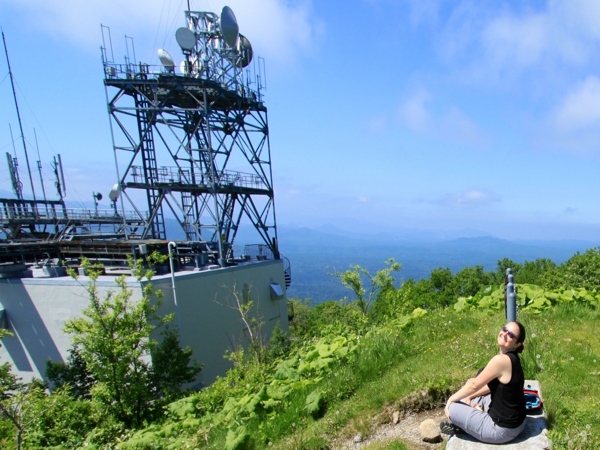 ….a snack and some water soon revived us though so that we could appreciate the view. 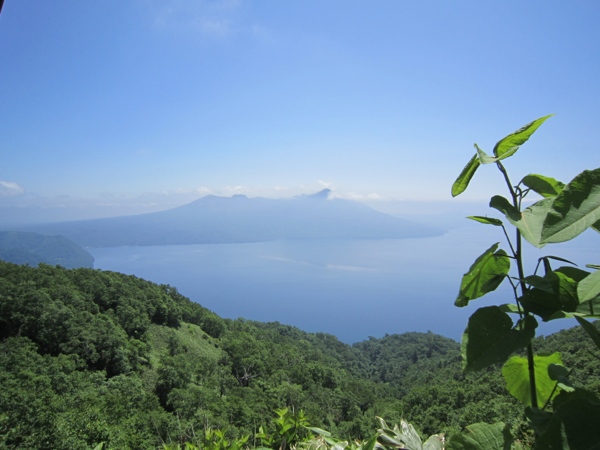 We could see see for miles and miles in every direction…. 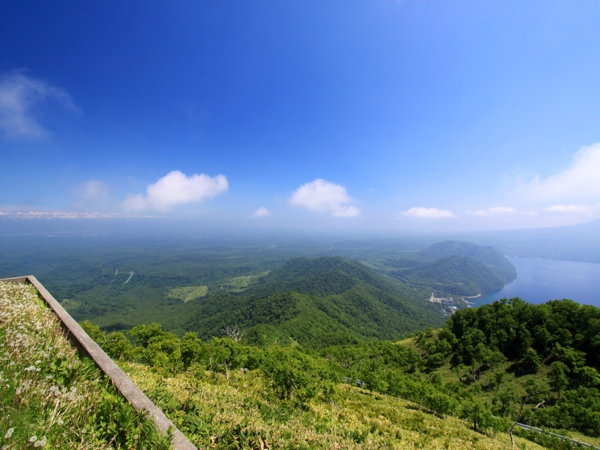 ..including all the way back down to the village we had come from. Ahhh… the magnificent view from the top of Mt Monbetsudaken. 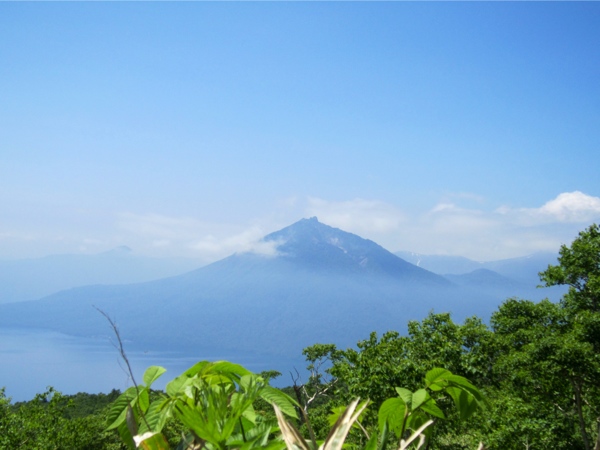 From the top of the mountain we could see all the way across the national park. 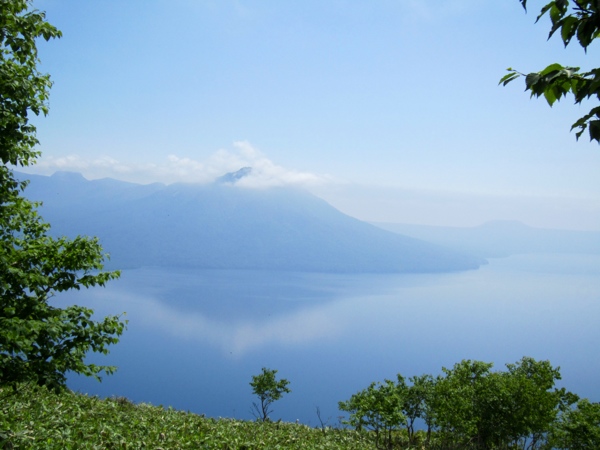 It was clear enough that we could see the mountains reflected in the lake’s surface. 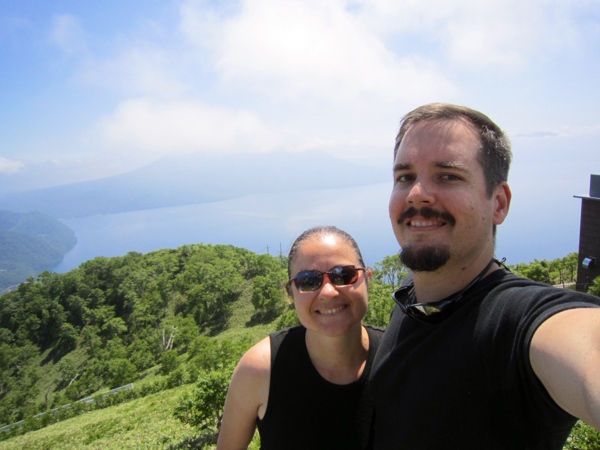 We were pretty chuffed with ourselves for making it all the way up.

The walk back down was much easier (though no less spectacular), and we were soon seated at one of the 3 little restaurants in Shikotsu-ko Onsen enjoying a well earned plate of rice, cabbage and ton-katsu curry. Ice cream for dessert and another stroll around the lake rounded off our day, leaving us well fed and very satisfied with our final day in Japan. 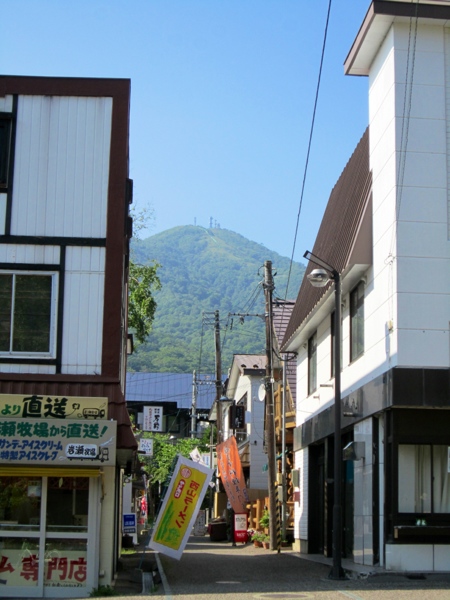 Back in Shikotsu-ko Onsen. We had lunch at the little restaurant on the left. By the way, can you see the tiny little mobile towers at the top of the hill there? We were there man! 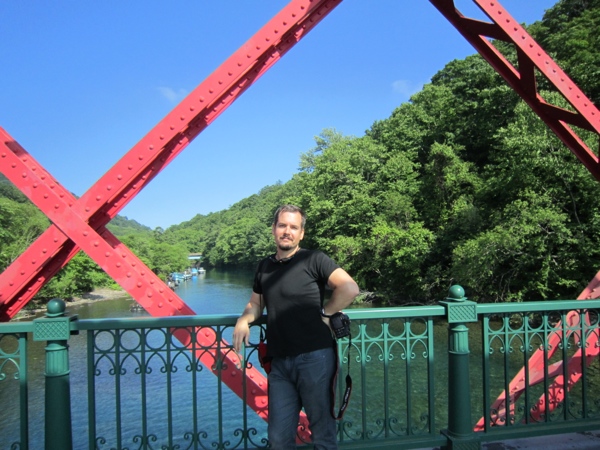 We went for a quick stroll around the village and along the lake after lunch, enjoying the sunshine and FLAT GROUND. 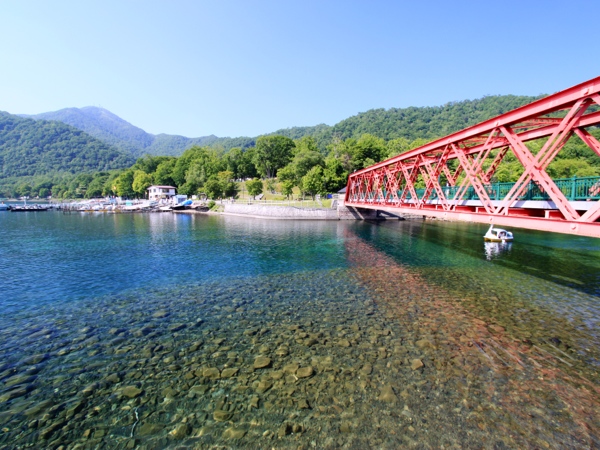 The lakefront was beautiful, with the sun out and the water sparklingly clear. 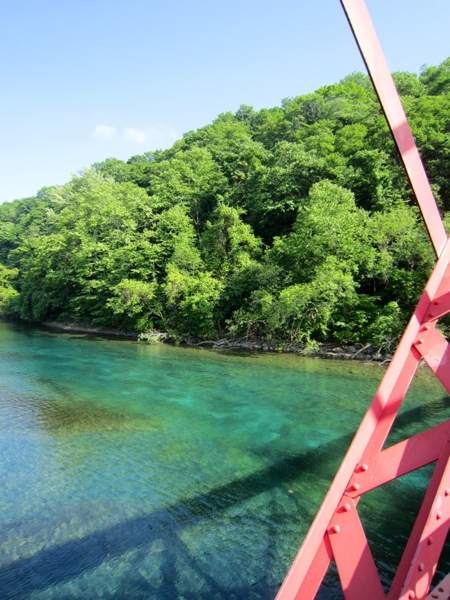 Up close the water was the most amazing aquamarine blue. 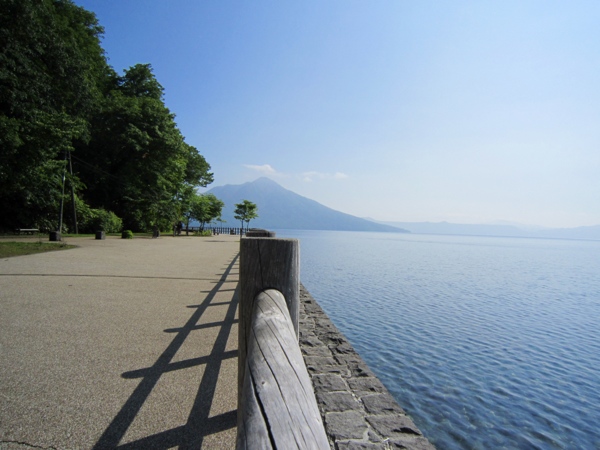 A fantastic day’s outing to Lake Shikotsu. Thumbs up all ’round!