We survived our first full day in Russia – woo-hoo!

We took it pretty easy today; both of us are still a little jet-lagged (we were awake by 4:00am Moscow time this morning, partially due to the fact it felt like 9:00am Seoul time and also due to the sun streaming into our room), and there were enough sights and activities in and around our hotel to keep us entertained for the day.

To give you some sense of orientation: Moscow is essentially built in 4 concentric circles, with the Kremlin at the heart of the city. The inner-most circle, Bulvarnoye Koltso (Boulevard Ring), marks the location of the original city walls of Moscow, from the 12th century. Most of the historical sites are contained within this compact centre (we’re heading there tomorrow and Monday with our tour group). The second concentric circle is the Sadovoye Koltso (Garden Ring); this was where the walls of an expanding Moscow were moved to in the 16th century. The third ring is far more modern, built in the 1990s as a highway “ring road”. As Moscow has brown, the fourth concentric circle has been built. Just finished recently, the fourth ring is a massive 14-lane highway (7 lanes each way) that links all the outlying parts of this massive city (Moscow is one of the largest cities by area – 2500 square kilometres!).

As you can see on the little map below, our hotel is between the third and fourth ring roads. We are a fair way out of the historical centre (too far for these little jet-lagged cabbages to venture on their lonesome), so for today though we focussed our solo efforts on Izmailovo – the area immediately around our hotel. 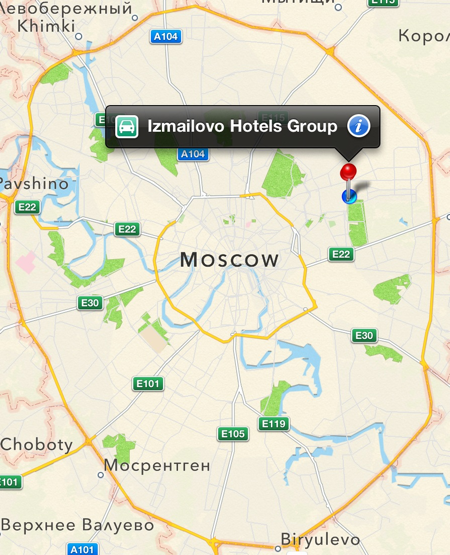 The ring roads of Moscow. Only the third and fourth ring roads are clearly visible here in yellow, but our hotel is clearly marked (we’re about 25km from the city centre). You can see the Moskva River dissecting the city in half too.

Izmailovo is a suburb of Moscow famous for its park: Izmailovo Park. This 3000 acre forest is one of the largest city public parks in the world. We have it at our doorstep (nice view hey?!) and can confirm: it is huge! The park was originally the estate of the Izmailovo boyars (a minor branch of the the Romanov family), but was converted to public space after the Russian Revolution of 1917. The castle and church, originally built in 1664, have been maintained as a tourist attraction since. They’re small by comparison to the sites we’ll visit in central Moscow, I’m sure, but it was great to see something so uniquely Russian up close – especially the “onion domes” of the church, which are so uniquely synonymous with the Russian Orthodox faith. 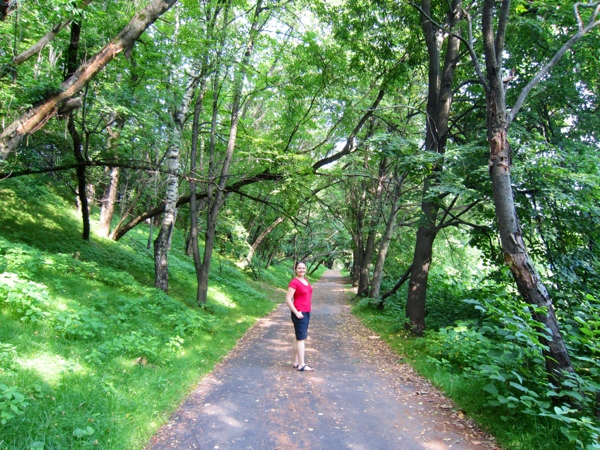 Strolling through Izmailovo Park (only recommended in broad daylight, especially for beginners). 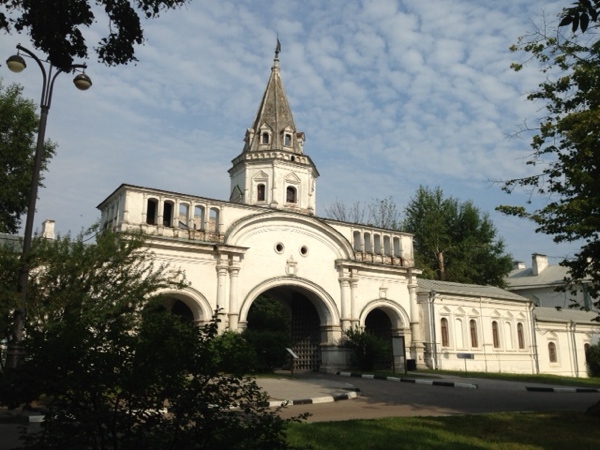 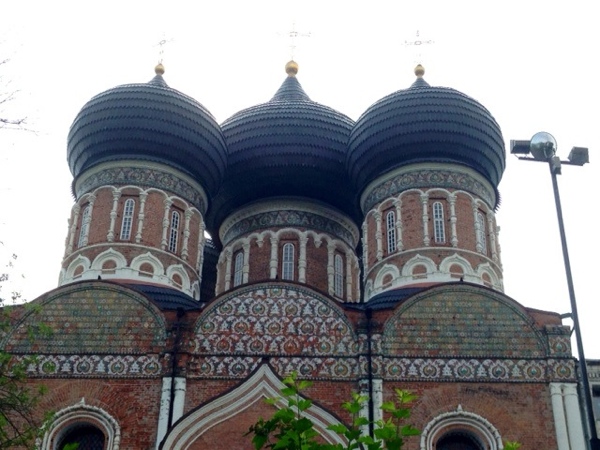 The classic “onion domes” of the Russian Orthodox church, once part of the Izmailovo estate.

The wonders of Izmailovo don’t stop there though… In one corner of the park, land has been cleared and two of the worst/best (depending on your tastes and perspective) tourist attractions ever known to man have been built:

Being the tourists that we are, we visited them both. *GRINS* 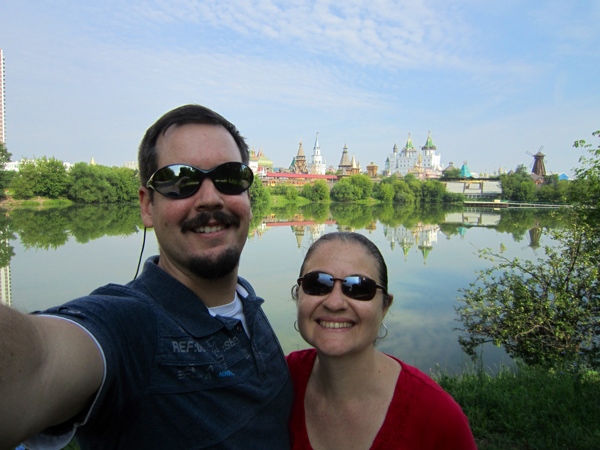 Us being good tourists and heading over to see the Izmailovo Kremlin Wedding Wonderland & The Izmailovo Flea Markets.

The Izmailovo Kremlin Wedding Wonderland is a oober-naff mini-version of the Kremlin, built out of timber and painted bright colours. It serves a dual purpose: a wedding venue for those with gaudy tastes (we accidentally gate crashed just such an event going in there this morning – oops!), and a tourist attraction complete with souvenir shops and over-priced food stalls when there are no weddings on. Hideous, and yet so cool….like an awesome Eurovision song – catchy, colourful, sparkly, but ultimately lacking in talent and substance. 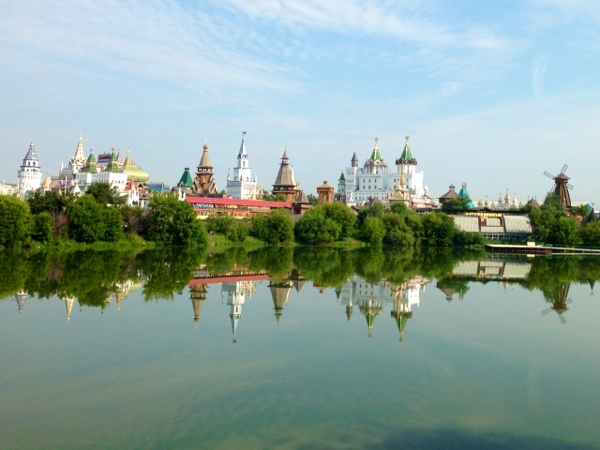 The beauty of the Izmailovo Kremlin Wedding Wonderland belies its kitsch underbelly. 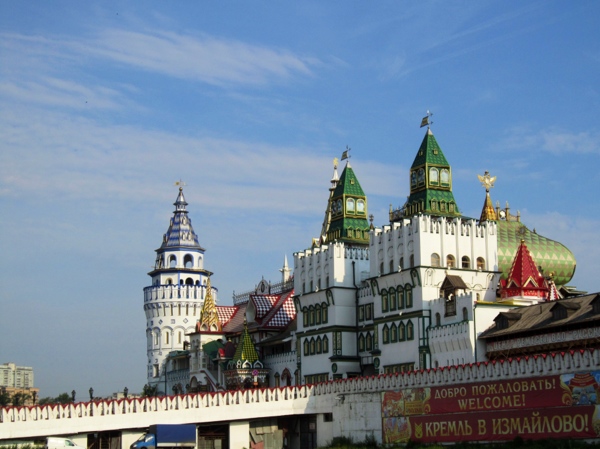 The pleasure/pain of the Izmailovo Kremlin Wedding Wonderland. 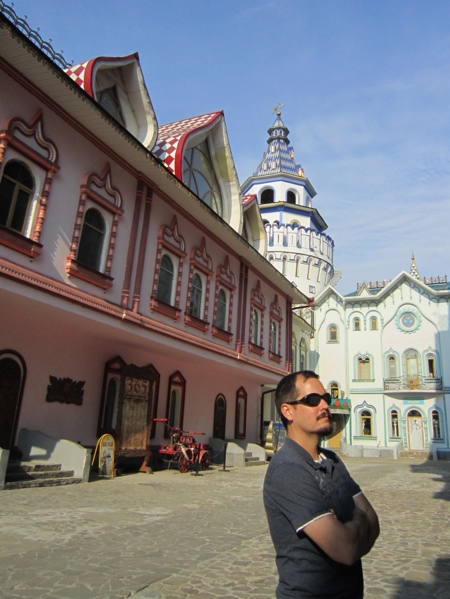 Shane did not love the Izmailovo Kremlin Wedding Wonderland.  What’s not to love I ask you??

After the joy/disappointment of the Izmailovo Kremlin Wedding Wonderland, we strolled over to the flea markets. These are reportedly the largest open air markets in Russia, with over 6000 stalls selling everything from antiques and clothes, to animal furs and kitsch souvenirs. What can I say? Russia: so bad, it’s good!

Matryoshka dolls for sale at the Izmailovo flea markets. 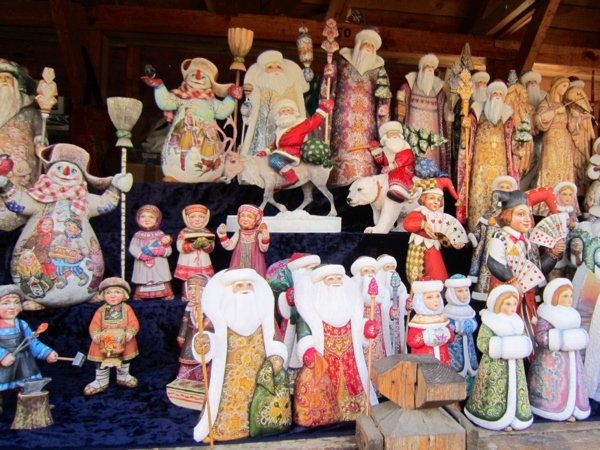 Hand-crafted Christmas ornaments from the Izmailovo markets have a distinctive Russian look to them. 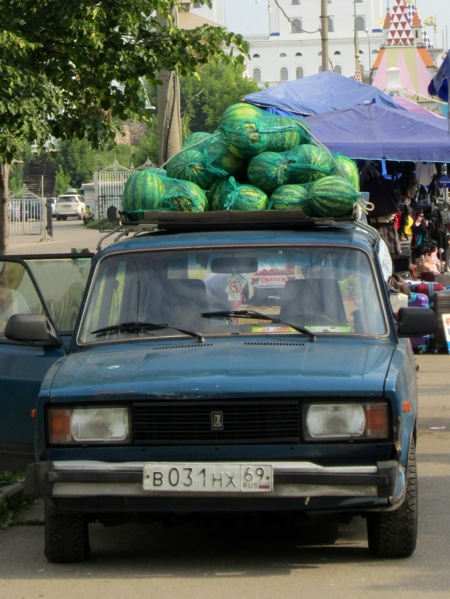 Impromptu watermelon stall (aka: car) at the Izmailovo flea markets. 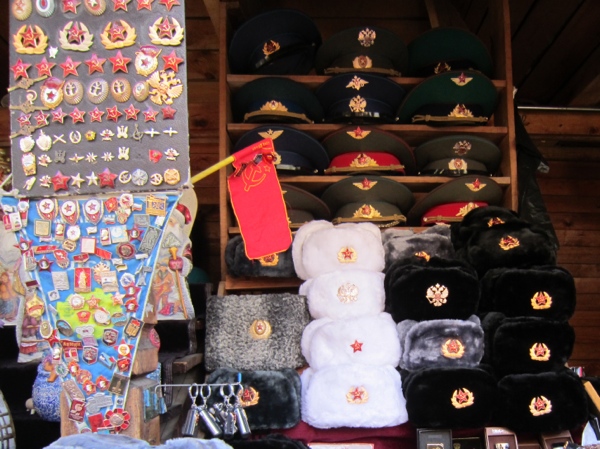 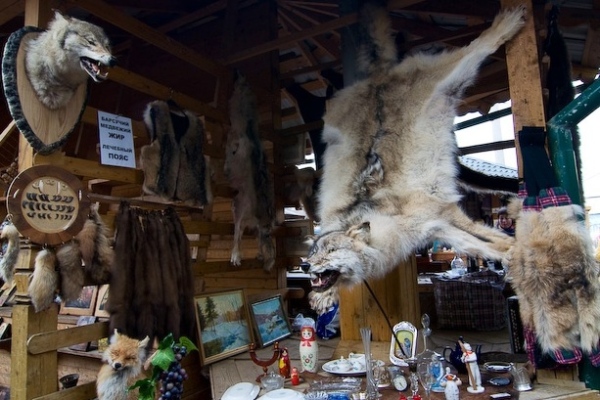 Wolf pelt anyone? Need a wolf pelt for your lounge room floor maybe?

After lunch and a bit of a nap we hung around our hotel for the afternoon reading and trying to get used to it being 5 hours earlier than our bodies think it is. Luckily our gargantuan hotel is big enough that it kept us fairly entertained for the afternoon, though it has a bit of a “1980’s cruise ship” feel to it (like “The Love Boat” meets “Dynasty”). Our room decor is a bit 1980’s too, though it is impeccably clean and HUGE compared to what we were used to Japan – we even have a king size bed! Mind you, they probably need giant beds here in Russia coz we have definitely noticed that most Russians are big. Tall, broad and just generally BIG. I am not longer a giant like I was in Japan; in fact, I am not even short in Russia – I am a midget! *SIGH*

We found out today too that coffee is 3 times the price of beer and about 5 times the price of vodka in Russia. We had 2 cappuccinos and just about keeled over when the bill came to 330RR ($11.00AUD), especially when Shane’s 500mL of beer at lunchtime cost him 100RR ($3.30AUD) and we’ve seen vodka for 200RR ($6.60AUD) per litre! The key seems to be to drink the alcoholic stuff only and leave the coffee for the tourists (ahem). (Shane’s excuse for “needing” a beer with lunch, by the way: “But you can’t drink the water here [true], and I need to quench my thirst [also probably true]. The only option in beer [not true… well, kind of, at least nasty bugs can’t grow in anything alcoholic].”)

Anyway, gotta run – we’re meeting our tour group and guide tonight after dinner for our introductions and briefing. Will let you know who we’re sharing the next week with tomorrow. Do svidaniya from Moskva  blog fans! 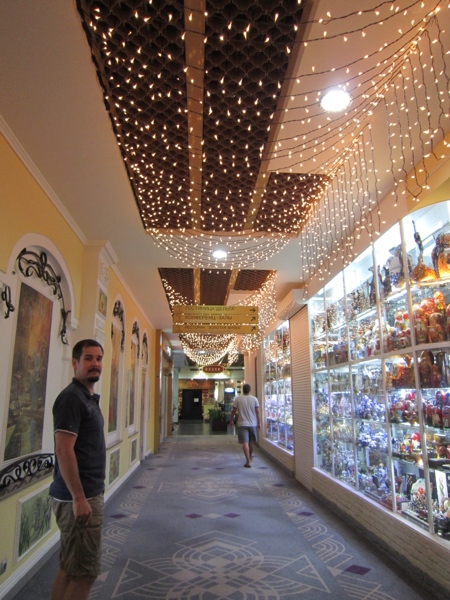 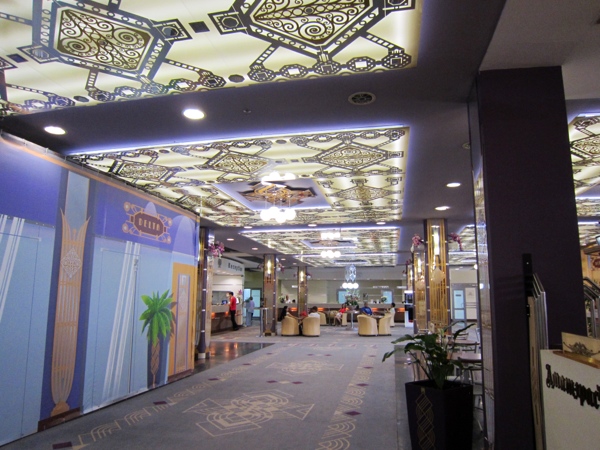 The hotel lobby area – so many lights, so much sparkly stuff! 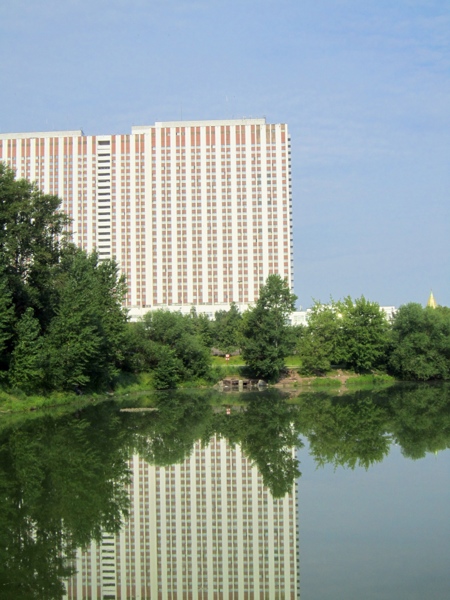 The gargantuan monstrosity that is the Izmailovo Hotel Gamma-Delta (seen from Izmailovo Park).