Pskov kremlin, Pechory monastery and being whipped with birch leaves at a real Russian banya.

What a day! We woke bright and early this morning to sunrise over the forests of north-western Russia and watched from our train window as wilderness turned into villages and rural farmland. The scenery was beautiful, but it was a little shocking to see how rustic some of the little villages we passed are. The houses were more like small wooden shacks than modern homes, and there wasn’t an ounce of tarmac to be seen anywhere. It’s hard to imagine that in a supposedly civilised, first world country, such basic living conditions persist. It seems outside of the major towns and cities, life in Russia hasn’t changed much in centuries (except for the introduction of electricity). I guess we expected it, having seen footage on movies and in documentaries about rural Russia, but the reality is still a bit shocking. This is what I would expect in Africa, not Europe. How do some of these isolated hamlets survive through the harsh Russian winters?? All I can say is Russians must be tough, really really tough.

Views from the train at 6:00am – plains somewhere outside of Pskov.

Views from the train at 6:00am – rustic Russia at its best. 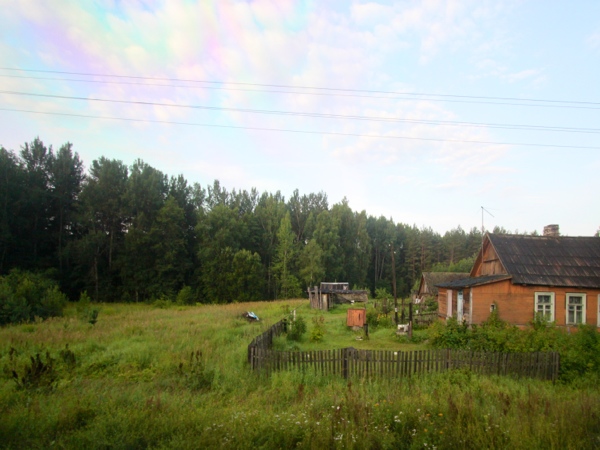 Views from the train at 6:00am – village about 120km outside of Pskov.

The countryside gave way to blocks of flats again and soon we were in Pskov. This town of 200,000 people is the capital of this region and was once an important trading port and defensive citadel for the Russian Empire due to its strategic position (it is only 30km from the Estonian border and is built along the banks of the Pskova River, a wide navigable waterway which gives access into the northern waters near Finland, Denmark and Sweden). Due to its historical importance, Pskov attracts its fair share of tourists, with the cathedral and the ruins of its kremlin (translation = “fortress”or “citadel”) being the main (only) attractions.

After arriving by train we were escorted to breakfast at a local restaurant and then taken for a walking tour of the historical centre, the kremlin and the cathedral by a specialist local guide who was great – she really knew her stuff but managed to keep it light-hearted (for Russia) and interesting. The town itself is prettier than we expected, at least around the historical centre. The buildings along the riverbank were especially lovely; they were well-preserved examples of Classical and Neo-Classical architecture. The fortress and church were interesting enough, though its obvious that the wealth that this trading town once had is gone, with much of the fortress in ruins. They made for a good couple of hours of sightseeing though and it was so nice to be out of the big city and just enjoy the sunshine and relative quiet of a small town! 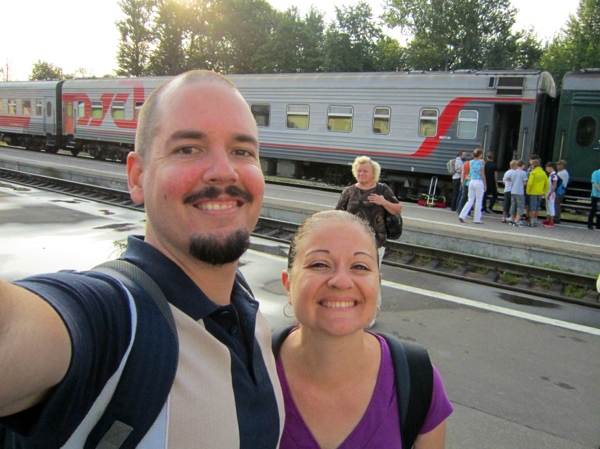 Look at us – we survived our overnight Russian train adventure!

On the way to breakfast in Pskov, walking through the historical centre of town.

The walls of the Pskov kremlin and the Pskov Cathedral. 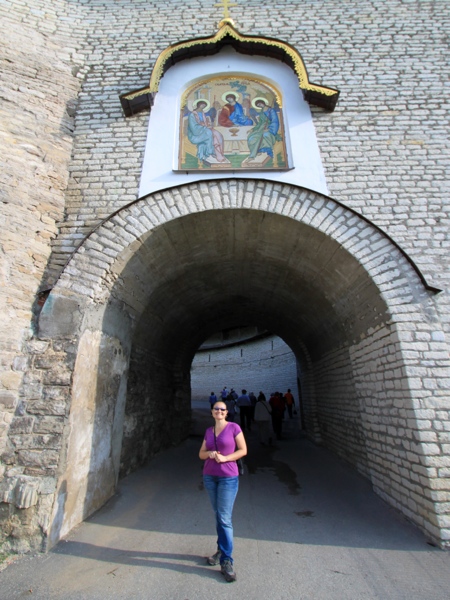 Entering the gate of the Pskov kremlin.

Inside the Pskov kremlin, which is unfortunately mostly in ruins. 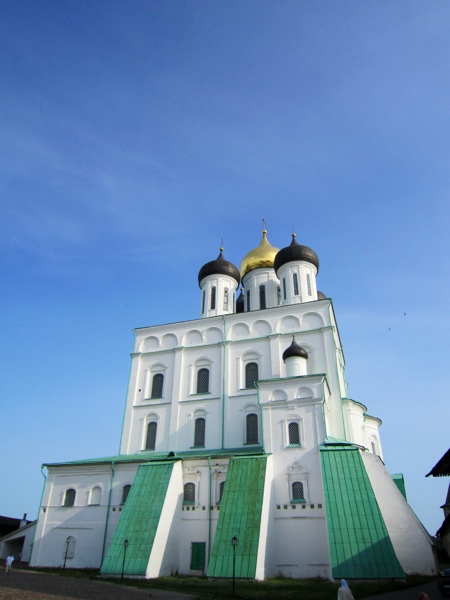 The Pskov Cathedral has the characteristic 5 domes of all orthodox churches  – a central golden one to represent Christ, and four others to represent the gospels.

From Pskov our bus took us to the Pechory Monastery, about 40km from Pskov. This monastery was first established in 1452 after a fresh-water spring and some caves were discovered at the site. The water from the springs reputedly has health-giving properties and the caves are considered sacred as they helped sustain the life of the founder of the monastery through a harsh winter, according to the legend. We now know this is most likely because they are geothermally heated and remain relatively warm (i.e. around 10-12C) all year round, though this doesn’t lessen the religious significance of the site for many Orthodox Russians.

The monastery itself is home to about 100 monks and contains within its walls a number of 19th century buildings that function as the monks’ living quarters, mess hall, etc; a chapel; a fount from which the sacred spring waters could be drunk; and a central church, built atop the sacred caves. We did a brief tour of the monastery, and a few members of our tour group partook of the sacred spring waters and went in to say a prayer at the church. Being the heathens that we are, Shane and I did neither – though we still enjoyed the serenity of the monastery, and admired the artwork and architecture.

One of the buildings within the Pechory Monastery grounds. This one serves as their mess hall.

The main church at the Pechory Monastery, built on top of the sacred caves. 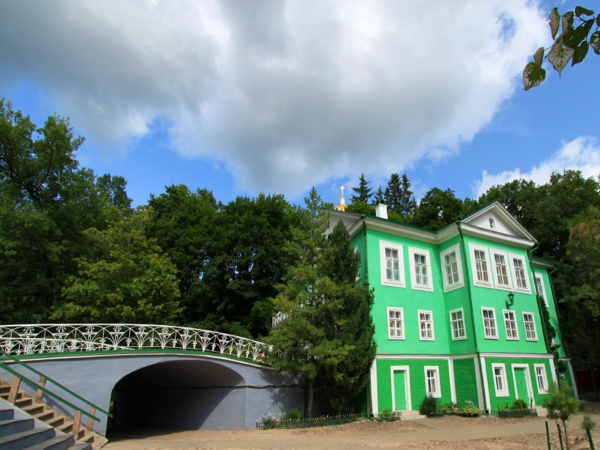 One of the 19th century buildings within the monastery that serves as the monks’ quarters.

The chapel at the Pskov Monastery, built beside the fount where the sacred spring waters bubble up to the surface.

By this point it was well and truly lunchtime and we were famished, so we were really looking forward to our third venue of the day: an authentic Russian banya (translation = sauna) where we would be served lunch and get the chance to try the banya. Like many cultures where winters are long and very cold, Russians love their sauna; the idea being that you broil yourself in a 65C sauna, whipping yourself with birch leaves while you’re in there to help stimulate circulation and release the toxins, then you run outside and jump into the nearest frozen lake or river. Being summer there were no frozen lakes or rivers nearby, but there was a conveniently located icy cold swimming pool.

At first neither of us were that keen to do the broil/beat/freeze combination, but after Tatyana our guide assured us it was awesome, we gave in. Swimming costumes endowed we went in to the sauna first with a few of our fellow tour groupies and sweated out about 1L of fluid, whilst whipping ourselves and each other enthusiastically with bunches of birch leaves and twigs. Then, just as the heat got too much, we raced outside and plunged our sweaty selves into the cold swimming pool. Sounds nuts I know, but it was AWESOME! Talk about refreshing! I have never felt so very very alive as I did after 3 rounds of that crazy Russian banya stuff! Especially because, after each round of broil/beat/freeze, you have to have a shot of vodka (it’s traditional apparently). 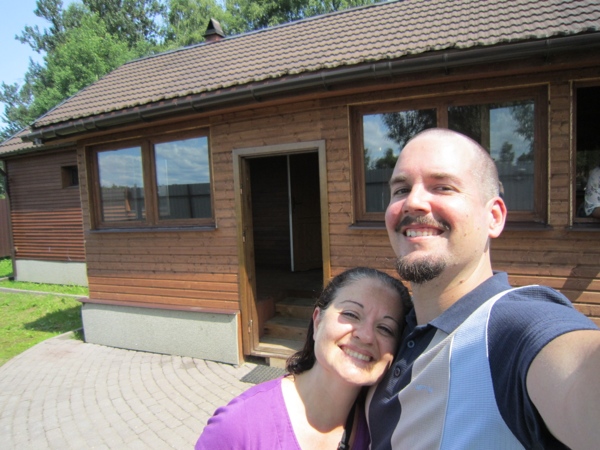 Us, dressed and fed, outside of the banya where we broiled, beat and froze ourselves repeatedly.

Following our broil/beat/freeze adventure, lunch was served and it was delicious – chicken and lamb grilled over hot coals with cabbage and potatoes. Delicious and very filling – as we’ve found all Russian food to be. Beef stroganoff, beef dumplings, potato pancakes with sour cream – it’s all pretty heavy and filling, but soooo tasty.  After lunch, with full bellies and feeling cleaner than we had been all day (no showers on the train see), we jumped back on our bus for the long road trip to St Petersburg. It took us 4 hours to get from Pskov to St Petersburg (our last stop in Russia), and it was one crazy, bumpy ride at about 140km/hr the whole way. Man Russians drive like maniacs! Fortunately the drive was uneventful, with the scenery being an unchanging limitless forest of trees, interspersed with large tracts of grassland sprinkled with summer wild flowers.

From what we’ve seen, Russia is made up of endless plains of grasslands….

…and forests (full of bears, moose, deer and all sorts of other wildlife apparently).

We did have the misfortune of stopping at a truck stop for a wee break during our trip up here. The toilets were really bad, not the worst we’ve seen in Russia, but certainly not up to Japanese or Korean standards. Public toilets here have generally been the stuff nightmares are made of – and that’s the ones you pay for! We’ve been told flat out to avoid the free ones as they are “not safe” (not quite sure what that means, but I’m OK with not finding out). It costs about 30RUR ($1AUD) at most paid loos, though I’m not sure exactly what you’re paying for, ’cause it ain’t for maintenance, that’s for sure! I’m not generally a fan of anti-bacterial wipes and sprays, especially in Aus where things are pretty clean, but here in Russia, hand sanitiser is a must I think.

Anyway, enough about the horrors of Russian privies, we’re in St Petersburg now, happily tucked up in bed at our hotel, having enjoyed the pristine hygiene of our private ensuite bathroom (ahhhhhh….). Already St Petersburg seems so much more civilised than Moscow – the streets are so clean, the buildings are well maintained and the grass in public spaces is actually mown! We’ll be able to make better comparisons tomorrow, after we’ve been for our St Petersburg city tour and seen some of the sights, so do svidanya until then!