Our Russian adventure is already at an end…, but our Scandinavian one is just beginning!

A week goes by so quickly when you’re having fun, and our week in Russia was definitely exciting. A little nerve-wracking at times (i.e. any time we were in a car or bus weaving in and out of traffic), awe-inspiring and magnificent in some ways, and yet so dirty, unkempt and disappointing in others. I’ve never clutched my purse quite so tightly as on the Moscow Metro, and have never seen so much gold and opulence as in the palaces of St Petersburg; I’ve never encountered so many grim-faced people, or so many wildly passionate, loud and boisterous people. The contrasts in Russia were quite stark, but all together our experiences created a kaleidoscope of colour, sights, sounds, smells and tastes that is Russia for us.

Some of the things we will always remember about Russia:

We left this morning by train on the Finnish Helsinki-St Petersburg intercity train. What a modern wonder that was! Not quite a Japanese shinkansen, but not far off. We sped along at 220km/hr, travelling from St Petersburg to the Russian border town of Vyborg, where the Russian immigration officers came on board and checked everyone’s passports and visas. Quite painless actually. We were quickly through and on to Vairrikala, the border town on the Finnish side. Here the Finnish officials came on board and checked our passports and stamped us into the Schengen area (as Australians we don’t need a Schengen visa, but we are limited to staying in the Schengen area (basically Europe) for a maximum of 90 days). Again, quick and easy. From there it was another 2 hours or so to Helsinki. Along the way we passed some beautiful Finnish countryside – lakes, pine forests as far as we could see, and the occasional village and town.

Us on board the train from St Petersburg to Helsinki. All very modern and comfortable. You’ll note that Shane is pulling his best retarded monkey face. Charming ain’t he?

Vyborg – last town on the Russian side of things.

Watching the Finnish scenery go past. Lots of beautiful lakes and rivers.

We saw lots of pine forests and green farmlands as the train sped through Finland.

One of the many lakes we passed on our way to Helsinki. Apparently Finland has more than 188,000 lakes!

We arrived in Helsinki at 2:00pm, quickly found our hotel and checked in. The hotel is a tiny boutique lace near the train station which occupies the top 2 floors of a lovely 19th century building. We have a great room, facing the street, with our own miniature ensuite bathroom and 3 windows to open and enjoy the long days (sunrise is at 4:30am, sunset at 10:30pm). There are cafes and restaurants below us and the waterfront is just a few hundred meters away.

Foyer area of Hotel Finn, our home for the next few days. 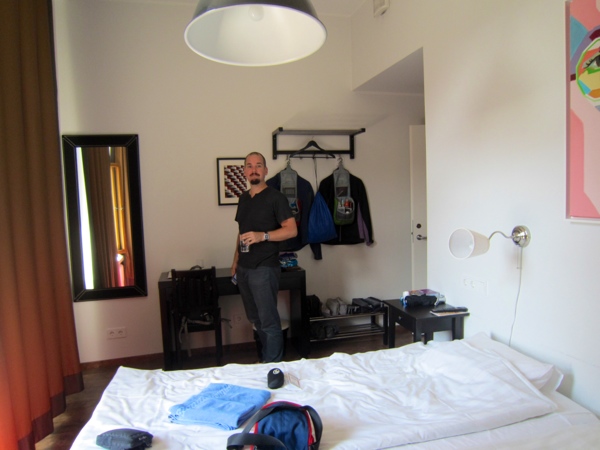 Shane getting ready for bed. Don’t be fooled by the amount of light – this is 10:00 at night!

As soon as we’d dropped our bags off, we headed straight for the ocean and found a lively market with stalls selling everything from basic clothing, to real fur coats, hunting equipment and fruits and vegetables. Best of all where the stalls selling berries – punnets of fresh strawberries, raspberries, blueberries, blackberries, red currants, black currants, gooseberries and some berries we’d never seen before: cloud berries. We had a great afternoon snack of fresh berries and a relaxed stroll around the Helsinki waterfront. 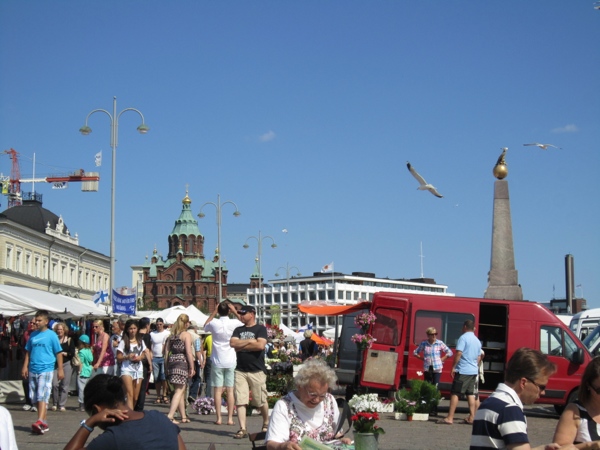 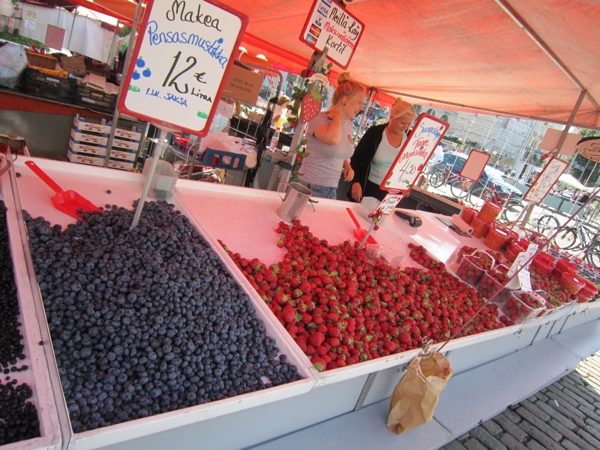 Kaartinkaupunki Markets – so many fresh berries! 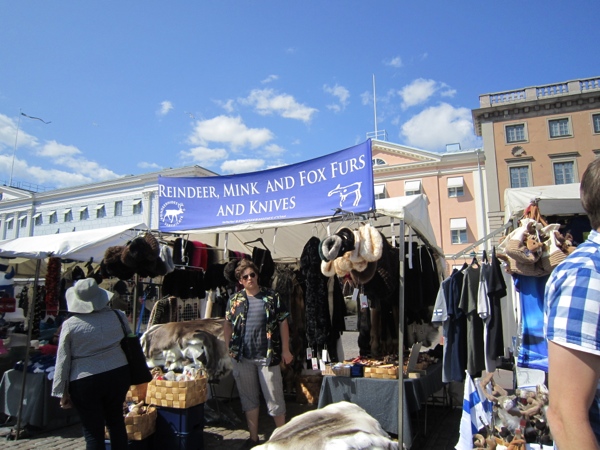 Kaartinkaupunki Markets – so many fresh flowers!

Relaxing at the Helsinki waterfront.

Helsinki is a very pretty city, lots of well maintained 19th century buildings and wide streets. There’s a big park through the middle of town that we wandered through; it was funny to see people lying on the grass sun bathing when it was only about 22C. I guess when winters go down to -30C, +22C must seem pretty warm! We’ve got the whole weekend to see more of this cute city, so we’ll tell you more about it tomorrow!