Evening blog fans! We caught the train to Savonlinna today, a small town 340km North-East of Helsinki in the Lakes Region of Finland. It took us 4 hours to get here from Helsinki, with a train change at Parikkala (see map below), and lots of beautiful scenery along the way – especially as we got close to the Lakes Region and forests and fields gave way to vast expanses of water.

Our train ride today took us from Helsinki (A) to Parikkala (B), then on to Savonlinna (C). You can see why this Eastern part of Finland is called the Lakes Region.

Our train ride was very comfortable, though the train was packed with holiday-makers. We had Finnish, Spanish, Swedish and German people in our carriage. Oh yeah, and Australians of course (i.e. us)! 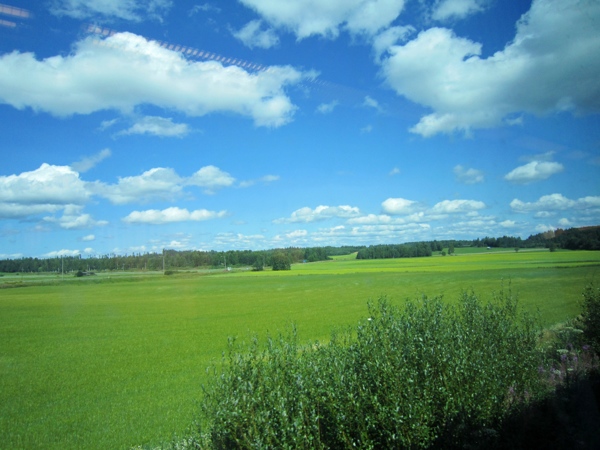 Watching fields and farms go past from the train.

Until we reached the Lakes Region and farms gave way to vast expanses of water.

When we finally arrived in Savonlinna we had to figure out how to call a taxi because our hotel for the next few days is a fair way out of town (everything else was fully booked). Thank goodness Finnish people speak English because it made the whole taxi experience very easy and within 5 minutes we were at our hotel. I guess the term “hotel” can only be used loosely here – we’re actually staying in a set of uni dorms. In the summer when all the students are off, they rent the rooms out quite cheaply. It’s very basic and about 3km from the main town centre, but it’s clean and comfortable, and we have a kitchen! This may not seem very exciting to those of you who have a home and a kitchen of your very own, but we haven’t had the luxury of being able to cook our own food for 6 weeks and it’s a welcome change. Also, given how expensive Finland is, it’ll be good to save a bit of money on food by just buying groceries at the supermarket, rather than dining out at cafes and restaurants all the time.

Our home for the next few nights. Basic but comfortable.

Look we have a kitchen! A whole kitchen!

Savonlinna is built across 6 small islands, in the middle of Lake Saimiaa, which is Finland’s largest lake (area = 4,400 square kilometres). It’s surrounded by forest and is built around a saw mill and paper and wood pulp factory; Savonlinna has a permanent population of just 25,000 but doubles in size in summer when thousands of opera fans descend for the Savonlinna Opera Festival*. Unfortunately we are NOT opera fans, but we arefans of beautiful lakes and gorgeous scenery and Savonlinna has a reputation for being one of the prettiest lakeside towns in Finland. It also has a castle worth seeing, so we had to come! As you can see from the photos below, this is a gorgeous spot. We had a fantastic afternoon strolling along the waterfront, watching people swimming (we stuck a toe in – way too cold for us!), and enjoying the long hours of sunlight.

*Fancy attending the opera in a castle? Well then you must come to Savonlinna! The Opera Festival here runs for 4 weeks every year during summer and performances are held on an open-air stage within Savonlinna Castle. Apparently the festival is quite well-known amongst opera fans and performers and people book tickets and accommodation a year or more in advance. This is why we ended up having to stay a little way out of town.

It took us about 30 minutes to walk into town along the lakeshore. You can just see the main town of Savonlinna behind us.

The beautiful lakeshore of Savonlinna. The water was so flat and smooth – it looked so inviting!

“Come on! Let’s go for a swim!” Suggests Shane. He stuck a toe in and quickly changed his mind about THAT!

There are parklands all along the shores of Lake Saimaa, and we saw lots of people sun-baking and picnicking on the grass.

Our first glimpse of Savonlinna Castle…

Even though we didn’t get to go into the castle and see the opera, we still got to admire it from the outside. It’s an impressive fortification, made all the more impressive by how well it has been restored. Savonlinna Castle was originally built in 1475 by the Swedes as a defensive post. Due to its proximity to Russia, the castle was often the site of skirmishes and sieges, but is today used as a tourist attraction and as the site for theatre, musical and opera performances. The castle was our last photo stop for the day before we walked back to our hotel (via the supermarket) for some dinner, a shower and now, some well-earned rest. So hyvää yötä (translation = good night) and hoo-roo until tomorrow!

Savonlinna Castle sits on an island of its own, linked to the other islands by bridges.

Originally built as a defensive fortress in 1475, the castle was fully restored in the 1960s.

The central courtyard of the castle is hired out to theatre companies, and for music performances. I think it’s a great way to make the castle useful and generate income for Savonlinna.