Farewell Finland – we’re off to Sweden!

Our week in Finland is up already and tonight we’re sleeping aboard the Tallink Silja ship “Serenade”. The Serenade is one of a fleet of ferries that go between Stockholm and Helsinki, across the Northern Baltic Sea. It’s a huge ship – 12 floors above the waterline, a host of restaurants and shops on board, and enough berths for almost 3,000 passengers. It also holds up to 450 cars, which is A LOT! We’re up on the top floor and have an external cabin with a window to the outside world (my choice – I can’t stand the thought of being locked in an inside cabin, with no view out to the world and no way of knowing what time of day it is). The cabin is small but comfortable and we got an authentic Swedish “dinner viking” (translation = dinner and drinks buffet) included with our ticket, so what’s not to love?! 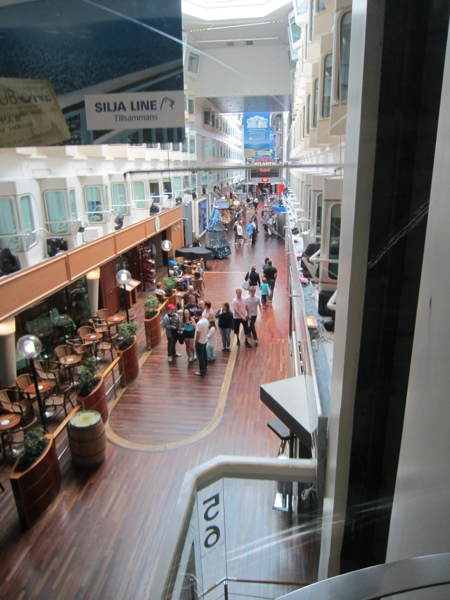 The internal promenade of the shop. This is where all the shops and restaurants are.

Us on the internal promenade of the ship. Some of the cabins have windows to the inside of the ship, as you can see behind us.

Leaving the Port of Helsinki this afternoon. 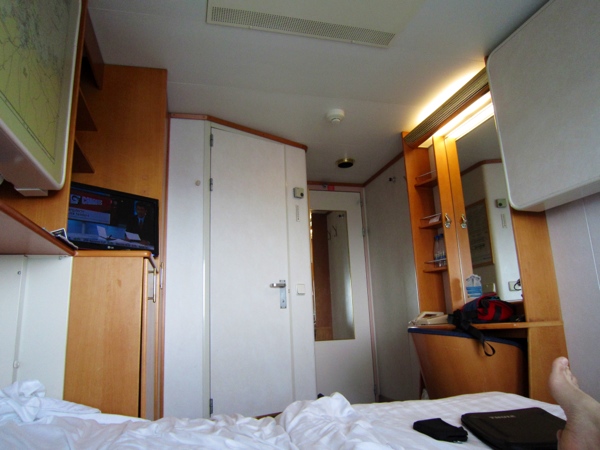 Tonight’s abode: our cabin on the Tallnik Silja “Serenade”.

We have a map of the North Baltic Sea in our cabin. It shows the route the ship takes on its journey to Stockholm. Shane is kindly indicating where Helsinki is on the map. We’re going all the way to the far side.

Watching all the cars queue up to drive into the ship from our cabin window. 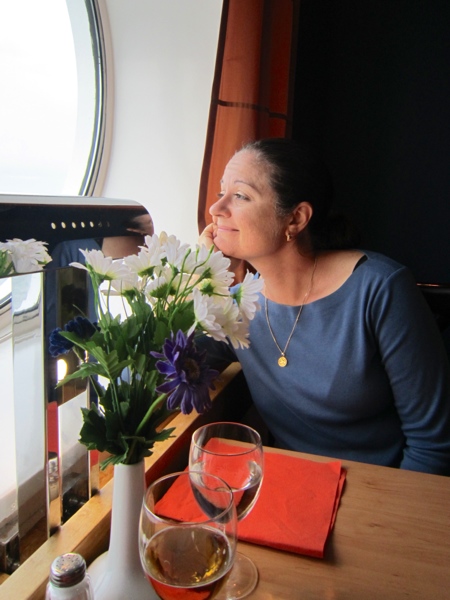 Watching the world go past from our dinner table on the Tallnik Silja “Serenade”.

We boarded the ship in Helsinki, after catching the train in Savonlinna this morning. Murphy’s Law being what it is, given that we were leaving Savonlinna today, the rain stopped. It was still cloudy, but there was no Arctic wind to freeze our eyelids shut. Despite the clouds, it was lovely watching Savonlinna Castle, Lake Saima, forests and farmlands go past from the train, and then to see Helsinki fade into the distance as we sailed away this afternoon.

Watching Savonlinna Castle go by from the train.

Watching lakes and rivers and forest zip past from the train. 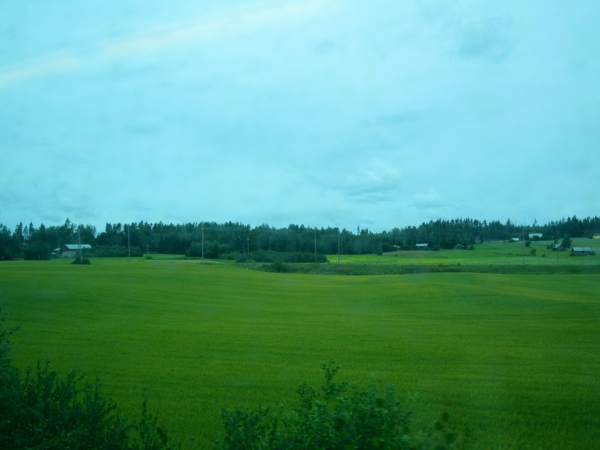 Watching as we left the city of Helsinki behind.

Sailing out of Helsinki harbour, past its many small islands.

Leaving the final piece of Finland behind.

Even though we have only been in Finland a week, there are a few memories we will definitely take with us from this unique country, including:

We would love to come back to see more of Finland’s wilderness. Shane is particularly keen to embark on one of the multi-day kayak or canoe trips we’ve seen advertised throughout the Finnish Lakes Region. You basically pack all your stuff into a canoe at one end of the lake and paddle 15-20kms a day for 2-7 days with a guide to ensure you end up in the right place. It would be a great way to see some Finnish wilderness, but the fact that you have to camp each night on the lakeshore puts me off. I guess Shane will just have to find another friend to take on that trip!

There’ also a whole lot of Northern Finland that we didn’t get to see this time, so that’s the list for next time too. We’d love to go right up to Inari, far above the Arctic Circle, to learn more about the Sami and how they live their traditional lives as reindeer herders so far North. On the way I would also like to go to Rovaniemi, the “official” terrestrial residence of Santa Claus. For now though, we’ll have to satisfy ourselves with what we’ve seen of Finland so far, because tomorrow we wake up in Sweden! Good night until then, from somewhere out in the middle of the Baltic Sea…