We left Stockholm today (awww…), heading North for the lakeside town of Östersund (yaaay!). The train journey took us first from Stockholm to Sundsvall (on the East coast of Sweden) on an InterCity Express train (very schmick); in Sundsvall we then had to change to a much smaller (and slower) regional train. It only took 3 hours to cover the first 380km, but a further 3 hours to do the last 190km – the joy of regional trains! Still, the trip was great for scenery; the regional train from Sundsvall took us through some especially pretty Swedish countryside, past lots of postcard-perfect farms, lakes and rivers.

Our train trip today took us from Stockholm (A), to Sundsvall (B), then on to Östersund (C).

On the way we passed lots of pretty farmland… 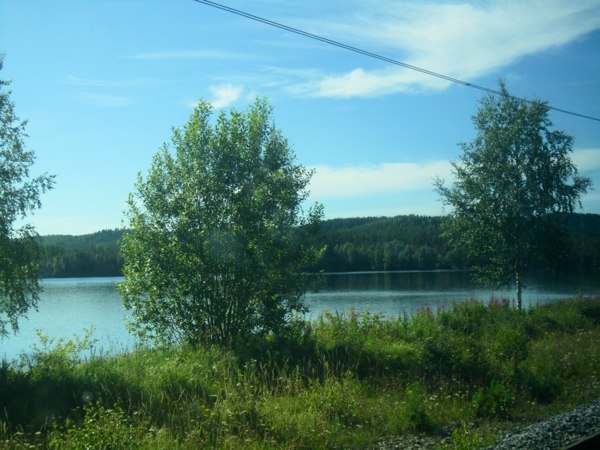 Between Sundsvall and Östersund we passed lots of deep blue rivers…

We decided to come up to Östersund for a couple of days to see something of inland, regional Sweden. Östersund was an easy choice as it’s on the way to Trondheim (Norway), our next stop, and is famous for its lakeside setting. This small city of 60,000 is built along the shores of Sweden’s fifth largest lake, Lake Storsjon, opposite the island Frösön. It is the government, trade and business hub for this region and is Northern Sweden’s largest city (which tells you how sparsely populated the rest of Northern Sweden is – this town is pretty small!). There is also a university here and in winter this is popular winter sports destination. In summer though it’s all about the lake, with lots of holiday makers coming here to relax and enjoy Lake Storsjon. We love relaxing, and we don’t mind a nice lake setting to do it in, so Östersund seemed like a good place to hang out for a little while.

The first thing we did when we arrived was check in to our hotel, where we promptly realised we had left our jackets on the train. Both of us. DOH! Neither of us is THAT attached to our clothing, but seriously, what are the chances that we would both be that distracted by the gorgeous scenery that we BOTH failed to notice our respective lack of warm clothing?? *SIGH* So we rang the train company and they informed us that our train was on its way to Trondheim in Norway at that very moment but that it would be coming back through Östersund at 8:30pm, and that our best bet was to meet it at the station and ask the conductor about our lost articles of clothing. We crossed our fingers, hoping no one between here and Trondheim liked the look of our well worn jackets, and that they would be returned to us at 8:30pm.

In the mean time, we went out to hunt and gather for some sustenance and check out the town. What we found was a very cute, though rather small, town, with lots of cafes and restaurants…. that were all closed. And lots of shops…. that were all closed. And lots of empty streets. “Errrrr…., this is peak tourist season up here (all the hotels are booked out apparently), so where are all the people?” we wondered.

Errrr.. where are all the people?

After a bit more strolling around, we decided to head for the water-front, and that’s where we found ALL the people of Östersund (and a good many tourists too). Turns out the Östersund City Council organises a rock/alternative music festival every July, with lots of bands playing on the various stages set up around the lake. The whole festival is free, and heaps of people flock here form all around for the week to enjoy the music and camp out by the lake. Turns out this year, the festival is on this week! No wonder town was empty – every man and his dog (literally – there were dogs everywhere) was down by the lake rocking out to the music and/or having dinner and a drink at one of the many restaurants along the lake. We have since  found out that for the music festival week, lots of the local restaurants move down to the lake. So it’s all happening by the lake! We totally scored without even realising it: free music in an epic location, with loads of good people-watching to enjoy.

We found them – turns out all the people in Ostersund were by the lake at the music festival!

Not a bad spot for dinner, listening to the tunes and watching as the sun set.

Having found all the people, we decided to join them and had dinner on the water-front listening to some local rock group sing some much-loved Swedish classics… or at least, we assume that’s what they were singing – everyone else knew the words and was singing along in Swedish whilst we sat there confused but entertained. And just to end the night on a high note, when we went to re-meet our train our jackets were exactly where we’d left them, no worse off for having taken a quick trip to Norway and back without us. Yay! So in the end, a successful day all ’round!

Our beloved jackets: we thought they were lost, but now they are found.