Norway in a Nutshell

Evening blog-heads. Hope your day was as awesomely EPIC as ours! Today we embarked on a 12 hour adventure aptly named “Norway in a Nutshell”. The tour is designed to showcase a little bit of everything Norway has to offer in the way of natural wonders – rolling green farmland, crystal clear rivers, alpine lakes, waterfalls, mountains, and of course: fjords. It’s not really a tour per se, more like a series of tickets for trains, ferries and buses that, cobbled together, took us from Bergen to the tiny village of Flam by train, then onto Gudvangen by ferry, to Voss by bus, and finally back to Bergen. A grand total of 400kms of the most amazing scenery, like this… 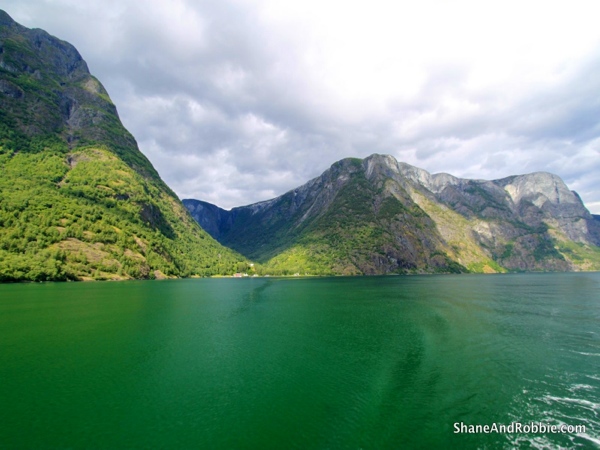 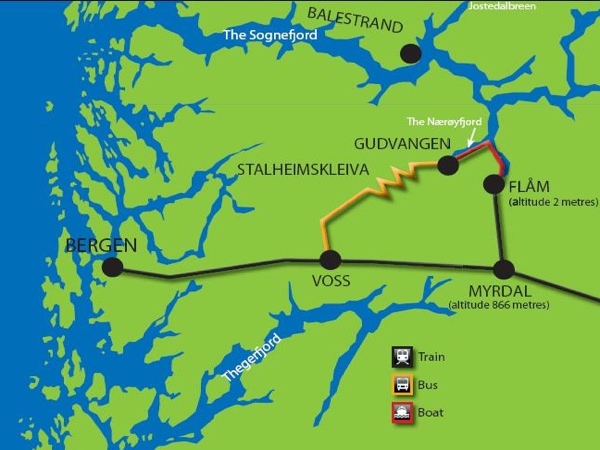 Our “Norway in a Nutshell” route.

“Norway in a Nutshell” gave us Norway’s beautiful fjord country on a scenic platter, starting right from the initial 2 hour train journey to Myrdal. We sped past some amazing views, though much of the journey was in the dark as the train-line passes through numerous tunnels. Tunnelling through must make travelling much quicker than going around the massive mounds of granite that Norway is covered in! The mountains here are unique – like great rocky boulders thrown around by some giant hand. It makes for some very dramatic scenery. 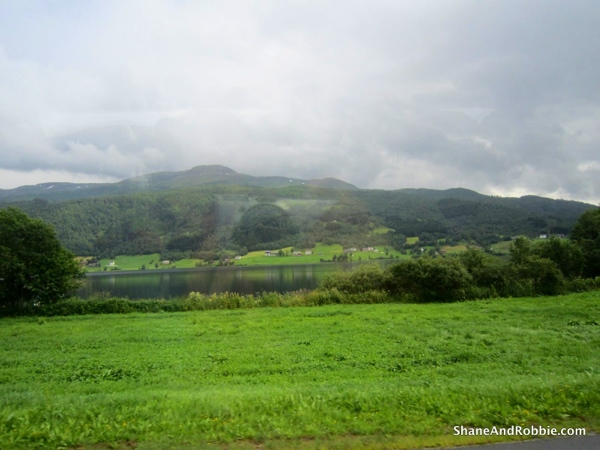 Watching mountains, farms and lakes speed past from the train. 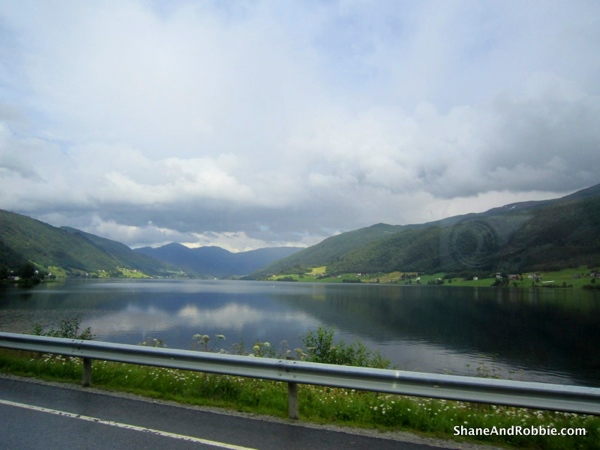 The still waters of Lake Vangvasnet. 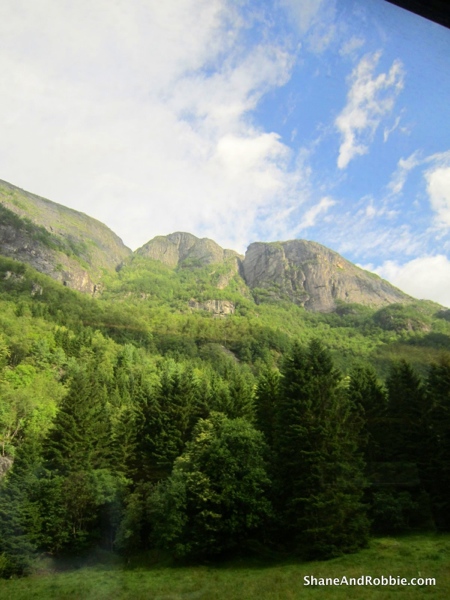 Looking up to the rocky roof of Norway.

Myrdal itself is barely a village, more just a train station and a couple of summer cottages. The only reason we even stopped there was because Myrdal is the starting point of the Flam Railway, one of the world’s most scenic railway lines. The Flam Railway is only 21kms long, but takes almost an hour to wind its way down the mountain-side from Myrdal to Flam. The railway line was opened in 1923 and took 20 years to build. It was considered a major feat of engineering in its time, and is still pretty impressive in that sense; to meander down the steep mountainside the railway goes through 20 hairpin tunnels, crosses 2 bridges and drops 863m to reach the village of Flam. There are cottages here and there throughout the valley and lots of amazing views to enjoy along the way. 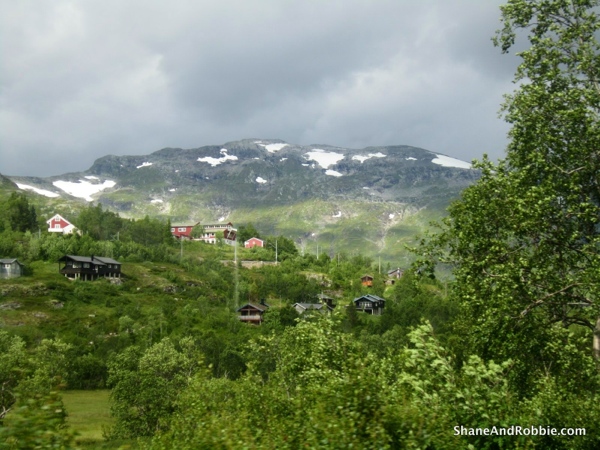 Enjoying the views of the valley on our way down the Flam Railway. 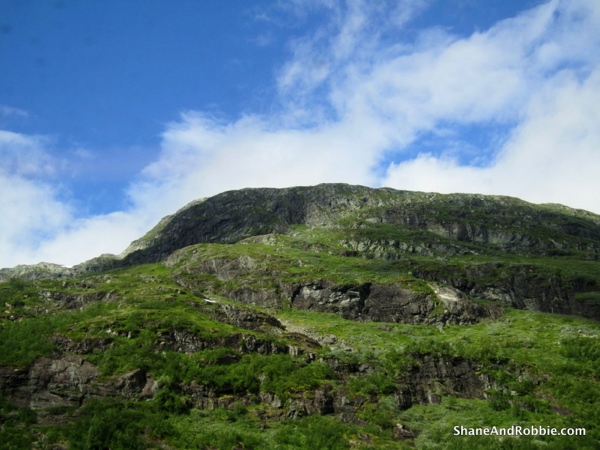 Looking up at the peaks around us on the way down the Flam Railway. 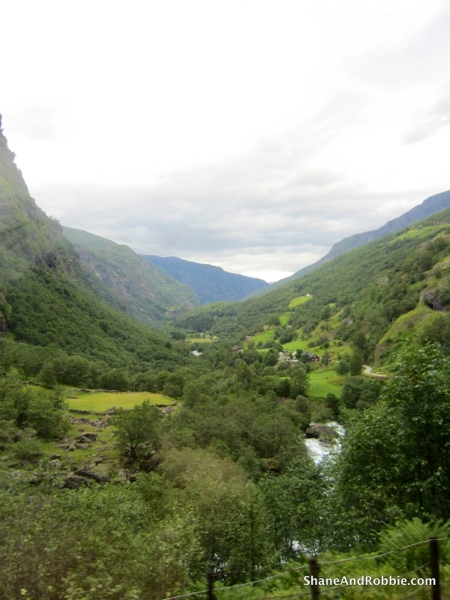 View of the Flam Valley far below from the train.

The Flam train passes numerous waterfalls, including the rather grand Kjosfossen (Kjos Falls). The train actually stopped at the Kjos Falls to let us all off to snap our photos. Very cool (literally – a lot of that water is melted ice and snow!). 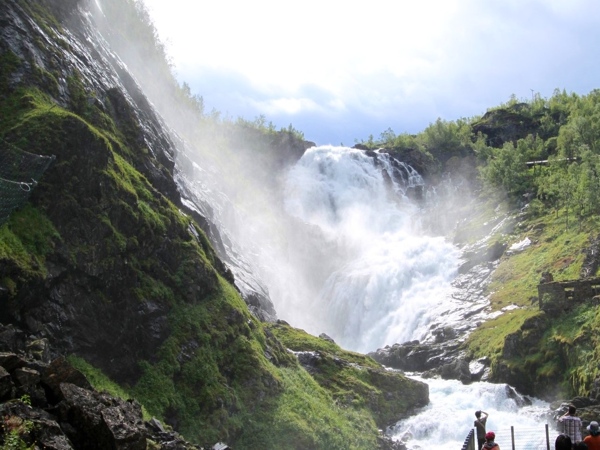 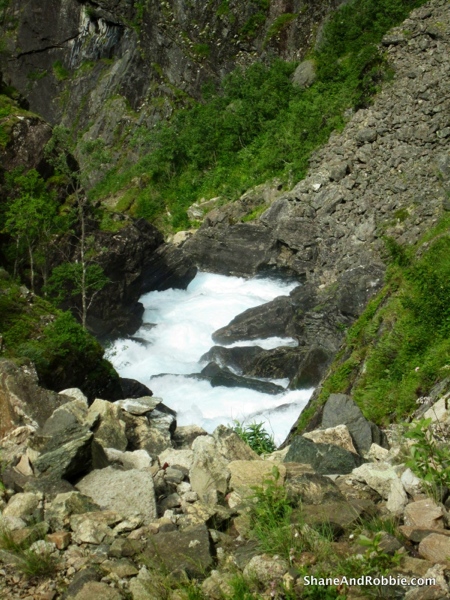 Looking down at one of the many waterfalls along the Flam Railway.

The Flam Railway also stops at the village of Berekvam where passengers can get off to hike the final leg of the journey to Flam. Berekvam’s claim to fame is that it is home to more sheep than people, and that it is THE CUTEST village we have ever seen (to date)! 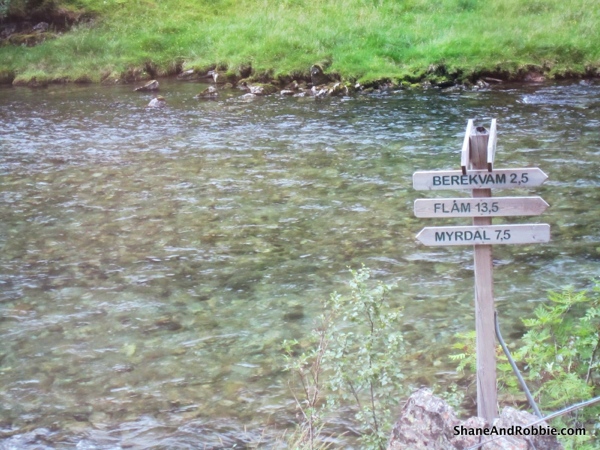 The Flam Railway stops at Berekvam, about half way down the mountain. 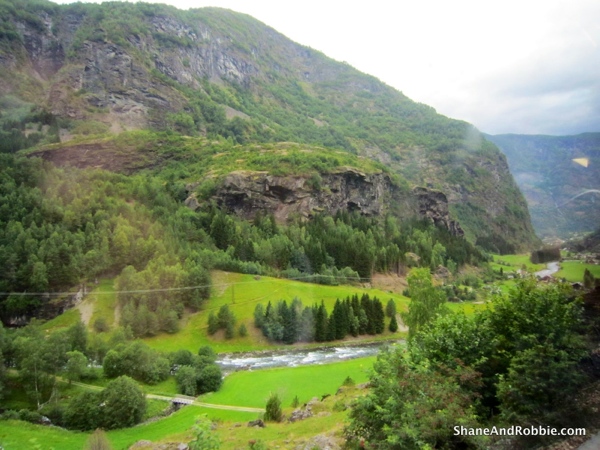 Coming down the mountainside, towards the bottom of the Flam Valley and the village of Berekvam. 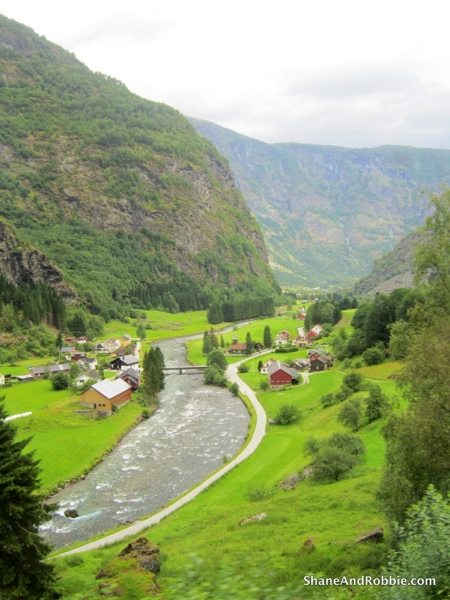 The village of Berekvam. Is this not the cutest village you’ve ever seen?!

We arrived in Flam around noon and had time to walk around the village, take a few photos and have some lunch before the ferry for Gudvangen left. Shane had a moose burger (made from 100% real moose apparently) for lunch and I had grilled salmon (the salmon here is amazing, as one would expect), ensuring we were well fed and ready for the next (not so) arduous leg of our journey. 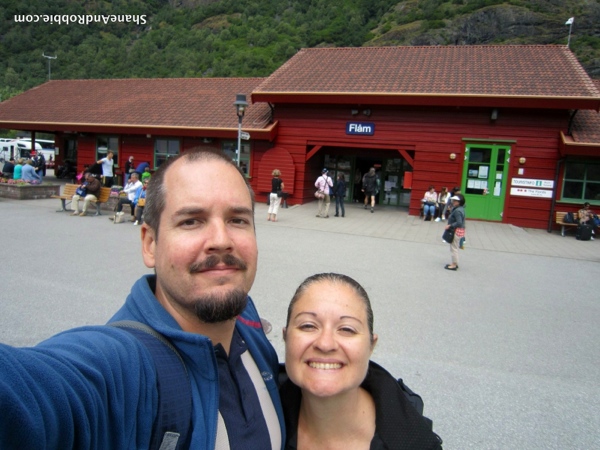 Our lunch stopover in Flam for lunch 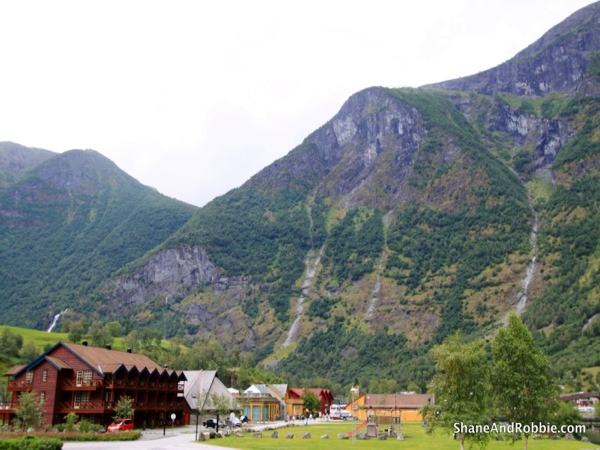 The tiny village of Flam sits at the end of the Flam Valley, at the mouth of the Aurlandsfjord. 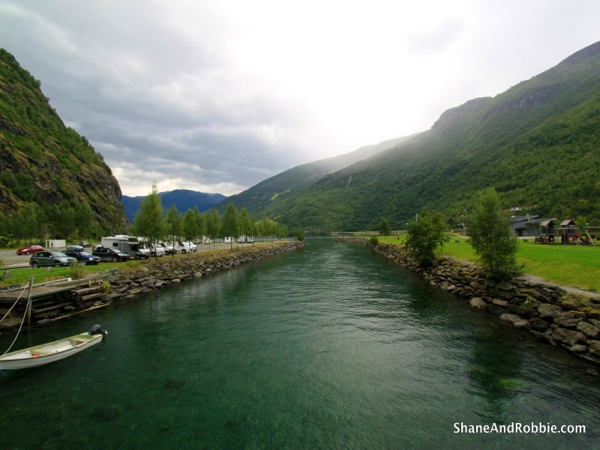 Looking down the river, out towards the fjord from our lunch spot in Flam.

As you can see from the photos so far, we had a bit of a patchy day – a bit cloudy but with the occasional moment of sunshine. We knew coming to this part of the world that it would probably be a bit damp and cloudy. The topography in this area means that moist air off the North Sea hits the mountains and condenses on an almost daily basis, meaning Bergen and surrounds are cloudy and wet almost every day of the year. In fact, on average Bergen has less than 30 days of unclouded, dry sunshine very year and the average summer temperature is 14C. (Just don’t know how people live in such a damp, cold place! Guess we’re just spoilt, used to sunny Queensland weather as we are.) For us the fact that it wasn’t actually raining today was a real bonus! It meant we could sit outside on the ferry from Flam, staring up in awe at the cliffs and mountains around us. For 2 glorious hours we cruised up the up the Aurlandsfjord then down the narrow Naeroyfjord to Gudavangen (43kms in total). 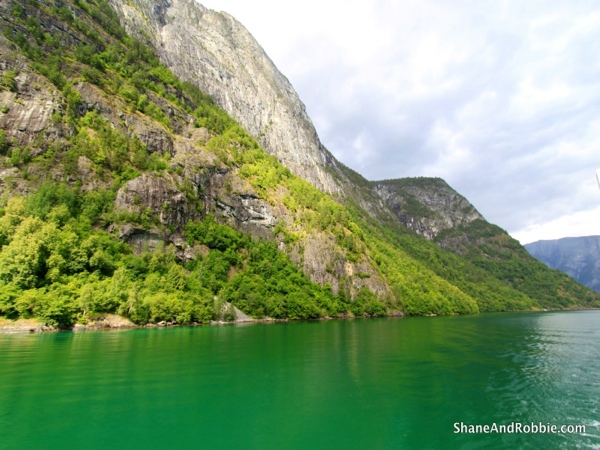 Cruising through Norway’s fjords the water was an incredible aquamarine colour. 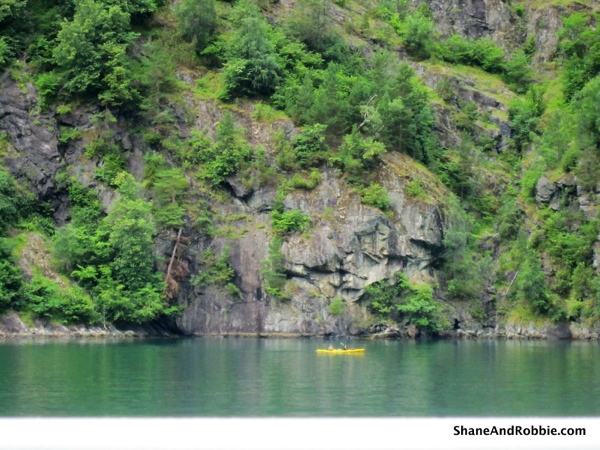 These guys were cruising up the fjord in a kayak – how cool is that?! 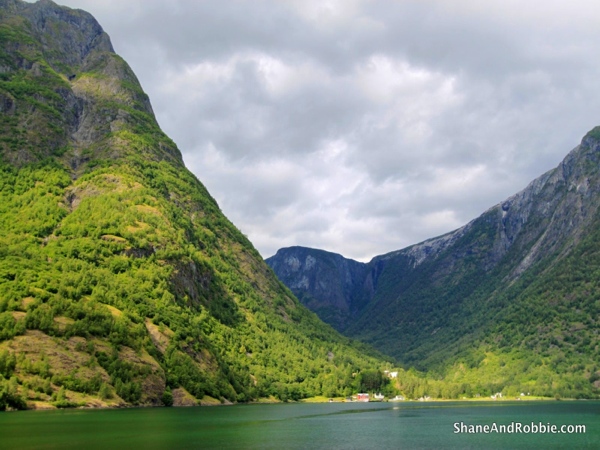 It’s difficult to get a sense of size for these photos, but these mountains were HUGE (most are in fact over 2000m high). 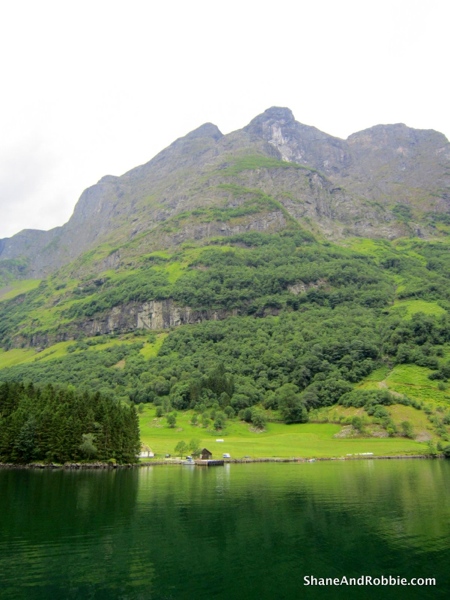 There were occasional farms and sheep dotting the pastures alongside the fjord. 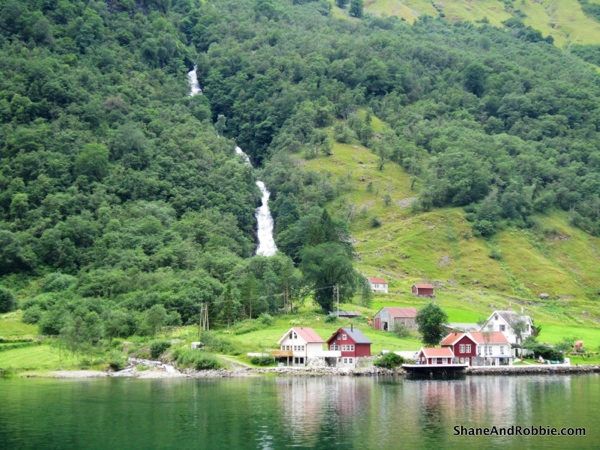 We sailed past a few of the cutest farming hamlets like this one. 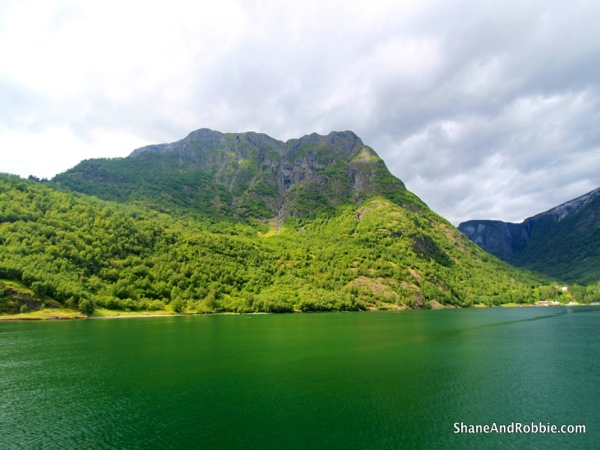 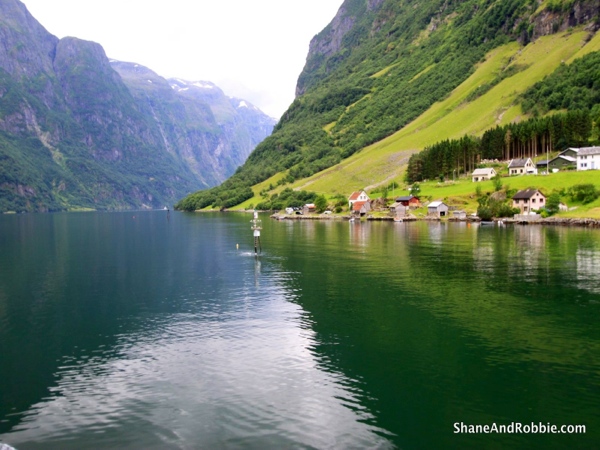 The water was so dark and still – probably de to the very deep waters (these fjords are over 1300m deep). 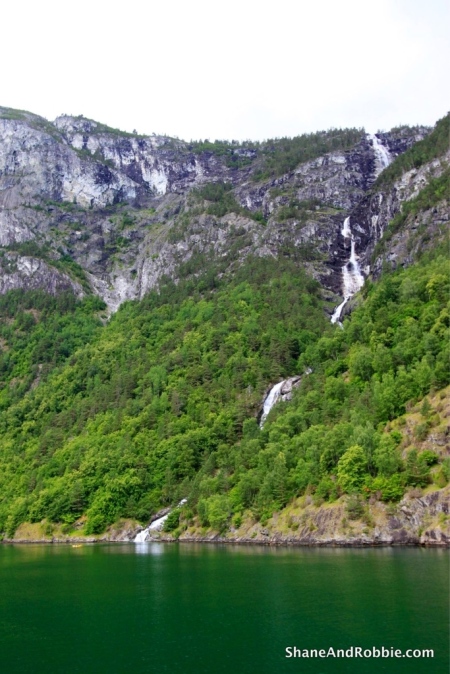 There were lots of waterfalls spilling into the ocean waters, like this one.

The ferry dropped us all off at the tiny village of Gudvangen where buses awaited to drive us the 46kms along the Stalheimskleiva Road to the town of Voss. The Stalheimskleiva Road is Northern Europe’s steepest road. From the top of Mt Stalheimskleiva the road winds its way down to the Naeroy Valley, down a seriously steep mountainside and around hairpin bends so tight that we were praying the bus driver really knew what he was doing.  On the way down we had fantastic views into the valley and passed two stunning views called Sivlefossen and Stalheimsfossen. 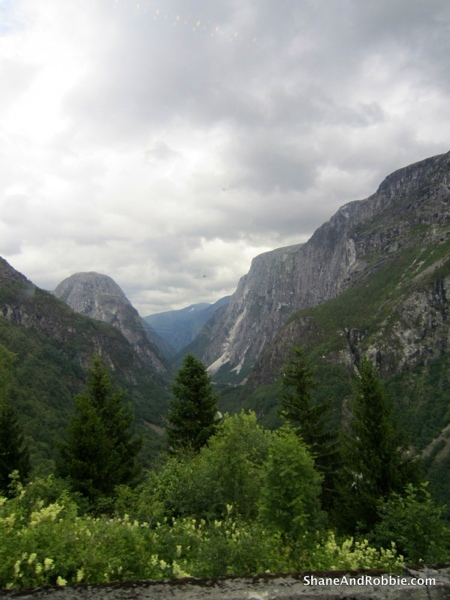 Looking down from the top of the Stalheimskleiva Road. 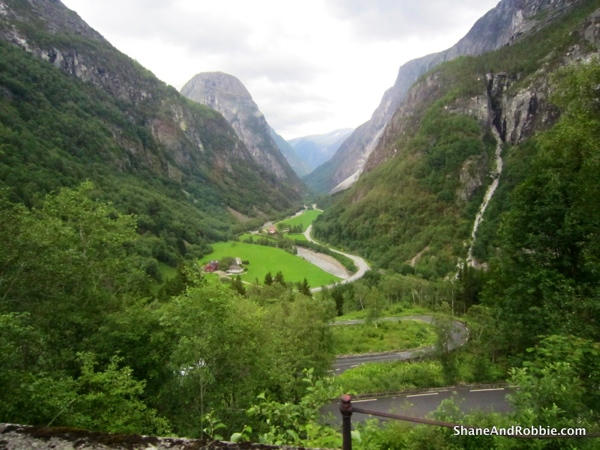 The awesome view down into the Naeroy Valley.

We drove past the Sivlefossen (Silve Waterfall) on our way down.

After 1.5 hours on the bus we arrived in Voss, a nondescript town with a small train station where we hopped on a train back to Bergen. And even then the scenery just kept giving! Norway is incredible – the windswept mountains, barren heaths, pine forests, waterfalls, rivers and lakes combine to create a harsh, unique kind of beauty that has seriously impressed us. 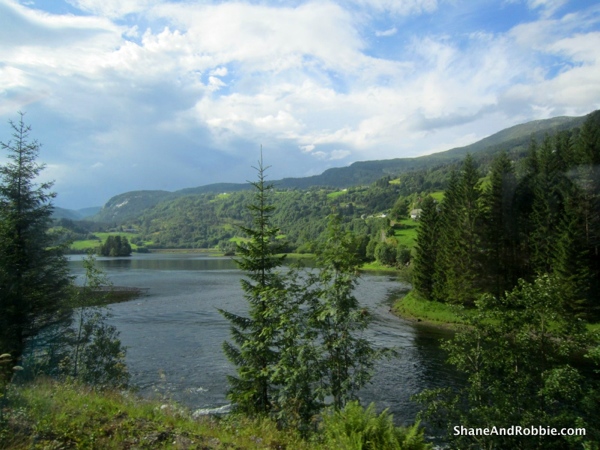 More epic scenery on the train from Voss to Bergen. 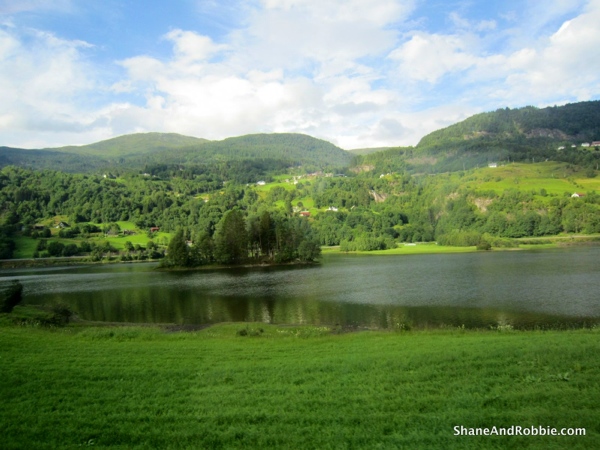 With the sun still out at 7:00pm we continued to get the odd moment of glorious sunshine. 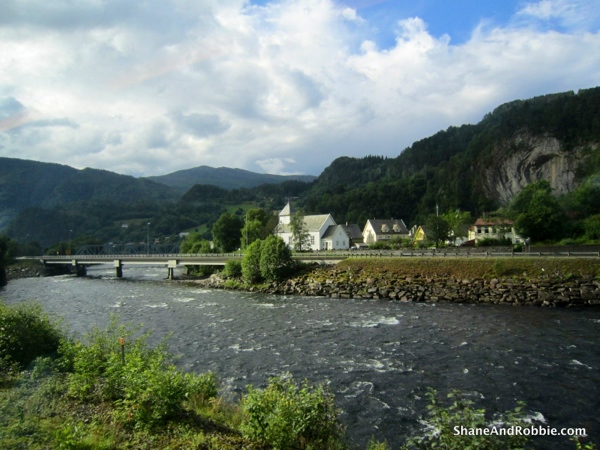 The train stopped briefly in the village of Dale to drop off a few passengers (and give us the chance to snap a quick photo).

We finally made it back to Bergen, 12 hours and innumerable rivers, lakes, mountains, valleys and fjords later.