DAY 63: TO COPENHAGEN FOR THE WEEKEND!

We’re in Copenhagen! It’s been a long day, but it’s great to be here. This city is very cool – we’re enjoying it already and we’ve only been here a few hours. Man was it an expedition to get here though! The plan originally was to to catch the train from Oslo to Copenhagen; 6 hours on a train and you’re there. Easy. Except they’re doing track work to the line in Norway and there was no direct rain to Copenhagen. *SIGH* So instead we had to get up way too early so we could get on the 6:30am bus from Oslo to Halden (a little town in Norway near the Swedish border); then catch the train from Haldun to Gothenburg (Sweden); then change trains in Gothenburg for Copenhagen. Not too bad really, just long (we got here at 4:00pm). Still, the views were lovely. 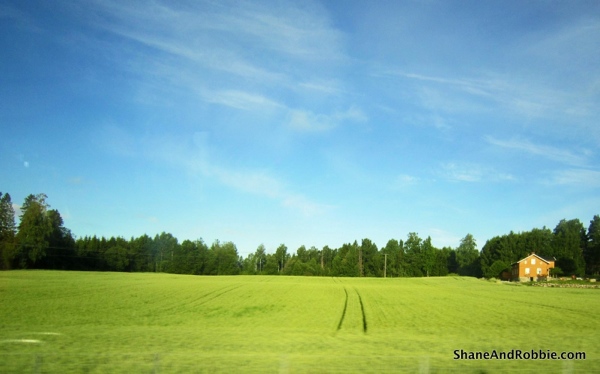 An example of what we saw today as we travelled from Oslo to Copenhagen.

One of the cute little towns we passed through on the bus early this morning. Note how IT’S SO EARLY THAT EVERYONE IS STILL ASLEEP. Today’s train journey took us from Norway, through Sweden, to Denmark.

Halden was quite cute and we got a great view of Fredriksten Fortress, the 16th century fort which crowns the hill behind the town, as we pulled out of town on the train. From Halden to Gothenburg the scenery changed to flat farmlands – this is the flattest land we’ve seen since we crossed into Norway (very different to the massive fjords and epic mountains we saw along the West coast especially). For hours there were golden wheat fields as far as we could see, some being harvested as we sped past.

This part of Scandinavia is so flat compared to the rest of what we’ve seen. You can see how this would have been the “bread basket” area of Norway and sweden for centuries.

From Gothenburg we continued on through Sweden until we reached Malmo which is connected to Denmark via the Øresund Bridge*. As we crossed the bridge we could see sweden behind us and Denmark in front; from the train we could even see the North Sea wind farms that supply Denmark and Sweden with over 220 megawatts of electricity (enough to power 120,000 homes). There were heaps of giant wind turbines all the way along the Swedish and Danish coastline actually; turns out Denmark and Sweden lead the world in alternative energy, with wind being their number 1 non-petroleum source.

*The Øresund Bridge is a double-track railway and dual carriage-way bridge that links Malmo to Copenhagen. Built in 1999 it’s the longest combined road and rail bridge in Europe (8kms long). The views across the Øresund Strait were fantastic, especially given how sunny it was today.

One of the many wind turbines we saw as we travelled along the Swedish coast today.

The Øresund Strait wind farm, with a sailing ship in the foreground for perspective.

Nine and a half hours of butt-numbing transit time later, we finally arrived In Copenhagen! First goal: find our hotel and check in. Interestingly, it turns out our “hotel” here isn’t really a normal hotel – there’s no reception, no concierge, no staff anywhere! You get a room number and a pin code emailed to you and the building has a touch pad where you enter your pin code to get in. The same code gets you into your room… and that’s it. It’s kind of a funky concept, a “staff-less” hotel; it obviously keeps costs down as our stay here is quite cheap (by Scandinavian standards that is), and we’re happy to do our own thing anyway so it suits us fine. We have a great room on the 4th floor with views of the neighbourhood, though I’m not sure if that’s a good thing or not… Because, you see, our hotel happens to be on the fringes of Copenhagen’s “Red Light District”. As nice as the buildings around us are, some of the shopfronts are rather interesting shall we say. From our window we can see most of the street and it’s quite an odd combination: there’s 4 hotels (including ours), a tattooist, 2 strip clubs, a souvenir shop, a Sizzler-style family restaurant, and a 7-Eleven convenience store. Weird. Still, it seems safe enough and the room itself is great – spacious, clean and very comfortable. See… 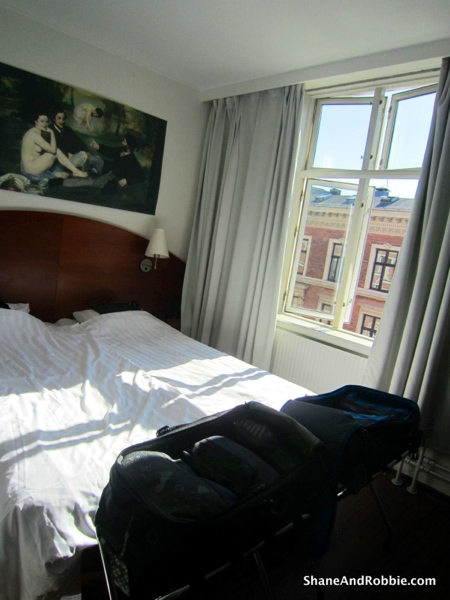 …as well as a mini lounge room and kitchenette. (Don’t mind Shane, he’s just getting dressed.

So this is our home for the next few days in Copenhagen. Ahhh Copenhagen… Capital of Denmark, city of waterfront promenades and canals, and home to Shane’s ancestors. So far, our first impressions of the city are that it is very hip; it may not have Helsinki’s relaxed atmosphere, or Oslo’s epic fjord location, or even Stockholm’s grandeur, but Copenhagen definitely has a funky edge to it. We get into town pretty late this afternoon after a loooong travel day and just had time to explore Vesterbro, the Western part of Copenhagen city.

Vesterbro used to sit just outside the old town of Copenhagen but is now an inner city suburb, characterised as being very multicultural and a tourist hub. This is also where Copenhagen’s “Red Light District” can be found (and where we’re staying, though those things are not in any way connected, I swear!). Not being all that interested in strip clubs and tattoo parlours, we headed straight to Copenhagen’s City Hall and the Tivoli Gardens. Tivoli Gardens is arguably Copenhagen’s most iconic landmark; it’s basically a small amusement park, opened in 1843 and still going today (though with updated rides). The Tivoli attracts over 4 million visitors a year, which makes it one of the busiest amusement parks in the world. On the same site as the park there is also the famous Tivoli Theatre, and just across the road sits City Hall. Walking around City Hall Square we got to see the Dragespringvandet, a large fountain depicting a dragon fighting a bull, and a statue of Hans Cristian Andersen. Famous for his children’s stories (e.g. “The Little Mermaid” and “Thumbelina”), H.C. Andersen is one of Copenhagen’s most famous citizens and there are statues of him everywhere.

The streets were packed with people, tourists and locals alike, and there was a real buzz in the air – this weekend is apparently the last weekend of most people’s summer holidays here so I’m sure everyone was just out making the most of the gorgeous weather, topping up their summer tan. It made for some interesting people watching and a great first afternoon in Copenhagen.

Entry into the Tivoli Gardens. We didn’t go in as it was PACKED and we didn’t fancy waiting in line for an hour for each ride. 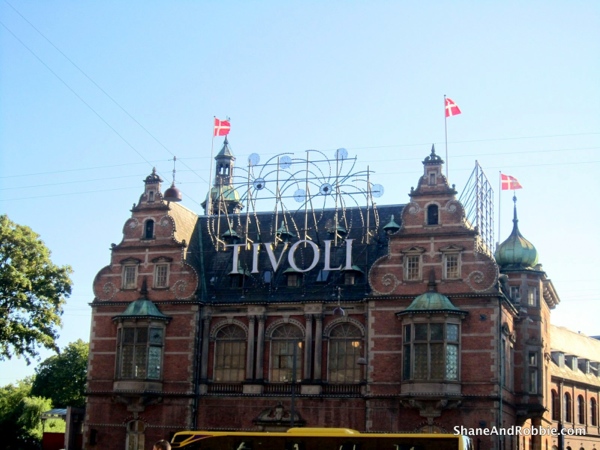 Copenhagen’s City Hall was built in 1905.

The Dragespringvandet Fountain (with City Hall behind it).

And us, hanging out with Mr Andersen. In case you’re wondering, he’s reading a book and looking over at the Tivoli Gardens.

Here’s a few weird and wonderful factoids about Norway we picked up along the way too that tickled our fancy:

And finally we would like to put it out there that, in our humble opinion, having now heard a little of all the Scandinavian accents, we believe Jim Henson got it wrong. the Swedish Chef in The Muppets is NOT Swedish; he is in fact Norwegian.