DAY 75: HAVING A MUNCHEN GOOD TIME!

One pork sausage too many….

Guten abend loyal fans! Day 4 in Germany and we’ve already hit our pork limit. We’ve had it for lunch or dinner for 4 days now – it’s just too much! What really pushed us over the edge today was dinner at Munich’s famous Hofbräuhaus (translation = Royal Brewery House).

The Hofbräuhaus, Munich’s oldest and most famous brewery and pub.

Now owned by the Bavarian government, this famous brewery/restaurant/pub was founded in 1589 and produces one of Munich’s most famous brews. Hofbräuhaus beer became so famous, in fact, that it once saved the city from destruction. When King Gustavus Adolphus of Sweden invaded Bavaria in 1632 (during the Thirty Years’ War), he threatened to sack and burn the entire city of Munich. However, after much negotiation, he agreed to leave the city in peace if the citizens surrendered some hostages, and 600,000 barrels of Hofbräuhaus beer. 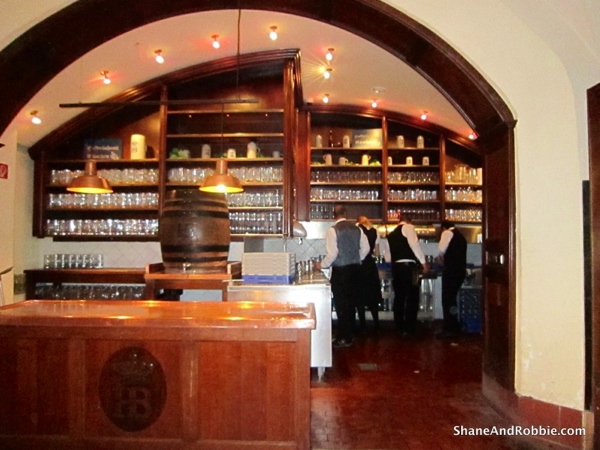 The Hofbräuhaus bar, in a rare quiet moment. Their beer is so famous it once saved Munich from destruction!

The hall itself is immense – the main restaurant can seat up to 1,300 guests, with a further 400 seats available out in the bier garten and 900 more upstairs in the second and third floor “festival halls” (which are like giant function rooms). It was insanely busy when we where there for lunch – the sheer volume of pork schnitzel, pork sausages, pork knuckles and roast pork platters being served was unbelievable. Not to mention the beer! Beers only come in 0.5L or 1.0L steins and the waiters and waitresses were doing an admirable job carrying 8-10 of those massive mugs out at a time. The best bit was, in the centre of the restaurant, there was a genuine oompah band playing lively German songs at us. It was hilarious, busy, noisy and absolutely mad!

The main restaurant can seat 1,300 people!

And the bier garten can seat another 400 people.

We had a “normal” pork schnitzel (i.e. not the 70EURO 1.5kg “challenge” schnitzel they serve!) and a plate of mixed schweinwurst (translation = pork sausages) between us, and Shane sampled a conservative 1.0L mug of the house brew. In his words the beer was: “brewtal” (ahem, nice pun Shane – I believe he’s referring to the beer’s high alcohol percentage there). The beer certainly seemed to make Shane very happy, then put him into some kind of stupor. Mind you, the beer may have had nothing to do with it; Shane’s coma may have been induced by the 6 sausages, half a schnitzel and kilo of sauerkraut he ate! (Not a good combination. Not at all. German food is only for those who wish to die young and flatulent I think.)

Apparently revelry at the Hofbräuhaus in Munich inspired the saying “oans, zwoa, g’suffa” (translation = one, two, down the hatch), and reportedly Wolfgang Amadeus Mozart claimed to have written the opera Idomeneo after several visits to the Hofbräuhaus fortified him for the task. Today Hofbräuhaus franchises have been opened around the world (including Aus), but today we got to experience the original! What a way to the end our day!

Shane samples the local brew at the Hofbräuhaus.

Ending our day on a historical note at the Hofbräuhaus.

Luckily we started our day a bit more high-brow than we ended it! We spent today revisiting some of the sights we saw yesterday we a view to seeing them up close and in a bit more detail. The best of all our museum vistis was definitely the Residenz. The Munich Residenz served as the seat of government and residence of the Bavarian dukes and kings from 1508 to 1918. What began in 1385 as a small castle was transformed over the centuries into a magnificent palace containing stables, kitchens, gardens, courtyards, a music hall and hundreds of richly appointed rooms. Today 130 of the rooms are open to the public and filled with antique furniture, art, porcelain, and tapestries that span the Renaissance, Baroque, Rococo and Neoclassical eras. It was definitely the most impressive museum/palace we’ve seen since The Hermitage in St Petersburg or The Uffizi in Florence. Below are just some of the photos of the highlights… 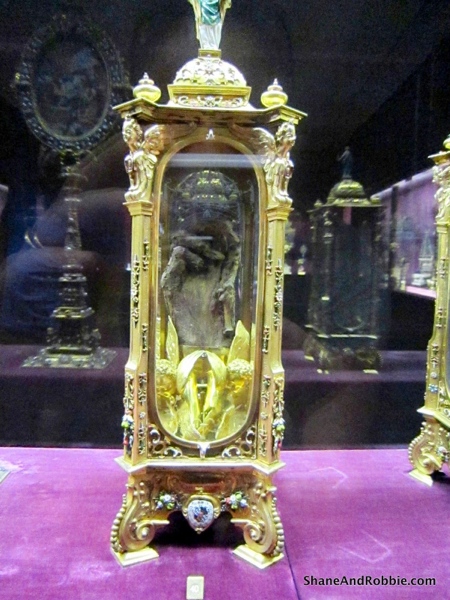 In the Hall of Relics there were lots of body parts, preserved and encases in gold and jewels, like this shrivelled, mummified hand that belonged to some saint or other. Super-creepy!

The Baroque Garden Room has views over one of the palace’s many courtyards.

The Hall of Antiquities was built in 1570 to house the antique collection of Duke Albert V.

One of the many Neo-Classical reception rooms in the palace. 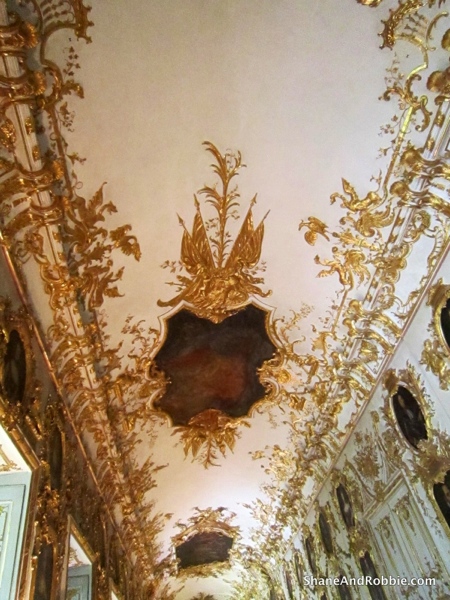 The Ancestral Hall, decorated in the ornate Baroque style, is lined with portraits of the ruling Wittelsbach family that ruled Bavaria from 1180 to 1918. 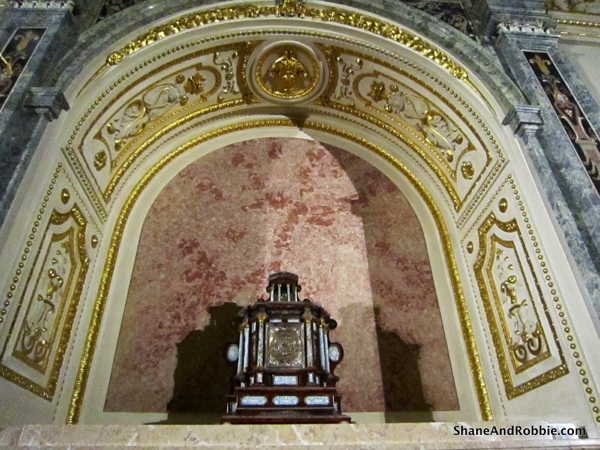 Many of the clocks, statues and decorative pieces of art were placed in beautifully decorated alcoves like this one. 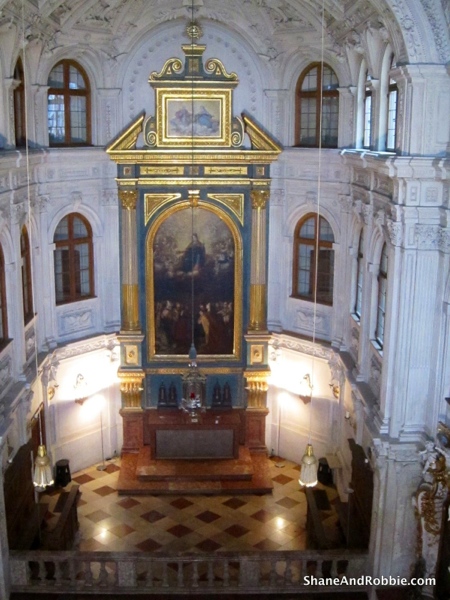 The chapel within the Residenz.

One of the stained glass windows within the royal family’s private chapel, also known as the Ornate Chapel.

The stunning ceiling of the royal family’s private chapel, also known as the Ornate Chapel.

Another stunning ceiling in one of the Queen’s private apartment rooms. 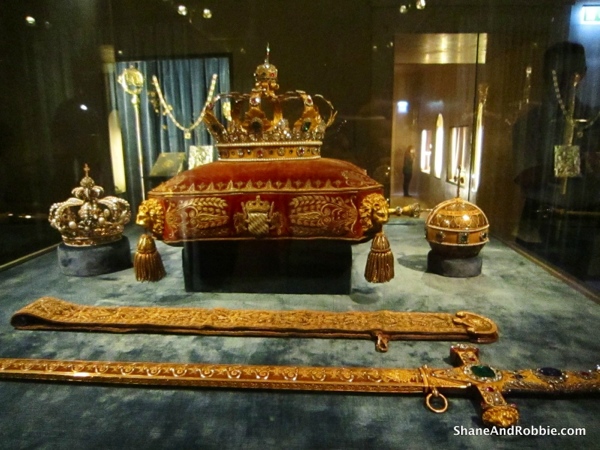 Within the Residenz they also keep all the Bavrian royal jewels, including this Royal Regalia set from 1807… 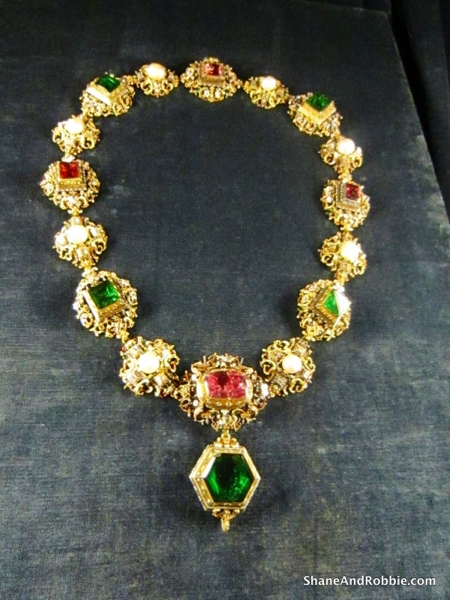 …and this very pretty necklace which belonged to Queen Gisela.