DAY 93: SITTING ABOVE THE CLOUDS AT JUNGFRAUJOCH

Exploring the top of Europe

We caught the Jungfrau Train up to 3,571m today and spent our morning watching clouds boil far below us and playing in summer snow. I know you’re probably sick of us saying this already, but IT WAS AWESOME! 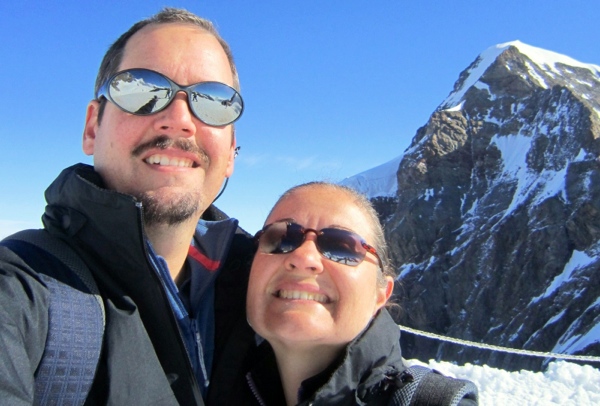 Exploring the top of Europe!

The Jungfrau Train from Interlaken to the top of the mountains is normally about 250CHF per person (about $300AUD per person), which we balked at a bit.  So I did a bit of research and turns out, if you’re keen and don’t mind an early morning start, you can buy a “Good Morning Pass” which halves the cost of the trip. Only catch is you have to leave Interlaken at 6:30am! As we discovered this morning, up here in the valley between all these mountains it’s still dark at that time of day! It was a bit of a rough start, but we made it onto the train on time (yay!).

Barely awake at 6:30 this morning, but at least we made it on to the train up to Jungfraujoch!

We were half asleep for most of the trip up, but then so was the mountain – the tops of the mountains were still all shrouded in clouds and there were no farmers or hikers out and about yet. With the clouds billowing around us it was quite eerie sitting in the train as it snaked its way up the mountains, past little farming and skiing villages. 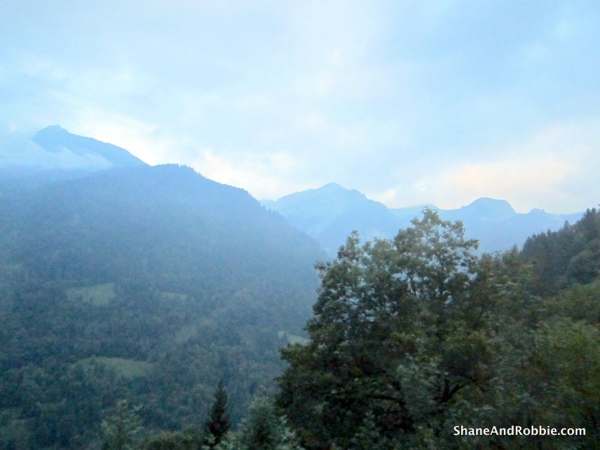 The clouds were still lifting at 7:00 this morning when we got up into the mountains. 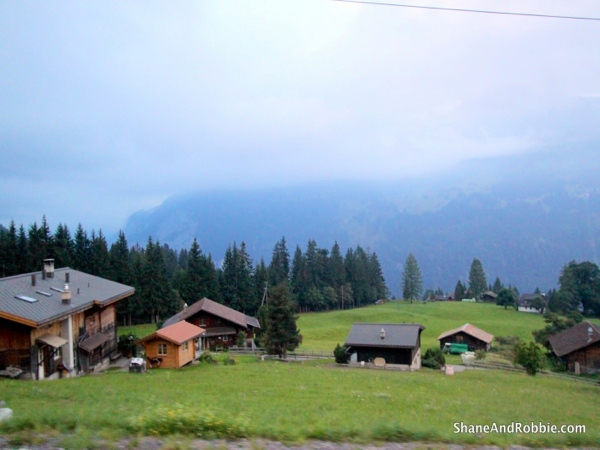 The farming village of Lauterbrunnen was still waking up as we assed through on the train.

It was quite eerie, cutting through the clouds on our way up the mountain this morning.

Watching the morning mists clear away as the day warmed up.

There are a couple of different routes up the mountains (see map below) – we decided to go up via Lauterbrunnen and then down via Grindelwald.

On the way we had to change to a much smaller cog/rack train in Kleine Scheidegg. This small, red bahn (translation = train) chugged its way through 9km of steep railway, mostly through tunnels dug through the mountain itself, to deliver us to Jungfraujoch in about 45 minutes. 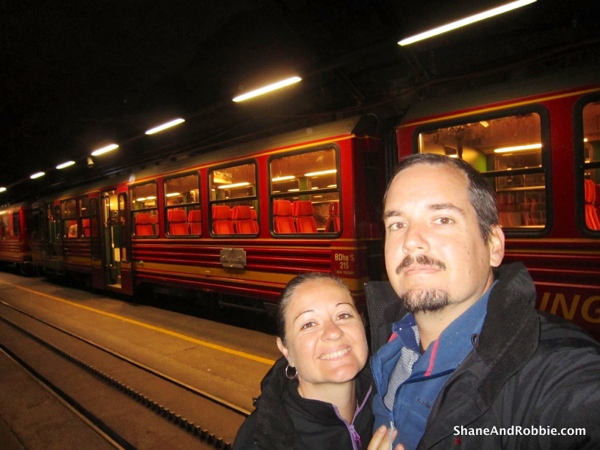 The little red train that delivered us to the top of the mountain.

Due to the morning cloud the visibility in Lauterbrunnen and Kleine Scheidegg was very limited, so we were blown away when we exited the train station and saw this….

Our first sighting of Jungfrau Mountain took our breath away.

The Jungfrau Train was built in the late 1800s and consists of about 20km of railway tracks that climb from Interlaken to Jungfraujoch, high in the Bernese Alps here in central Switzerland. The line’s terminal station at Jungfraujoch is up at 3,571m and is touted as the highest railway station in Europe – hence its famous slogan: “Jungfraujoch: The Top of Europe”. The construction of the railway in the late 1800s took 16 years and was considered an amazing feat of engineering in its time – even today it’s considered one of the world’s premier railway journeys from both a scenic and technical perspective. We were certainly impressed by the views…

These were the views that impressed us so much up at Jungfraujoch. 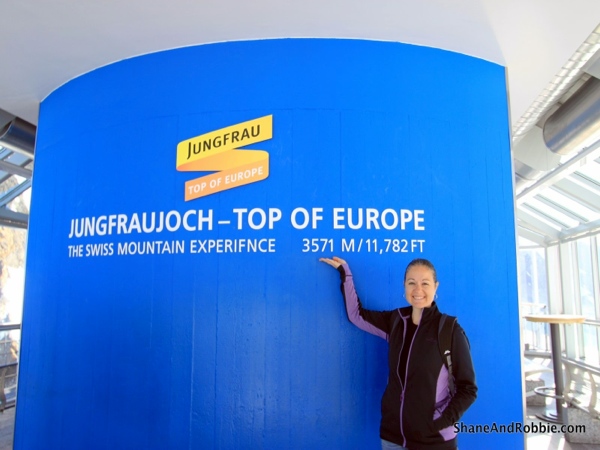 Told you it was the top of Europe!

We went exploring around the mountain – just a bit, it was pretty cold out there!

The Jungfraujoch is a saddle between the Mt Mönch (4,107m) and the Jungfrau Mountain (4,158m) in the Bernese Alps. As well as a railway station there are 3 restaurants there; an “Ice Palace” carved entirely out of ice with ice sculptures in it; a museum dedicated to the construction of the railway; and a “Summer Snow Park” where you can ski, snowboard and toboggan for just 20CHF per person (to put that into context: that’s cheaper than buying a burger!). We checked it all out today, though we forgot our ski and ‘boarding gear so had to pass on snow activities. Everything else was great though – a truly cool (VERY cold in fact) way to spend a morning. 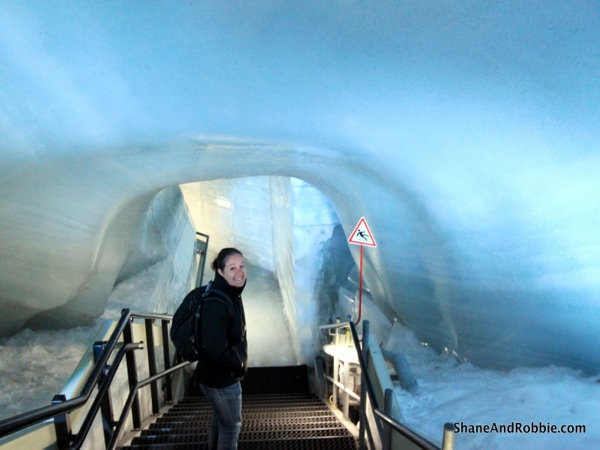 Heading down into the Ice Palace.

One of the cool (icy cold) ice sculptures.

The mandatory cheesy photo inside the Ice Palace.

Sliding around on the ice floors.

Views across the mountains from the Summer Snow Park.

Neither of us have ever had the chance to be up that high (Australia is very flat and even our highest  mountain, Mount Kosciuszko, is more like a hill at 2,228m) and as much as we were awed by the scenery, we also both felt well out of our element. It was extraordinarily cold up there (-7C at 10:00am) and the air was so thin, dry and cold that any exertion seemed to take all our effort. There was no vegetation up that high – no trees, no grass; nothing but snow, ice, rock and wind. It was mesmerising, but quite daunting as well. It’s quite scary how small and squishy we are as human beings really are when you get right down to it – that kind of cold, inhospitable place would squash us like bugs and not even notice our passing.

The view over the Eiger Glacier, with clouds boiling in the background. Enough to remind us how small and fragile we really are – we would not last long out there!

This high mountain landscape is not particularly hospitable. Epic yes, but not hospitable.

Having arrived on the mountain at 9:00am thanks to our “Good Morning Pass”, by 12:00 we were ready to head back down (just as hordes of tourists were arriving – another perk of doing the early morning thing: you get to skip the crowds). So we caught the little red Jungfrau Bahn back to Kleine Scheidegg. Most of the morning clouds had lifted and as we exited from the tunnels we were blessed with some amazing views of the valley below us and the mountains behind us.

Coming back down the mountain to Kleine Scheidegg just as the clouds were lifting. 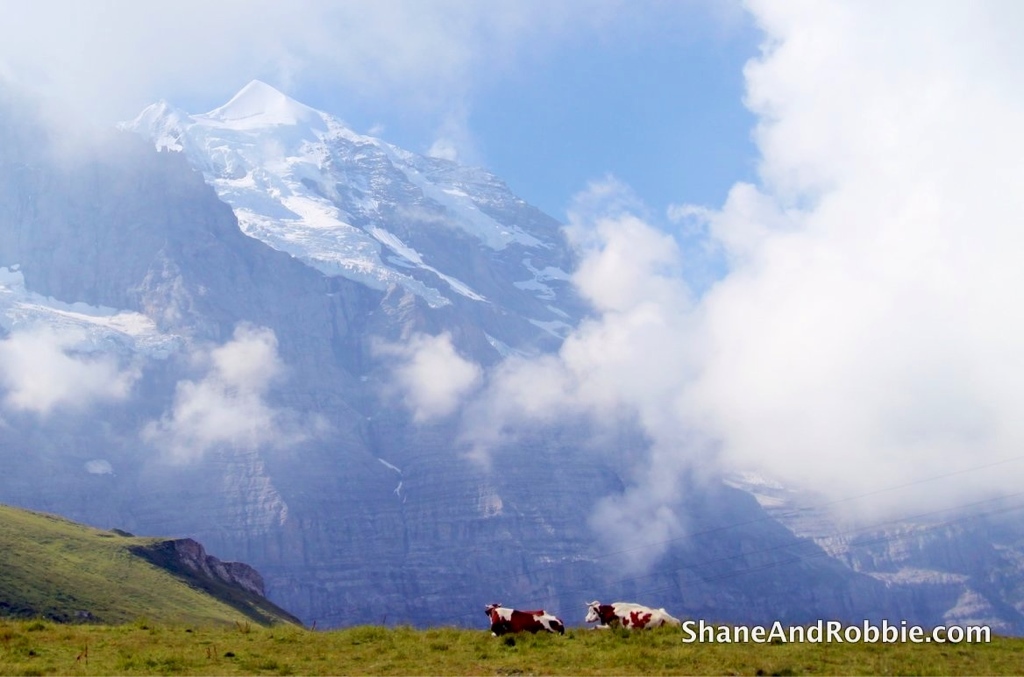 Does a view get more stereotypically Swiss than this?!

We were just about back in Kleine Scheidegg when the train came to a grinding halt. Curious as to what was going on we stuck our heads out the window and saw one of the funniest things of the day: a cow had wandered on to the train tracks (they were everywhere on the mountain – with no fences stopping them from wandering where ever the grass was greenest). The train driver then proceeded to get out of the train and try and encourage the cow to find some other grass to munch on. The cow REALLY wanted the grass on the tracks though and it took a few minutes and a fair bit of shoving before the driver finally managed to convince this particular bovine to move along. It was hilarious! (Note: No cows were harmed in the process and the train driver seemed to be chucking as much as all the passengers at the predicament he found himself in.)

Train driver gets out of train to gently convince cow to munch on elsewhere.

Cow refuses to move, train driver ends up having to unceremoniously shove it off the track.

We then changed trains in Kleine Scheidegg and proceeded downhill towards Grindelwald. The scenery gradually became more and more “civilised” (i.e. farmland and villages,not ice and snow), but was no less beautiful.

Enjoying the views of the valley as we head down to Grindelwald. 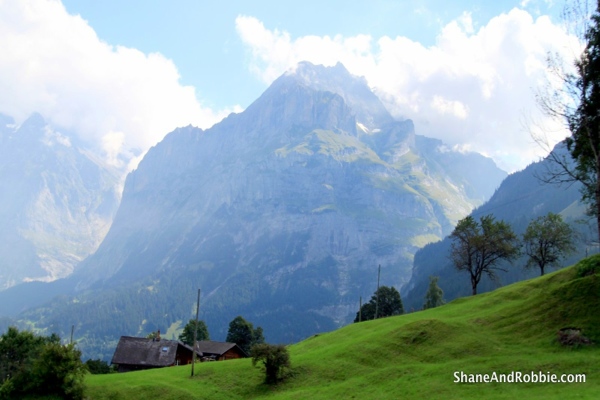 The views on the way down to Grindelwald made me want to sing “The hills are alive with the sound of music…”. Shane said I shouldn’t though as it would be a long walk home… 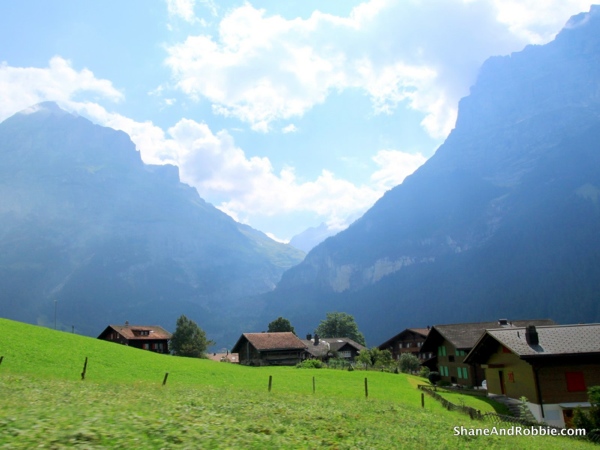 More hills that should have been, but weren’t, alive with the sound music….

The village of Grindelwald appeared below us.

Rather then just go back to Interlaken though we decided to hop off in Grindelwald and have lunch at a local restaurant. At this point I must point out, if you are ever in Switzerland, please be wary of the cheese fondues on offer. They are everywhere – it’s a national dish after all. If choosing the cheese fondue, just know that they might TASTE fantastic, but will leave you in a cheese-induced coma that you may take hours to wake from. Trust us, we discovered this today.

The only cure for Swiss cheese fondue induced coma.

We had had ideas of hiking the rest of the way from Grindelwald back to Interlaken, but the cheese fondue-induced coma ended all such ideas. Instead we caught the next train down the mountain and happily watched the scenery gradually become more and more civilised until we finally reached Interlaken and the “comfort” (I use this term very loosely here) of our river-side camp site/caravan park. Ahhh, just another magnificent day in Switzerland…

So much for hiking back to Interlaken from Grindelwald… 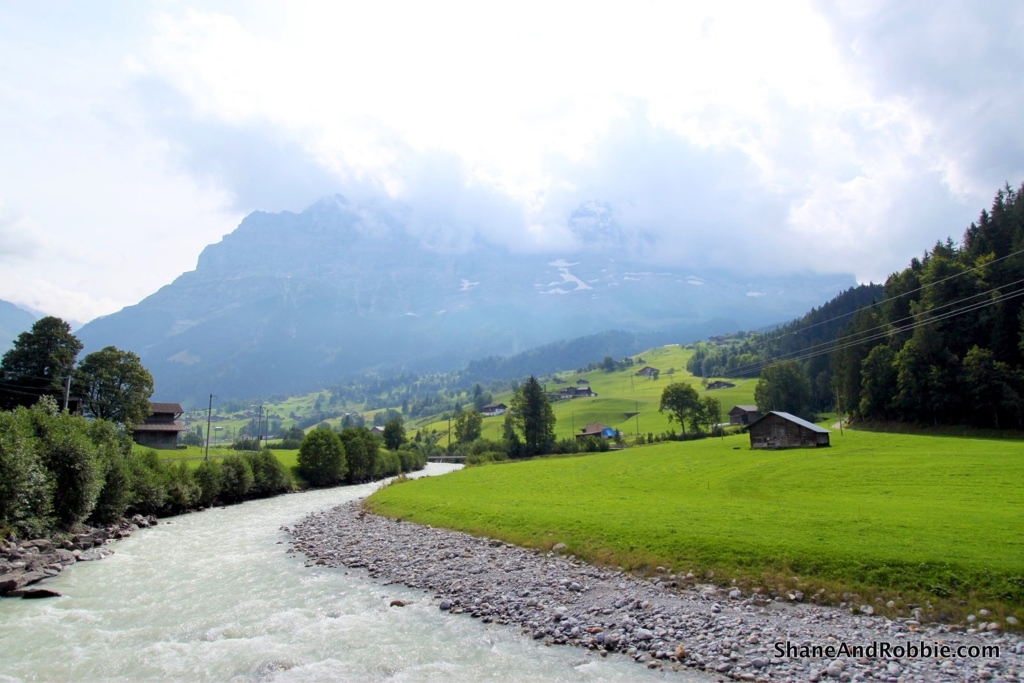 Still, the views back through the valley on the train ride back to Interlaken were pretty spectacular.

Just another magnificent day in Switzerland!