Welcome blog fans to the 100th day of our adventure! It’s hard to believe we’ve been at this for 100 days already – time really does fly when you’re having fun it seems…

This is what our 100th day of travel & adventure looked like….

Our incredible run of perfect Swiss weather came to a stop today; we woke to clouds, drizzling rain and an icy wind that definitely spoke of winter coming. Great weather for a sleep in and reading the paper in bed right? Unfortunately neither of us understand German well enough for the local newspaper to be of much use to us, and as nice as the idea of a sleep-in was, we had a train to Zurich to catch! *SIGH* Life sure can be tough sometimes can’t it?!

We left St Moritz and the Engaldine Valley a little wetter than when we arrived.

It took about 4 hours to get from St Moritz to Zurich and it rained the whole time, making for a rather subdued journey. The scenery was still nice, but certainly not as breath-taking as some of the sights we’ve seen in Switzerland over the past fortnight. Once we left the Engadine Valley and its many mountain peaks behind the terrain quickly became very flat and much more densely populated that anywhere we’ve been in Switzerland far (in fact some 66% of Swiss people live on the Swiss Plateau, which extends roughly across the North of the whole country, from Zurich in the East to Geneva in the West).

Coming down into the more populous Swiss Plateau.

We changed trains in the small industrial town of Chur and were soon speeding along the Eastern shore of Lake Zurich. This 29km long, 4km wide lake is fed by the Linth River and, like all the lakes we’ve seen in Switzerland, is incredibly clean, clear and blue – that beautiful aquamarine that speaks of glacier melt and cold, cold water. Zurich is the only major city on the lake, though there we passed small villages all along the lakeshore. 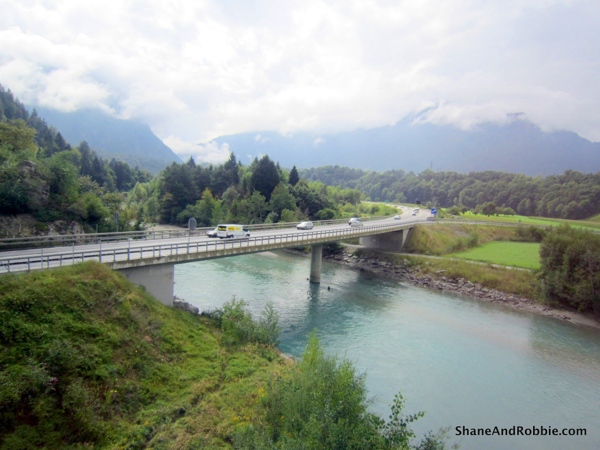 We arrived in Zurich in time for a late lunch (8CHF/10AUD for a ham and cheese sandwich – yikes!), just as the sun was poking through the clouds. Once we’d checked in to our quaint little hotel and gotten settled in, we decided to head straight to the lake and see if we could catch a boat for one of the afternoon lake cruises. We’ve learnt not to take sunshine for granted – take it while it’s there because you never know what weather tomorrow might bring…

Heading down to the lake while the sun lasts.

Fortunately the sun hung around and we spent a very comfortable afternoon enjoying its warmth whilst cruising Lake Zurich. As we pulled out of Zurich we could see the altstadt (translation – old town) and the city’s famous bridges and churches silhouetted against the afternoon sun (we have set tomorrow aside for exploration of the old town).

Pulling out of Zurich, leaving the altstadt behind.

Lake Zurich laid out in front of us. 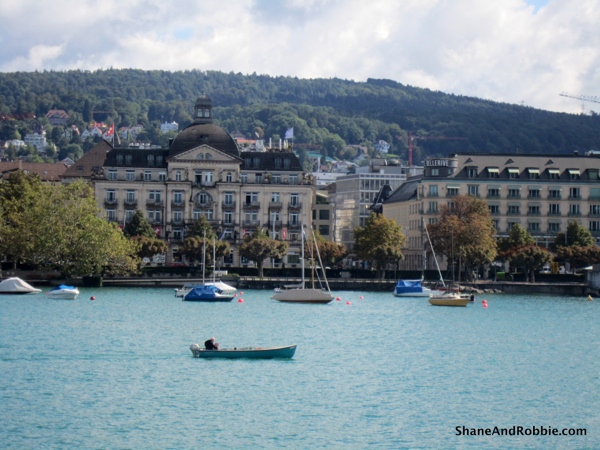 Sailing past some of Zurich’s old stately buildings.

The boat pulled in at a few of the villages along the lakeshore, including Kilchberg-Bendlikon where Lindt have their chocolate factory. You can do a tour through the Lindt factory which includes “free” samples (you pay about 10CHF for the tour so I’m sure the cost of the samples is well and truly covered in your entry fee); given Shane’s predilection for chocolate-nomming, however (think Cookie Monster but with chocolate), I thought this would be a VERY BAD IDEA. Shane was most distressed when he later discovered we had missed the stop for the Lindt factory. 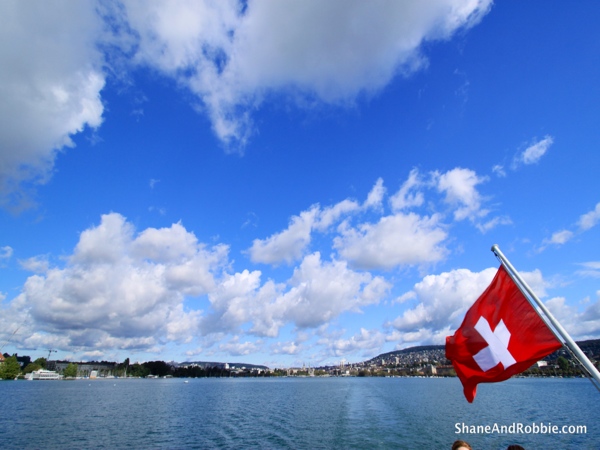 A lovely afternoon for a lake cruise…

The village of Kilchberg-Bendlikon, home to the Lindt chocolate factory.

Once we were safely past the Lindt chocolate factory I told Shane what was back there. He wasn’t very happy with me.

Besides Kilchberg-Bendlikon we also stopped in at Ruschlikon, Thalwil, Kusnacht and Zollikon – all small villages built long the gently sloping shores of Lake Zurich where the city’s well-to-do have holiday homes and summer retreats. The hills all around the lake are covered in orchards and vineyards, making from some lovely Sunday afternoon strolls. 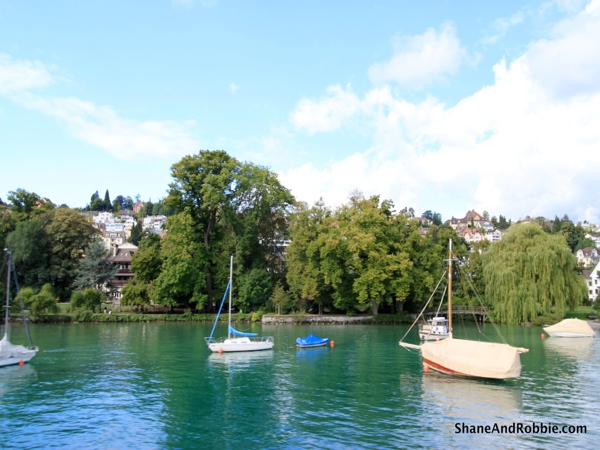 We pulled into a number of small villages lining the lakeshore.

The village of Ruschlikon is one of the oldest villages along the lakeshore. Many wealthy Zurichans have holiday homes in villages like this. 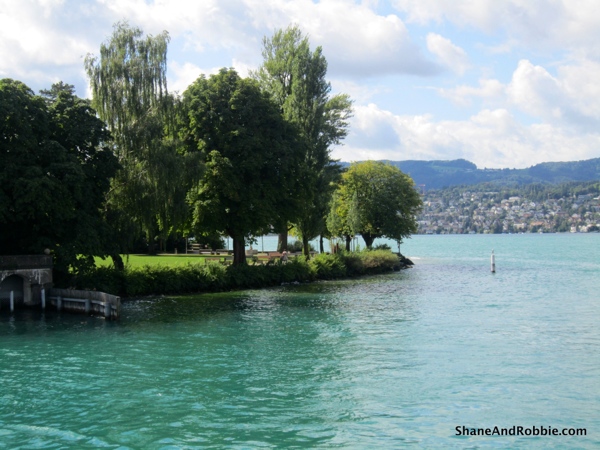 The lake waters are crystal clear and very clean, though very cold.

We got back to Zurich city in time for an early dinner and a quiet night in watching the Swiss news, where everyone was talking about the up-coming referendum* and the need to vote “yes” to legalise sausages. Errrr…., at first we thought it was our German that was off – I mean, from what we’ve seen sausage seems to be quite legal already in Switzerland. So we double-checked our translation and bratwürste legalisieren definitely translates to “legalise sausages”. Legalising sausages is a matter for referendum?! We had to know more…

*Like in Aus, the Swiss system of government allows for citizens to vote on changes to the constitution via referendum, something they apparently get to do a lot.

So it turns out the matter being voted on has to do with labour laws. Sausages are obviously not an illegal commodity in this country; the bratwurst in this context is merely symbolic and part of a campaign to change the law around shop opening hours. At the moment, food shops in Switzerland operate Monday to Saturday, and only during the day, with very few open on Sunday and/or after 7:00pm. Currently shops that DO open late are only allowed to sell products which can be directly consumed upon purchase. This means that, for example, they can sell boiled eggs but not fresh eggs, cooked sausages but not raw ones, etc. This is the sausage law they want to change. Makes perfect sense! Needless to say, reading about Swiss referendums and reviewing the on-line news about the Australian election results (Tony Abbott as PM – seriously?!) has quickly put us to sleep. So gute nacht until tomorrow blog fans!