A day trip into the Salzkammergut

They promised us sun today and after a couple of days of cold, wet weather, we were very excited at the thought of some sunshine. To make the most of the promised solar rays we booked ourselves on a tour out to the Salzkammergut to see some epic mountains and lakes. It was most certainly epic, though that sun they promised us…, well.., let’s just say we saw the sun and felt its warmth on our skin for about 30 minutes, whereas we got rained on and snowed at for about 8 hours. That’s right people: we got snowed AT* today.

*I say “snowed AT” because “snowed ON” implies the snow was falling down gently from the sky. Today we had snow being pelted at us from every side, and with a brisk wind to help keep the temperature down below 0C, it definitely felt like we were getting snowed AT, not ON.

Getting snowed AT today. So much for the promised sunshine!

The Salzkammergut is a mountain and lake holiday area to the South of Salzburg; it is home to numerous alpine peaks, 76 alpine lakes and one of the oldest salt mines in Europe. The salt mines of the Salzkammergut have been mined for about 3,000 years and helped keep the Archbishop Princes of Salzburg rich for centuries (the name Salzkammergut literally means “estate of the salt chamber”). Salt mining is an integral part of the history of this region and, as we learnt today, during medieval times, salt was worth as much as gold. Apparently is was customary, from Roman times right up to the 18th century, to pay workers and soldiers their wages, at least in part, in salt. So important was salt that the very word “salary” includes a reference to this “white gold” (sal = Latin for salt). With the advent of refrigeration we just don’t have the same need for salt as we once did and many of the old salt mines around Salzburg have been closed, though you can still take a tour of the mine if you’re keen to see how horrendous conditions were for the salt miners. We chose not to explore the salt mines but to climb up to 1,834m instead. That, ladies and gentlemen, is a decision we lived to regret.

The mountains, salt mines and lakes of the Salzkammergut.

The Salzkammergut region includes a small pocket of land that is today part of Germany but was once part of the independent state of Salzburg. With the Schengen Agreement in place, country borders are virtually insignificant these days so we didn’t even notice when we crossed into Southern Germany today to visit one of the region’s most famous mountains: the Kehlsteinberg. This mountain is particularly well known because this is where the Nazi Party built its secondary headquarters and where the Kehlsteinhaus (translation = Eagle’s Nest) can be found.

The Kehlsteinhaus sits up at 1,834m altitude and was built as an extension of the Nazi Obersalzberg headquarters which is further down the mountain at around 800m elevation. The Kehlsteinhaus was built by the Nazi Party as a 50th birthday present for Adolf Hitler to serve as a private retreat, and a place for him to entertain visiting dignitaries. The building is reached first via a special bus that takes visitors from Obersalzberg up a narrow 6.5km winding road to the Kehlsteinhaus Base Station, and then by elevator. That’s right” elevator! We climbed the 124m of the ascent in a large, brass elevator that is powered by an original WWI submarine engine (the elevator shaft is bored directly through the mountain). The story goes that the elevator was lined with brass and mirrors to make the inside seem bigger than it is as Hitler was claustrophic. Apparently he was also a little acrophobic and only ascended to the Eagle’s Nest a dozen times as the heights made him very uncomfortable.

Looking up to the Eagle’s Nest from Obersalzberg before getting on the bus up.

The entrance to the tunnel that leads to the elevator up to the Eagle’s Nest.

The building itself, the road from Obersalzberg and the elevator + shaft were constructed over a 13 month period and completed in the summer of 1938. The cost is estimated to have been the equivalent of 100 million Euros (about $150 million AUD) in today’s terms. The Eagle’s Nest was designed to provide amazing 360 degree views of the surrounding mountains and lakes. This is what the views look like on a good day apparently: 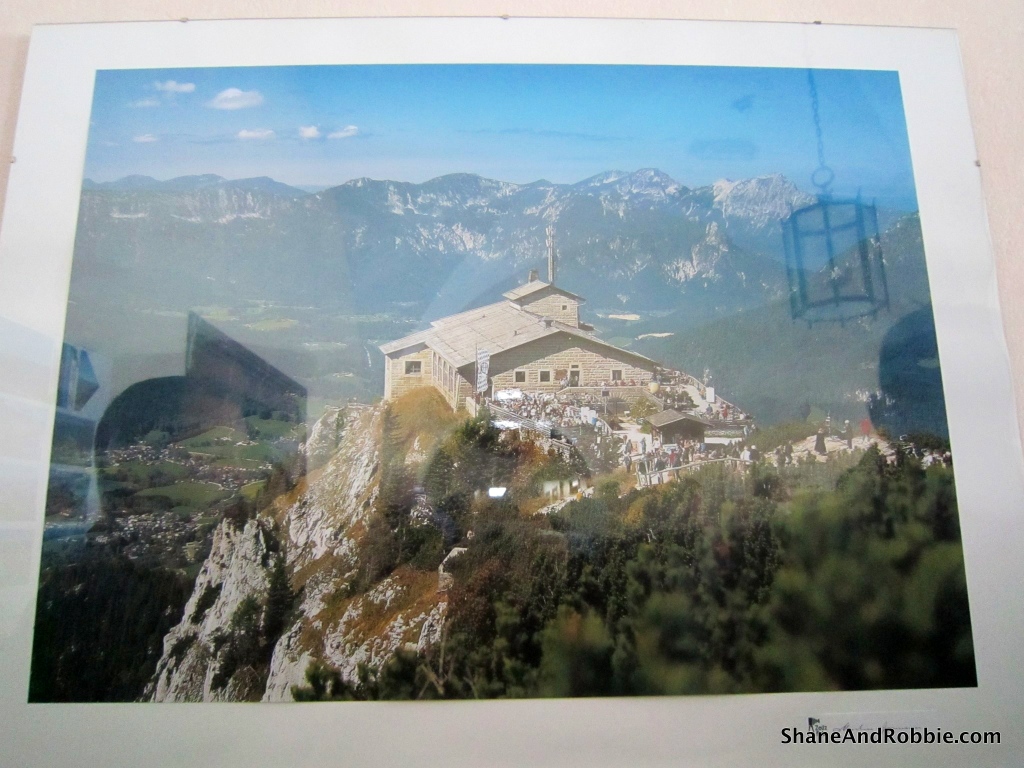 A photo of a photo showing how awesome the view is on a good day.

This is what we saw:

Our epic view from the Eagle’s Nest.

*SIGH* It was seriously cold up there and not scenic at all. Apparently it is very unusual for there to be so much snow down so low so early in the autumn (they had 20cm fall in 24 hours with the snow-line being down to 1,300m). Lucky us?!

Not so scenic, just cold. 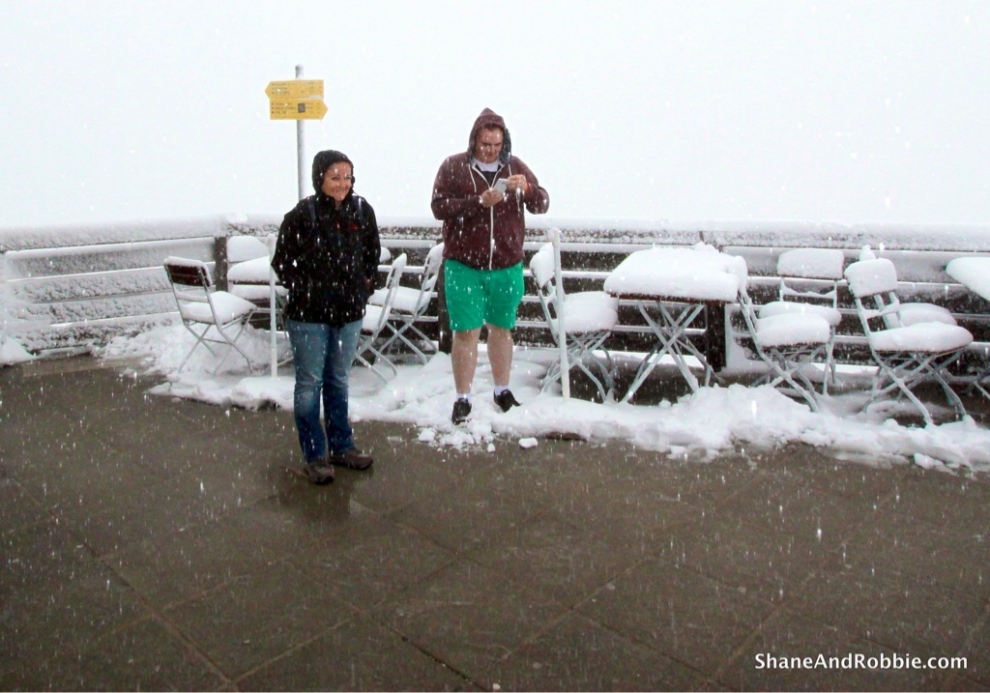 Enjoying the view from the Eagle’s Nest. (The crazy guy next to me, by the way, is an Aussie who was on the tour with us. He went up there is SHORTS. Insane!)

The Eagle’s Nest is a restaurant today. I’m sure dining outside al fresco is lovely on a warm, sunny day. Today not so much – it would be dining al freddo.

We were quite happy to get back down off the mountain and continue our tour on to Berchtesgaden for lunch. This small village is a popular ski holiday destination in winter and a hikers paradise in summer. In autumn it is neither and thus quite quiet. We stopped here for about an hour and enjoyed a hearty, warm lunch before continuing on. 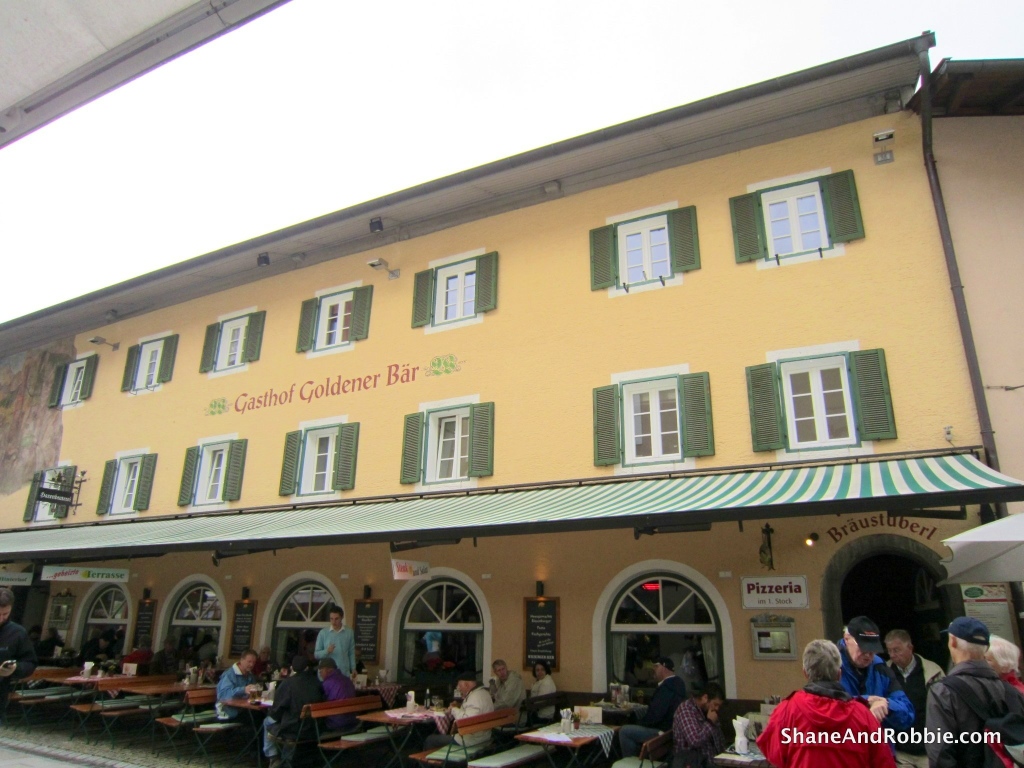 Our lunch venue in Berchtesgaden. At least it was just raining here, not snowing.

The village of Berchtesgaden.

We drove back over to Austria for the afternoon to see some of the lakes of the Salzkammergut and this is when the sun deigned to reveal itself for a few glorious moments. We drove to Wolfgangsee (translation = Lake Wolfgang) and stopped in at the tiny village of St Gilgen, whose only claim to fame is that Mozart’s mother was born there (it was a cute enough town, but very small). From St Gilgen we hopped on a boat and cruised around the lake to the town of Sankt Wolfgang. The lake itself was as spectacular as only alpine lakes can be; surrounded by mountains the lake is a beautiful aquamarine colour.

Watching the sun poking out from behind the clouds.

It was still sunny when we reached Sankt Wolfgang and it was wonderful to stroll through the village basking in the warmth of the sun. The town and the lake are named after Saint Wolfgang, who, according to legend, built the first church here in the late 10th century. The 15th century cathedral in the centre of Sankt Wolfgang was built atop the original church and was rather impressive, given how small the village is.

Pulling into the village of Sankt Wolfgang.

Views of the lake from Sankt Wolfgang – THIS is why we wanted to see the Salzkummergut!

What a great spot for a summer holiday home!

What a great spot to lounge around (when it’s warmer)!

Sankt Wolfgang was our final stop on the tour; from there we drove back to Salzburg past rolling green hills, precipitous mountains and a couple of other lakes. With the sun glinting off the wet roads the drive back to town was lovely and warm. Pulling into Salzburg under brilliant blue skies the morning’s rain and snow falls seemed a world away. Pity we’re leaving Salzburg tomorrow – it would have been nice to see more of the city at its sunny best. Oh well, at least we didn’t get hailed on! 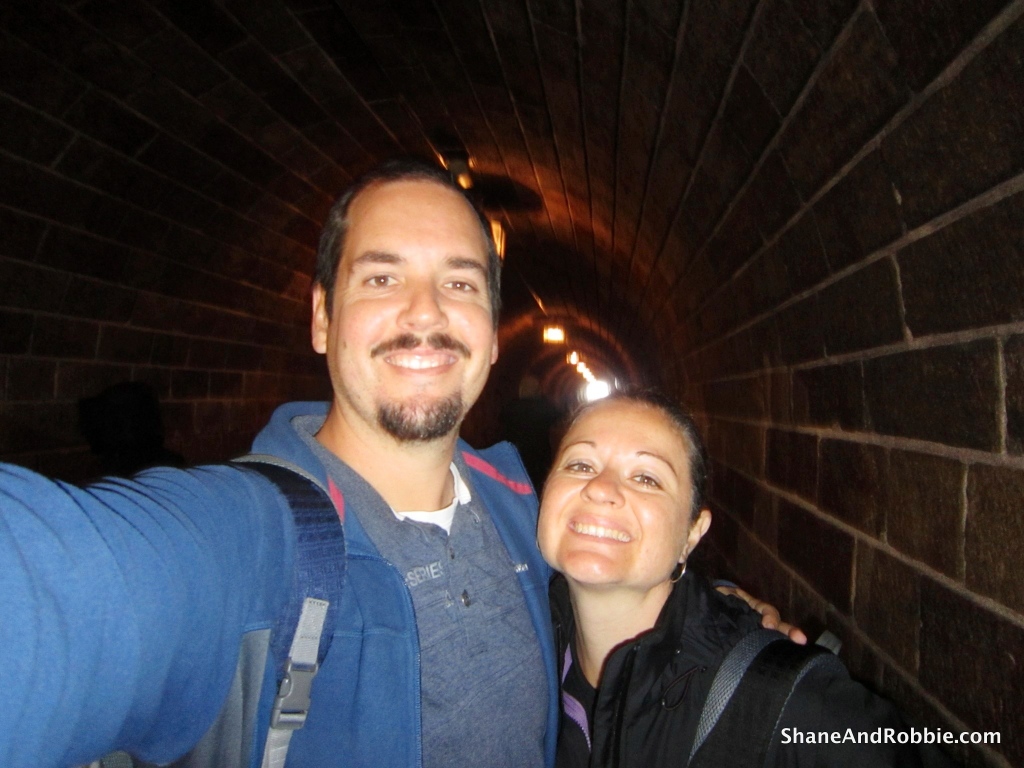 Hoping for a better day tomorrow!