DAY 112: ALL THE MAJESTY OF THE HASPBURGS

So many museums, so little time!

If you’re a lover of history, architecture, art, music and/or opera, chances are you’d love Vienna. This city is jammed full of interesting museums and historical sights; it was tough choosing between all of Vienna’s offerings but we eventually decided to focus on Hofburg Palace for today.

Hofburg Palace is the vast former imperial residence of the Haspburgs here in Vienna; it was their primary winter home and where they held court as Emperors of the Holy Roman Empire and then as rulers of the Austrian and Austro-Hungarian Empires. Since 1918 the palace has served multiple purposes with the various wings allocated different functions; some wings are museums, some are administrative offices and one wing is the official residence of the Austrian President. As much as we would have linked to visit the President we opted to check out some of the Hofburg’s museums instead. In particular we went to the Imperial Treasury Museum, the Spanish Riding School, the SiSi Museum and the Kaiserapartements. 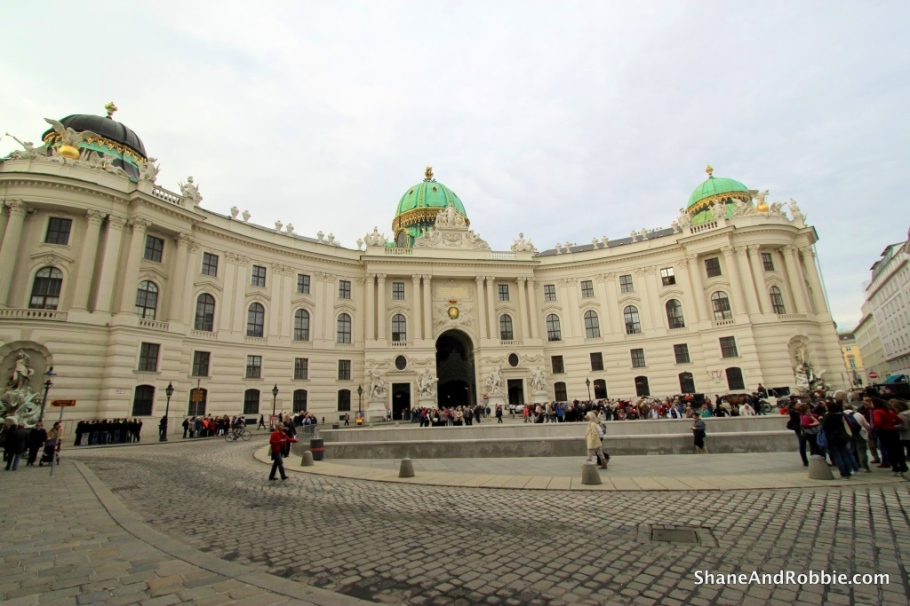 Our focus for today: the museum wing of the Hofburg Palace.

The Kaiserapartements are essentially a restored section of the Hofburg that demonstrate how the Haspburgs would have lived in the 19th century. Needless to say the apartments were opulent almost beyond belief, with the display of the royal  crockery and silverware being the most extravagant displays of wealth we’ve seen since the Hermitage in Russia! The story of the Haspburgs unfolded as we moved from room to room and learnt how this family came to power, expanded their influence and then gradually faded away (see below for the Haspburg story, if you’re interested).

The grandeur of the Kaiserapartements. 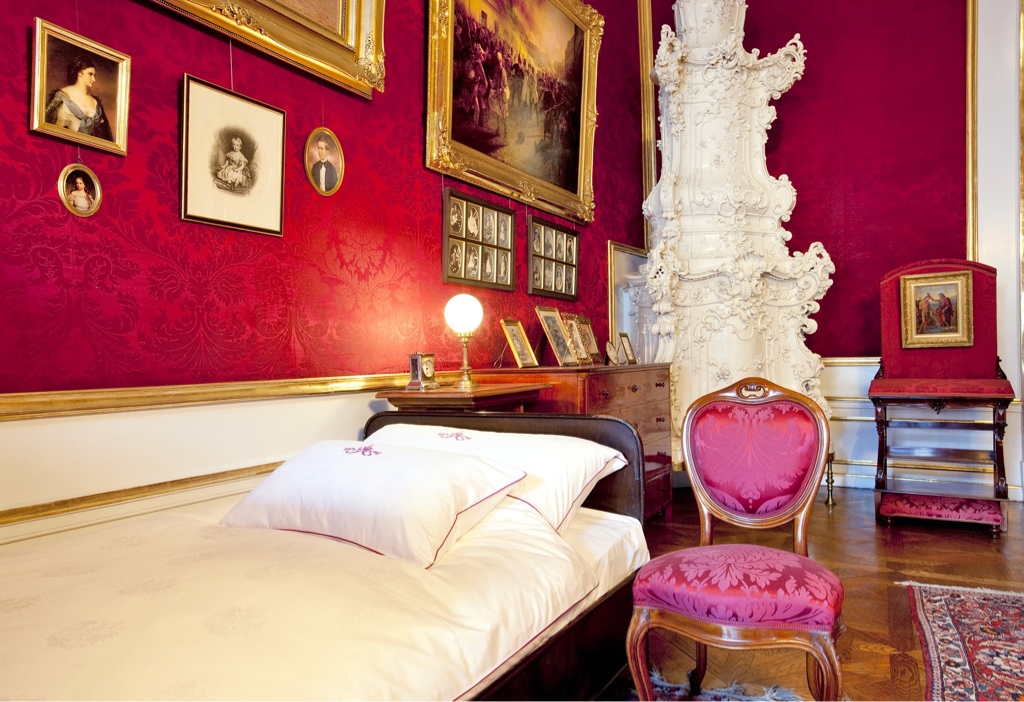 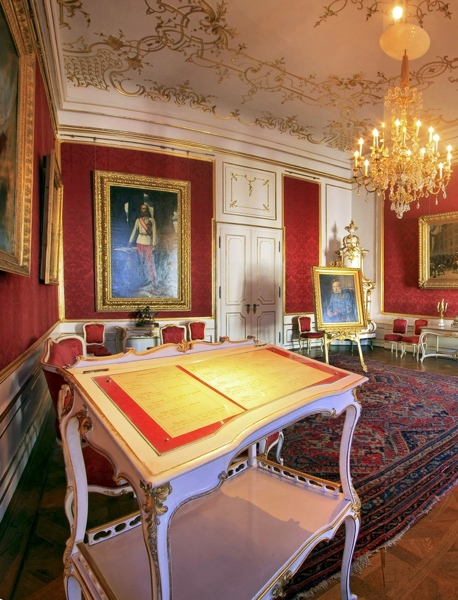 I told you these Haspburg’s were rich! This is just one of the Hofburg’s 800 off rooms. 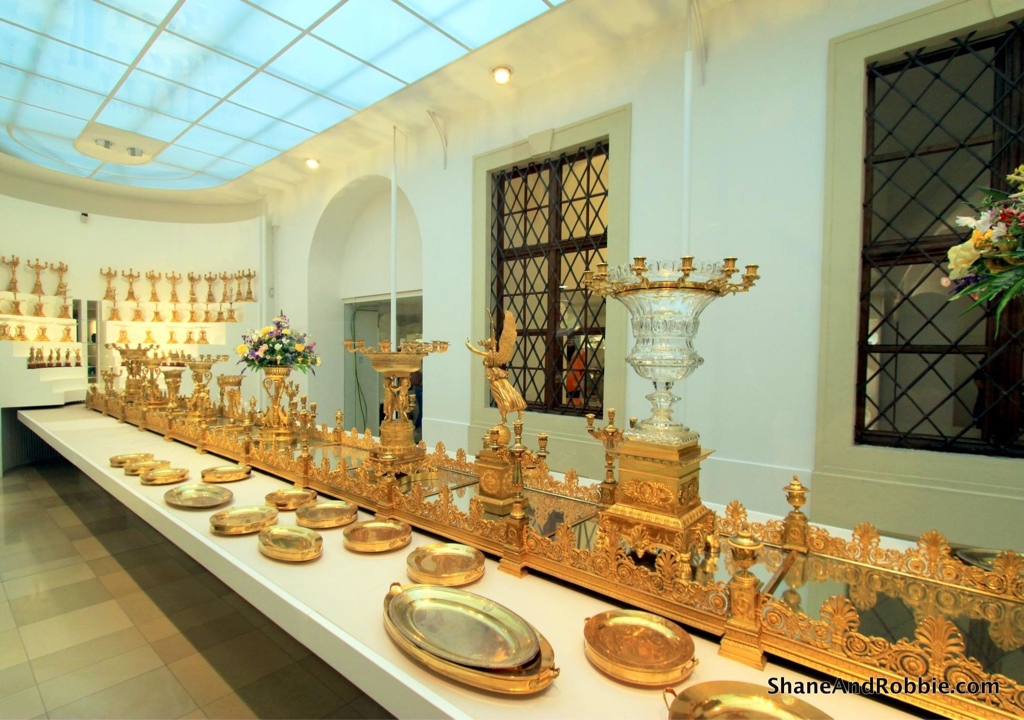 Just setting the table for an intimate family dinner…

These golden candelabras were part of a set of 150 made to order for the Haspburgs in the early 1800s.

Haspburgs were originally Counts of Breisgau which a county in modern-day Switzerland.  The first documented use of the royal line has been traced back to 1108. The Habsburgs expanded their influence through arranged marriages and by gaining political privileges. They were also able to gain high positions in the church hierarchy for their members. Territorially, they often profited from the extinction of other noble families.
In the second half of 13th century, Count Rudolph IV Haspburg gained the rulership of Austria, which the family then held for over 600 years, until 1918. Then, in 1440, Count Frederick III Haspburg was crowned the Holy Roman Emperor in a grand ceremony held in Rome. While in Rome, Frederick III married Eleanor of Portugal, enabling him to build a network of connections with dynasties in the west and southeast of Europe. After Frederick III’s coronation, the Habsburgs were able to hold the imperial throne almost continuously for centuries, until 1806.
To further their political ambitions, in 1497 Phillip Haspburg married Joanna of Castile, heiress of Castile, Aragon and most of Spain. Phillip and Joan had six children, the eldest of whom became Emperor Charles V and inherited the kingdoms of Castile and Aragon, including their colonies in South America and Italy. By this stage the Haspburgs controlled half of Europe, as well as half the known world. Finally, the foundations for the later empire of Austro-Hungary were laid in 1515 by the means of a double wedding between the Hungarian Prince Louis and Princess Mary. This ensured the Haspburgs also became Kings of Bohemia and Hungary. It is said that the Haspburgs had an empire “upon which the sun never sets”. Reading through all this history at the Hofburg Museum today it became blatantly apparent that the Habsburg Dynasty achieved a position as a true world power in the 15th and 16th centuries.
On August 6, 1806 the Holy Roman Empire was dissolved under the French Emperor Napoleon I’s reorganisation of European borders. However, the Haspburgs retained the crowns of Austria, Hungary, Bohemia, Dalmatia, Croatia, Slavonia, Salzburg, Transylvania, Tyrol and Friule, amongst others. Even these territories were gradually lost to them though as each nation sought independence and the family began to shrink, with each successive generation suffering from more and more health problems and having fewer and fewer children.
The Habsburgs sought to consolidate their power by the frequent use of consanguineous marriages, with ultimately disastrous results for their gene pool. Marriages between first cousins, or between uncle and niece, were common-place in the family. It has been suggested that inbreeding directly led to their extinction; that is, the gene pool eventually became so small that the last of Haspburg Emperor, Charles II, who was severely disabled by genetic disorders, possessed a genome comparable to that of a child born to a brother and sister. 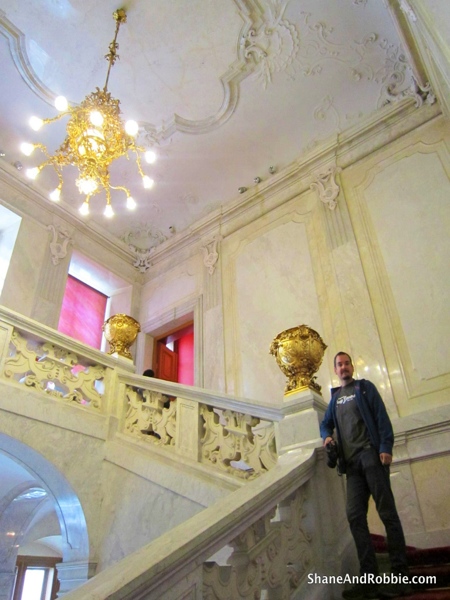 The main staircase in the museum wing of the Hofburg. Stunning!

Alongside the Kaiserapartements is the Imperial Treasury Museum which holds all the Haspburg crown jewels, as well as a thousand years worth of ecclesiastical treasures. The Imperial Treasury Museum was incredible – all together there were 21 rooms of gold, silver, gems and rare treasures gathered by the Haspburgs over the centuries. This included The Imperial Crowns of the Holy Roman Empire and of the Austrian Empire, as well as more jewels than we could have possibly imagined. them Haspburgs were RICH man! It was actually quite overwhelming, all that display of wealth. At a certain point we just started glazing over – it was just all soooooo sparkly…..

The Imperial Crown of Austria.

That, ladies and gentlemen, is an emerald. Uncut and unpolished, but very impressive none the less.

For a slight change of pace we then went to see the Spanish Riding School. Most people would instantly recognise the white horses trained here, even if they didn’t recognise the name of the school. The Spanish Riding School is a traditional riding school for Lipizzan horses, which used to perform for the Emperor and his court. First established in 1572 the school trains horses to move in time to music and to perform particular steps. The horses were beautiful and,although we didn’t see an actual performance, just seeing them train was impressive. Interestingly, the movements the horses are trained to perform were developed to aid in battle and strengthen the war horse’s body and mind for war.

The entry to The Spanish Riding School, Vienna. 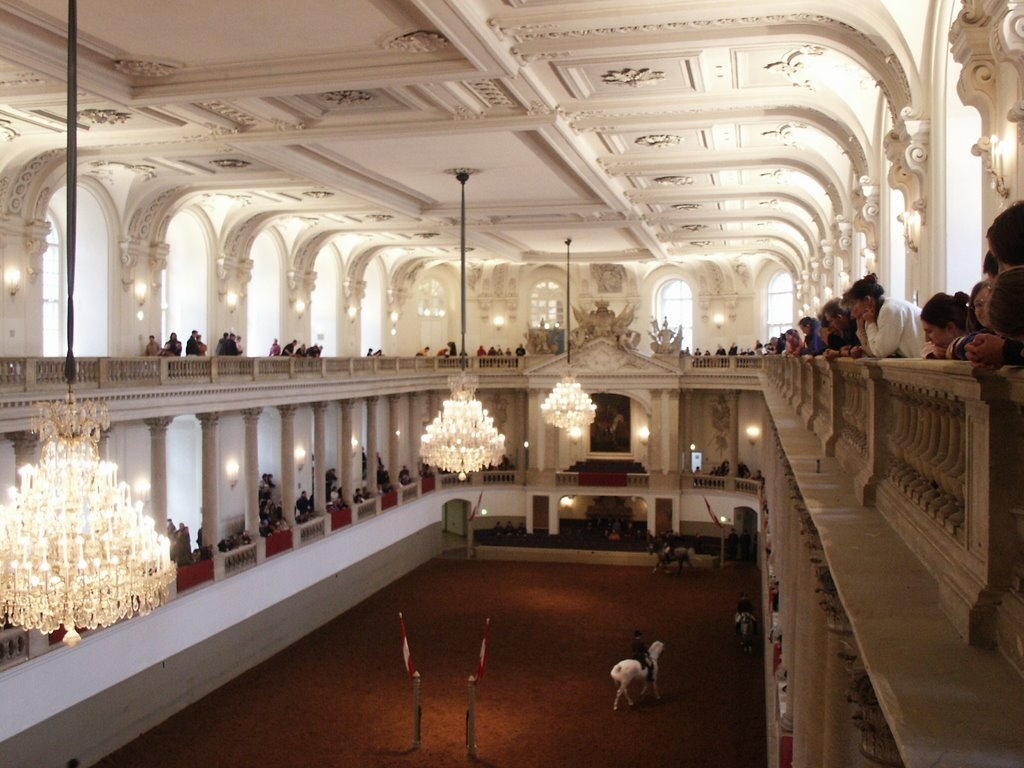 Watching the horses train at The Spanish Riding School.

The final museum we entertained ourselves in was the Sisi Museum. This museum is a little different in that it is dedicated to one person: Empress Elisabeth of Austria (affectionately known as Sisi). Sisi is one of those historical characters whose status and personal mythology has grown over time so that it is hard to know what is real and what is just exaggeration and stories. There have been numerous movies made about the life of Empress Elisabeth of Austria which has only added to the mythology and her pop-culture appeal. You may recognise Sisi from this painting:

The story that unfolded at the museum is that Sisi grew up free and happy in Bavaria as the fourth child of the Bavarian King. By all accounts she had a relatively peculiar childhood for a royal in that she was allowed to miss lessons to go riding and used to spend many hours alone walking or riding in the Bavarian countryside and forest. In a twist of fate that would change her life forever, Sisi caught the attention of the much older Crown Prince of Austria, Franz Joseph I, at age 16 and they were married soon after (in 1854).

After enjoying an informal and unstructured childhood, Elisabeth, who was shy and introverted by nature, and more so among the stifling formality of Habsburg court life, had difficulty adapting to the Hofburg and its rigid protocols and strict etiquette. In a story that is remarkably similar to that of the late Princess Di, Sisi then went on to develop numerous anxieties and psycho-somatic illnesses, brought on by the pressures of court life. She also developed a rigid exercise and dietary regime designed to keep her famously tiny waist to around 16 inches (that’s less than 50cm – insane!). Stories recorded from her ladies-in-waiting point to eating and purging behaviour that we would today diagnose as an eating disorder.

Apparently Emperor Franz Joseph was passionately in love with his wife, but she did not reciprocate his feelings fully and increasingly felt stifled by court etiquette. He was an unimaginative and sober man, whereas Elisabeth was imaginative, creative naturally introverted. Emotionally distant from her husband, it seems she fled him as well as her duties of life at court, avoiding them both as much as she could. She travelled extensively and sought solace in poetry, with some of her poems being on display at the museum. These poems, along with paintings and her personal belongings on display at the Sisi Museum, reveal an Empress who was really a bit of a non-conformist and a free spirit; a Queen who abhorred conventional court protocol and felt trapped in her opulent life. Tragically Sisi was murdered in 1898, at the age of 60. Well loved by the people of Austria and Hungary, she was greatly mourned and her somewhat enigmatic legacy continues to fascinate millions. 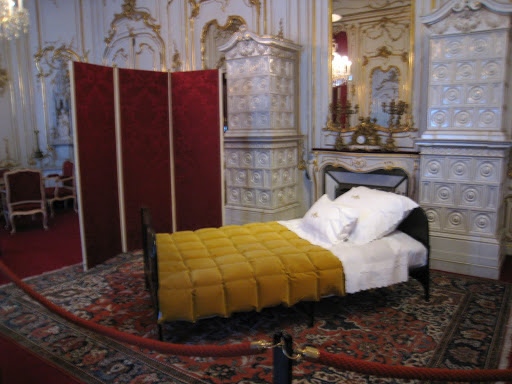 Sisi’s private bed chamber where some of her poetry is on display. 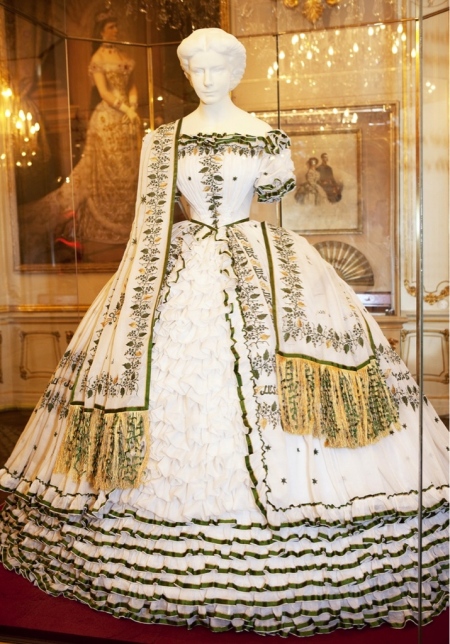 A replica of the dress Sisi wore to her engagement party at age 16.

Wow – what a day! Told you Vienna had a lot of history on offer! Our brains are definitely FULL today though so we’re off now for some dinner (maybe schnitzel again?!). Farewell until tomorrow!