We left the big city traffic and chaos of Budapest behind today and headed East, bound for one of Hungary’s prettiest best preserved Baroque town: Eger.

The beautiful town of Eger, Hungary.

Eger is a relatively small town (population about 55,000) in the Northern Uplands (Hungary’s version of highlands – there is no point in this country that stands above 1,000m so the Hungarians decided “uplands” was a more fitting term to describe the hills of this region). The town is about 150km from Budapest but a world away in terms of vibe. We’ve only been here a day and already we’re loving the more laid back feel of Eger compared to Budapest.

Hitching a ride on a Hungarian train from Budapest to Eger.

The picturesque town of Eger – worth the 3 hours trip from Budaspest!

It took us 3 hours to get here from Budapest this morning by train (it seems the Hungarian rail system is best described as punctual but very slow), with scenery gradually changing from urban sprawl to suburbia to farmland and villages. Many of the towns we passed were very rustic, to say the least. Certainly it was apparent that Hungary’s current economic hardships (the country was hit particularly hard by the recent GFC) are affecting some communities more than others. 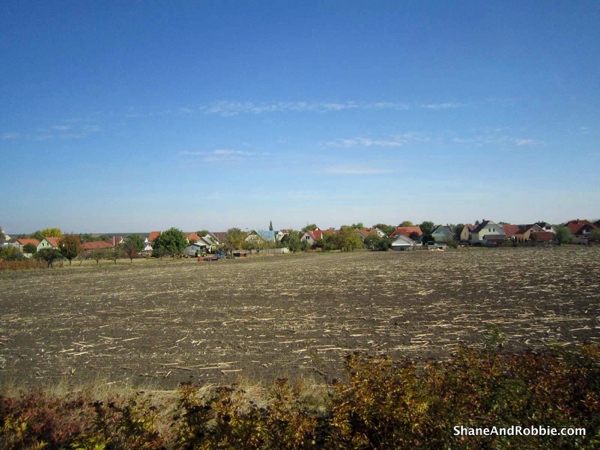 The villages out here have electricity and running water, but just barely!

We arrived in Eger, checked in to our accommodation for the night (a great little guesthouse about 10 minutes walk from the centre of town), and headed out for our orientation walk around the town with our tour group*. Eger is pretty small so the orientation walk didn’t take long and we were soon on our way exploring the town’s historical centre on our own.

*We met our new tour group today; the group is made up entirely of Aussies, all very well travelled individuals who are here to see something different and a bit “off the beaten track”. It’s great for us as many of our fellow travellers have been to places we haven’t and we can pick their brains for ideas on where to go, when to go, etc!

Our home for the night: the Atrium Guesthouse, Eger.

Our room is up on the top floor of the guesthouse and we have great views over the surrounding countryside from our balcony.

We learnt today that Eger was settled by the Hungarians in the 9th century and its castle and cathedral were built not long after, in the 11th century. The remnants of Eger’s castle are still on the hill and we had a great time exploring the walls and its inner courtyards.

Right this way to Eger Castle…

Eger Castle was originally built in the 11th century but fell into disrepair during the years of Turkish occupation. It was partially rebuilt in the 19th century but many of the older parts of the castle are little more than ruins.

Hmmm…, oh yes, I can see your problem – there are birds nesting in your cannon!

We had a great time exploring Eger Castle!

Eger grew up around its castle and soon became an important trade and religious centre. Then, in the 12th centuries settlers came from the areas beyond the Rhine and established vineyards in the region – a tradition that continues to this day, with the region producing some of Hungary’s most famous rich red wines*.

*Egri Bikavér (translation = Bull’s Blood of Eger) is the town’s most famous export. This full bodied red wine earned its name during the 16th century when the town was under siege by the Turks. When the Turkish soldiers saw the Hungarian soldiers, with their beards coloured red by the wine they had been quaffing, the story spread that the fierce Hungarians drank bull’s blood to fortify them before battle.

The hills around Eger have been covered in grape vines for centuries. The region’s best known produce are rich red wines known as Bull’s Blood.

This sculpture just outside the castle commemorates the acts of the brave citizens and soldiers who defended Eger against invading Turkish force sin the 16th century.

The town reached the peak of its development in the 14th and 15th centuries, though the Turkish occupation of Hungary in the 16th century put a halt to the town’s prosperity. One of Eger’s most epic moments in history was when a small group of citizens and soldiers, under the leadership of István Dobó, defended the fortress against a horde of invading Turks. They held off the invaders for months, and though the city was eventually conquered by the Turkish forces, the brave actions of those soldiers and of István Dobó became the stuff of legend and a great source of pride for all Hungarians. There is even a statue in Eger’s central square to commemorate their success.

The cute cobbled streets of Eger.

During the years of Turkish occupation churches were converted into mosques, the castle rebuilt, and other structures erected, including public baths and minarets. Then, when Hungary was liberated, the Turkish-built structures were torn down and churches rebuilt – including the beautiful Eger Cathedral and the Baroque Church of St Anthony. 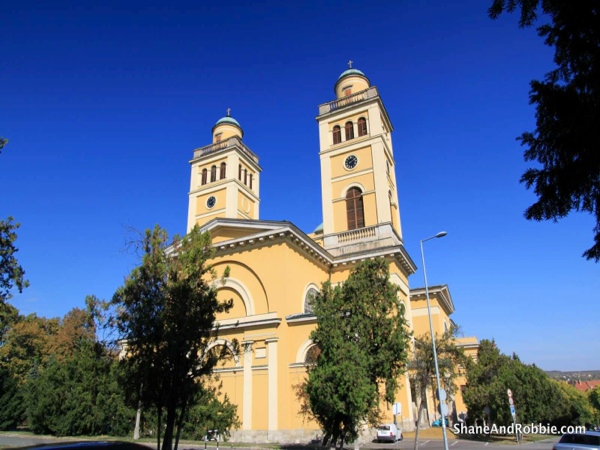 Eger Cathedral from the inside. 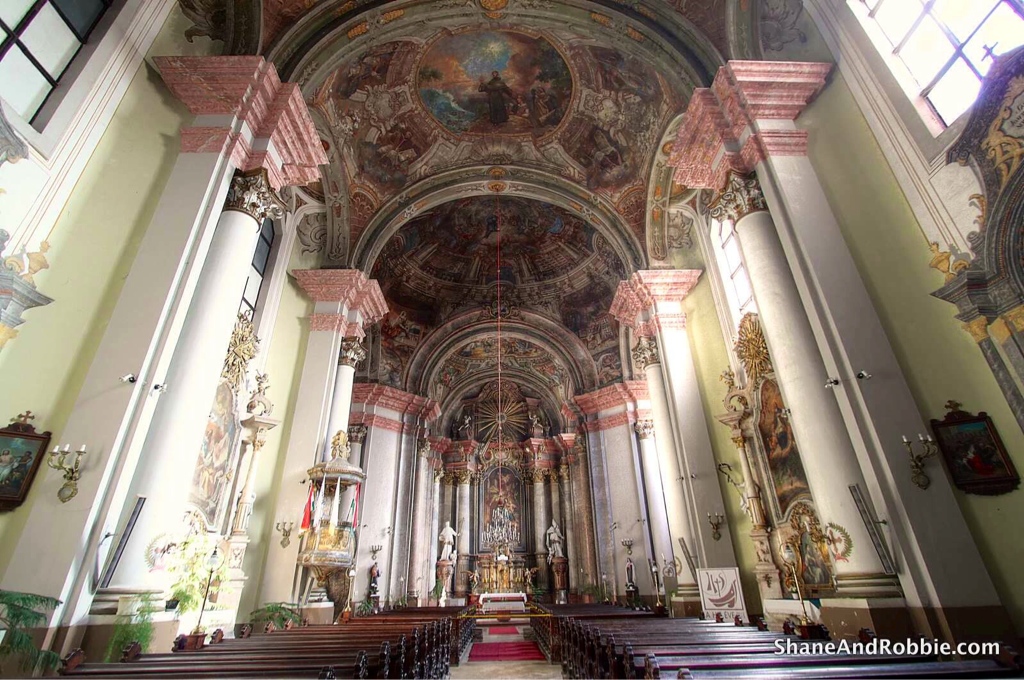 The interior of Eger’s Baroque Church of St Anthony was especially beautiful, with its many frescos and marble detailing.

A single Turkish minaret, still visible today, was left standing. The minaret stands all by itself on the fringes of town, a rather odd testament to the town’s years under the Turks.

After the Turks were defeated and Eger once again became a Christian town all the mosques were destroyed. This single minaret is all that remains of the Turkish architecture that was once here.

We had a great afternoon exploring the town and the castle over-looking it. This is a very picturesque town that is small enough to see entirely on foot. It’s such a pity we’re leaving tomorrow! That seems to be the compromise with seeing places as part of a tour: we get to see more of the smaller, out-of-the-way places we would not have been able to see on our own (which is awesome), but we have to do it at someone else’s pace (not so cool). For now the compromise seems with it though as we would have been a little nervous travelling through Romania and Bulgaria entirely on our own. We have one more day in Hungary though, with tomorrow’s stop being Debrecen – Hungary’s second-largest city and the “Capital of the Plains”.  Farewell ’til then blog fans! 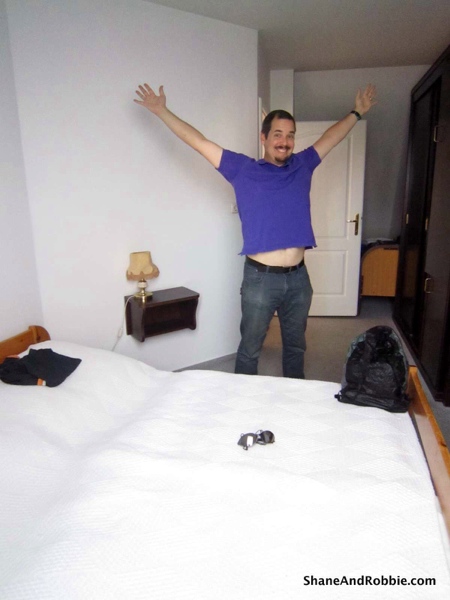 Getting excited about moving on to Romania and Bulgaria next!