As you may have deduced, Bucharest did not make a great first impression on us yesterday. We had a mornng in town today and decided to spend our last few hours in Romania looking for Bucharest’s hidden treasures with a local guide. Through our tour leader we found Mihail, a young, university-educated, multi-lingual professional who works full-time and moonlights as a tour guide.

The Romanian National Opera House – one of Bucharest’s hidden treasures.

With Mihail we saw a bit more of the city’s historical centre, Lipscani. During the Middle Ages and then again during the Romanian Renaissance (i.e. 19th century, after Romania was liberated from ottoman rule), this was the commercial heart of Bucharest (which at that time lay along the major trading route between Istanbul and Northern Europe). Merchants and craftsmen from all over the then known world established their stores in this section of the city creating a unique blend of cultures and architectural styles. The area became known as Lipscani, named for the many German traders from Lipsca (Leiptzig in German).

One of Lipscani’s beautiful old buildings, Today it’s a bank. 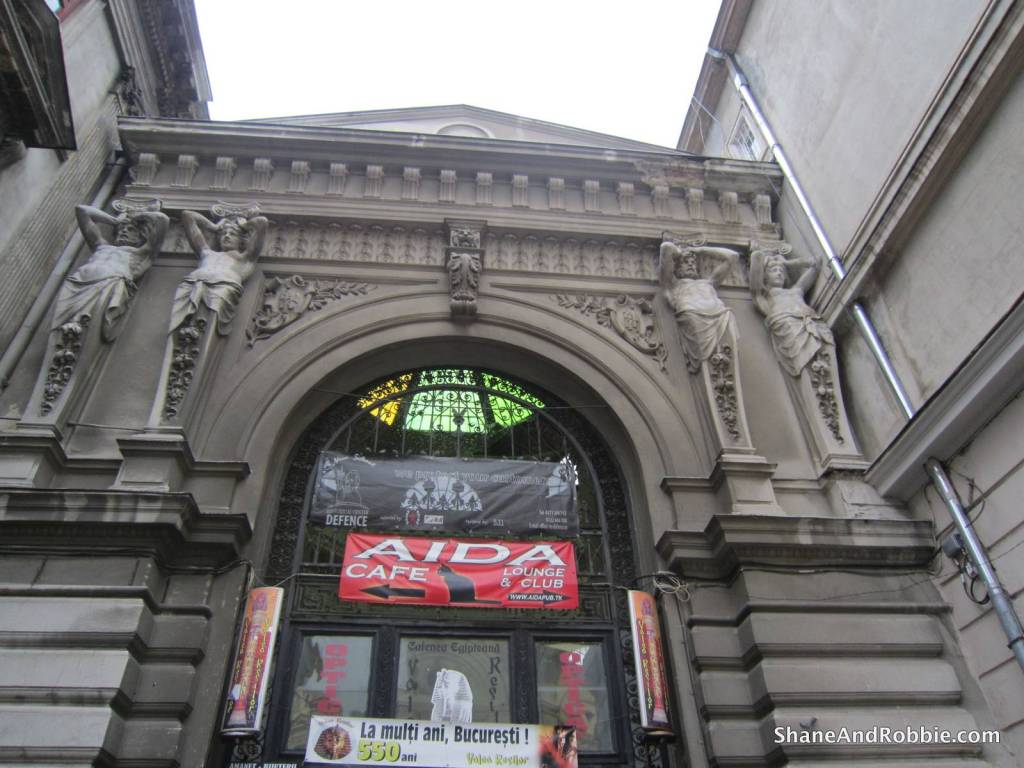 Another of Lipscani’s renovated 19th century palazzos. This is now a shopping mall.

During the years of Communist rule Lipscani was let go to ruin, with many of the 19th century palazzos left derelict. As recently as 2010 much of Lipscani was in ruin, with squatters occupying many buildings and streets left in disrepair. Then, after Romanian joined the EU, foriegn investors bought many of the buildings, renovated them and Lipscani today is as fashionable as it was 150 years ago. There are restaurants, cafes and bars aplenty and we could see, as we walked through, that even the buildings that haven’t been restored yet were under renovation. As Mihail said, there is a lot of energy and momentum gathering in Bucharest, with many people hoping for a much brighter future*.

*Interestingly the main obstacle towards more rapid and efficient progress in Romania, according to tour guide, is rampant corruption. For example, when the EU gave Romania a few billion Euro in 2011 to improve their sewerage systems and drainage infrastructure, the Minister responsible pocketed most of the money and promptly disappeared! And when funds were given to Bucharest to help implement a city-wide garbage-collection service, the owner of the company that won the tender (a friend of the President’s by the way) suddenly got a new Ferrari. It’s a state of affairs seen all over the world, but one that young Romanians like Mihail want to see changed. It certainly seems like there is still a way to go though. 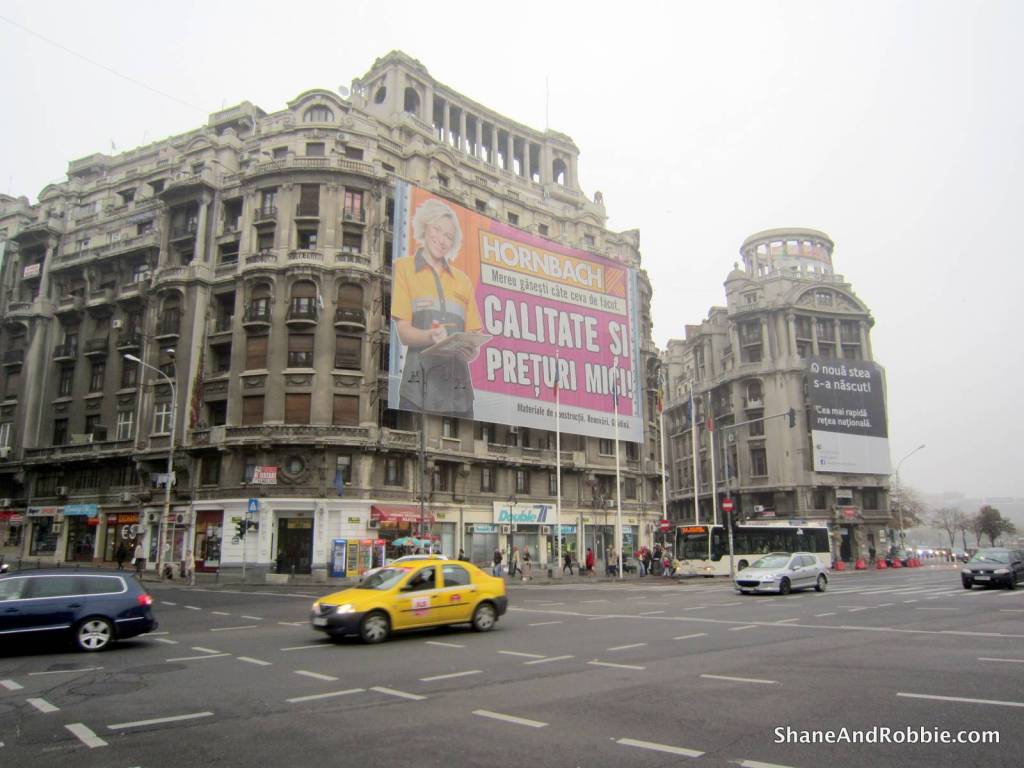 Bucharest is really a place in transition:moving from Communism to capitalism; from old to new; from corrupt and slow to efficient and effective – hopefully.

One of the most visited buildings in Lipscani is Manuc’s Inn – the oldest standing building in Bucharest. Built in 1808 by the wealthy Armenian trader Manuc Bey the inn was bought in 2010 by a wealthy American and restored to its former glory. Today it is once again a restaurant.

At the centre of the historic area are the remains of the Curtea Veche (translation = Old Princely Court), once the home of Wallachia’s (and then Romania’s) ruling Princes. Built in the 15th century by Vlad Tepes (i.e. Vlad Dracula), the Curtea Veche is today just a set of ruins. 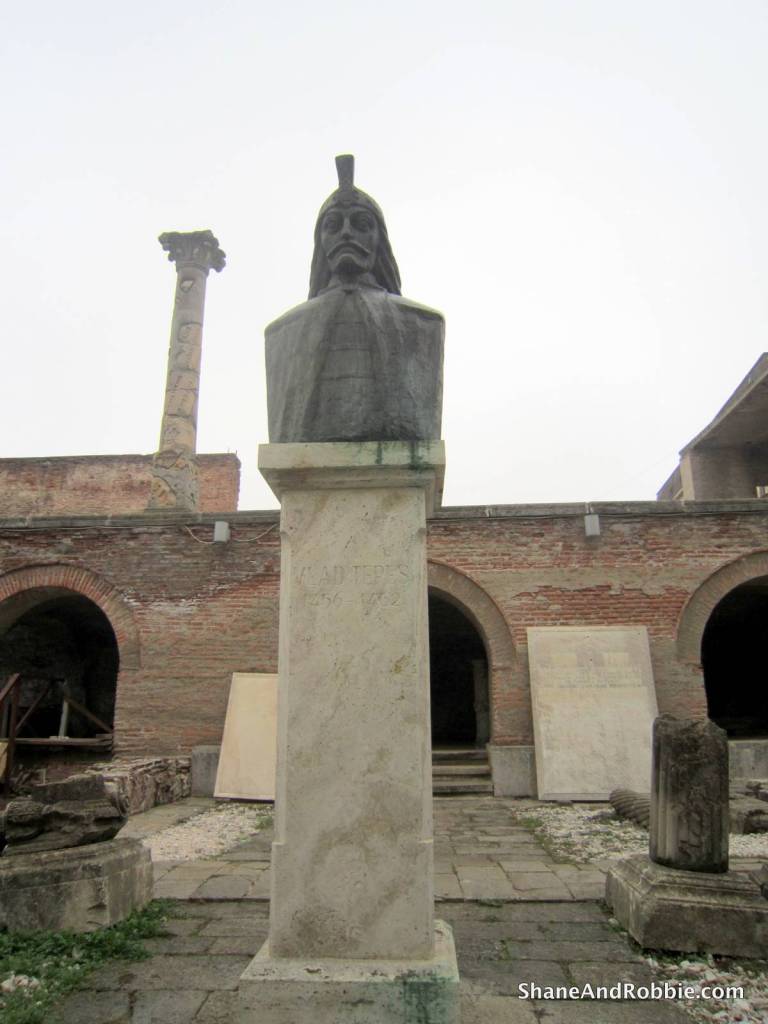 The ruins of the Curtea Veche, with a bust of Vlad the Impaler in front.

Near the Curtea Veche, tucked down an alley, we saw the Mănăstirea Stavropoleos (translation = Stavropoleos Monastery). Built in 1724 this Eastern Orthodox monastery is one of Bucharest’s last surviving historical churches. Many of the city’s churches were destroyed during WWII and not rebuilt the athiest Communists.

The inner courtyard of the monastery shows the blend of Eastern and Western architecture common here in Romania.

The Mănăstirea Stavropoleos is definitely one of Bucharest’s hidden treasures.

It was interesting to hear, however, that a few churches did survive during Nicolae Ceaușescu’s reign. For example, when an entire suburb in Bucharest was razed to the ground in the late 1970s to make way for the Palace of Parliament, a number of churches were moved rather than destroyed. The churches were literally picked up off their foundations and moved. Mihail had some old black and white photos form the era that he showed us and it was amazing to see whole buidlings being transported on the back of trains*.

*Mihail had some other fascinating stories to share with us about life under the Communist regime as his grandparents and parents had been living in the suburb that was destroyed to make way for the mammoth Parliament. For example, he told us how his family were forced to leave their homes in the late 1970s and were moved into one Communist-built apartment blocks nearby, where the kitchen and bathroom were shared between multiple apartments on the same floor. Scary stuff! 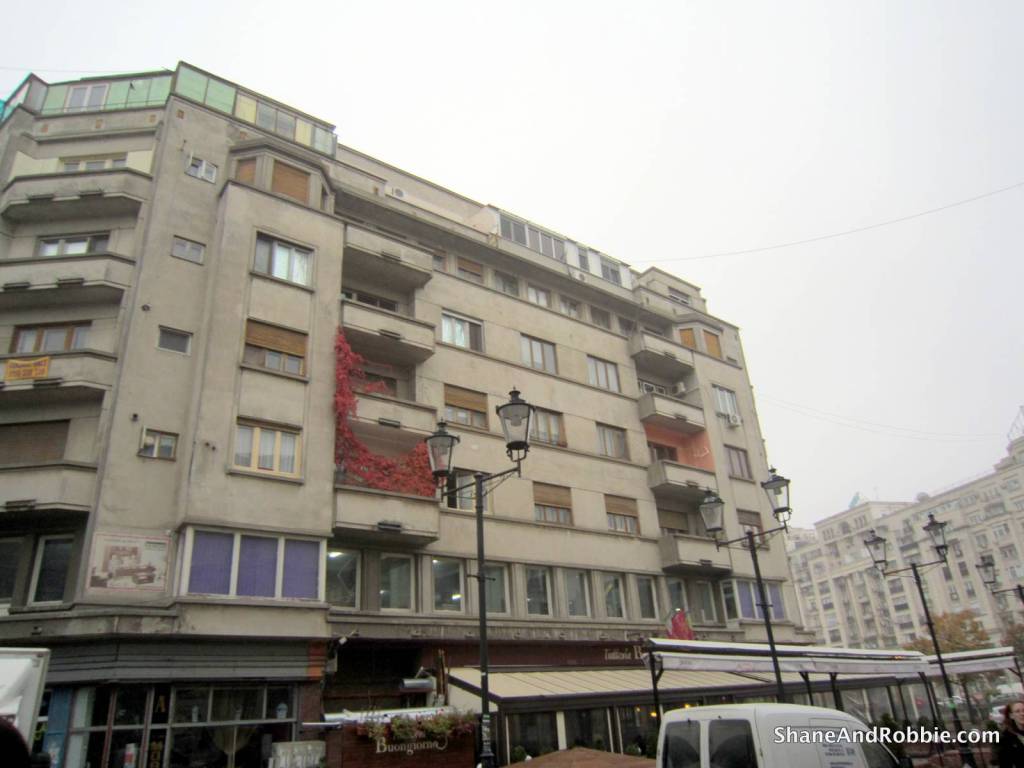 When they cleared away houses to make way for the Palace of Parliament they moved people out of their houses into apartment blocks like this, where kitchens and bathrooms were shared between 4-6 families.

Many of the churches were moved behind other buildings to hide them from sight (the idea being that if the churches were hidden, people would forget about religion). Mihail actually took us through the back of one of these Communist-era apartment buildings, through an alley that we would never have found on our own, into a clearing behind the huge apartment buidlings. In this hidden clearing there was a tiny church. One of the oldest churches in Bucharest (with parts dating back to the 16th century and a steeple built in 1715), the Apostles’ Church was lovely.

The Apostles’ Church was moved to make way for the Palace of Parliament and hidden behind these apartment buildings. 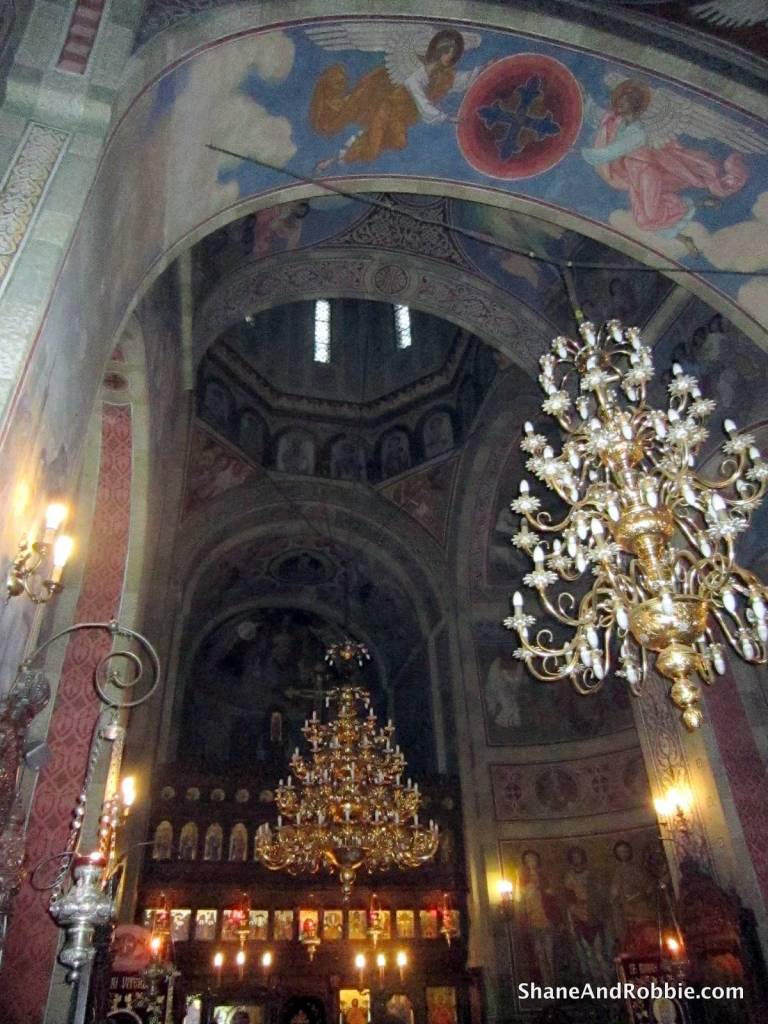 The beautiful interior of the Apostles’ Church

Our final stop on the walking tour of Budapest with Mihail was the Romanian National Museum. We did not enter the museum but stopped on its front steps to admire the bronze statue there. The statue shows a man of Roman visage holding a wolf; the wolf was the animal most revered by the first Romanians – the Dacians. The statue is designed to represent the heritage Romanian’s are so proud of: a mix of Dacian and Roman. Unfortunately it is one of the ugliest statues ever. Even the Romanians agree with an enterprising Bucharestian starting up a Facebook page dedicated to the statue’s ugliness! The monument has even been described in the Romanian media as “a monument to Romania’s stray dogs”.

Our guide Mihail and the ugliest statue in Bucharest.

Mihail certainly succeeded in showing us some of Bucharest’s hidden treasures and he’s helped improve our impression of the city somewhat, but only somewhat! It might be interesting to return to Bucharest in 10 or 20 years’ time, once things have been cleaned up a bit, the construction work has finished and the corruption has been addressed. Certainly it was heartening to meet a local Bucharestian who is so enthusiatic about his city and has so much hope for the future of Romania.

Bucharest is built along the banks of the Dâmbovița River and iis named after a sheppard named Bucha who settled the city. The name Bucha means joy in Romanian. Hopefully the city will become more joyful over the next few years.

We left Mihail and his fight for a better Bucharest after lunch and caught a train to Bulgaria. It took us almost 7 hours to travel 220km on what has to be one of the world’s oldest and slowest (but still functional!) diesel engine trains. The journey was pretty uneventful, though it was interesting to pass through the Romanian oil fields* and see how flat and featureless the plains in the very South of the country are.

“What do you mean Bulgaria is even poorer than Romania?!” says Shane. “Why are we going to Bulgaria then?!” 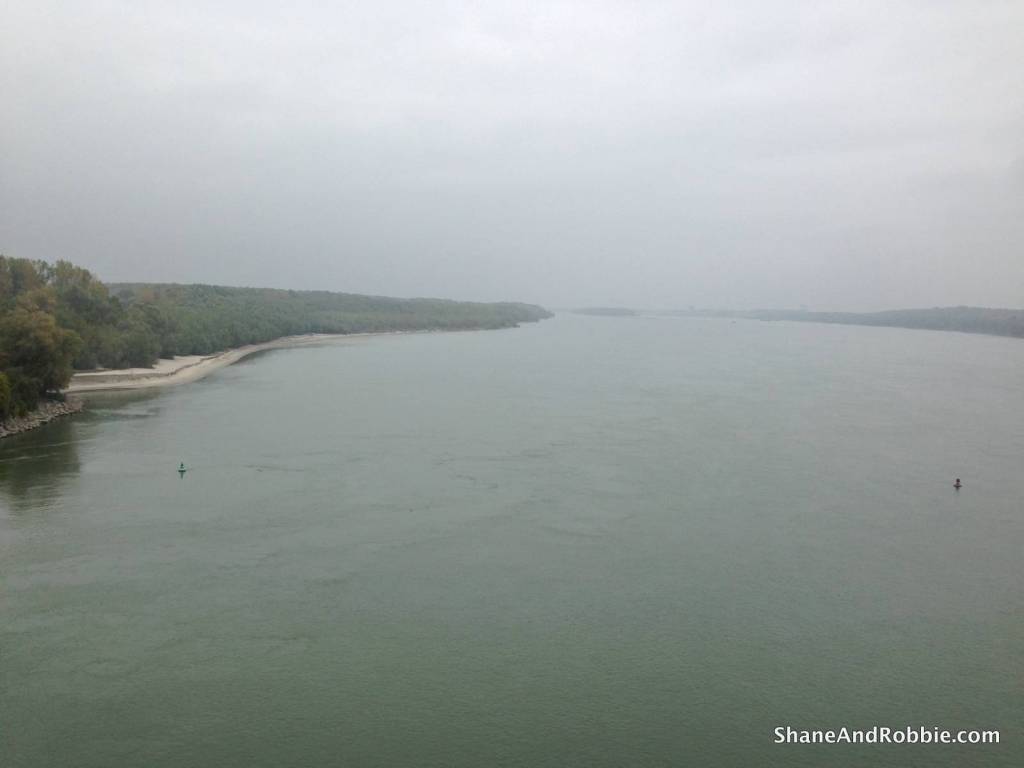 Crossing the Danube River – the border between Romania and Bulgaria.

We crossed the Danube, the natural border between Romania and Bulgaria, at about 5:00pm. As soon as we were across the river, we knew we were somewhere completely different as all the writing here in Bulgaria is in Cyrillic! We learnt the basics of reading and writing Cyrillic before we went to Russia in July but it’s been months since we had to use it so first thing on the agenda for tomorrow is to brush up on our alphabet skills. It’s terrible not being able to read! For now though we’re off to bed – it’s been a long day and we need all the sleep we can get because tomorrow we have a whole new city to explore: Veliko Tărnovo, Bulgaria!