Wow – what a welcome to Turkey! We decided to tackle our first full (awake) day in Turkey by immersing ourselves fully in the chaos, colour, smells, sights and sounds of the world’s oldest and largest “shopping centre”: Istanbul’s Kapalıçarşı (translation = Grand Bazaar). It was busy, it was noisy and it was AWESOME!

After our “day off” yesterday, we awoke this morning feeling refreshed and keen to explore this immense city. Our hotel is 5 minutes from a Metro station, so after a hearty breakfast we headed off for our first Istanbulian adevnture. Given how huge and chaotic this city is, we were preparing ourselves psychologically for a pretty “gritty” and intense subway experience. Much to our (pleasant) surprise, however, the subway here is very modern, incredibly clean, fast and efficient*. It was also pretty empty at 10:00am, making for an easy run into Sultanahmet – Istanbul’s historical centre.

*We found out that the public transport system in Istanbul has been undergoing a massive overhaul over the past 10 years, with 4 lines and 40 new stations being built since 2004. A further 3 lines and 24 stations are under construction. The country’s ageing inter-city railway system is also currently getting an overhaul (hence we had to catch a bus from Bulgaria). There are also a plethora of cranes across the skyline and loads of new highrises going up in the new part of town and central  business district. Everywhere we look there are signs of progress, development and expansion – seems Istanbul is definitely on the up-and-up! 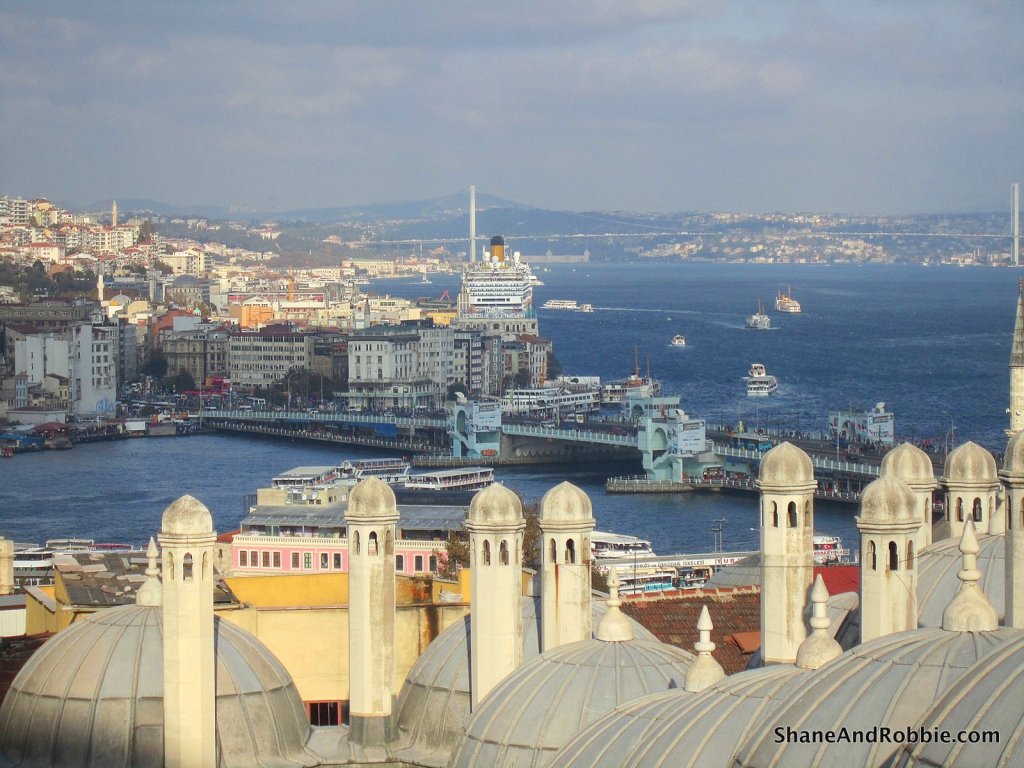 Busy, bustling and the on the up: Istanbul.

Sultanahmet is the heart of ancient Byzantium; according to legend, this is where, in 660BC, Byzas, a Greek prince, founded a new imperial city after consulting the oracle of Apollo at Delphi. Named after its founder, Byzantium was perfectly positioned to take full advantage of trade that passed through the Bosphorous, between the Black Sea and the Mediterranean; it was also a key stop along the Silk Route and was a highly defensible city, surrounded on 3 sides by water. Given these advantages, it’s no surprise that over the next 1,000 years, Byzantium flourished. Then, in 330AD the city became the new capital of the Roman Empire and was renamed Constantinople (after the Emperor Constantine). As the Western Roman Empire crumbled and fell, Constantinople and the Eastern Roman Empire (i.e. the Byzantine Empire) prospered. The city’s ancient history is evidenced even today by Roman and Byzantine ruins; walking around Sultanahmet today it was fascinating to see ancient Roman ruins juxtaposed against the traffic and cityscape of modern Istanbul.

One of the many ancient Roman and Byzantine ruins peppered throughout Sultanahmet.

For the next 1,000 years or so Constantinople was one of the wealthiest and most important cities in Europe, the heart of the Orthodox Christian empire and the target of frequent attacks by Persians, Bulgars, Slavs and Arab invaders.  Finally, in 1453, the city was taken by the Turkish Ottoman Empire and renamed Istanbul. Following the conquest of Constantinople, Sultan Mehmed II immediately set out to revitalise the city, creating a cosmopolitan centre that persisted remained the capital of the Ottoman Empire for almost 500 years. Under Mehmed II’s rule the city’s infrastructure, damaged by years of attacks, was rebuilt; Topkapi Palace, the sultan’s official residence, was built during these years, as was the famous Kapalıçarşı.

Istanbul’s famous Grand Bazaar was built in the 15th century and is still the largest under cover shopping “mall” in the world. 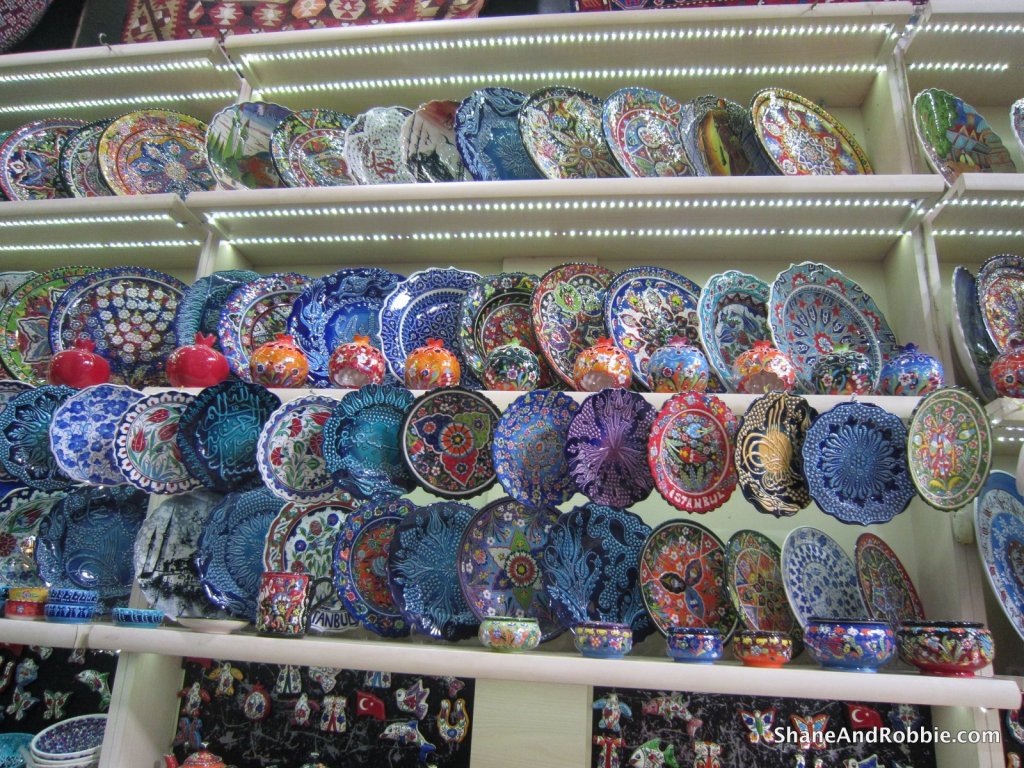 Love the colours of Turkish pottery!

Istanbul’s Grand Bazaar includes 60 covered alleys, lined with 3,000 stalls and cupboard-sized shops that sell everything from the highest quality Turkish carpets to mountains of Turkish Delight, baclava and halva. We had every intention of having a quick wander through the bazaar and then moving on to other sights, but the sheer size of the place had us wonderfully lost for hours. 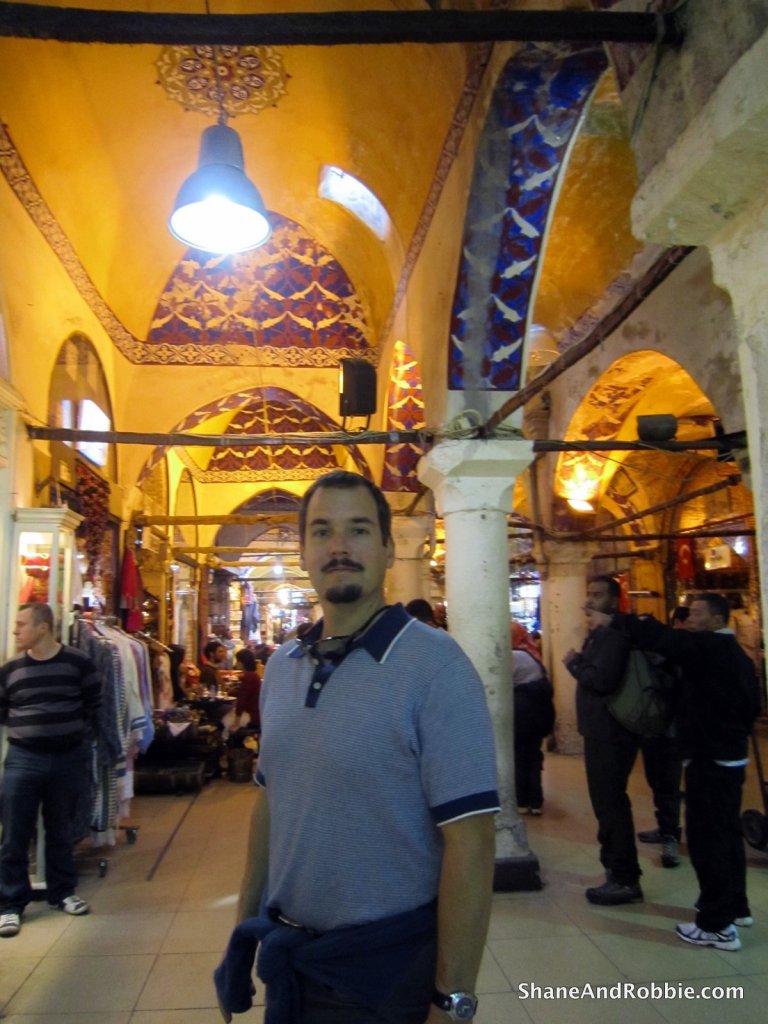 Happy to get lost in the Grand Bazaar….

The “lighting” section of the grand bazaar. Unfortunately we don’t really have room for a Turkish chandelier in our suitcases….

Historically the Grand Bazaar was considered to be the most important trade hub of the whole Mediterranean region, with goods from the every corner of the then known world available for sale. For centuries now the bazaar has been divided into sections, with shops selling similar items all clumped together. We had no intention of buying a chandelier or a dinner set of Turkish pottery, but it was still great fun checking them all out. All the tourists, touters and colourful wares on display created a cacophony of sound and a visual feast that was incredibly entertaining. 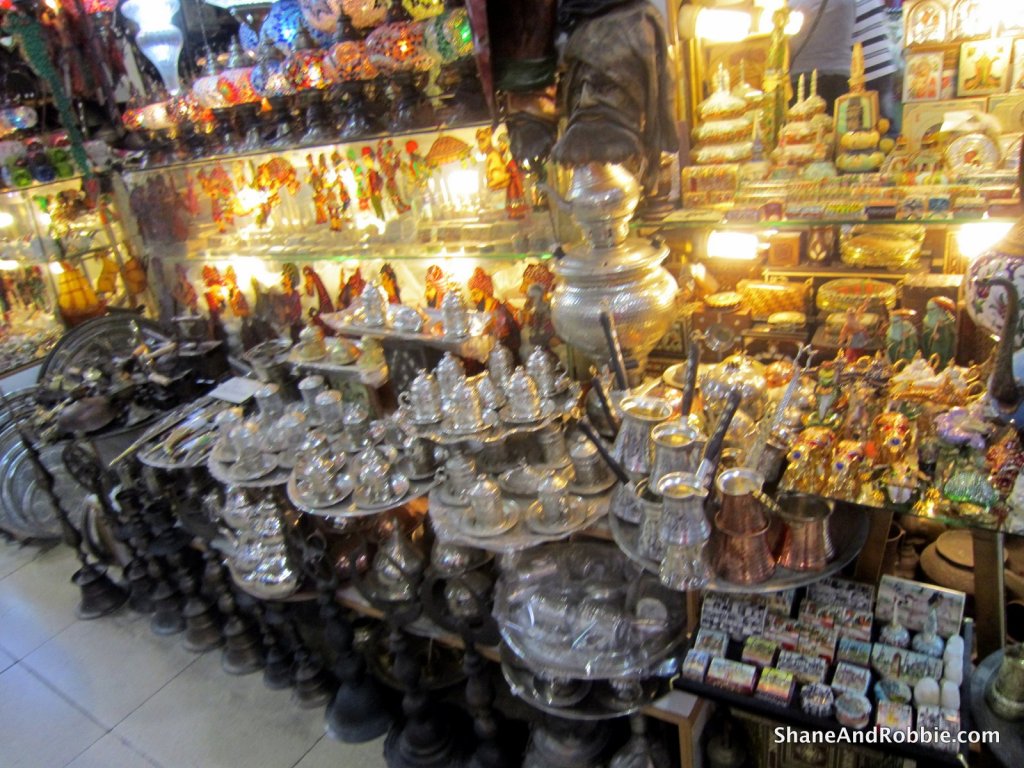 Half way through our shopping expedition we stopped for a cup of that black syrup the locals call “coffee” and a quick bite to eat, and then continued on. We even ventured INTO some of the shops and walked away with a few key purchases: I bought a scarf (essential head covering for entering mosques) for a mere 3 Turkish Lira (about $1.50AUD), a new pair of trousers to replace my well worn jeans and a couple of light cotton tops with long sleeves made in the traditional style (again, very useful for modesty in Muslim countries without being too warm). Shane found a couple of men’s cotton shirts he loved so we added those to our haul. Goodness knows how we’re going to fit all these new things into our backpacks, but boy was it fun trying stuff on and haggling* over the price of our purchases!

*Turkey, like many Islamic countries, has a long-held tradition of haggling. We were advised by the locals to offer half whatever they first suggest the price is and go from there, though the Grand Bazaar is so touristy that prices there were sometimes 400% what we saw in local shops just s few streets away from the bazaar. 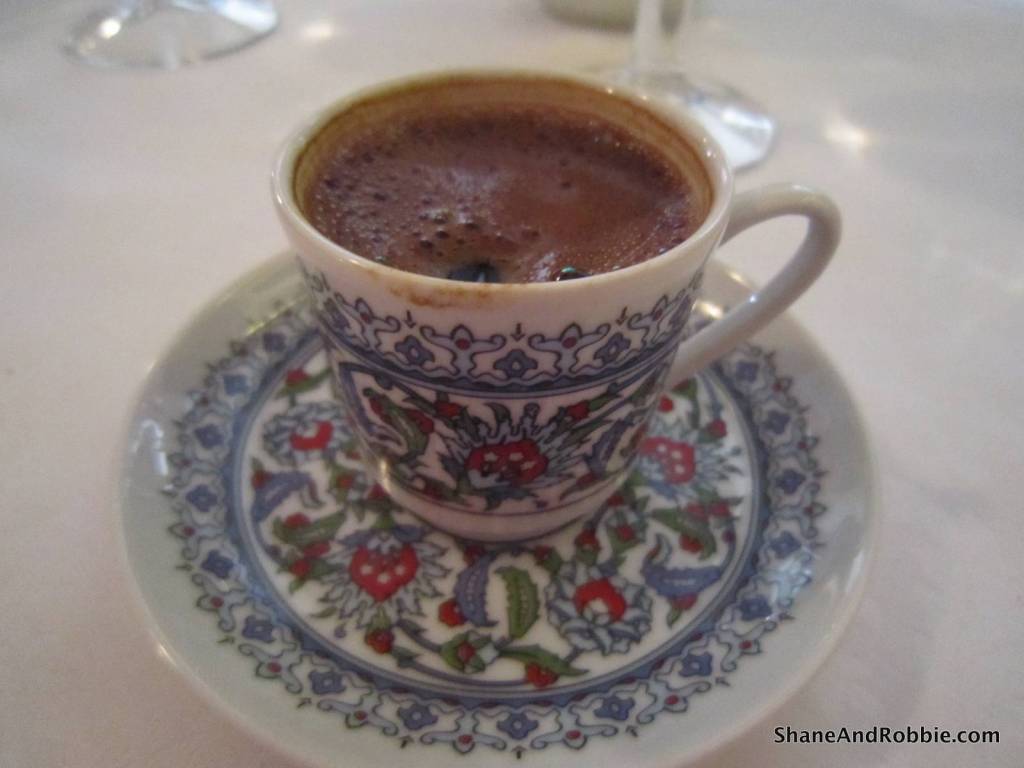 Turkish coffee is more like caffeinated tar. Served black and sweet, it sure packs a punch!

On our way home we decided to visit at least one historical sight: the Süleymaniye Camii (translation: Süleymaniye Mosque) Built in 1558 atop one of the city’s many hills, this is the largest mosque in Istanbul. The mosque itself was lovely, though the views it afforded were even more captivating for us. 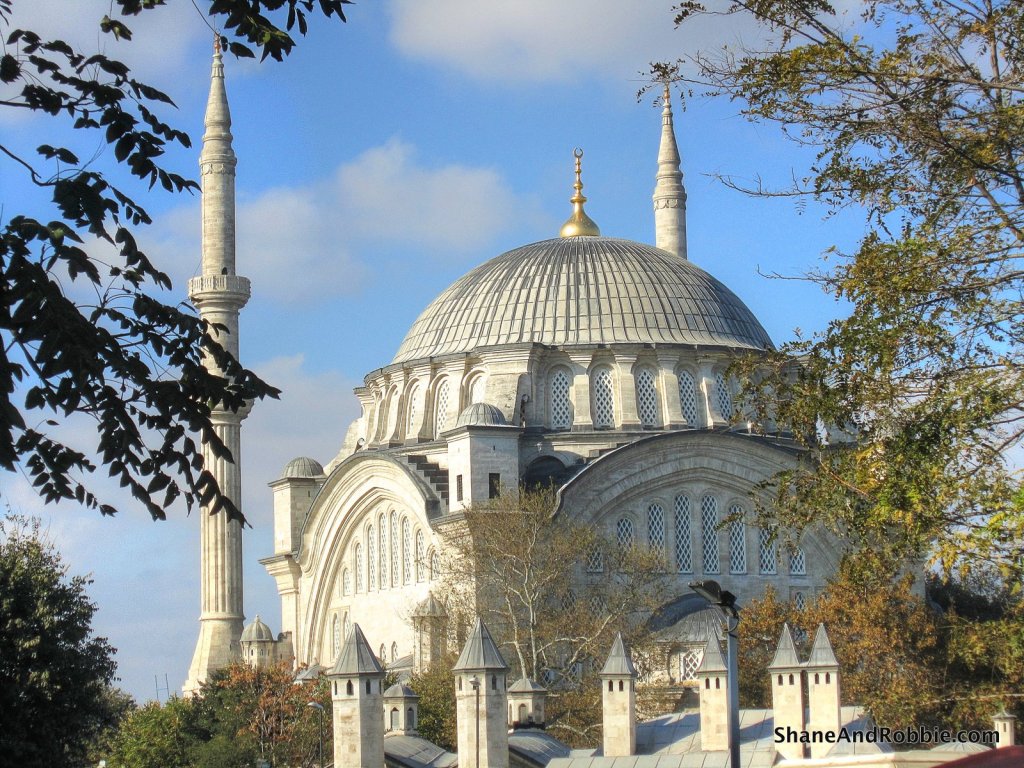 Süleymaniye Mosque is the largest in Istanbul.

We arrived at the mosque just in time for afternoon prayers and so couldn’t go in. The exterior was still lovely though. 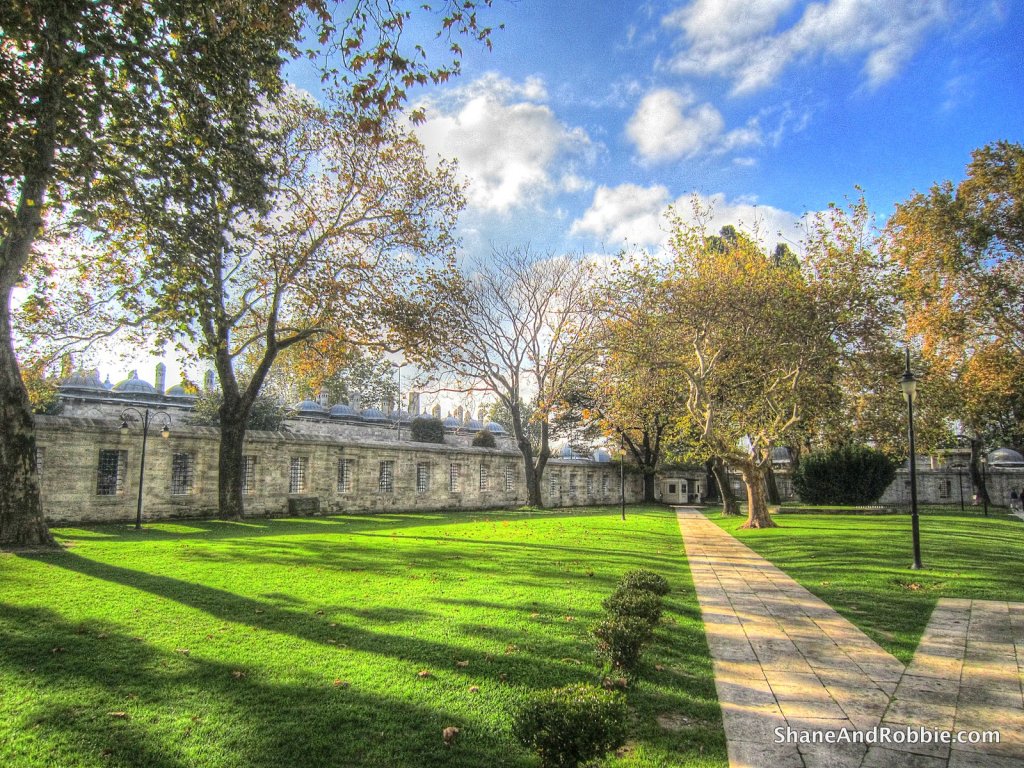 Built in 1558 the mosque sits on top the tallest hill in Sultanahmet, providing great views over the old town.

By this stage it was about 5:00pm and fearing a return by Metro during peak hour, we decided to stay in Sultanahmet to watch the sunset and enjoy dinner in one of the restaurants lining the Galata Köprüsü (translation = Galata Bridge). Spanning the Golden Horn, the Galata Bridge is one of Istanbul’s iconic structures – this is where people go to meet, to fish and to watch the sunset over Sultanahmet. Galata Bridge is a local institution: the current bridge was built in 1944, but there has been a bridge in that location for almost 1,500 years. We joined the throng to enjoy sunset over one of the world’s greatest cities, and then had a great meal of grilled meats, dips and Turkish breads on the bridge. 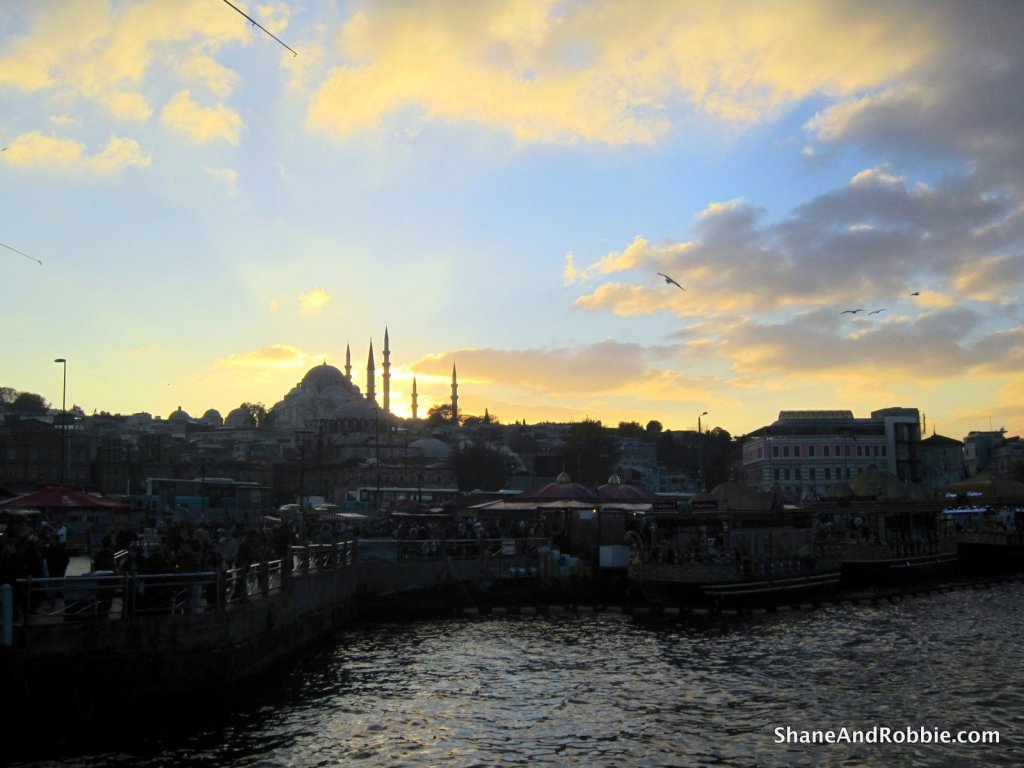 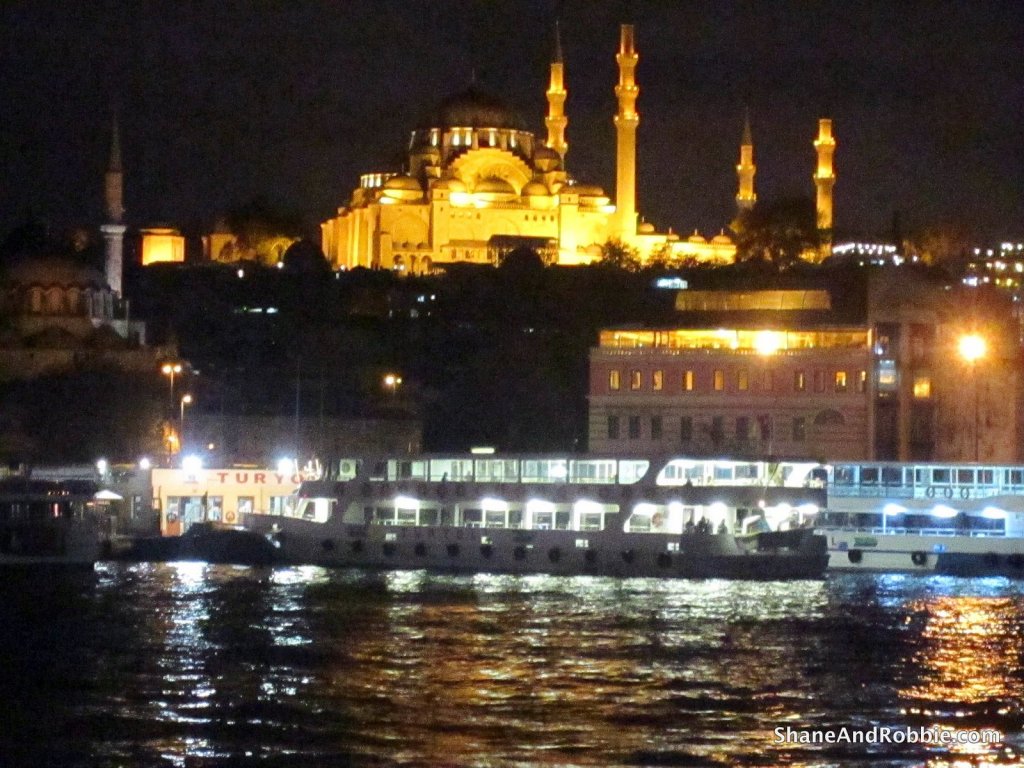 Views back over to the old town from our dinner stop on Galata Bridge.

By the time we were ready to go back to our hotel it was well after dark and we were way to lazy to trek back to the Metro station so we jumped in a cab and watched the city lights fly past at about 150km/hour (it seems it is illegal to drive slowly in Istanbul). This city is mad – it is just SOOOOOOO big, busy, noisy, crowded and chaotic. It is also mesmerising, with all its history and unique cultural blend of East and West. So far we’re feeling completely overwhelmed, but are just loving Turkey! 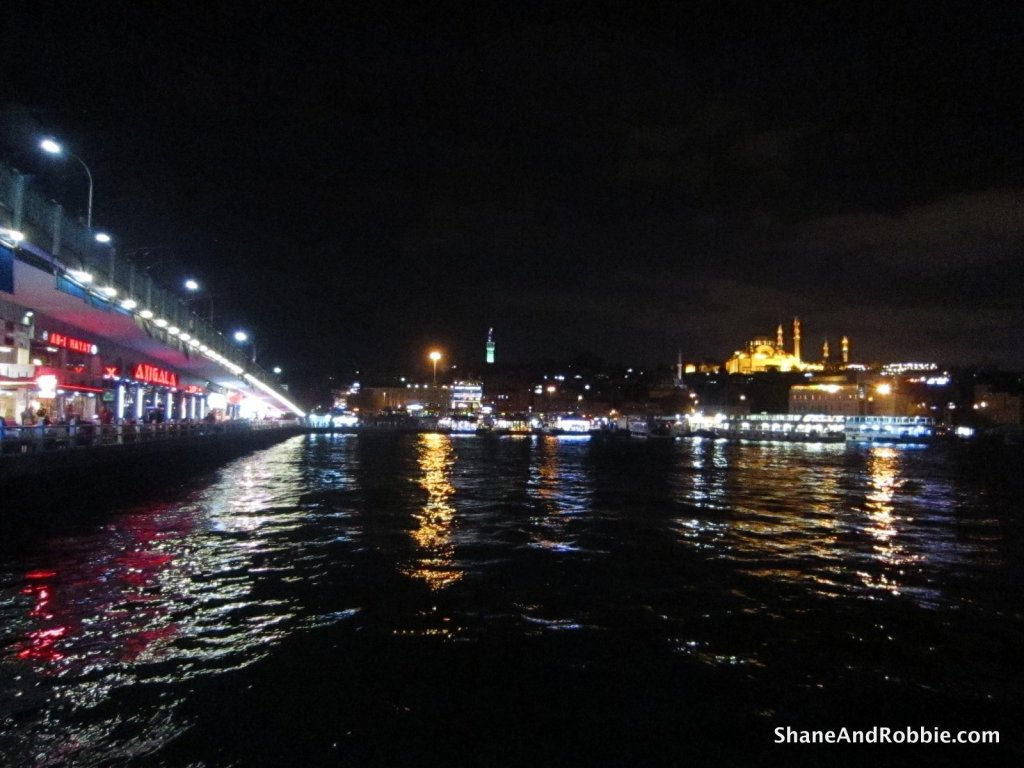 Saying one final farewell fro the old town and Galata Bridge as we head home after a great day’s shopping and sightseeing.