Riding a hot air balloon over the Goreme Valley

We went hot air ballooning this morning over the Goreme Valley here in Cappadocia and it was AWESOME! Sailing through the air with 40 other balloons, we got to see the whole valley from a completely different perspective. As the sun broke through the early morning clouds, the amazing rock formations of Cappadocia were painted yellow, pink and white. It was stunning and well worth the early morning start. 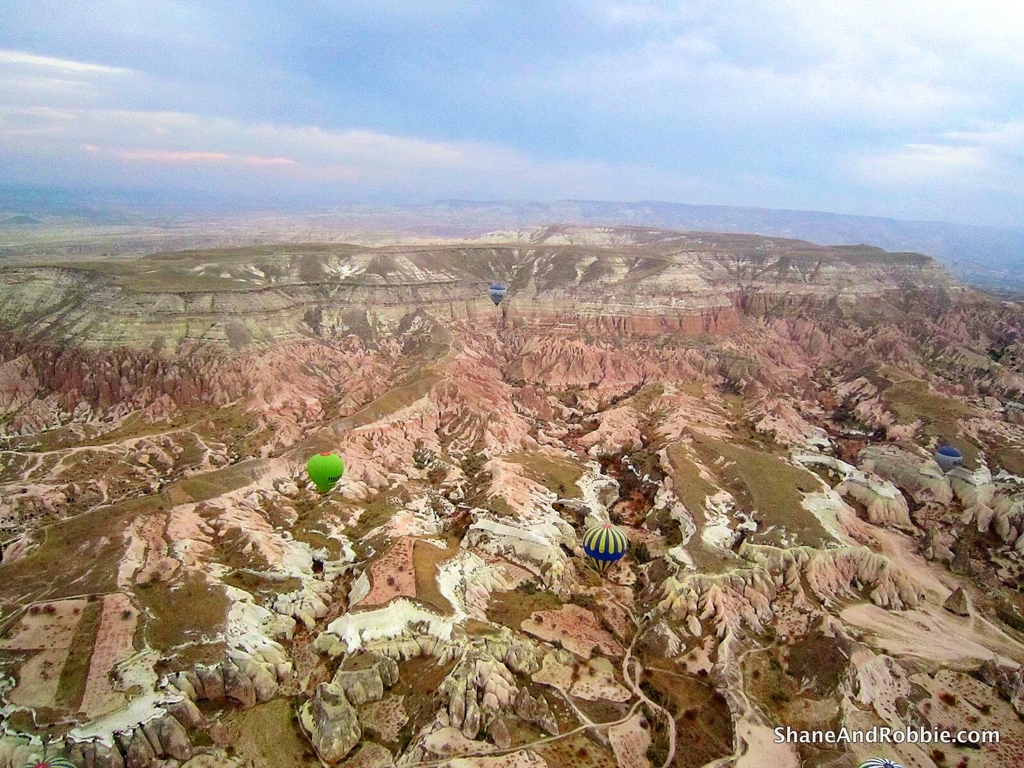 Hot air ballooning over Cappadoccia – a stunning way to start the day!

Our day started at the ungodly hour of 4:30am when our alarm went off. Barely 30 minutes later, bleary eyed and barely cognisant, we shuffled onto the mini-bus that was sent to pick us up form our hotel and take us out to the hot air balloon “lift off zone”. From our perspective the “lift off zone” looked a lot like a large, dusty, deserted field – quite under-whelming really. Within a few minutes, however, we had hot cups of coffee pressed into our hands and hot air balloons (with baskets) were being delivered left, right and centre. As the balloons were inflated the field quickly transformed into a noisey, colourful fairground with hundreds of excited, eager tourists like us milling around, waiting to jump on board. After an incredibly smooth take off we were up and floating above Cappadocia. The views were amazing, and the flotilla of hot air balloons around us just added to the spectacle. It was a wonderful way to start the day and a great way to see a bit more of the Goreme Valley! Here are just a few of our favourite photos from this morning… 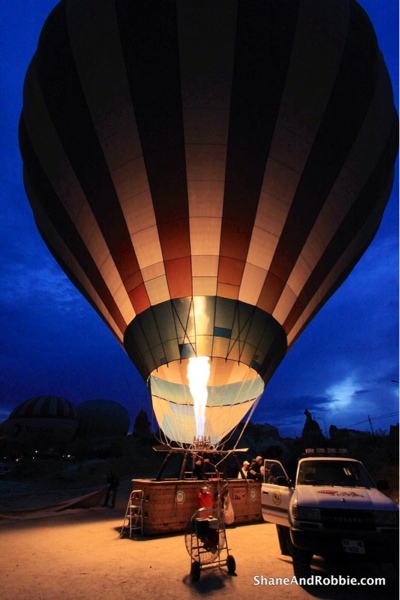 Taking off in the pre-dawn darkness.

Bleary eyed and barely awake at 5:00am this morning.

We had a very smooth take off and were soon high above Cappadocia. 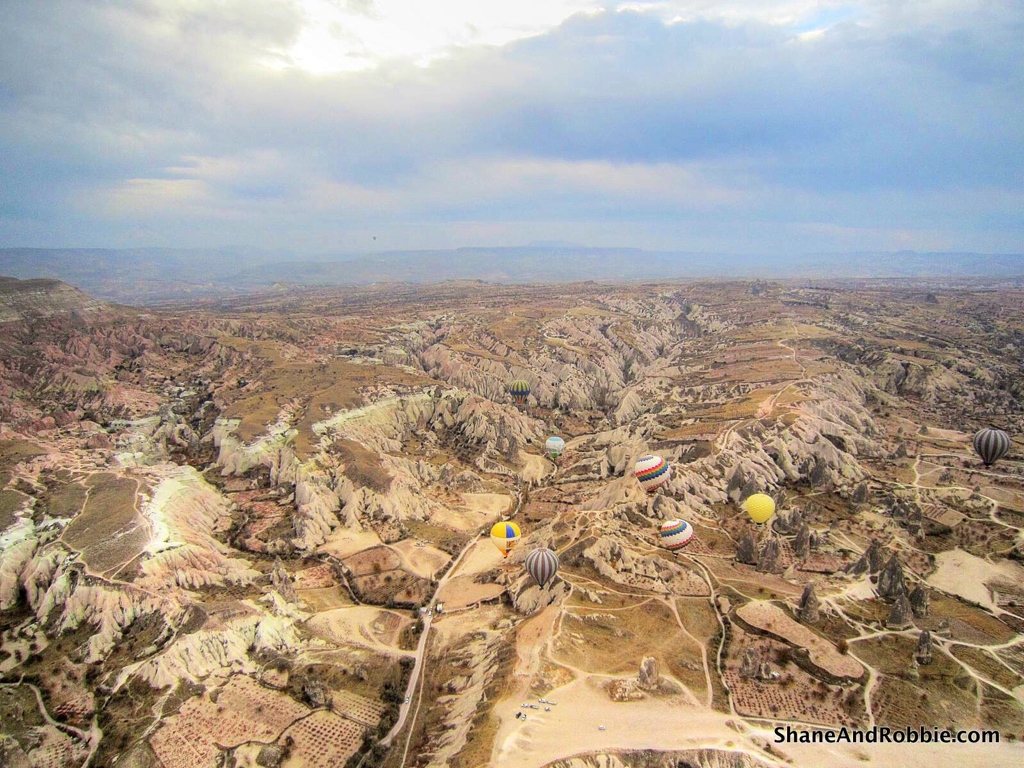 We went as high as 800m above the ground and as low as 5m off the ground. Very cool! 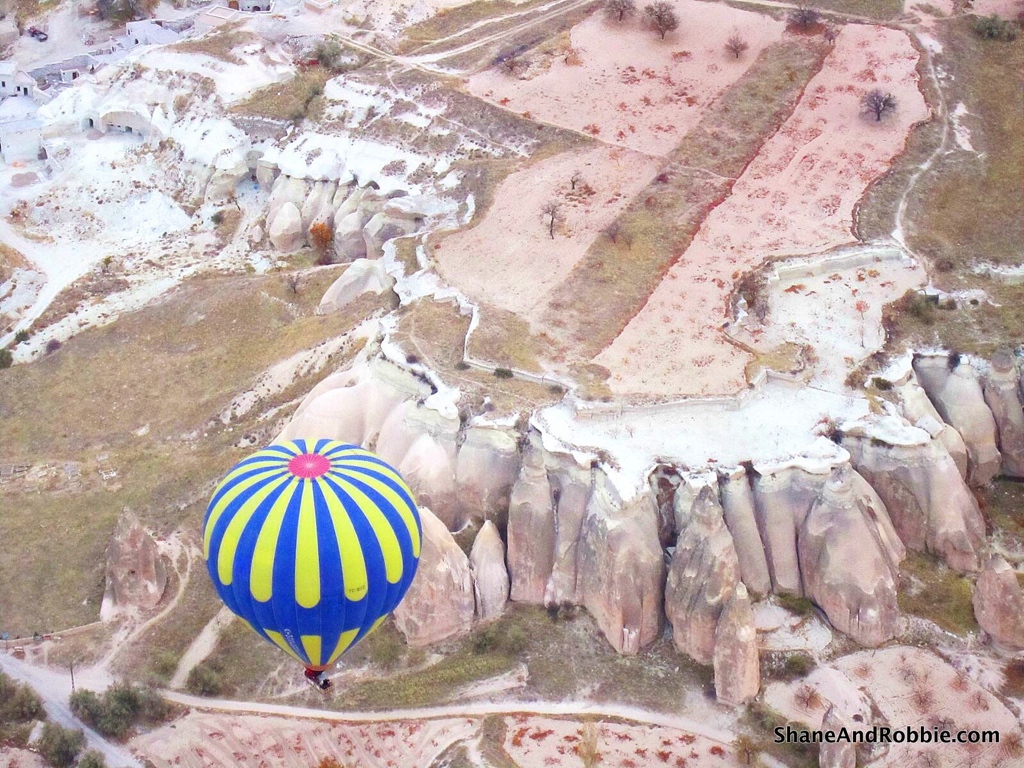 We could see so much detail from the balloon – it really brought the landscape to life.

There were about 40 balloons up in the air this morning – some days they have over 150 up there!

Floating over Ugrup, the biggest town in the Goreme Valley and the location of our hotel (its down there somewhere). 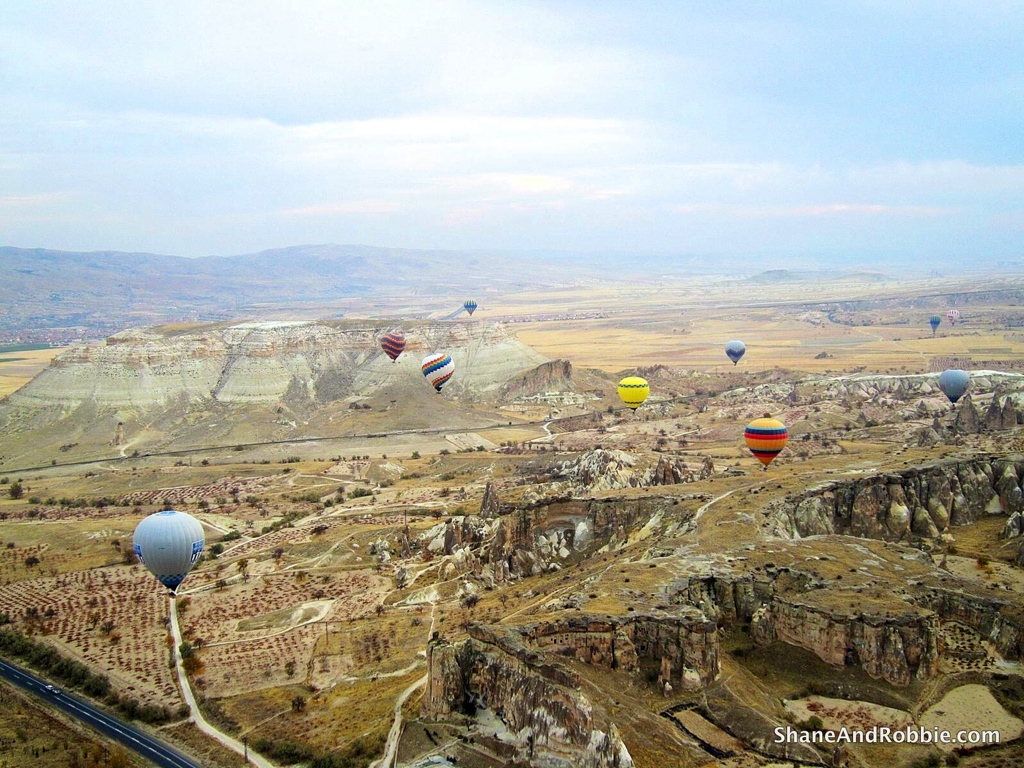 From the highest point in our journey we could almost see the whole valley.

Our landing was as smooth as our take-off and after a quick glass of celebratory champagne we were taken back to our hotel for breakfast and a nap. After resting up we went out for a lunch-time meal and show at a local “cave restaurant”. Carved out of an entire hillside, the restaurant specialised in traditional Cappadocian cuisine. The special of the day was a beef “claypot kebab”, which basically means a stew of beef, aubergines, potatoes, tomatoes, onion and garlic, slow-cooked over 4 hours in an eathern ware pot. It was simply divine. So simple, fresh and delicious that Shane had 3 helpings! 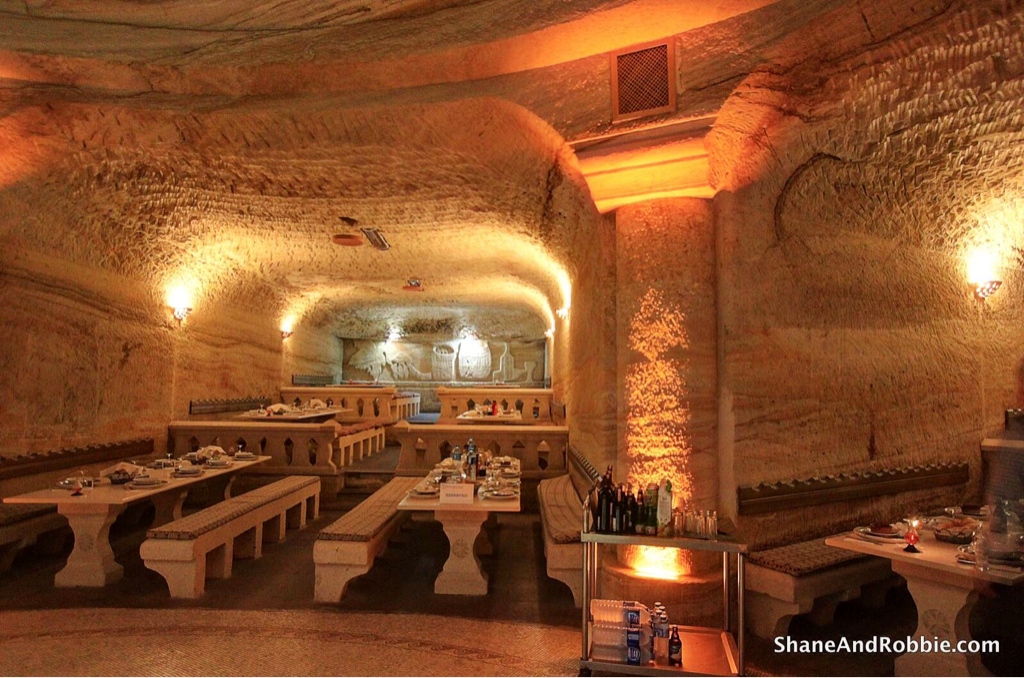 The local “cave restaurant” where we had our best Turkish meal EVER!

After our meal we were treated to a showcase of traditional Turkish music and dancing. The show itself was a little cheesy and touristy, but hey, we’re tourists, so we loved it! There was belly dancing, folk music and an imitation of a Whirling Dervish sema ceremony. A highly entertaining way to spend our last afternoon in Cappadocia. We’re leaving tomorrow and heading back to Istanbul to spend one last night in that crazy city before we fly out on Friday morning. Can’t believe our whirlwind tour of Turkey is almost over already!

Dancers imitating the dance of the Whirling Dervishes. Still cool, even if it was just an imitation!

These guys were doing a very colourful, traditional Turkish version of line dancing. 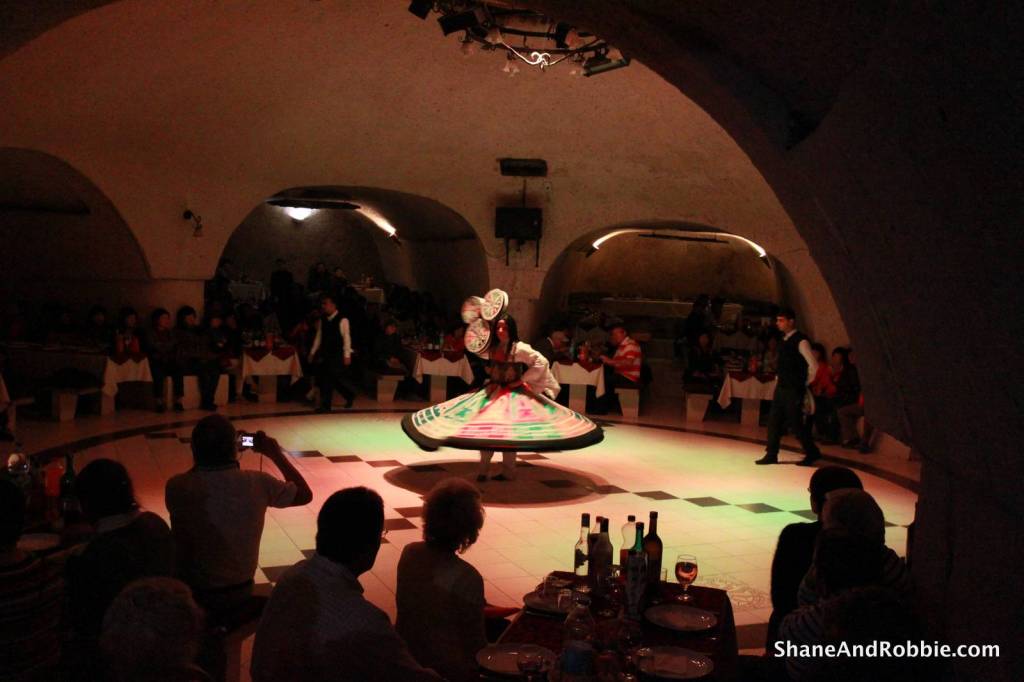 The costume this dancer wore whilst doing her twirly whirly dance was lovely – her movements made the colours of her skirts flare and spin. 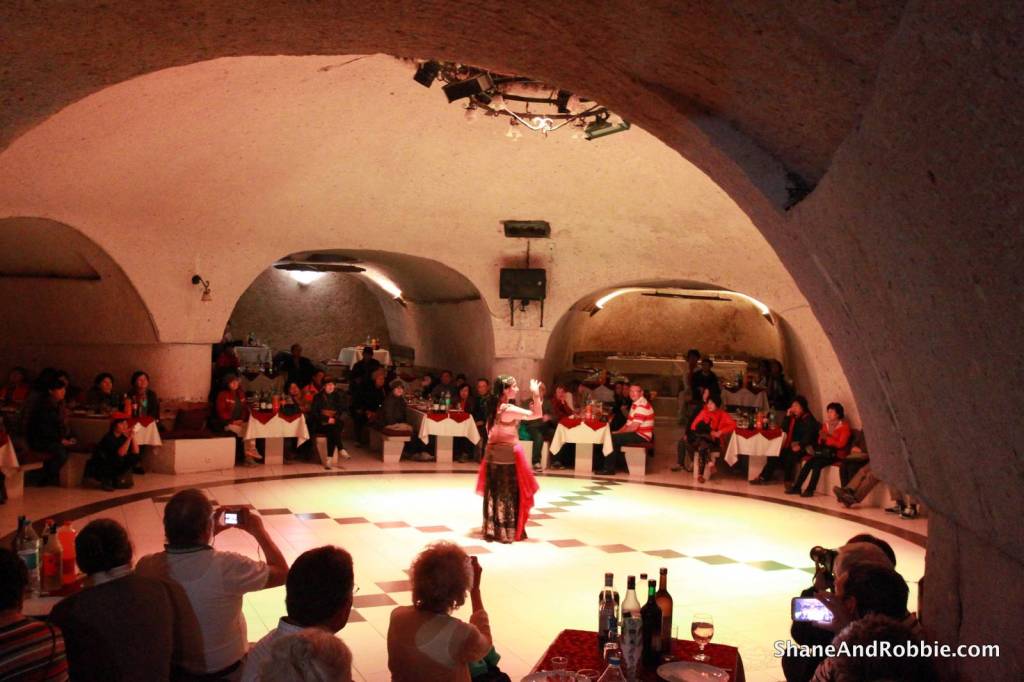 The final act of the night was this awesome belly dancer. Such amazing muscular control!