We left Luxor on the first flight this morning and arrived in Cairo not long after. As today is our last day in Egypt we thought we’d use it to take a look at the city’s main souk (translation = open air market). Like Istanbul’s Grand Bazaar, the Khan el Khalili was a warren of streets, alleys and tiny paved malls that had us lost within just a few short minutes. It was every bit as colourful and chaotic as we had hoped, and we had a great day perusing the wares in the shops and fending off the attentions of all the stall holders.

All the colours, smells and sounds of Cairo’s Khan el Khalili!

As soon as we walked out of the airport here in Cairo the now-familiar smells and sounds of this chaotic city reintroduced themselves. Cars honking their horns incessently, donkeys braying, hawkers touting their wares on the streets, children laughing and chatting as they leave school for the day – it’s all part of the mosaic that is modern-day Cairo! Thanks to the ever-present traffic, it took a surprisingly long time to get from the airport to the Khan el Khalili, but once we were there the market itself was quite quiet. Many of the stalls were still setting up for the day when we arrived at 11:00am, which was actually great as it allowed us to have an inital look through the market and get our bearings without being harassed by too many touters.

Checking out the water pipe shops whilst getting our bearings at the markets this morning before they were in full swing.

It was a labyrinth of alleys and side streets in there!

Unlike the Grand Bazaar in Istanbul, the Khan el Khalili did not seem to be organised into “districts” – there were stalls selling clothes made of the famed Egyptian cotton next to tacky souvenir shops; juice bars selling freshly squeezed pomegranate juice next to jewellery shops; and papyrus stalls standing side-by-side with shops selling alabaster statues and carvings. We generally love strolling through markets and today was no exception – the colours, the smells, the ridiculous calls of the touters! Some of the touters had the most entertaining sales pitches we’ve ever heard. Our favourites from today:

We had an armed escort with us during our explorations of the souk. You can hire one of thes eguys for security to ensure you don’t get “locked in” to a store and forced to buy stuff. Our guide advised us to hire a security guy, “just in case”. Errrrr…, sure – much better than risk being locked into a shop and extorted!

Many of the touters speak smatterings of multiple languages – just enough so they can entice people in to their stores and then barter with them. With our dark hair and dark eyes some of the touters weren’t quite sure what language to throw at us so they tried in English first, then Spanish, then Italian – we even had a bit of Portuguese thrown our way. It’s nice when you can keep people guessing! 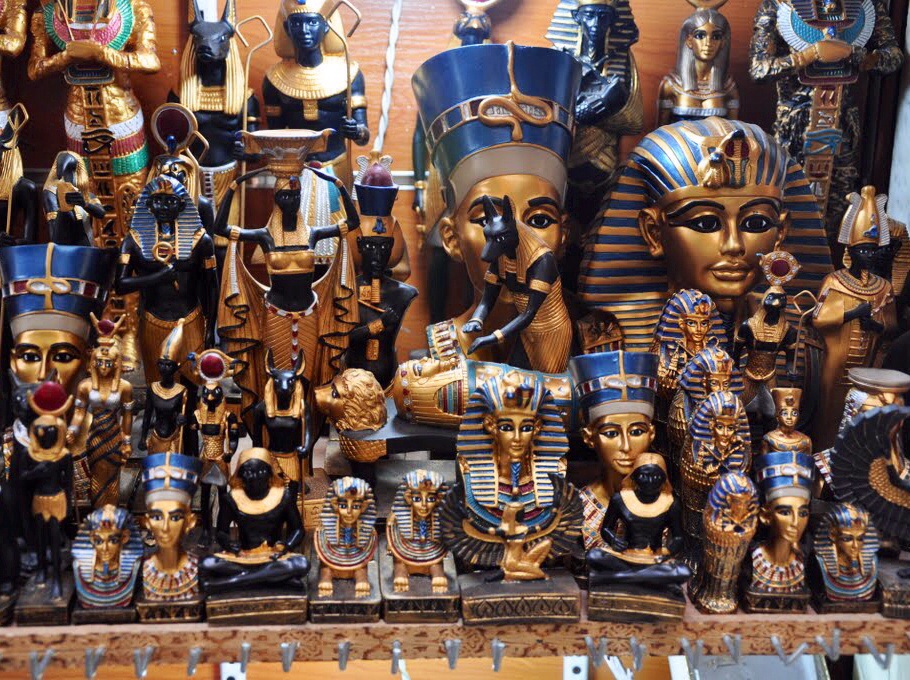 Tacky Egyptian-themed souvenirs abounded – most of them, unfortunately, made in China!

The souk dates back to 1382, when merchant Emir Djaharks el Khalili built a large caravanserai (translation = rest place for travelling traders and merchants) in Cairo. He called the market place that sprung up around his caravanserai Khan el Khalili and the name stuck! Over the centuries the market place expanded and today it covers a number of city blocks. The market’s original doors and some of the original Medieval alleys are still in use – we came across a couple during our wanderings. 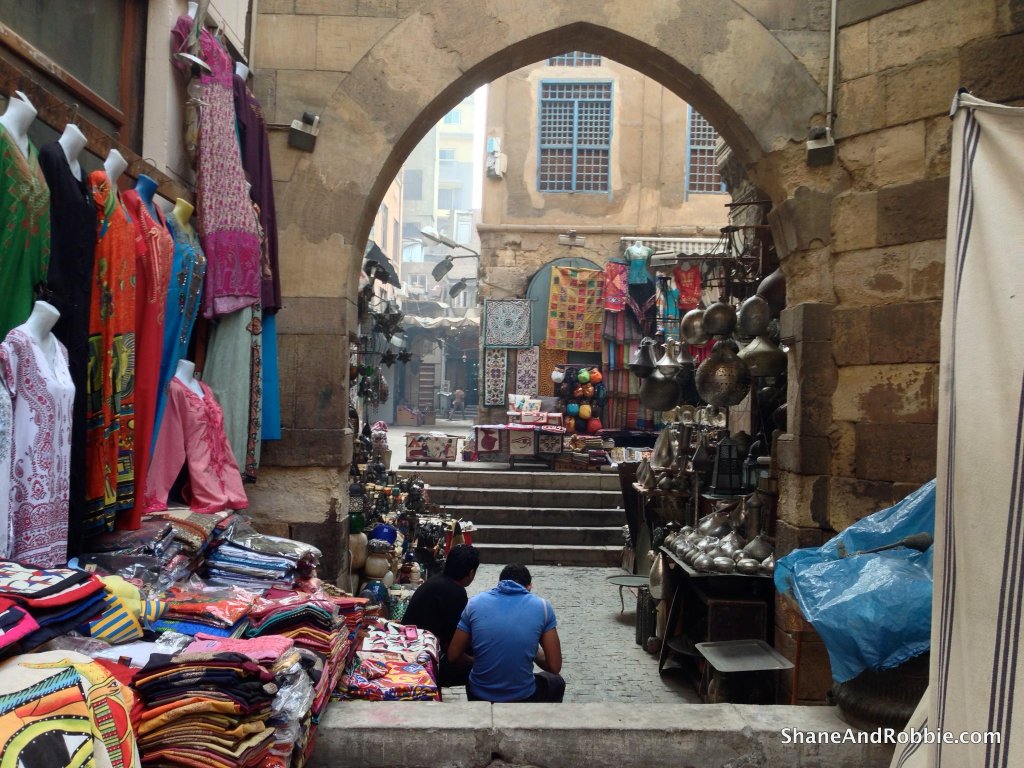 Some of the original market areas from the 14th century are still used today. 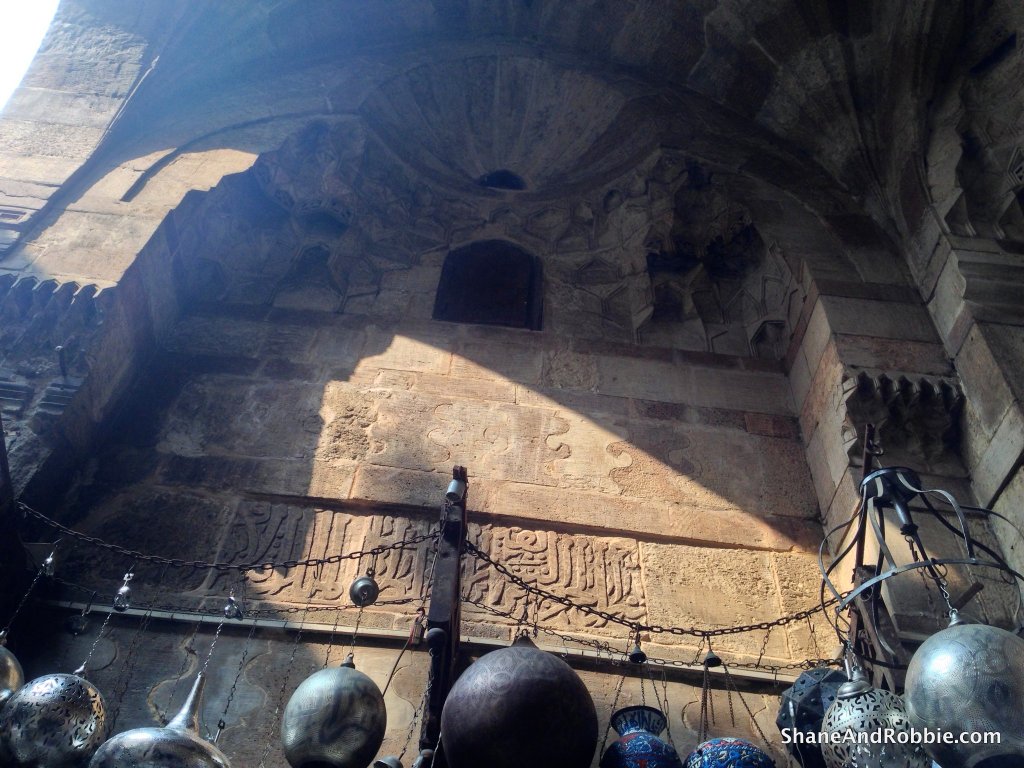 One of the original 14th century gates that used to mark the limits of the market place. Today the souk extends a LONG way beyond its original boundaries.

Aside from browsing in the shops and stalls of the Khan el Khalili bazaar, we also spent time in one of the souk’s coffee shops. Here we joined a few locals and a couple of other tourists for an Egyptian coffee (think Turkish coffee with extra grit and a dash of cinnamon, cloves and other spices). After the bustle of the souk’s streets, the coffee shop provided a welcome retreat and gave us a chance to do some relaxed people-watching. After coffee and a light lunch of kosheri we headed back out of the souk and found our driver and guide again. And now we’re in our hotel, relaxing before our flight out tomorrow and reflecting on our amazing fortnight in Egypt. It’s been fascinating, exhausting, incredible and, in some ways, a little shocking; most of all, though, it’s been memorable.