There are 4 cities in Morocco that have, at various times in the nation’s history, been the premier city: Fes, Marrakech, Meknes and the modern-day capital Rabat. Today we went to visit Meknes, the smallest of these cities. 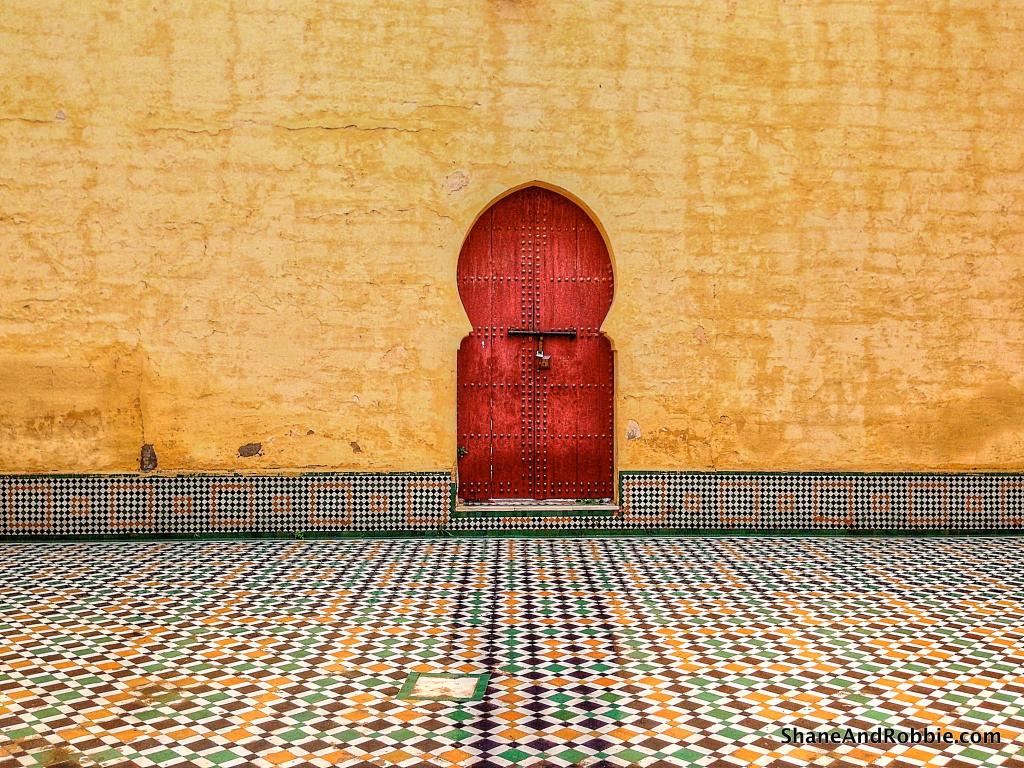 Meknes was the capital of Morocco for 55 years, during the reign of Moulay Ismail (i.e. 1672 to 1727). Moulay Ismail was the second ruler of the Alaouite Dynasty (the family that still rules today), and is held in great reverence by the Moroccon people as he was the first ruler to successfully unite the Berber tribes into a single nation. He also led attacks against the Ottoman Turks, the Spanish and the English. Under his rule the nation of Morocco was forged and a number of territories lost to foriegn invaders were regained. Moulay Ismail was, however, also a tyrant. His nickname was “The Blood Thirsty King” – an epithet he earned by doing things like adorning the walls of Meknes with the severed heads of 10,000 Turkish soldiers, beheading servants he thought were lazy, and killing the 83 brothers who might have contested his throne. Yikes! To prove he was not just a fighter, Moulay Ismail also fathered 888 children (man, that’s scarier than all the killing and beheading!).

In contrast to his turbulent and cruel reign, the Mausoleum of Moulay Ismail was incredibly peaceful and serene. This was the first stop we made in Meknes today. The building that houses Moulay Ismail’s tomb was rather nondescript from the outside, but beautiful inside. We entered through a large wooden door, into the first of many courtyards. Every courtyard was painted yellow and decorated with exquisite zellij. The final courtyard, immediately preceding the actual tomb, was amazing – it was covered in zellij, and contained a fountain, carved and painted wood, elaborately carved plaster, graceful arches and marble columns. We were mesmerised!

*We learnt today that ‎zellij is the name given to the tile mosaics so characteristic of Moroccon architecture. It consists of geometrical designs made from pieces of ceramic tiles pressed into plaster and is used todecorate walls, ceilings, fountains, floors, pools, tables, etc. 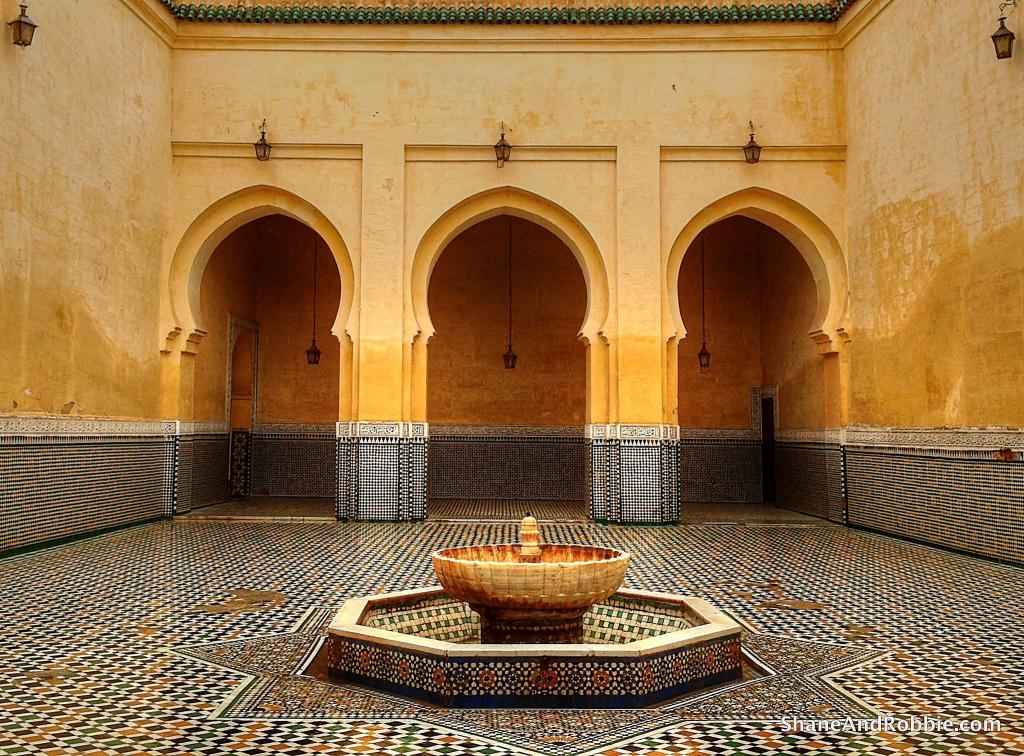 Every courtyard was painted yellow and decorated with exquisite zellij.

The stunning innermost courtyard at the Mausoleum of Moulay Ismail.

Meknes is sometimes called the “Versailles of Morocco” because of its extravagance. Like his contemporary, King Louis XIV of France, Moulay Ismail ordered the construction of an elaborate imperial palace and other monuments. He also had the city surrounded by a thick defensive wall and built one of the world’s largest granaries to store food in case of a siege. The palace was all but destroyed in 1755 by an earthquake, but the granaries and royal stables survived. Moulay Ismail’s immense grain storage rooms, known as the Heri es-Souani, contained tiny windows, thick insulating walls and a system of underfloor water channels kept the temperature constant and the air circulating. Next to the building the king had stables built which accommodated 12,000 horses. The wooden roof of the stables has long since deteriorated, but the rest of the stable and granary complex was in great condition and made for some interesting touristing. 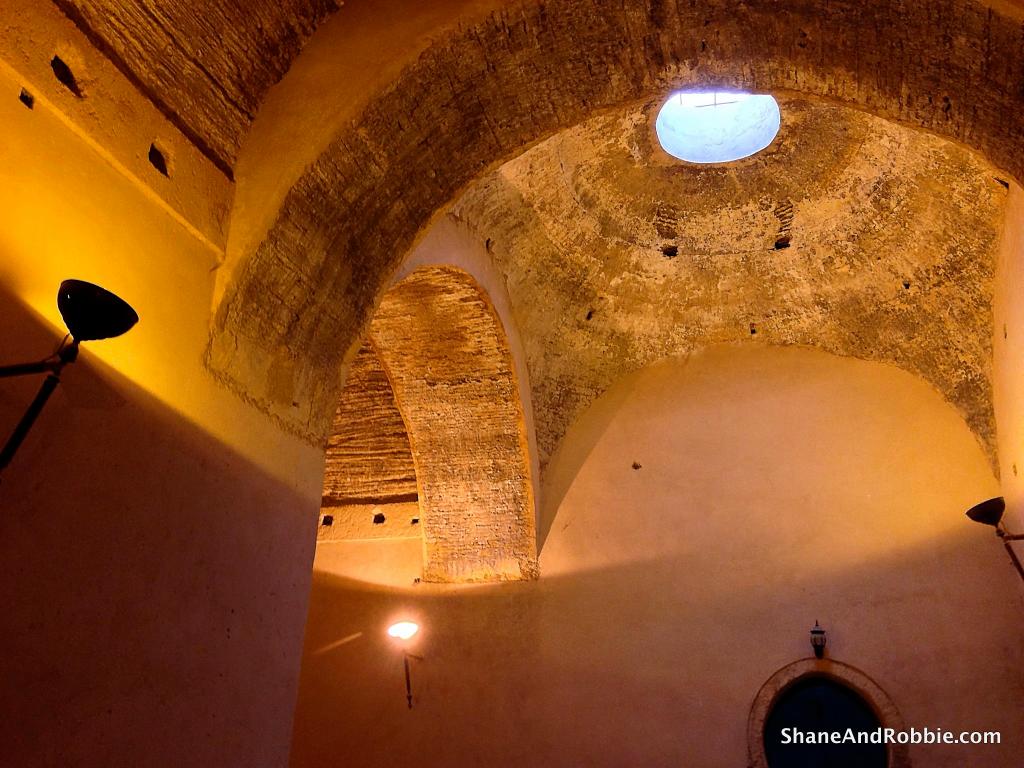 The ruins of the royal stables, which used to hold 12,000 horses.

Another monument built during Moulay Ismail’s time was the Madrasa Bou Inania. A madrasa is an Islamic learning centre, and though this one is no longer in use, it demonstrated for us how they are set up: the school had a large central courtyard around which were arranged small rooms for boarding students. There was also a large prayer hall/classroom and a hammam (translation = public steam room and ablutions block) for the students. Again, the zellij decorations were mesmerising – no wonder people rave about Moroccon architecture and design!

The inner courtyard of the Madrasa Bou Inania.

Finally, we also went to see the Dar Jamai Museum, a small museum displaying traditional Moroccon ceramics, jewellery, rugs, textiles and embroidery from the 17th, 18th and 19th centuries. More than the displays themselves, we were captivated by the building! The museum is housed in a the palace of the once-powerful Jamai family, 2 of whom were royal viziers during Moulay Ismail’s reign. With its multiple courtyards, fountains and ornately decorated rooms, the palace must have been an amazing residence.

This room was once used for formal dinners and to entertain guests.

We’re developing a liking for Moroccon architecture, especially the geomatrical patterns used decoratively. So imagine our delight when we checked in to our hotel today and discovered it’s a beautifully decorated, fully renovated 18th century riad (translation = traditional Moroccan house with an interior garden or courtyard)! Too cool!

Tonight’s accomodation: a traditional riad which has been converted into guesthouse.

There is a lot of history here in Meknes, most of it centred around Moulay Ismail. It was great being able to explore some of this history today – we’re beginning to get a feel for Moroccon history and see how the modern nation of Morocco was shaped. One of the things we’ve already learnt is that the Berber people who are indigenous to this area have always been very fiercely protective of their independance and freedom. Over the centuries they have fought against every nation that has tried to invade, enslave or dominate them (they’ve also fought amongst themselves a fair bit too, with tribal wars keeping the Berbers busy in between other wars it seems). This fierce independence and desire for self-rule is reflected in the Berber’s name for themselves: they call themselves the Imazighen (translation = free people). The term “Berber” was a pejorative term introduced by the Romans who, unable to dominate the nomadic tribes of Morocco and North Africa, referred to them as barbarians. From what we’ve seen of modern Morocco, that would have to be one of the worst misnomas ever! This is definitely still Africa, there’s no doubt about that, but Morocco is a far from “barbaric”!

Digging the Moroccon history in Meknes.