We left the plains of Maasai Mara today and drove North to Lake Nakuru National Park. Famous for its resident population of pink and white flamingos, Lake Nakuru is one of the Rift Valley’s highly alkaline “soda lakes”. The area around the lake has been a national park for over 50 years and houses lots of buffalo, water buck, zebra, gazelles, giraffes, baboons and numerous species of water birds. The main reason we really wanted to spend some time at Lake Nakuru National park, however, is to see rhino – the park is home to one of Kenya’s largest population of rhino.

Lake Nakuru National Park is famous for its flamingos.

Our journey began early this morning but suffered a bit of a hiccup when our safari vehicle broke down on the way out of Maasai Mara (the roads in and out of the Mara are terrible and one of the larger bumps we hit did some damage to the car’s under-carriage). Luckily we weren’t too far from the nearest village and we were able to get some local mechanics to come and take a look. Rather than have us standing on the side of the muddy road, Henry, our driver/guide, stayed with the car whilst the mechanics did the on-the-spot repairs whilst we were taken on to the nearest town, Narok, by another driver.

The safari vehicle Henry had flagged down for us turned out to be carrying the Teoh family from Singapore. They were lovely and we chatted to them for about an hour before reaching Narok (the Teohs were heading back to Nairobi, having just finished their safari through Kenya and Tanzania). They dropped us at a service station in Narok (a tiny town in the middle of nowhere) with the reassurance that Henry wold be past to pick us up within the next hour or so, once the car was fixed.

We’ve never felt quite so conspicuous as we did in that moment! As the Teoh family and their driver pulled away, we were left standing on the side-walk with our backpacks and suitcases in a very small, rather provincial and entirely black Kenyan town. Luckily the service station had a restaurant attached and we we able to sit and grab a cup of tea whilst waiting for Henry. The locals seemed a little confused as to why 2 white people, very obviously tourists, would be hanging out in Narok, but no one bothered us and the time went quickly enough. We were soon on our way again – Henry turned up after just an hour and 3 hours later we arrived in Nakuru. 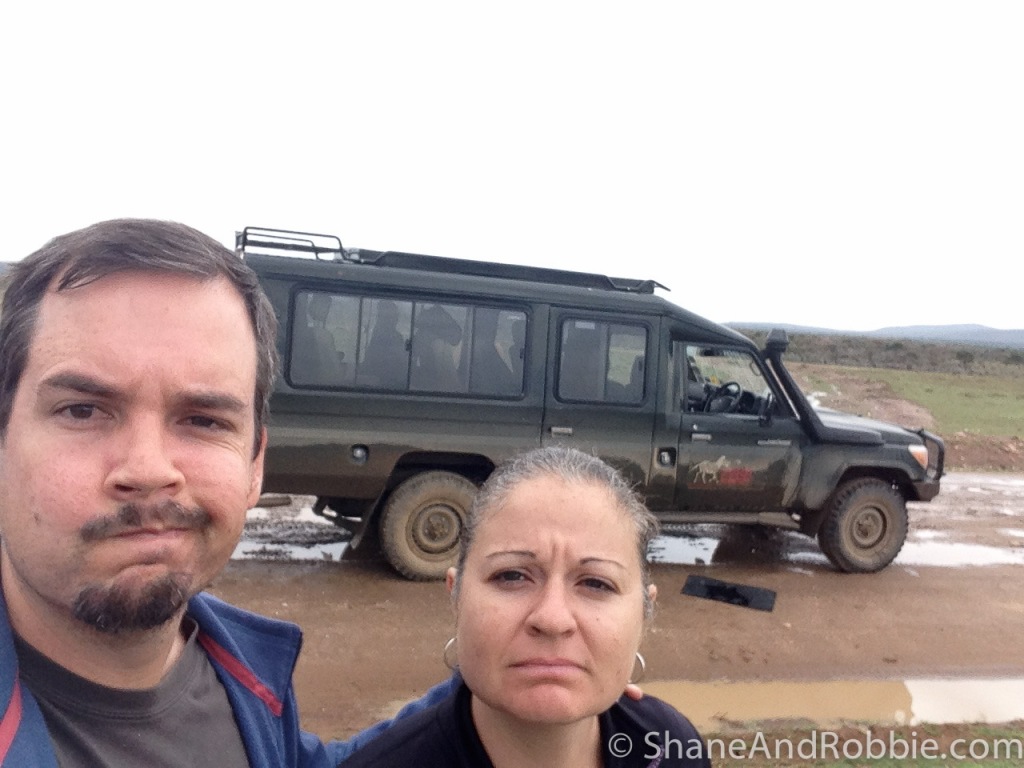 Not so impressed with breaking down…

Nakuru is Kenya’s 4th largest town (after Nairobi, Mombasa and Kisumu) and is the main commercial centre that services all the farmland in Kenya’s Northern highlands region. The main crops grown around Nakuru are coffee, wheat, corn and beans;. This part of Kenya is beautiful – all green rolling hills, fertile farmland and lush forest. Being elevated (around 1800-2000m), it’s also a bit cooler up here and mosiquitos and malaria are less of a risk too. Tourism is also big business here – the city of Nakuru sits right alongside the lake and national park so many tourists stay in town when visiting Lake Nakuru National Park. We’re really lucky though – we’re staying in another awesome tented camp that is actually inside the national park! It’s gorgeous and our tent is very luxurious; forget camping, this is how to enjoy the wilderness! 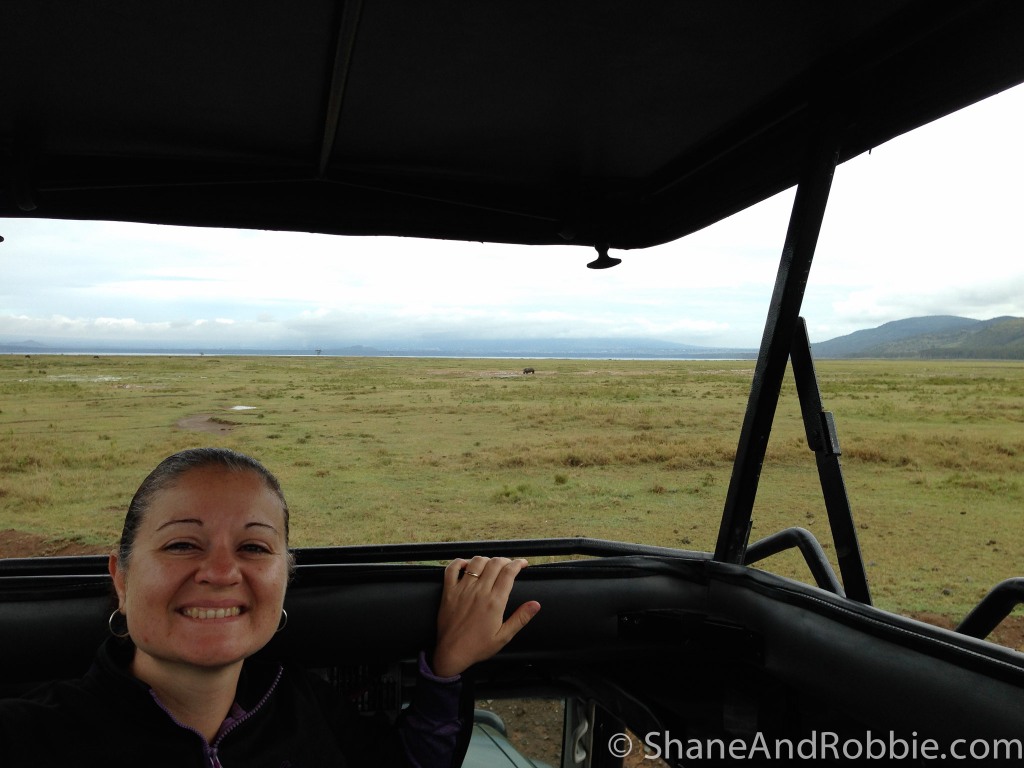 Setting out for our afternoon game drive….

Upon arrival at the camp we checked in and grabbed a quick lunch before setting off for our afternoon game drive through Lake Nakuru National Park. This relatively small national park (188 km²) was created in 1961 and surrounds Lake Nukuru. It’s a fully fenced, highly regulated park with armed rangers constantly on patrol to ward against poachers who come seeking rhino horns. The park is best known for its thousands, sometimes millions, of flamingos nesting along the shores. Flamingos feed on a particular type of shrimp that flourishes in the alkaline waters of “soda lakes” like Lake Nakuru (the pH of the wate rin the lake is about 9.0-9.4). These shrimp are high in carotenoids which, when ingested in large quantities by the flamingos, turns these normally white birds pink and red. The number of flamingos on the lake varies depending on the availability of these shrimp; if there has been too much rain the pH of the water drops which reduces shrimp numbers and therefore flamingo numbers. Equally if there has not been enough rain the pH becomes too alkaline which again reduces shrimp numbers and sends the birds flying South towards Lake Barringo or Lake Natron in Tanzania. Luckily for us the water level and pH was just right today and we got to see heaps of flamingos! 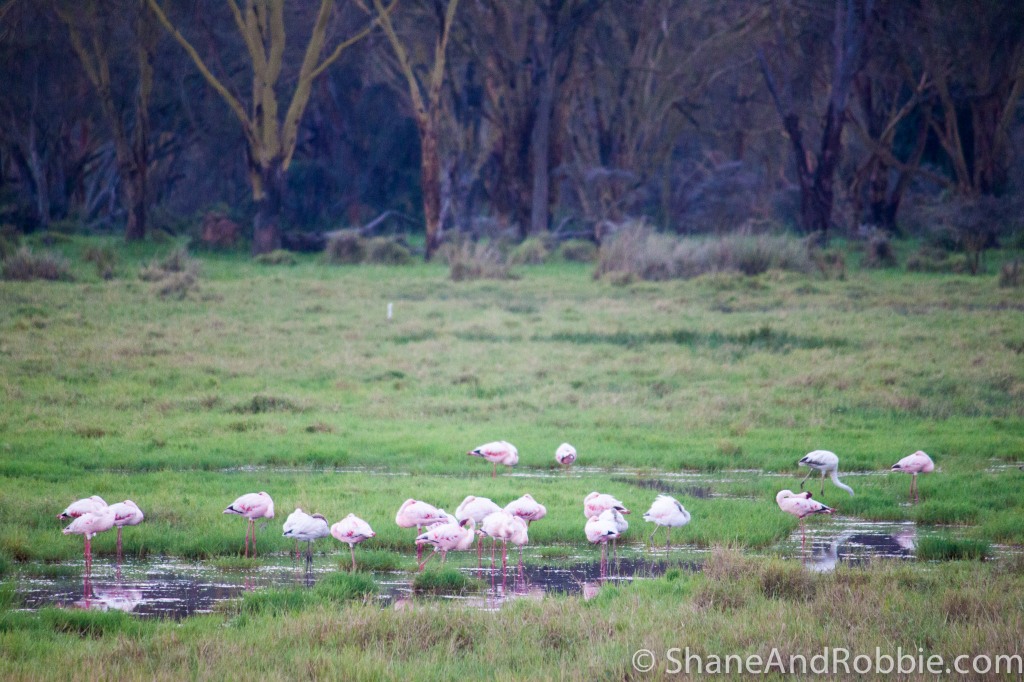 As well as flamingos, there were myriad other bird species in the park, including eagles, herons, egrets and kingfishers. We also saw lots of buffalo and water bucks, though no rhinos unfortunately (a few of our favourite animals photos from today are below for your viewing pleasure). We’re here for another day so hopefully tomorrow we’ll get to see some more wildlife and maybe even spy one of the highly endangered rhinos…