Ngorongoro Crater is spectacular. Never have we seen so many wild animals, such incredible scenery and enjoyed a day’s game drive so much. We were up at 5:00am this morning, eager to hit the road early so we could see the crater come alive with the dawn. We also wanted to get through the gate early as they limit the number of safari vehicles that can enter the crater at any one time to 500 and we didn’t want to miss out! As we descended down through the forest that lines the steep slopes of this ancient caldera the early morning mists gradually abated, revealing a cloudless blue sky above us and an ocean of green grass below us on the crater floor. 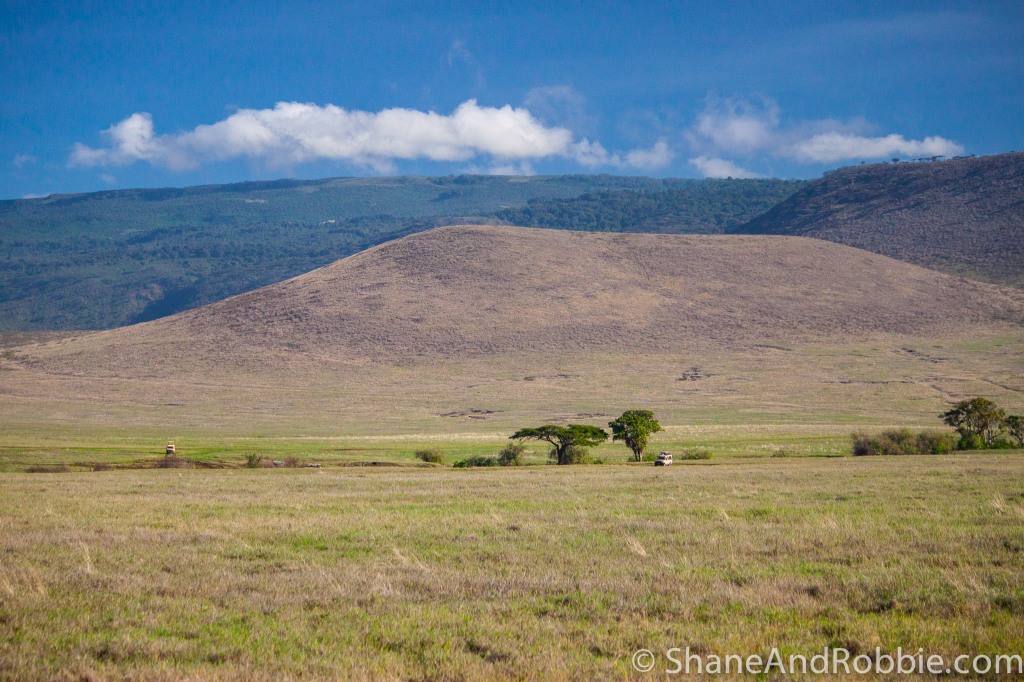 Ngorongoro Crater at about 7:30am, once the morning mist had lifted and the sky revealed itself.

Ngorongoro Crater lies at the heart of the Ngorongoro Conservation Area. This large, unbroken caldera formed when a giant volcano exploded and collapsed in on itself some 3 million years ago (scientists estimate that, had it not imploded, the Ngorongoro volcano would have rivalled Mt Kilimanjaro in size). The crater is about 20kms across and sinks to a depth of 610m; it’s surrounded by steep forested walls that create a natural barrier which keeps the animals in and (most) people out. This unique geographical formation has played host to numerous documentary crews, scientific research teams and film crews (many scenes from “Out of Africa” were filmed there). It also welcomes half a million tourists just like us every year, all keen to see some of the crater’s famous wildlife at play. 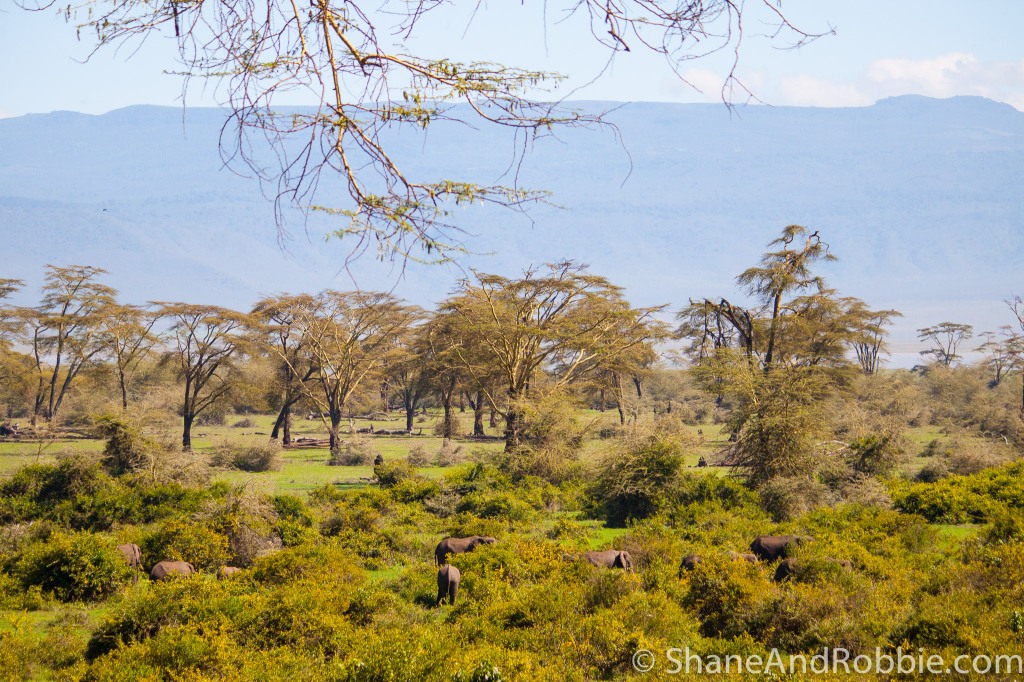 Within the Ngorongoro Crater there are a number of different types of vegetation areas, including grassy plains, wetlands and acacia forests like this. 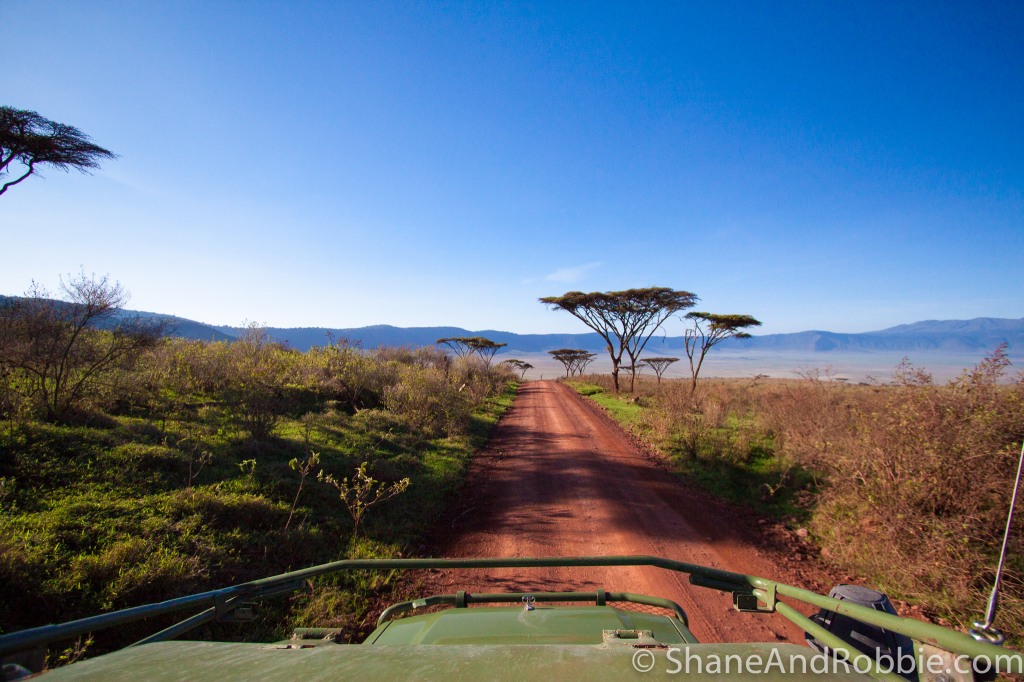 The soil in this area is all red, rich, fertile volcanic soil.

There is even a lake in the crater that supports a healthy population of flamingo and other water birds.

Within the crater there are some 25,000 large animals – including 26 black rhinos, 62 elephants, a few dozen hippos, 100+ giraffe, 200+ ostrich, 7,000+ wildebeests, 4,000+ zebras, 4,000+ buffalos, 3,000+ eland, 3,000+ impala, Grant’s and Thomson’s gazelles and what seemed like a million warthogs. Feeding off these happy grass-munchers are the the crater’s carnivores – Ngorongoro Crater contains leopards, hyenas, jackals, wild dogs, cheetahs, and the densest known population of lions in the world. Additionally there are vast flocks of water birds, including pelicans and flamingos, which hang around Lake Magadi – a “soda lake” which lies within the crater. All of this incredible diversity of wildlife, concentrated in such a small contained area, makes Ngorongoro Crater one of the most amazing places in the world to go for a game drive. We saw so many animals in the 6 hours* we were there, it was fantastic!

*In an attempt to control traffic through Ngorongoro Crater the Tanzanian Wildlife Authority not only restricts how many safari vehicles can enter the crater at once but also how long you can be in there for: you only get 6 hours per day of game drive time. For us this meant we were basically back at Ngorongoro Farmhouse in time for lunch which was nice!

There are so many animals within Ngrorongoro Crater that we were literally stumbling across wildlife left, right and centre – even better, sometimes all we had to do was turn the engine off and stay still as the wildlife came to us!  That’s exactly what happened when, in the heat of the late morning, we spotted a heavily pregnant lioness heading towards us. She waddled towards us in that ungainly way all heavily pregnant female mammals waddle, passed within touching distance and then, with a great sigh of exhaustion, flopped down right beside us in the shade of the safari vehicle. Charles, our driver/guide, postulated that she may have been on her way to find a place to give birth and was just enjoying the shade whilst she could. Whatever the reason, it was amazing having this wild animal sitting just a metre or so away and being able to watch her undisturbed for so long. We eventually switched our engine back on and continued on, much to the lionesses consternation! As soon as her shade was removed, she heaved herself to her feet and continued on, towards the crater rim and the forest.

We saw the lioness approaching from a distance….

We sat and waited to see what she would do… she just kept coming towards us.

Pregnant and obviously wounded (you can see the gash on her rear left leg in this photo), she seemed keen to rest in the shade of our car for a while.

We happily let her relax in the shade beside our safari vehicle for a while, admiring her leonine profile.

As if the pregnant lioness wasn’t enough, we also got to see a young lion couple slinking off into the bushes for some “private time”, and a whole lots of hippos and elephants basking in the water holes which had been filled after the recent rain.

These guys slunk back into the reeds for more, ahem, “private time” after a brief interlude and a look around.

There were flocks of flamingos along the shores of Lake Magadi, Kori bustards foraging for insects in the grass and some beautiful crested cranes as well.

Crested cranes mate for life and often die if their life partner is killed.

One of the goriest discoveries of the day was when we came across a couple of jackals eating a hare they had recently caught and dismembered. Ahhh, the wonders of the “circle of life”… 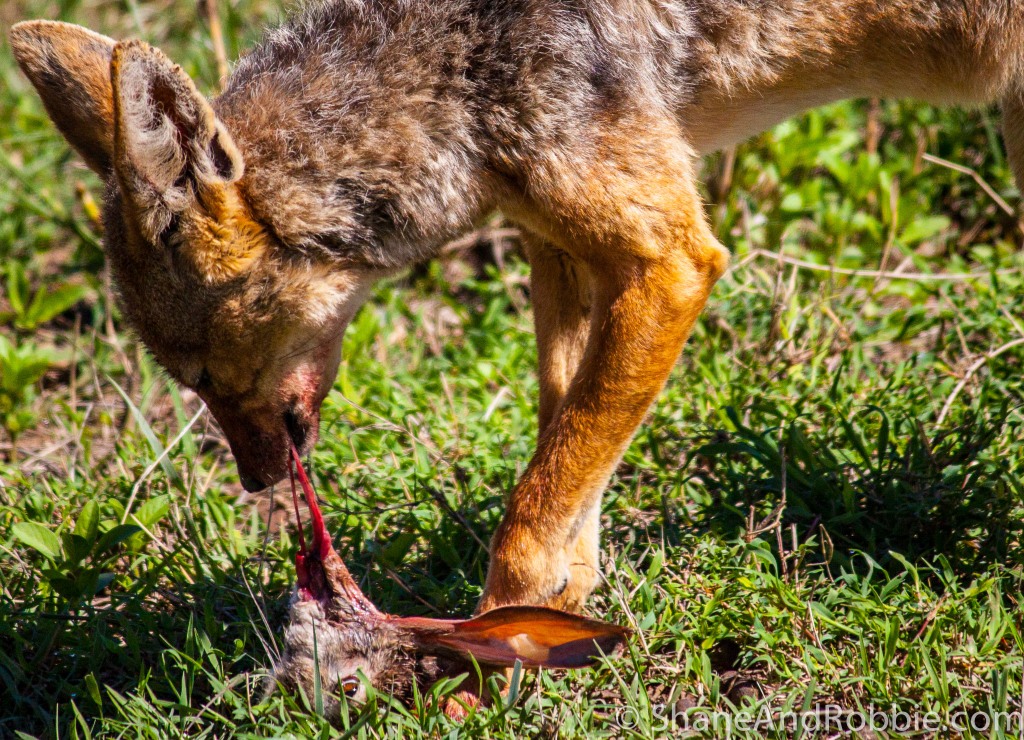 Jackal decides to take his breakfast leftovers and store them somewhere safe for later.

In some ways it’s such a pity we only had 6 hours inside the crater – there’s just so much to see down there and because it’s a relatively small area, it’s so easy to see so much! Unspoilt and isolated as it is, Ngorongoro Crater is like a small piece of Eden frozen in time. It is without a doubt one of our favourite safari destinations and a place we’d love to come back to some day.

Ngorongoro Crater – definitely worth coming back to one day!