In an attempt to recover from yesterday’s Christmas excesses we decided to go from a long walk along the beach today. On the way we came across the Diani Beach Colobus & Monkey Conservation Trust (www.colobusconservation.org) and ducked in for a visit to see some cute little (and big) monkeys up close. This not-for-profit animal conservation organisation established to promote the protection of primates indigenous to the coastal forest here in South-Eastern Kenya. The organisation was established in 1997 in response to an outcry from local residents about the high number of monkeys being hit by cars on the roads of Diani Beach. They take in injured monkeys, treat them and rehabilitate them to the wild; the trust also runs educational programs for local school kids designed to help promote awareness of animal conservation issues; and to address the monkey-meets-speeding-car issue directly they’ve installed “sky-ways” across the main roads here for the monkeys to use to cross the road safely. You can also visit the trust in Diani and do a short “eco tour” which allows you to learn about the work they do and see some of the monkeys they are currently rehabilitating. We saw a number of black & white colobuses, as well as a few vervet and Sykes’ monkeys.

One of the partially rehabilitated residents of the Diani Beach Colobus & Monkey Conservation Trust.

Black & white colobuses are native to East Africa and are particularly threatened as their habitat is being destroyed by logging and to make way for housing and hotels here in Daini; they are often hunted for “bush meat” (i.e. meat from wild animals) as well. They’re beautiful creatures, with tiny pixie-like faces and long black and white fur. It was great watching them eat together, groom each other and relax in the warmth.

A couple of black & white colobus monkeys check us out…

…and decide we’re not a threat, so they just went back to eating passionfruit vine leaves.

Sykes’ monkeys are similarly threatened due to habitat loss and human/wildlife conflict. These blue-furred primates are much more inquisitive than the colobuses and ventured quite close to us. It made photographing them fun! 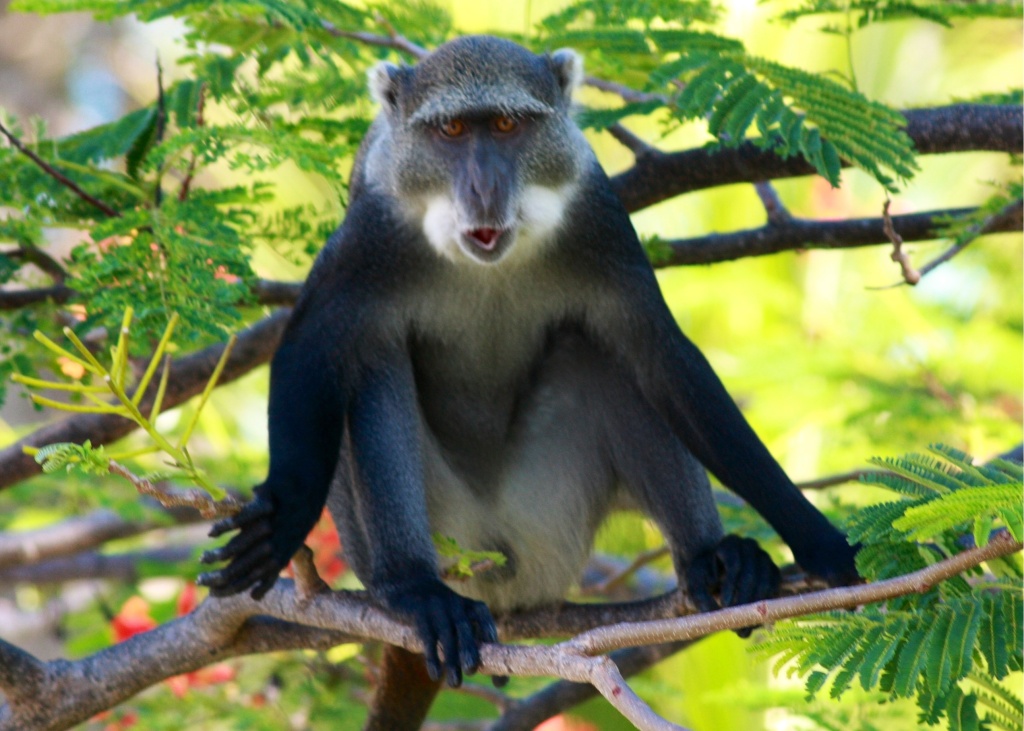 An adult Sykes’, or blue, monkey.

Vervet monkeys are much more common here in Kenya and are pretty cute. Growing up in Mombasa vervet monkeys were a constant presence in our garden and I’d often come back from school to find a monkey sneaking into the house trying to grab a banana or some other piece of fruit from the fruit bowl in the kitchen. Like the colobus monkeys though, human development has encroached on the vervet’s wild territories, and they’re being is killed by electricity, speeding cars, dogs, poison and even bullets; they’re also trapped for use in traditional African medicine, as bush meat and for biomedical research.

This young vervet monkey had been brought in after being hit by a car.  He’d been ppatched up, rehabilitated and was in the process of being released into the wild to join oone of the local troops. 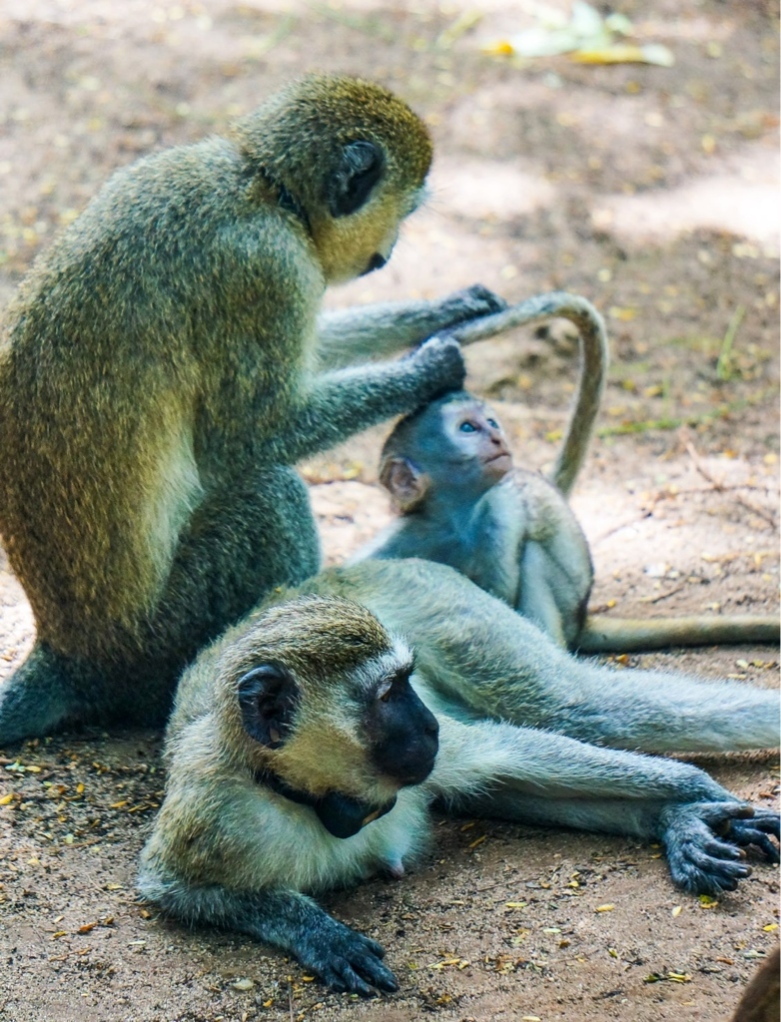 The Trust attached radio collars to the monkeys they release back into the wild (you can see one on the vervet monkey lying down here). These radio collars allow researchers who visit to monitor their movements  and gain a better understanding of their  behaviours in the wild.

Visiting the Diani Beach Colobus & Monkey Conservation Trust was the most exciting thing we did today – beyond that we just spent a whole lot of time swimming, relaxing on the beach and reading by the pool. Shane went down to the surf club and had some fun learning to wind surf, which was quite entertaining for me! A few weeks here will give us a great holiday from our holiday…

Already working on our tans….