KUNMING’S SPECTACULAR STONE FOREST
One of Yunnan province’s most outstanding natural wonders is the Shilin Stone Forest. Just 100km out of Kunming, this limestone forest is a surreal landscape of limestone spires, jagged wind-shaped peaks and mounds of rock worn smooth by water. We spent most of our day wandering through this treeless “forest”, enjoying the serenity and spectacle of this natural wonder. 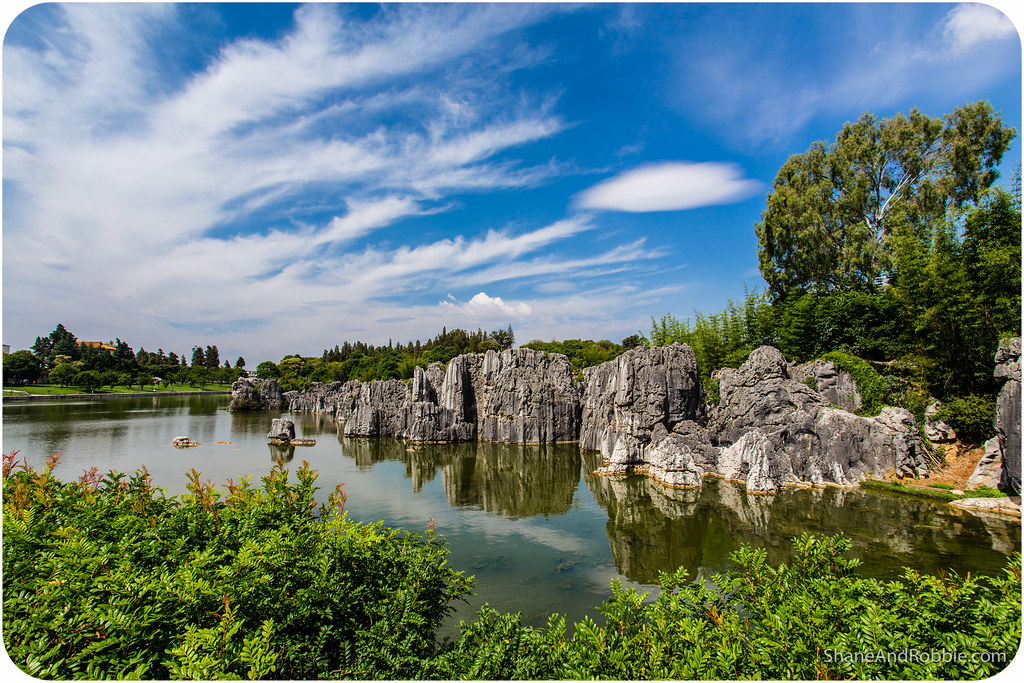 The Stone Forest has been a UNESCO World Heritage Site since 2004 and is one of the main attractions in this area. Yunnan doesn’t attract the same numbers of tourists* (domestic or international) as Guilin and Yangshuo however, so we weren’t swamped by tour groups and actually got to enjoy this intriguing natural setting in peace and quiet. The section of The Stone Forest we visited is a tiny fraction of the entire 1,100 square kilometre park. Made more accessible for visitors with the recent construction of paths in, around and through the ancient monoliths, the “Major Stone Forest” area was a fascinating mix of towers, spires and oddly shaped rock.
*They only get about 3 million Chinese visitors per year to The Stone Forest, and less than 500,000 foreign tourists. 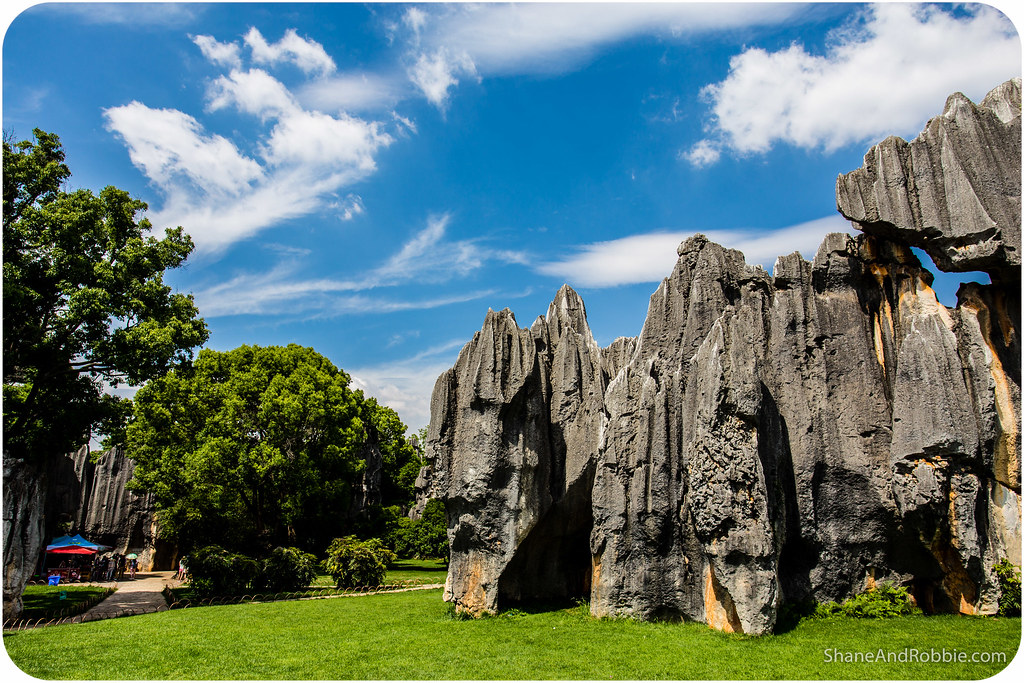 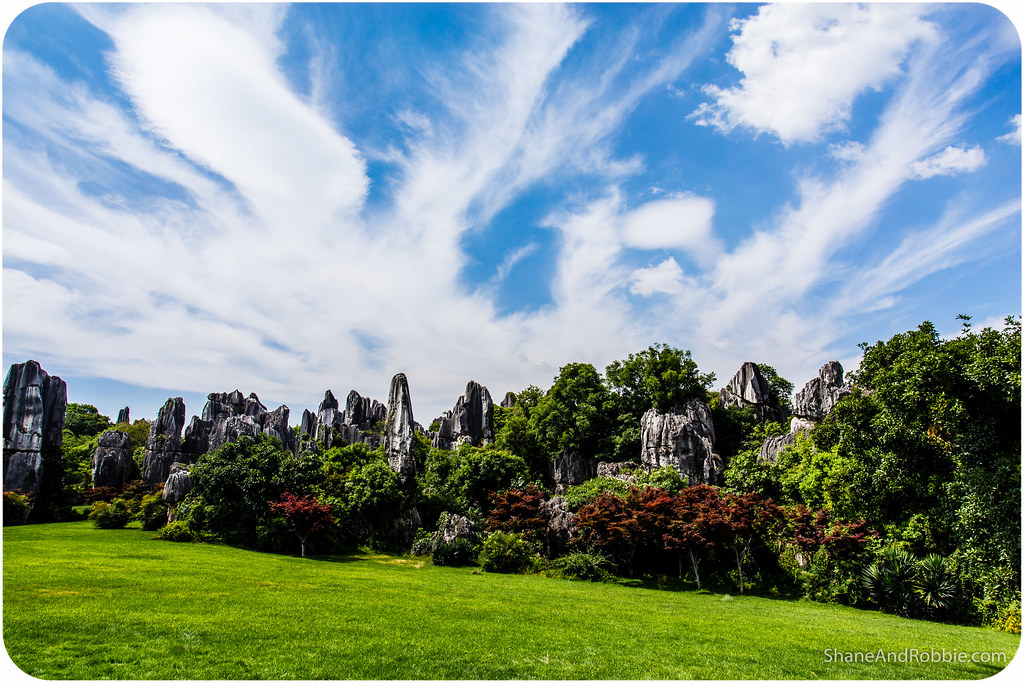 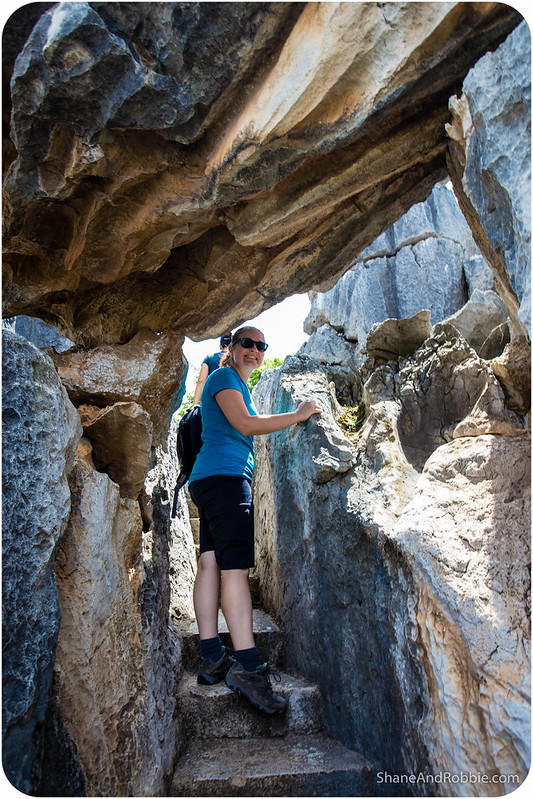 Originally part of an ancient sea bed, the limestone deposits were exposed some 270 million years ago by major movements in the Earth’s tectonic plates. Over time the elements have worn away the softer rock, leaving behind these stone “trees”. As is common here in China, many of the rocks have been given poetic names based on their shape (e.g. turtle riding elephant; the kissing couple; the satisfied cat; and even King Kong). Sometimes we had to squint a little to really see the shapes being described, but like naming the shapes of clouds, it was a fun game all the same. 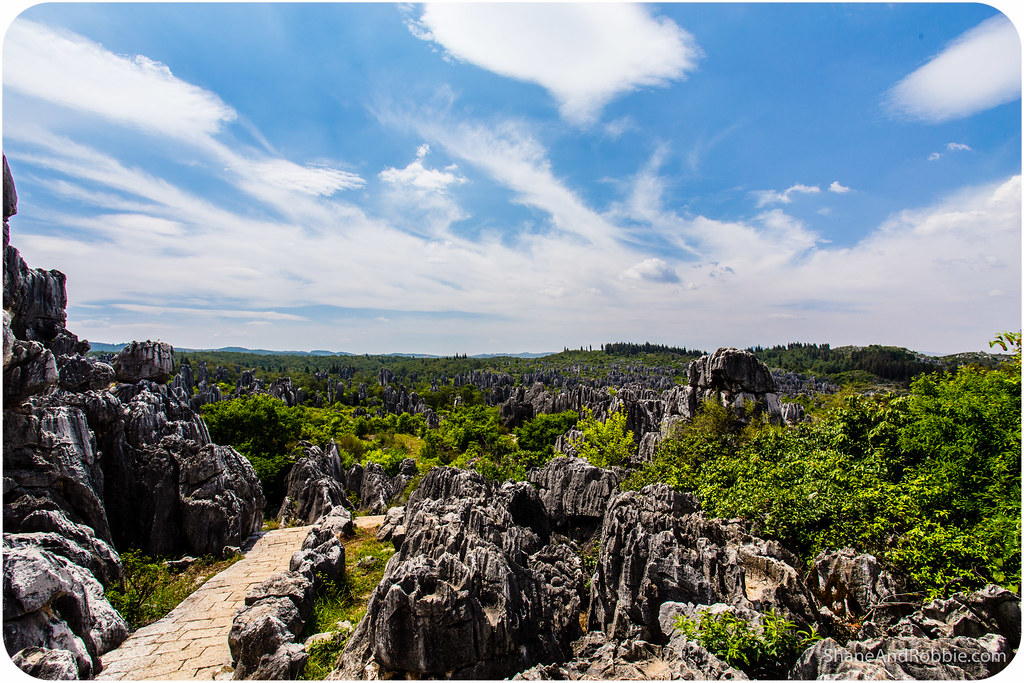 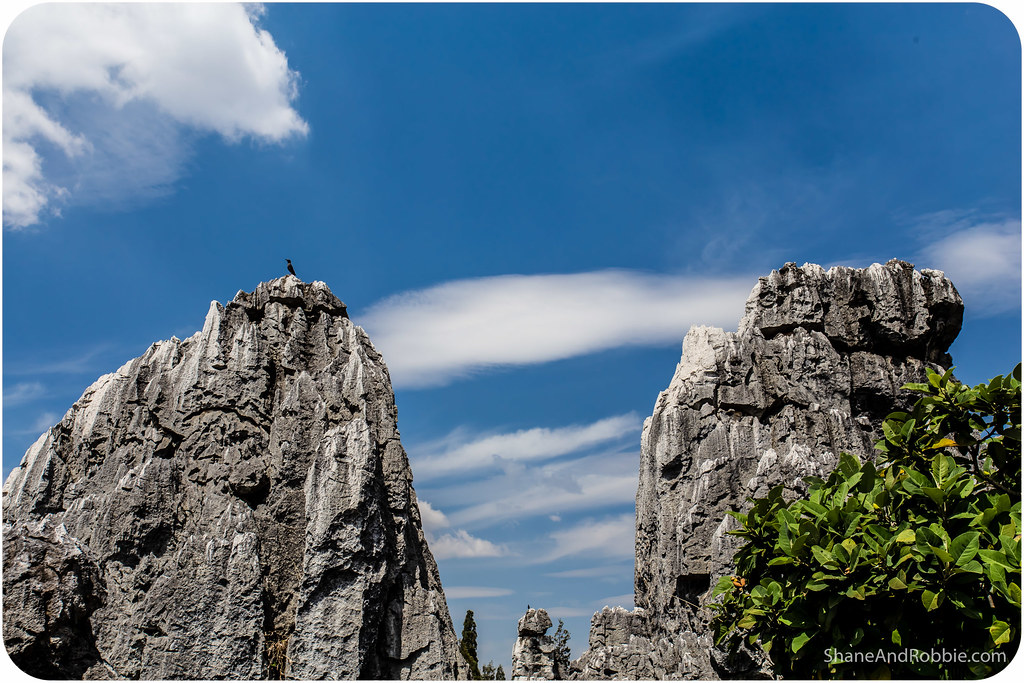 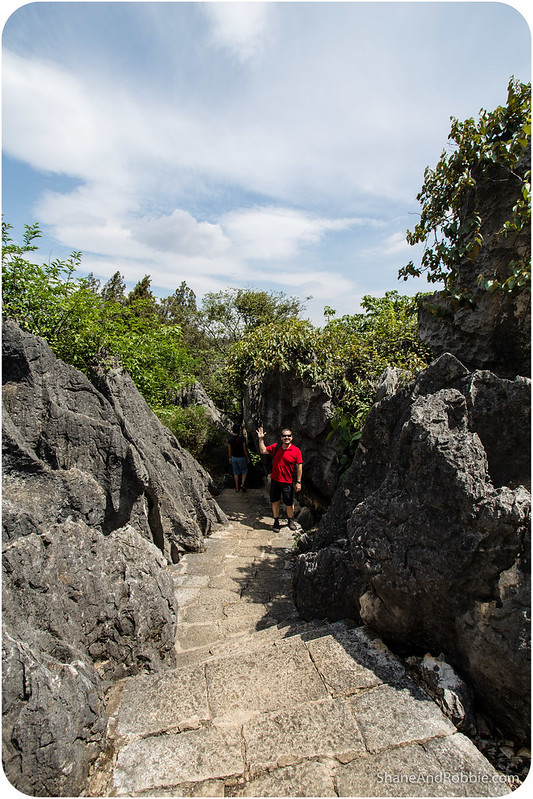 One of the most famous stone shapes is that of Ashima, a beautiful girl who fell in love but was forbidden to marry her true love. Rather than marry another, she turned herself to stone and today lives at the heart of The Stone Forest. 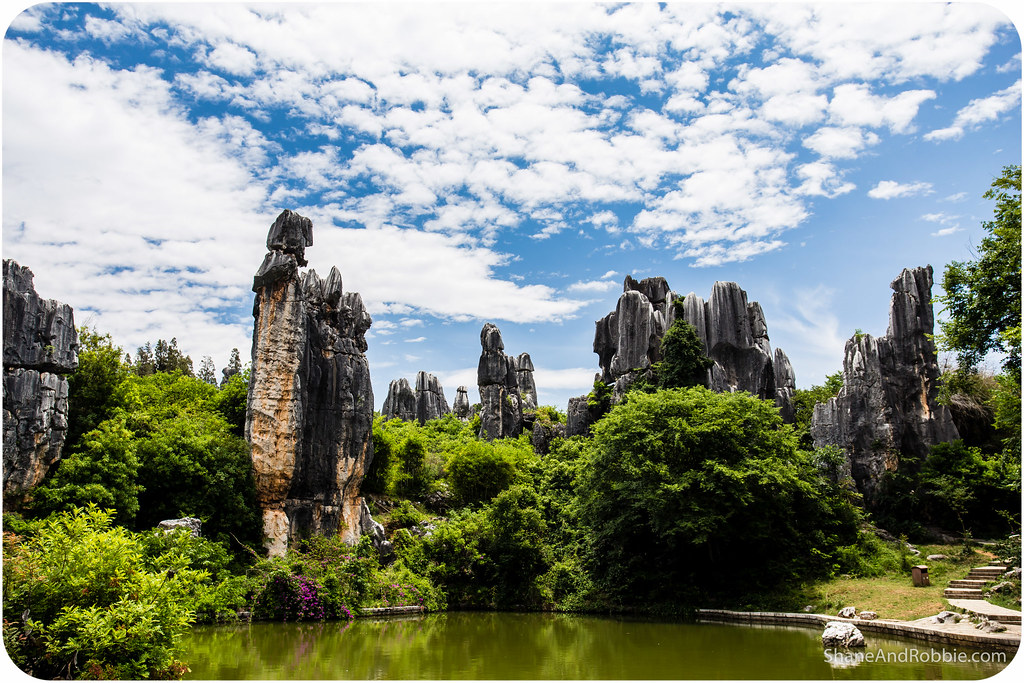 Some of the park has been heavily landscaped and turned into the kind of faux natural wonder the domestic Chinese tourists seem to love. As pretty as it was, we skipped through this part pretty quickly and moved deeper into the “wilder” parts where nature was the landscaper, not man. 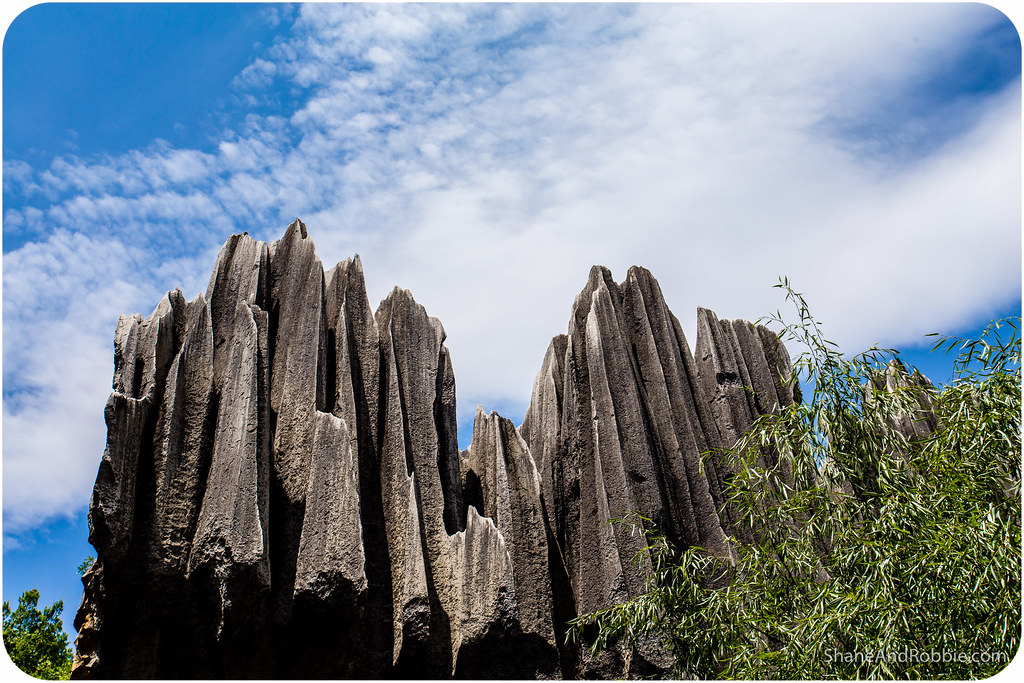 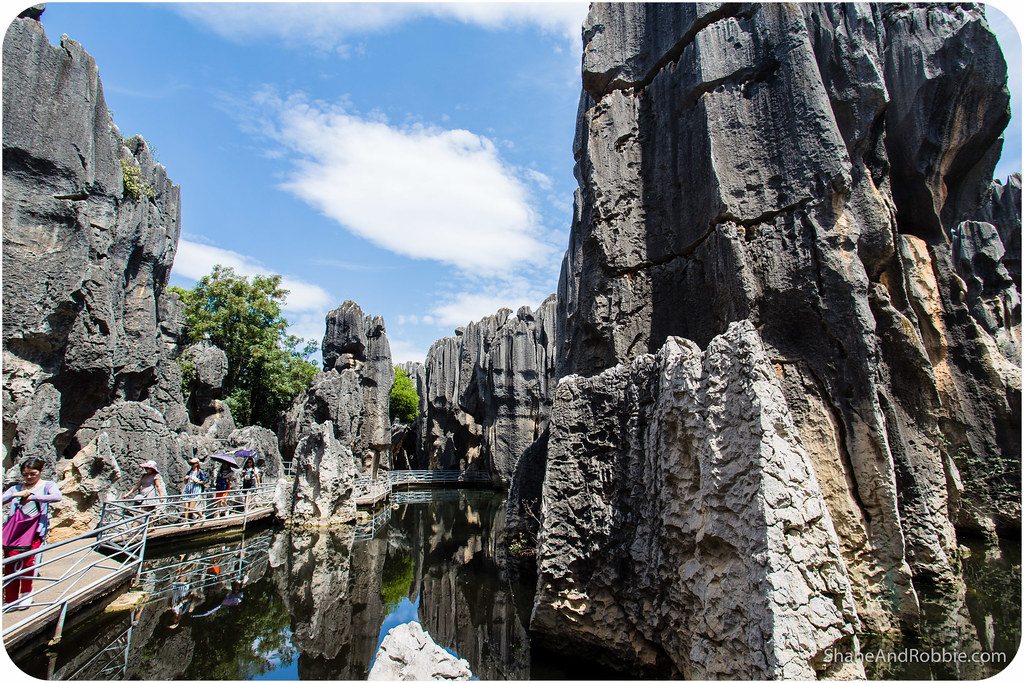 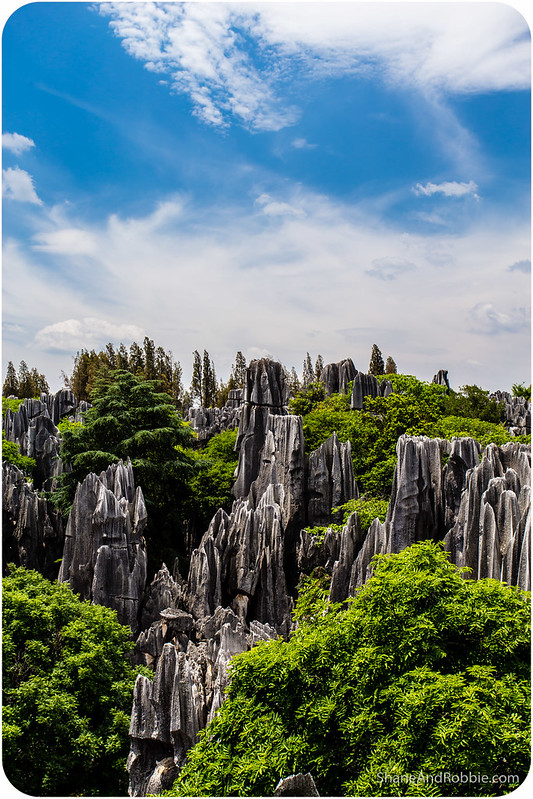 The park is immense – there are countless lesser-taken paths that wind their way through the “trees” and away from the crowds. We ended up walking around through The Stone Forest for 3-4 hours before hunger and impending heat exhaustion* finally called us back to civilisation.
*It was pretty hot in amongst all that stone, with the midday sun beating down on us. 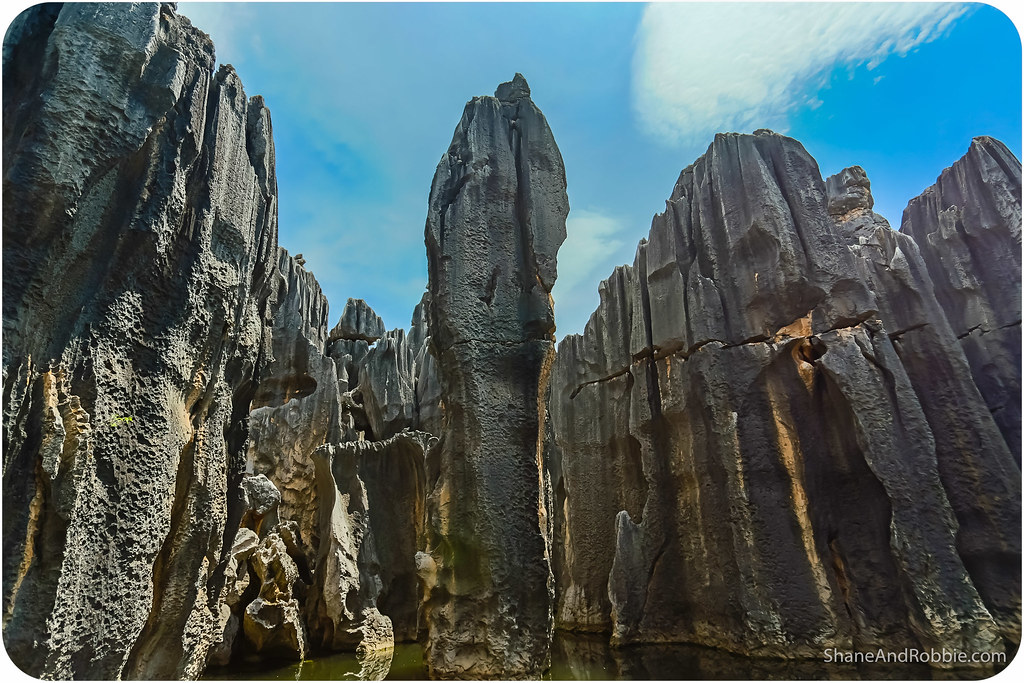 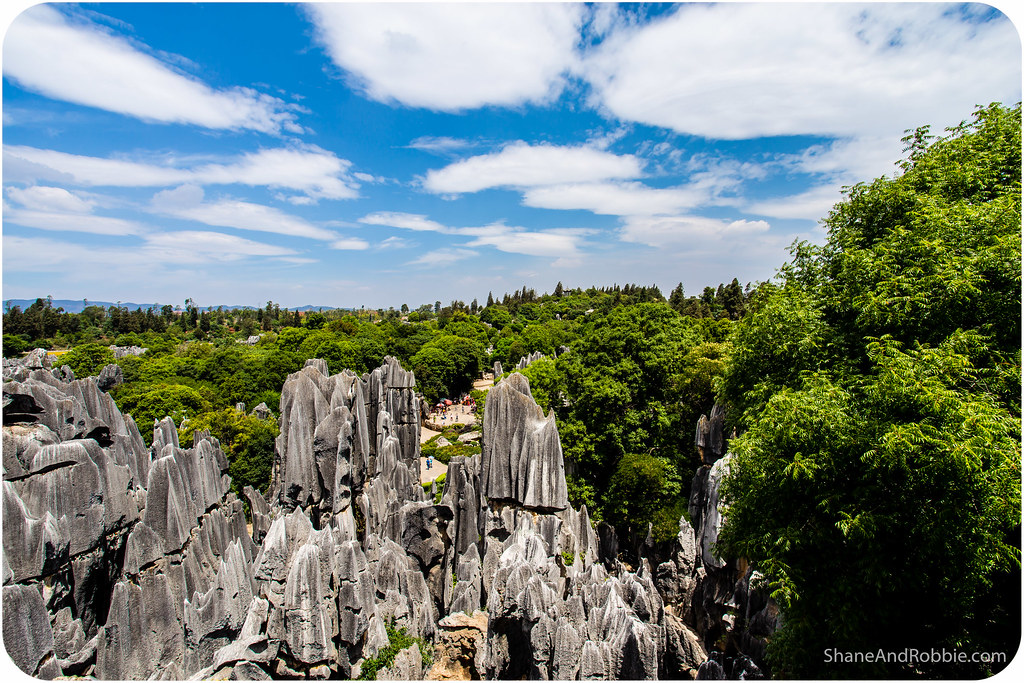 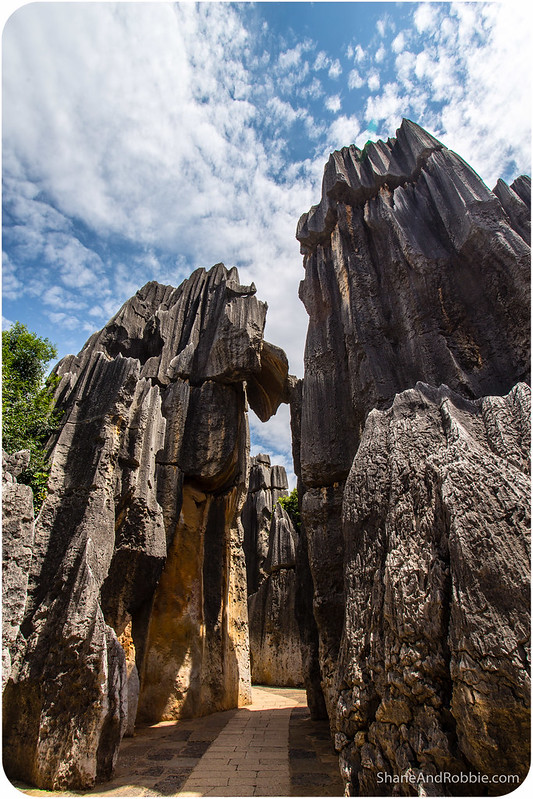 Lucky for us cold drinks and more delicious food was not far away. We enjoyed a great meal of stir fried greens, roast duck, the local speciality of cured donkey meat, and, of course, rice. The food here is fantastic – we’re going to tip the scales at 100kg each if we keep eating the we have been though! As “honoured guests” everywhere we go (i.e. as “rich tourists” who’ve paid a lot more money for food than the locals would ever pay), it seems we can never just have a simple meal or eat just 1 dish. Luckily we love Chinese food in general, and exploring the variations in cuisines between regions is great. Shane is also particularly taken with the local brew, Lijiang Beer, which seems to only come in monumental 750mL bottles. Poor man had to finish a whole bottle by himself over lunch today! Suffice to say he snored gently and contentedly all the way back to Kunming. 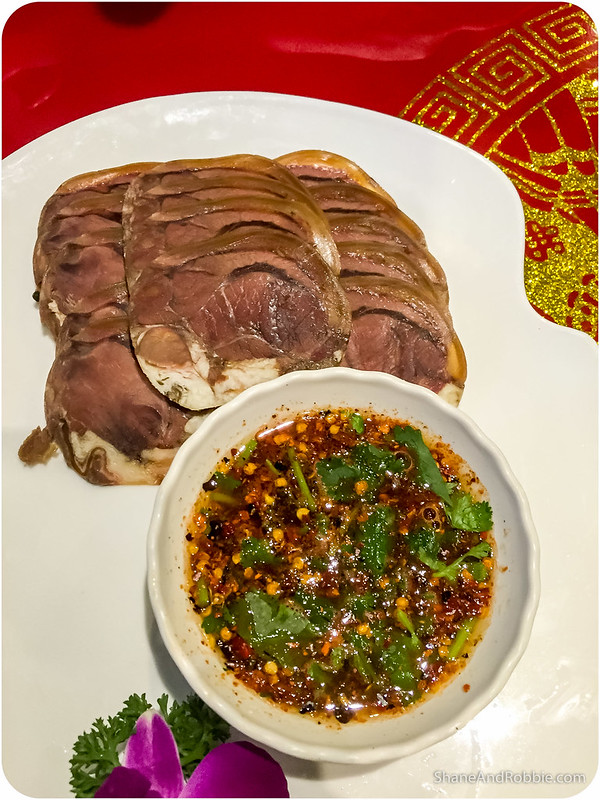 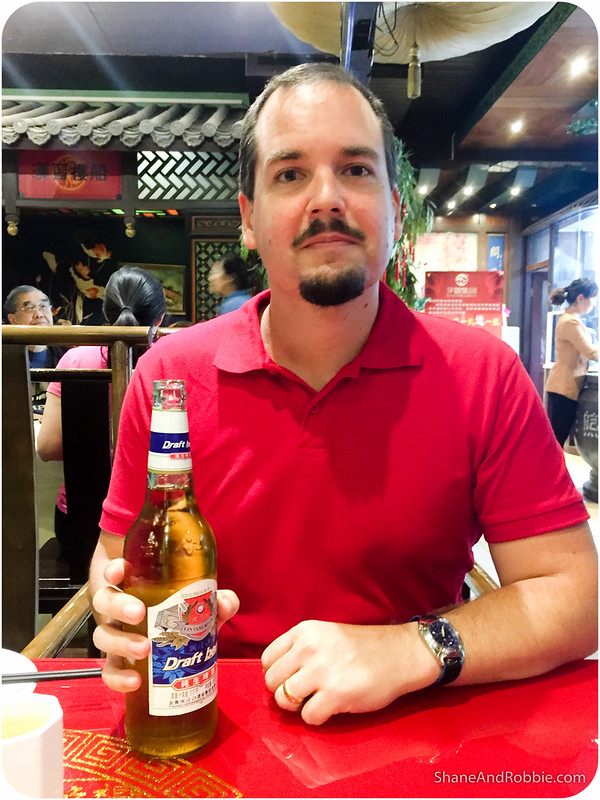 On the 2 hour drive back to Kunming, as Shane snoozed away on his side of the car, I entertained myself by taking in the scenery. It’s quite dry here, especially compared to the hot humid sub-tropical regions of Guangxi and Hong Kong we’ve just visited. The soil is bright red due to the high iron oxide content and in many ways reminds us of Aus. They even have eucalyptus trees here – acres and acres of them have been planted as they thrive in local conditions and are being used to produce eucalyptus oil for sale to the international market. It’s kind of amusing to think that, due to cheaper production costs, Aussies could be buying eucalyptus oil made in China! The eucalypts are one of the only crops that thrives here – the rugged terrain provides little arable land and historically Yunnan was always a very poor province, far behind its eastern counterparts in terms of agriculture, infrastructure and development. 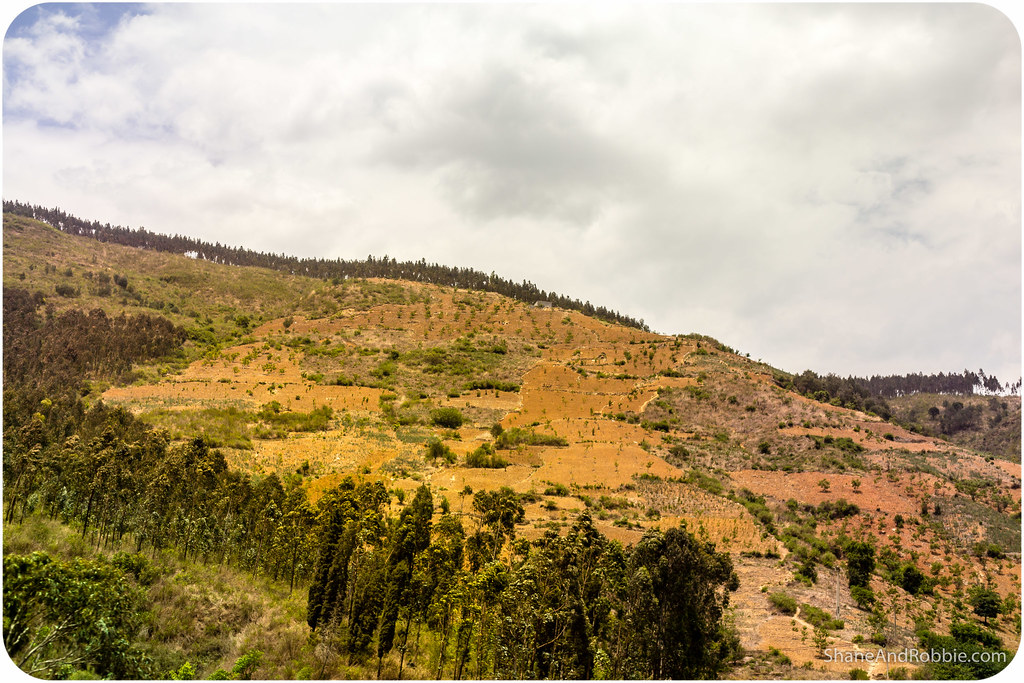 The regions most profitable export comes from its mines. Like Aus, Yunnan is also rich in mineral wealth; the region’s reserves of aluminium, copper, nickel, lead, zinc and tin are the largest in China. The biggest difference between Yunnan and Australia, however, is the altitude. Aus is about as flat as you can get, with our highest mountain being just 2,228m. Yunnan, on the other hand is extremely mountainous – there are more than 30 different mountain ranges across the region. The province has an average elevation is 1,980m; there are mountains here in the north-west, near the border with Tibet, than are more than 6,700m high. We’ve never seen mountains that high and the thought of such monumental peaks is rather daunting! 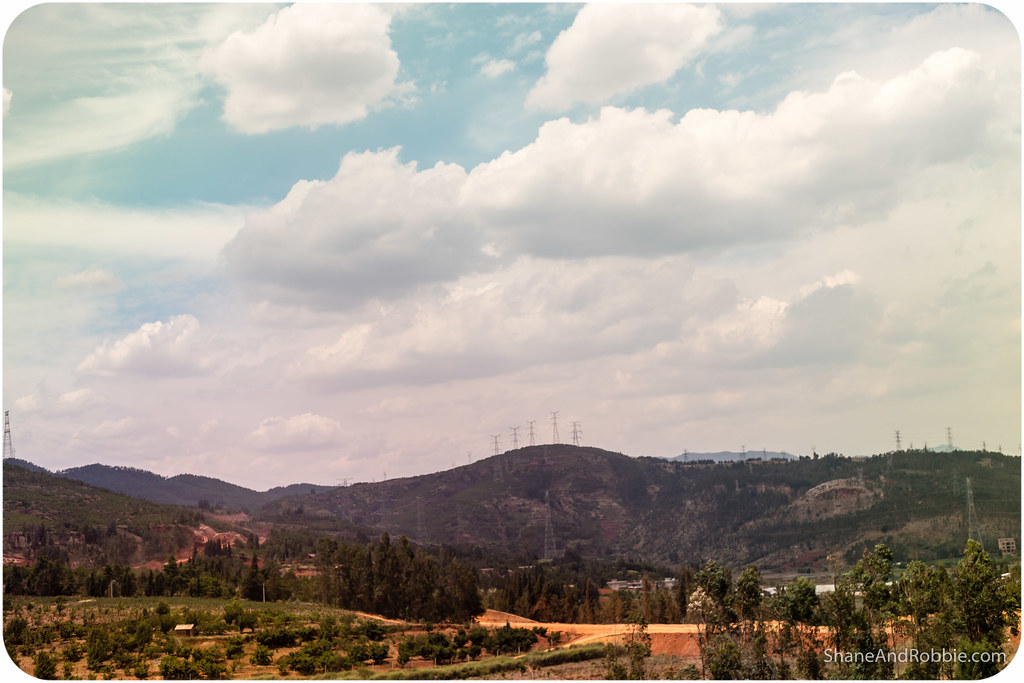 Yunnan is not on the “must see” list for many tourists – until just a few years ago this was considered a remote provincial backwater. Its wealth of natural wonders, mild climate, and cultural diversity have started to gain recognition, however, and tourism is growing. Additionally, given the region’s proximity to south-east Asia (the province borders Vietnam, Laos and Burma), the province has recently gained comparative advantages in regional and border trade with south-east Asia. Our local guide here in Yunnan has been telling us a lot about the investment in infrastructure that is happening here to help connect China to its neighbours more effectively (e.g. railway lines being built into Vietnam; major highways being built to connect Kunming to Laos, Cambodia, Burma, Thailand, Vietnam and even northern India; and even an oil pipeline being built from port cities in Burma to Kunming so oil can be pumped here and doesn’t have to shipped through the South China Sea). The scale of development is almost incomprehensible and bodes well for Kunming and Yunnan economically. We wonder, though, how much the region will change as it prospers and grows. For now though we just feel really privileged to be here and be able to enjoy the unique sights this part of China has to offer. 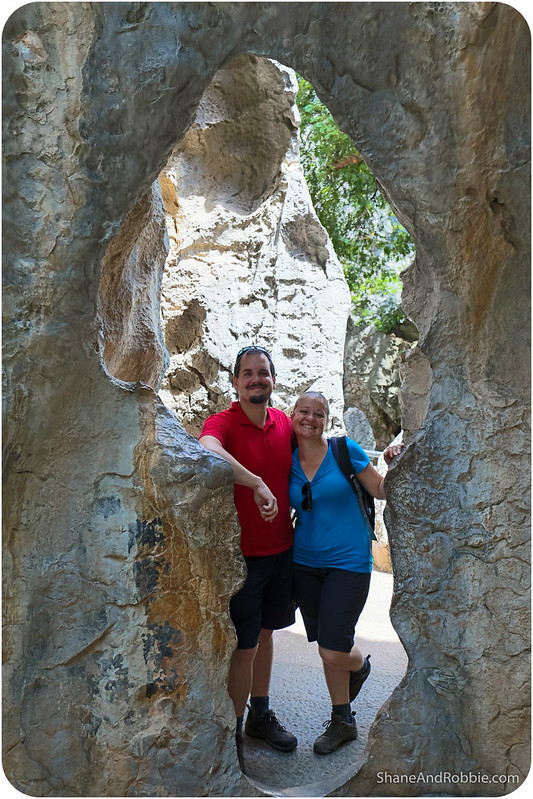