DALI TO LIJIANG: MOVING UP IN THE WORLD
Leaving delightful Dali behind today we made our way north to Lijiang, a relatively small city (population just 1.2 million) in the far north of Yunnan province. Close to Tibet, Lijiang is up in the mountains (elevation about 2,400m) and our home base for the next few days as we explore some of this area’s natural beauty. We started this afternoon with an exploration of the old town, however, with day trips to Jade Dragon Snow Mountain and Tiger Leaping Gorge planned for the next couple of days. 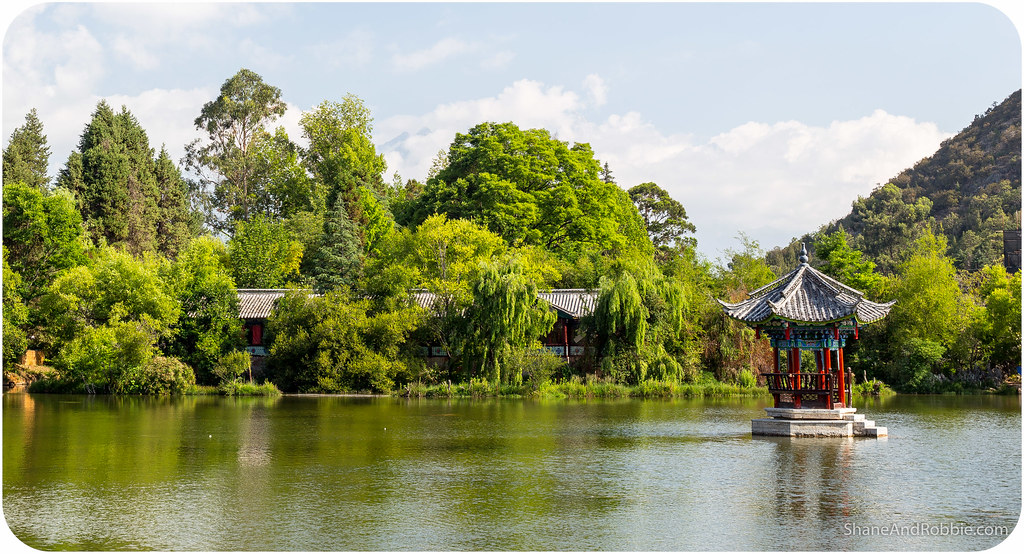 We left Dali this morning and drove 200km north to Lijiang, following the west coast of Lake Erhai and then continuing north into the mountains. Throughout the drive from Dali to Lijiang, we were struck by the amazing views – the mountains loomed large all around us and small villages whizzed by. The landscapes in this part of the world really are phenomenal. 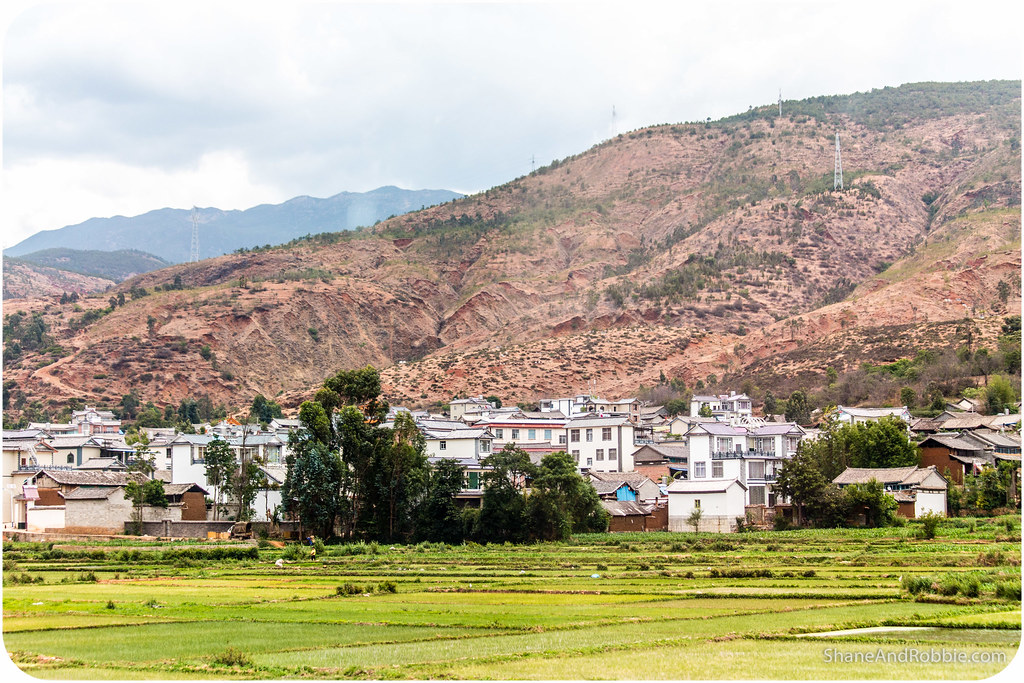 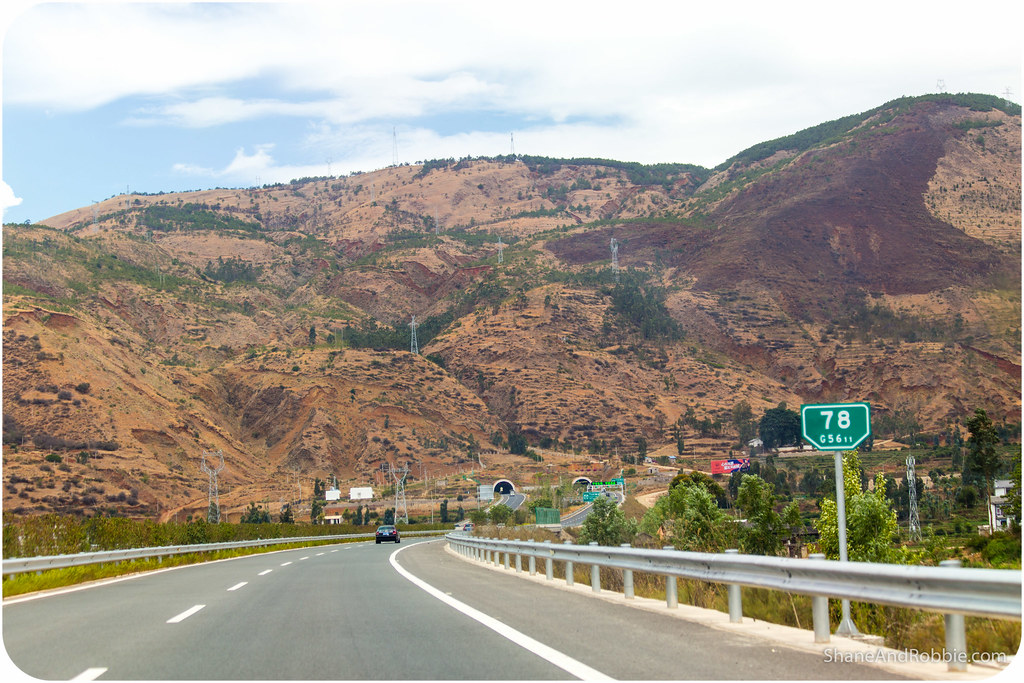 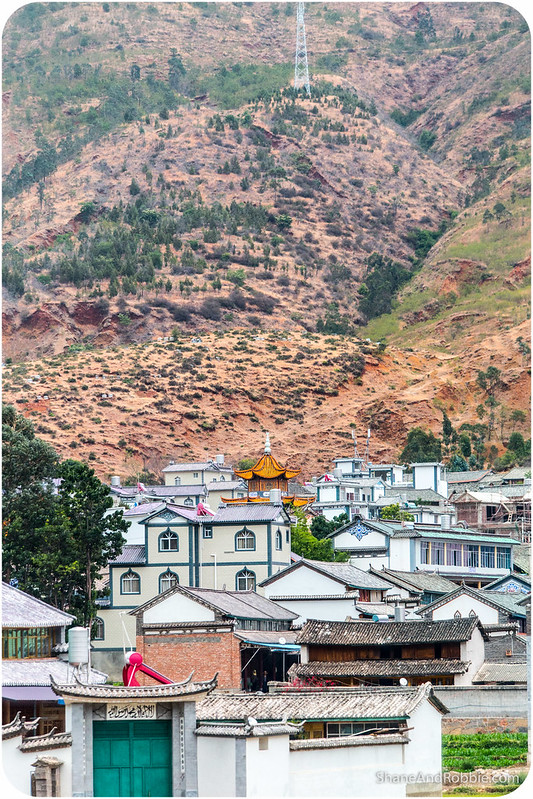 We arrived in Lijiang in time for lunch and then headed out for an afternoon of exploring on our own*, starting first and foremost with this city’s most famous photo-stop: Black Dragon Pool and Jade Spring Park.
*One of the joys of planning out our own itinerary and having private guides in each province is we have been able to pencil in some independent travel time. Having guides is great, but it’s also great being able to lose ourselves in laneways of these old towns – especially when they’re as small and navigable as Dali and Lijiang.

Jade Spring Park is a public green space surrounding the natural spring that once supplied Lijiang with clean, fresh drinking water. Now that water is “on tap”, waters from the spring collect in a pretty lake given the descriptive moniker of Black Dragon Pool. The park is used recreationally by locals and for photos of Jade Dragon Snow Mountain by tourists. 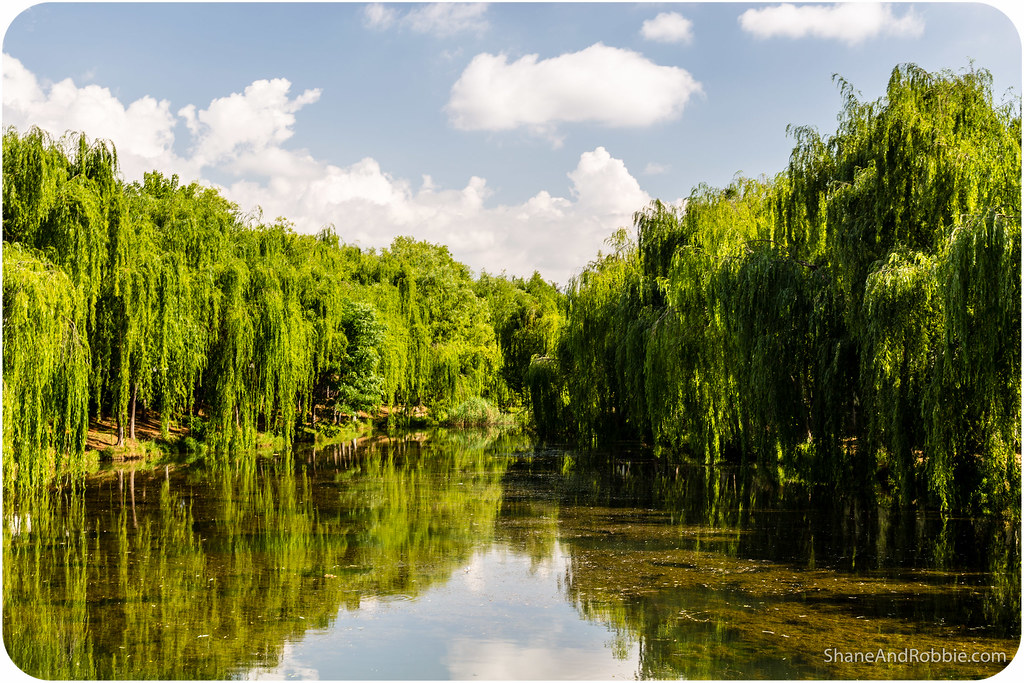 Jade Dragon Snow Mountain is a towering peak of 5,596m that dominates the landscape here in Lijiang. It is about 25km north of the city and, on clear days, its reflection is perfectly mirrored in Black Dragon Pool. Unfortunately the mountain was clouded over today so we only got to see part of it. Still, it was interesting to stroll through Jade Spring Park and see older residents doing Tai Chi, sitting on park benches chatting, and enjoying the shade of the trees. There was even an area of the park where a whole lot of elderly men were sitting around playing mahjong with their caged pet birds hung up in the boughs all around them. 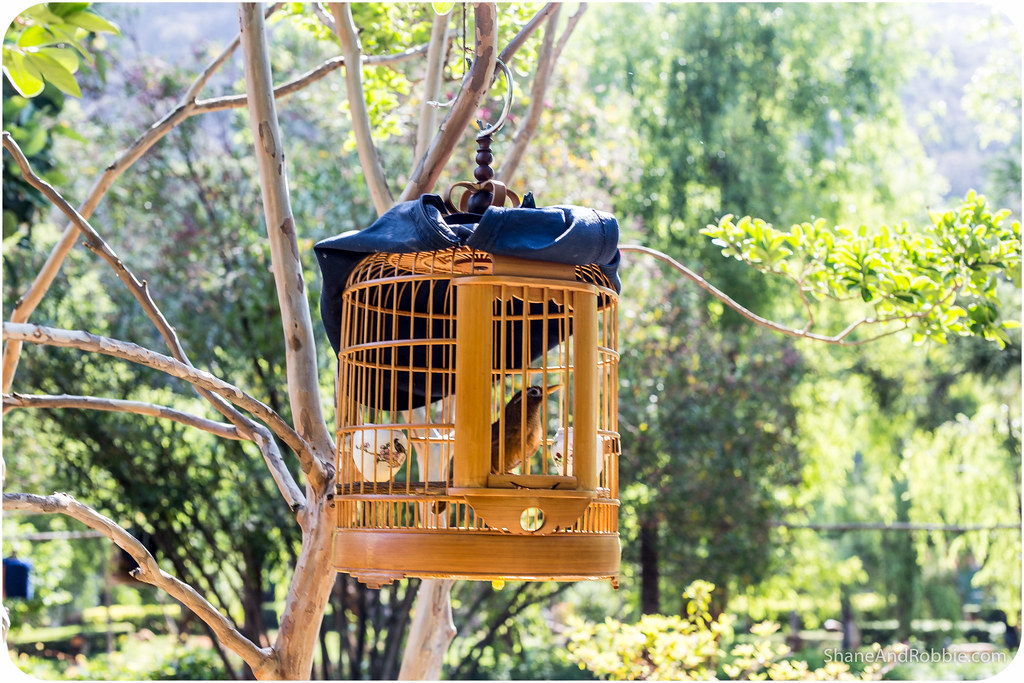 From Jade Spring Park we made our way south through Lijiang’s old town, which has a history going back more than 1,000 years. As ancient as the buildings looked though, we knew they were all only a few years old, having been rebuilt after a large earthquake in 1996. The reconstruction efforts were exceptional however – the “new” old town is beautiful and retains the unique architectural style of Lijiang’s native Naxi people. 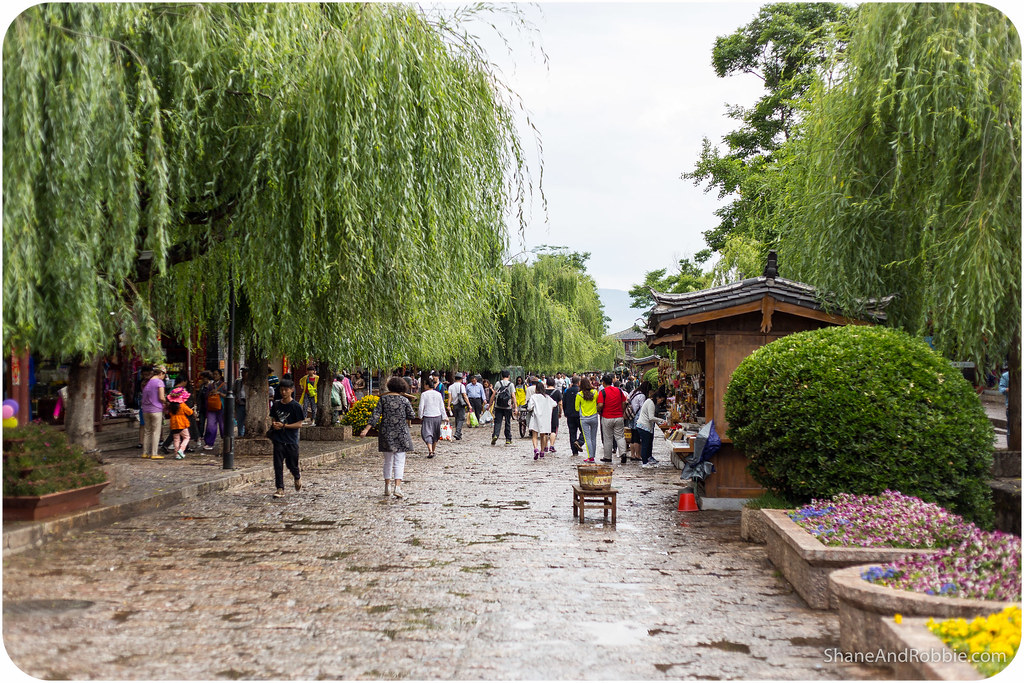 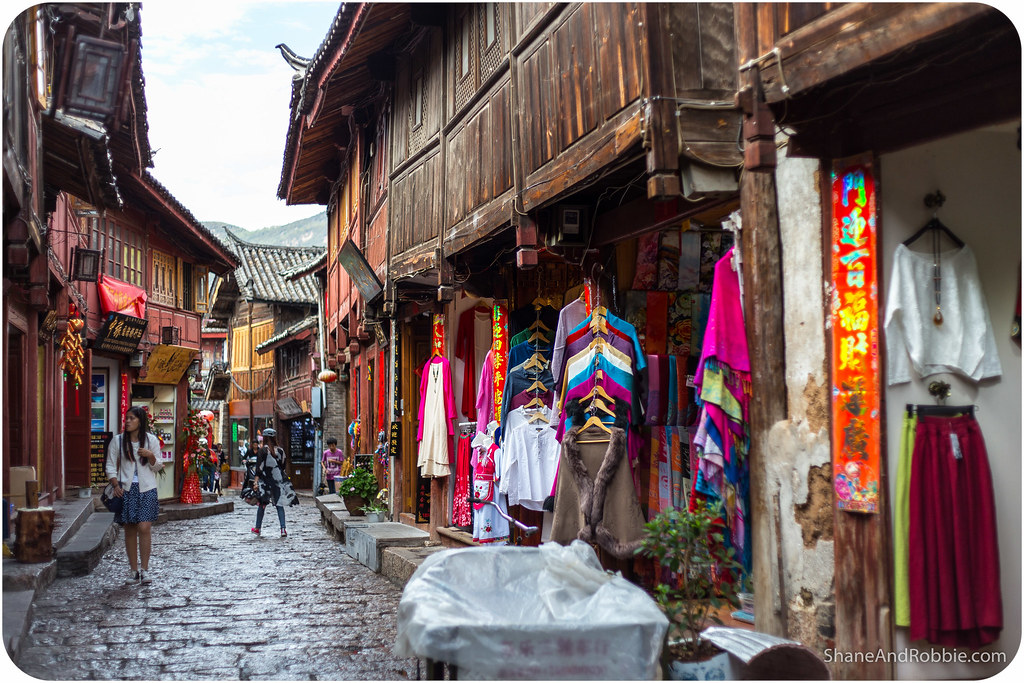 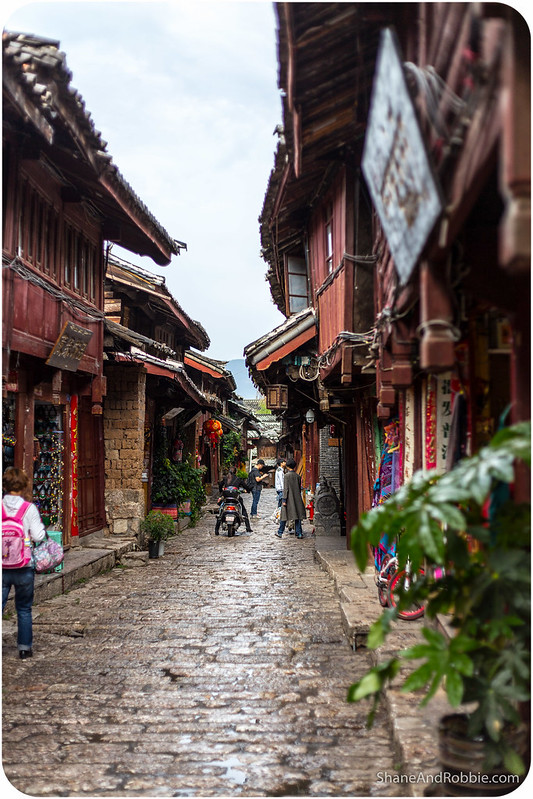 Lijiang is the best preserved Naxi town in China; the old town’s 2 storey houses with their wooden frames and intricately carved wooden window panels are characteristic of Naxi houses. Most of the houses in the old town are shops today, most selling the usual array of touristy crap. As we walked through the old town we came across a few shops, though, that sold genuine hand-made Naxi crafts – including silver jewellery, embroided clothing, and carved wooden ornaments. 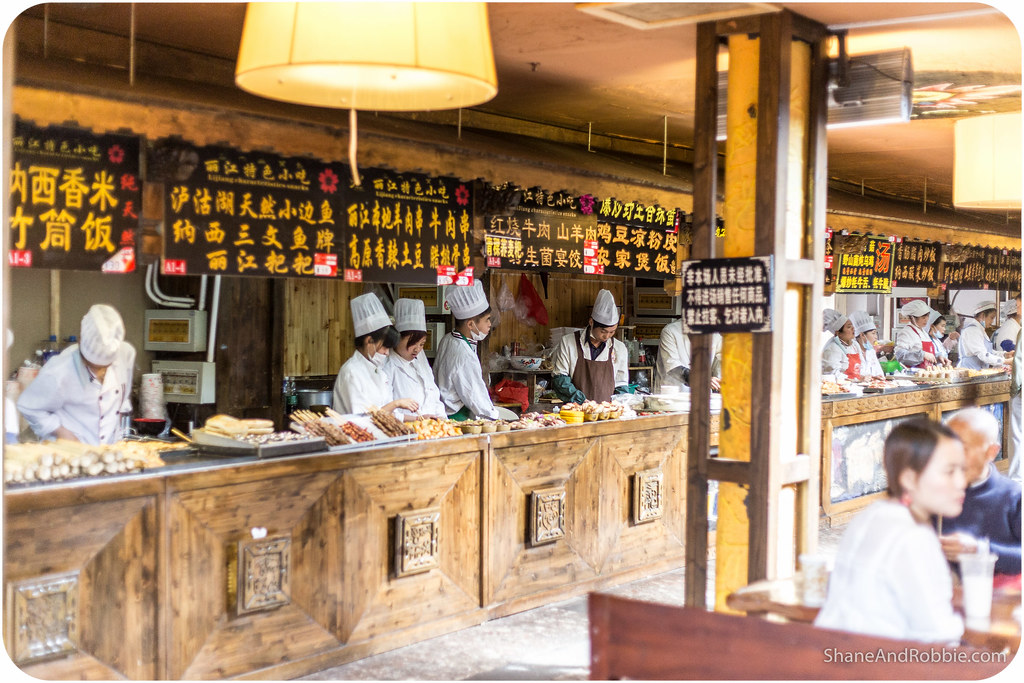 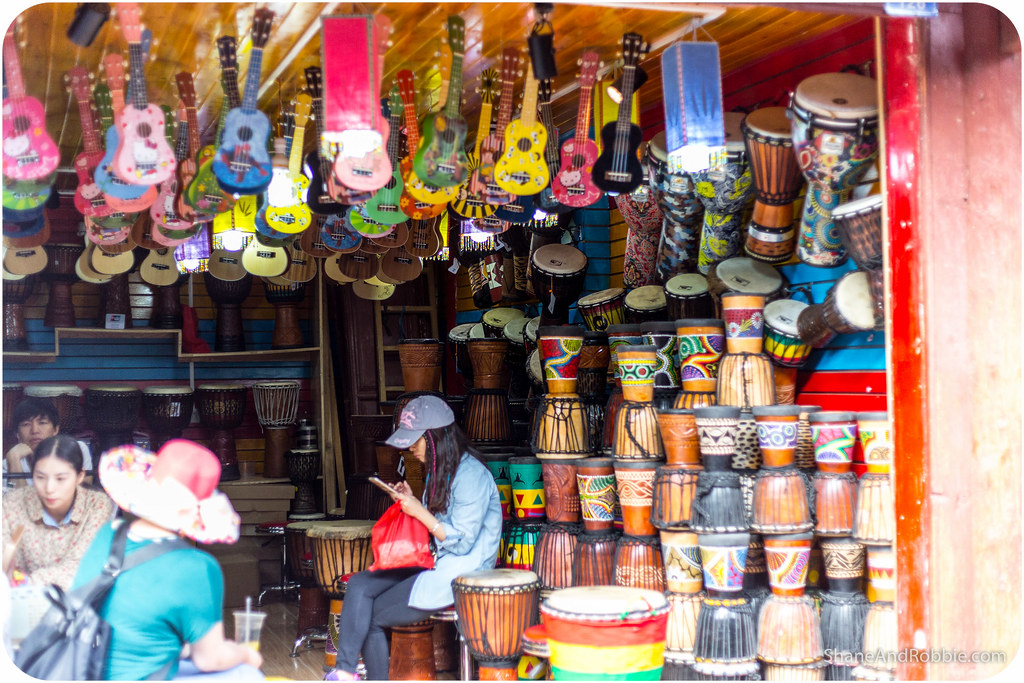 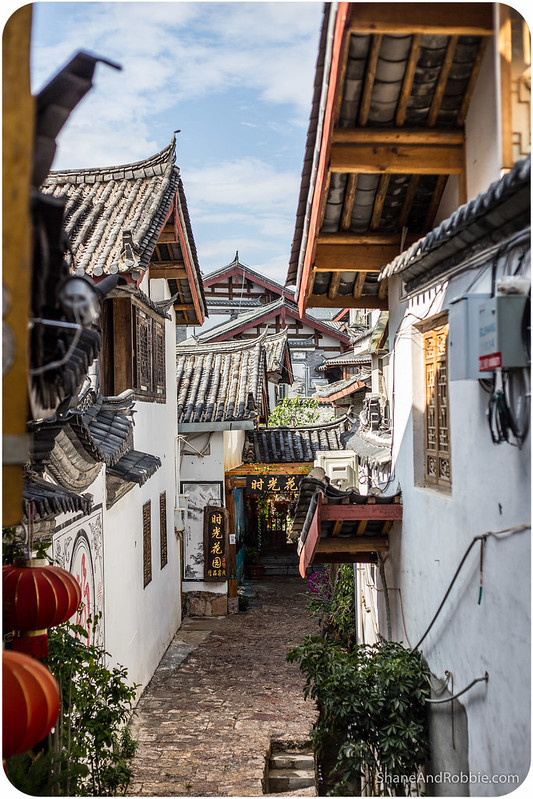 The Naxi are another of China’s 56 ethnic groups. Numbering just a few hundred thousand souls, they inhabit the foothills of the Himalayas in this northwestern part of Yunnan province. Their distinctive culture is still in evidence here in Lijiang, with older women wearing their customary garb, traditional Naxi music resounding from shopfronts, and examples of their unique pictographic writing style used in some areas. 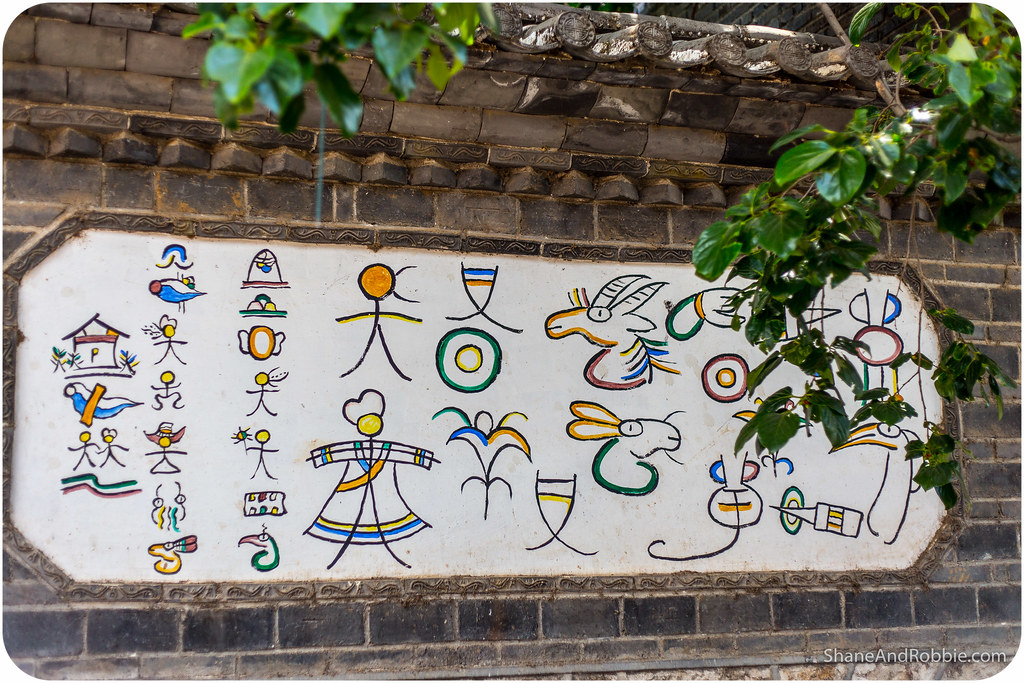 The Naxi, along with the Bai from around Dali, were always relatively wealthy due to their trade along the Tea Horse Road. The ancient Tea Horse Road was a network of caravan paths winding through the mountains of Yunnan, across into Tibet and then down into Nepal, India, and Burma (see map below from http://www.chinaexpat.com). The route earned the name “Tea Horse Road” because of the common trade of Tibetan ponies for Chinese tea, a practice dating back 1,000 years. It is believed that it was through this trading network that tea first spread across Asia from Yunnan. In addition to tea, the Naxi caravans carried salt, silk, silver, tin and embroided cloths for trade. 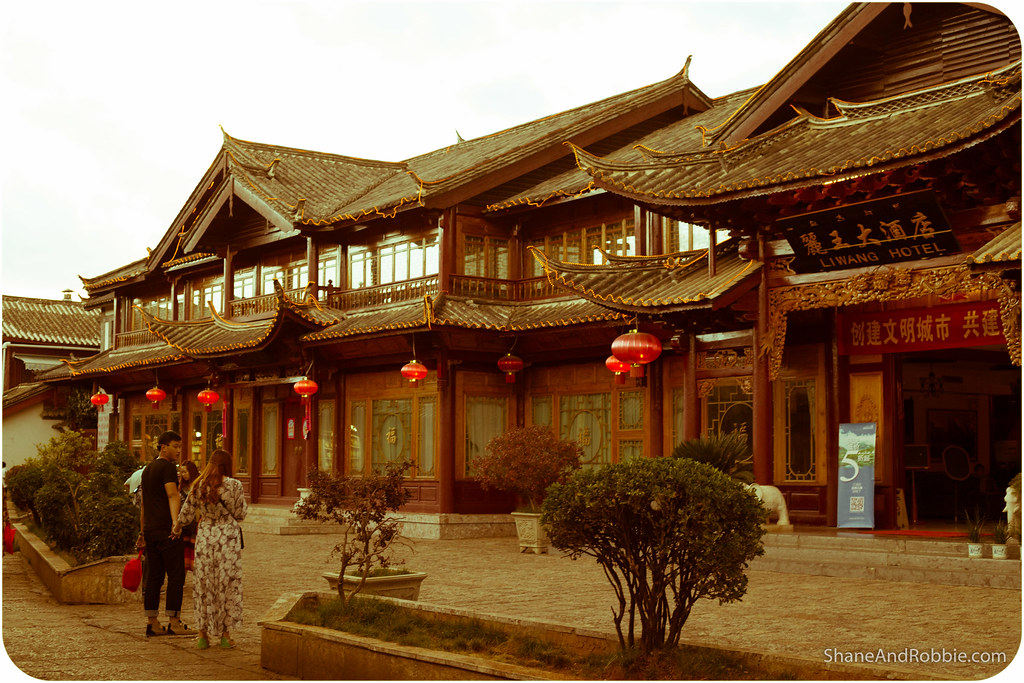 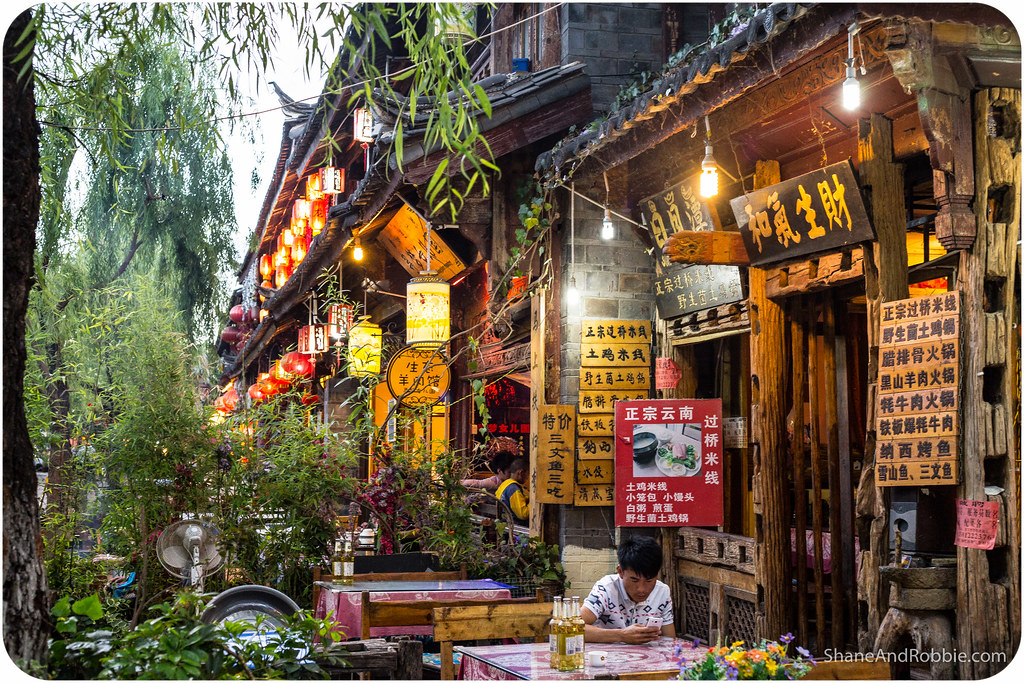 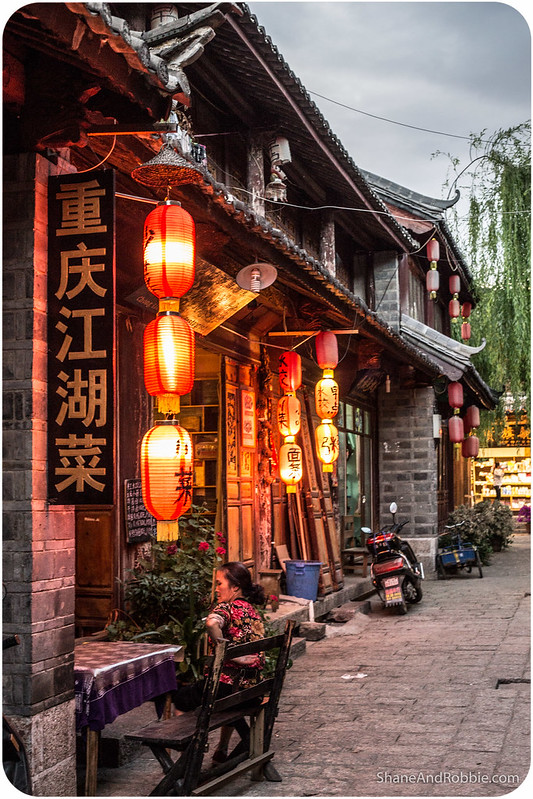 Even though the Tea Horse Road is no longer in use, the spirit of trade is alive and well in Lijiang’s old town. There were heaps of tourists (mostly Chinese) in the old town as we wandered through this afternoon, most of them happily buying trinkets, cloths, herbal remedies, and packets of famous Yunnan green tea. 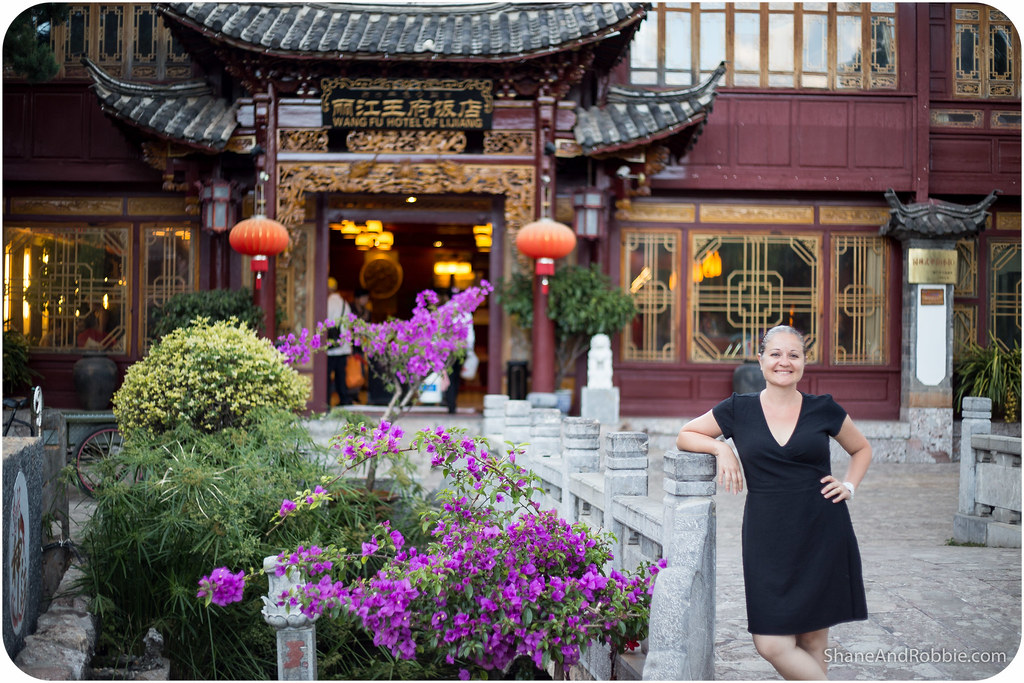 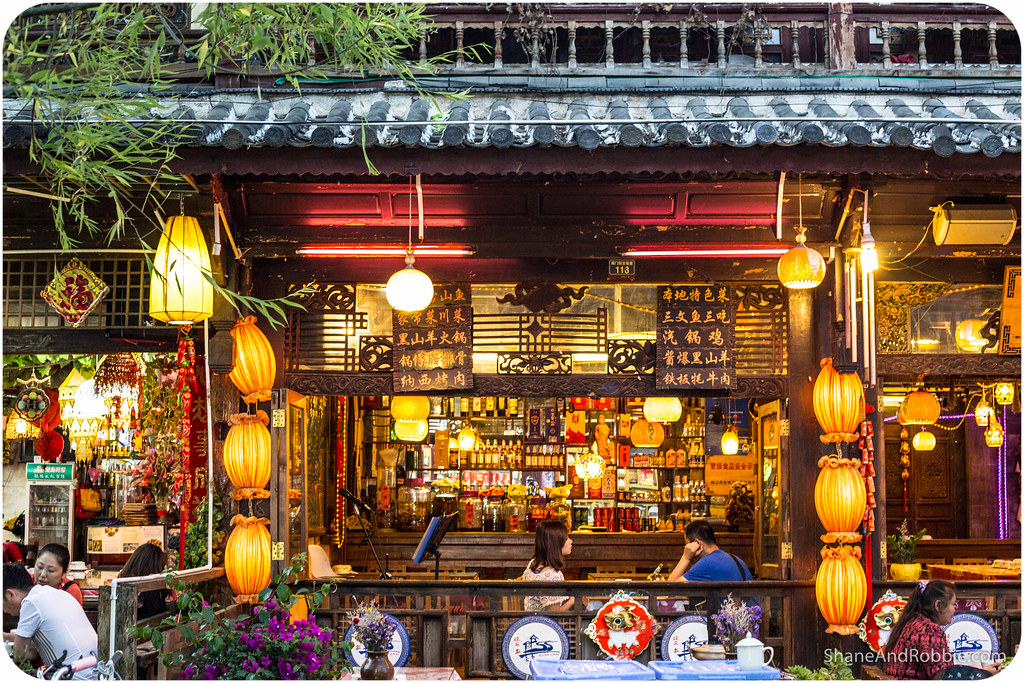 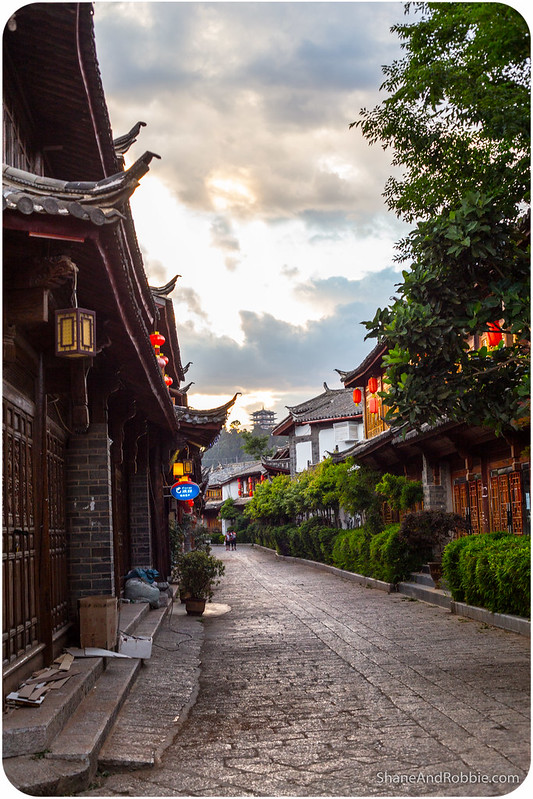 As the sun began to set we wandered back to our hotel for an early night – tomorrow we’re heading out of town to see more of the majestic Jade Dragon Snow Mountain and we’ll need all our strength and fortitude to get up to those altitudes! Tune in tomorrow to see how we coped with being 5.5km up! 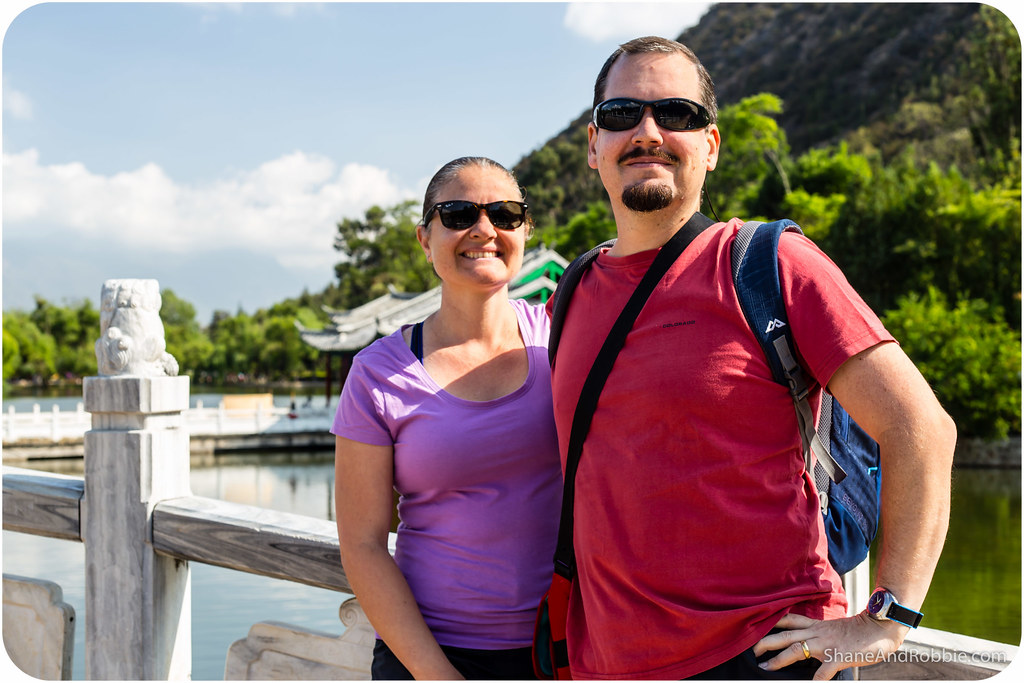