The city of London has been around for 2 millennia (at least); there is oodles and oodles of history soaked into the streets and the brickwork here, and today we went out to explore just a little bit of it. This is also a modern, global city; a leading financial, artistic, entertainment, fashion, and educational centre. Part of London’s appeal for us lies in this blend of old and new, and today we got to see a little of both sides of the city. 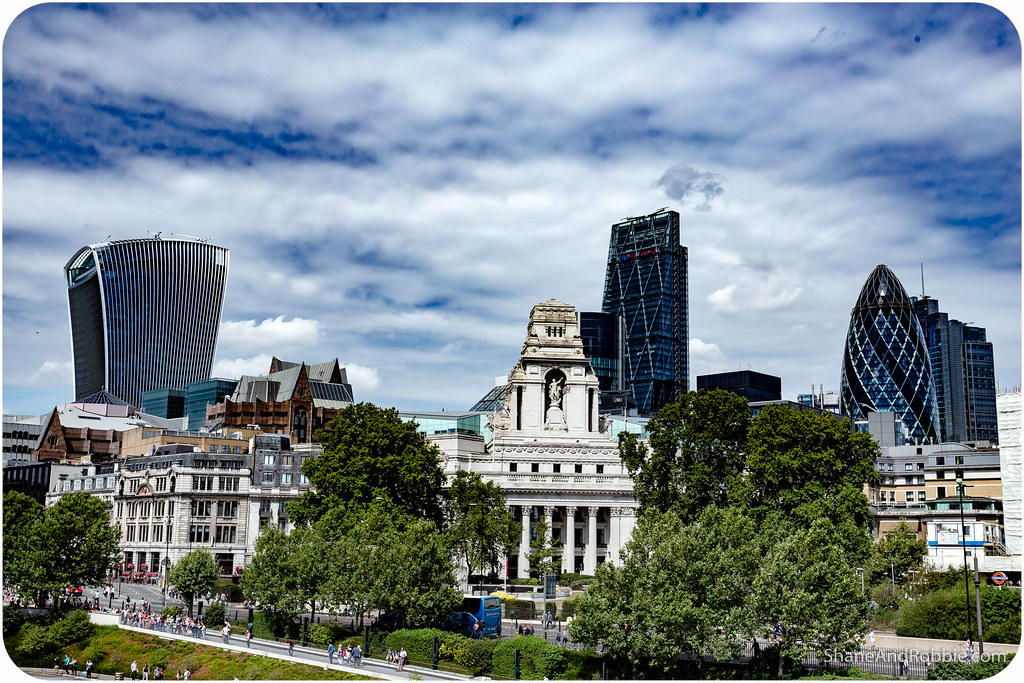 We caught the Tube into the CBD of London, with a plan to see the Tower of London, St Paul’s Cathedral, and the London Museum, as well as just stroll the streets and soak in the big city vibe. 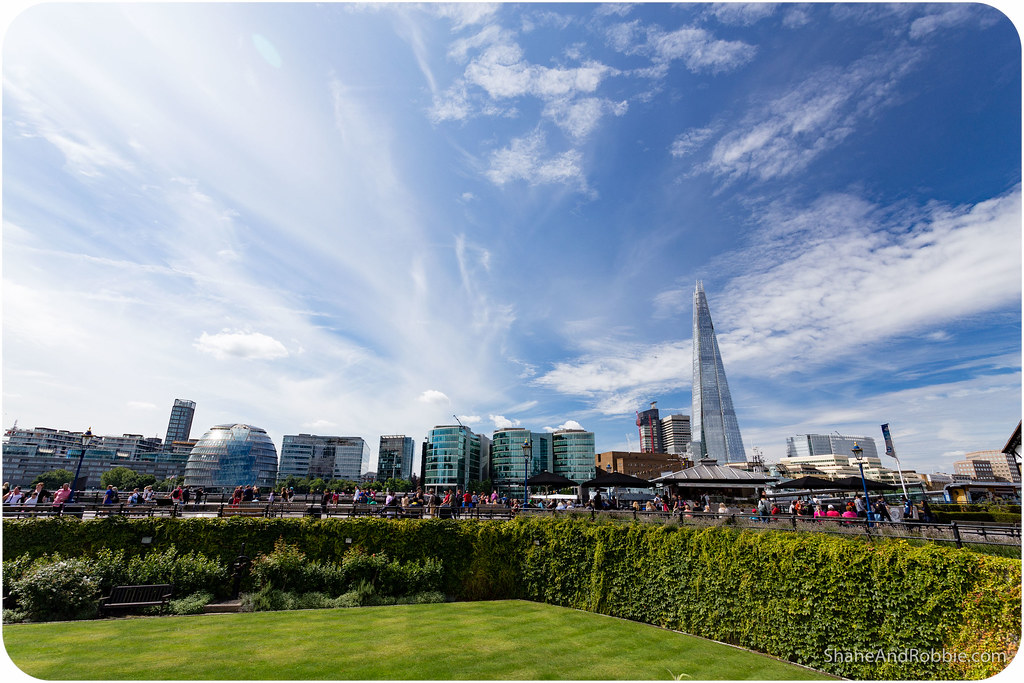 London’s CBD roughly corresponds to the original city limits delineated by the Romans in 50AD when they founded Londinium. The entire city once fit into these 3 square kilometres; today, however, it’s just the main business district. It’s in this square mile that London’s big banks, insurance companies, legal firms, and other multi-national businesses have their offices and headquarters. Some of the buildings in the city are iconic and instantly recognisable, others just plain impressive. Our favourite from today include:

• The Royal Exchange, founded in the 16th century by the merchant Thomas Gresham to act as a centre of commerce for the City of London.

• The Lloyd’s building, home of the insurance institution Lloyd’s of London and sometimes known as the Inside-Out Building because the services for the building, such as ducts and lifts, are located on the outside.

• 20 Fenchurch Street, a commercial skyscraper nicknamed “The Walkie-Talkie” because of its distinctive shape.

• 30 St Mary Axe (known as “The Gherkin”), built on the former site of the Baltic Exchange, which was extensively damaged in 1992 by the explosion of an IRA bomb.

• The Shard, an 87 storey sky scraper on the South bank of the Thames. 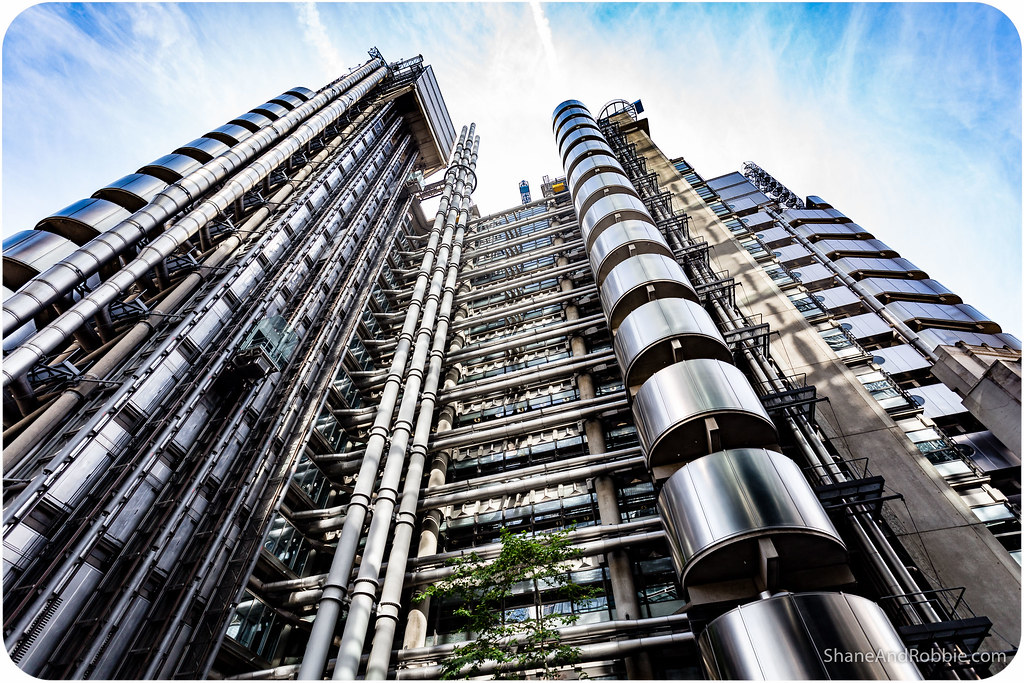 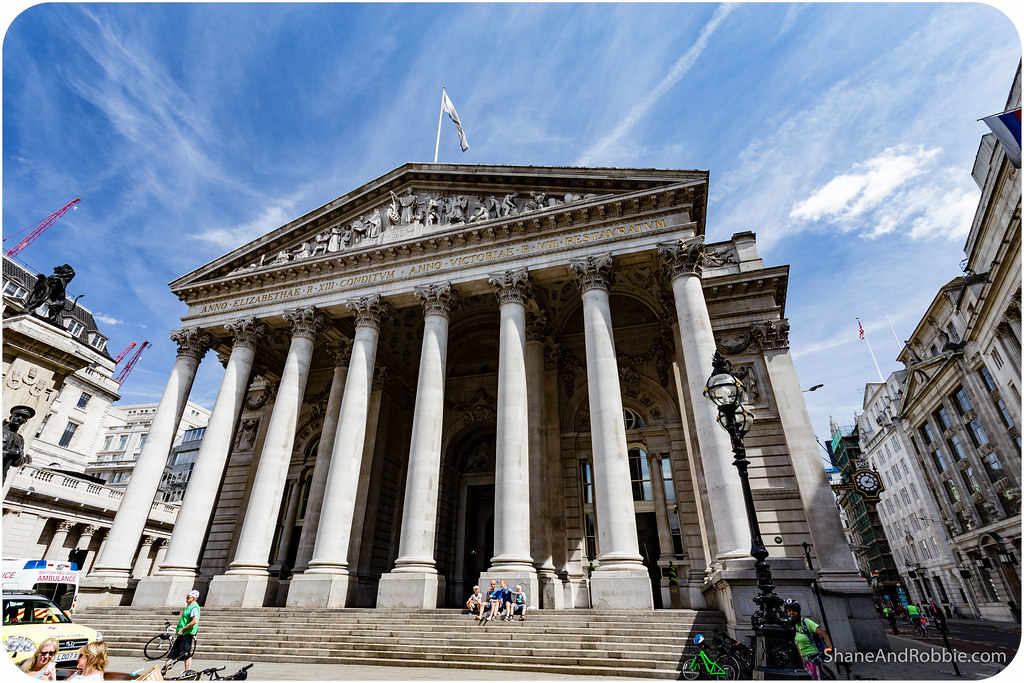 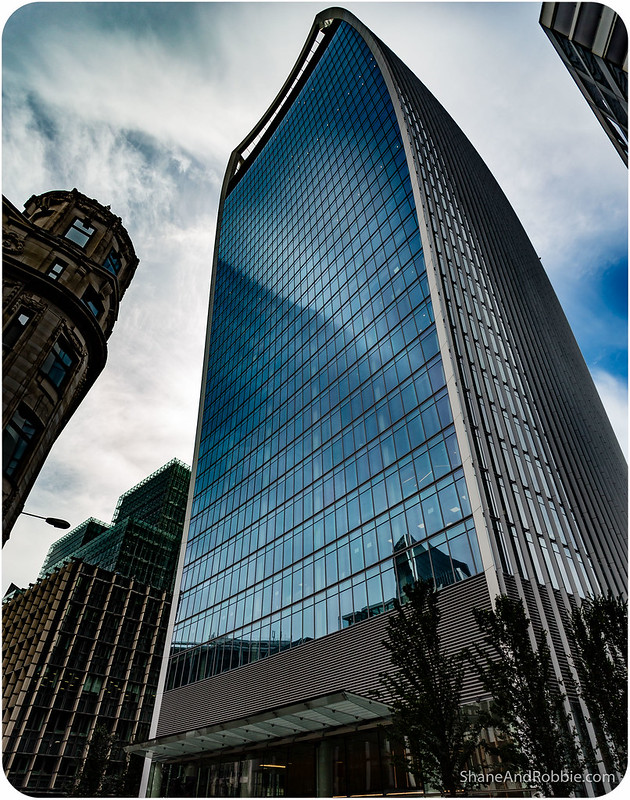 Our first “touristy” stop for the day was the London Museum, where the story of London itself is told through exhibits and AV displays. 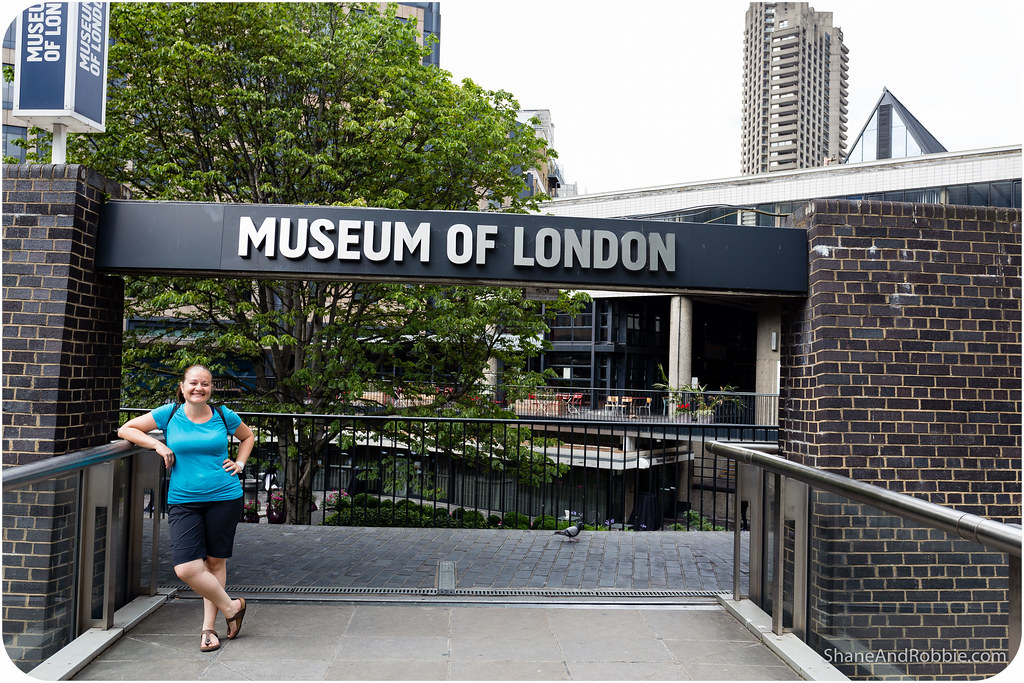 Here we learnt about the Roman settlement of Londinium, built at a strategic point along the River Thames where crossings could be made and where the river was deep enough to allow ships to sail in.

After the Romans came the Saxons, who ruled London as part of the Kingdom of Wessex and converted the city to Christianity. 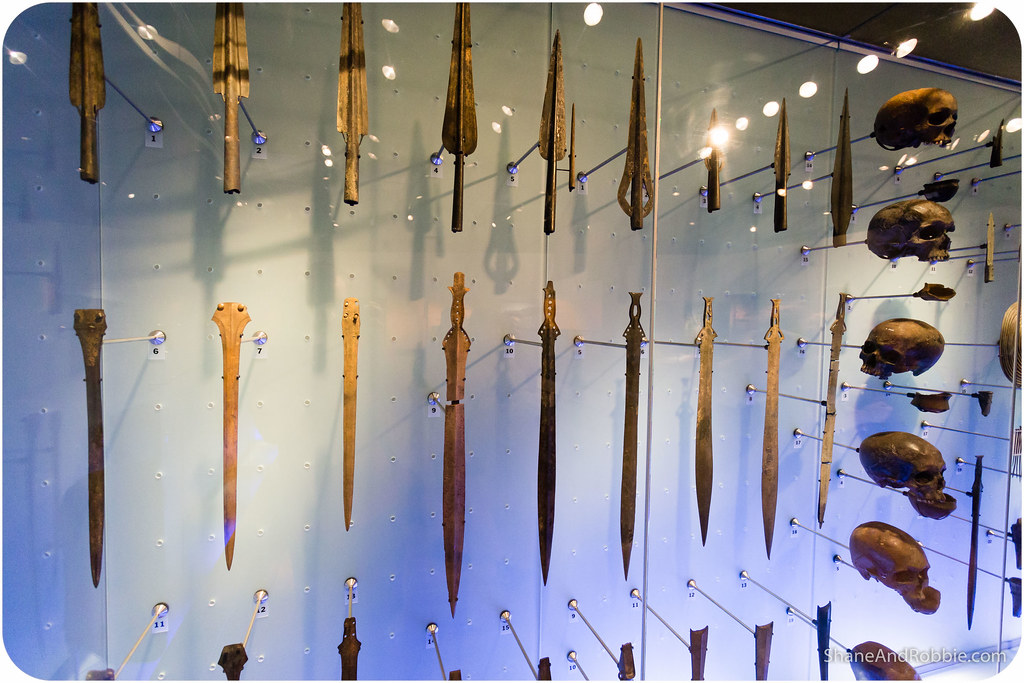 The Danish Vikings raided London a few times in the 9th century, but never gained a foothold this far south. In fact, London remained a Saxon city until the Norman invasion of the 11th century. It was the Normans who built the first stone castle in London (which still stands and forms the core of the Tower of London), and the first stone bridge across the River Thames (precursor to the current London Bridge or Tower Bridge). This bridge would last for 600 years, and remained the only structure across the River Thames until 1739.

The museum showed us how London grew during the Middle Ages, and how Medieval London was a maze of over-crowded, unsanitary, narrow and twisting streets, with buildings made from wood and straw (which made fire a constant threat). Sounds like a recipe for disaster right? How about a recipe for multiple disasters, in the shape of numerous outbreaks of the plague (including the “Great Plague” in 1665 which killed around 60,000 people, which was one fifth of the city’s population), and one very big fire. The Great Fire of London destroyed the entire city in 1666 and paved the way for it to be redesigned, rebuilt, and expanded.

The 18th and 19th centuries were a period of rapid growth for London, reflecting increased prosperity due to the Industrial Revolution, and London’s role at the centre of the evolving British Empire. During this period, London became a global political, financial, and trading capital.

While the city grew wealthy, 19th-century London was also a city of poverty, where millions lived in overcrowded and unsanitary slums (conditions immortalised by Charles Dickens in such novels as “Oliver Twist”).

Modern London was also brought to life for us at the museum, with photos of the damage done to the city during World Wars I and II by German bombing raids. London’s rebuilding was slow to begin, however, in 1951 the Festival of Britain was held, which marked the city’s return to form.

Starting in the mid-1960s, partly as a result of the success of such UK musicians as the Beatles and the Rolling Stones, London became a centre for pop culture and a trend-setting city (which is still is today). 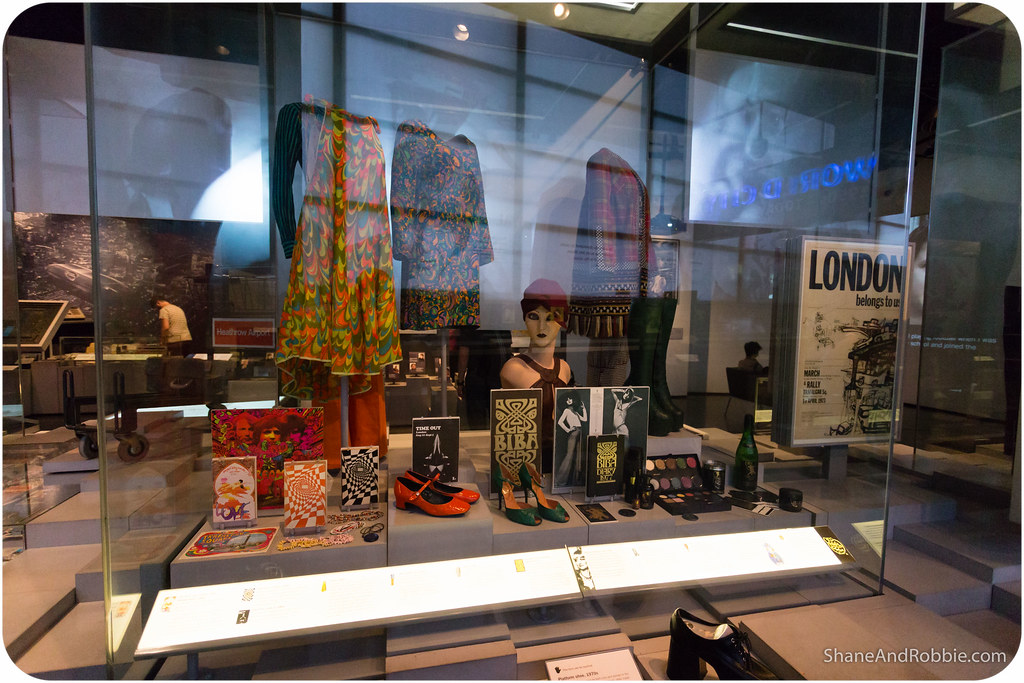 We also learnt that more than 300 languages are spoken in London’s streets. This multicultural city is home to more migrant groups than any other in the world. From the 1950s onwards London became home to a large number of immigrants, forever changing the face of the city. It’s something we can’t help but notice walking the streets of the city – this town is a melting pot of cultures, creeds, races, and peoples like nothing we’ve ever seen. It’s really cool and makes for some fascinating people watching! 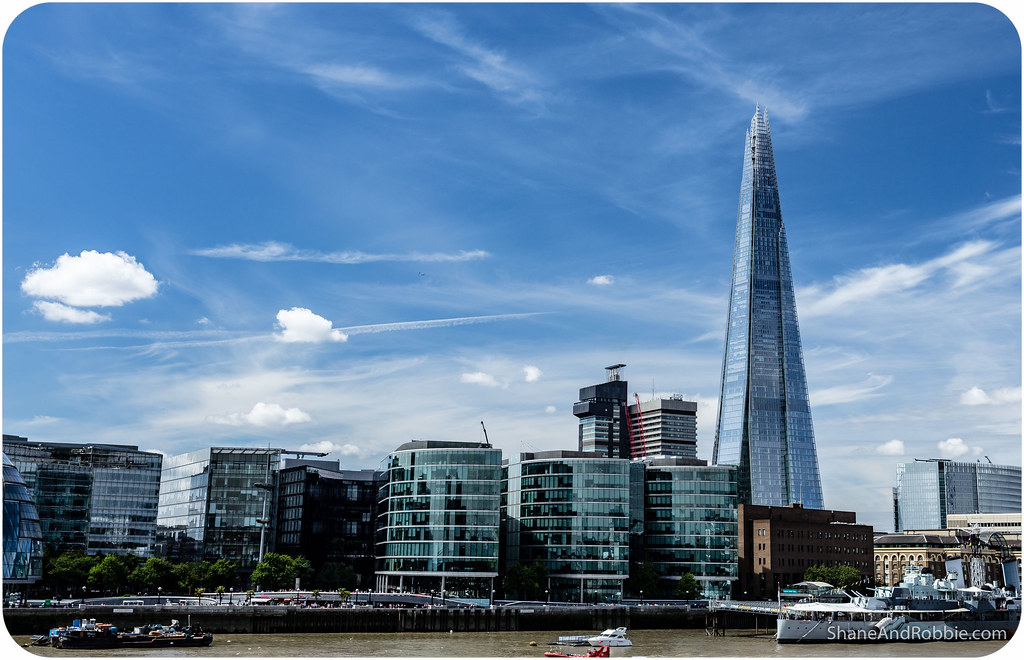 The Museum of London gave us a great overview of the city’s history and helped put some of the other sights we saw into context. It really is a great stop for anyone who’s visiting the city and wants to understand a bit more about the city’s history. 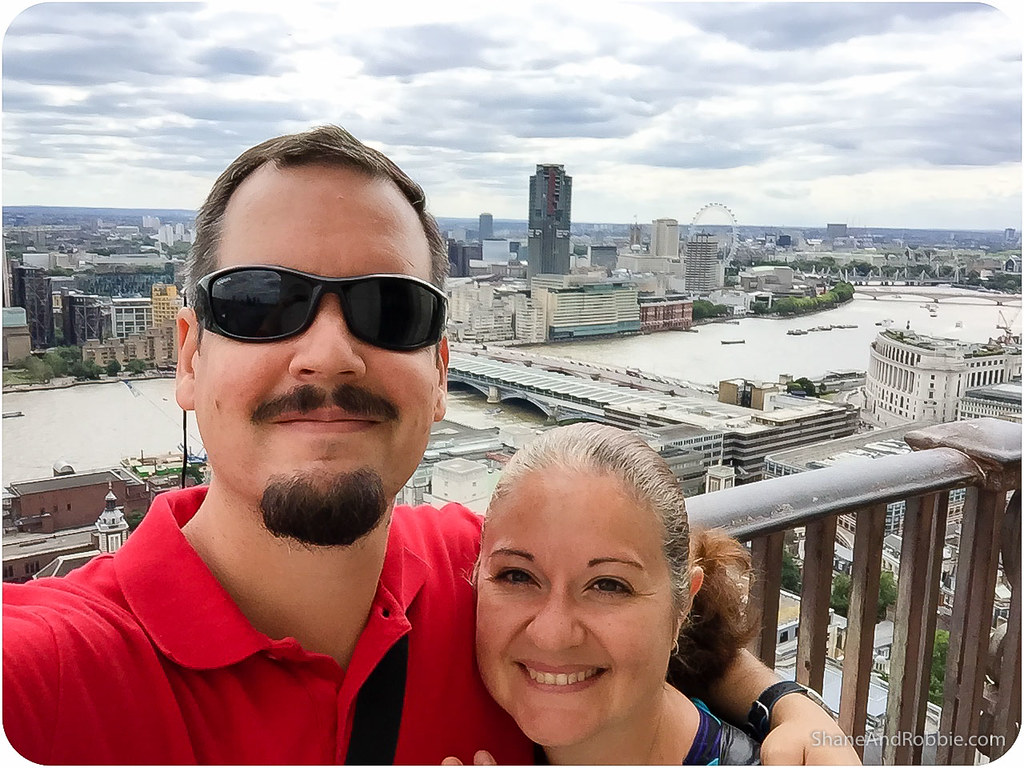 From the museum we walked across to London’s iconic cathedral: St Paul’s. Perched on Ludgate Hill, the highest point in the City of London, the church is magnificent. We couldn’t take photos of the interior, but trust us, this Baroque masterpiece if beautiful. 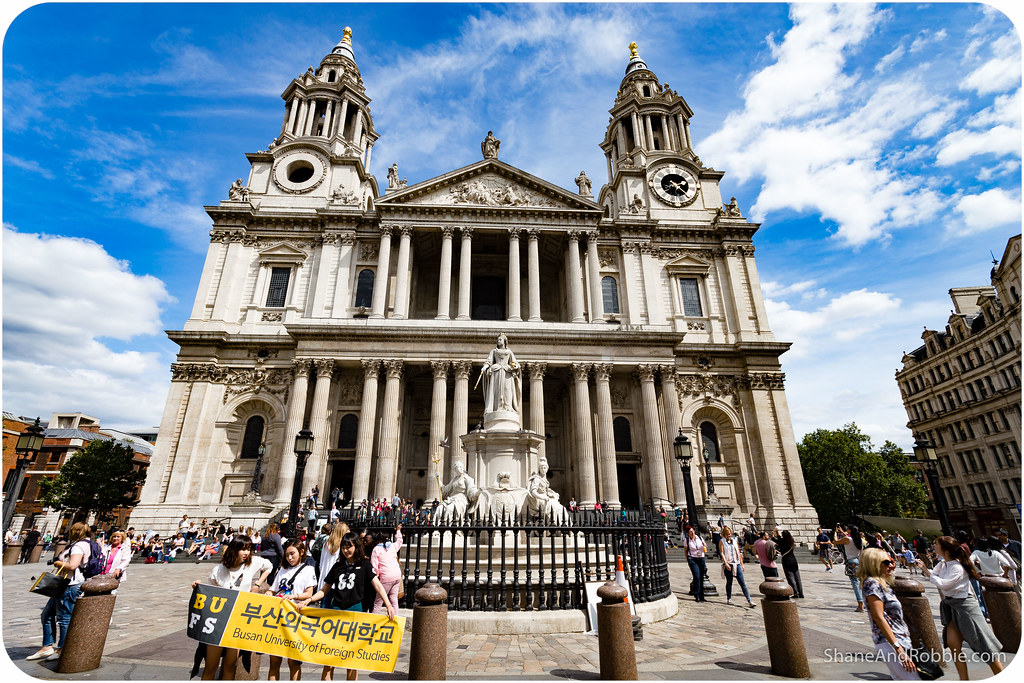 The current church was built in the 17th century, after the Great Fire of London destroyed the Gothic cathedral* that stop on the hill. Many important events in British history have been celebrated at St Paul’s (which is part of the reason it’s so iconic), including the funerals of Lord Nelson, the Duke of Wellington and Sir Winston Churchill; Jubilee celebrations for Queen Victoria; peace services marking the end of the First and Second World Wars; the wedding of Charles and Diana; and the thanksgiving services for the Golden Jubilee, the 80th Birthday and the Diamond Jubilee of Queen Elizabeth II.

*The Gothic cathedral itself replaced an earlier wooden structure – there has been a church on that spot since 604. 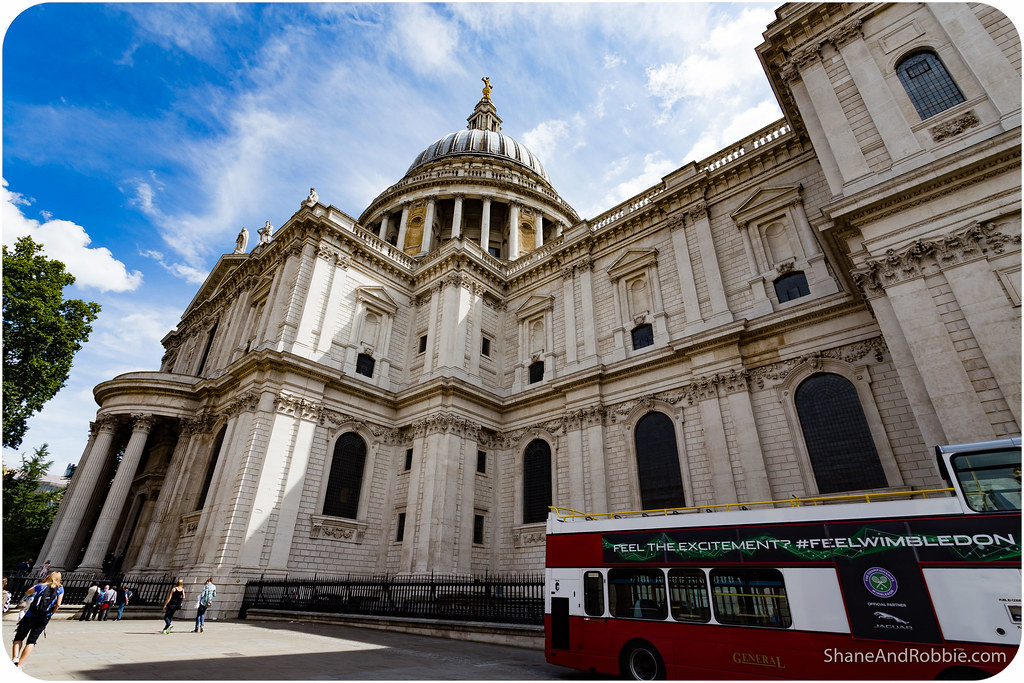 One of the best things about visiting St Paul’s is that you can climb all the way to the very top and enjoy some epic views across the city. It’s quite a climb, and a little nerve wracking if you don’t love heights, but the 360 degree views of London’s CBD make it all worth while. Didn’t hurt that we had a great summer’s day today! 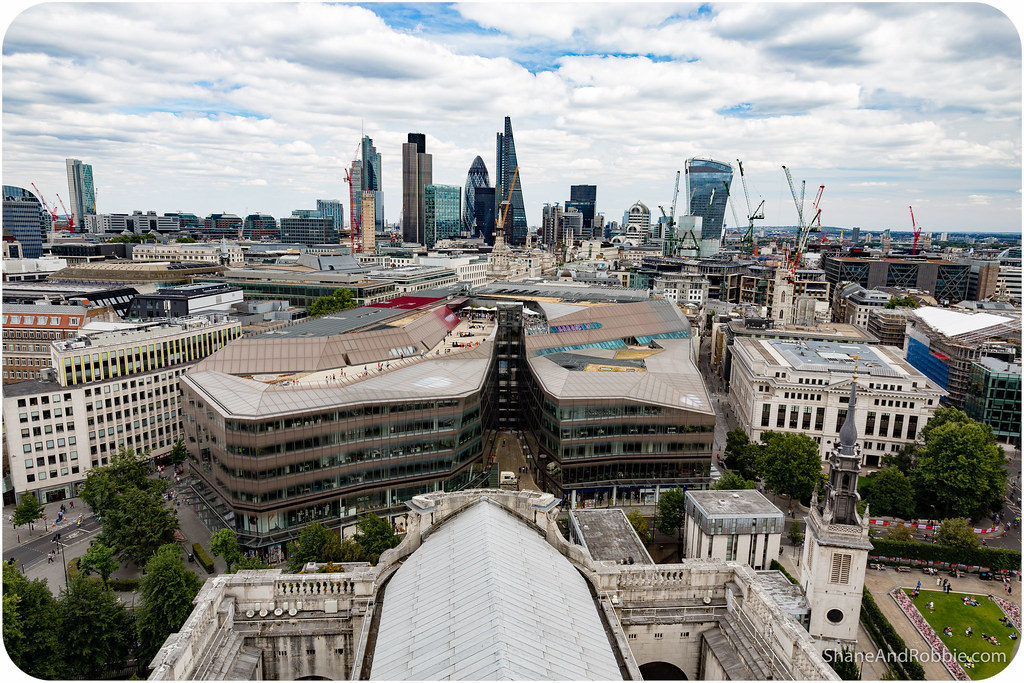 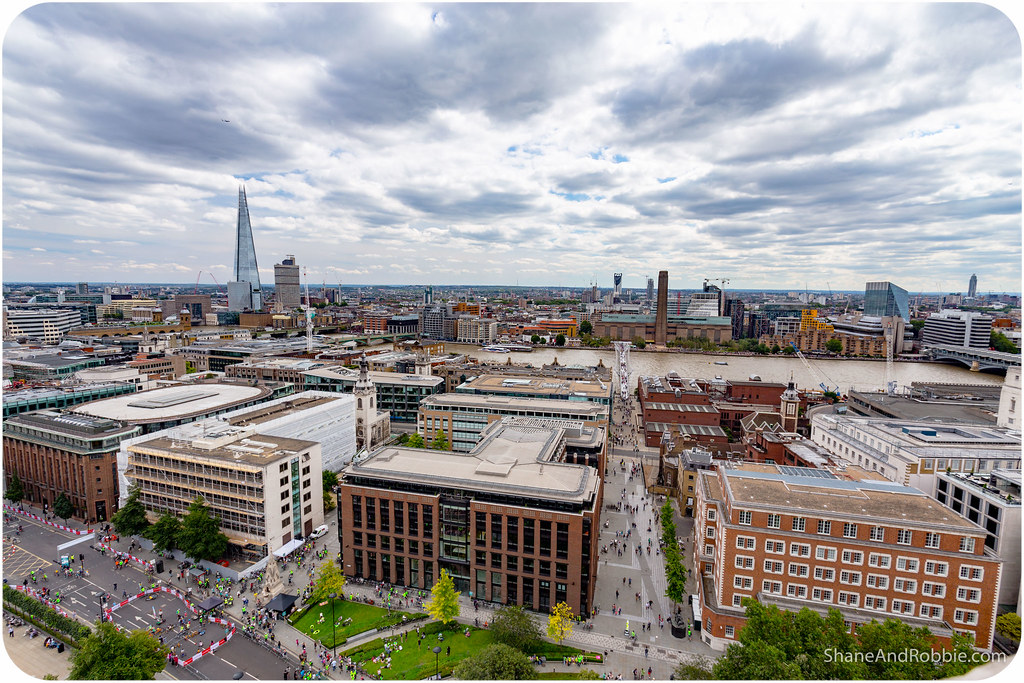 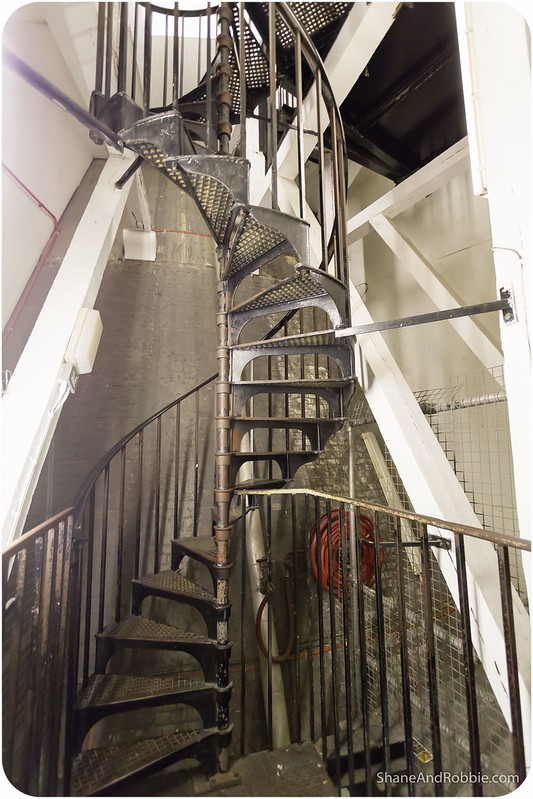 After a quick lunch at a nearby café we continued on to one of London’s most visited sites: the Tower of London (or as we think it should be called: Ye Olde Castle of London). 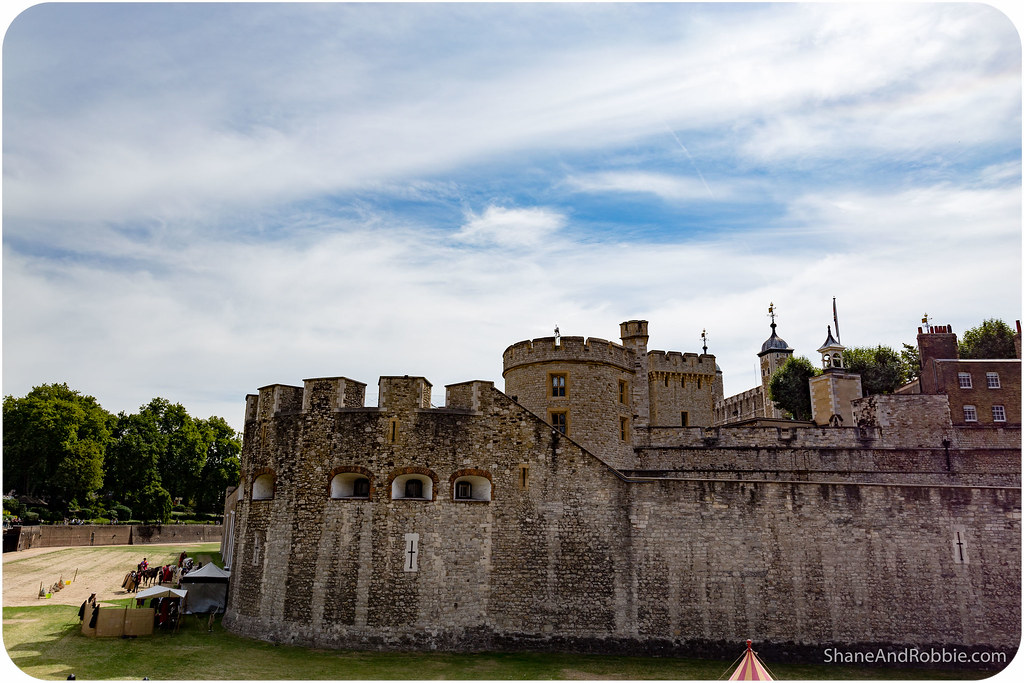 The central part of the castle, known as the White Tower, was built in 1078 by William the Conquerer and still stands at the heart of the castle complex. Today it houses a wicked museum on war and weapons, which includes King Henry VII’s suit of armour and the swords of numerous British Kings. Very cool! 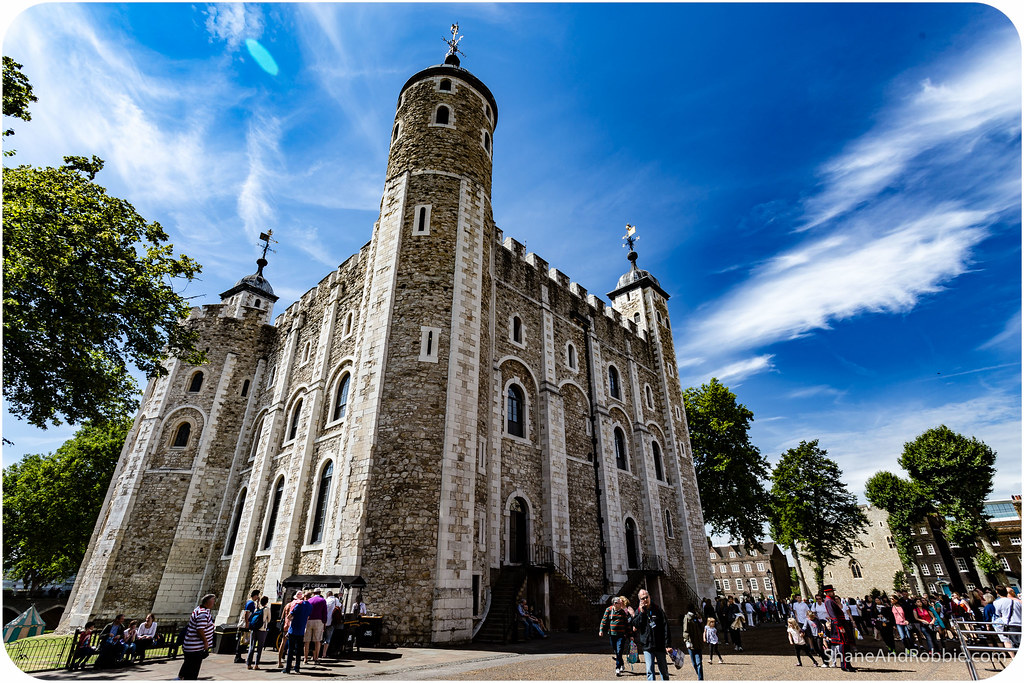 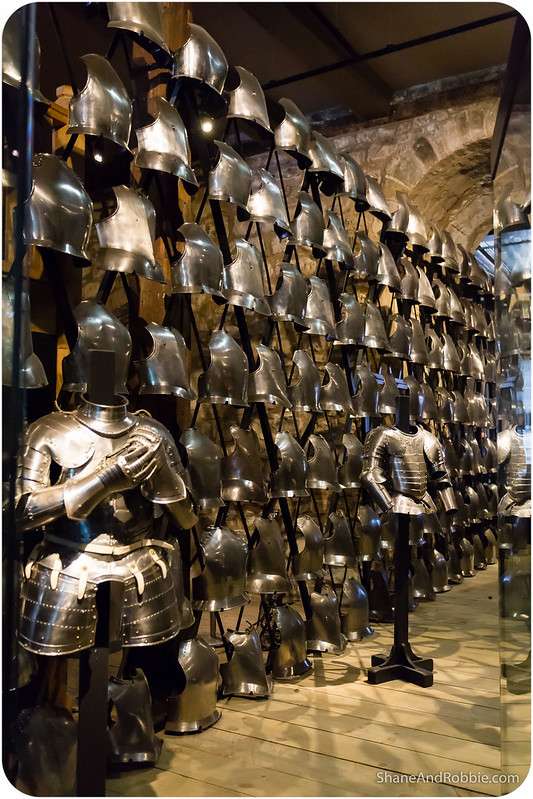 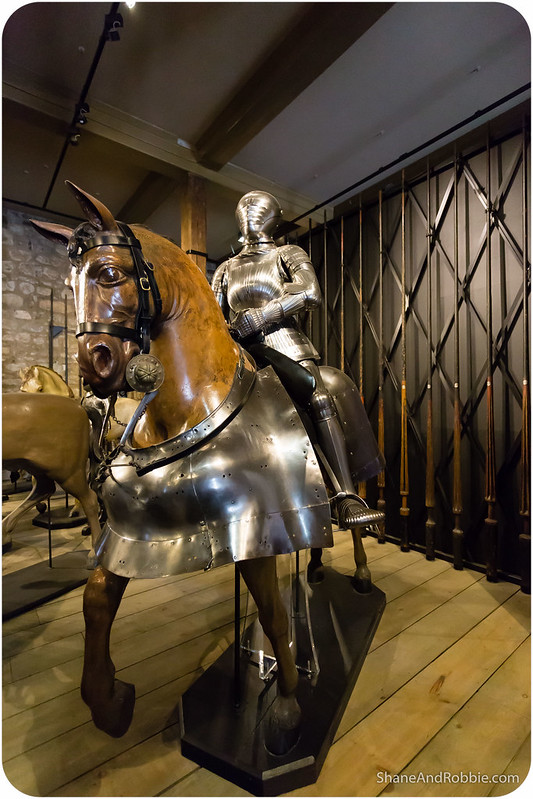 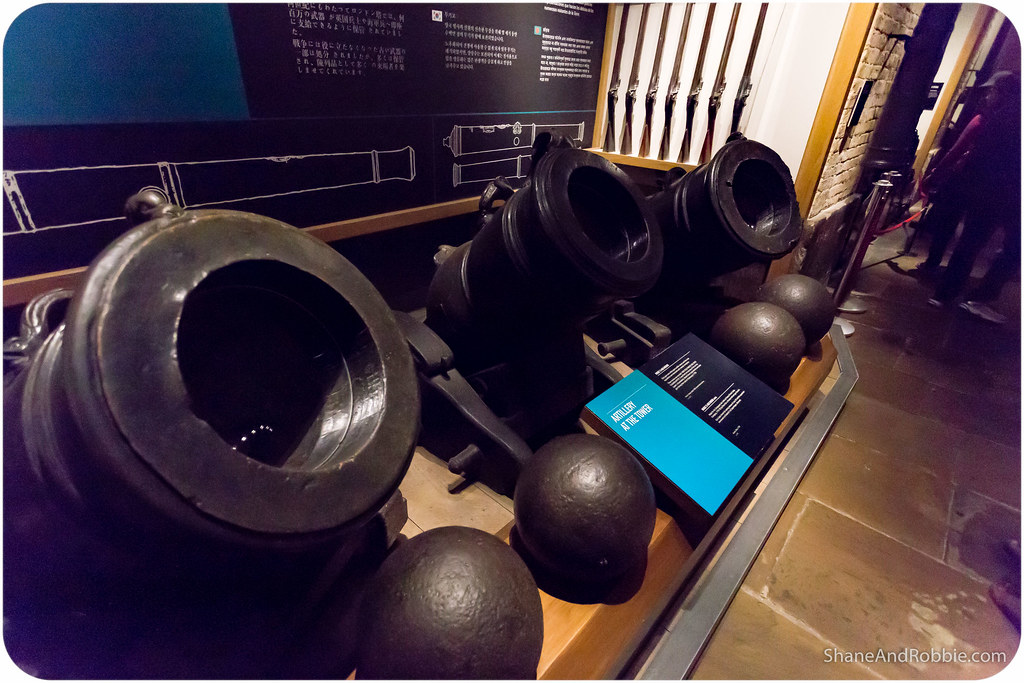 The castle was expanded a number of times, mainly under Kings Richard the Lionheart, Henry III, and Edward I in the 12th and 13th centuries. The end result is a castle made up of two concentric rings of buildings, defensive walls, and a moat. A grand palace early in its history, the Tower of London served as a royal residence for almost 400 years (until Henry VII moved the royal residence out of the castle and turned it into a prison).

The Tower of London’s reputation as a place of torture and death evolved during its centuries of use as a prison. The peak period of the castle’s use as a prison was the 16th and 17th centuries, when many figures who had fallen into disgrace were held within its walls and executed there. A few ghosts are said to haunt the Tower too, many of them people executed within its walls. Most famously the ghost of Anne Boleyn, beheaded in 1536 on orders of Henry VIII, allegedly haunts the grounds and walks around the White Tower carrying her head under her arm. We didn’t see any such ghostly figures roaming the halls, though we did get to see a parade of people dressed up on period costumes and a jousting demonstration, which was very cool. 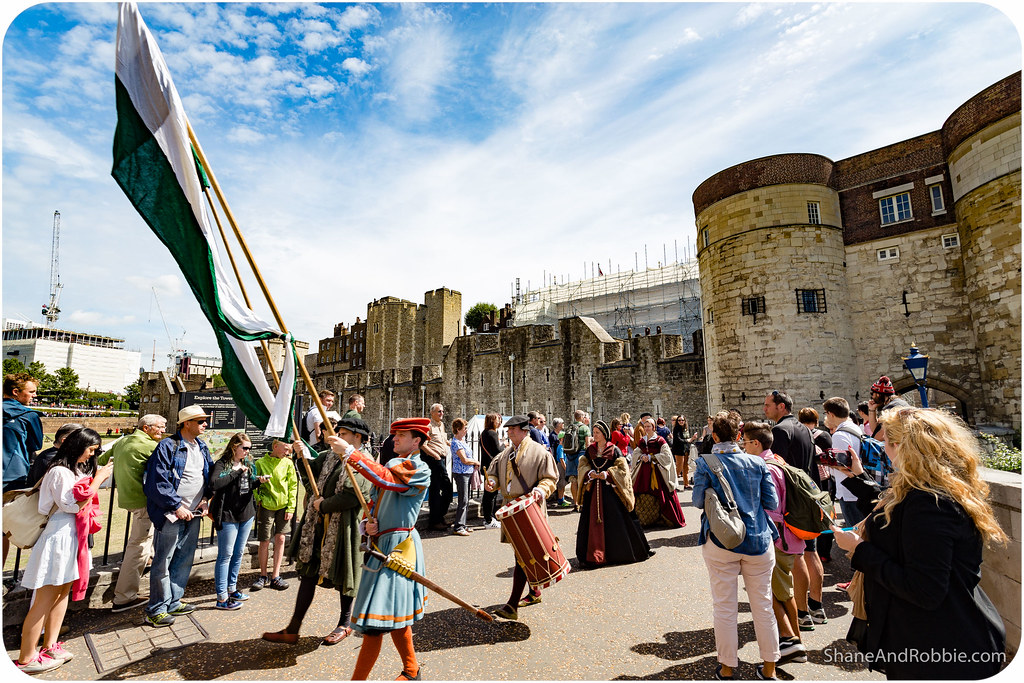 The Tower’s gruesome history is part of the reason people have flocked to visit the site since the 18th century. The other reason is that this is where the English Crown Jewels are kept and displayed. They’re housed in the Waterloo Barracks and are REALLY popular. We stopped by to take a look (so many diamonds!), and had to shuffle past with 1,000 of our new friends pushing and shoving around us. Kind of detracts from the the moment a little bit, but we still got to appreciate the sheer BLING of all those sparkly crowns, sceptres, etc. 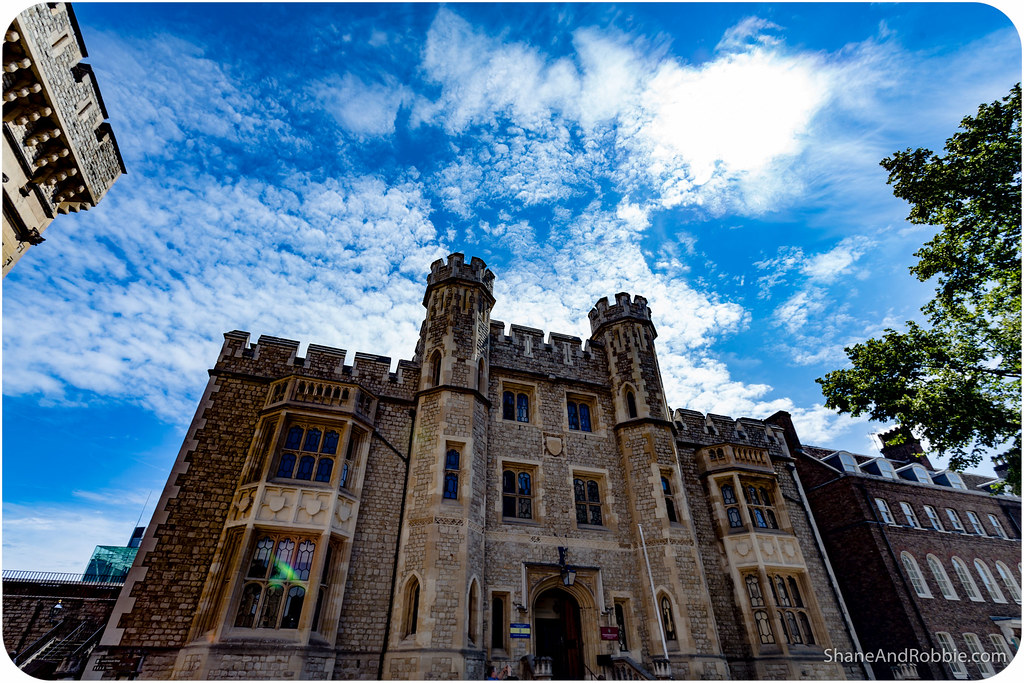 The Crown Jewels are guarded by some of the Queen’s Guards. Dressed in their formal red and black suits and fluffy hats, they looked pretty cool (actually they looked very HOT and sweaty under the warm summer sun). 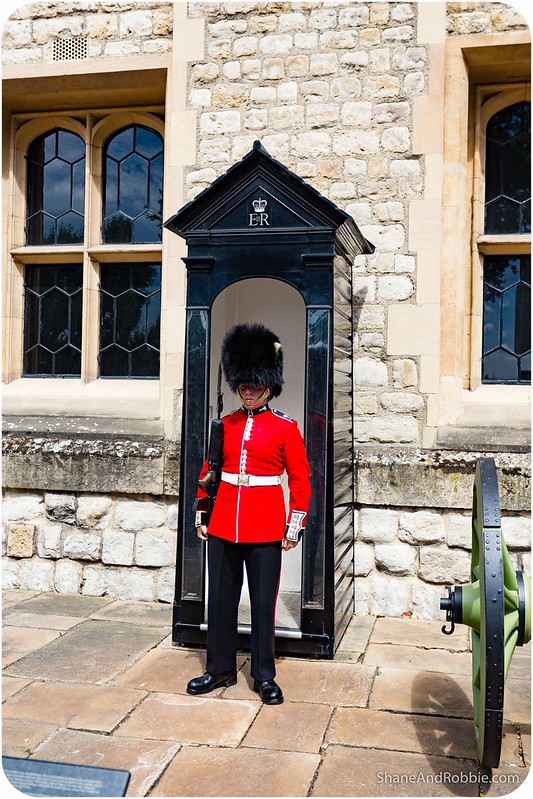 In the courtyard of the keep we could see a few ravens hopping around. They all had clipped wings so we had to ask what that was all about. Turns out there’s a legend/superstition that says that at least 6 ravens must be kept at the Tower at all times, otherwise the British kingdom will fall. Errr… sure. 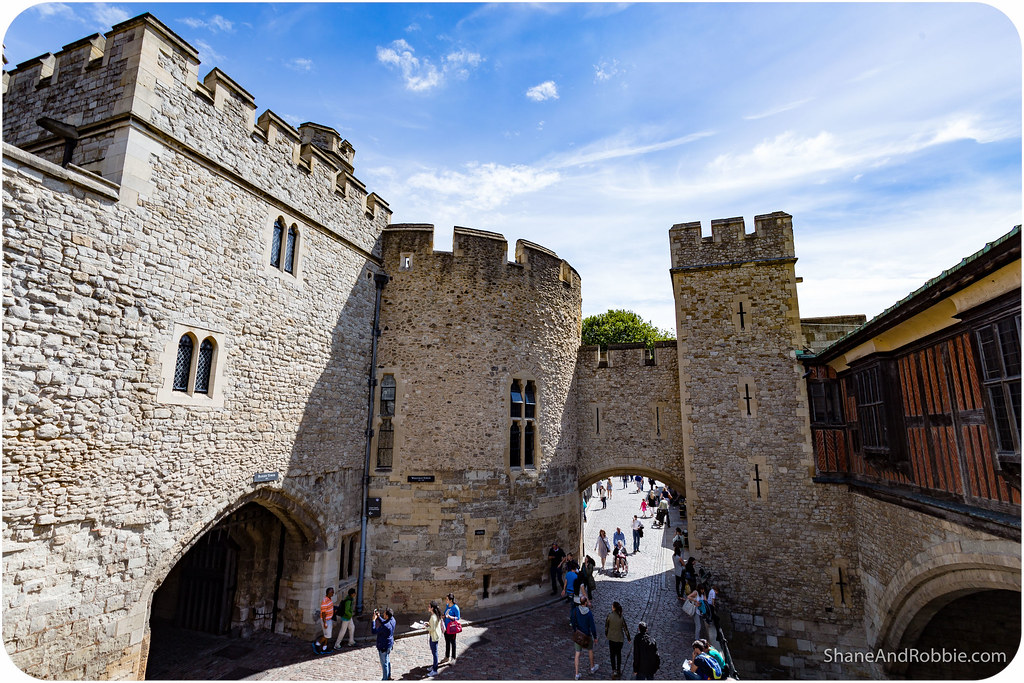 The guy we asked about the ravens was a Yeomen Warders. The Yeomen Warders, popularly known as the Beefeaters, are the ceremonial guardians of the Tower of London. In principle they are responsible for looking after any prisoners in the Tower and safeguarding the British crown jewels, but in practice they act as tour guides. 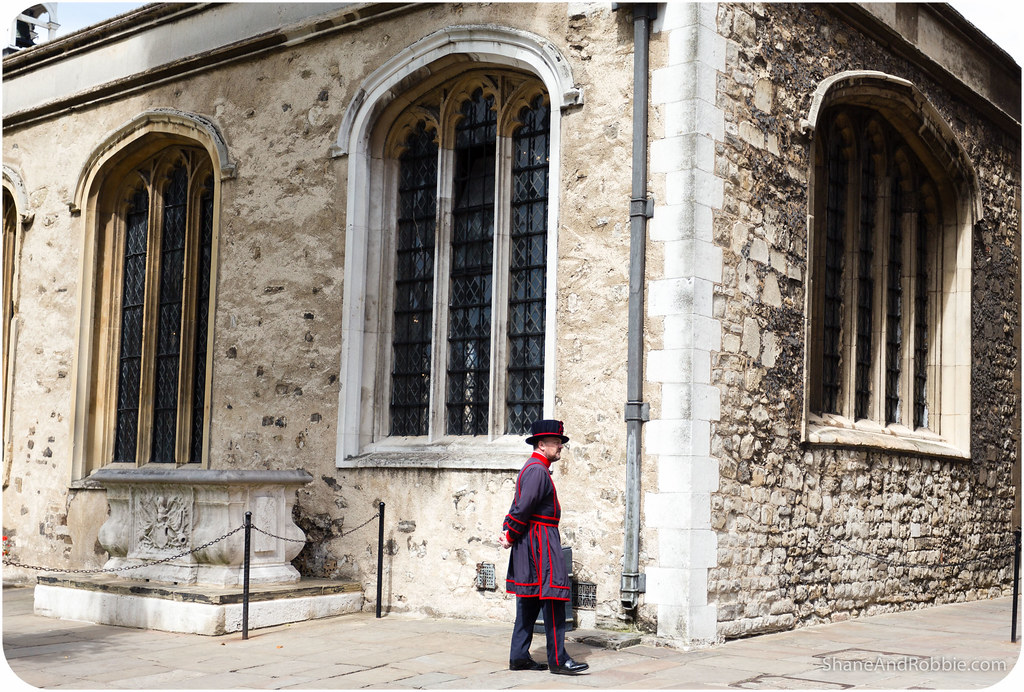 Having finished our explorations of London’s ancient castle we decided to call it a day. There was just one more photo stop that we HAD to do before catching the Tube back to our neighbourhood: Tower Bridge (better known as London Bridge). 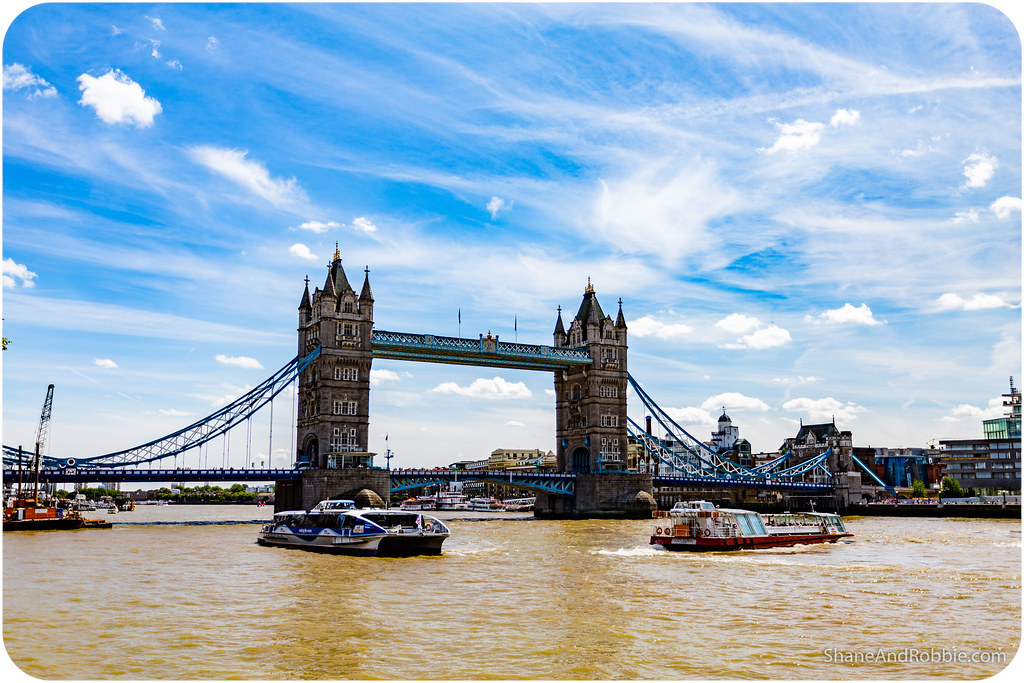 Blue skies above, the buzz of people EVERYWHERE, buckets of history, art and culture… ahhhh London! Does it get much better than this?! 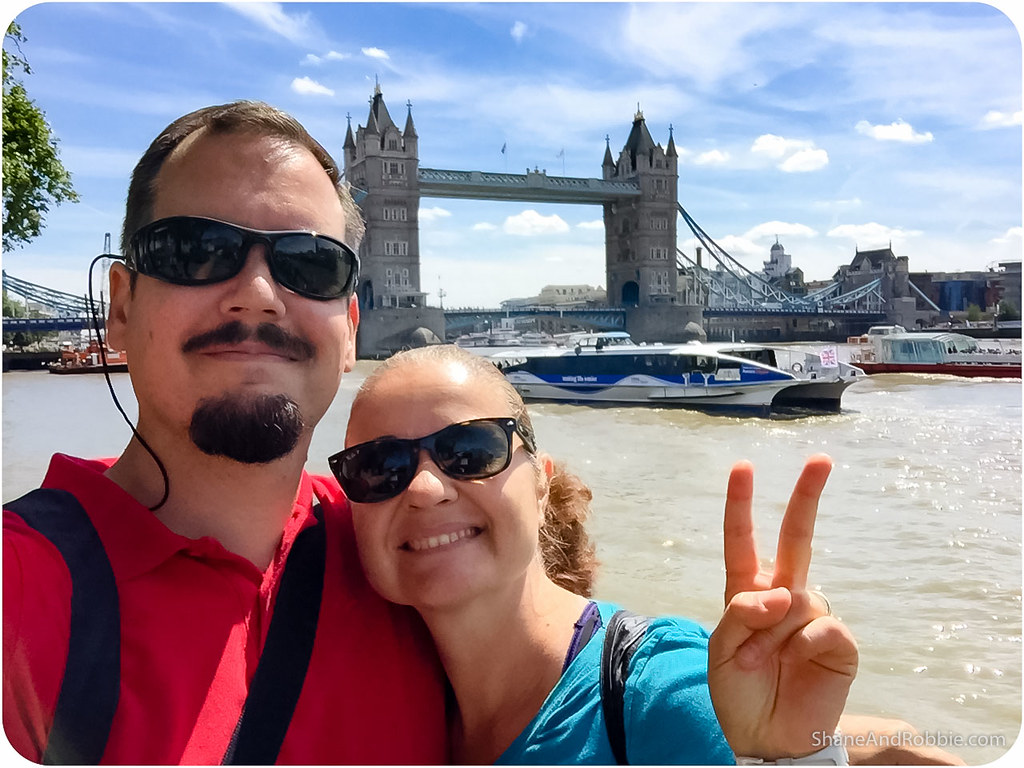