GETTING CHEESY IN HOLLAND

The joy of a Eurail Pass is it means you can jump on any train, at any time, and go anywhere in Europe. So today we took our Eurail Passes and set off to Noord Holland* for a day trip to see how many cheesy Dutch clichés we could cram into one day. The count so far includes: big wheels of golden Gouda cheese, hand made wooden clogs, pretty blonde girls in traditional Dutch garb, equally pretty blonde guys in traditional Dutch garb, cute wooden cottages lining even cuter canals, Heineken beer, and a dozen giant windmills. Truly a cheesy day. 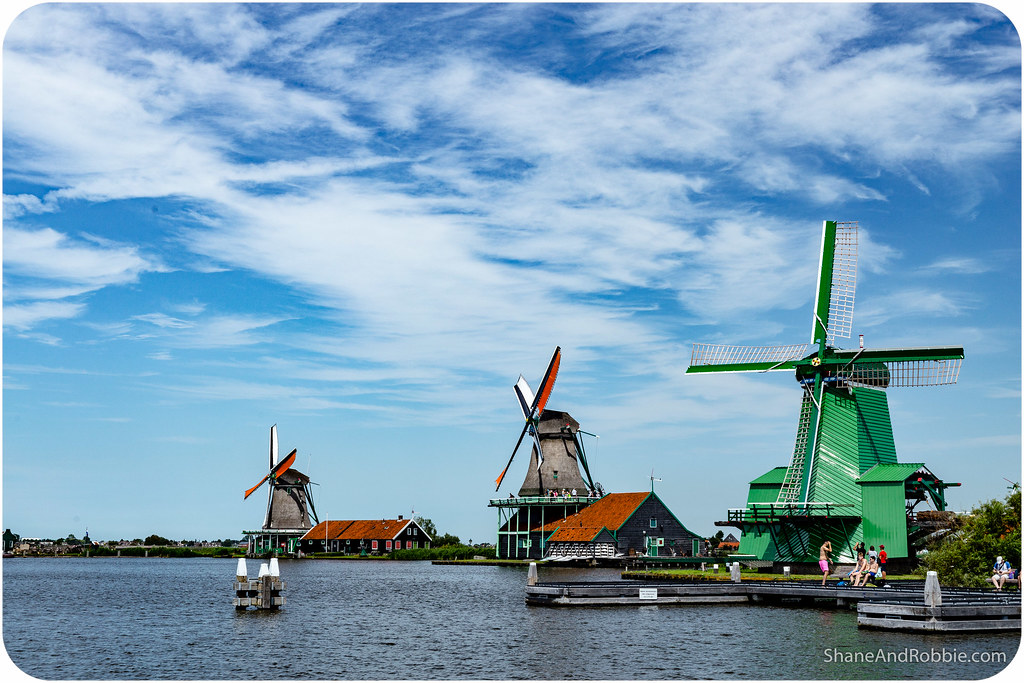 Our first stop was the town of Alkmaar, famous for its Friday kaasmarkt (i.e. cheese market) where well-known brands of Dutch cheeses like Edam and Gouda are auctioned off.

For 400 years Dutch cheese producers have been bringing their cheeses to the market square in boats and by cart. Once in town official guild cheese-porters (known as kaasdragers) carried the farmers’ cheese on barrows to the auction area, where buyers sample the cheese before negotiating a price. To help record the days sales and purchases, a couple of girls (dressed in traditional Dutch garb of course), where there to tally things up. 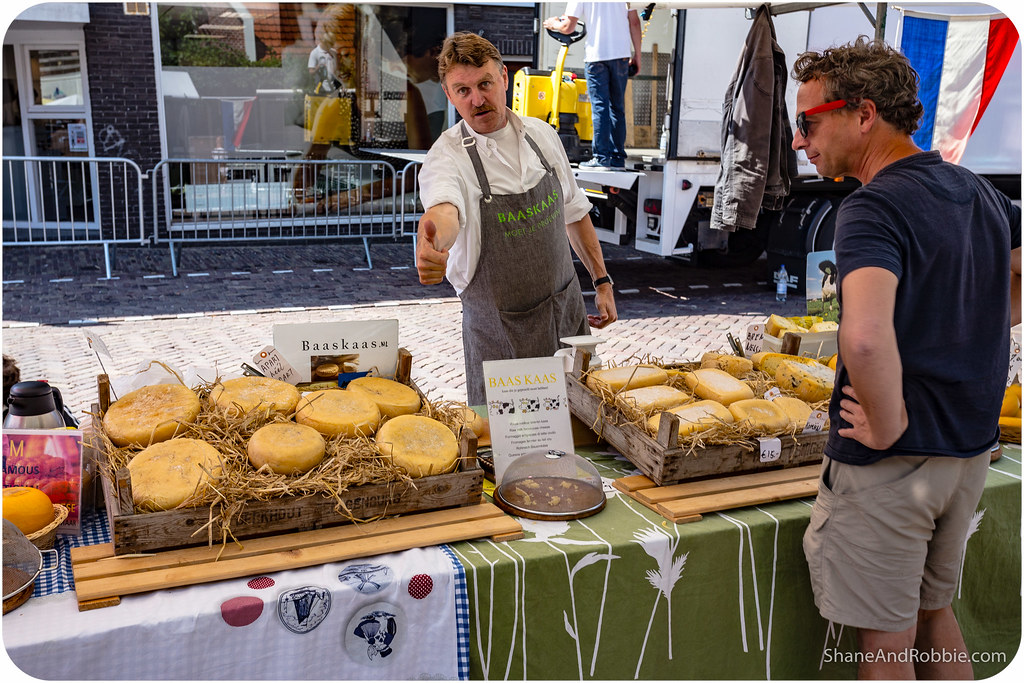 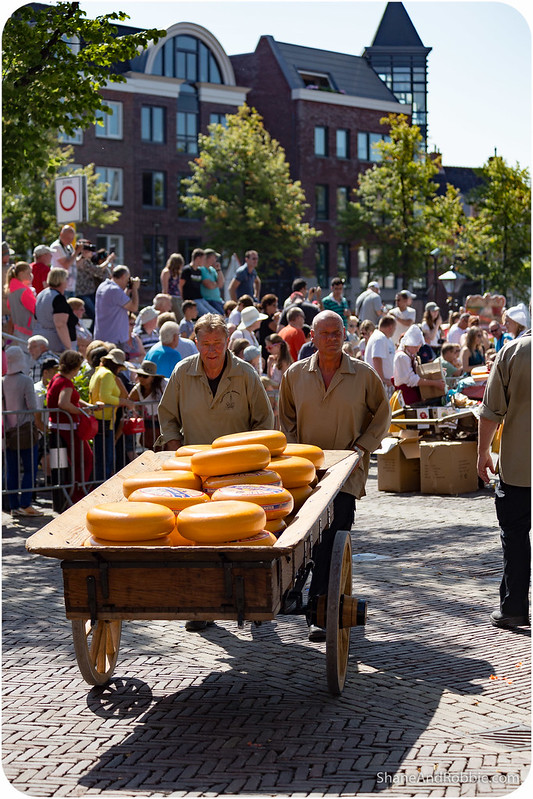 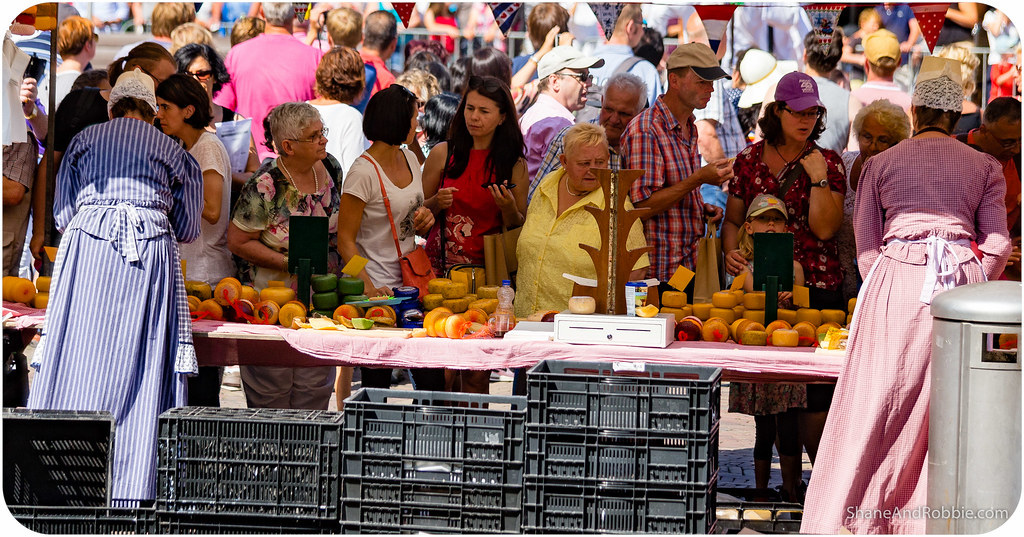 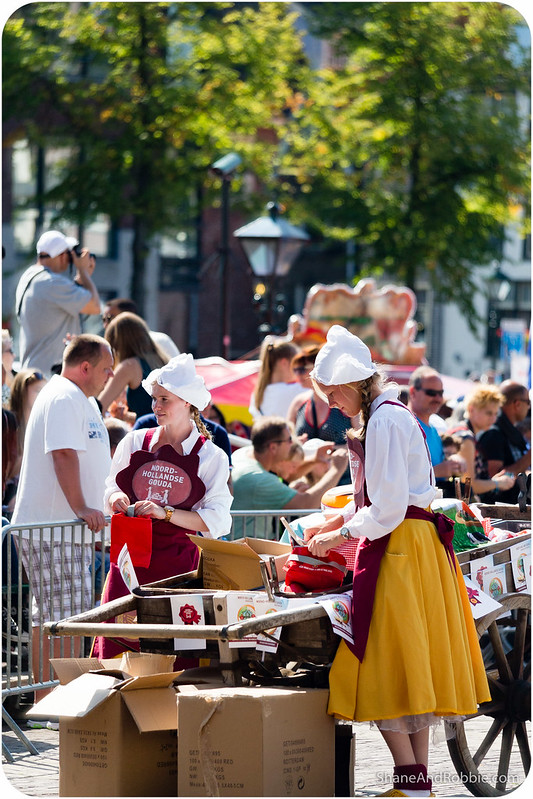 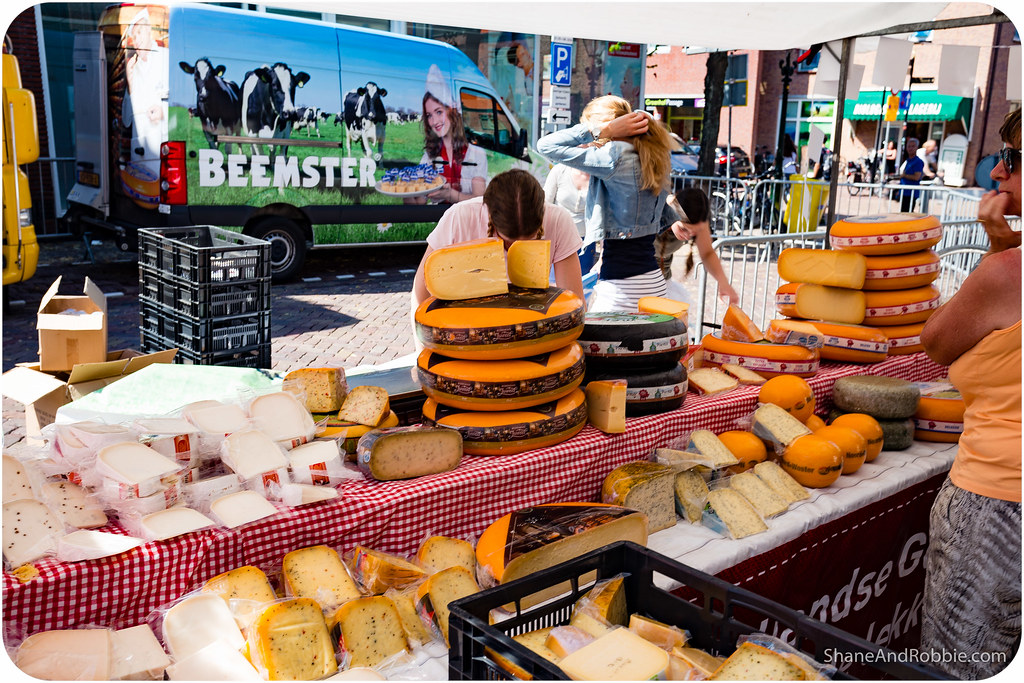 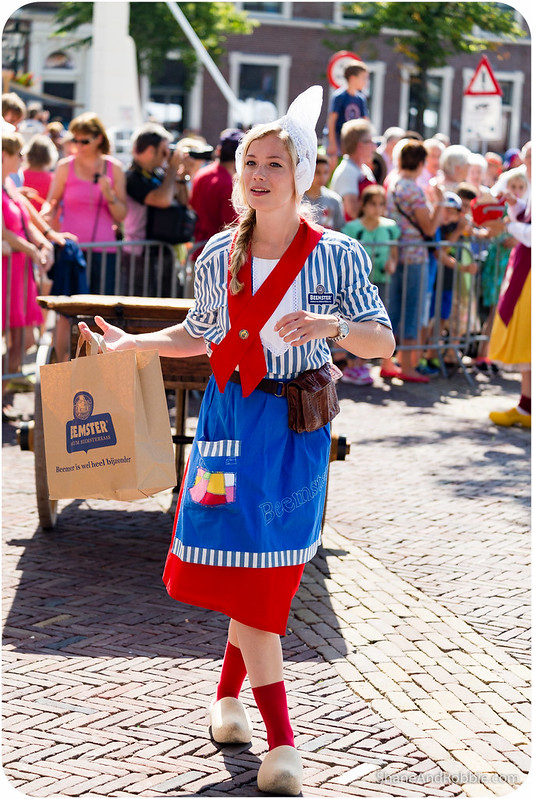 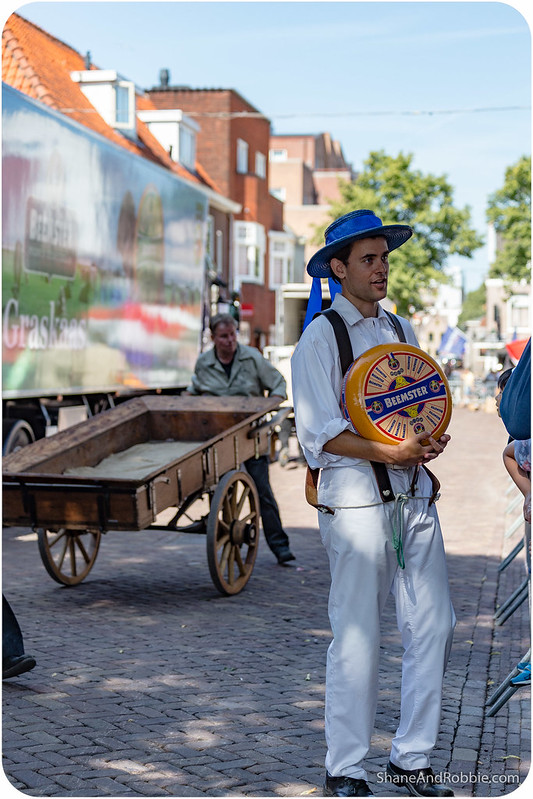 The cheese market attracts hordes of tourists, keen (like us) to see this tradition reenacted. To cater to all us visitors, there were a whole lot of market stalls selling everything from hand made clogs, to art, crafts, and, of course, cheese. We’re not really in the market for any wooden shoes or hand blown glass, but after sampling a dozen different varieties of Gouda, we just had to take a little bit of Alkmaar’s kaasmarkt home with us. 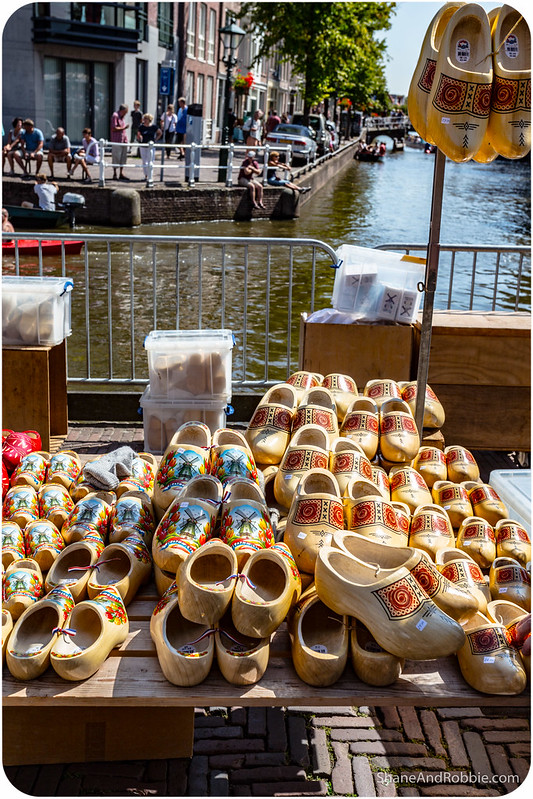 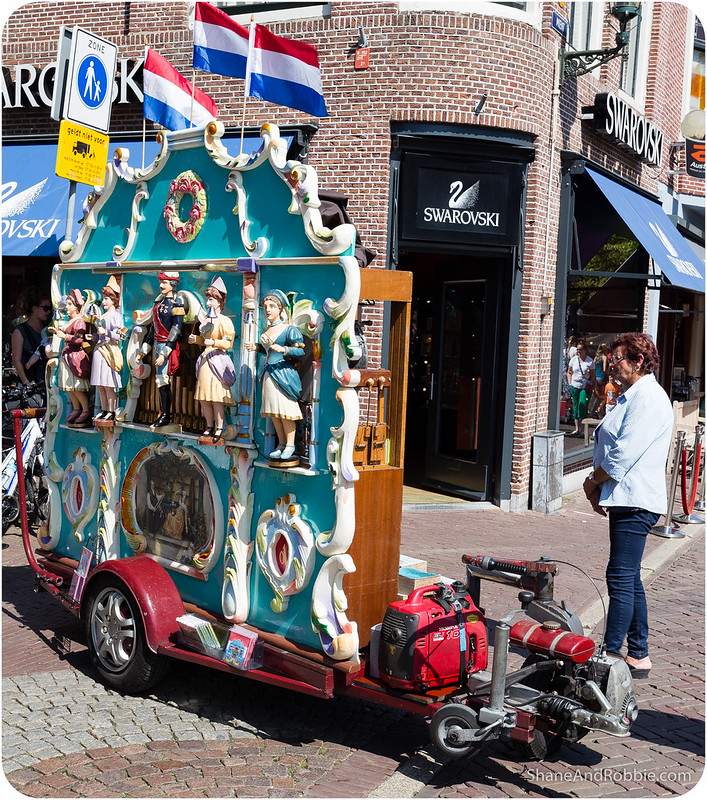 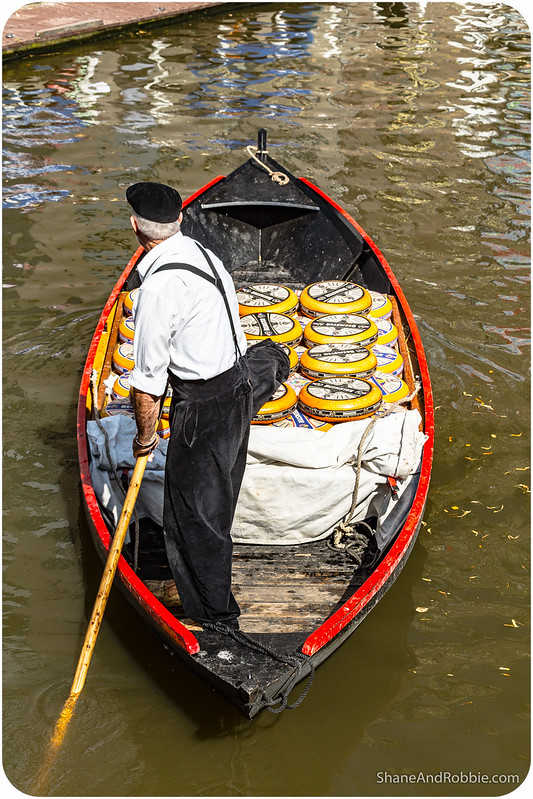 As well as the cheese market, Alkmaar was an attraction in and of itself. The town was really pretty, with a whole lot of well preserved 17th century buildings lining the canals and narrow streets. 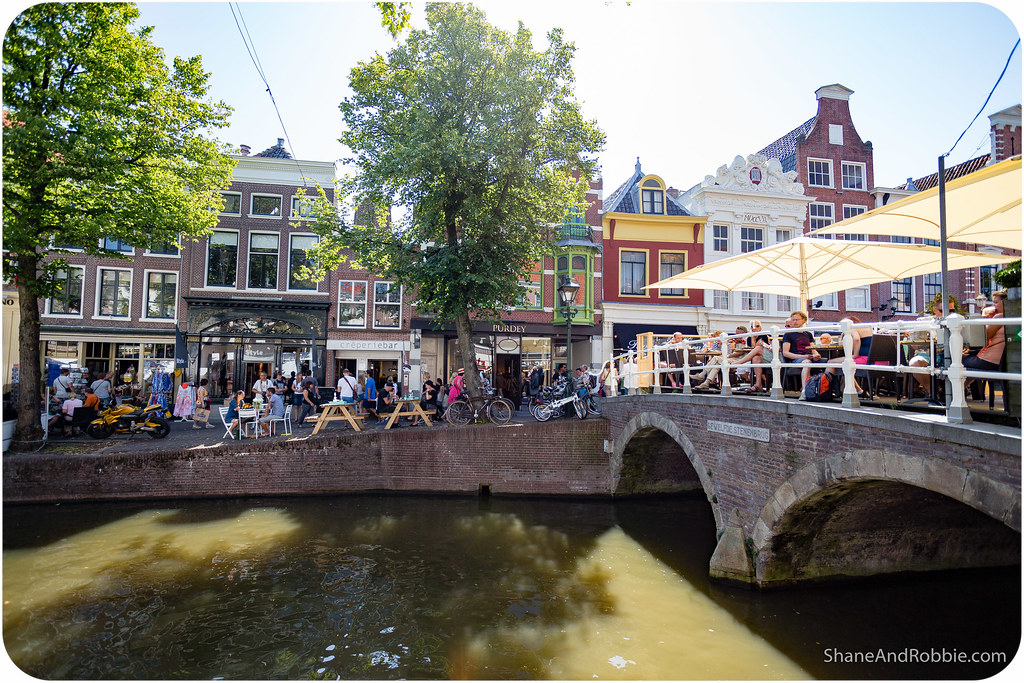 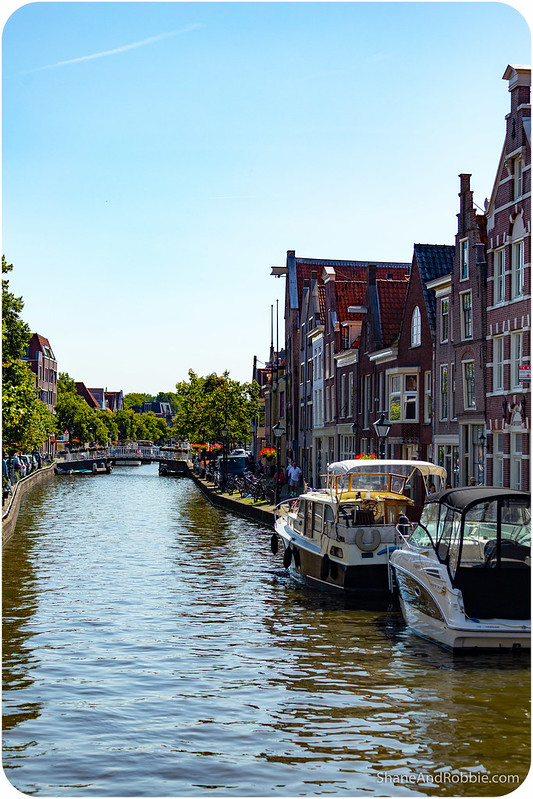 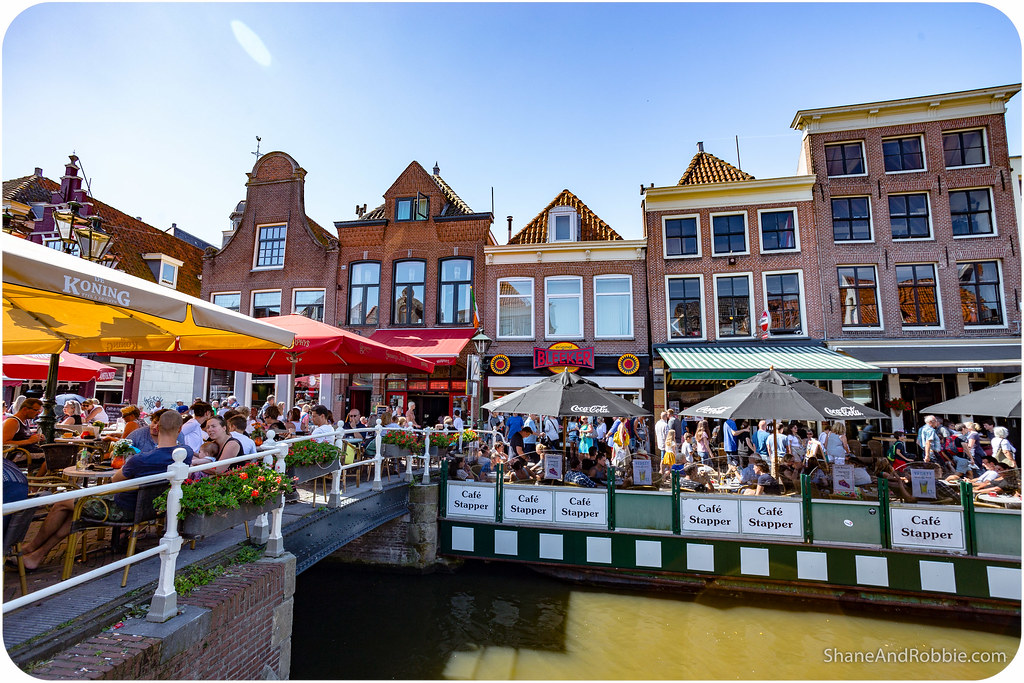 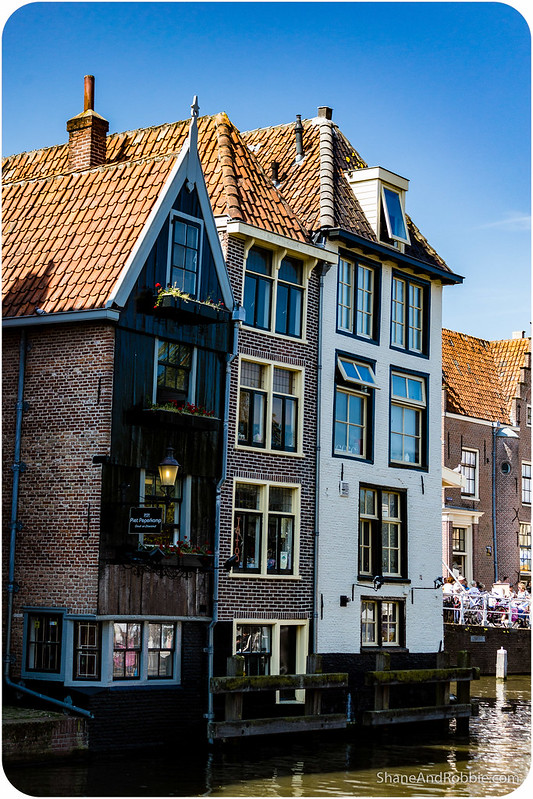 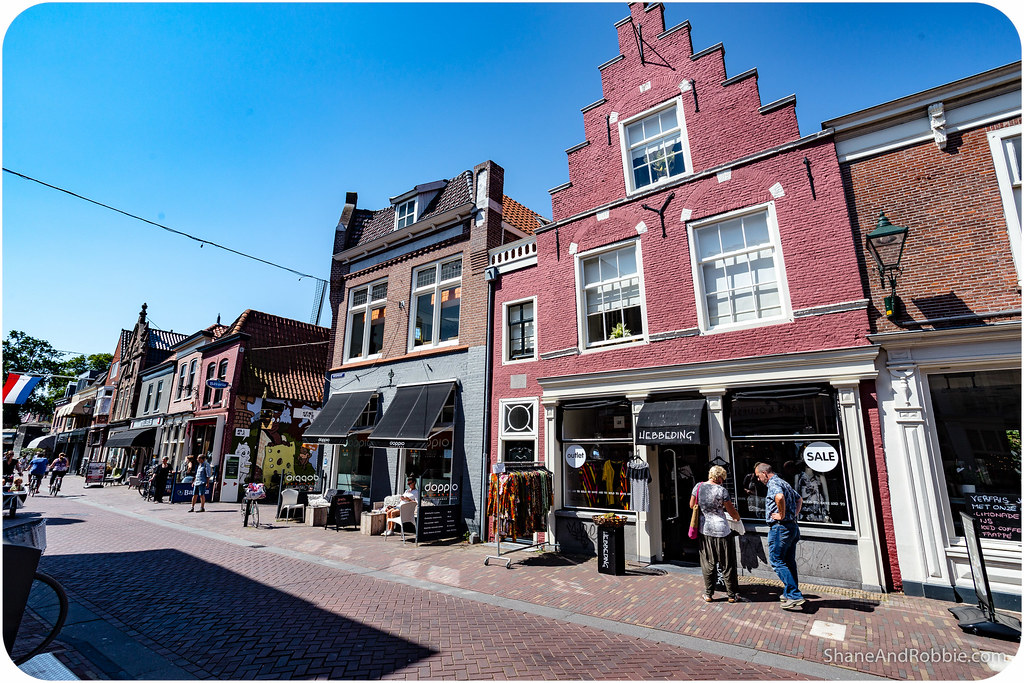 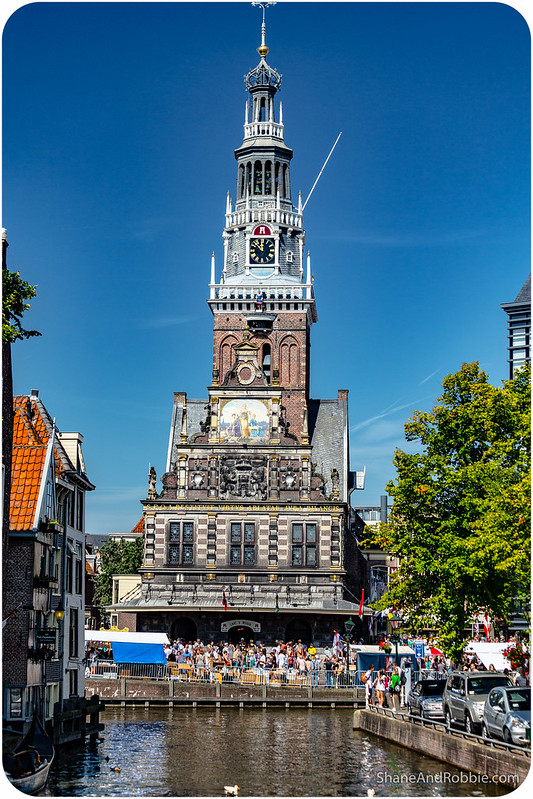 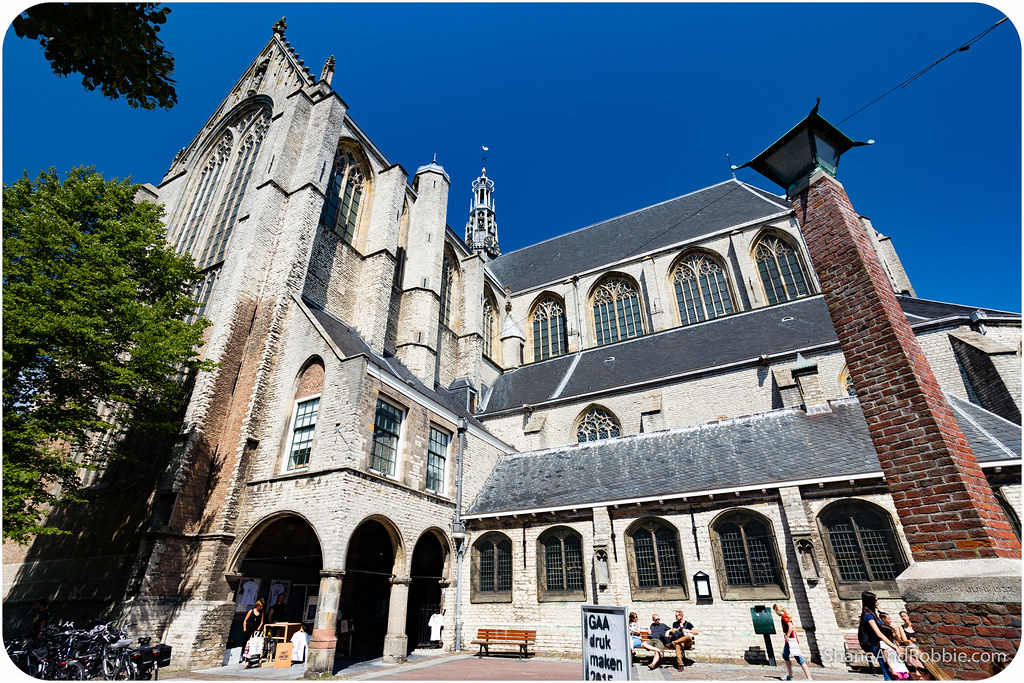 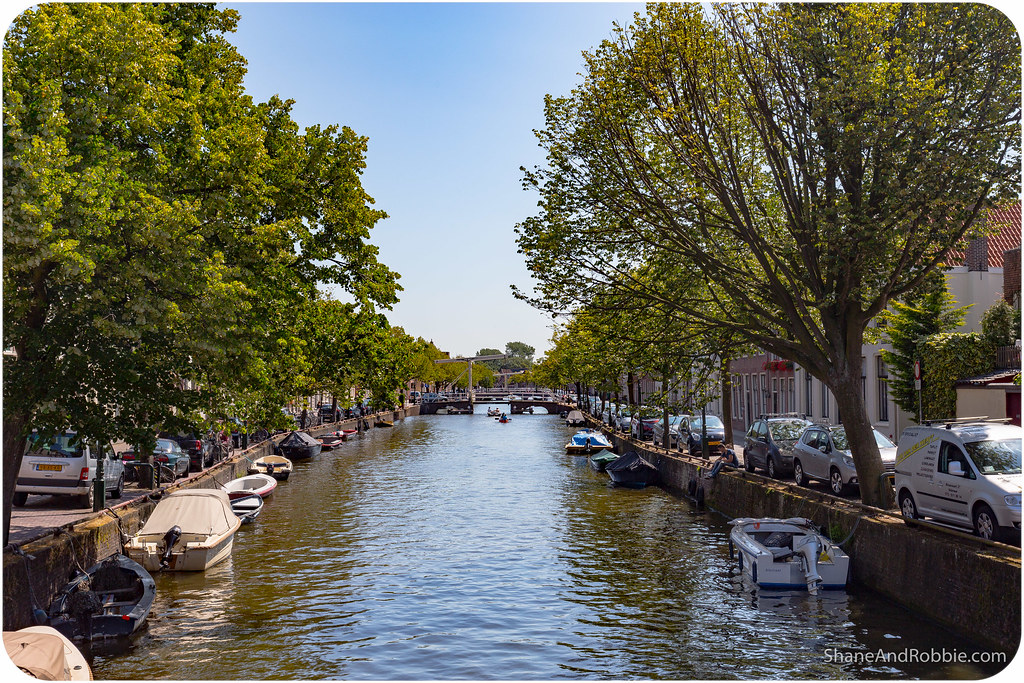 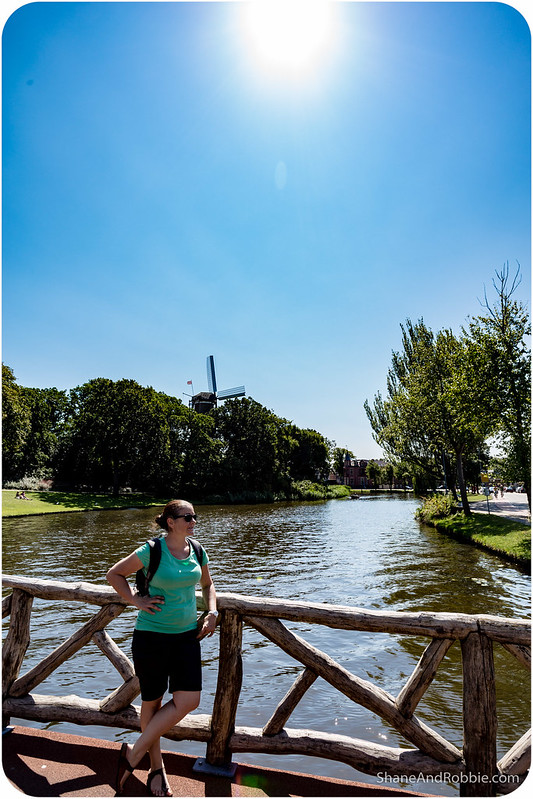 We had lunch in Alkmaar before deciding to move on and see Zaanse Schans, another little village in Noord Holland famous for its cheesy, touristy Dutch sights. The views from the train on the way there were as expected: green, lush, very flat, and lots of water channels everywhere! 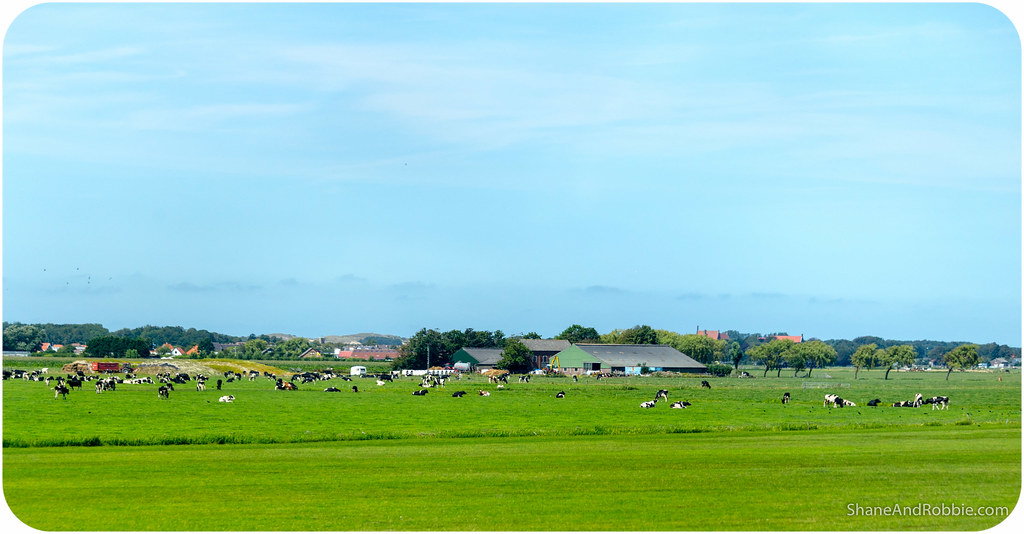 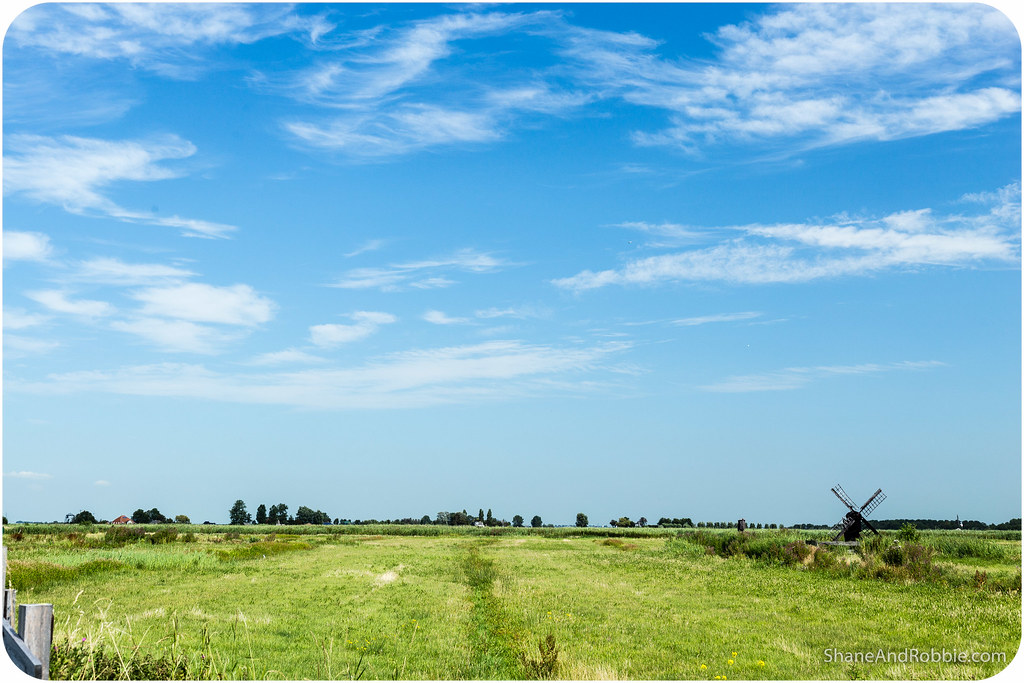 Zaanse Schans is a small town that was put on the tourist map in 1972 when its open air museum was opened to the public. The museum is comprised of half a dozen working windmills and about 30 traditional wooden cottages, moved to the area in the 1960s and now converted into souvenir shops and cafés. The idea was to preserve some of the areas traditional architecture and heritage by saving the windmills and homes, and turning them into a tourist attraction. The end result is ridiculously picturesque, and unsurprisingly popular with visitors. 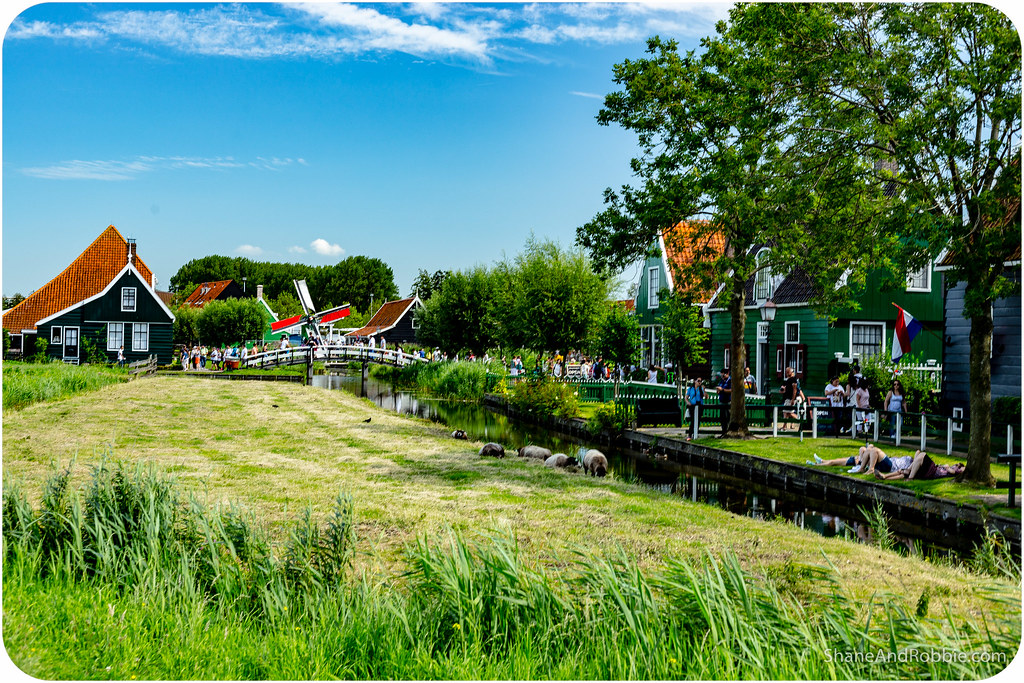 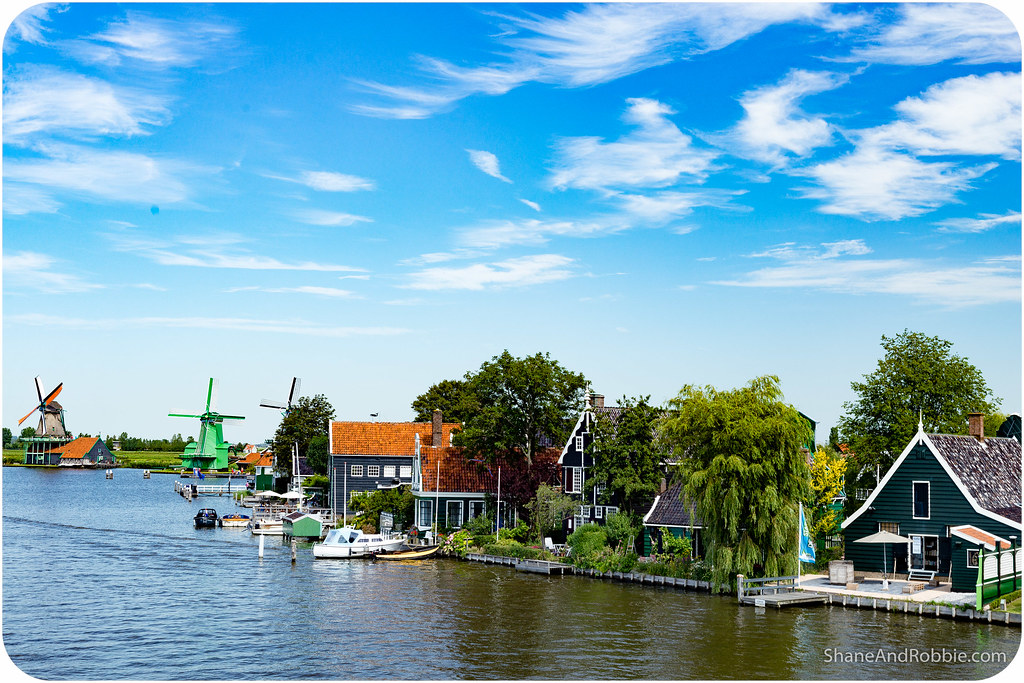 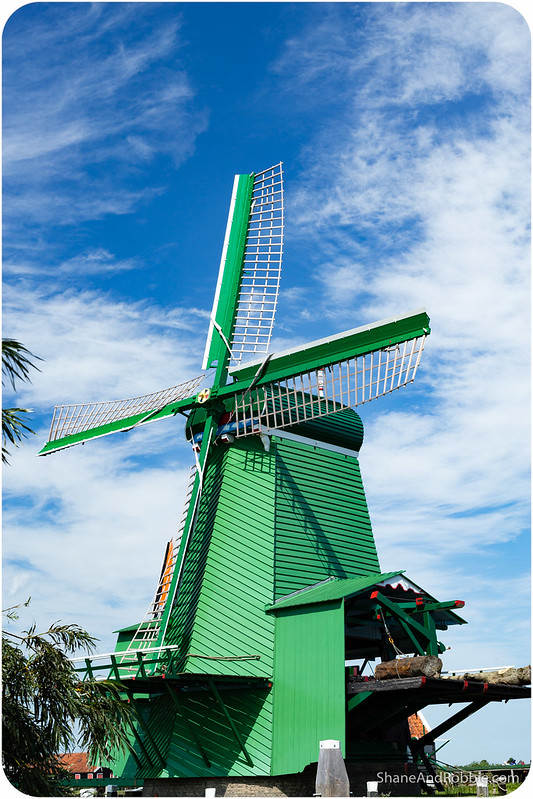 Windmills are iconically Dutch; they were once used for a whole variety of purposes, from grinding grain, to helping pump water out of marshland, and saw timber. However, with the advent of mechanisation and electricity, windmills became less important and by 1920 there were fewer than 1,000 working windmills left in The Netherlands. Today there are just a few left standing and even fewer still in operation. The 6 working windmills at Zaanse Schans are used as grain mills, saw mills, oil mills, and the world’s last working dye mill. The oldest of these dates from 1676 and is still in use as an oil mill, it’s huge millstones crushing seeds and nuts to release their oil. The products from each windmill are available for purchase, alongside other traditional Dutch goodies like clogs, cheese, and Dutch pancakes. 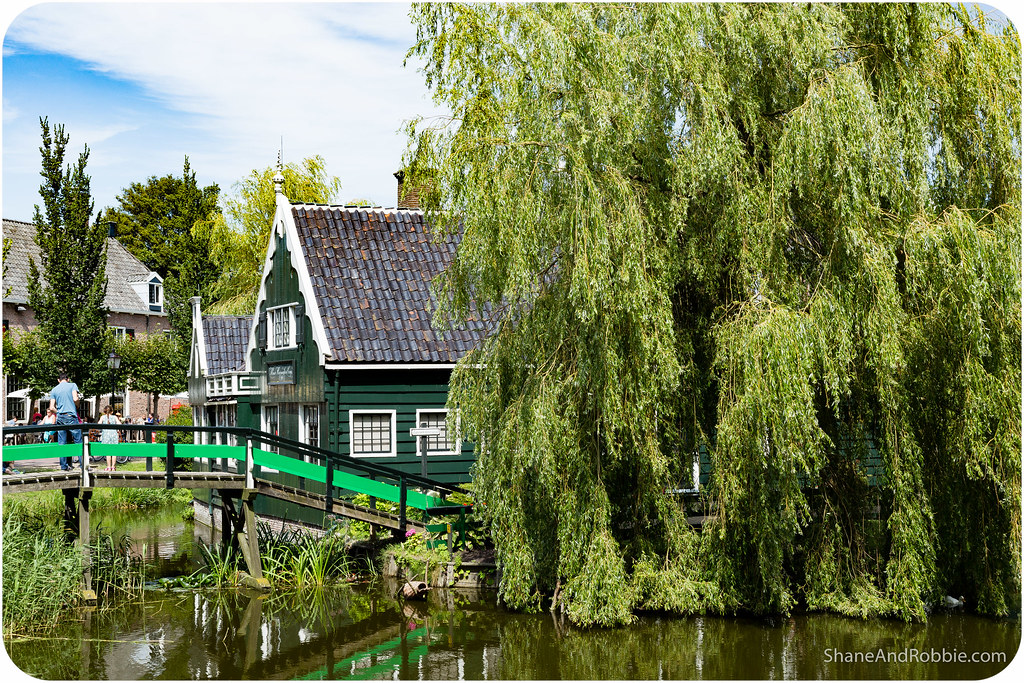 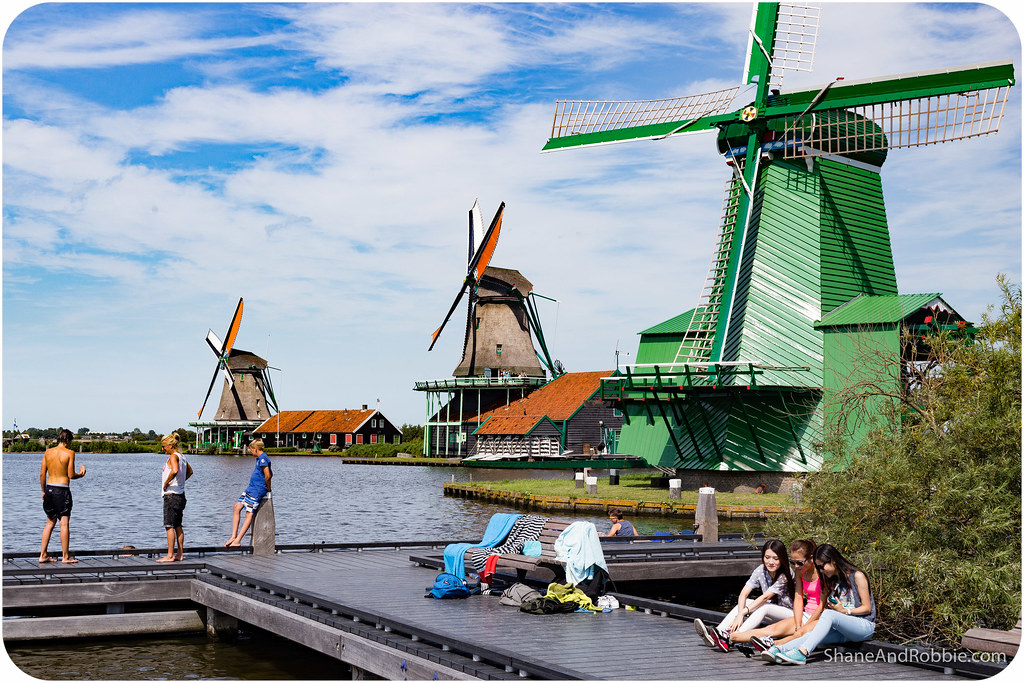 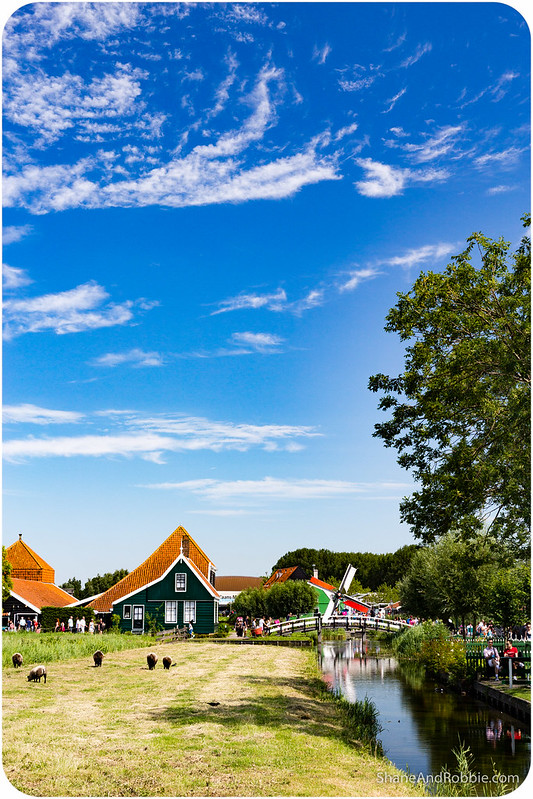 Zaanse Schans is very touristy and, though cute, doesn’t warrant more than a quick visit. So after just a couple of hours, we jumped back on the train and headed back to Amsterdam for our third night in the city. Inspired by our Alkmaarian mini-wheel of cheese we decided to have a picnic for dinner and bought some Italian mozzarella, Spanish jamon, Greek olives, German rye bread, and fresh cherry tomatoes to with our Dutch Gouda. Such a multinational feast and a great way to end our very cheesy Dutch day! 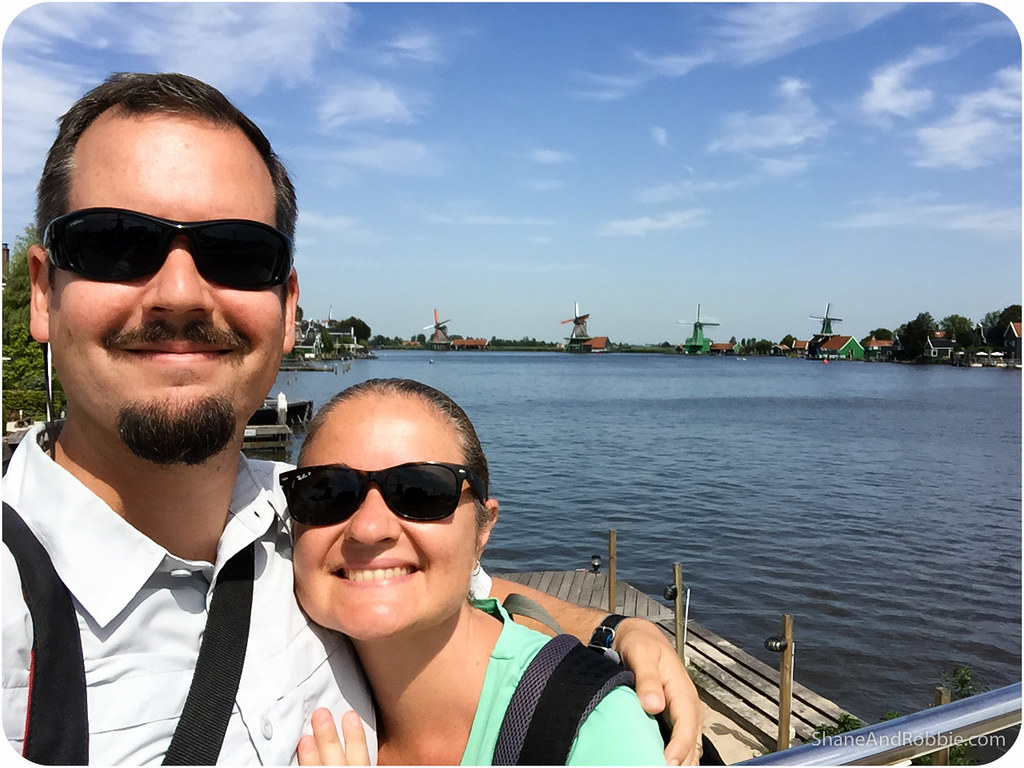