A GHENTAL INTRODUCTION TO BELGIUM

Welcome to Ghent* ladies and gentlemen! Ghent is modern Belgium’s fourth largest city and our home for the next few days. We’re here to enjoy the town’s beautifully preserved medieval architecture, see some of its sights, and then use this as a base from which to explore a bit more of the Northern Belgium region of Flanders. We arrived this afternoon on a train from Amsterdam and took a few hours to get to know our new home-away-from-home with a stroll through its streets. It was a very Ghental (gentle) introduction to Belgium and a great way to spend the afternoon.

*Gent in Dutch, Gand in French. 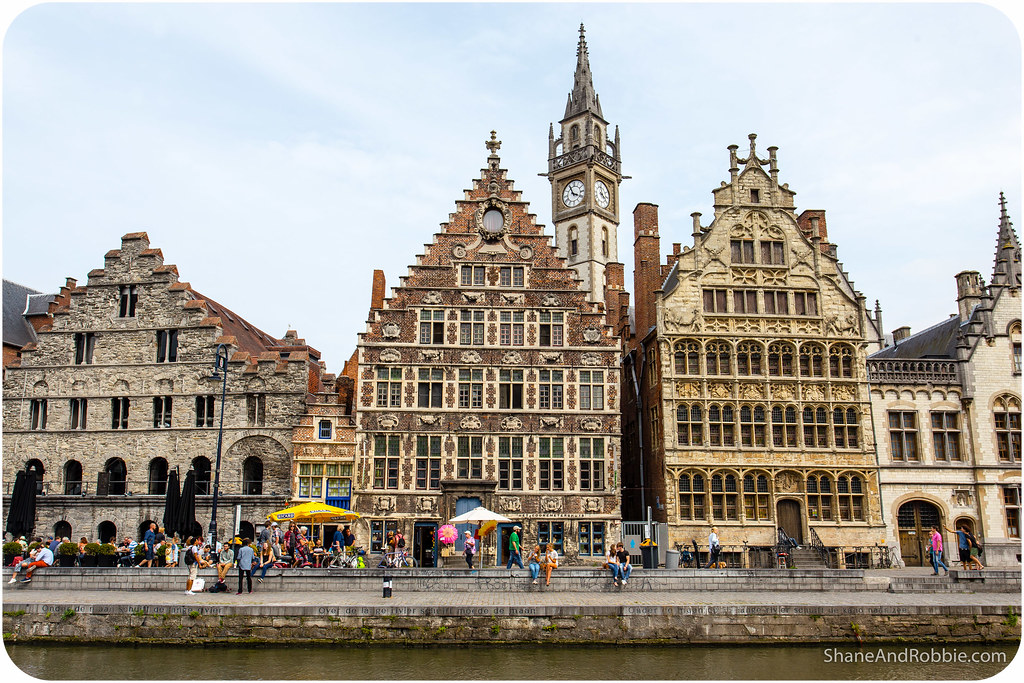 Beyond a few clichés (e.g. this is the land of chocolate and waffles), we didn’t know too much about Belgium. Since visiting a place gives us the perfect excuse to educate ourselves, we spent our time on the train from Amsterdam learning a bit more about this European nation. Some of our favourite Belgium-related factoids:

• Belgium is a founding member of the European Union, hosts several of the EU’s official seats, and Brussels, as well as being Belgium’s capital, is also the capital of the EU.

• The headquarters of many major international organisations (e.g. NATO) are here.

• Belgium was part of The Kingdom of the Netherlands for a while, until the Belgian Revolution in 1830 when the country gaine dits independance.

• Historically, Belgium, the Netherlands and Luxembourg were known as the Low Countries; now they’re often referred to as the Benelux region.

• From the end of the Middle Ages until the 17th century, the area of Belgium was a prosperous and cosmopolitan centre of commerce and culture.

• Due to its geographical position, Belgium has often served as the battleground between European powers, causing it to be dubbed the “Battlefield of Europe” (most recently during World Wars I and II).

• Like most Northern Europeans, Belgians tend to be liberal thinkers. They legalised euthanasia in 2002, and gay marriage in 2003.

• This is a good place to be a woman: Belgium has one of the lowest salary gaps between men and women in the EU; it has the highest proportion of female ministers in the world; and was one of the first to have a female parliamentarian (in 1921).

• Belgium was the scene of Napoleon’s final defeat, at Waterloo, south of Brussels.

• The saxophone was invented in Belgium, in the early 1840’s by Adolphe Sax.

• In the 15th century, Belgians were credited with inventing oil painting.

• Most billiard balls in the world are made in Belgium.

• Belgium beer is big business. They produce 800 different types of beer and drink an average of 84L per annum per person (that’s per man, woman and child – which means for every child not drinking their share, someone in this place has to drink double that!).

• French fries were invented here, not in France.

• Brussels sprouts do, in fact, come from Brussels originally.

• The national dish consists of mussels and fries.

• They do, in fact, make great chocolate here. It’s everywhere and it is truly delicious (we had to do some taste testing today, just to be sure). Funnily enough Brussels’ International Airport does the world’s biggest trade in chocolate!

• Belgian waffles are real (and smell amazing – cannot attest to the taste… YET). They were introduce to the world in 1958 at “Expo 58” in Brussels. 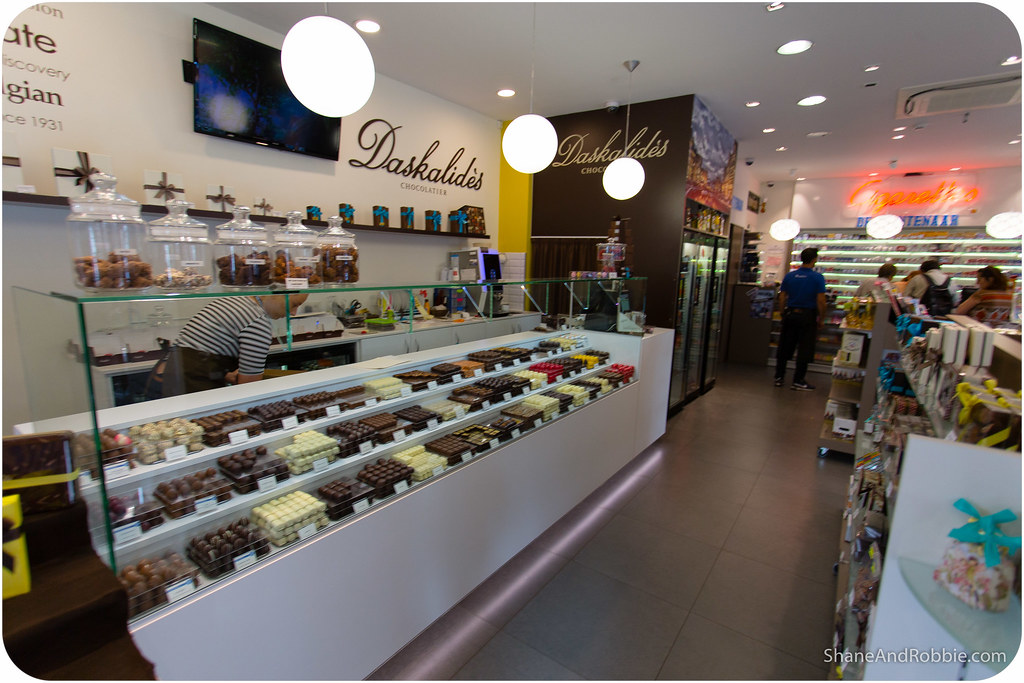 This sounds like it’s going to be a fun country to explore, right? Beer, chocolate, fries, waffles, history, art… what’s not to love?! If our afternoon in Ghent is anything to go by, Belgium will be great! 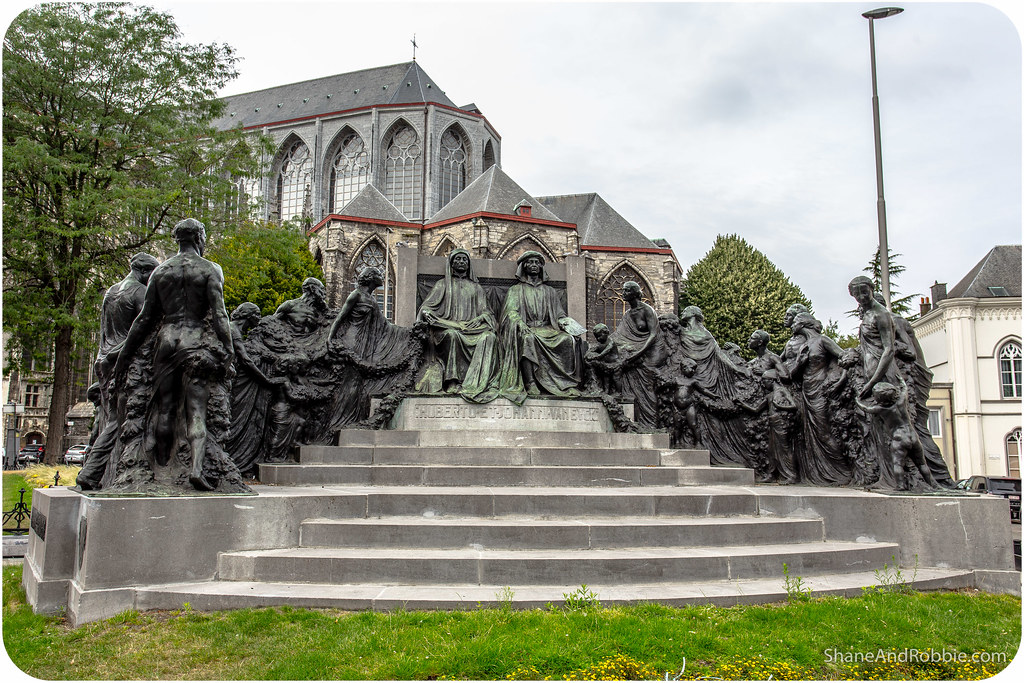 It’s position at the confluence of the Rivers Scheldt and Leie made Ghent a wealthy merchant town during the Middle Ages. Its wealth was built primarily on the cloth trade, with the city flourishing during the 14th century to become one of the biggest cities in Europe by 1300. So successful were the weavers in Ghent that wool had to be imported from England and Scotland to cater for the demand! It was during these “boom years” that Ghent’s grand warehouses, guild houses, churches, and townhouses were built. 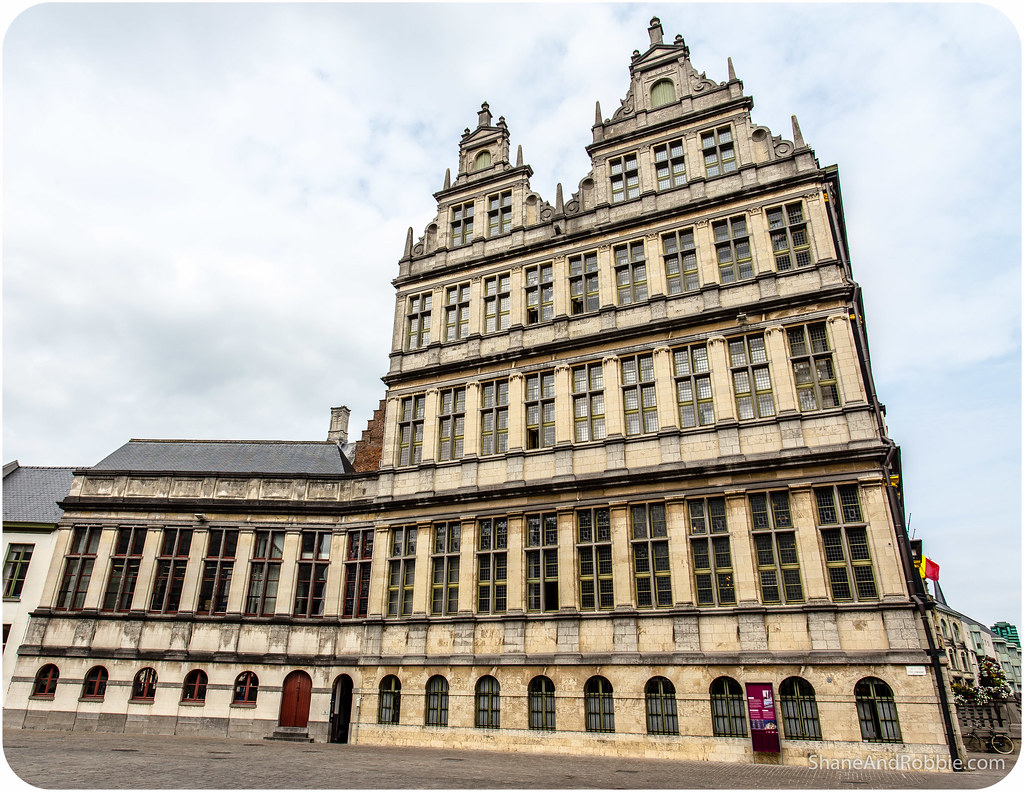 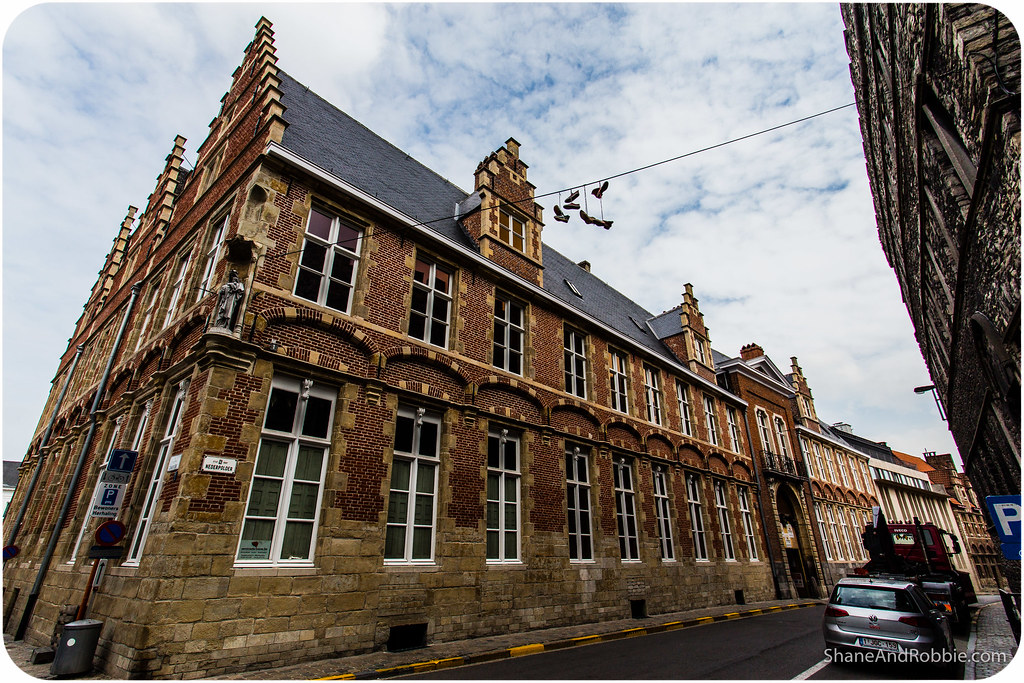 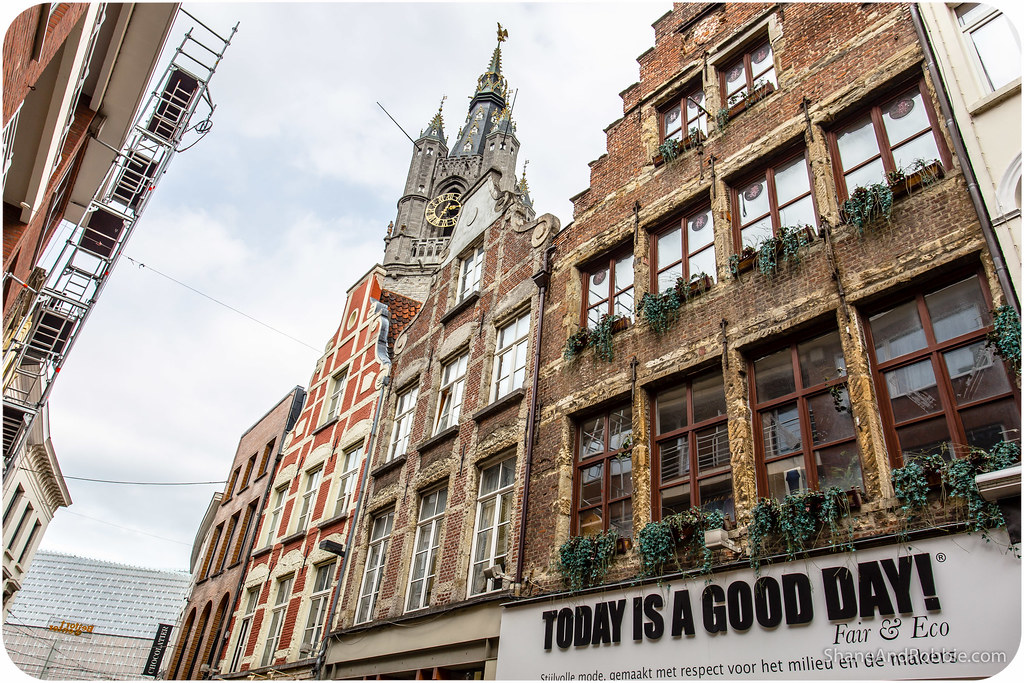 War across Europe, then the discovery of the Americas, and expanding colonisation led to Ghent’s economic decline however. This meant the town’s Medieval architecture was never renewed or replaced, and thus remains beautifully preserved to this day (Ghent was occupied by the Germans in both World Wars but luckily escaped destruction both times). 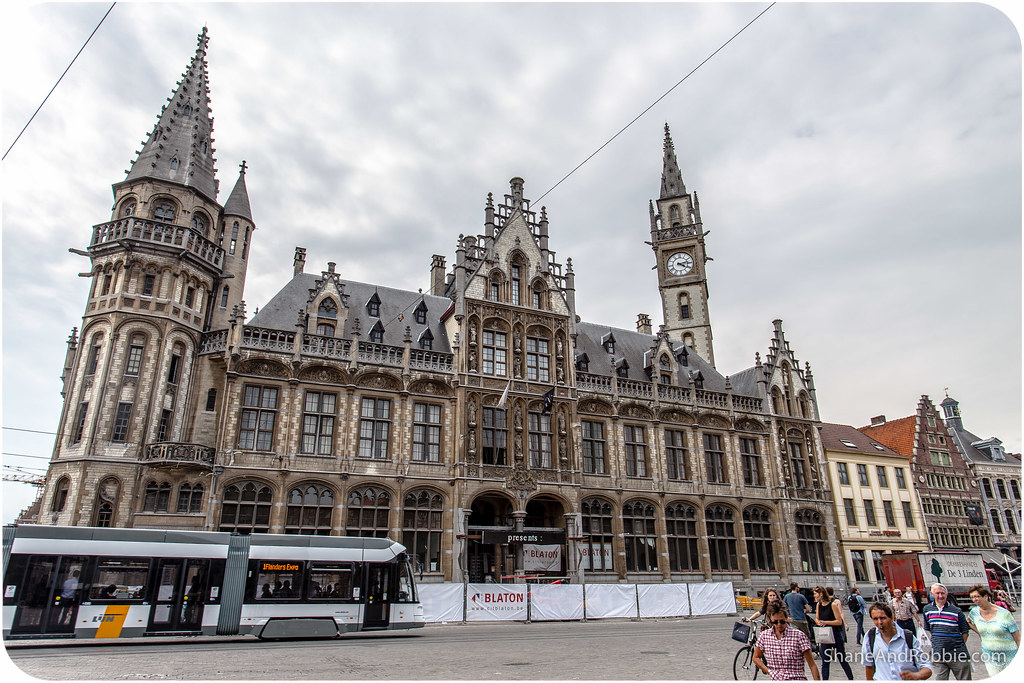 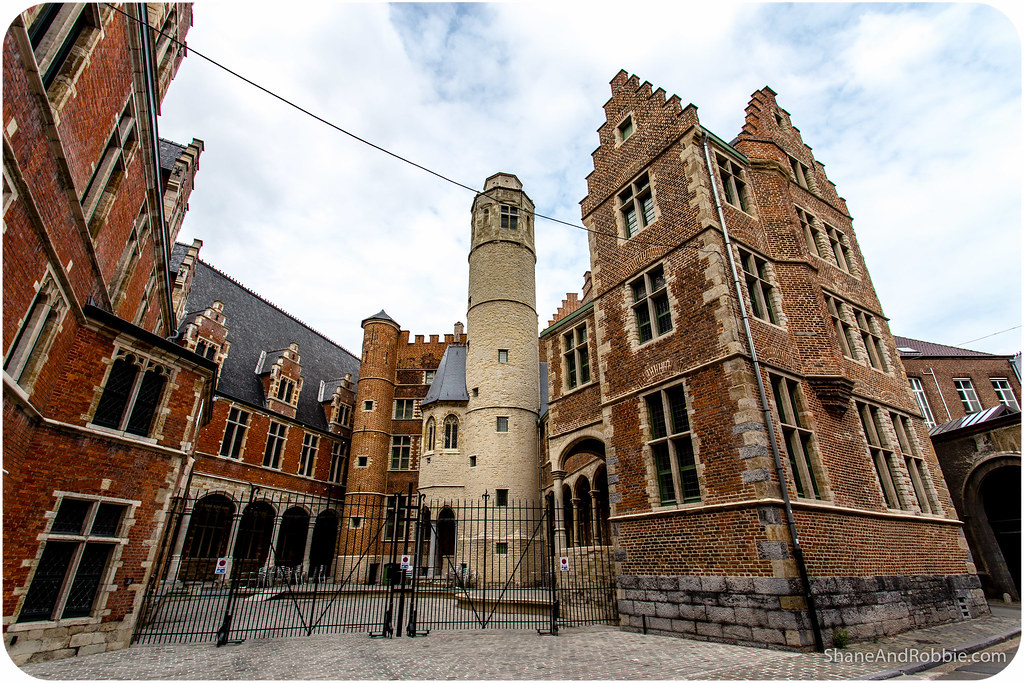 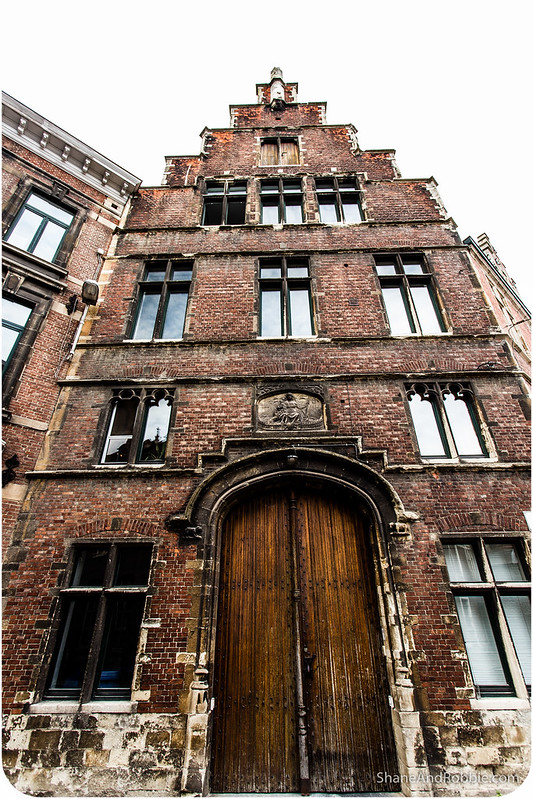 Walking through the centre of the old town today we passed through the former market squares of Korenmarkt and Groentenmarkt, once lined with market stalls but today lined with cafés and restaurants catering for tourists* and locals alike.

*There were a few tourists around today, but nothing compared to Amsterdam or London, which makes for a refreshing change! It’s one of the main reasons we chose to stay here and not in nearby Bruges which, by all accounts, is far more touristy. 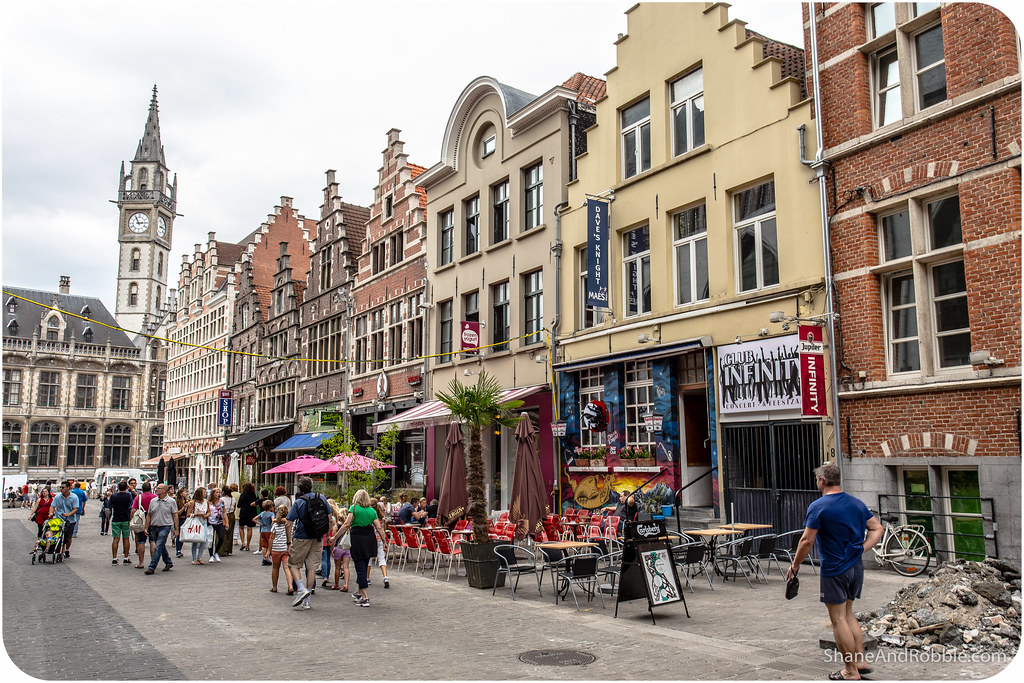 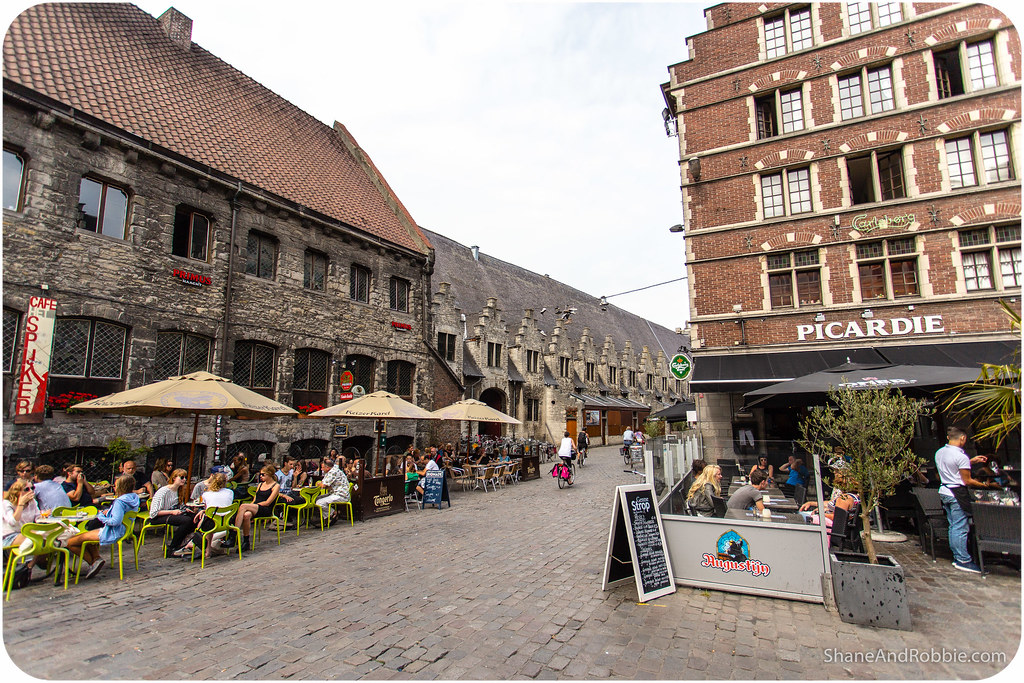 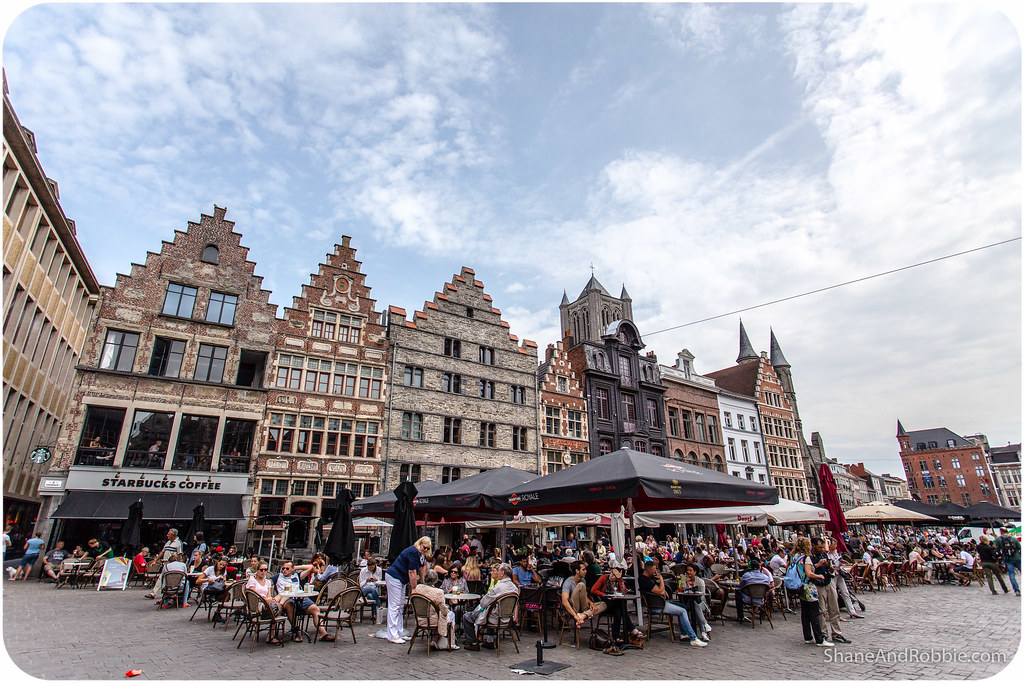 In the town’s large central square we stopped to admire the Lakenhalle (Cloth Hall) and attached belfry. Built in the 1300s and once the centre of the prosperous cloth trade, the Cloth Hall was a prison for a time and is now a museum. 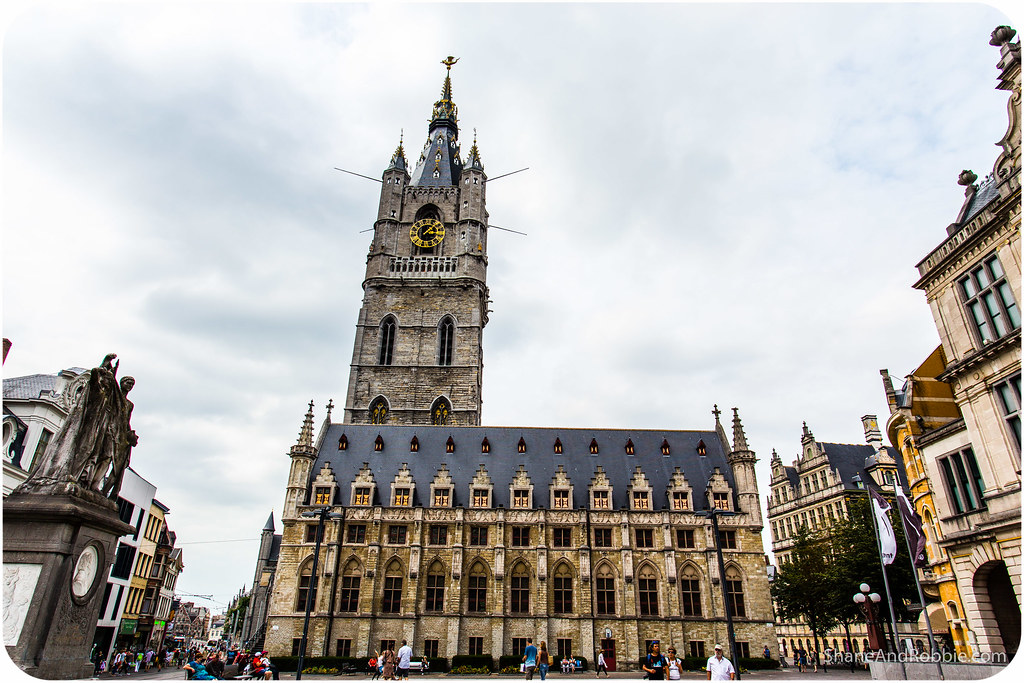 Similarly spectacular in style and architecture were the Stadhuis (Town Hall), and the churches of St Bavo (Sint-Baafskathedraal) and St Nicholas (Sint-Niklaaskerk), all clustered in the centre of the old town. 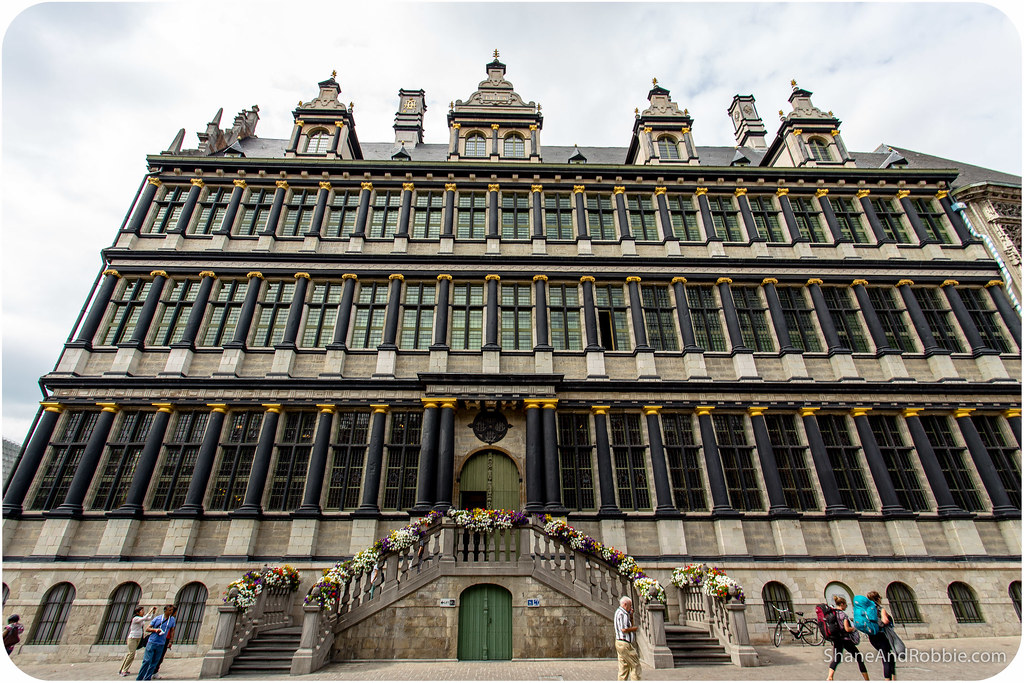 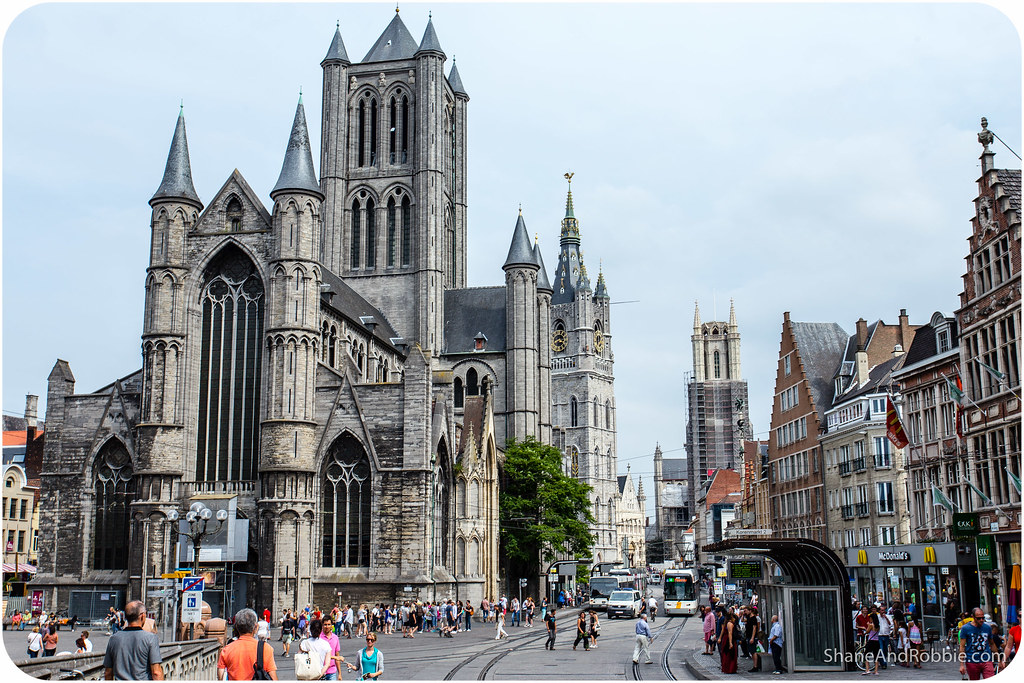 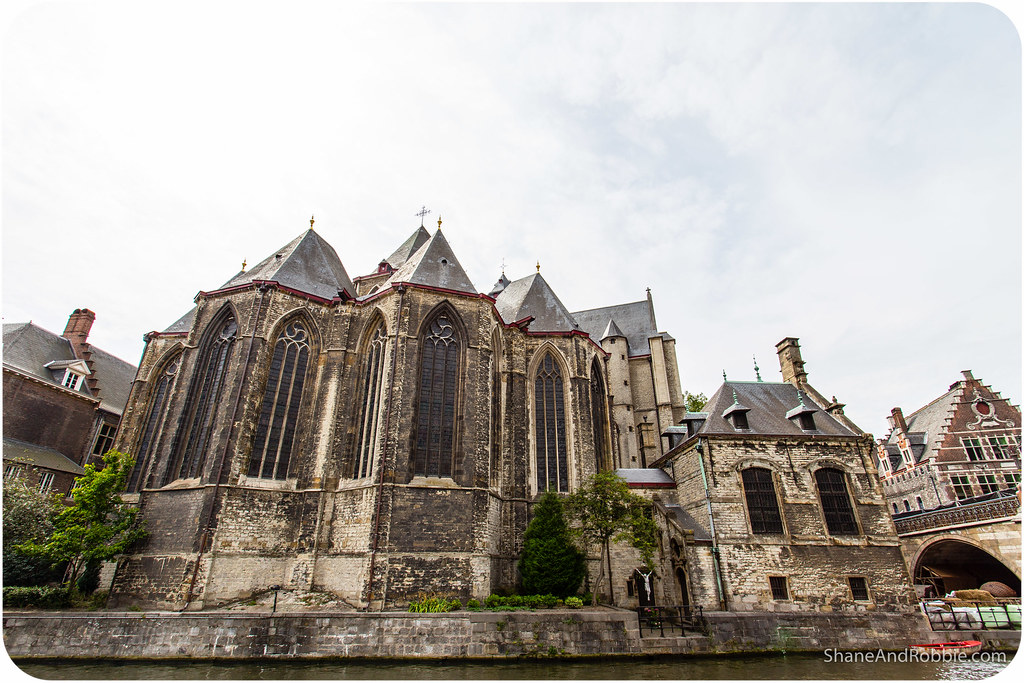 Like Amsterdam, Ghent is criss-crossed with canals (at least in the old town). These were built during the Middle Ages to facilitate the transport of goods and give the town a bit of an “Amsterdamy” feel which is nice. This overall feel is very much apparent around Graslei and Korenlei; once the main ports of the city, these waterside promenades are now one of Ghent’s best features. 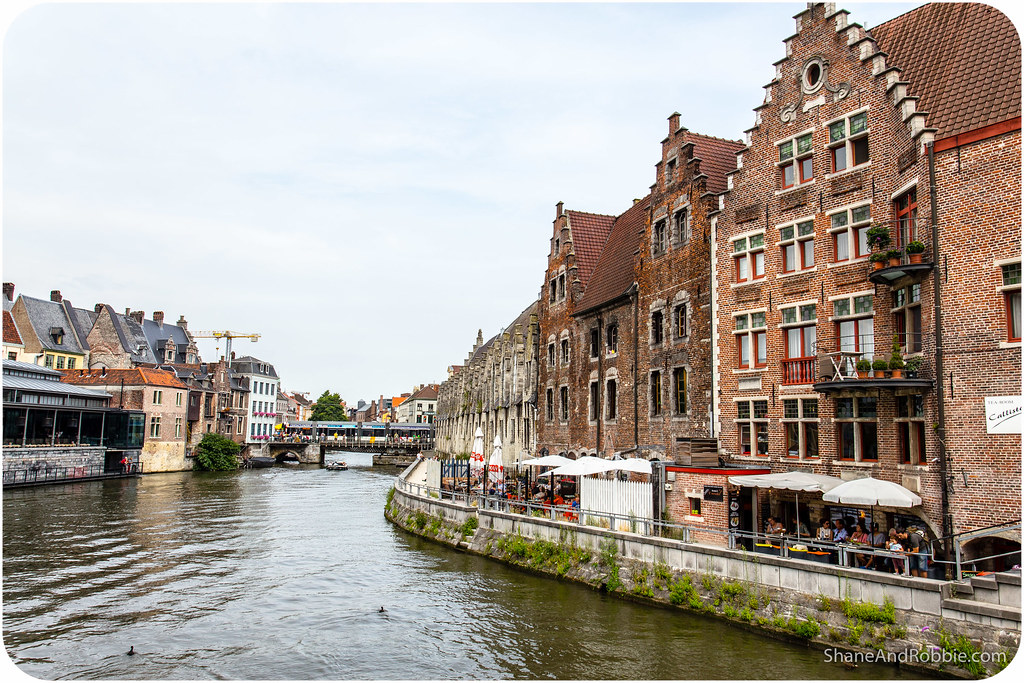 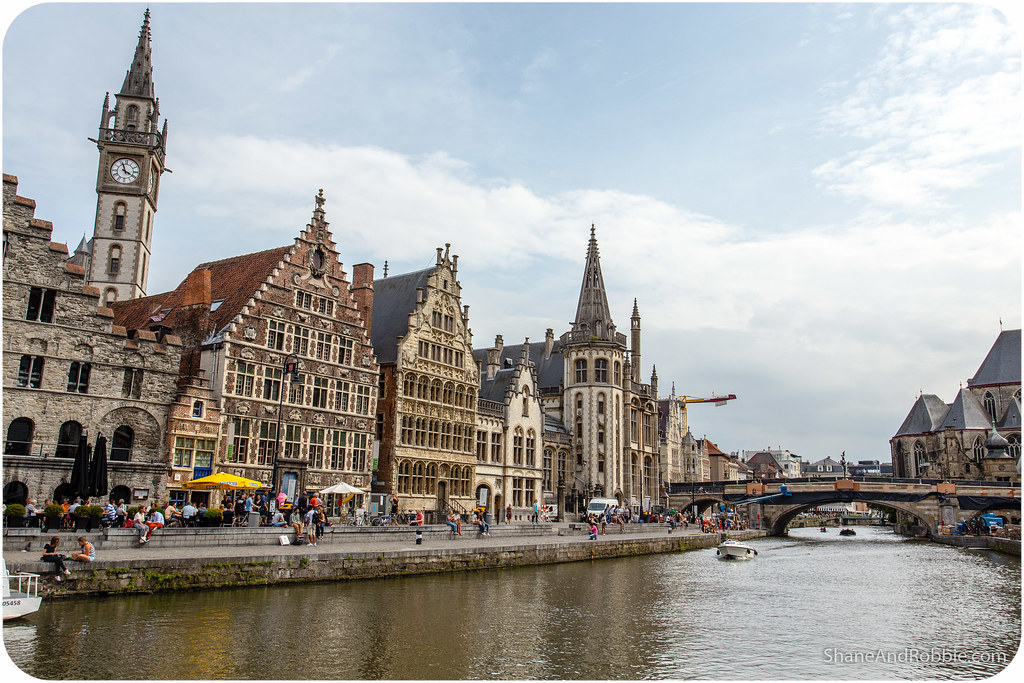 Along the Korenlei Canal we had views of the nobleman’s houses that line the waterway, some of which are hotels now. 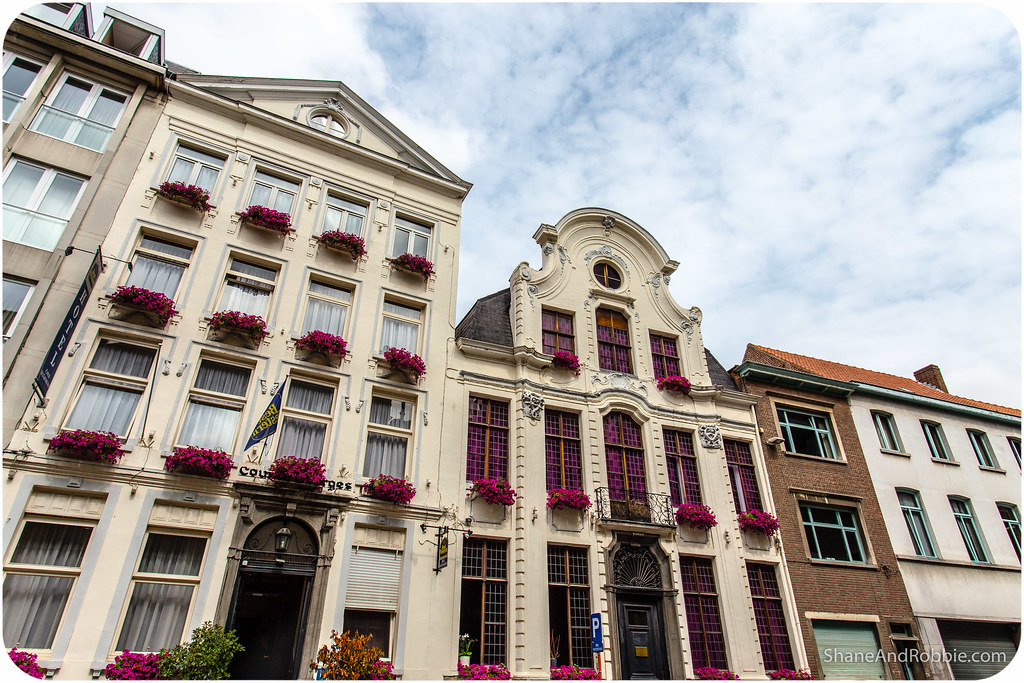 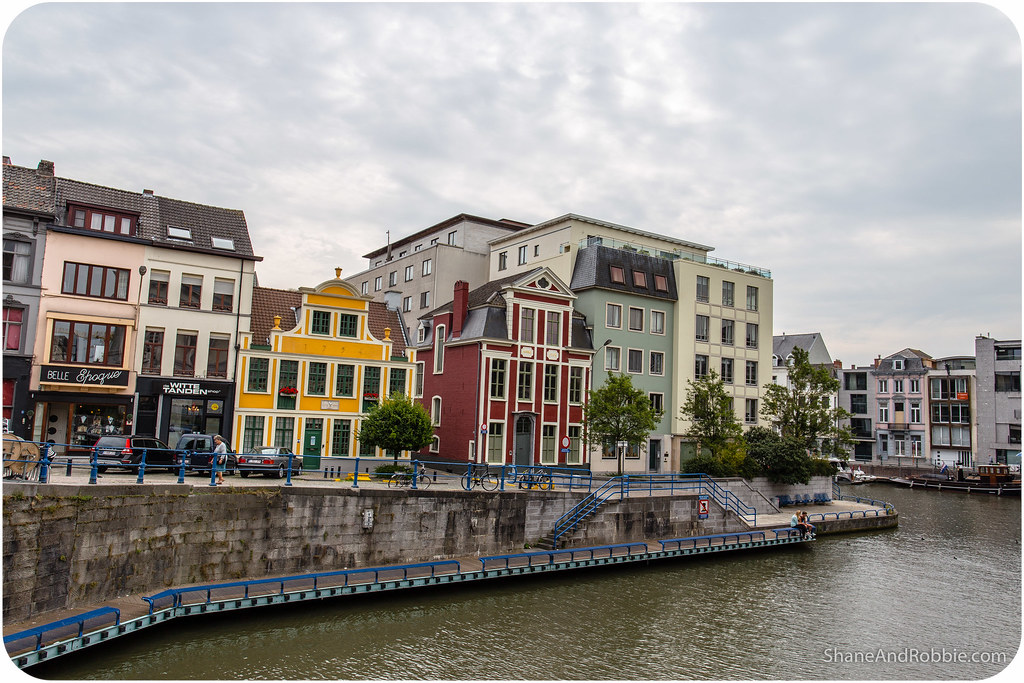 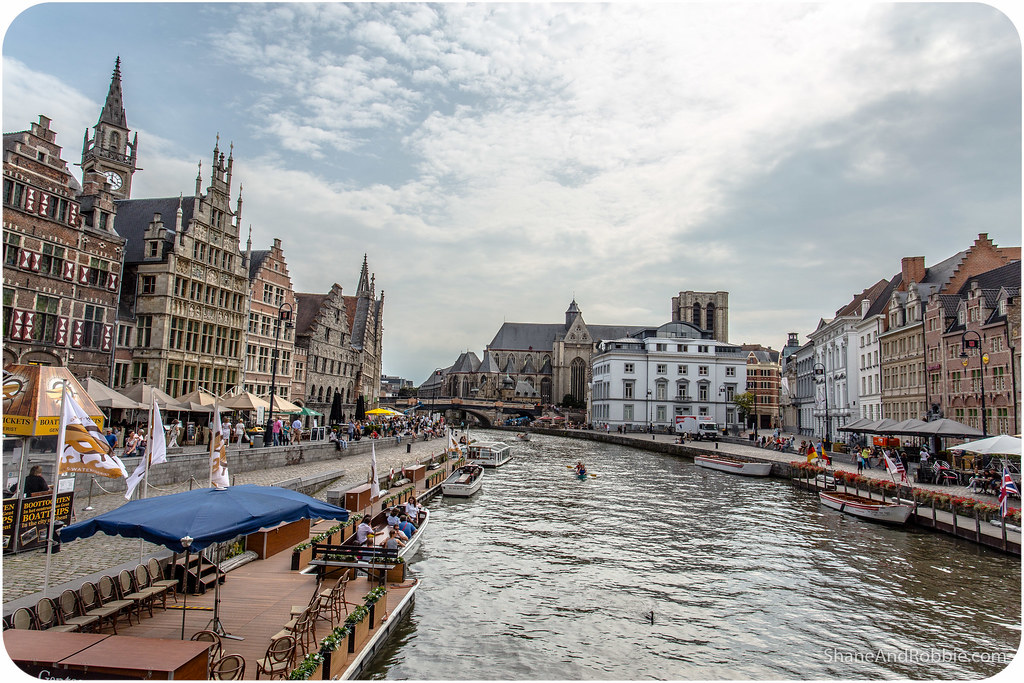 Also situated along a canal we found the Duivelsteen or “Devil’s Castle”, named after its builder and resident during the 13th century: Gerald the Devil. The nobleman Geraard Vilain was given that terrifying moniker due to his predilection for depravity and cruelty. On Gerald’s death the dark grey Gothic building was bought by the city and has since been used as an armoury, convent, school, seminary, insane asylum, and prison. It currently serves as the city’s archives. 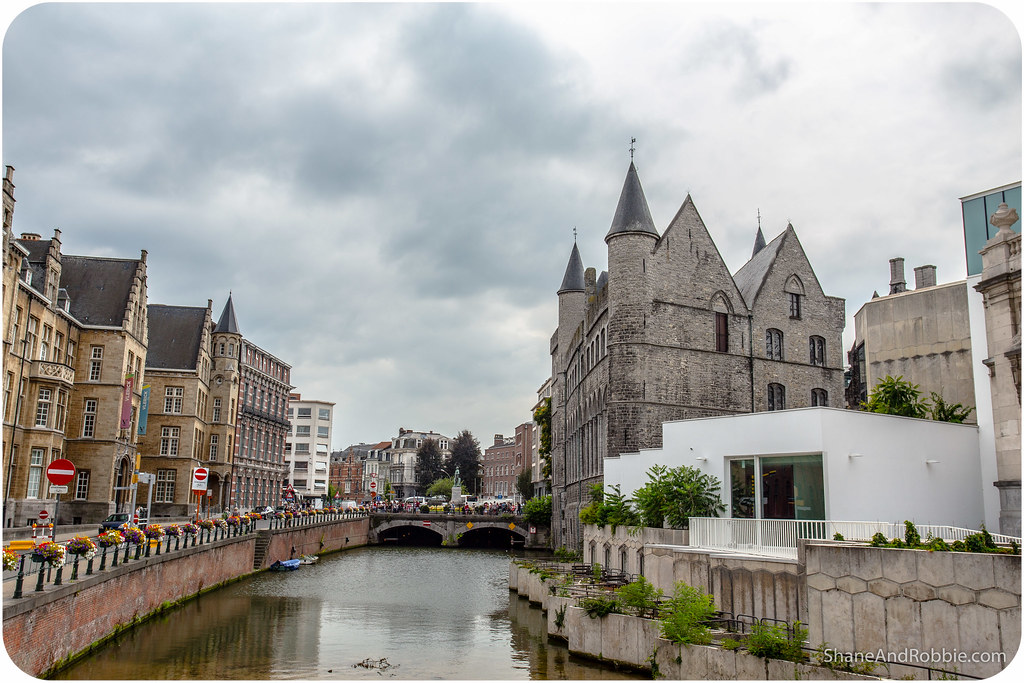 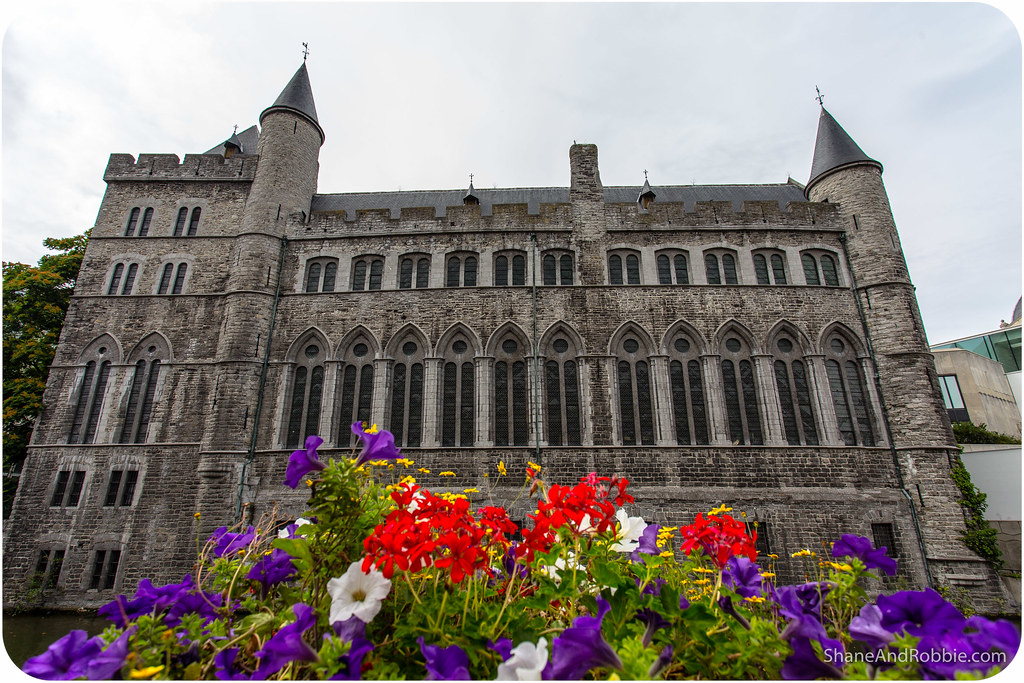 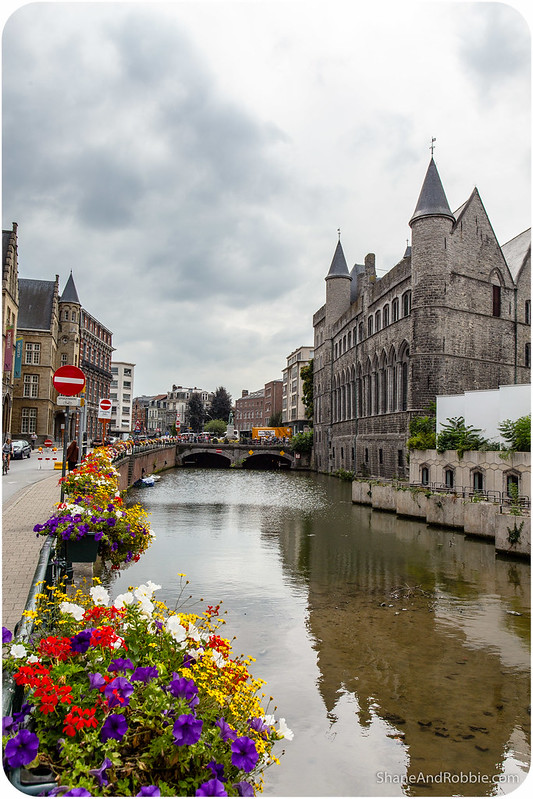 We didn’t go into any of the sites today (we’ll leave that for tomorrow when we’ve got a bit more time), but it was great to get a feel for the city and see some of Ghent’s famed old town. Tomorrow we’ll show you more of this marvellous Medieval centre. Tot de volgende keer! 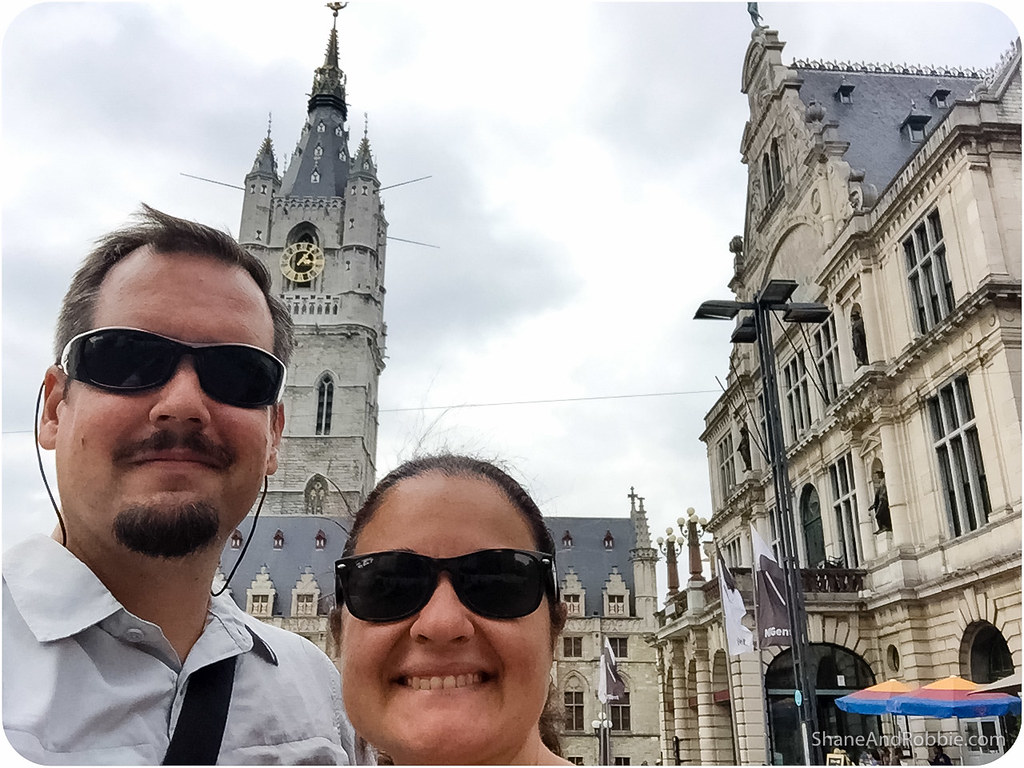