NAMUR EXCUSES – WE HAVE TO HEAD SOUTH…

Leaving Brussels and its gritty inner city vibe behind this morning we found our way to Namur, a small town on just 110,000 people in Belgium’s forested South. We’ve chosen Namur as our base for the next few days as it’s conveniently located near some of the best scenic spots near the beautiful Ardennes hills. The town itself also has an interesting history and a rather grand citadel, perched high on a rocky outcrop at the confluence of the Rivers Sambre and Meuse. Sounds like a good place to stop for a few days right? 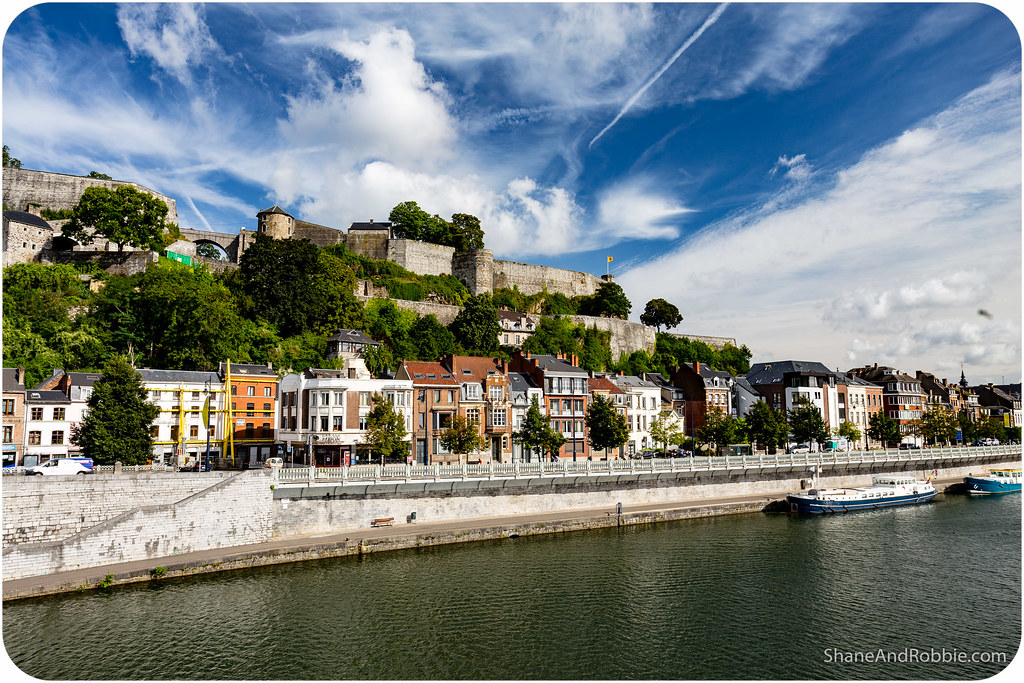 The Ardennes is a region of leafy forests, river valleys, and rolling hills in Southern Belgium. This is the greenest part of the country and has a reputation for being very scenic and pretty, unlike much of the countryside in the industrialised Northern parts of Belgium we’ve been in most recently. We’ve not seen much of the hills so far, but certainly the views from the train got a bit more interesting the further South we headed. The flat plains we’d become accustomed to through the Netherlands and Flanders gradually gave way to hilly farmland and forest, which was actually a nice change. 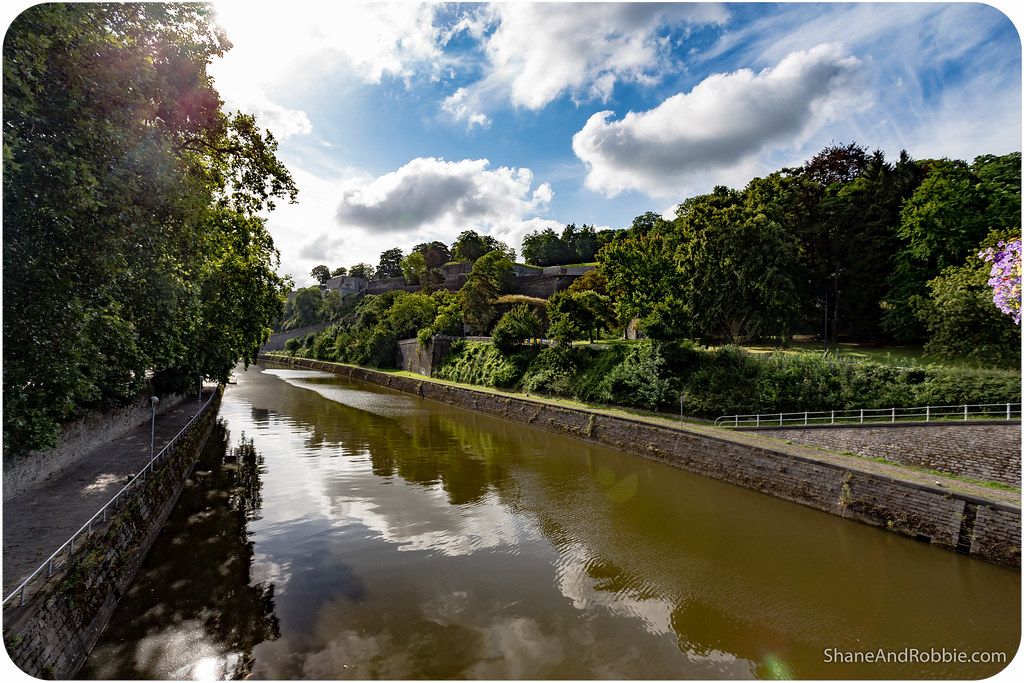 Within an hour and a half we had reached Namur* and, keen to explore the town, we dropped our bags off and headed straight out. The city streets we encountered were pretty clean and orderly, especially compared to inner city Brussels, if a little quiet. Seems Namur is a small enough town that most shops shut at lunchtime on Saturday and don’t reopen until Monday morning!

*Belgium is pretty small – none of these intercity trains journeys take very long at all! 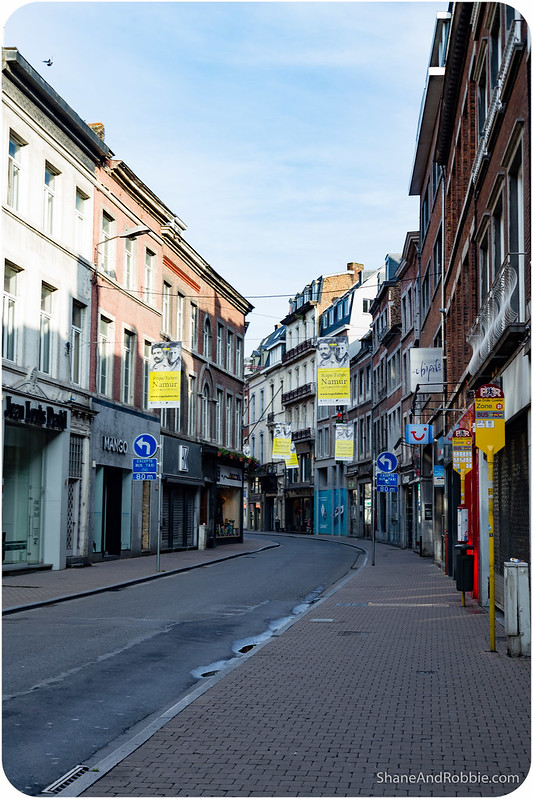 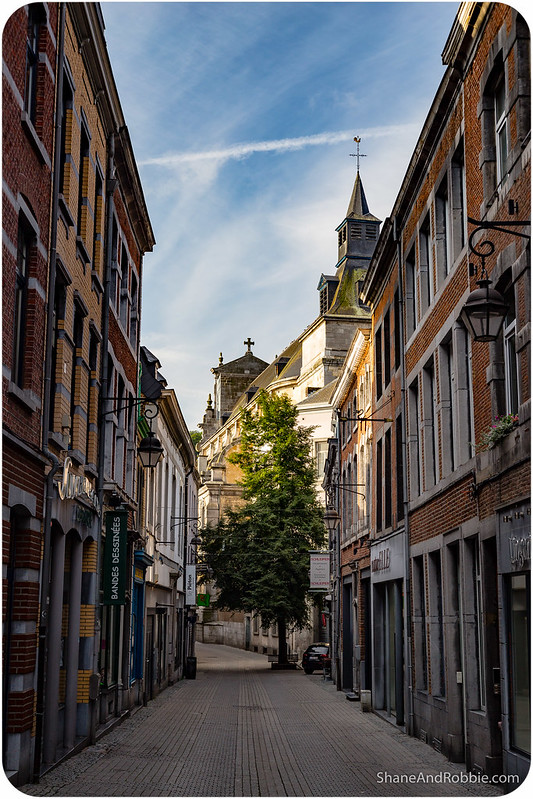 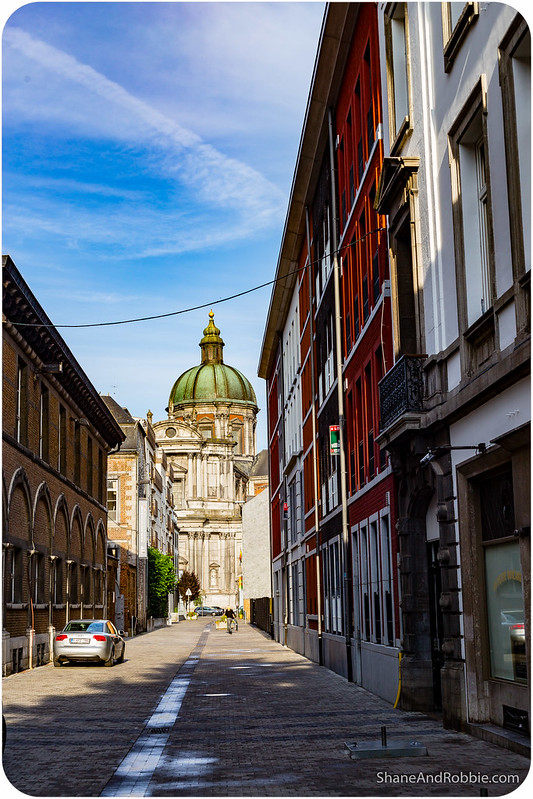 Despite being the capital of Wallonia (the French-speaking part of Belgium), Namur is actually quite small, so it wasn’t long before we found ourselves in the heart of the city, at Place d’Armes. This central square is surrounded by beautiful old buildings and made for a good lunch stop. 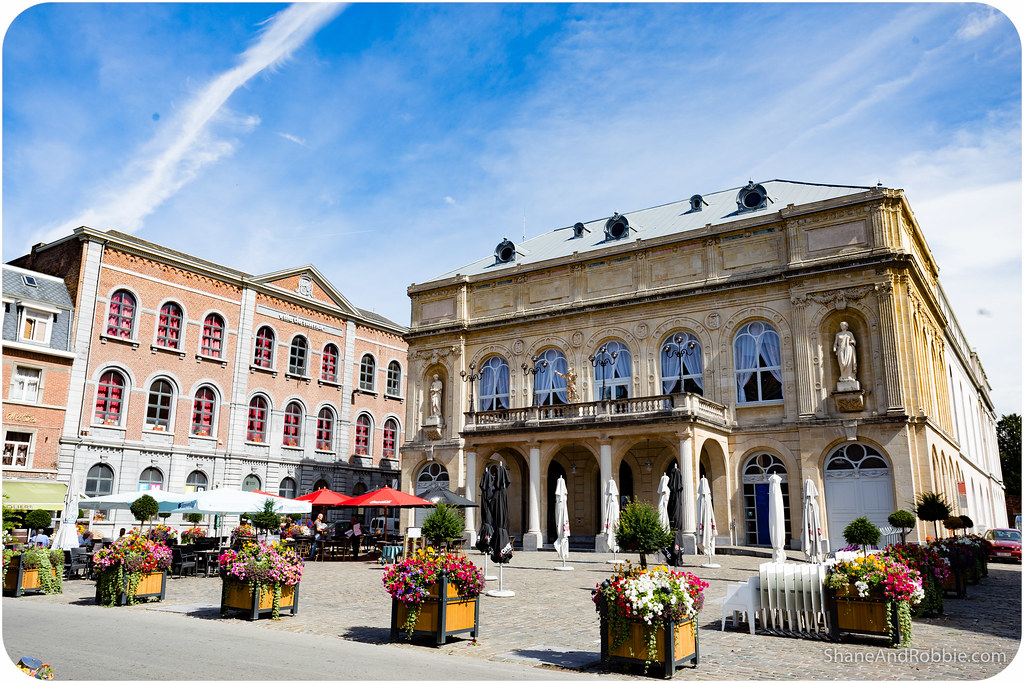 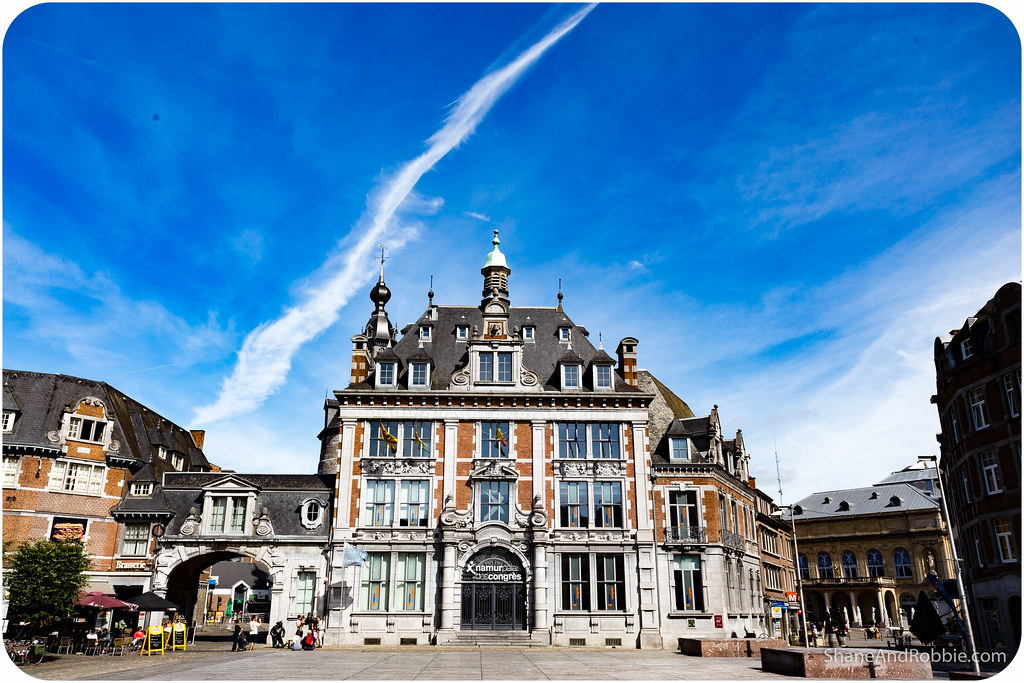 Continuing on through town we came across the town’s main cathedral, St Alban’s Cathedral (which was closed at the time unfortunately), and the oldest remaining building in town: the 15th century Meat Hall (once used as for storage and as a market hall,  now home to the tourist information centre – also closed). 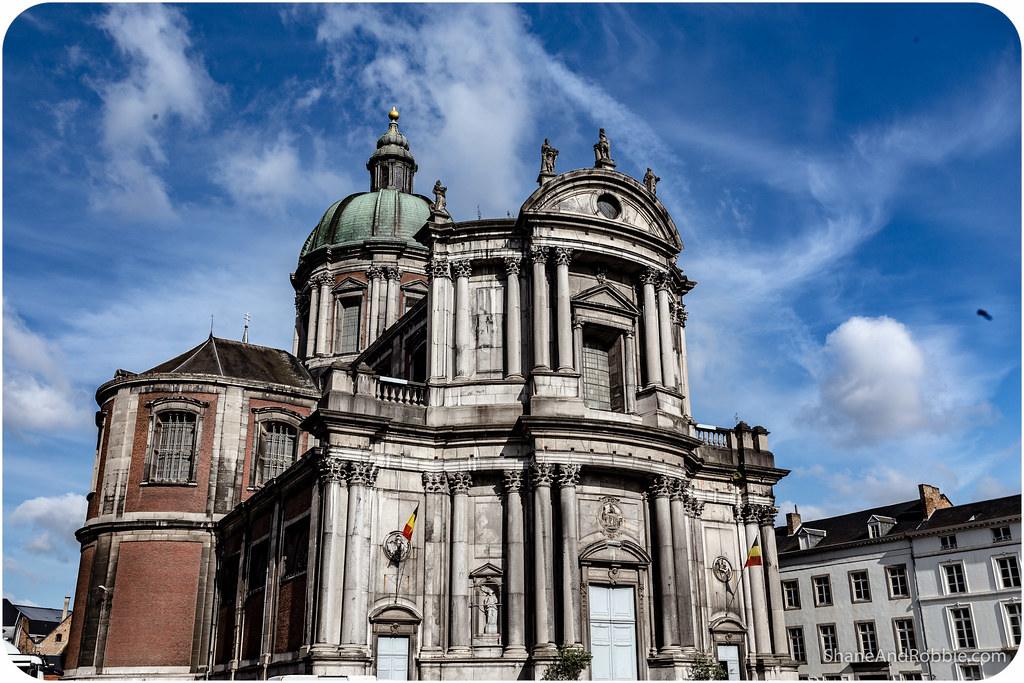 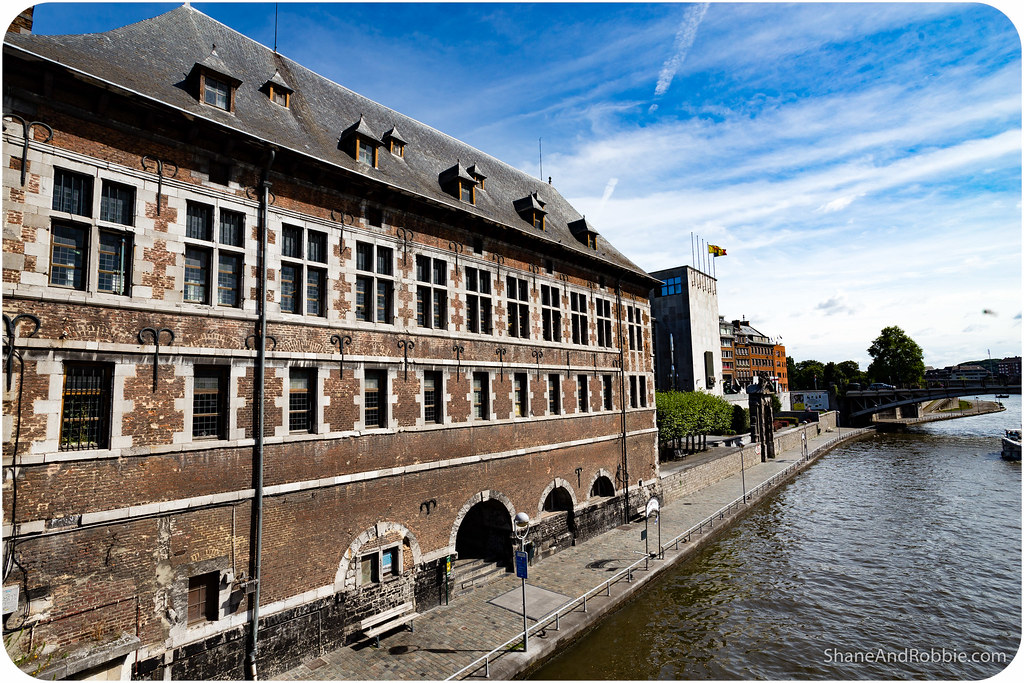 There aren’t too many old buildings left in Namur beyond these few as the city was heavily bombed during both World Wars, so what’s left is quite modern. It’s still quite a pretty town, though, and being a city built between 2 rivers, it is unsurprising that we found the prettiest part of Namur along the waterfront. We spent quite a while strolling along the banks of the Meuse and Sambre rivers, enjoying the sunshine and wondering where on earth all the people were?! We expected Namur to be a bit quieter than the far more touristy Ghent and Bruges; and sure, the city is home to almost 20,000 university students during the scholastic year and maybe with it being holidays, that could explain some of the tranquility. But it was so quiet that it was almost eerie*….

*We have since found out that most of Namur’s permanent residents are on holiday themselves, it being peak school holiday season here in Europe. There are lots of shops with signs up saying “Closed ‘til end of August”, etc. Nice for them! It has made our time in Namur a bit weird though as we feel like we’re just about the only souls alive in a virtual ghost town. Pencil that in for next time: beware August holidays when travelling Europe. Cities empty but the beaches and lakeside resort towns fill to the brim! 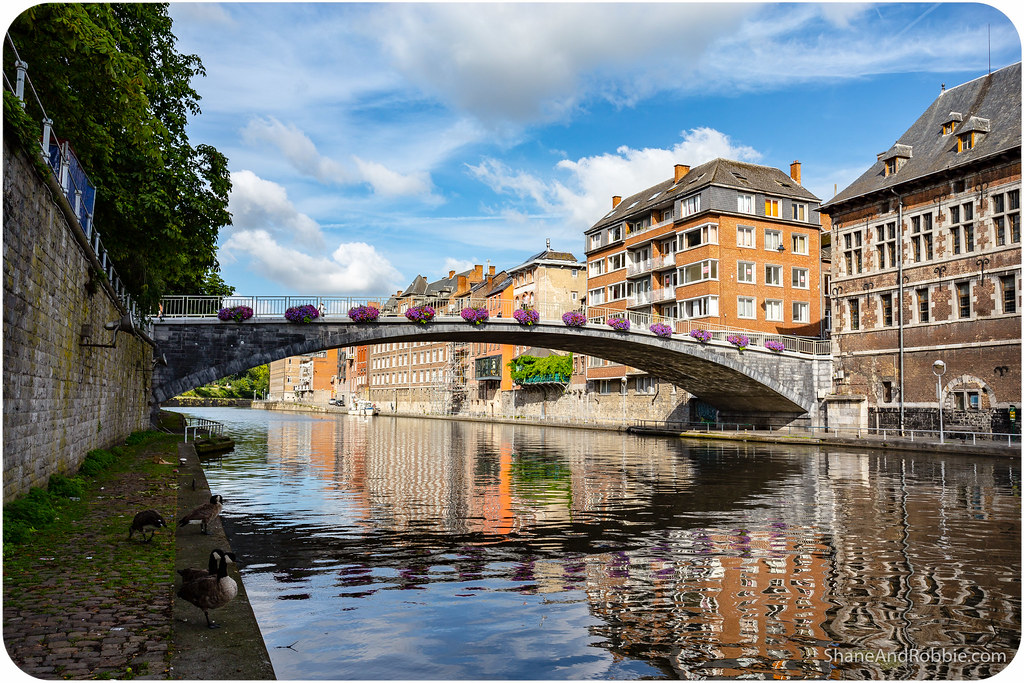 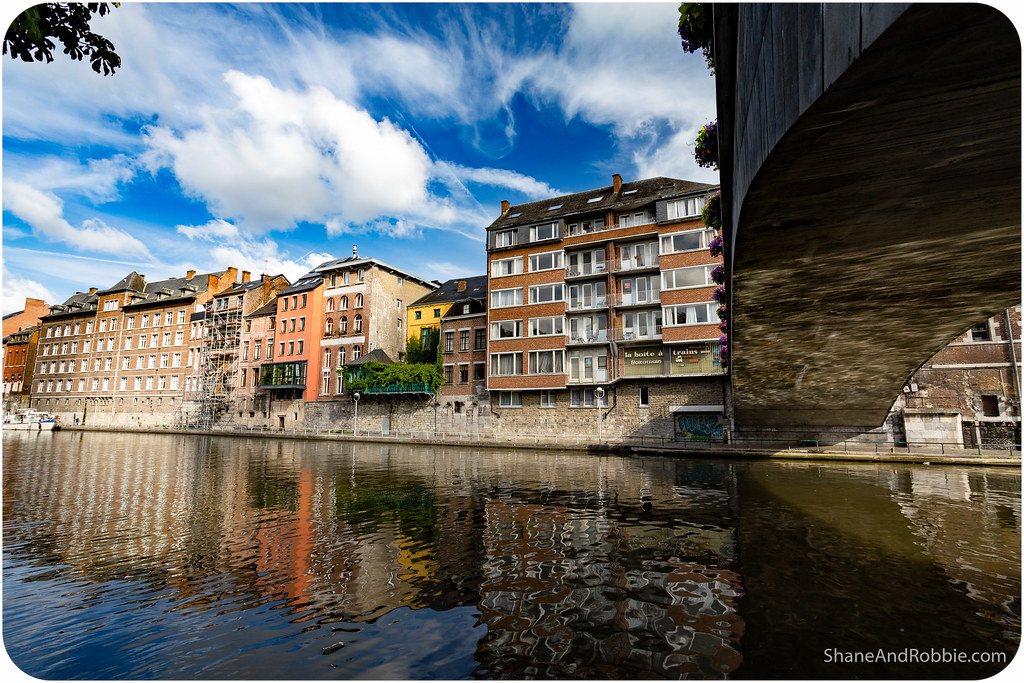 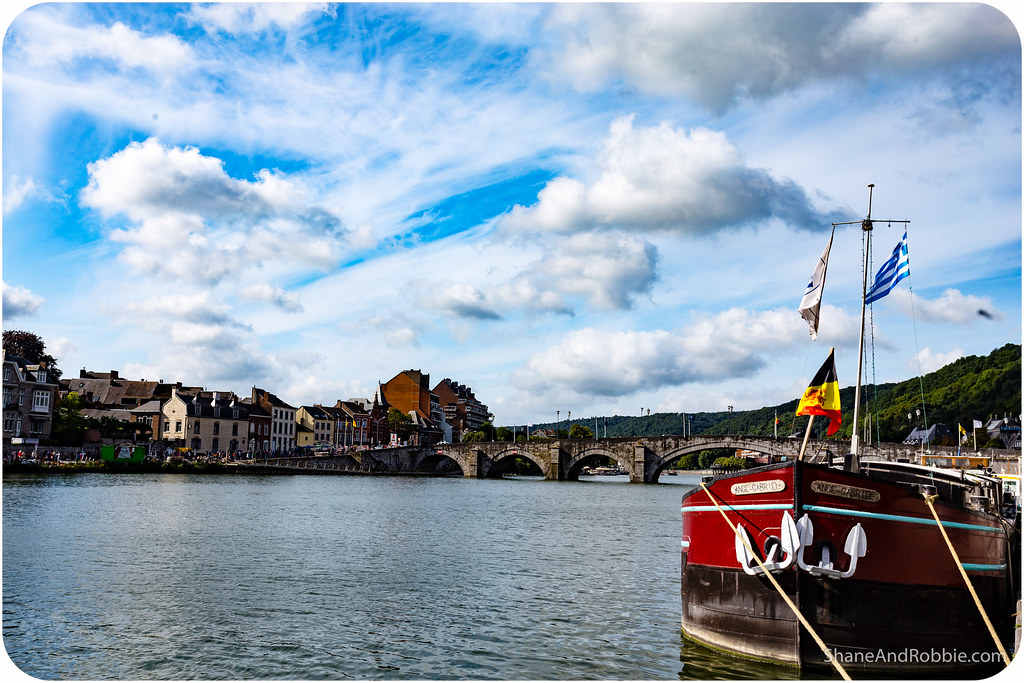 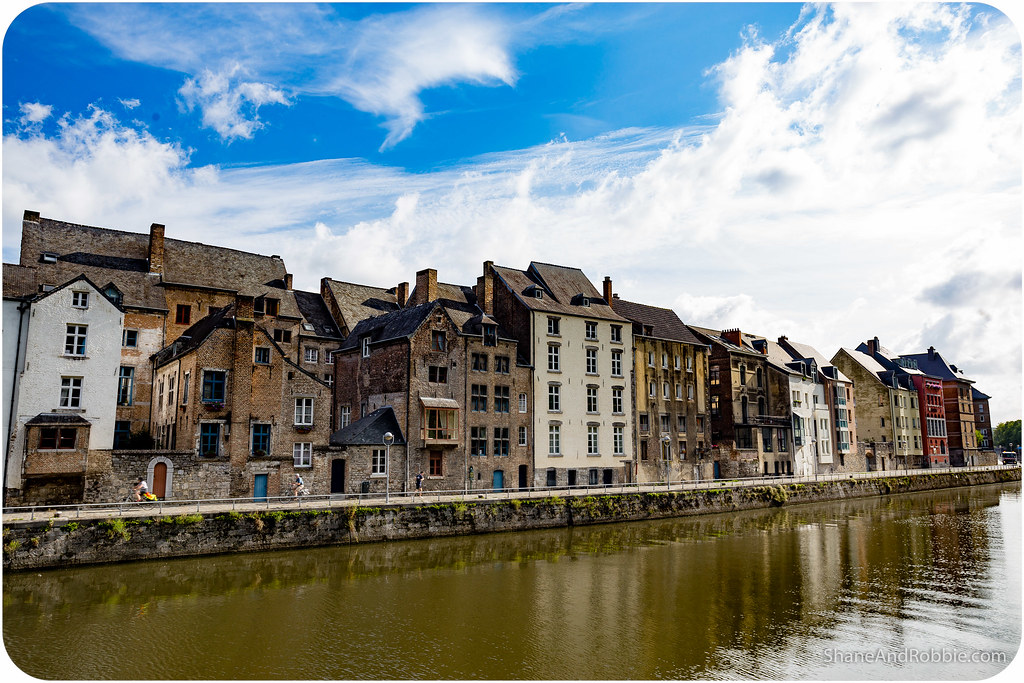 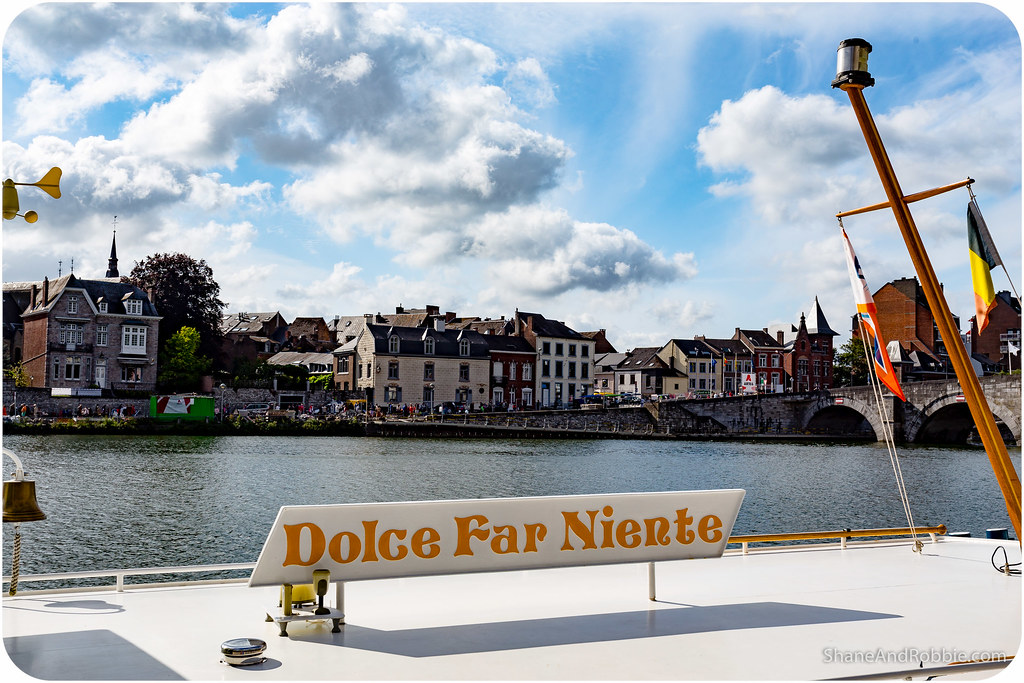 After a few hours exploring we decided that Namur’s greatest gift, however, is its Citadel. Perched atop the towering cliffs of the Grognon (i.e. the limestone plateau at the confluence of the rivers Meuse and Sambre), the Citadel towers over the rest of the town. 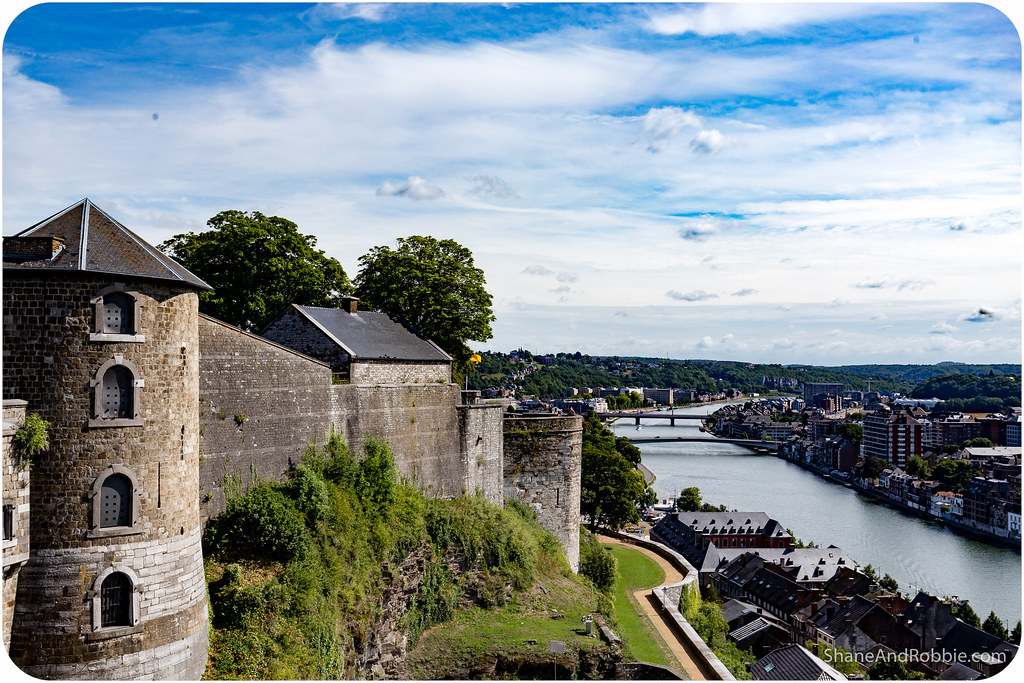 The Citadel is an immense fortress, occupying the entire top of the Grognon plateau. Due to its strategic location, overlooking the rolling hills to the North and controlling both rivers, the Citadel has been fought over, attacked, besieged, rebuilt, and extended numerous times over the past 2,500 years. 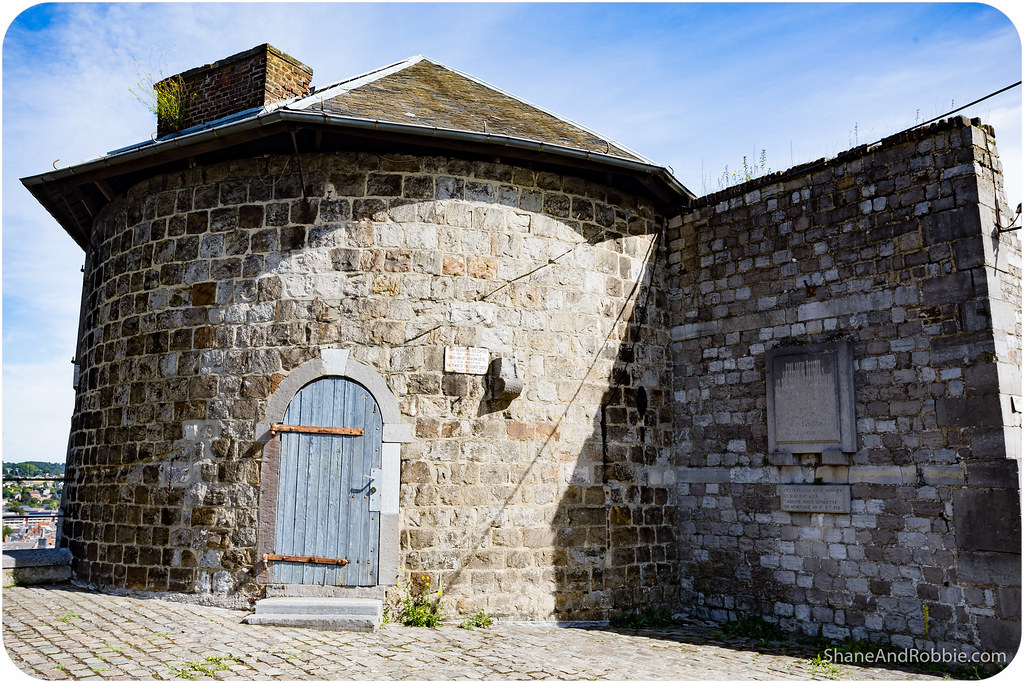 The earliest records of a fortress at the Grognon go back to the Iron Age, when the Celts built a stronghold here; it was reckoned to be one of the largest fortifications in Europe at the time. The Romans eventually made it their own, after defeating the Celts of this region in 57AD. After the Romans came the Gauls (it was the Gauls who gave Namur its name, as the settlement was first named after their god of war, Nam). As the Dark Ages gathered, the Merovingian kings built their own fort here in the 7th century. 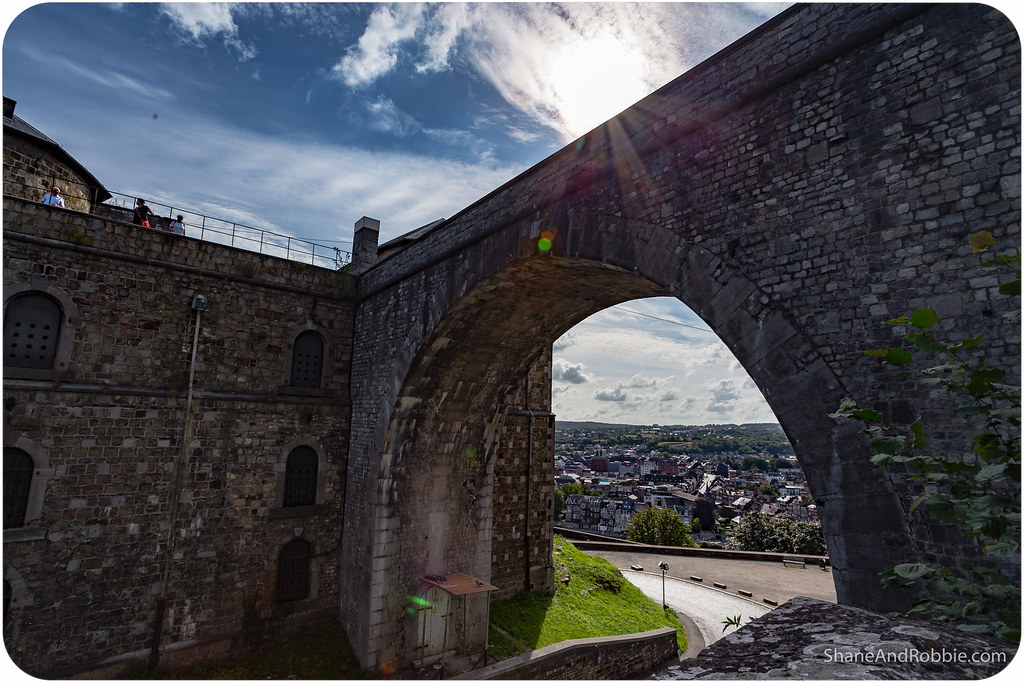 Given its strategic location as one of the few point where the rivers could be crossed to reach the riches of Bruges, Ghent and Brussels, as well as its own wealth as a trading town, the next few centuries saw Namur become a succession of armies focus their attentions on Namur. The French, Spanish, Dutch, then the French* again – they all controlled the city for a time and used it as a military outpost, adding the Citadel as they went.

*When the French were finally kicked out of the region, following Napoleon’s defeat at Waterloo in 1815, Namur became part of, first, the United Kingdom of Netherlands, and then of the newly-risen Belgian nation, in 1830. 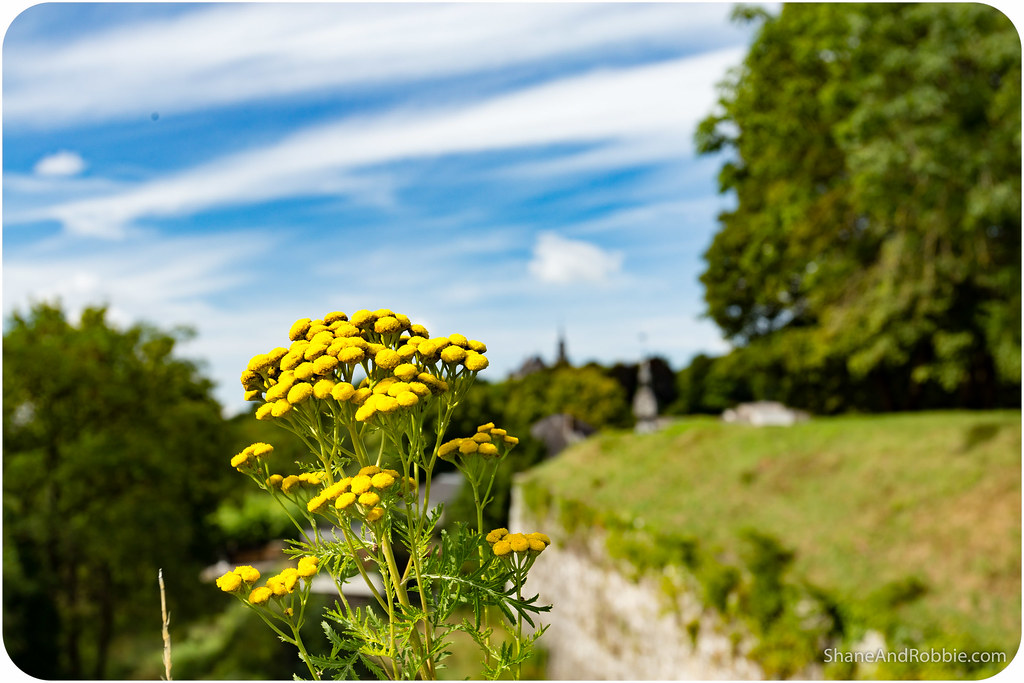 Today peace reigns over Namur and the Citadel is really just a pretty place to go for walks through the forest and a great vantage point from which to admire the scenery. We spent most of our afternoon up in the Citadel, enjoying the views and the sunshine. 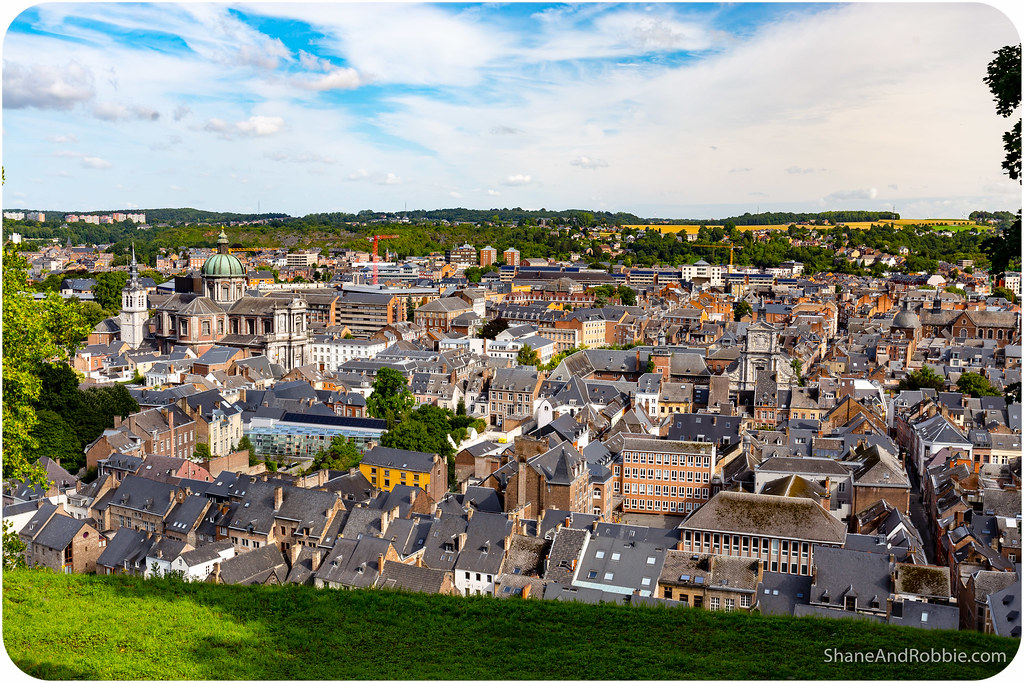 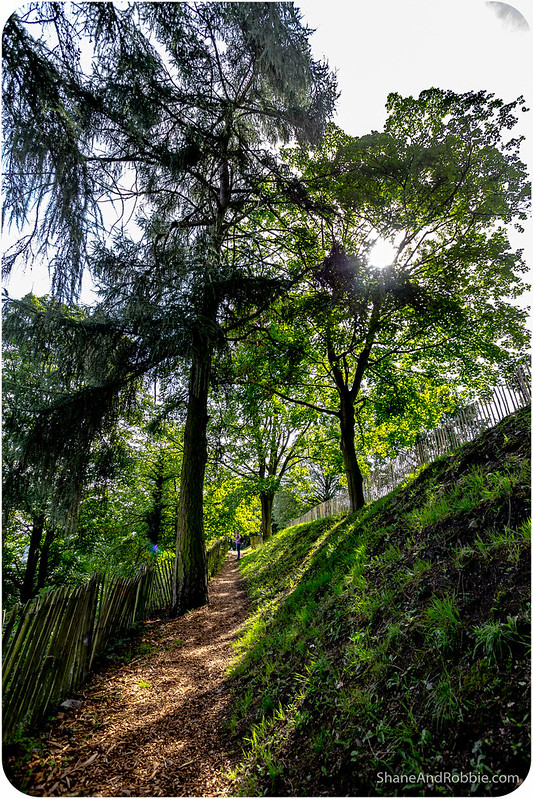 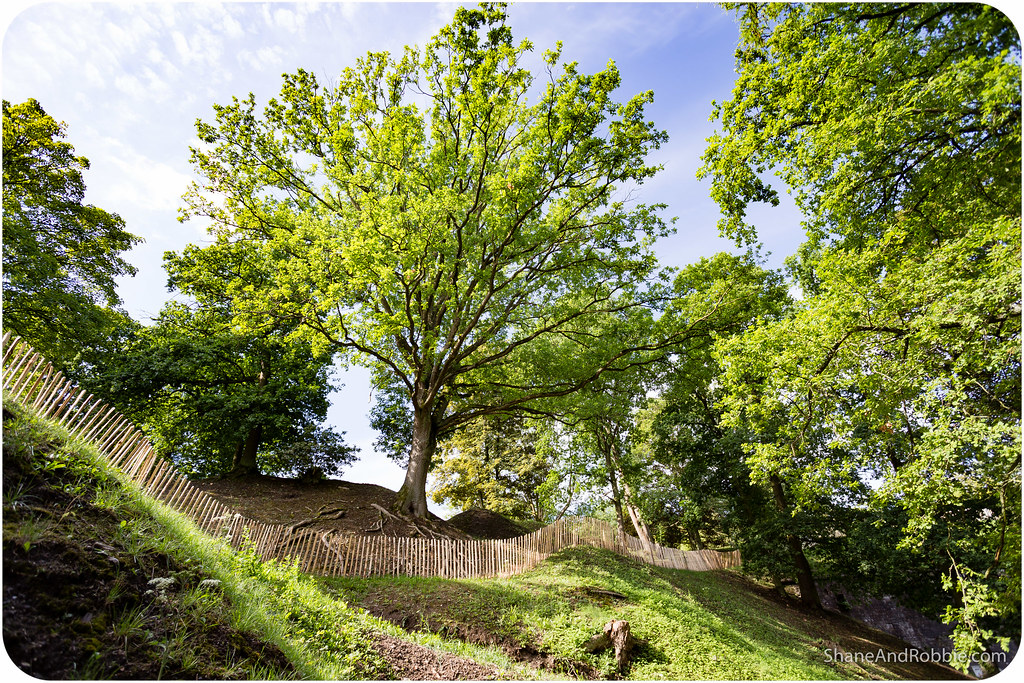 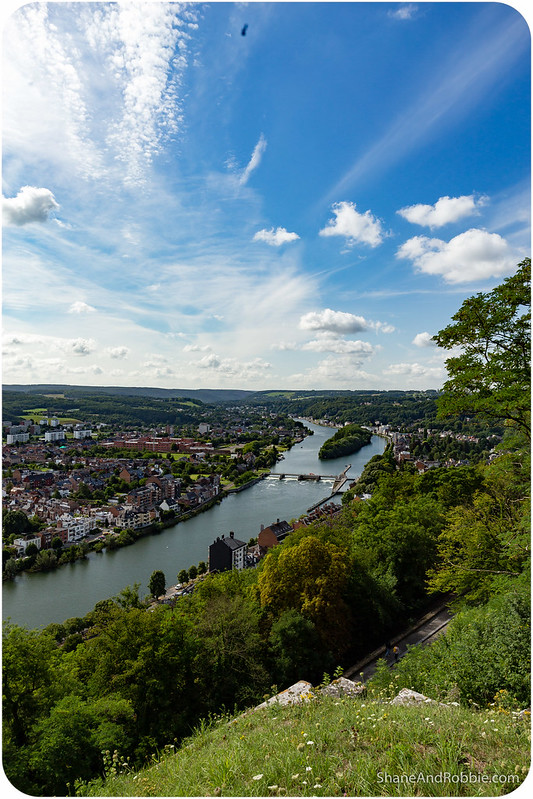 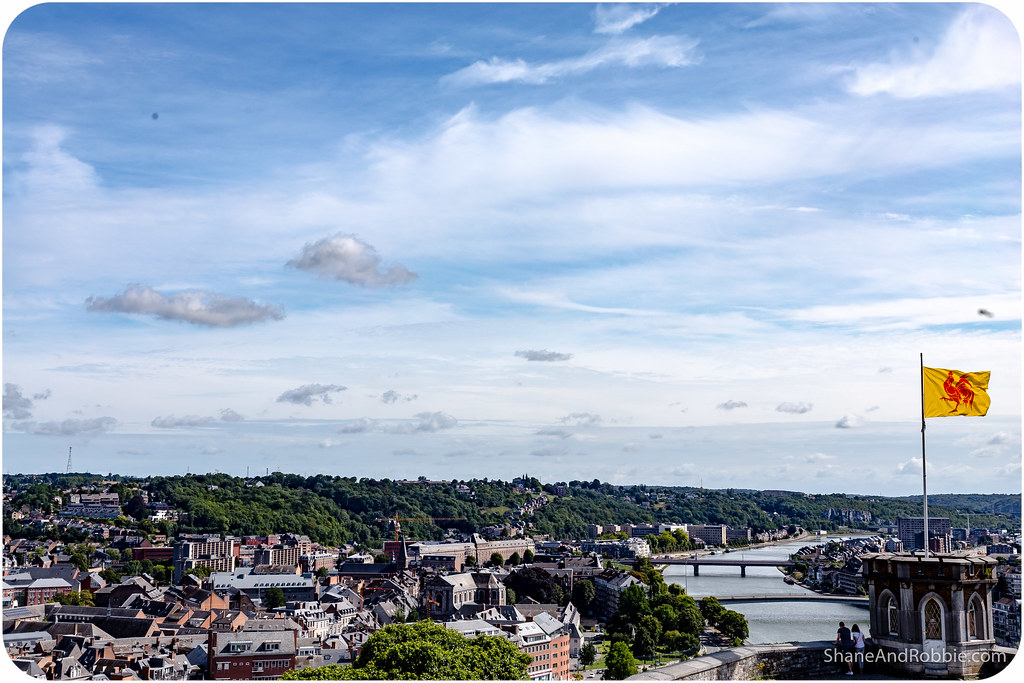 On our way around the Citadel we came across another of Belgium’s weird and wonderful statues: a giant turtle with a guy on its back. Turns out this is an art piece entitled “Searching for Utopia”, by the Belgian artist Jan Fabre. Glinting in the sun, it was rather glorious in its strangeness. 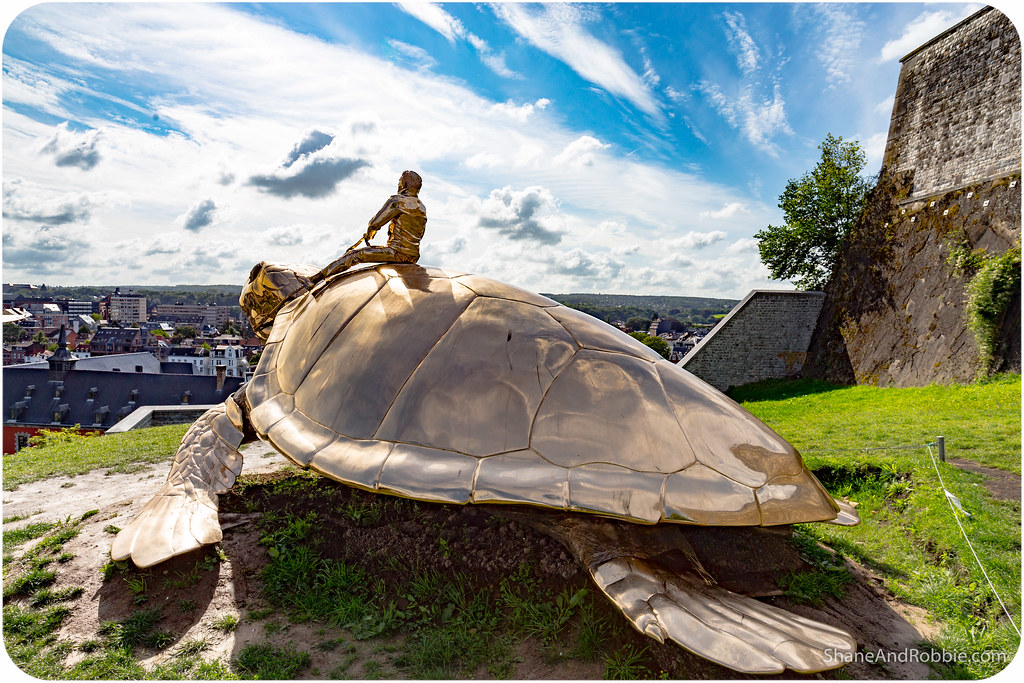 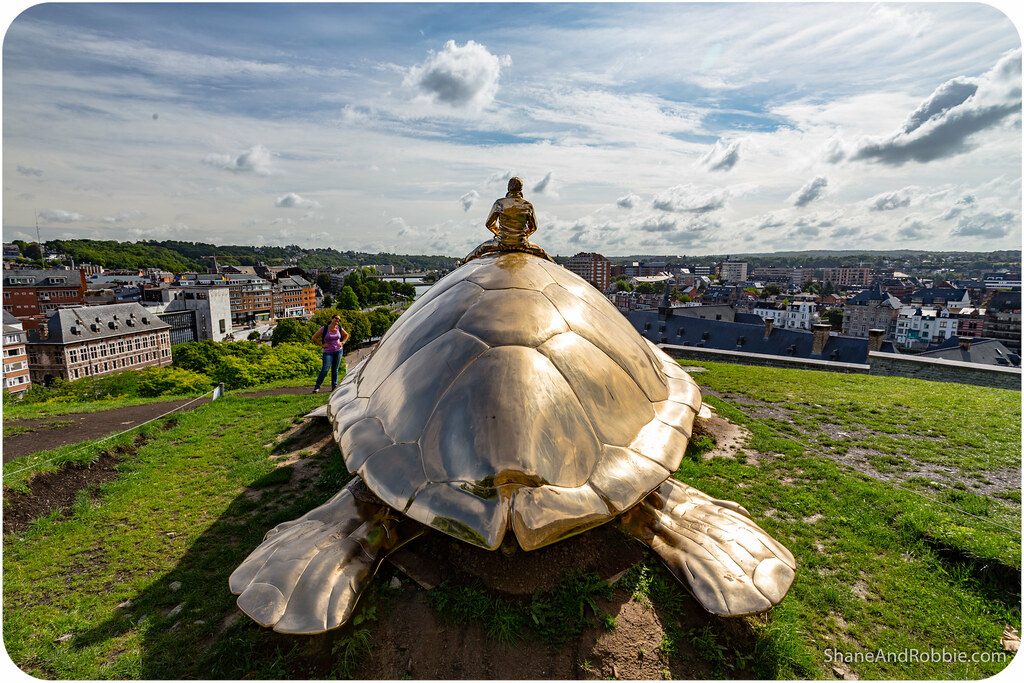 And so, having done our exploring, we can attest that Namur is a nice little city. It lacks the grandeur of Brussels, and the extensive old town of Ghent or Bruges, but it seems like a nice enough town to spend a couple of days in. It’s also a great spot from which to explore some of the beautiful valleys and hills of the Ardennes – which is where we’re headed tomorrow! 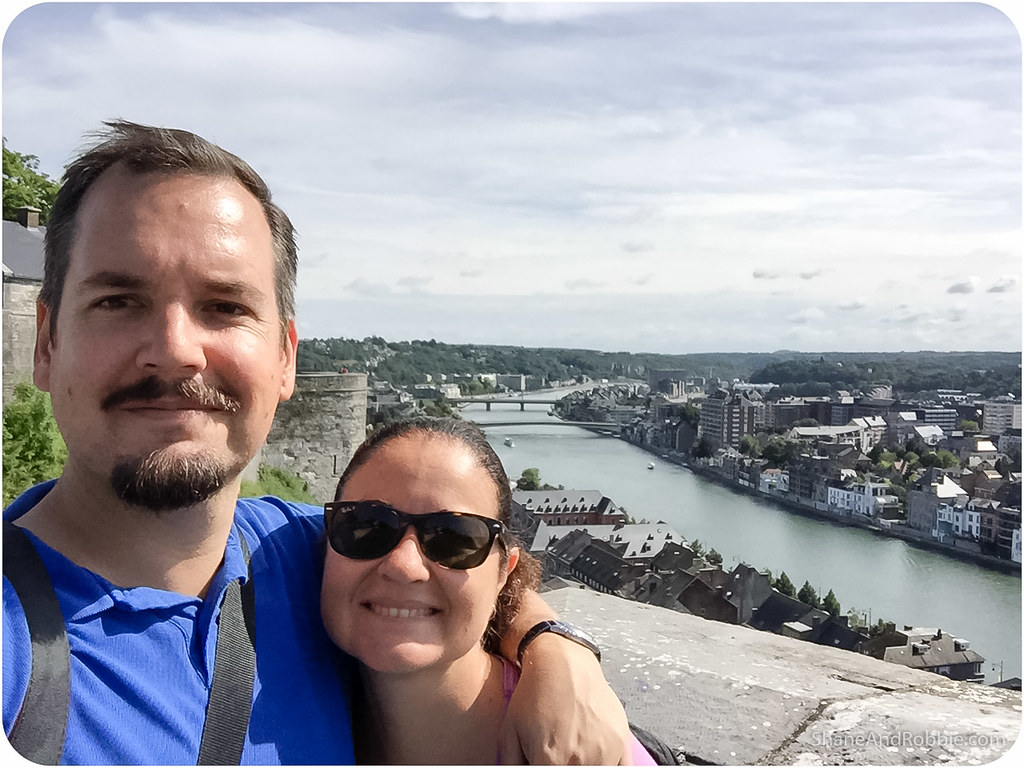