LIVING THE LIFE OF LUXURY IN LUXEMBOURG

We knew we’d crossed the border this morning when the graffiti petered out, the towns started looking so much cleaner, and the cars on the roads got fancier. Yup, we left Belgium behind and crossed into Luxembourg today and the difference is quite astounding. Gone is the awkwardness and discomfort we felt in Belgium, replaced instead with our more usual sense of joy and excitement at being in a new country! So far Luxembourg is proving to be a great little place, and we can’t wait to see more. 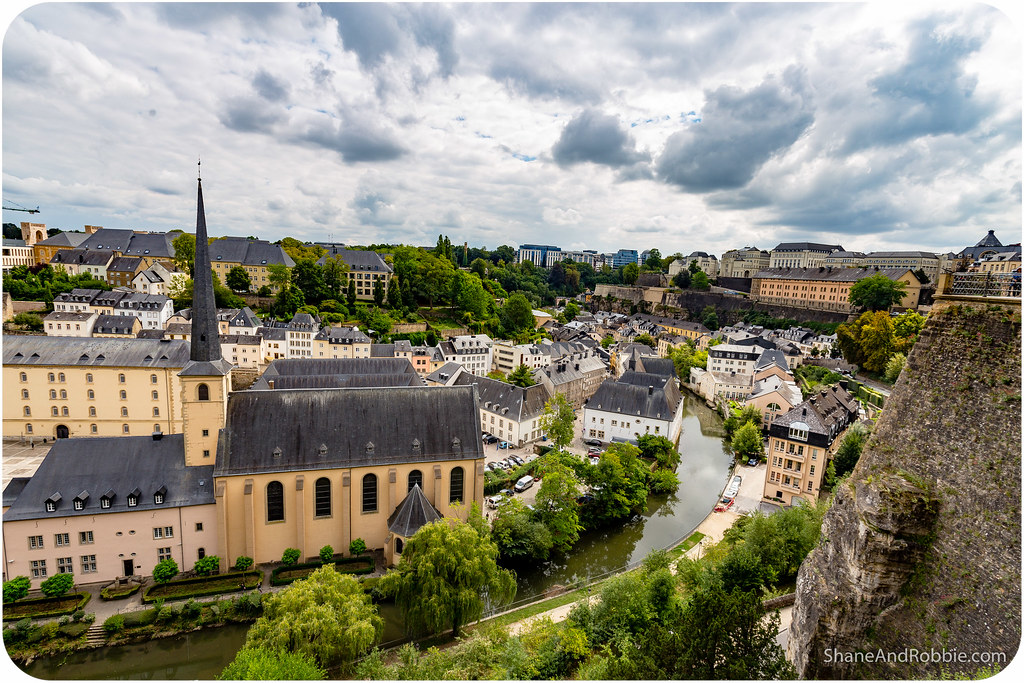 Often eclipsed by its larger and more illustrious neighbours, Luxembourg forms the last of the famed BeNeLux triad and is reputed to be one Europe’s prettiest little* countries. With a population of just over 500,000, it’s also a rather rich little country, boasting the world’s second highest per capita income** (only Dubai’s is higher). Walking through the nation’s capital, Luxembourg City, today we noticed the wealth in a myriad of little ways: the clean streets, the lack of graffiti, the haute couture shops lining the streets, and the abundance of flashy cars (think Porsches, Ferraris, and the like). Not that things are overly pretentious, there’s enough “normal” people, cars, and shops around that it just feels like we’re visiting the “nice” part of town.

**Banking, finance, and insurance account for the majority of economic output – Luxembourg is the world’s second largest investment fund centre (after the USA). 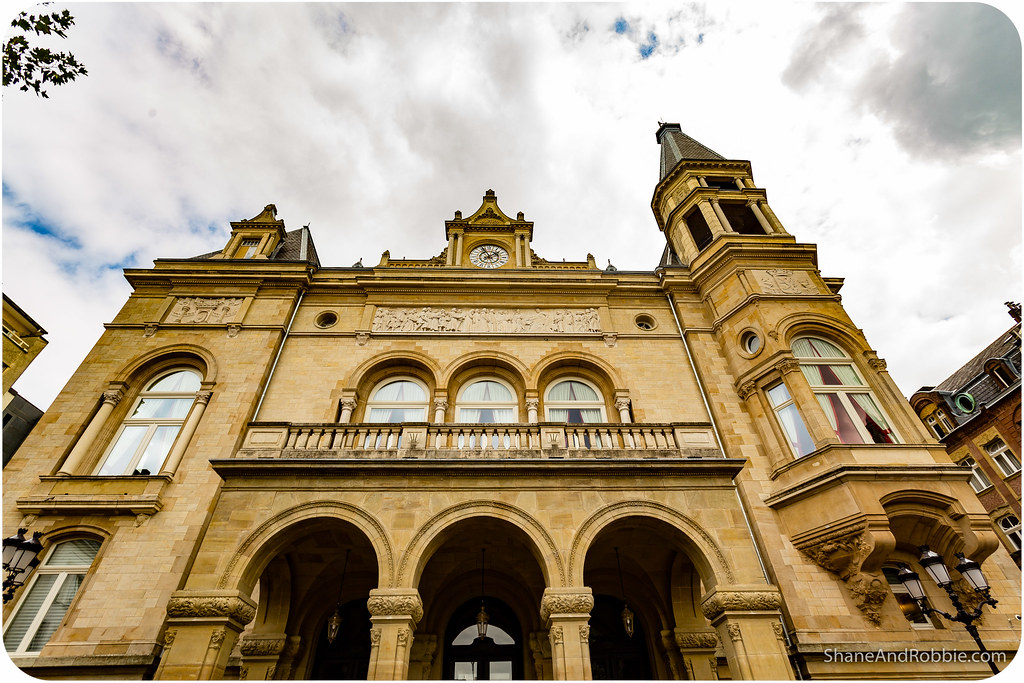 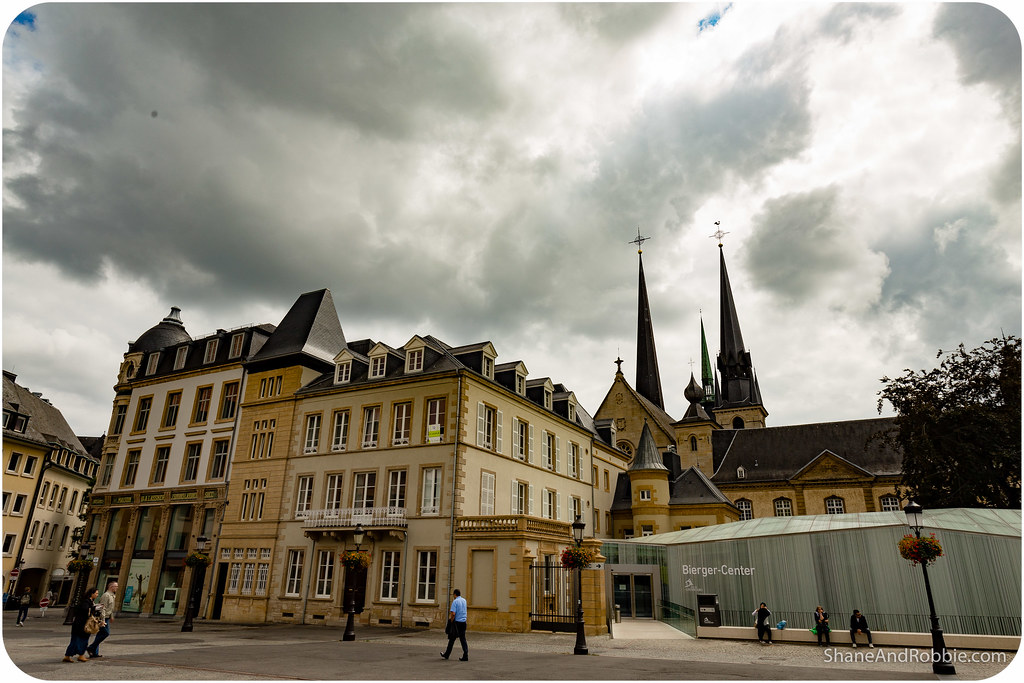 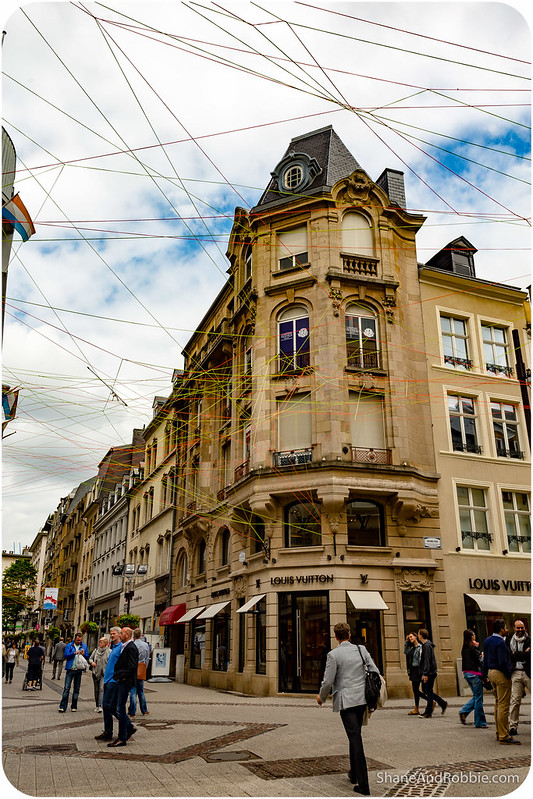 Reflecting its geographic position, Luxembourg’s culture is a fusion of French and Germanic Europe, integrating customs from each of its neighbours. For example, Luxembourg is a trilingual country: Luxembourgish*, French and German are official languages. The food seems to take the best from both worlds too, with sauerkraut and schnitzels sitting on the menu next to escargot and cordon bleu.

*A Germanic language with a bit of a French twist to it, and a few unique bits of its own. 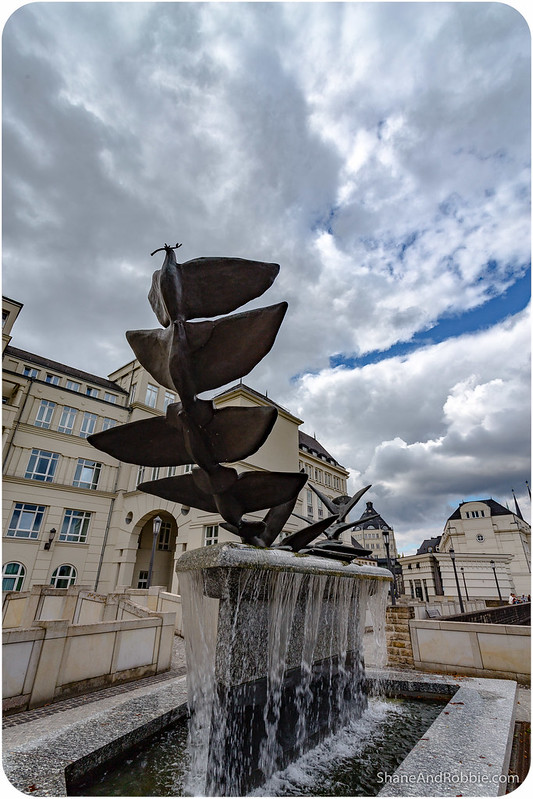 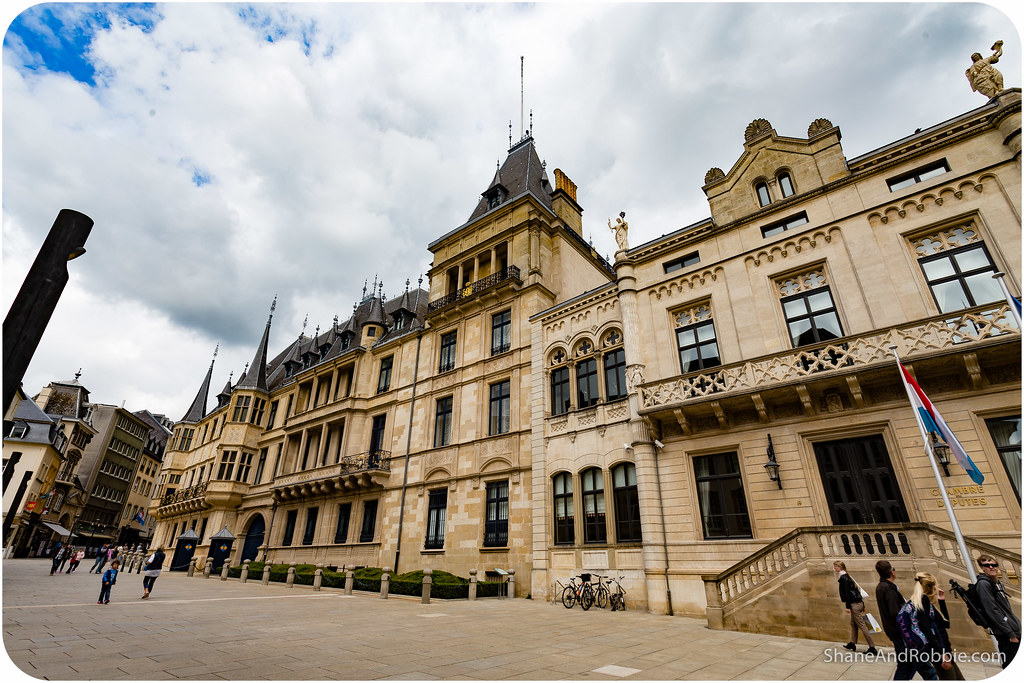 Like most people who come to Luxembourg we’re staying in the capital, which, with a population of just over 100,000, is small enough to feel intimate and comfortable, but large enough to have everything you need as a visitor. It’s also a very picturesque town, built across the Luxembourg Plateau at the confluence of the Alzette and Pétrusse Rivers, with lots of wide boulevards, green space, and beautiful public spaces. 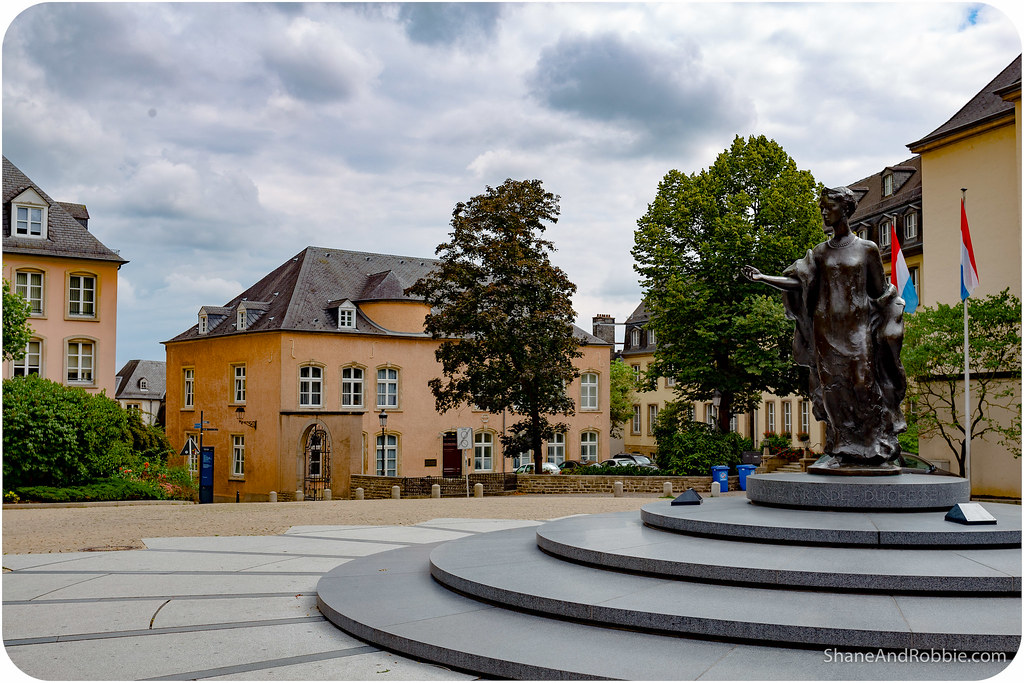 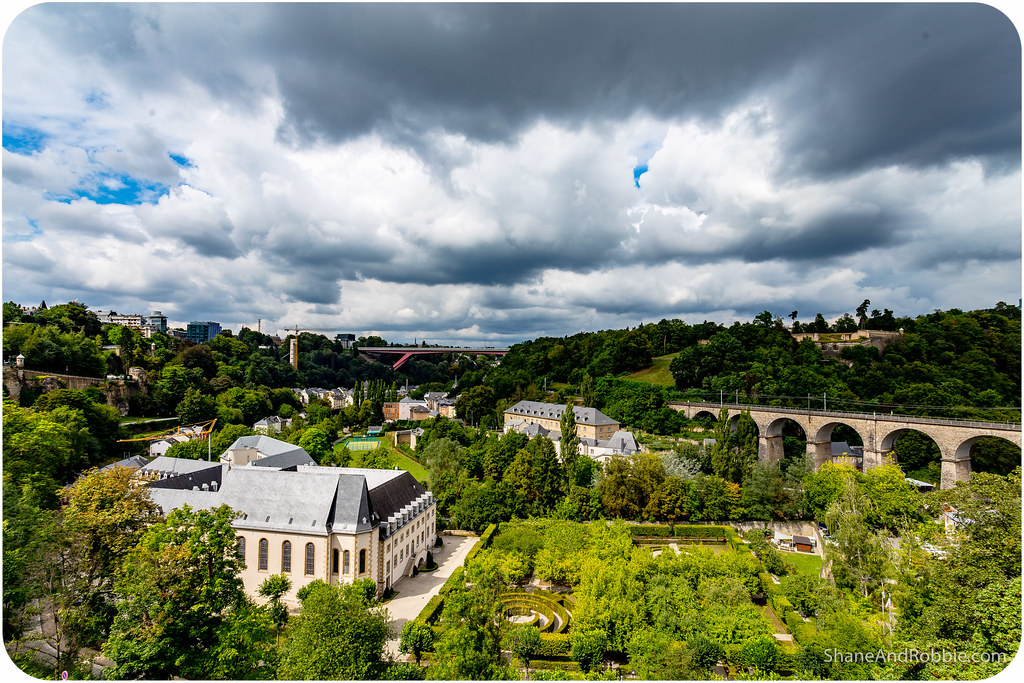 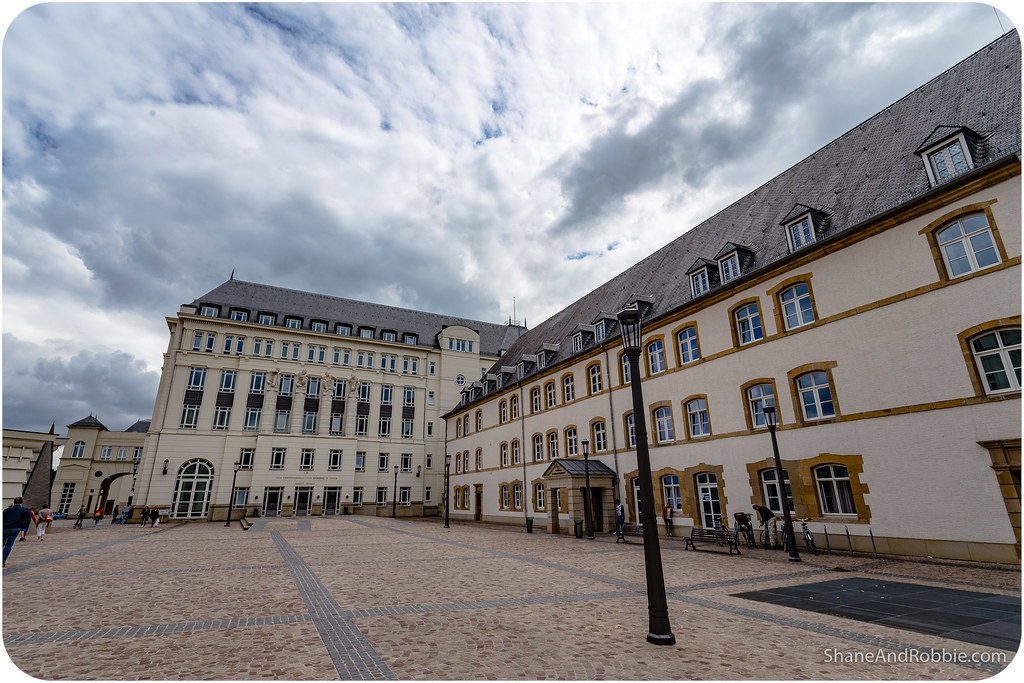 One of the nicest public spaces we found was the Place d’Armes, the city’s main square. Once the parade ground for the troops defending the city, this large square is now the beating heart of Luxembourg City. 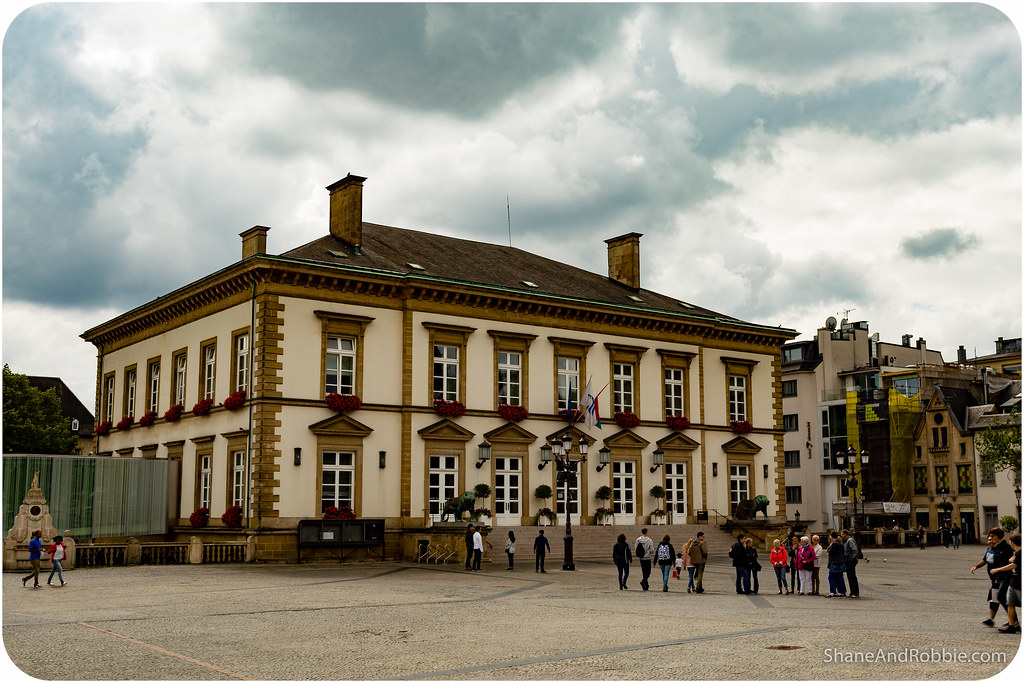 Luxembourg City is essentially divided across 4 main regions:
• The Ville Haute (“High City”), the Medieval town core, which became home to the nobles and gentry as the city expanded.
• The Ville Basse (“Low City”), situated in the gorge formed by the rivers cutting their way through the landscape. This was historically home to the working classes but is now just as gentrified as the High City.
• La Gare (“The Station”), the least glamorous part of the city, positioned around the main train and bus station.
• Kirchberg, the newest part of town and site of the country’s political offices and EU institutions.

We’re staying around the train station in the less salubrious part of town, but given how small the city is, we’re only 10 minutes walk from all the high fashion stores and glamour of the old town (Ha ha – as if they would let us in to their fancy shops anyway!) 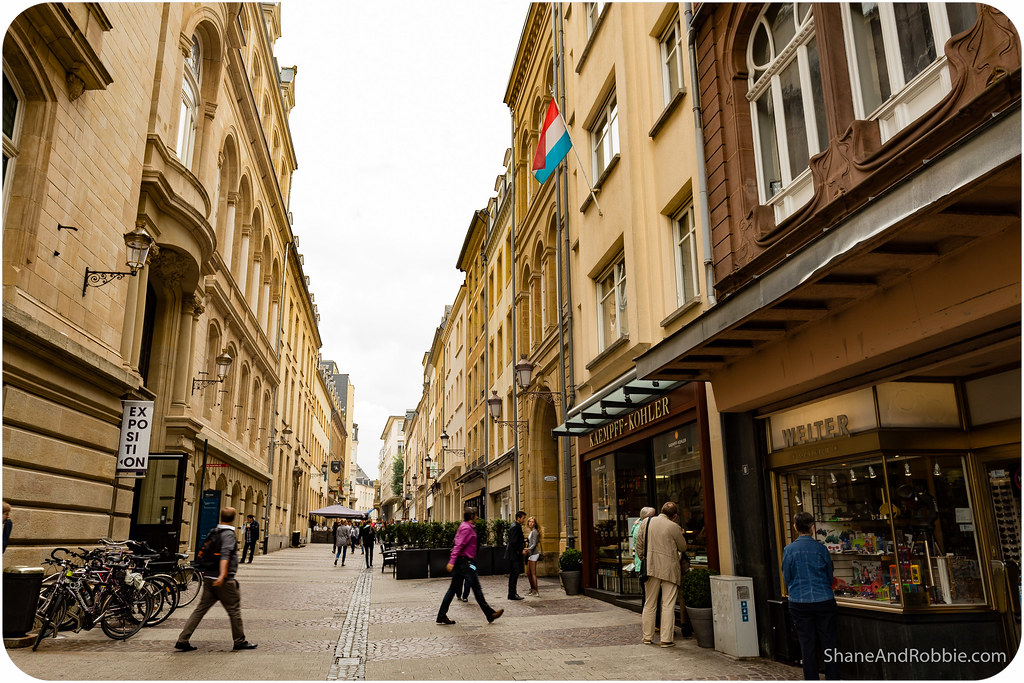 As well as peering into the windows of all them fancy shops, while we were exploring the old town this afternoon we stopped the Cathedrale de Notre Dame Cathedral. It was originally a Jesuit church, and its cornerstone was laid in 1613. Given it’s the country’s only cathedral, it was a surprisingly simple church. 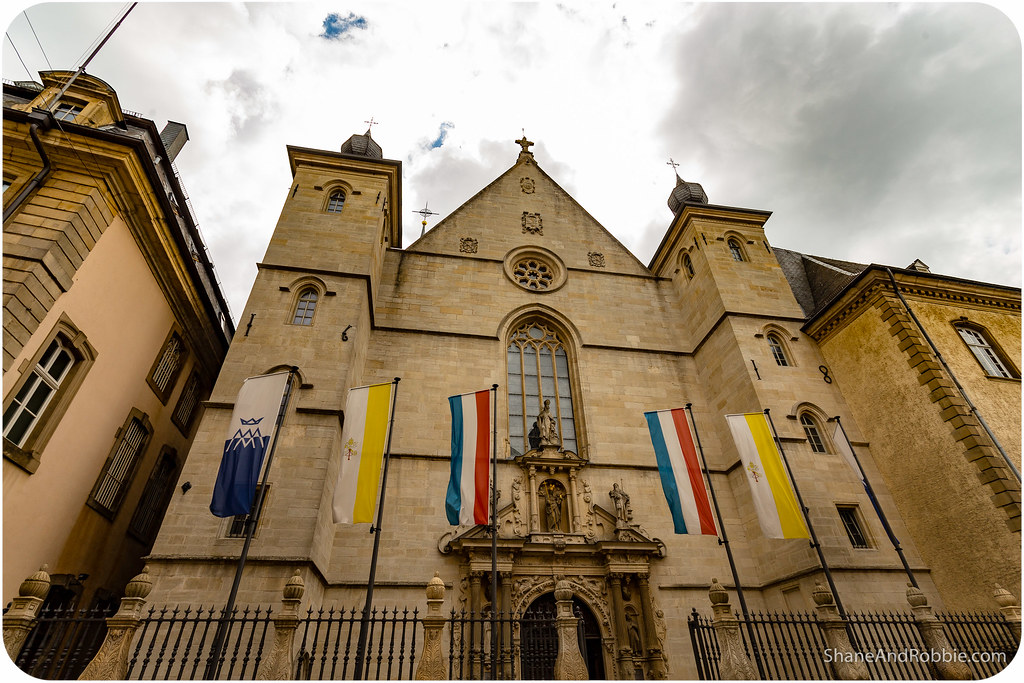 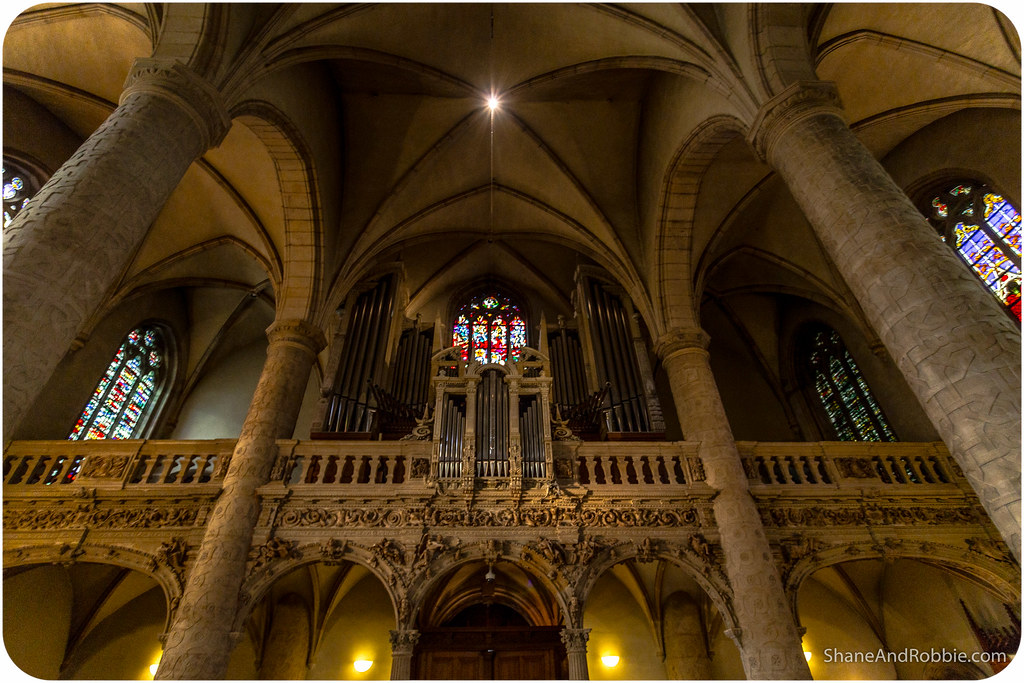 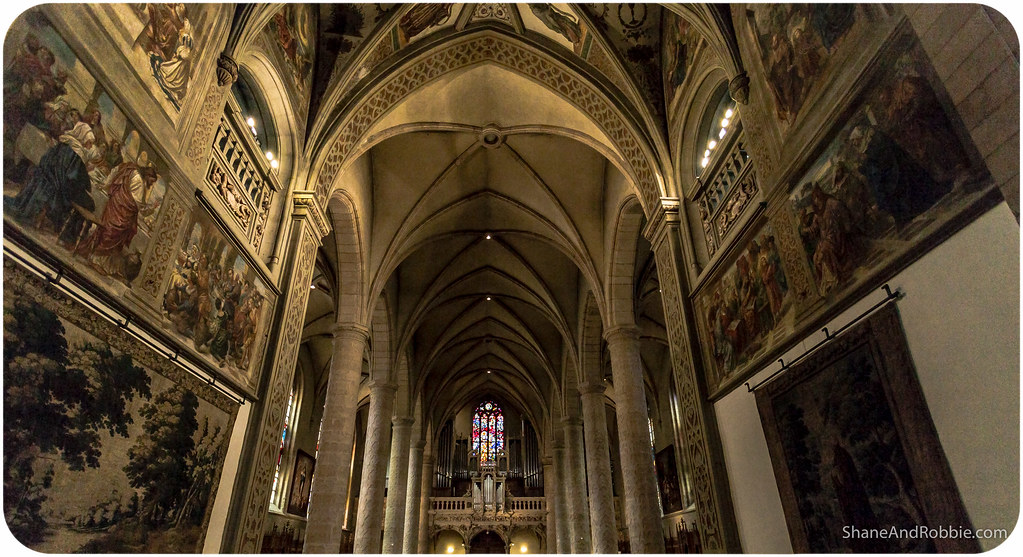 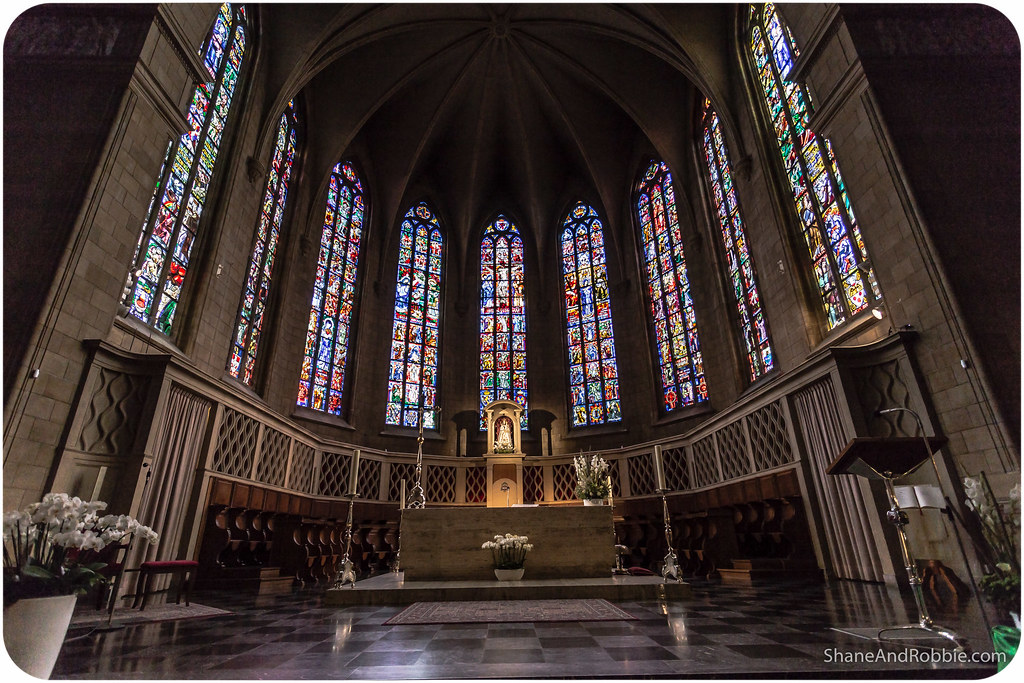 By far the best part of the afternoon, however, was strolling along Le Chemin de la Corniche – the promenade built along the old city ramparts, along the edge of the Luxembourg Plateau. The 70m drop down into the narrow river valley below ensured the views were beautiful the whole way around the High City. 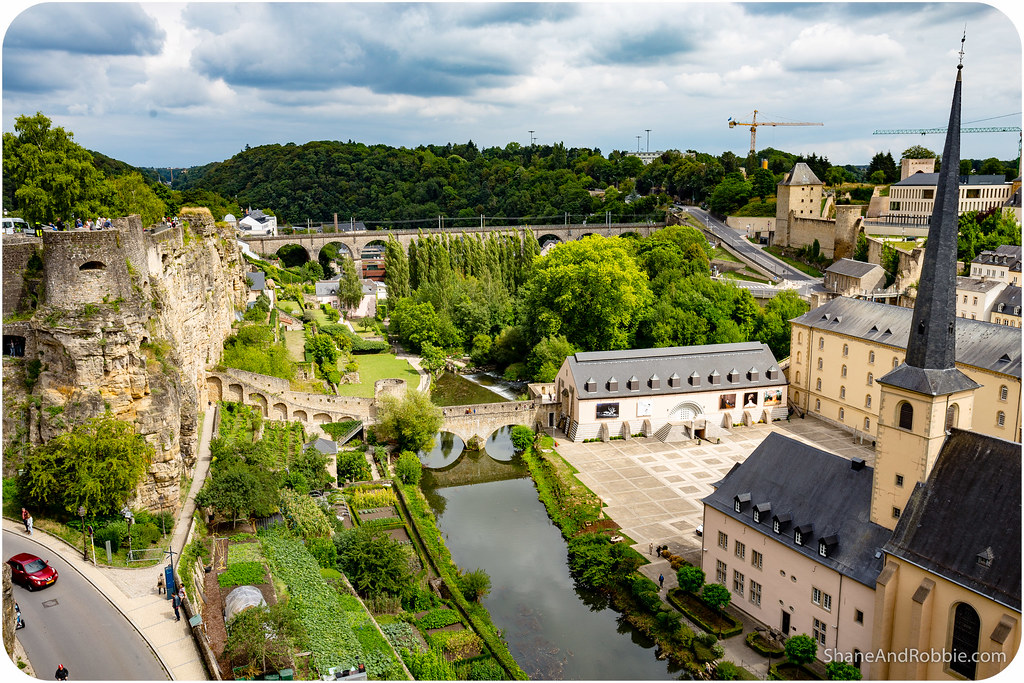 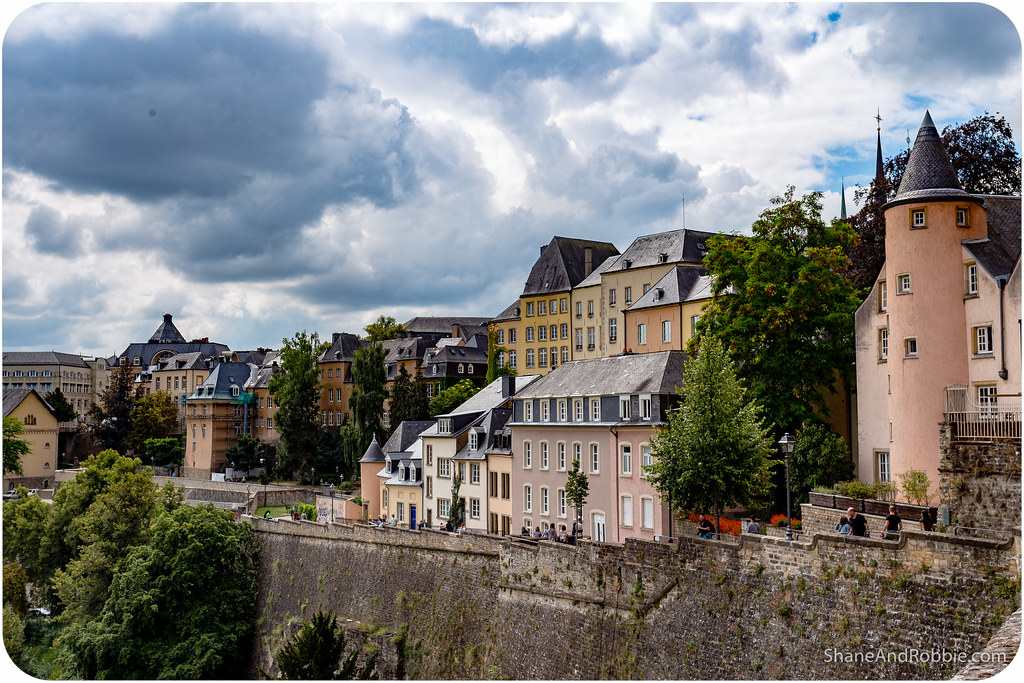 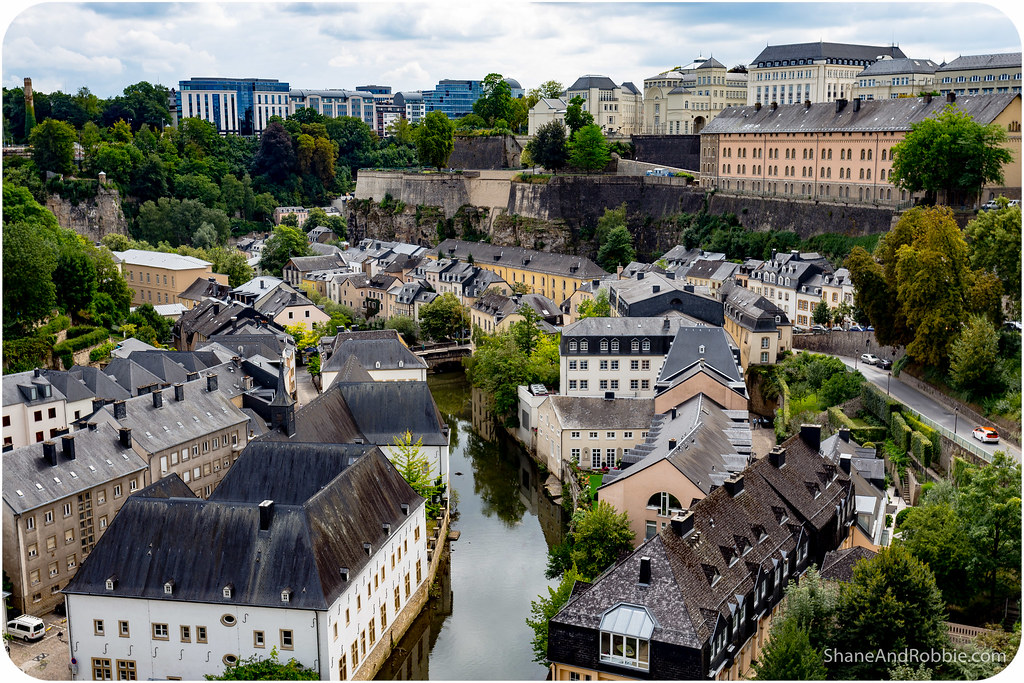 Luxembourg’s central location has historically made it of great strategic importance to numerous powers, and Luxembourg City has been an important European military and economic centre since the time of the Romans. It was repeatedly reinforced as it passed from one great European power to another: from the Holy Roman Emperors, to the House of Burgundy, the Habsburgs, the French, the Spanish, and finally, to the Prussians. Up until 1867, when its defensive walls were dismantled and Luxembourg became an independent nation, Luxembourg City was one of Europe’s greatest fortified sites. The remnants of the city’s fortifications are still pretty impressive, though, and the town’s dramatic setting certainly adds to its charms. 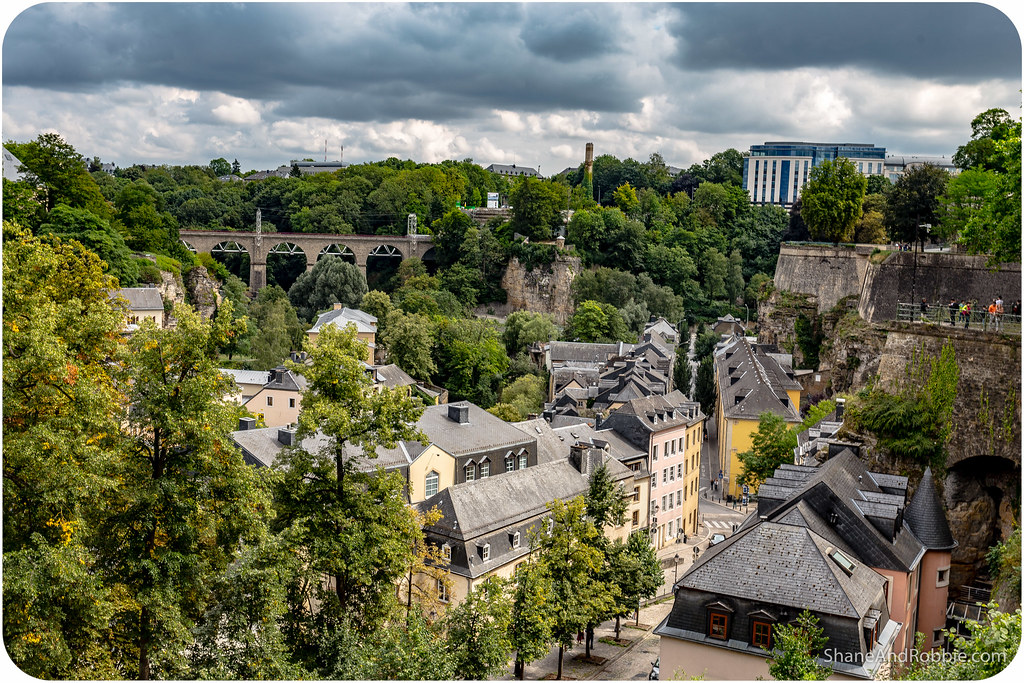 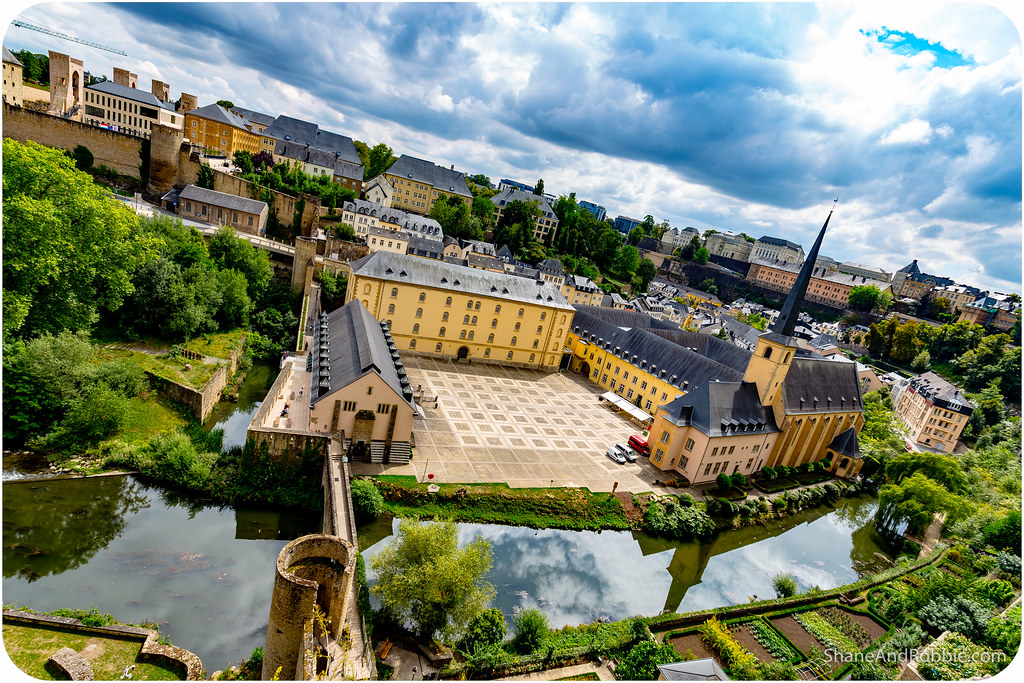 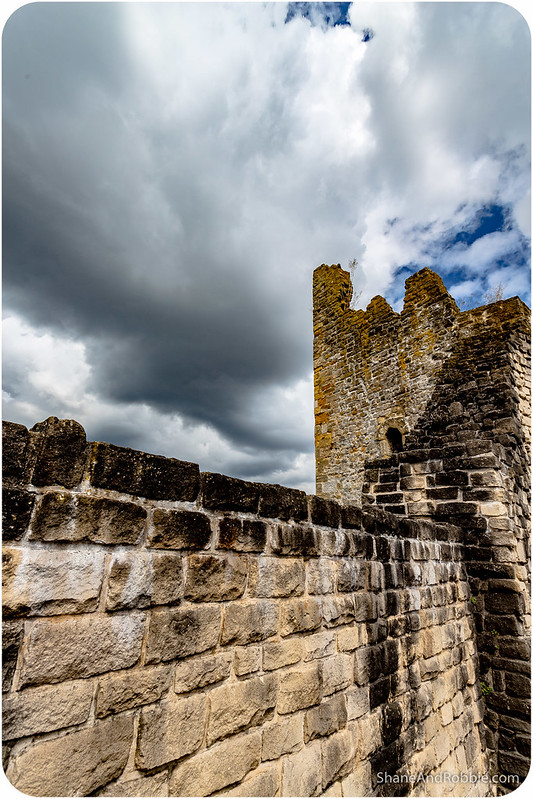 Given the size of the town we feel like we’ve seen most of it in an afternoon, so we’re thinking the best way to utilise the rest of our stay here is to take the leap out into the countryside and see some of Luxembourg’s famed hills and forests. There are a ridiculous number of castles peppered around this country too (another legacy of being one of Europe’s favourite battlefields), so it shouldn’t be hard to find a couple of day trips to keep us entertained… 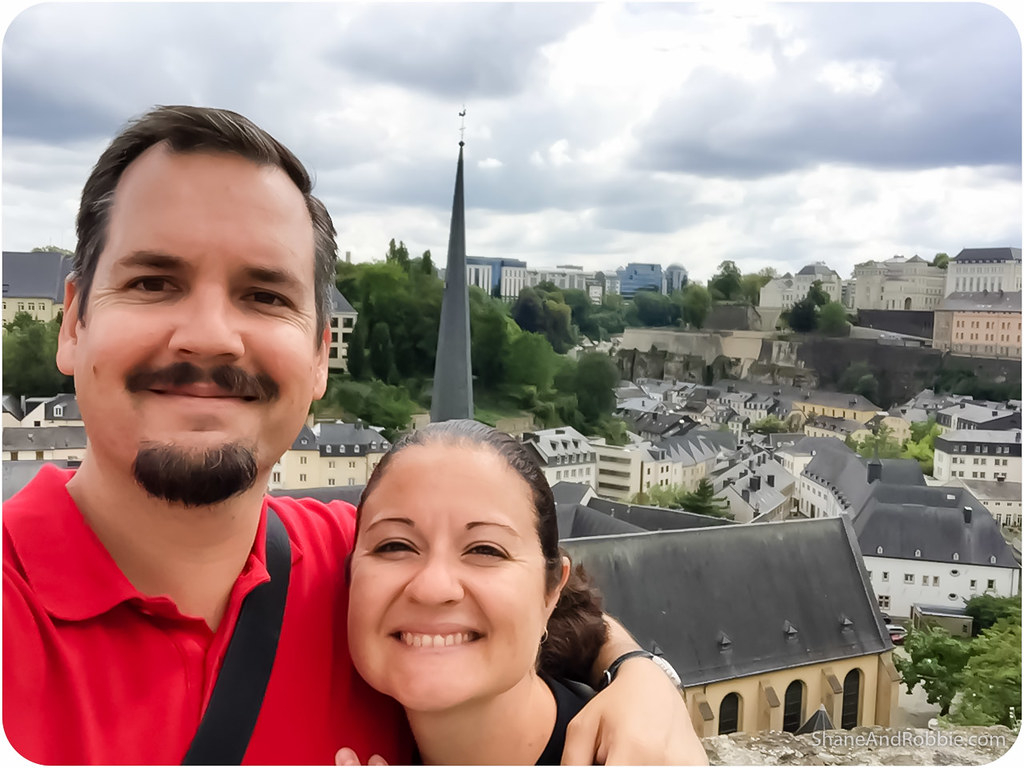