GETTING AN EIFFEL OF PARIS

You could live a lifetime in this city and not see it all! There are so many museums, galleries, parks, gardens, and beautiful buildings in Paris that it’s hard to know where to begin… Our strategy was simple: start with the big stuff and go from there! We spent our day exploring the area around the 7th and 8th arrondissements, home to iconic sights such as the Eiffel Tower, Arc de Triomphe, and the Champs Élysées. Like most people we’ve seen photos and movie shots of these places, but being there in undeniably better. There’s something quite spectacular about Paris and, despite the crowds and the chaos, we’re loving it!

Paris is one of the largest cities in Europe with 12 million people living in its greater metropolitan area; add to that a million visitors a week and it makes for a very busy city. We expected things to be crowded, but the sheer press of people left us more than a little shell-shocked this morning. We started the day with grandiose plans to climb the Eiffel Tower, stroll down the Champs Élysées, take a day-time cruise down the Seine, and maybe even climb the Arc de Triomphe for a view of the infamous round-about that surrounds the monument. Ha! After seeing all the people, we decided to just admire things from a distance and explore some of the quieter parts of town. 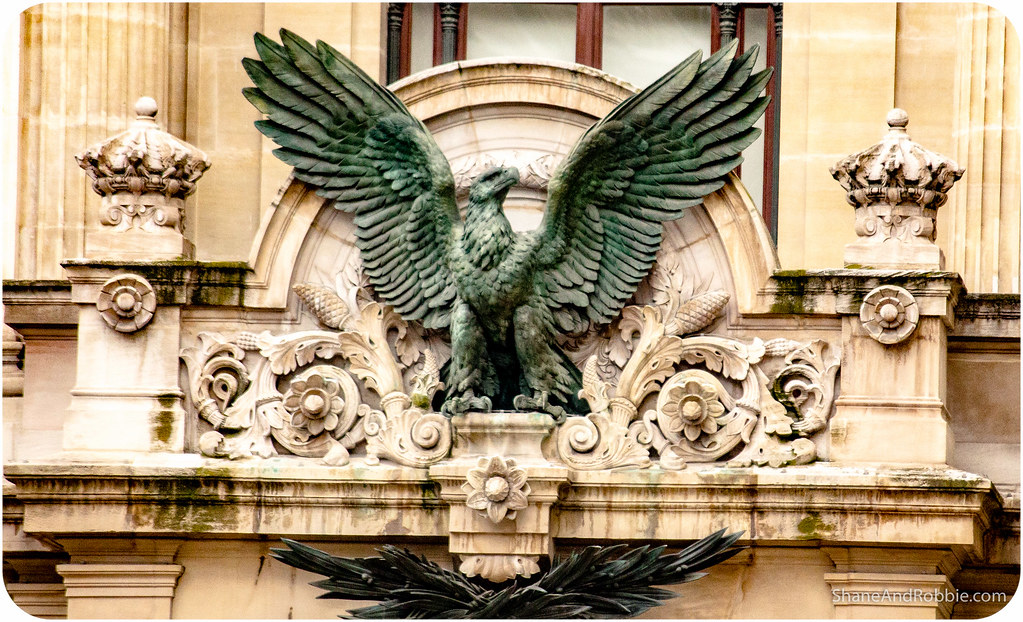 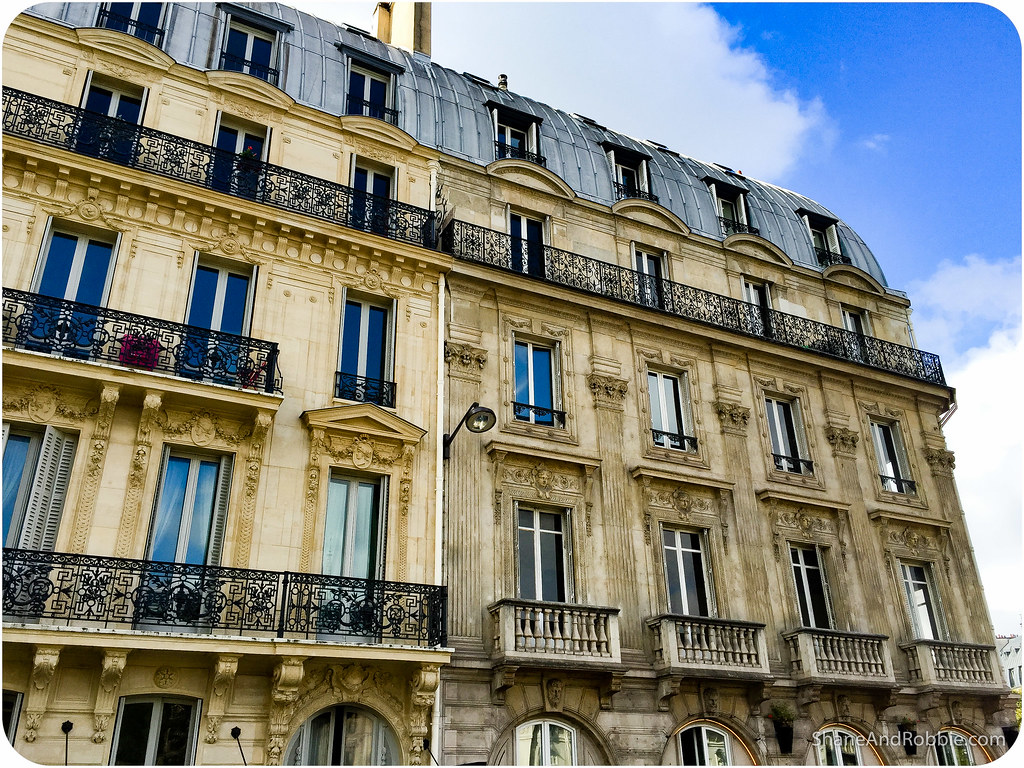 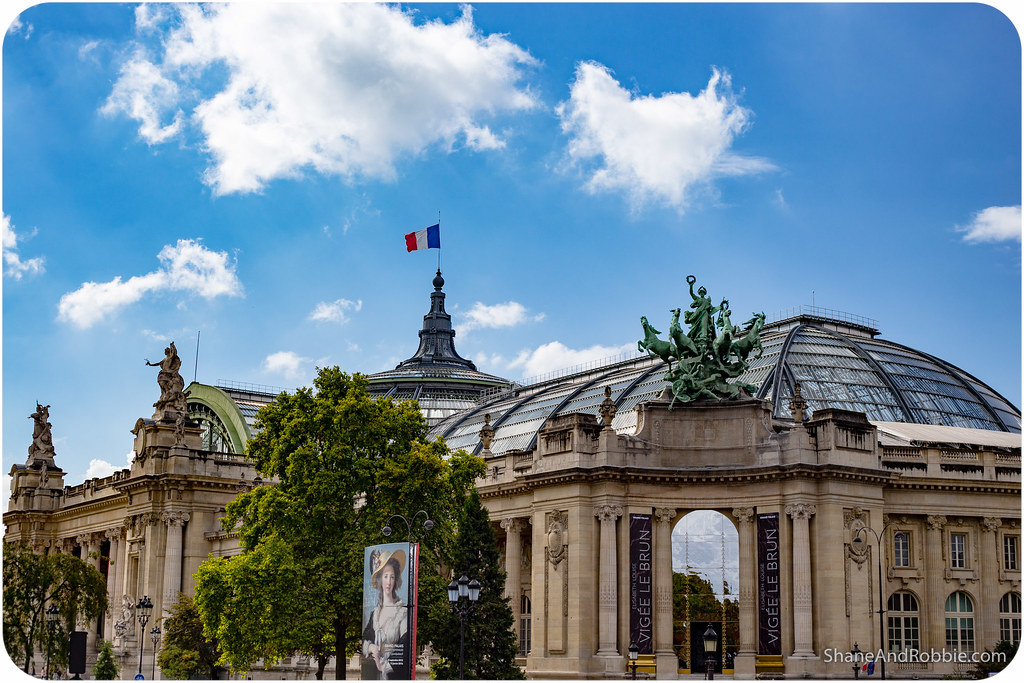 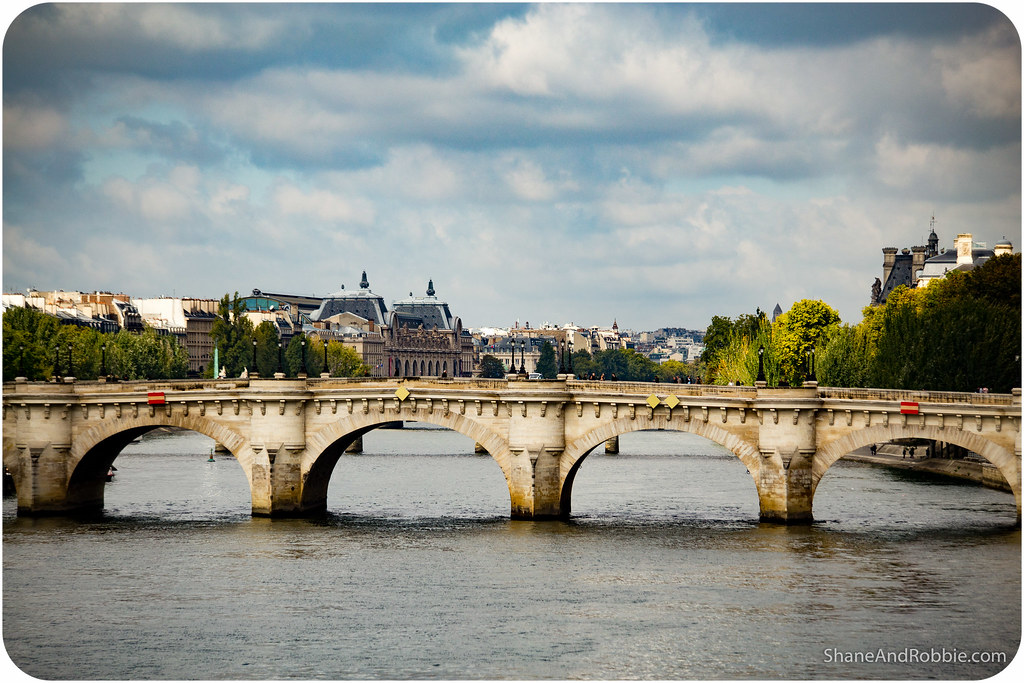 The queue for the Eiffel Tower alone would have taken us 3 hours, so we avoided that got to spend that time far more productively (in our opinion anyway), exploring the city away from the hordes. We’re not big fans of the sort of tourism where you just run around ticking things off your list of “must do’s” and “must see’s”. For us the joy of a visiting a place is in immersing ourselves in it as much as possible; in wandering the streets aimlessly and soaking up the atmosphere. Obviously if we get to see a few of the big sights along the way, that’s great, but spending protracted time in queues is not for us – we’d rather be exploring. And our navigations of the side streets were well rewarded, with more of Paris’s lovely architecture revealing itself to us. 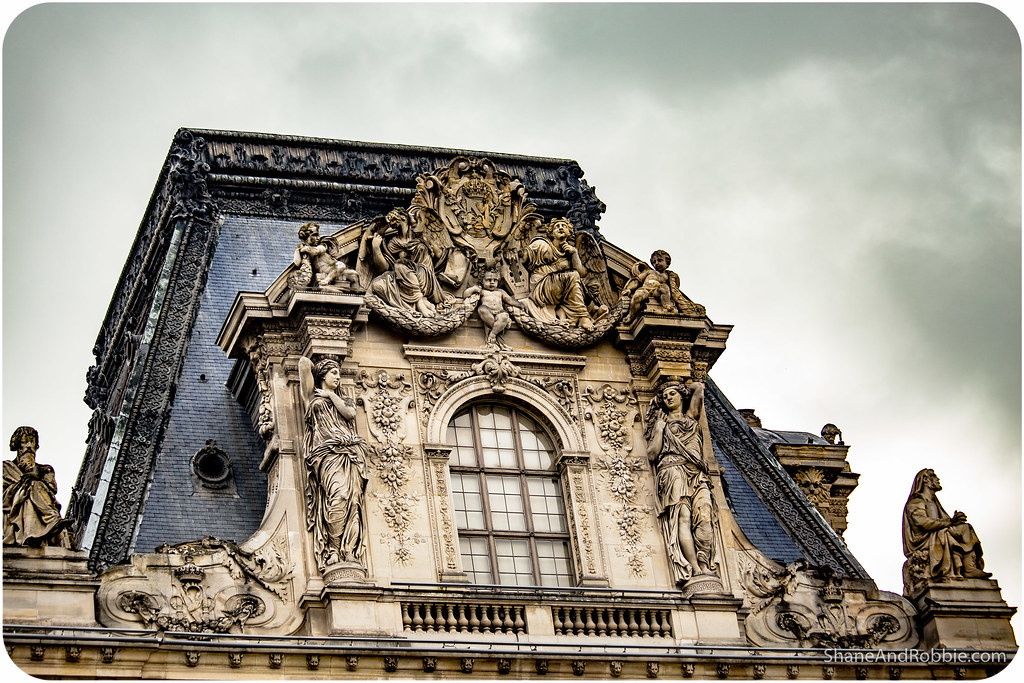 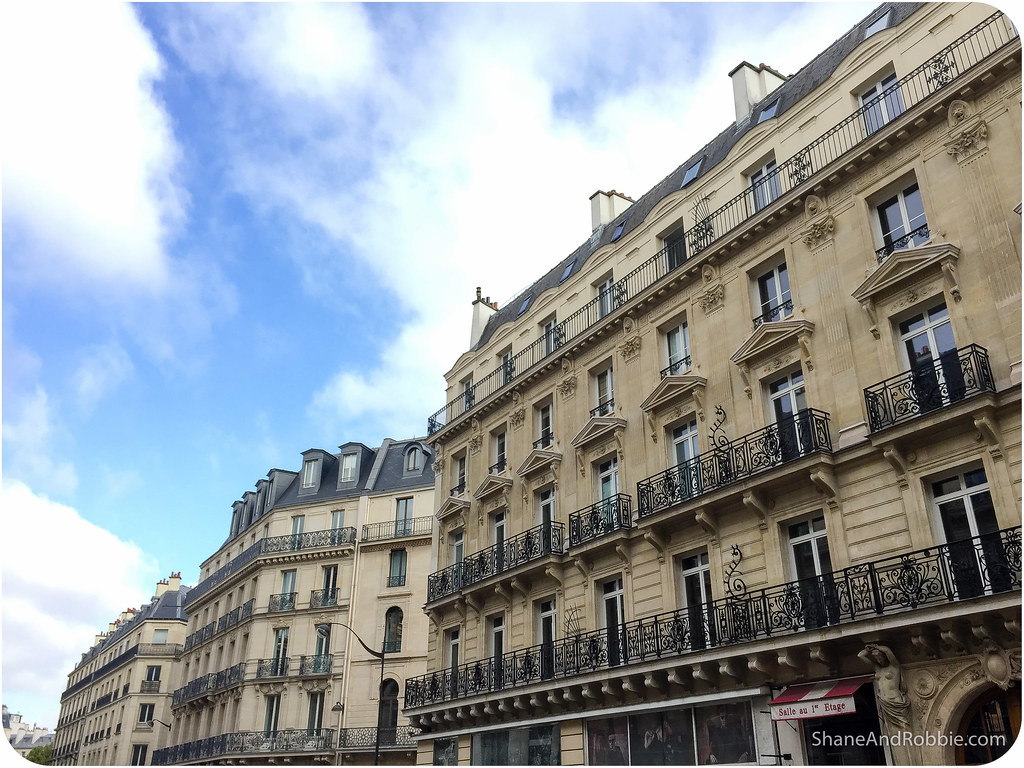 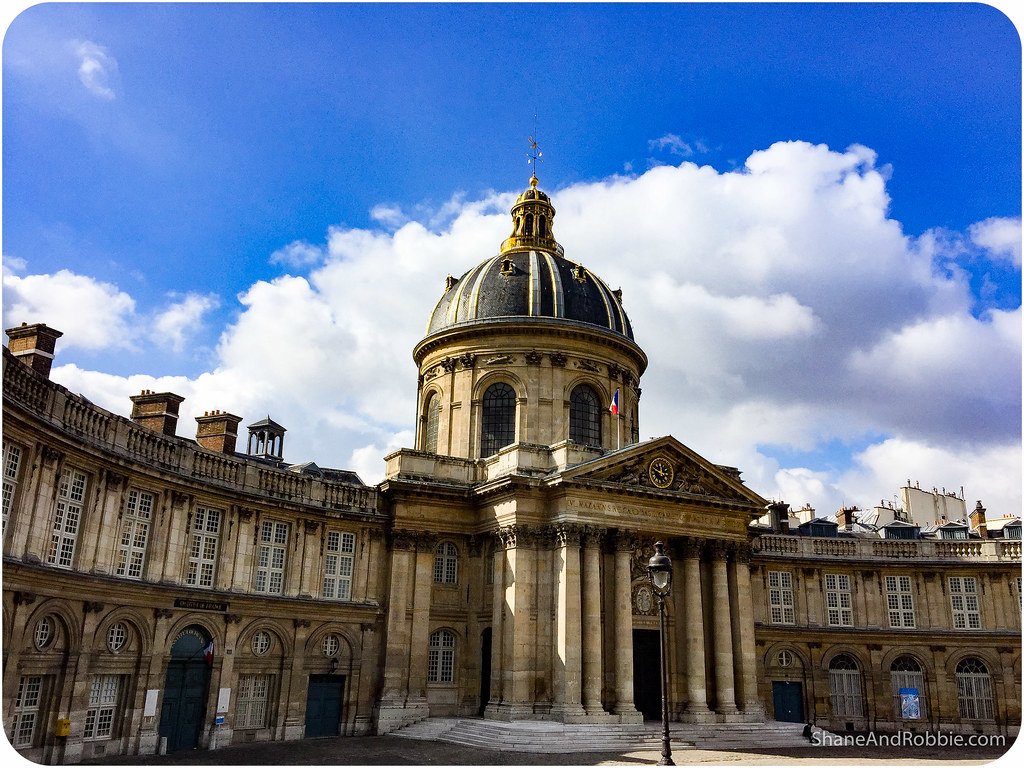 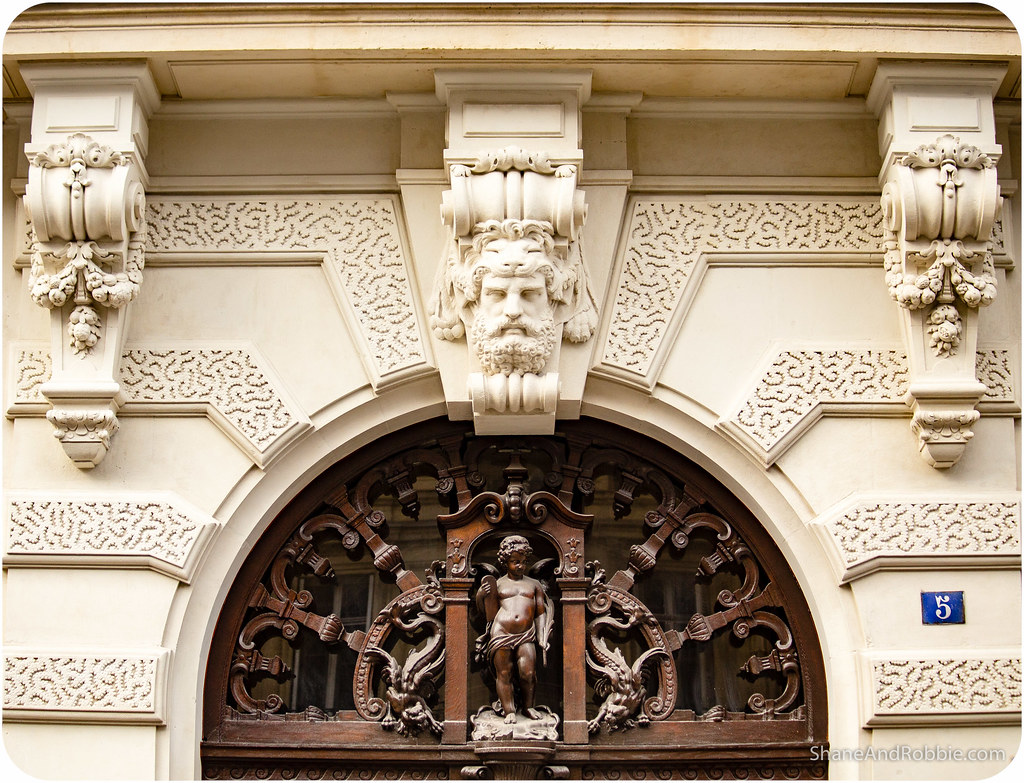 We did get to see some big sights, of course, starting with Les Invalides. Better known as Hôpital des Invalides this complex of buildings was built in 1670, on order of Louis XIV, as a home and hospital for aged and wounded soldiers. The complex was still being used as a care facility for military veterans until the early 20th century when it was converted into a museum. Today the buildings house the Musée de l’Armée, the military museum of the Army of France, as well as the burial site for some of France’s war heroes, most notably Napoleon Bonaparte. 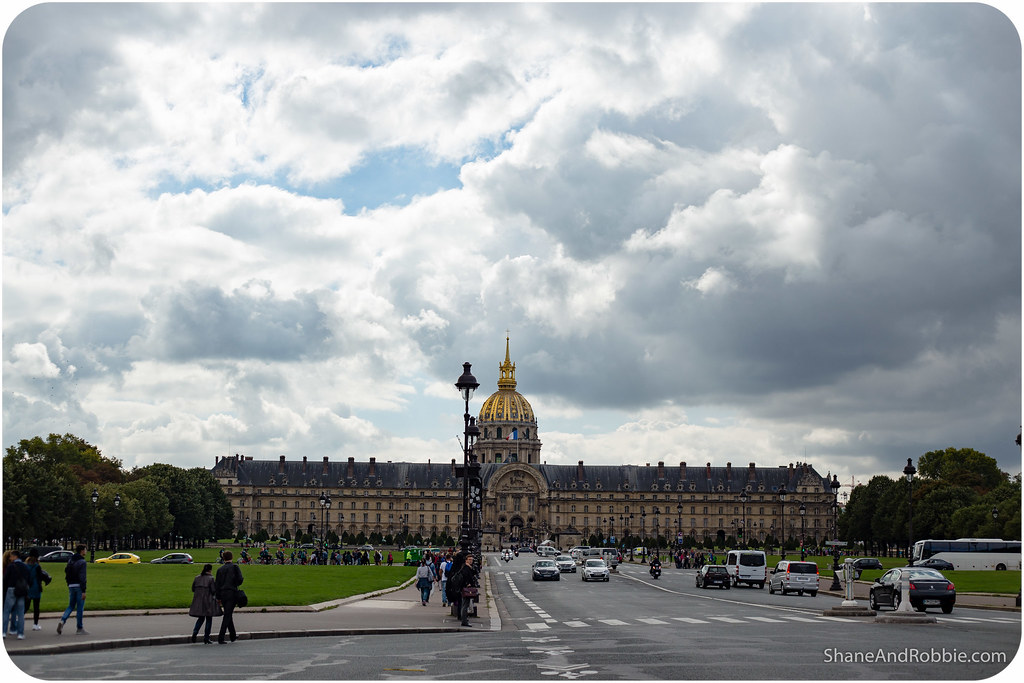 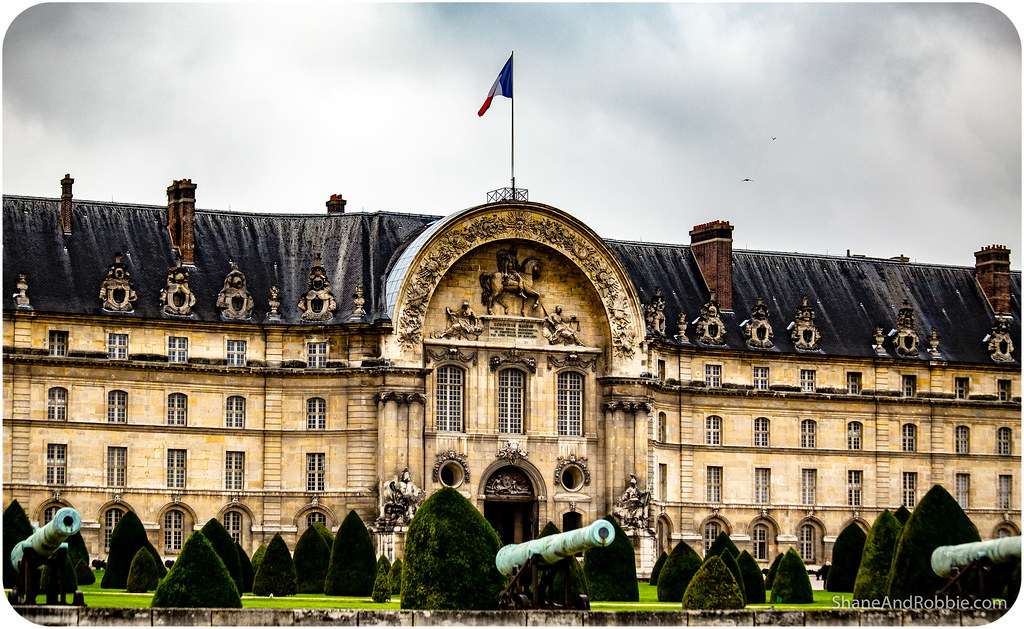 In keeping with the military theme, the French École Militaire (i.e. Military School) stands nearby. This vast array of buildings dates back to the 18th century and still houses various training facilities associated with the French armed forces. 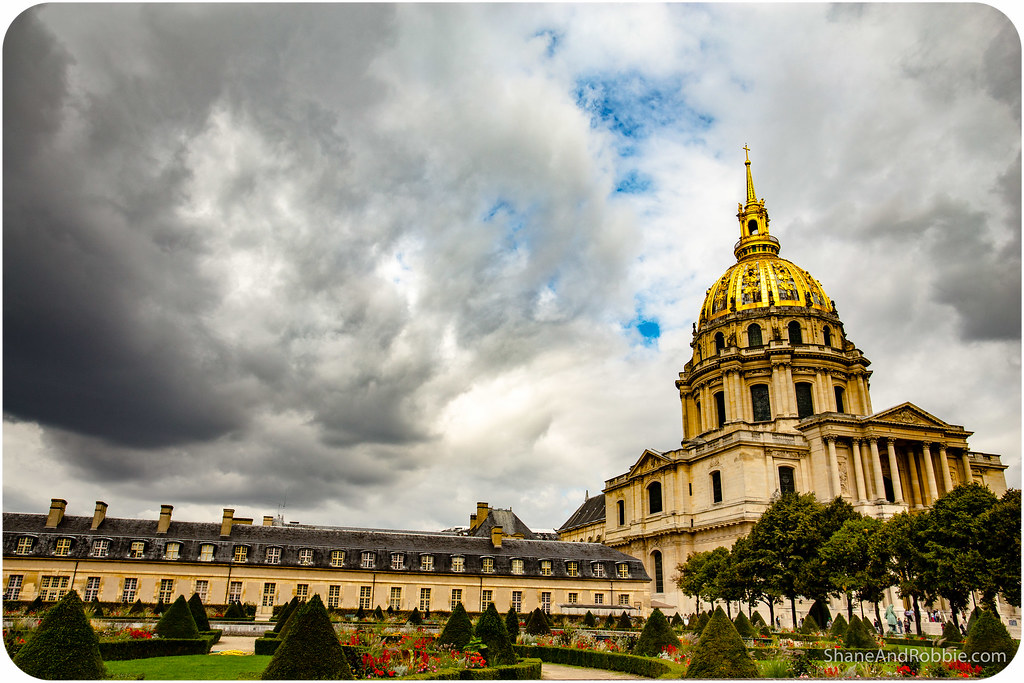 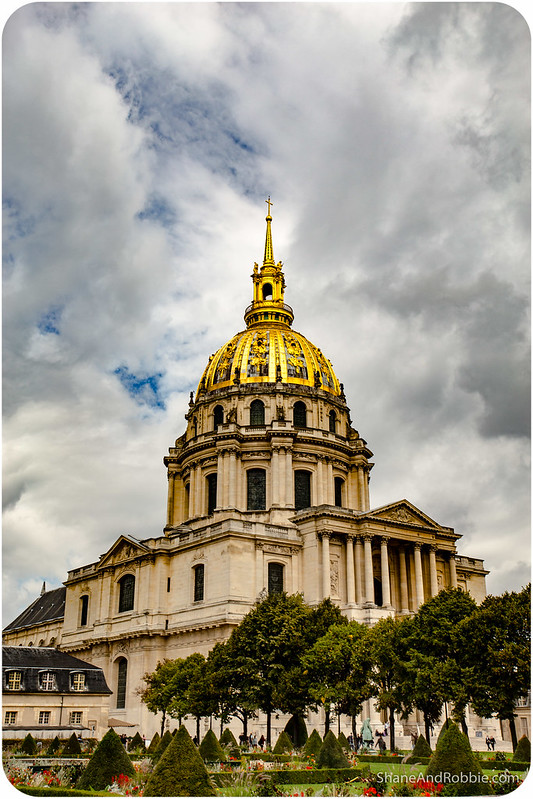 Leaving the epic military buildings behind we walked down Fete de la Concorde, towards the River Seine.

Crossing the river here meant we got to see Pont Alexandre III up close. We saw it last night from the boat during our night-time river cruise and thought it looked pretty spectacular then; by day it’s even more beautiful! The bridge is widely regarded as the most ornate bridge in the city, with its sumptuous Art Nouveau lamps, cherubs, nymphs and winged horses at either end. The decorative details of the bridge are just lovely. 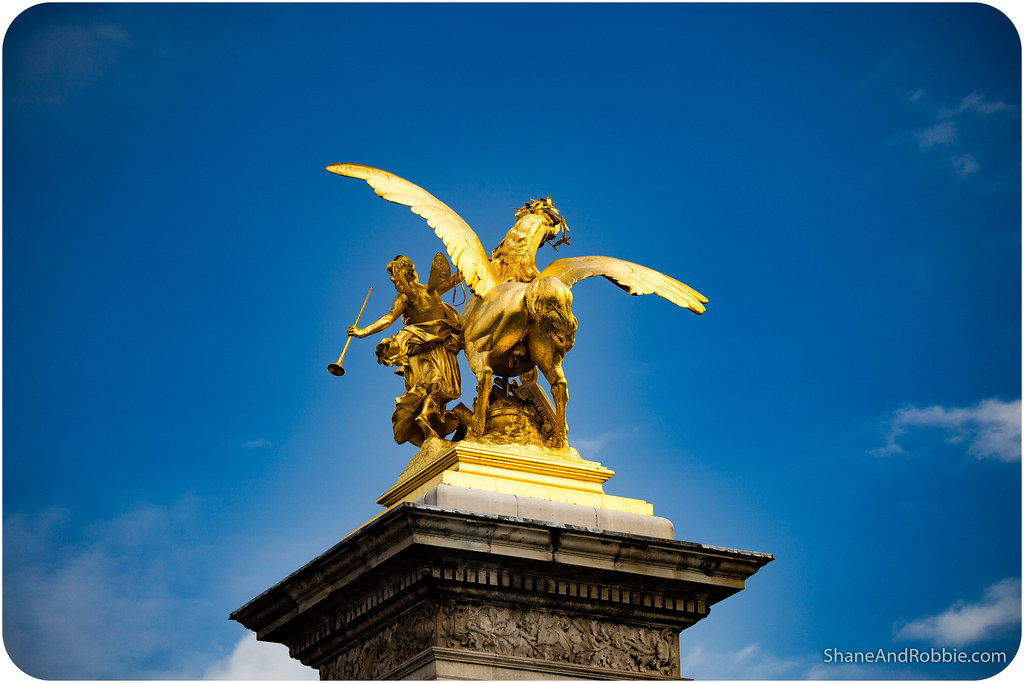 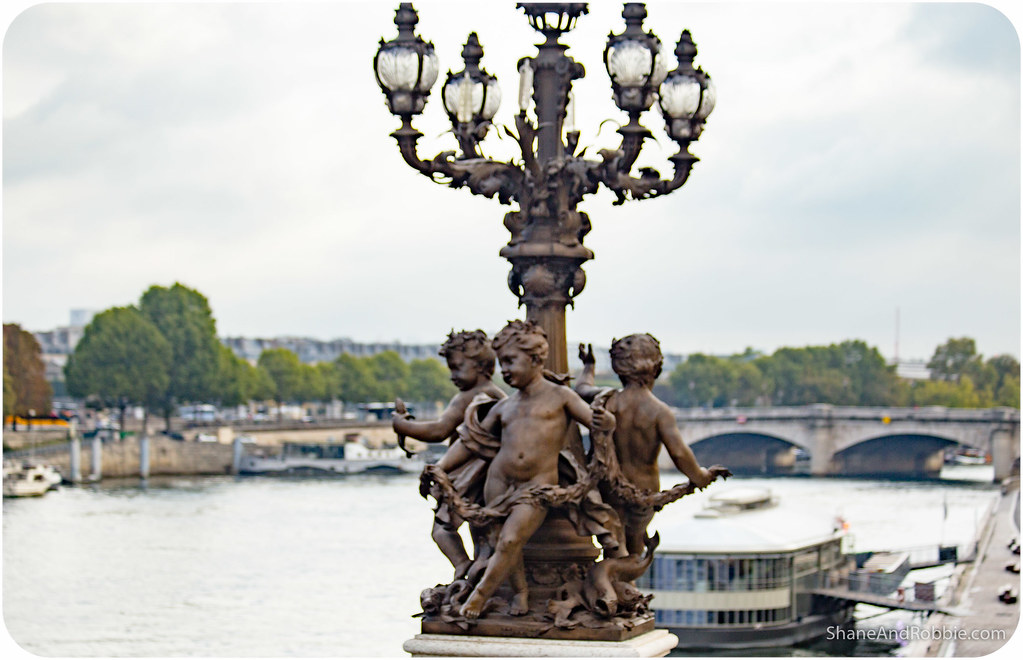 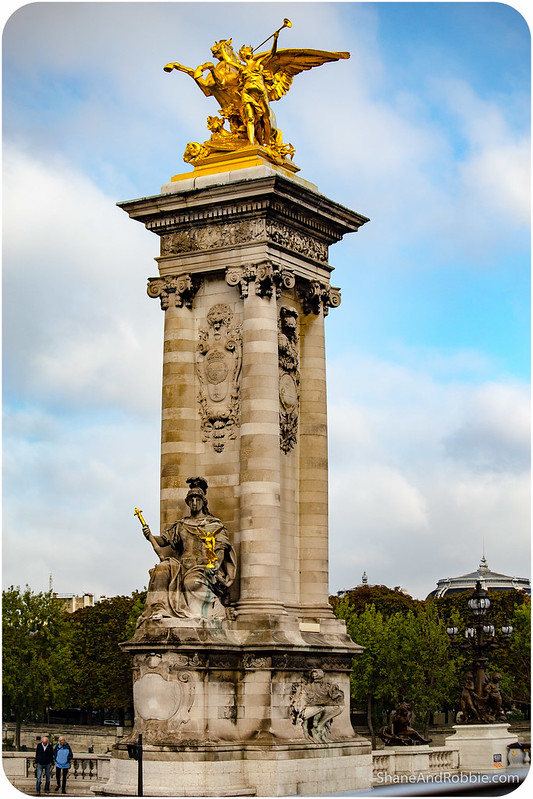 Built between 1896 and 1900, it is named after Tsar Alexander III, who had helped solidify the Franco-Russian Alliance in 1892. The construction of the bridge was said to be a marvel of 19th century engineering, consisting of a single steel arch spanning the river. The design was subject to strict controls that prevented the bridge from obscuring the view of the Champs Élysées or Les Invalides. 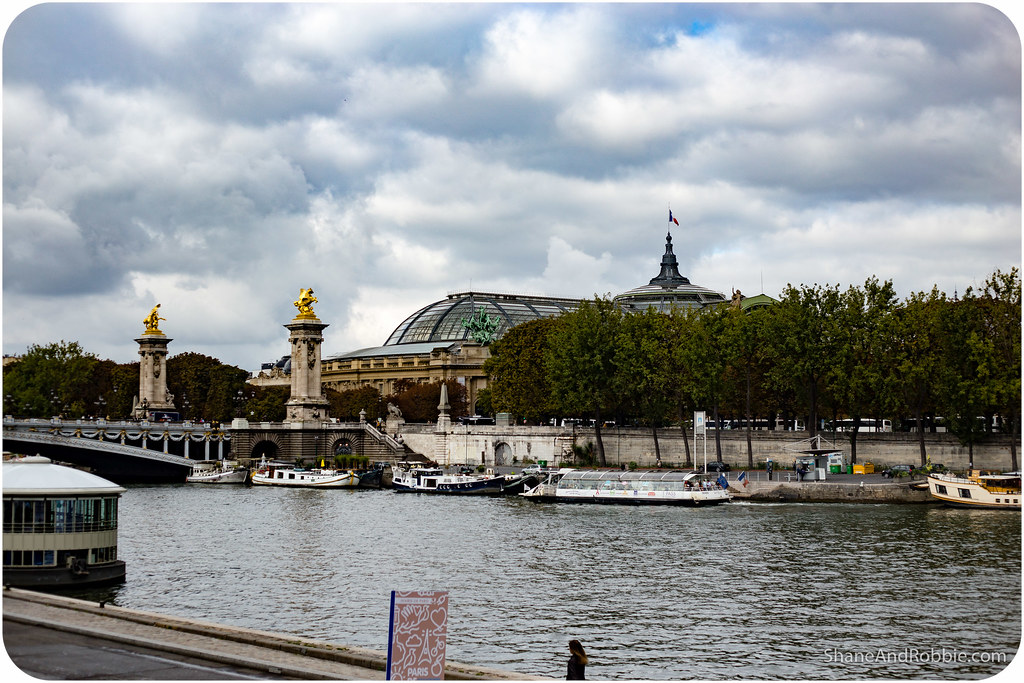 Crossing the river we got to Place de la Concorde, the biggest public square in France and one of its most infamous. It was here that, during the French Revolution the statue of Louis XV of France was torn down and it was here that King Louis XVI was executed on 21 January 1793. Queen Marie Antoinette also met her demise here in front of cheering crowds.

At the heart of Place de la Concorde stands the Luxor Obelisk, a gift to France from the Egyptian king, given in thanks for France’s help in translating some ancient Egyptian hieroglyphs. The Luxor Obelisk is over 3,000 years old and was originally situated outside of Luxor Temple, where its twin remains to this day. In all honesty it seems a tad out of place here in Europe, but who are we to judge?! 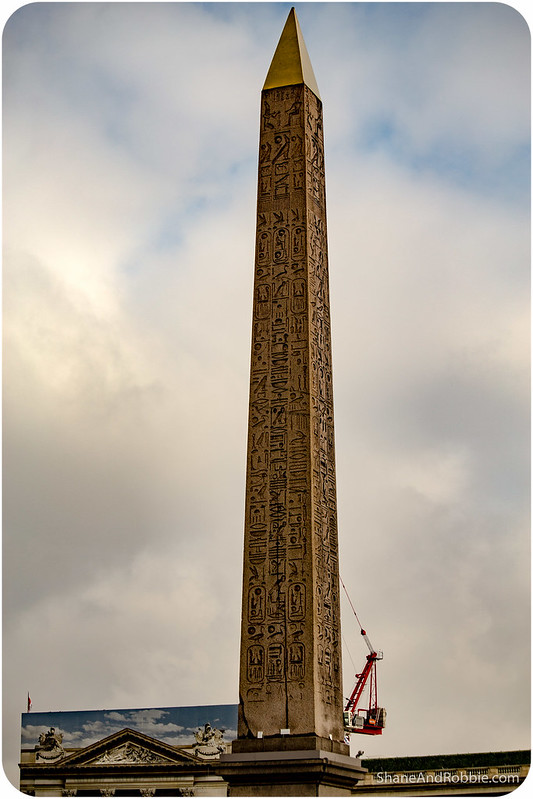 From Place de la Concorde we could see all the way down the Avenue des Champs Élysées to the Arc de Triomphe. This 2km-long boulevard is famous for the military parade that happens along its length every year on Bastille Day and is named for the Elysian Fields (the paradise, according to Greek mythology, that dead heroes go when they die). 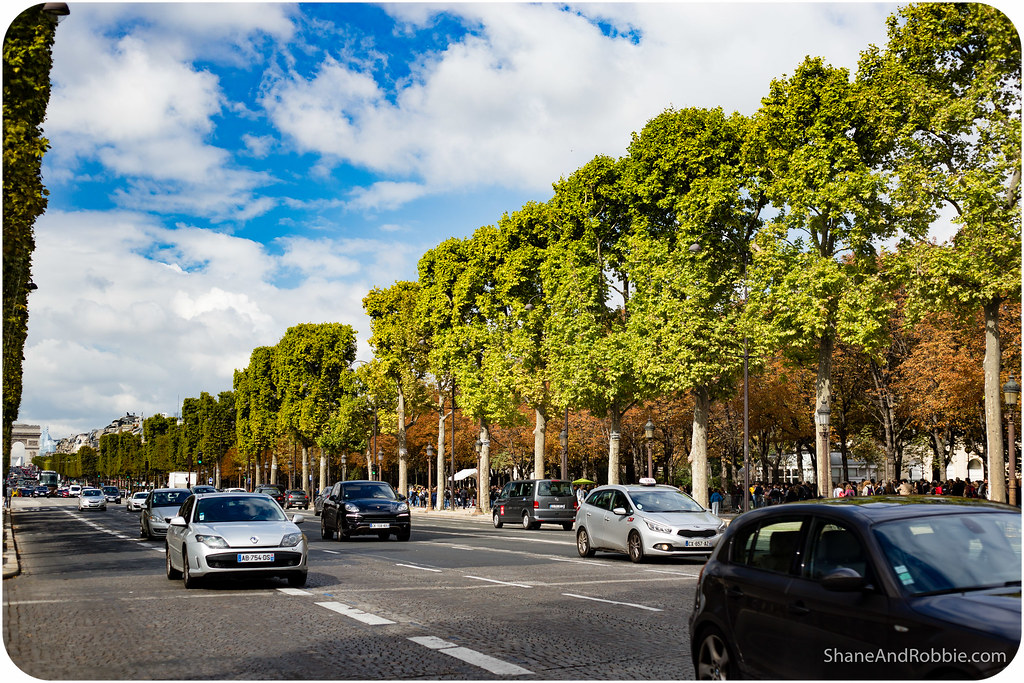 In keeping with the theme of military triumphs and heroes, the crowning glory of the Champs Élysées is the famous Arc de Triomphe. Built to honour those who fought and died for France in the French Revolutionary and Napoleonic Wars, the Arc has the names of all French war victories and generals inscribed on its inner and outer surfaces. Beneath its vault lies the Tomb of the Unknown Soldier from World War I. As a war memorial it’s very impressive, though the streams of traffic flowing around the Arc seemed to detract from its significance somewhat for us. 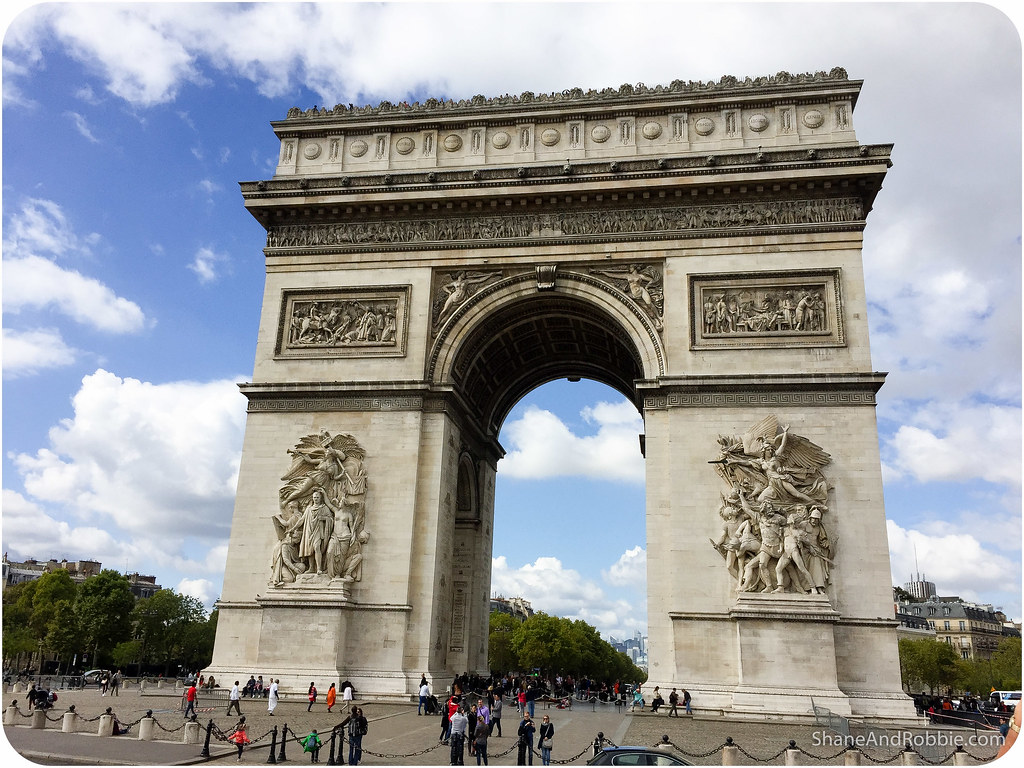 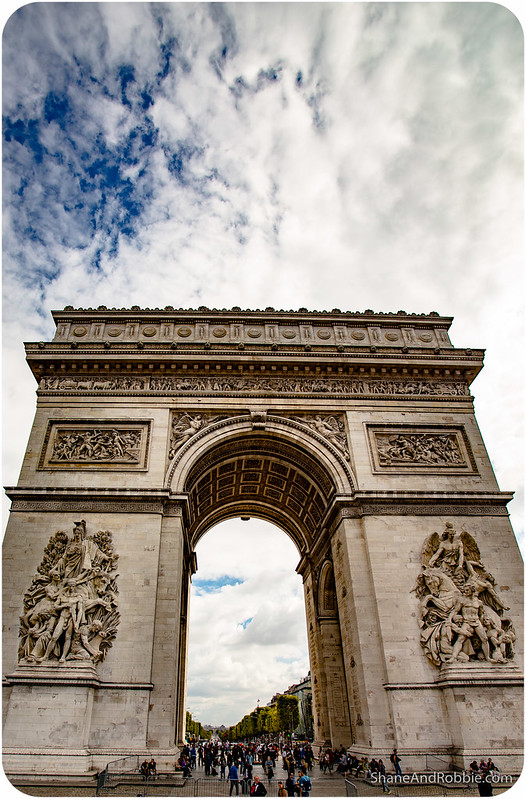 And of course, if you’re going to spend the day exploring some of Paris’s most iconic landmarks, you can’t forget this one can you… 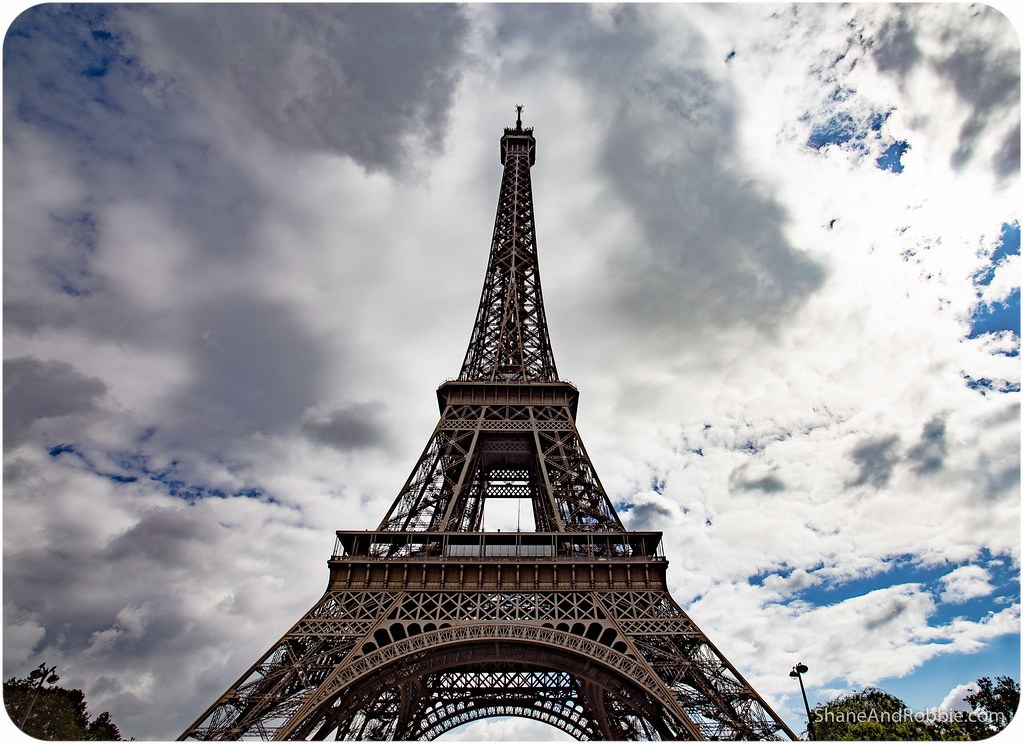 The iron tower that is Le Tour Eiffel is quite something to behold. We knew it would be big, but did not expect it to be quite so pretty. For something so industrial and monumental in nature, there is something quite graceful about the Eiffel Tower. Something that even all the thousands of ant-like humans crawling around its base and up its stairwells cannot diminish. 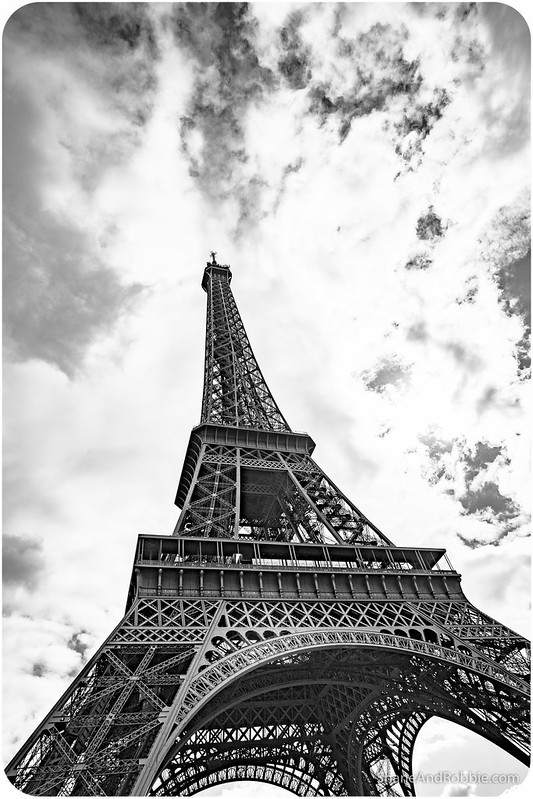 The tower was built as the entrance arch to the 1889 World Fair (held in paris, of course). It was named after the engineer Alexandre Gustave Eiffel, whose company designed and built the tower, and has become THE symbol of Paris and France. Which is funny because originally Eiffel designed the tower to be built in Barcelona, but the Spanish council decided it was too expensive and did not match the aesthetics of the city. So Eiffel offered his design to France and the rest, as they say, is history. 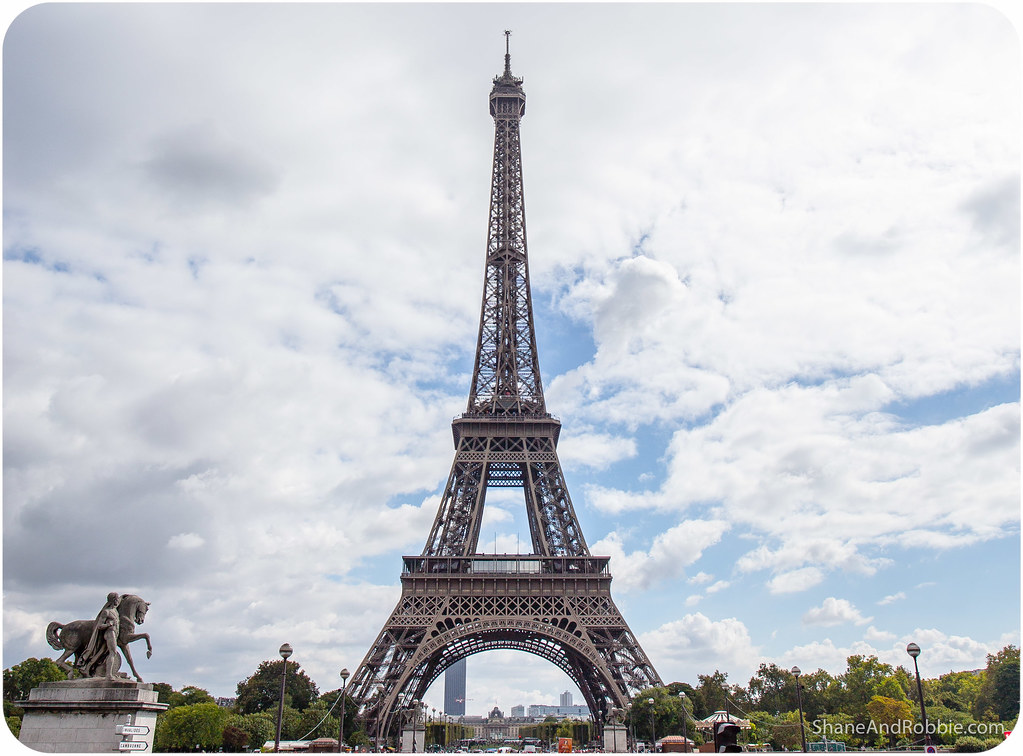 The 324m-tall tower was designed to be temporary and would have been deconstructed after the World Fair was over, except that it was then used as a communications tower and deemed to be too useful to be pulled down. Lucky for us ‘cause that is one awesome landmark!

From the Eiffel Tower we headed away from the grand sights of the 7th and 8th arrondissement, and away from the crowds; back to our quiet, suburban neighbourhood where people were walking their dogs and kids were riding their scooters along the streets. As wonderful as the Eiffel Tower, Arc de Triomphe, etc, were today, it was even better strolling back through the streets around our apartment here. This area feels like somewhere you could live and call home, the chaos around the touristy sights today felt a bit too much like a circus for us to want to linger there. It must be quite a challenge for the citizens of this city to live their life with that sort of tourist feeding frenzy happening on their doorstep every day. And yet Paris seems to have maintained its soul, its sense of identity. So far it’s an identity we love! 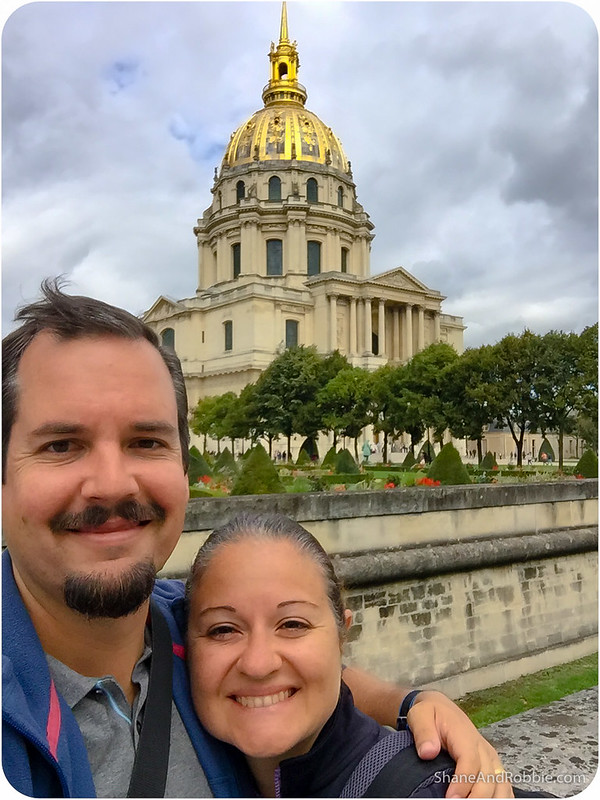