WE DROPPED BY MONTSERRAT EN ROUTE TO BARCELONA

We’re in Spain! To be precise, we’re in Monistrol de Montserrat, about 50km North of Barcelona in the Spanish region of Catalonia. We got here this afternoon, after a 3 hour bus journey that took us through the Pyrenees and out of Andorra. The scenery along the way was pretty spectacular and to top it off we got to visit the famed Monastery of Montserrat this afternoon, which, despite the rain, was amazing.

Our bus ride this morning took us past lots of dramatic mountains, green forests, red soil, and small isolated villages. It was interesting seeing the difference when we crossed into Spain. The biggest difference we noticed was how poor and more basic the villages in Spain were compared to Andorra; there is obviously far more wealth in the tiny nation of Andorra than in the small villages of rural Catalonia. It seems that, as small as it is, one of the benefits of Andorra being a sovereign state is that they’ve been able to set themselves up as a tax haven and a duty free shopping Mecca, thus ensuring a high standard of living for everyone in the country in the 21st century. For those in the Spanish Pyrenees, however, the economic hardships faced by Spain at large over the past few years have no doubt meant far less money to address the needs of small, rural communities. Add to that a national unemployment rate around 25% (higher in rural areas), and the differences between rich little Andorra and rural, outback Spain start to make sense. 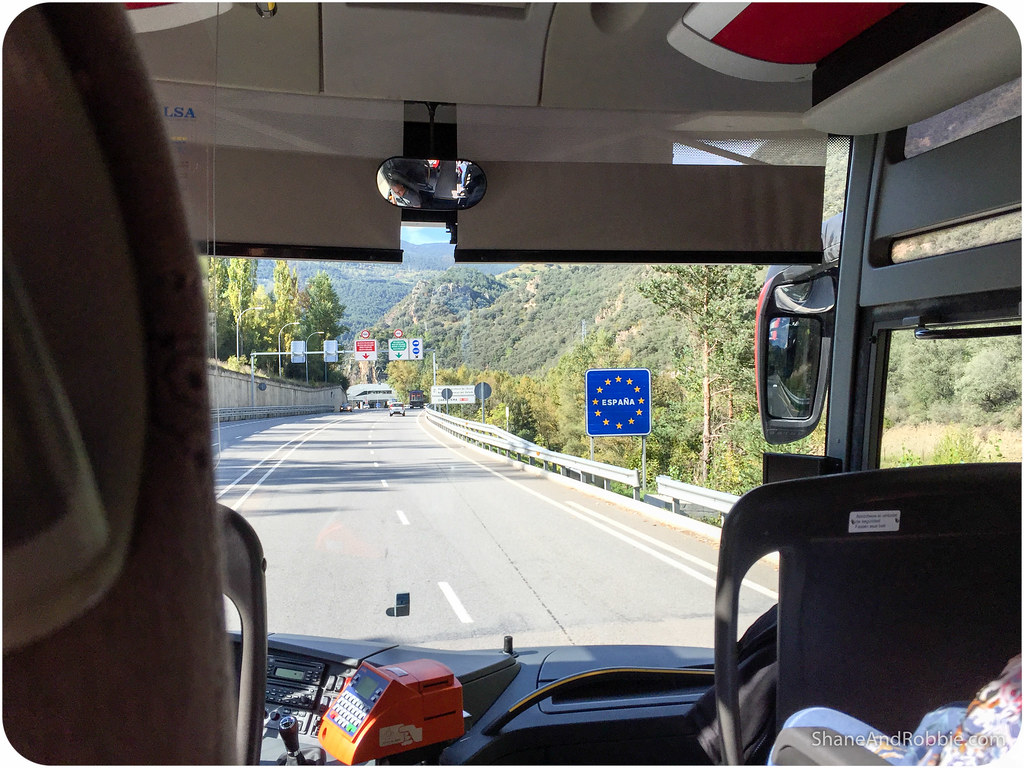 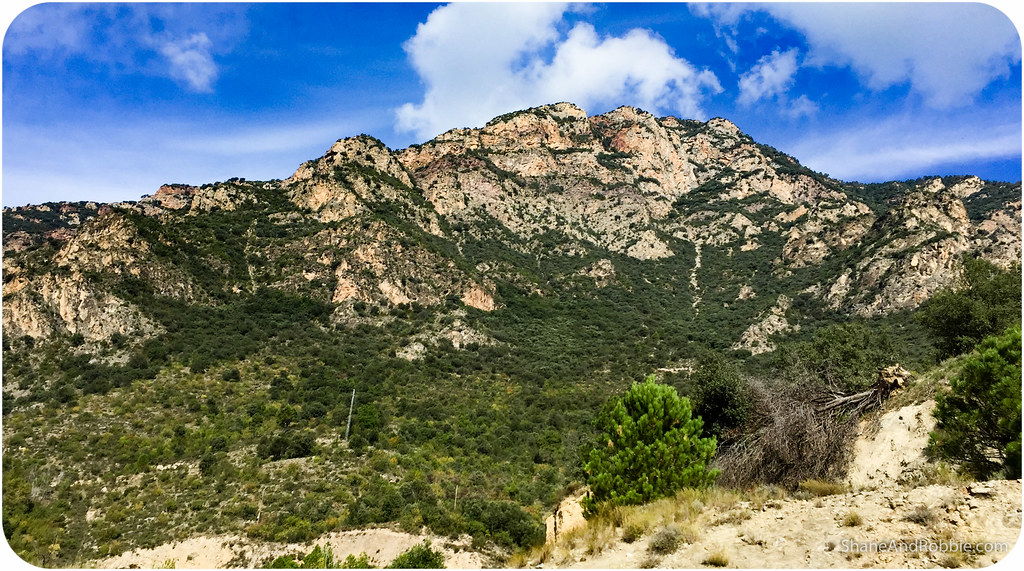 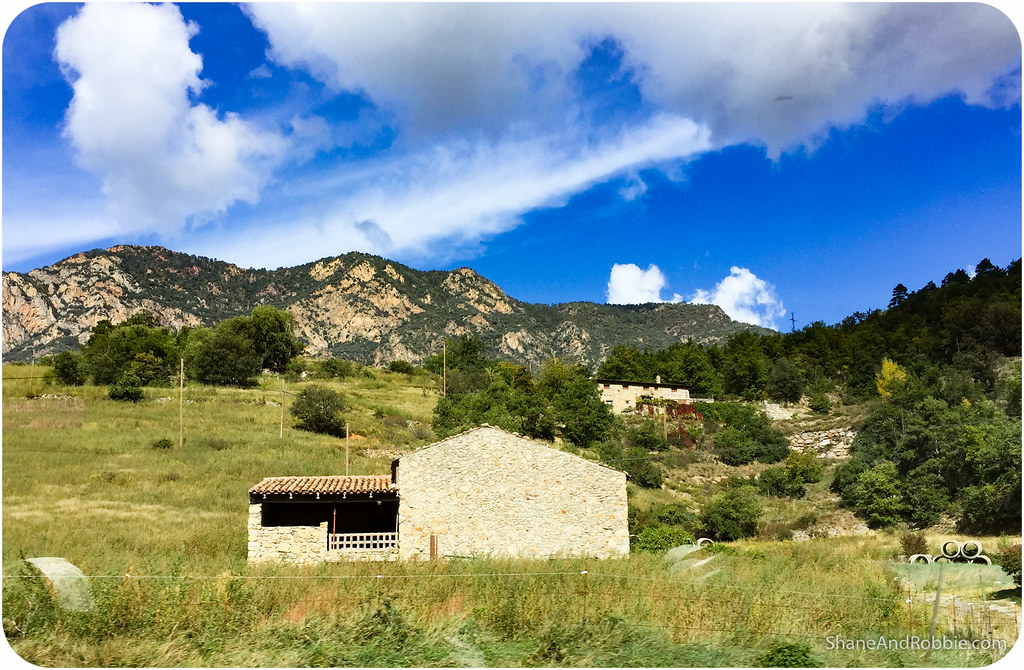 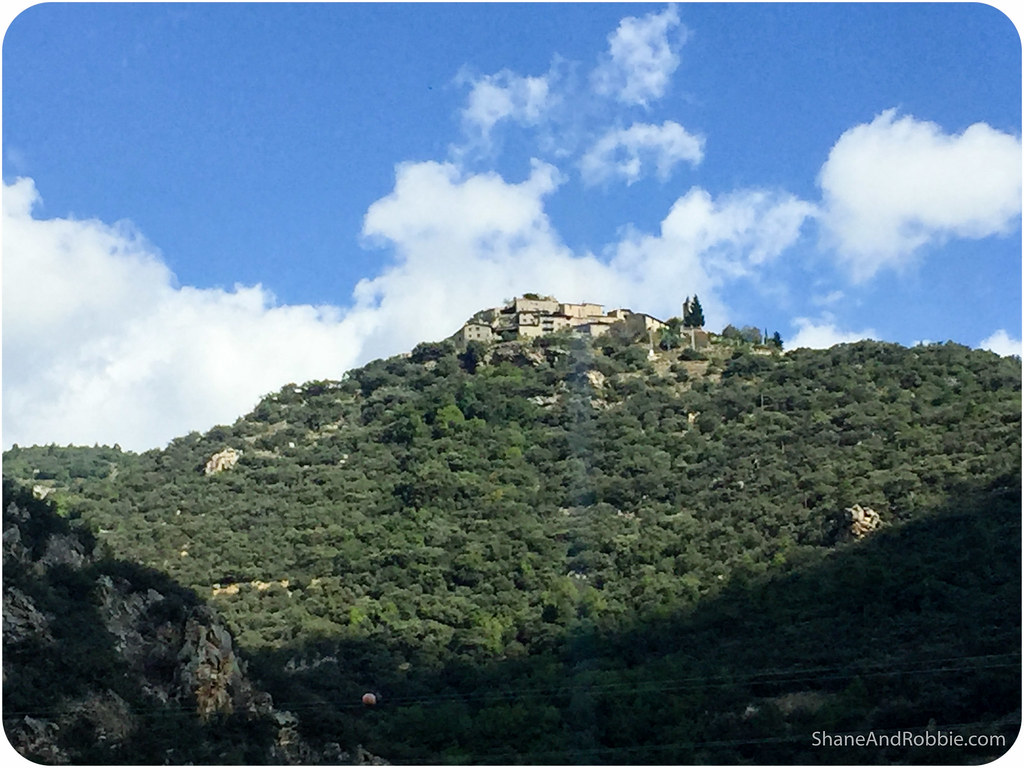 As we started to descend out of the mountains the morning’s blue skies turned cloudy however, and soon we were travelling through driving rain. Not at all what we expected from a part of Spain that has a reputation for being sunny and dry*!

*Barcelona, the capital of Catalonia, get more than 200 days of sunshine per year. 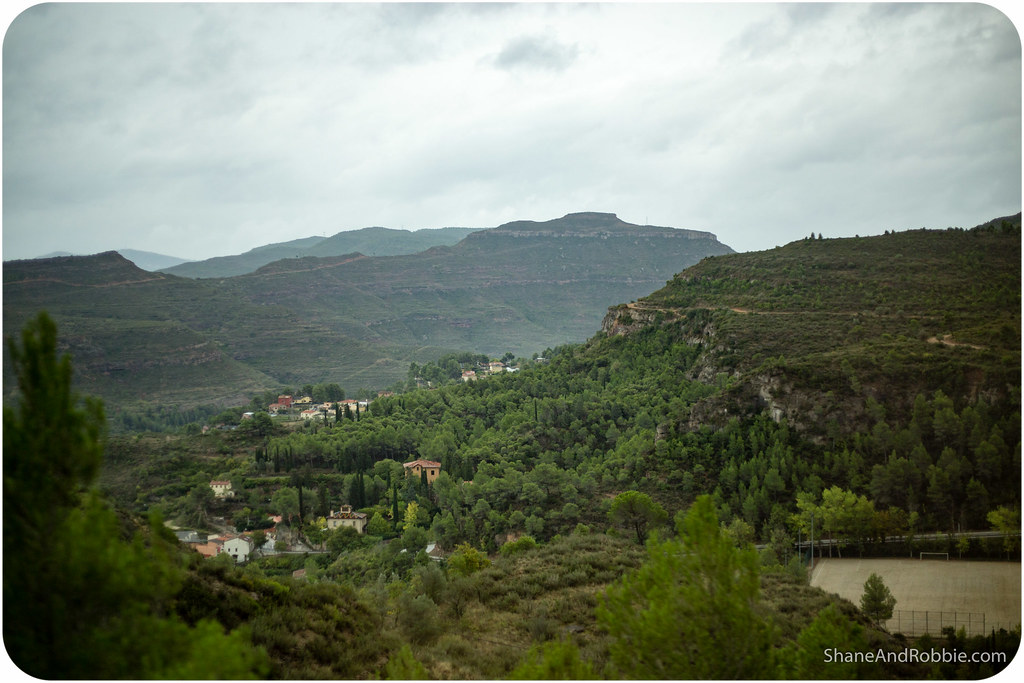 Our first major stop in Spain is Barcelona but rather than go straight in and explore the “big city” we hopped off at Monistrol de Montserrat, a small town nestled at the base of the mountain of Montserrat. Named for its many jagged peaks*, Montserrat is the highest mountain in the region (1,256m) and stands out dramatically against the skyline.

*”Montserrat” means “serrated mountain” in Catalan, the official language of Catalonia (alongside Spanish). 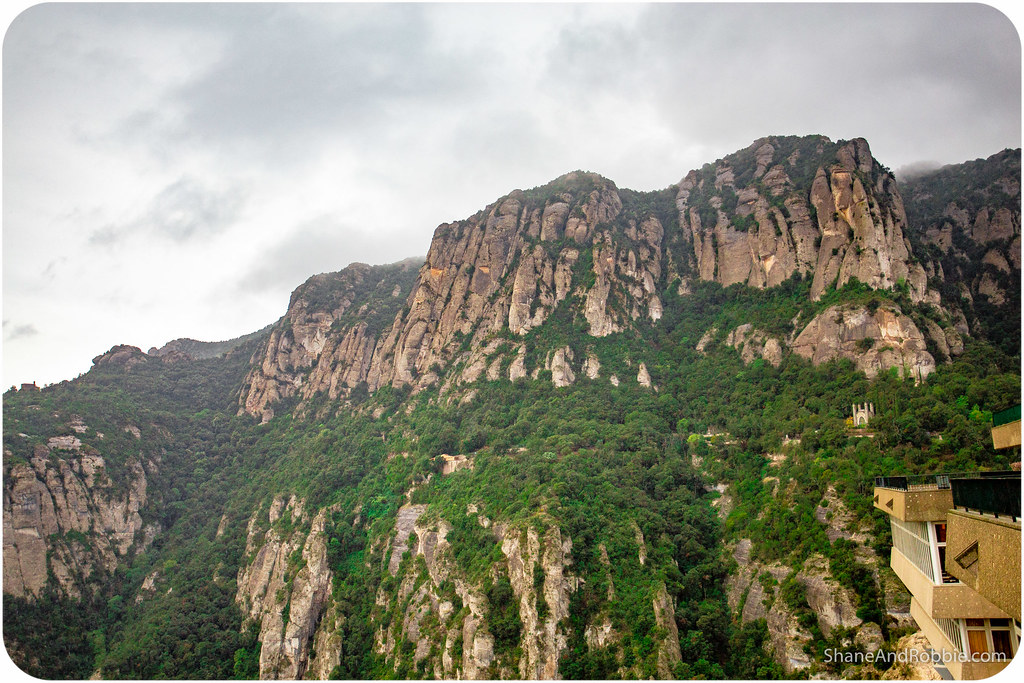 The 10km long Sierra de Montserrat mountain ridge was formed by an ancient river that deposited sediment, gravel sands, and pebbles into an ancient lake. When the lake dried up and the earth shifted, the sediment was pushed up and has been exposed to rain, wind, and the elements for the last 20 million years. Over the millennia the soft sedimentary rock has been eroded and carved away to form some very interesting shapes. 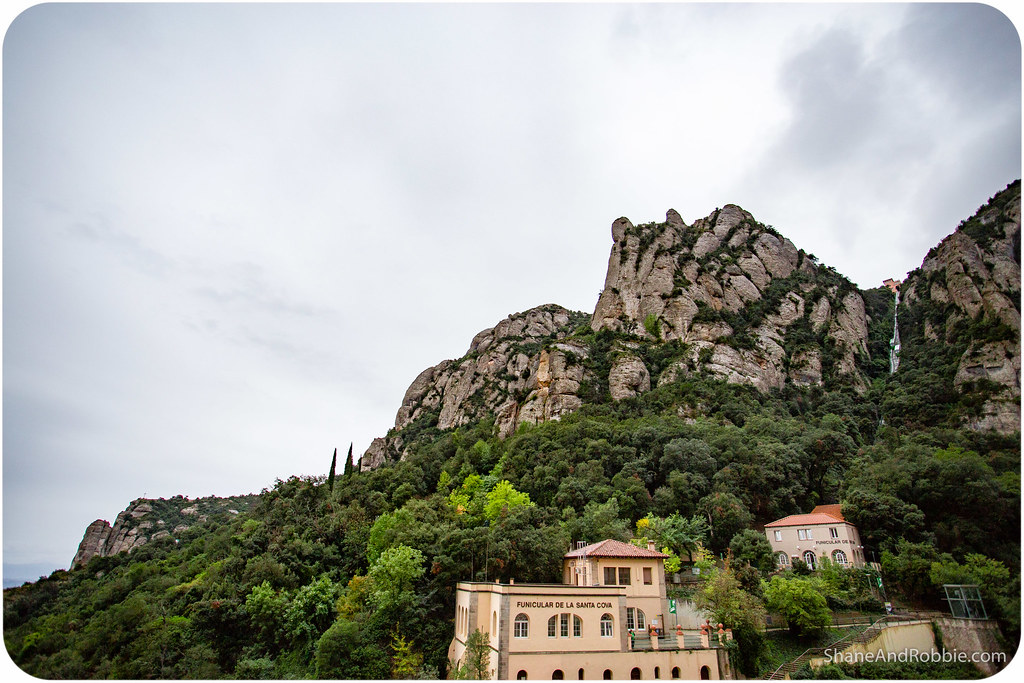 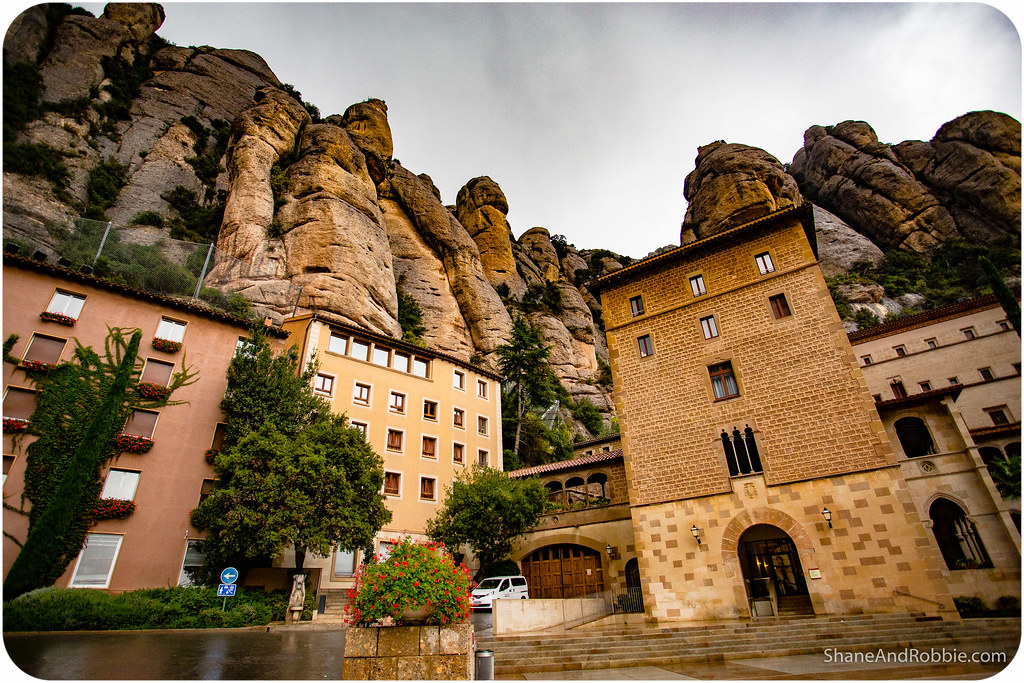 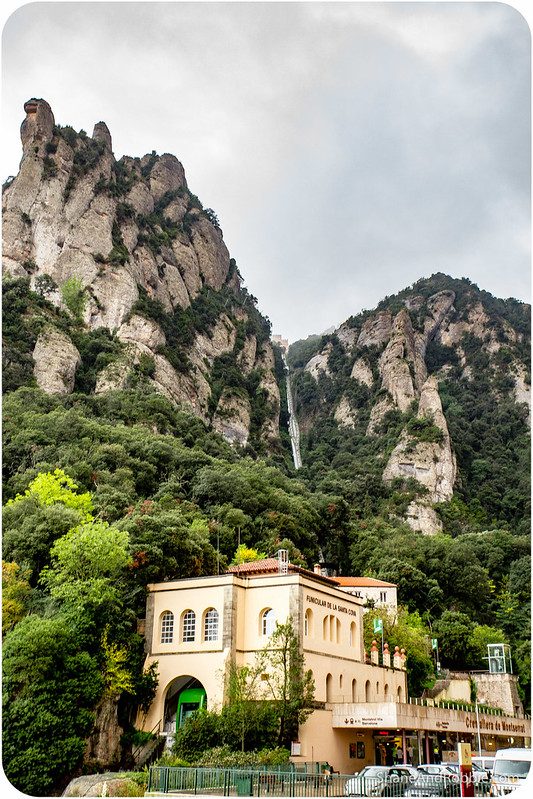 The mountain is well known as a great place to go hiking, to see amazing scenery, and as the site of the Benedictine abbey, Santa Maria de Montserrat. Due to the inclement weather we had to give the hiking a miss, but at least we got to see some of the glorious Catalan scenery and the Monastery of Monserrat. 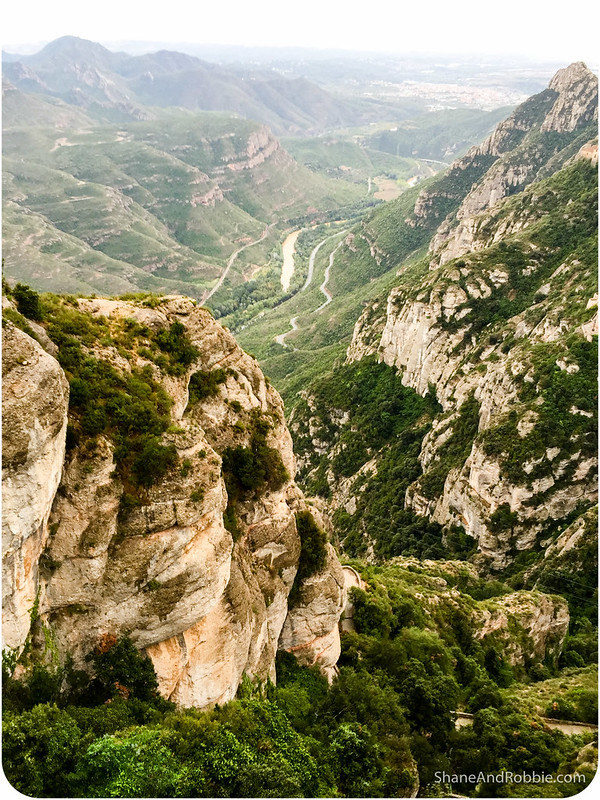 Records show that the mountain of Montserrat has been of religious significance since pre-Christian times, when the Romans built a temple there to honour the goddess Venus. This link to a feminine deity remains to this day, as the Monastery of Montserrat is dedicated to the Virgin Mary and is famed for enshrining the carved figure of the Virgin of Montserrat. 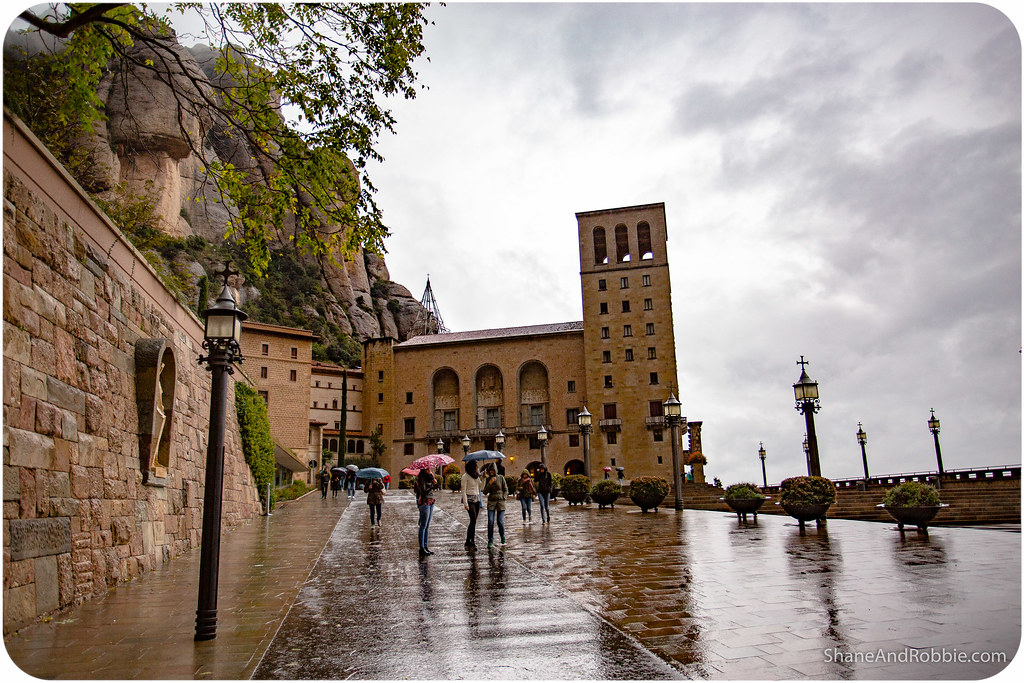 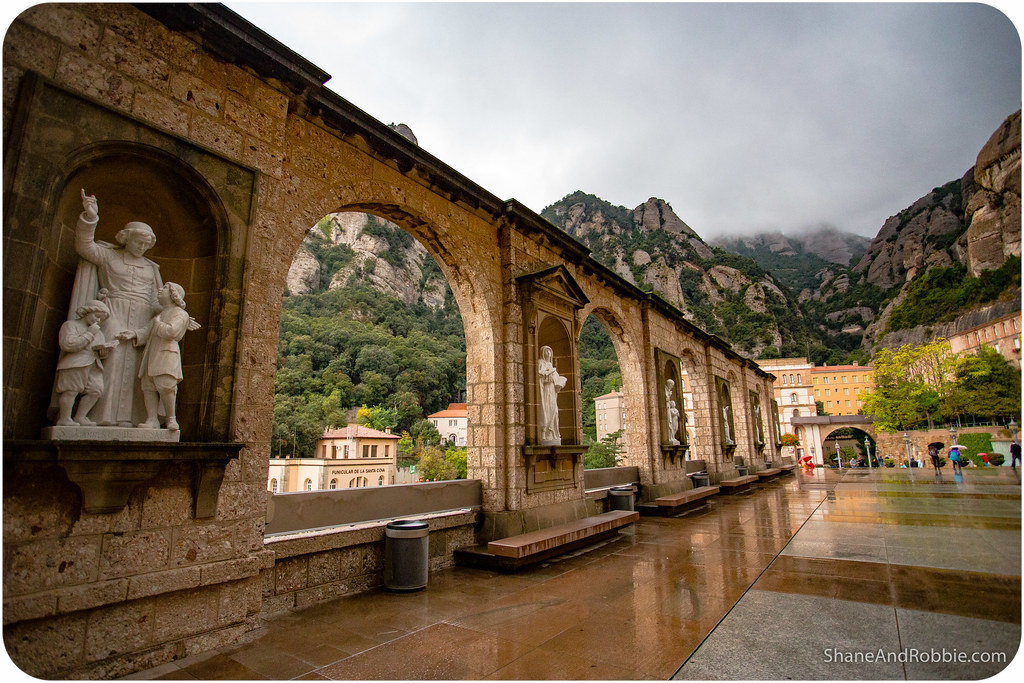 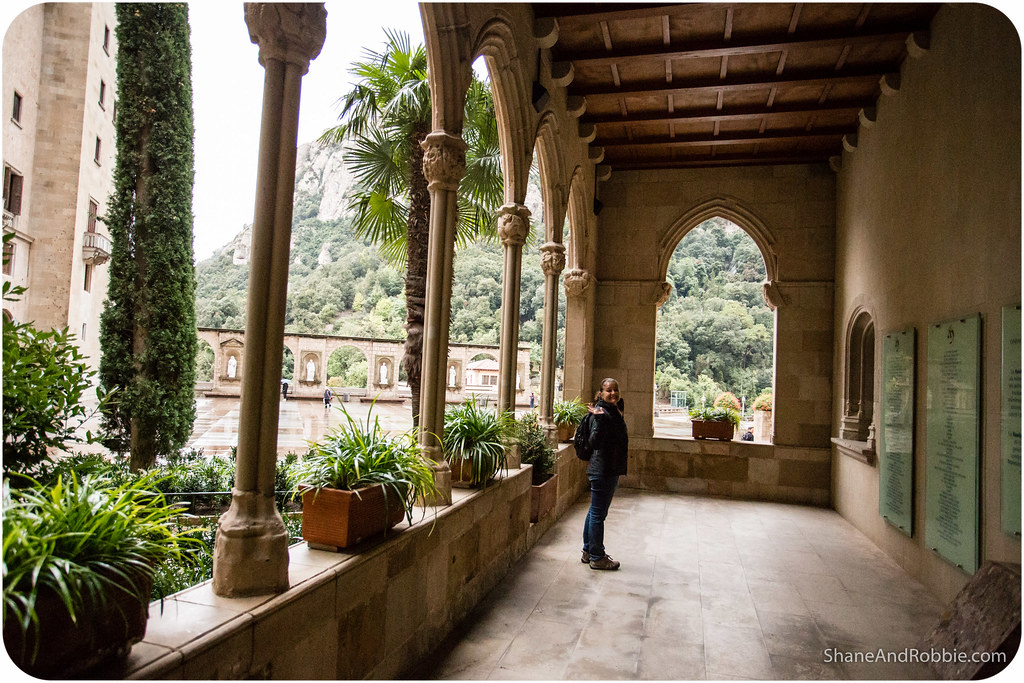 The Virgin of Montserrat is a statue of the Virgin Mary that was supposedly carved by St Luke in Jerusalem in the early days of Christianity*. What makes her unique is that she one of just a handful of black Madonnas in Europe, and millions of visitors come to Montserrat just to see her and touch her.

*The statue is more likely a Romanesque sculpture from the late 12th century, but to believers the exact dates don’t really matter. 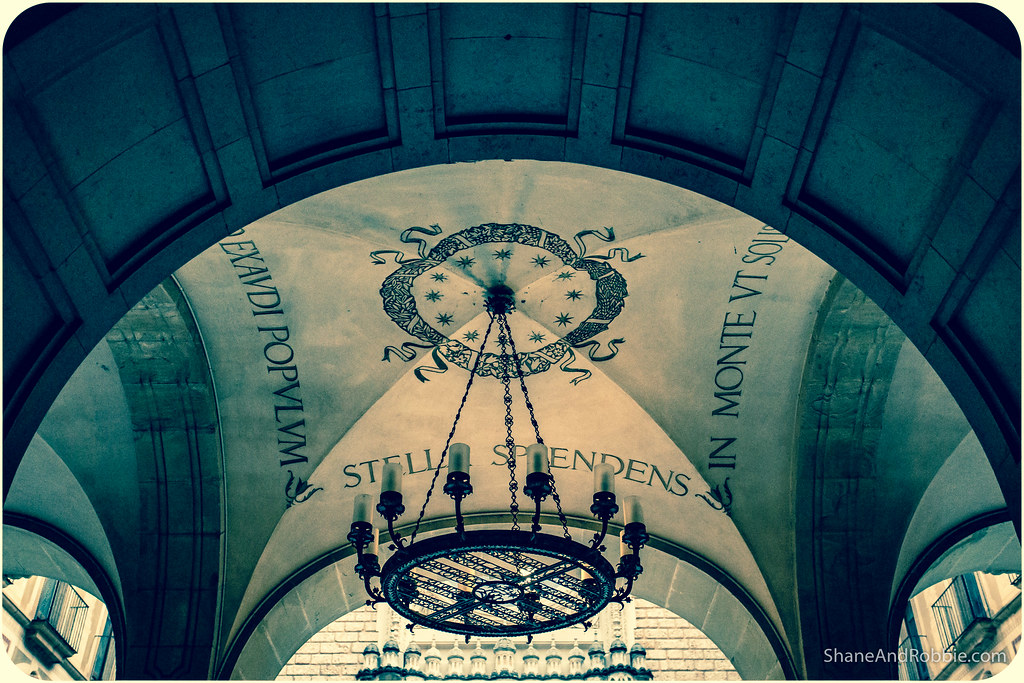 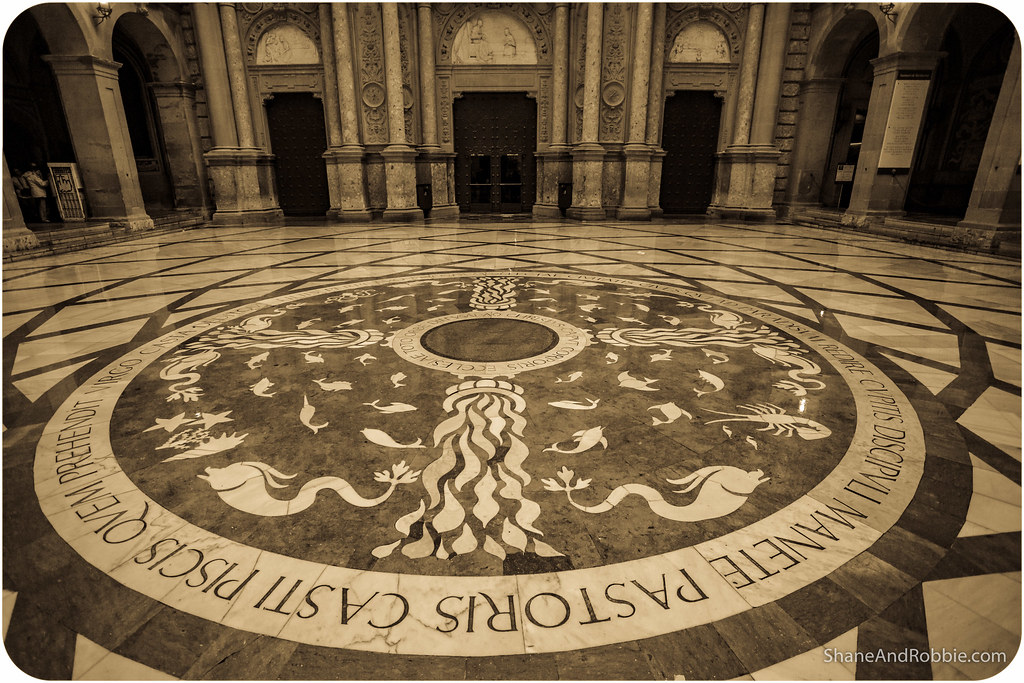 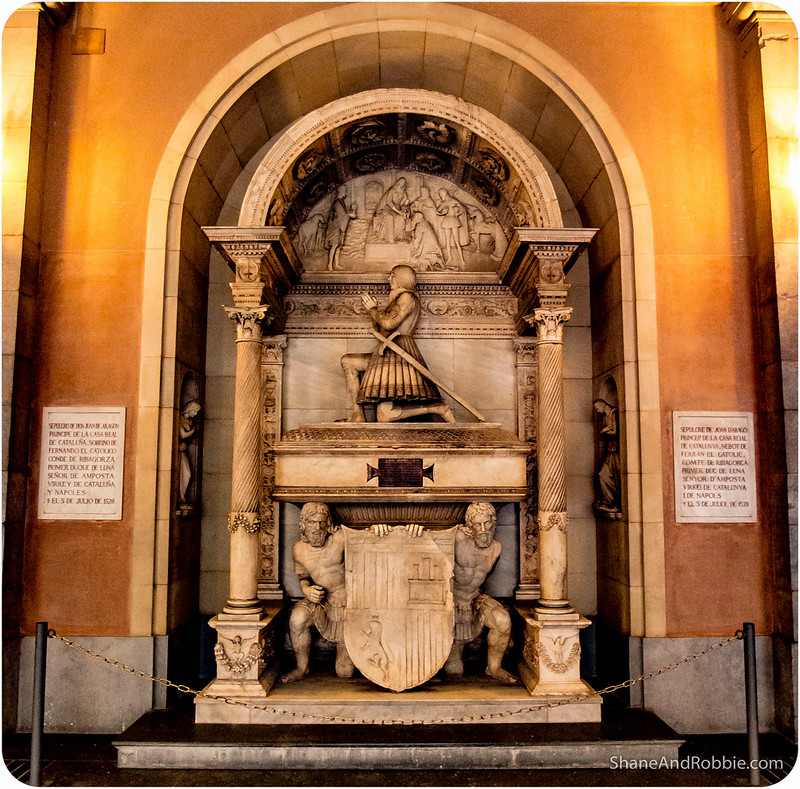 The statue is housed in the Basilica of Montserrat, a richly decorated church situated near the top of the mountain. Behind the alter in the Basilica there is a small chapel where the statue sits, surrounded by an alcove of gold. This is where the faithful go to touch the Madonna and ask for her blessings. We are not believers in that sense, but still tried to be respectful of the faith and passion with which people were approaching the icon. 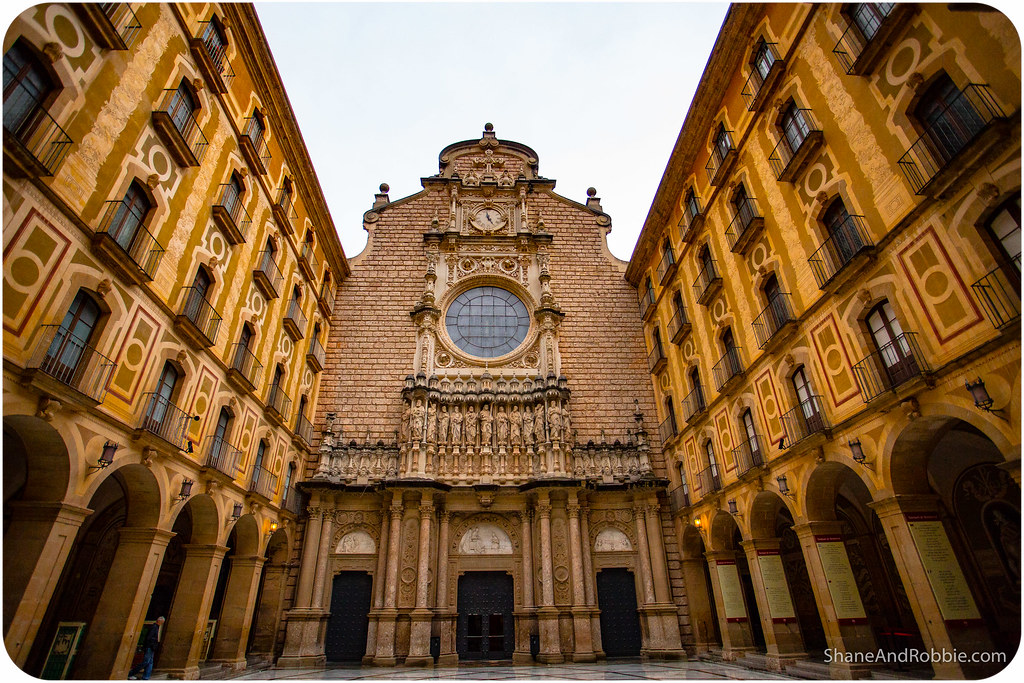 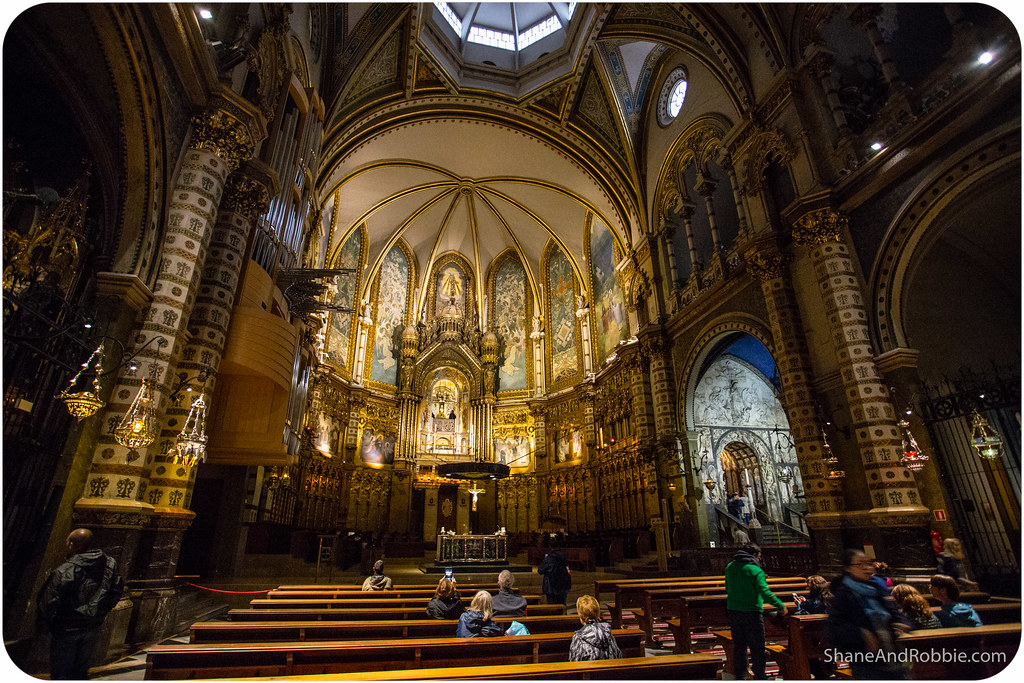 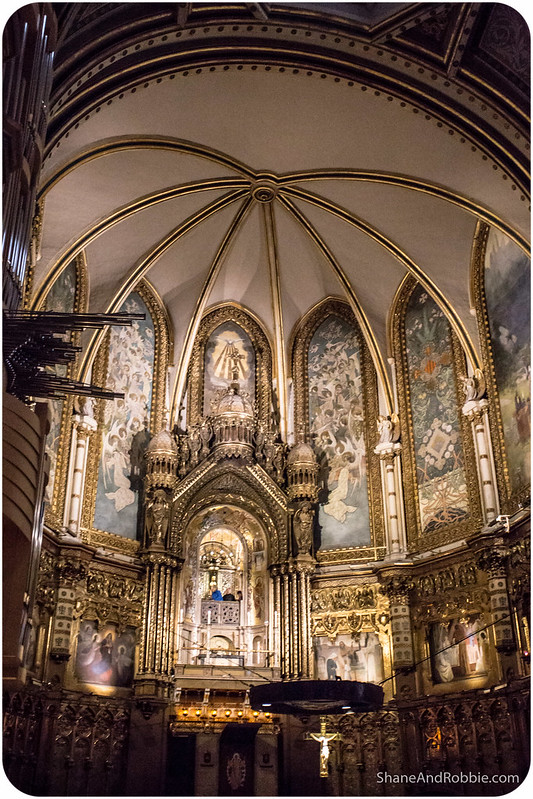 Legend has it that the statue was discovered by local villagers in a cave in 880AD. The villagers wanted to take the statue back down to their village to house it in their chapel, but when they tried to move it, the statue became inexplicably heavy and impossible to move. Taking this as a sign that the Madonna did not want to be moved, a chapel was built around her instead. When word spread of the Madonna, the site quickly became a pilgrimage site; in 1409 a Benedictine monastery, the Santa Maria de Montserrat, was established there to help guard and protect the black Madonna of Montserrat. 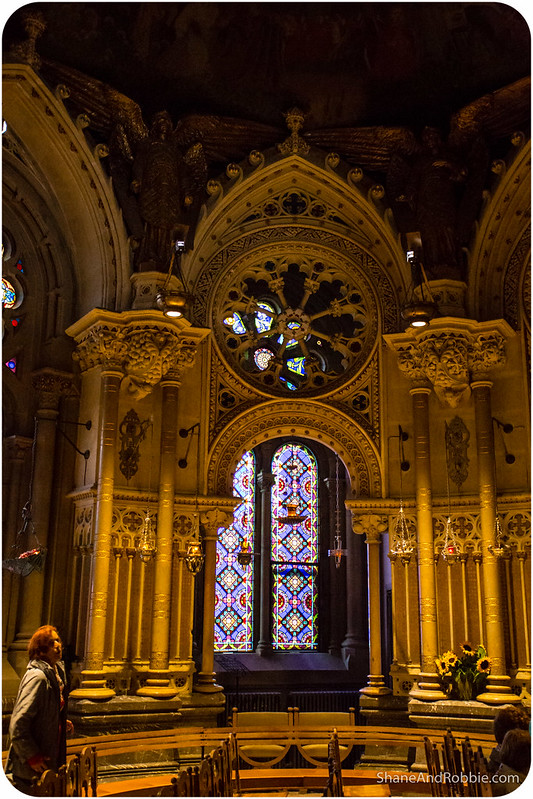 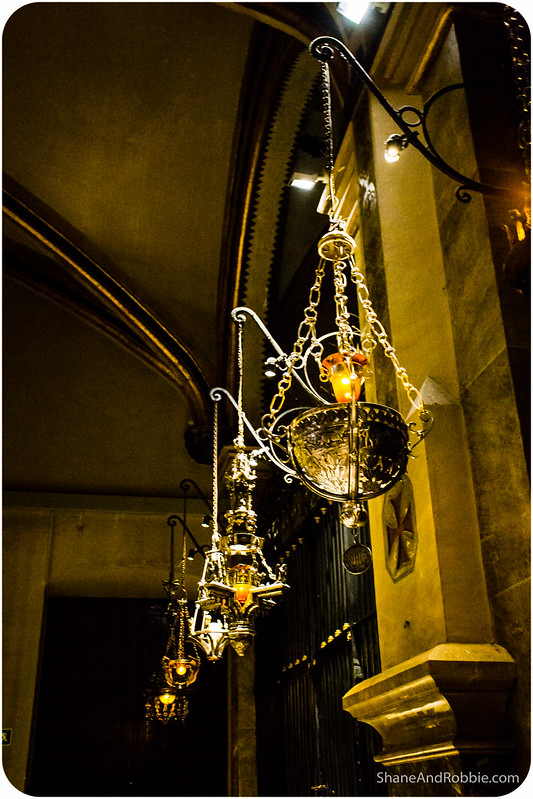 We spent some time enjoying the serenity of the Basilica on Montserrat, but then a bus load of tourists came in for a tour of the church and that was the end of that. Outside the Basilica we stopped by the Museum of Montserrat, which houses an impressive array of paintings and sculptures. The museum was established in the 19th century, when the current monastery was built. Turns out that Napoleon’s troops destroyed the original Medieval monastery in 1811 in retaliation against the Catalan guerrilla fighters who’d hidden up here. When the new Montserrat Basilica was erected in the late 19th century many donations of artwork poured in, the vast majority from Catalan donors. What wasn’t used to decorate the Basilica now hangs in the museums. 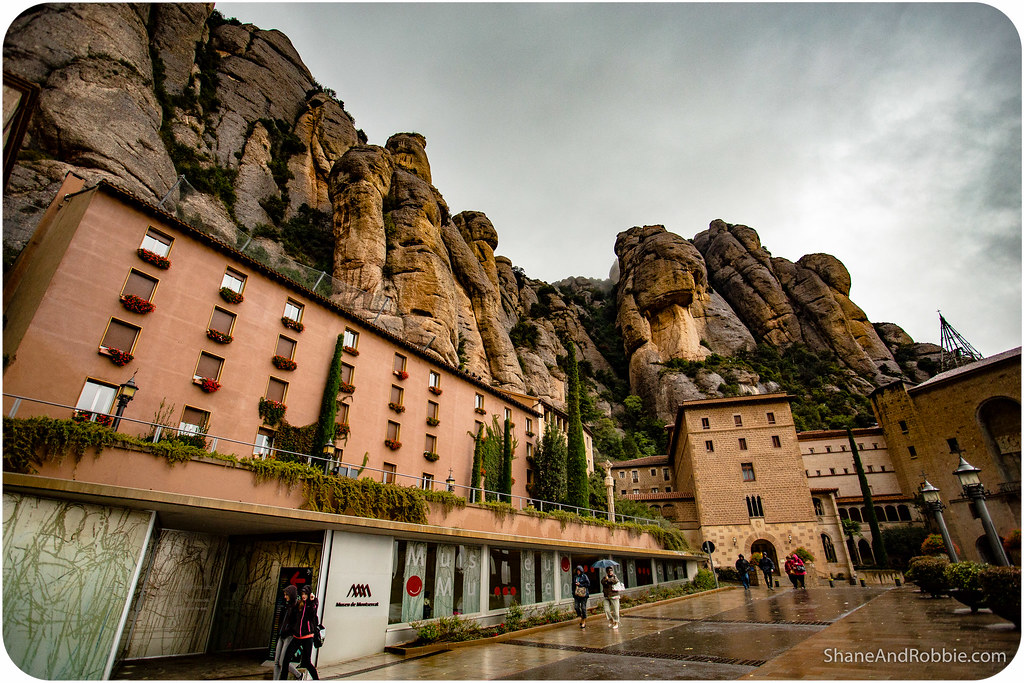 The Monastery of Montserrat has a history of being a harbour for Catalan rebels and nationalists; during the Spanish Civil War, for example, Republican forces killed a number of Catalonian rebels who had been hiding out at Montserrat. And during the rule of Francisco Franco, Santa María de Montserrat was used as a sanctuary for Catalan scholars, artists, politicians, and students; Franco’s men were often waiting for wanted people a few miles down the road. The association between the Monastery of Montserrat and Catalan nationalism was particularly poignant for us as we have arrived in Catalonia just as the region has voted on the issue of independence. 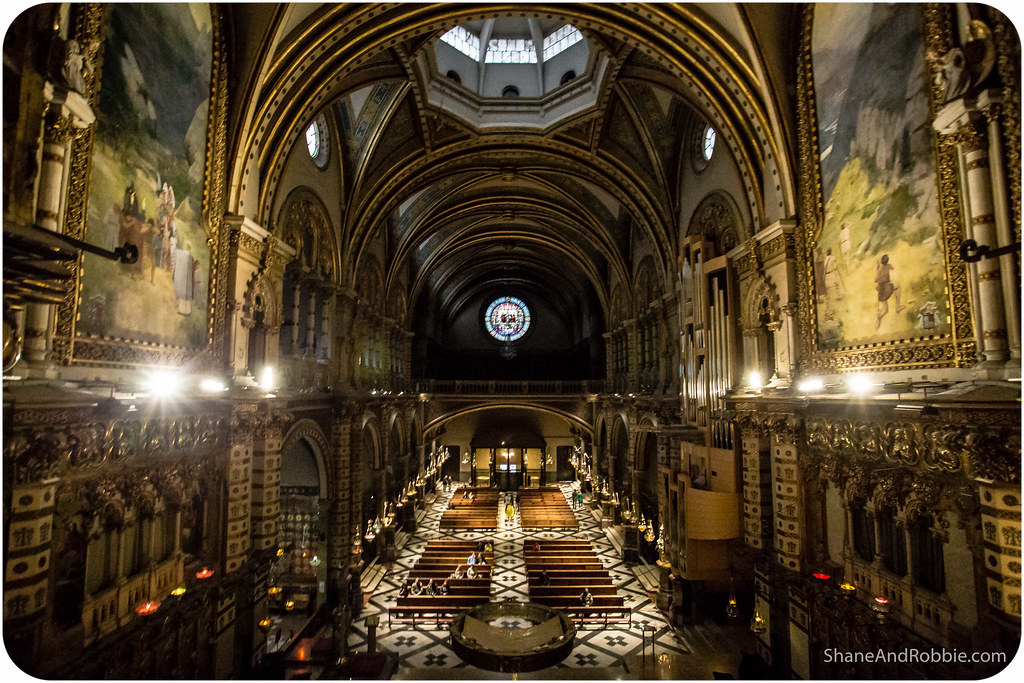 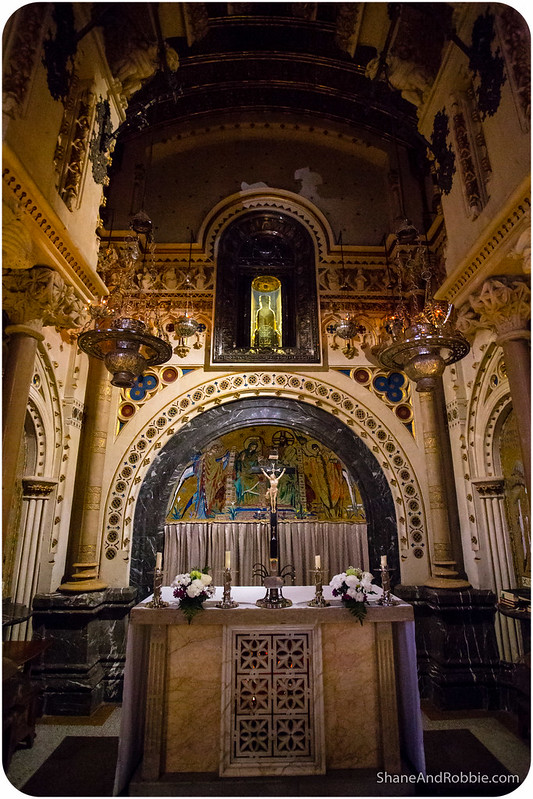 Watching the news in Andorra we learnt that Catalans went to the polls on Sunday last in a crucial regional referendum on independence. The issue at hand: should the wealthy region seek to break away from Spain? Votes are still being counted but indications are that it’s close, with close to a 50/50 split. Seems half the people are in favour of independence for nationalistic reasons whilst others want to remain part of Spain to ensure ongoing economic stability in the region. We asked a couple of locals about it today and it was really interesting hearing their diverse opinions on the matter. Interesting times indeed… 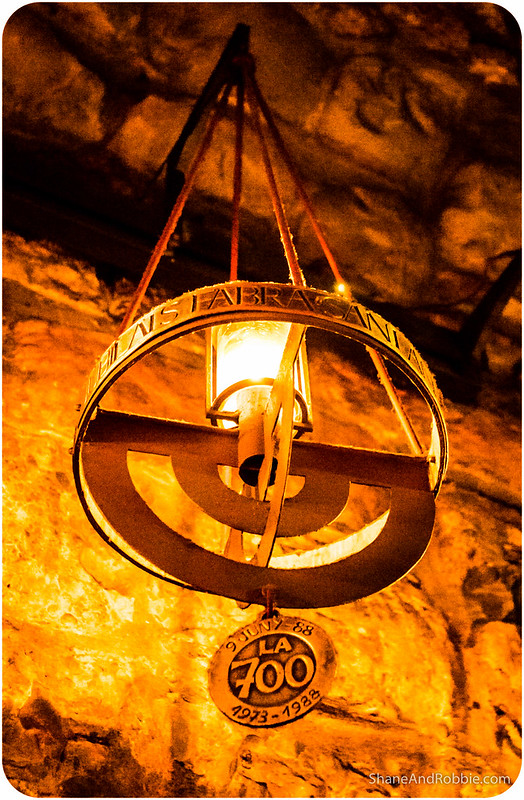 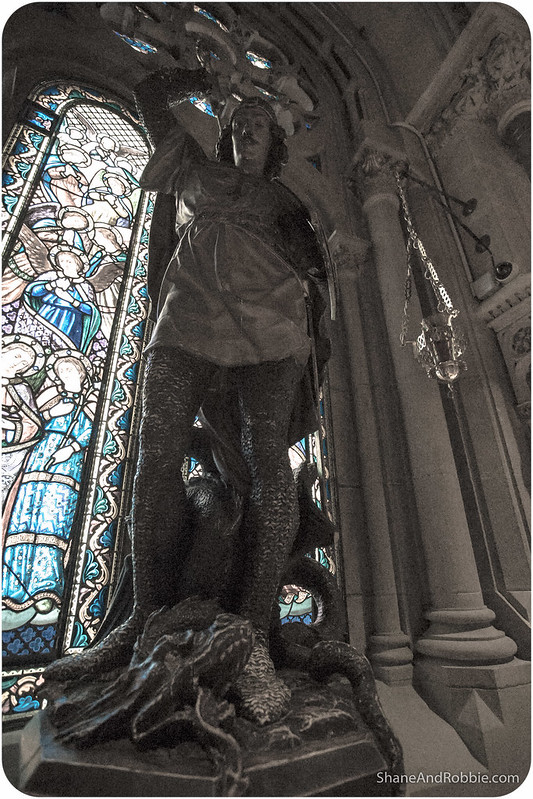 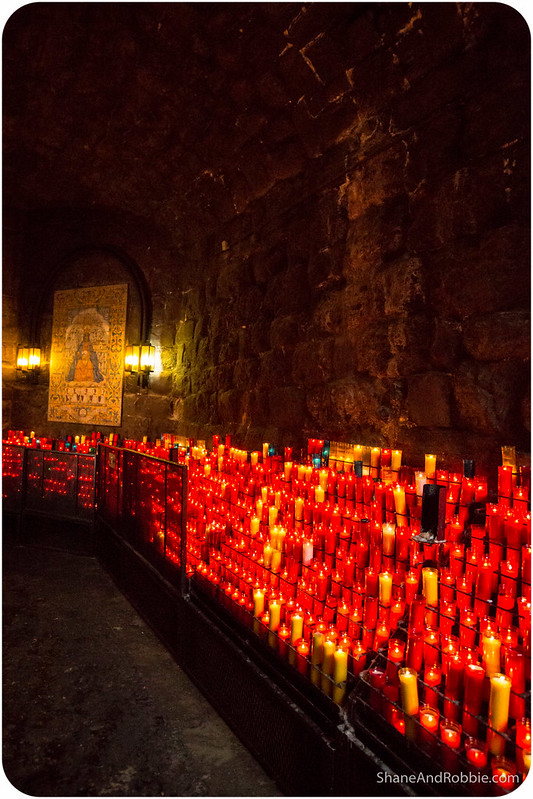 After our rather wet and windy afternoon visiting the Monastery of Montserrat we headed back to our guesthouse for a quiet evening in. Hopefully the rain will disperse, leaving us with clear skies for our first day in Barcelona! 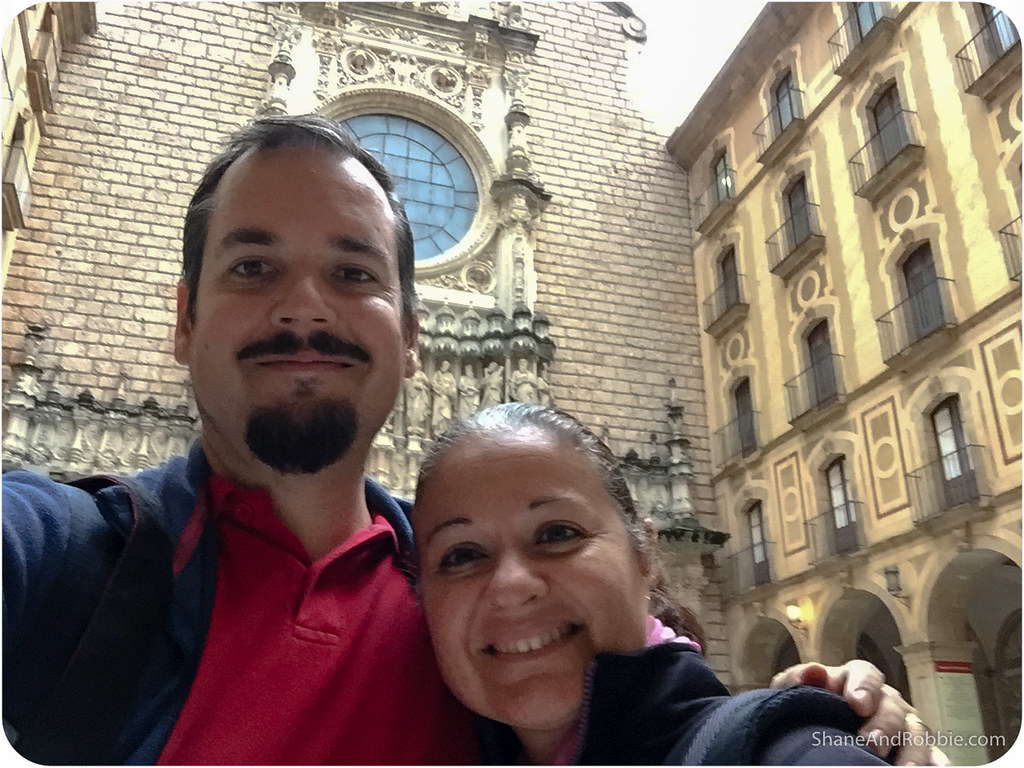