These days most people come to Portugal for the sunshine, surf, and sand; this country’s beaches have become one of its biggest draw cards. And with good reason – Portugal has miles of uncrowded, unspoilt beaches, and it’s pretty cheap as far as European destinations goes. We’re not here for a seaside holiday, however. We’re here to see what Portugal has to offer in the way of history, culture, architecture, food, drink, and good times. And so far, it seems this small nation packs quite a punch! 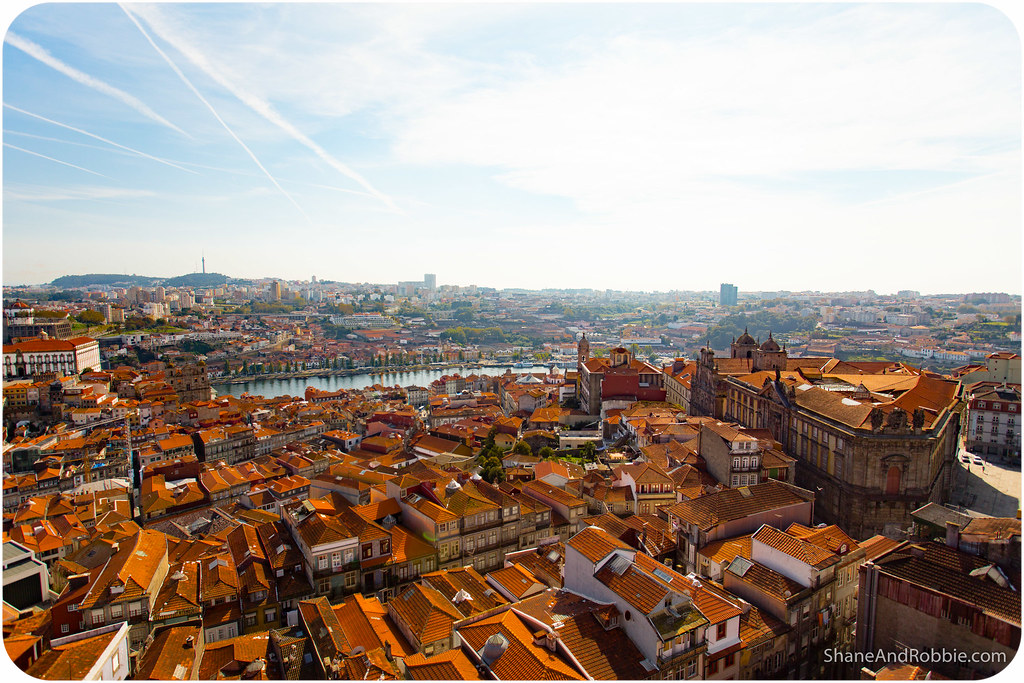 It seems that Spanish trains spend more time NOT running than on the track, forcing us to once again ditch the Eurail Passes today and use buses to make our way from Santiago de Compostela (Spain) to Porto (Portugal). Most of the people on the bus with us were pilgrims, many of whom had finished their Camino and were heading to Portugal for some well-earned R&R. Unfortunately some of our fellow passengers hadn’t thought to bathe or wash their clothes before jumping on a bus, and man did they STINK. Like 6 weeks and 800km of stale sweat and toe jam. As much as we TOTALLY respect the accomplishments of people who do the Camino de Santiago, it was really hard not to turn our noses up when these 2 walkers hopped on board. Luckily they ended up sitting far enough away from us that the stench became a background thing, but man did we feel sorry for the people around them…

Fortunately the scenery was beautiful and soon the rolling green hills of rural Galicia had distracted us from the background stench. The vistas got even better when we crossed the border into Portugal and the Atlantic Ocean appeared to our right. 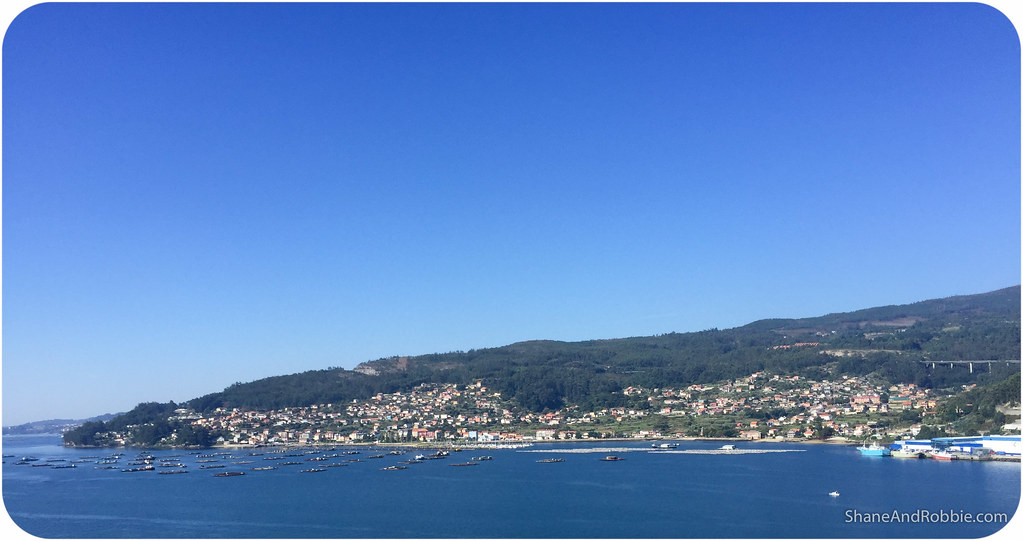 Famed for its seafaring explorations, Portugal was once a powerful kingdom that controlled important trading routes across the world – it was the Portuguese after all, who introduced spices like cinnamon and chilli to Europe; who opened up important trade routes into Asia; and who charted the way around Africa’s Cape of Good Hope. Their naval prowess made the country wealthy, especially during the 15th to 18th centuries. Modern-day Portugal may be less prosperous, but it certainly seems charming and REALLY laid back – especially here in Porto, our first stop. 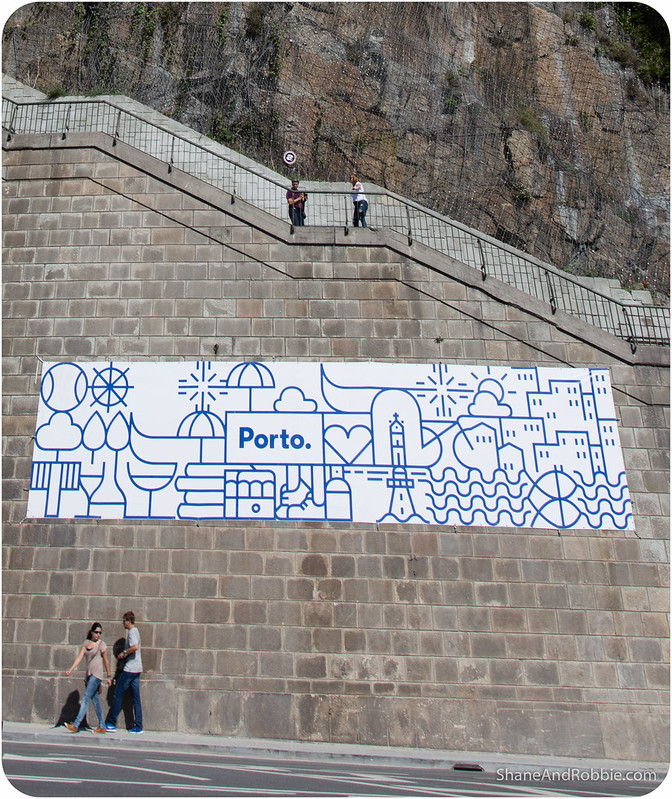 Located along the Douro River estuary in Northern Portugal, Porto is the country’s second-largest city (population: ~2.5 million) and has historically been one of the most important naval, commercial, and industrial centre in Portugal. This is also one of the oldest European towns, having been continuously inhabited since at least the 4th century, when the Romans called it as Portus Calle*.

*So important was Porto as a naval base and trade centre that Portugal is essentially named after Porto – Portus Calle was later abbreviated to Portucale, which then became Portugal. 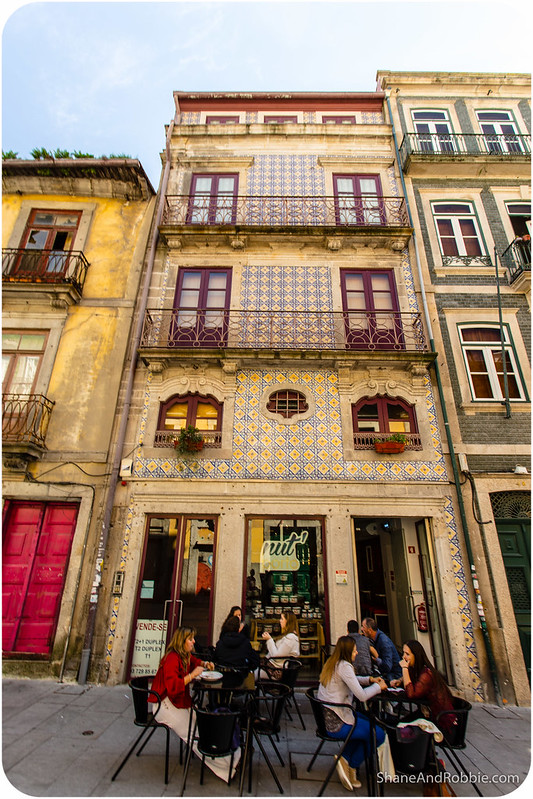 We’re here in Porto for a few days to see the city proclaimed as Europe’s “Top Urban Destination” last year, and to explore a bit of the Duoro Valley just inland from Porto. Our home-away-from-home whilst we’re here is a cute little budget hotel on the fringes of the old town. It’s a great hotel, very modern and chic, situated in an Art Déco building that used to be cinema. Very stylish – and yet incredibly cheap*!

*Portugal’s bargain prices are very welcomed as the Aussie dollar is on a downward turn that means every meal and night’s accommodation is costing us 15% more than when we set out in April. Yikes! 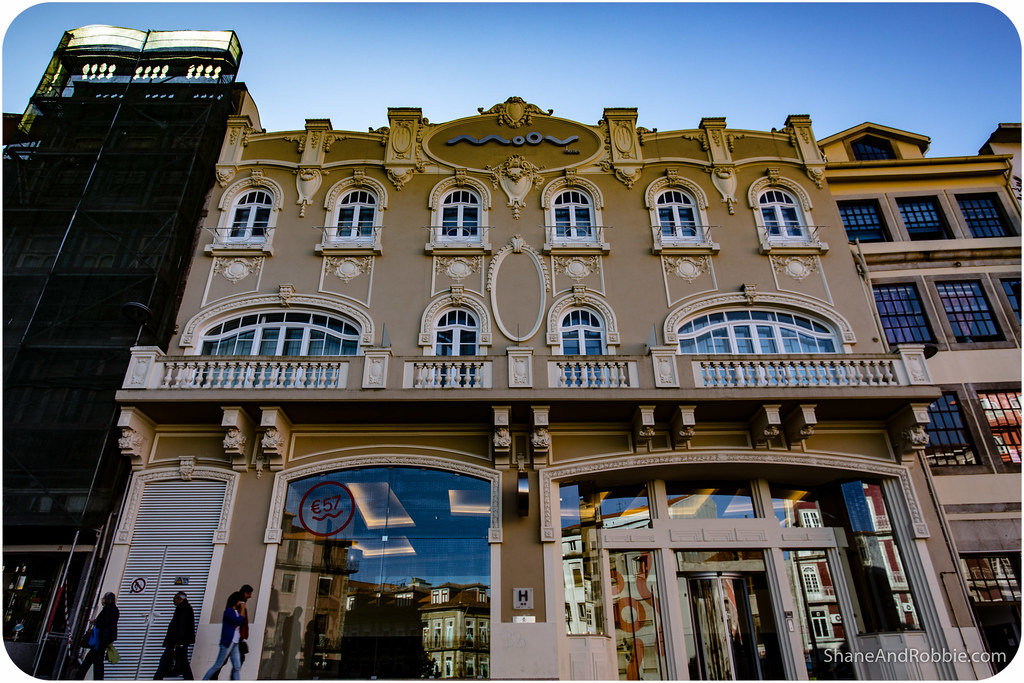 After checking in and dropping our stuff off, we set out to see a bit of Porto. First, however, we stopped to refuel with an iconically Portugese snack: pingos and pastels de nata. Better known as Portuguese tarts to us, pastels de nata are rich, custardy tartlets of goodness that are ubiquitous here. And they are seriously yummy! Apparently they were created by some nuns as a way of using up the egg yolks left over from laundry day (convents and monasteries used to use egg whites for starching their clothes). Whatever their origins, one thing’s for sure, Portuguese tarts are divine! 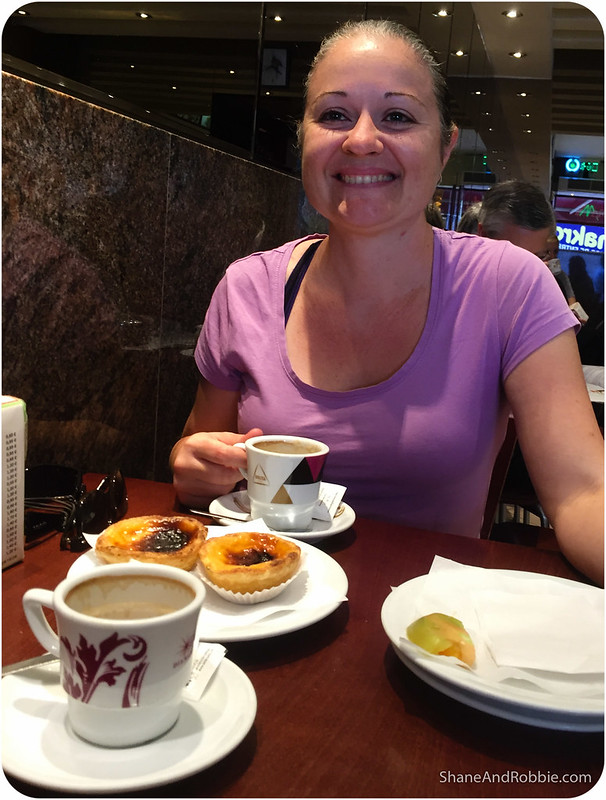 Our hotel sits in the newer part of town, so the streets here are wide and tree-lined. They’re also far newer than those in the Baixa, the oldest part of Porto. Our wanderings this afternoon were centred around these newer streets, starting with Rua Santa Catarina. This shop-lined, pedestrian street is lined with stores and cafés and was thronging with people – locals and tourists alike. 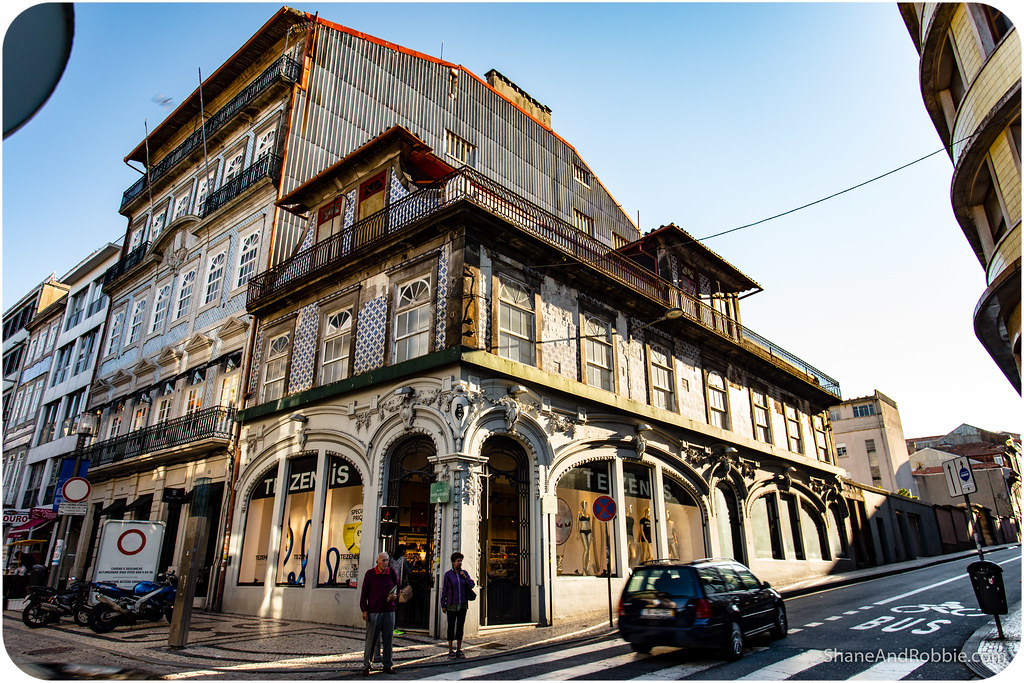 Many of the buildings lining the street had tiled frontages, giving us our first views of the famed Portuguese art of azulejo. Azulejos are essentially tiled mosaics and are found on the interior and exterior of churches, palaces, houses, schools, restaurants, bars and even railways or subway stations. Derived from the Moroccan art of zelige (the Moors were here for almost 800 years after all), azulejos are a beautiful form of architectural decoration that brings so much colour to a town like Porto. 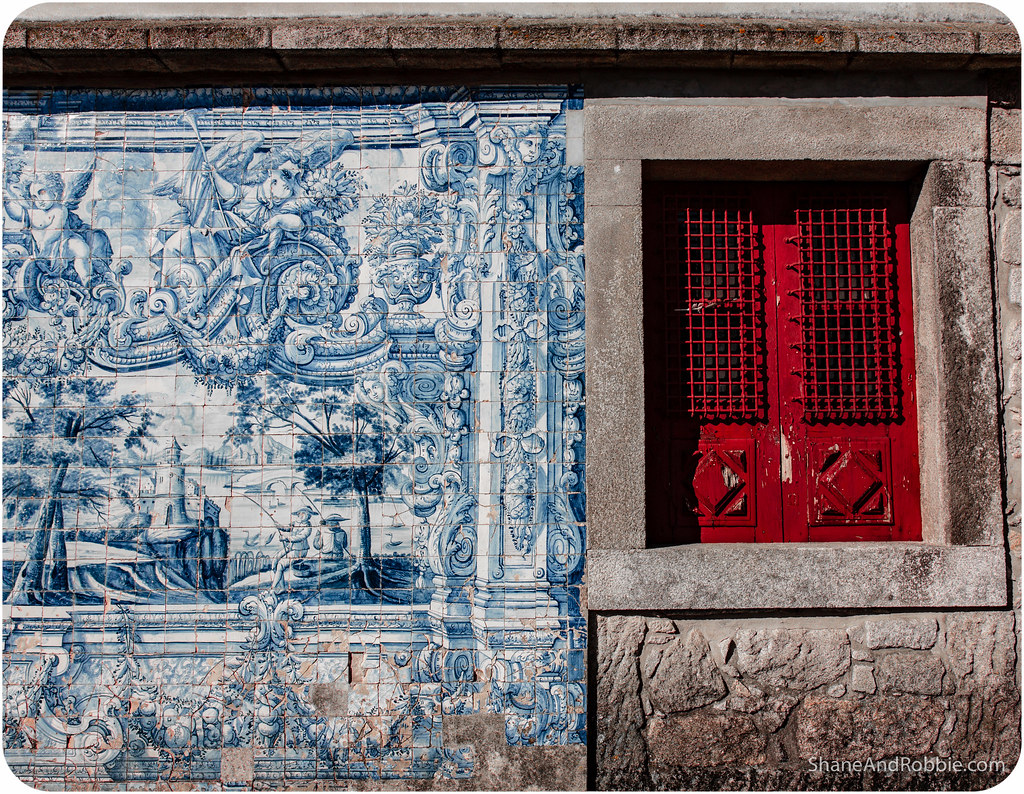 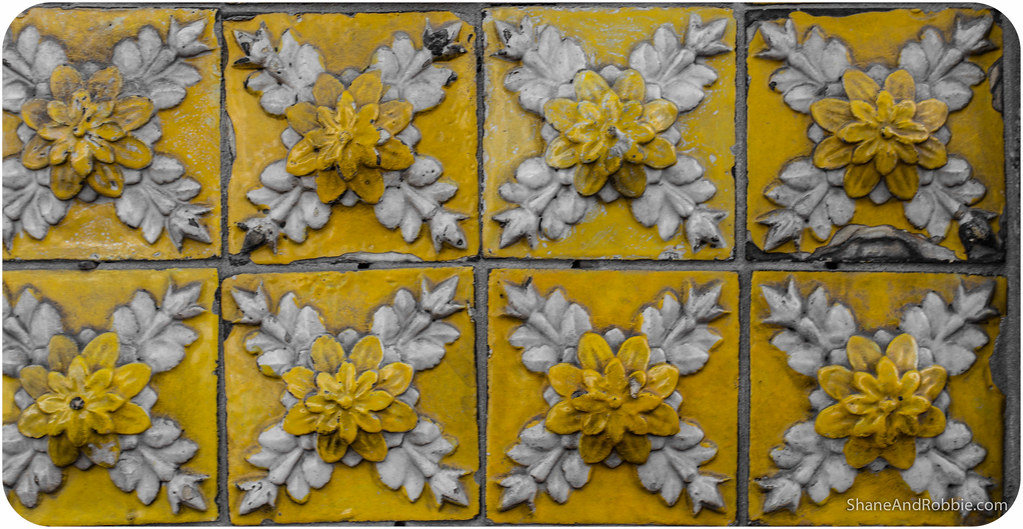 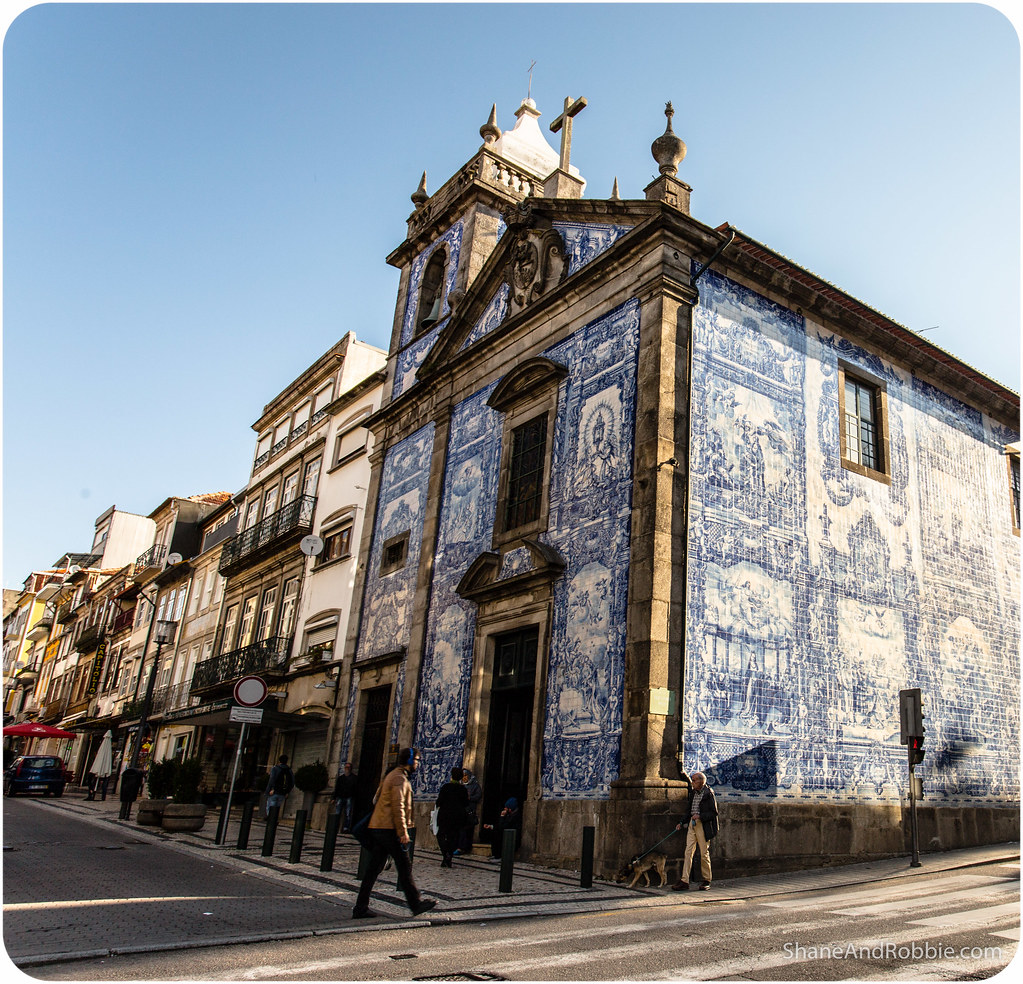 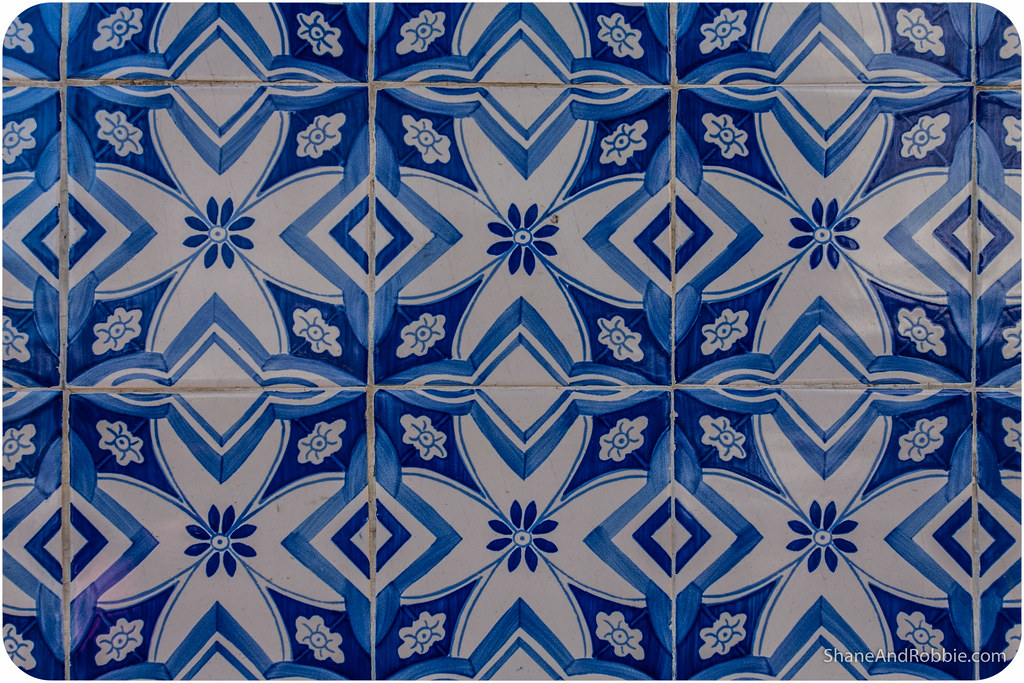 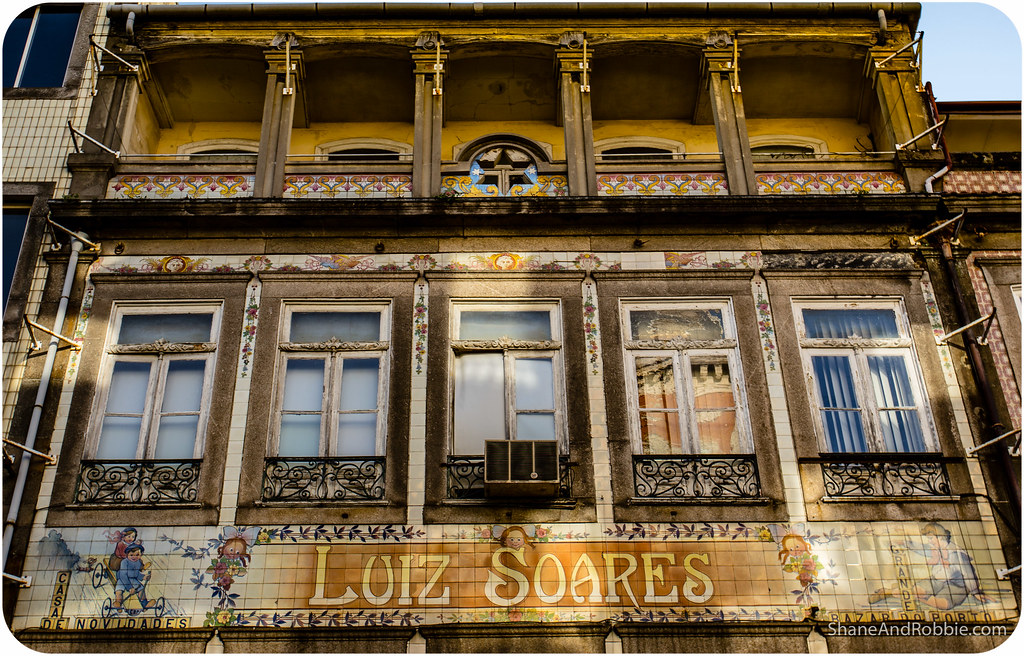 One of the most beautiful examples of azulejo we saw this afternoon was on the front of the Igreja de Santo Ildefonso. This 18th century church was built in a Baroque style and features a lovely facade of azulejo tile work. 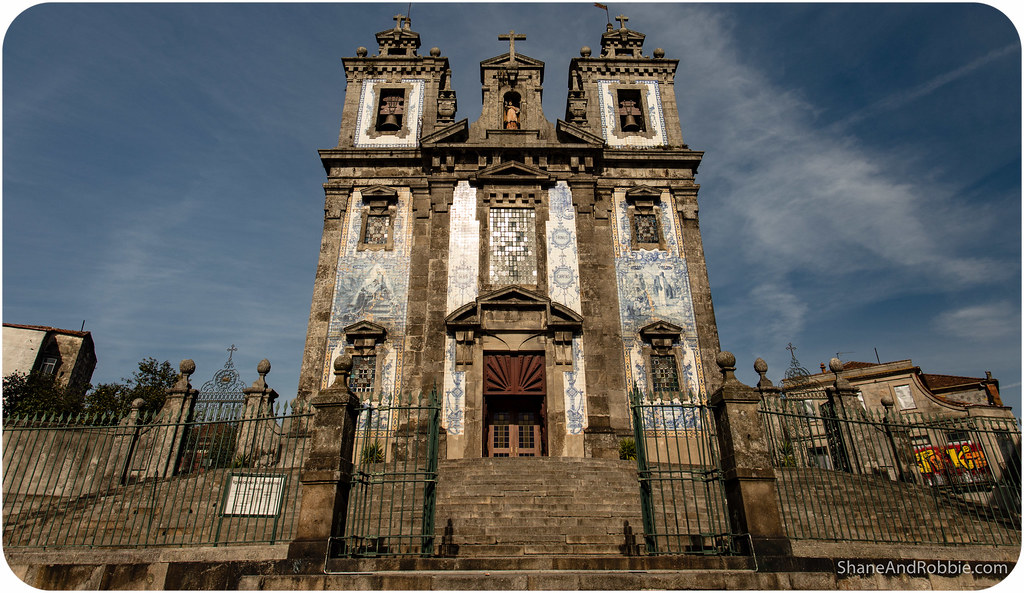 Even more stunning was the decorative tile work inside the São Bento Railway Station. Opened in 1916, the station is known for its azulejo panels that depict historical events like the Battle of Valdevez (1140), and the Conquest of Ceuta (1415). We had gone to train station just to see how horrendous the queues were for making seat reservations*. Imagine our surprise when we saw NO QUEUE! Imagine our even greater surprise when the whole process of booking our seats for the next couple of train journeys took all of 6 minutes! And the guy behind the counter assured us that the trains here in Portugal ARE running and that they even have food and free wifi on board! Sweet Jesus – could it be possible?! No queues, trains that actually RUN, and modern on-board facilities?? Maybe the Spanish RENFE guys should come have a chat to Comboios de Portugal, just to get some ideas on how to run a rail network! Just a suggestion…

*Even with a Eurail Pass, we still have to make seat reservations for some trains. It’s no big deal and usually free or cheap, in Spain however seat reservations were sometimes more expensive than just buying a ticket outright and making 2 train reservations at the Sants station in Barcelona took us almost 2 hours. 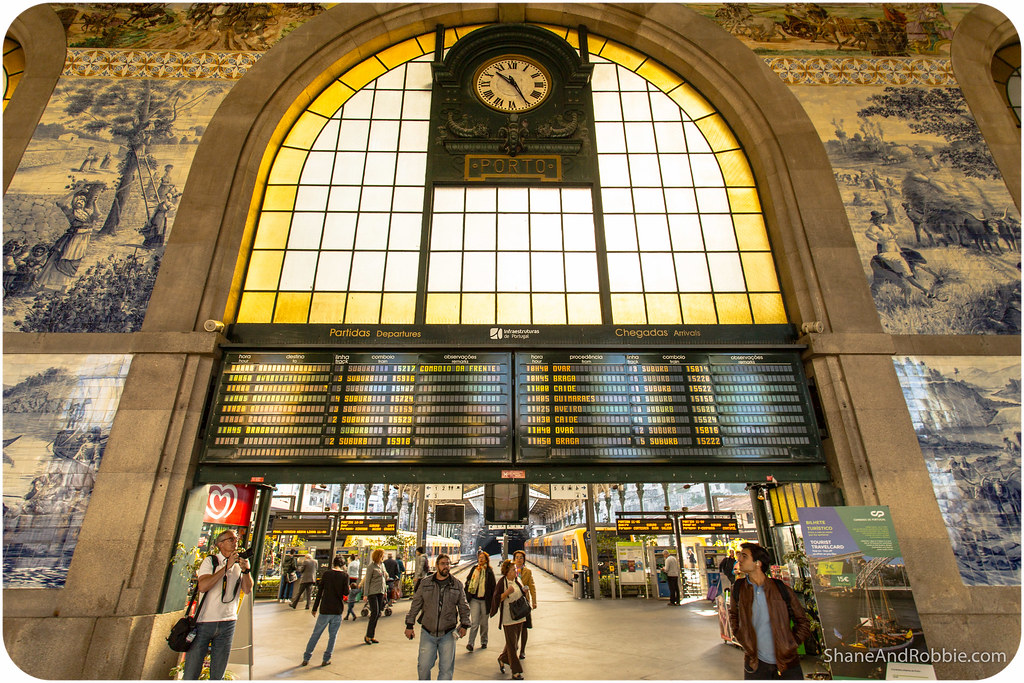 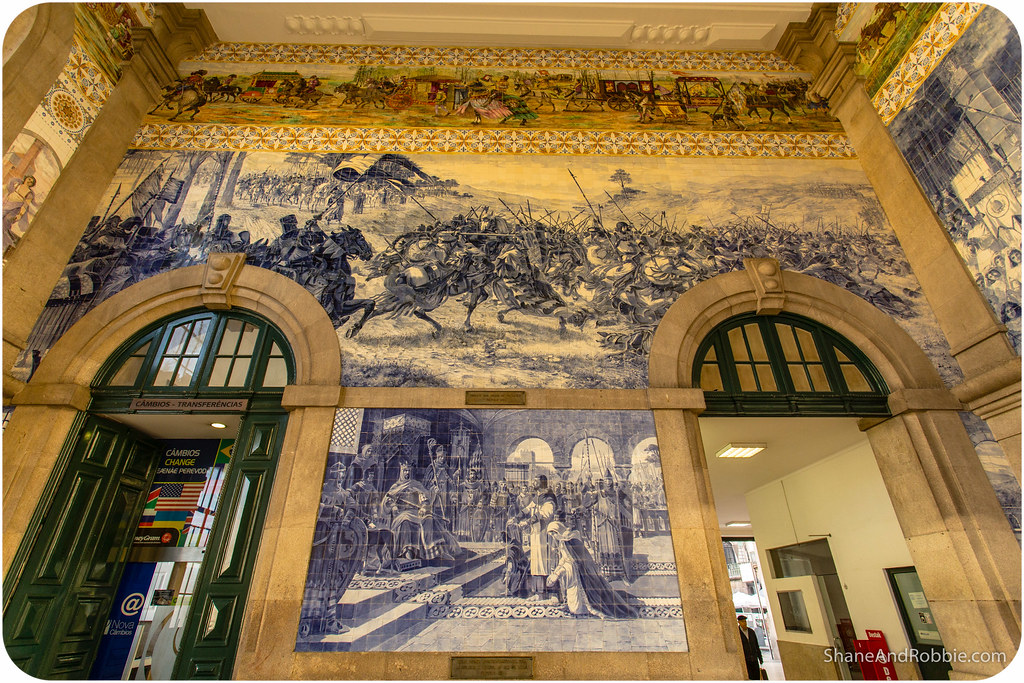 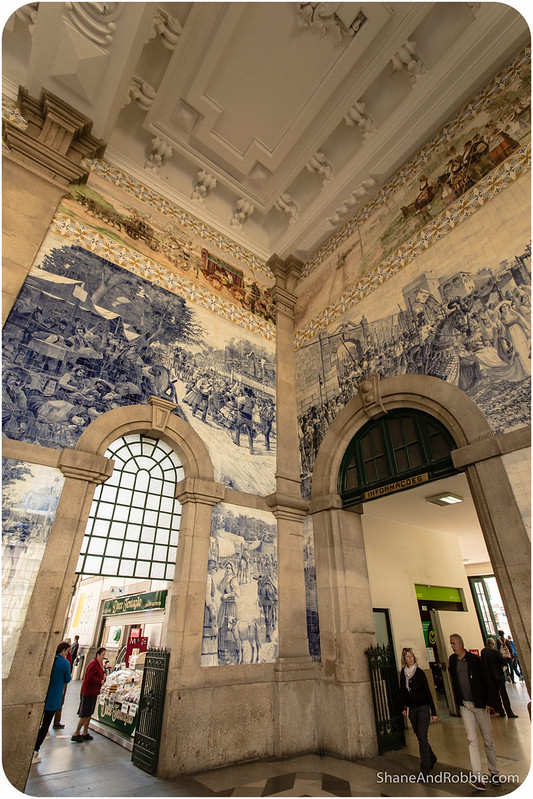 Our seat reservations made, we made our way to Avenida dos Aliados, a grand boulevarde generally regarded as the city centre. Dominated by the town hall (Camara Municipal), the avenue is flanked by ornate Neo-Classical buildings that remind us a little of Paris. 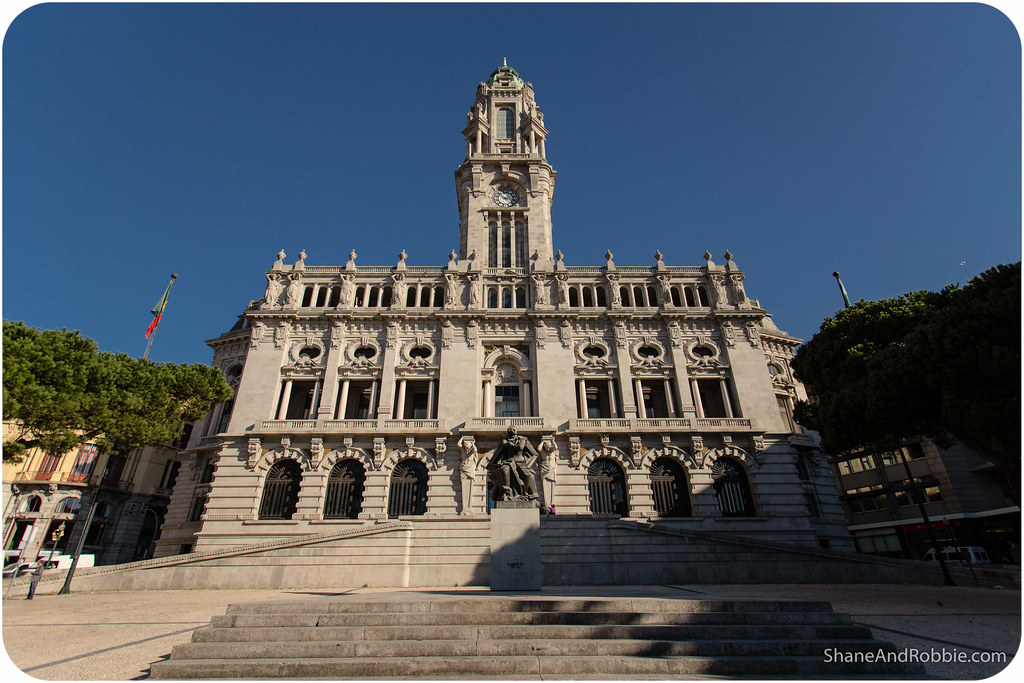 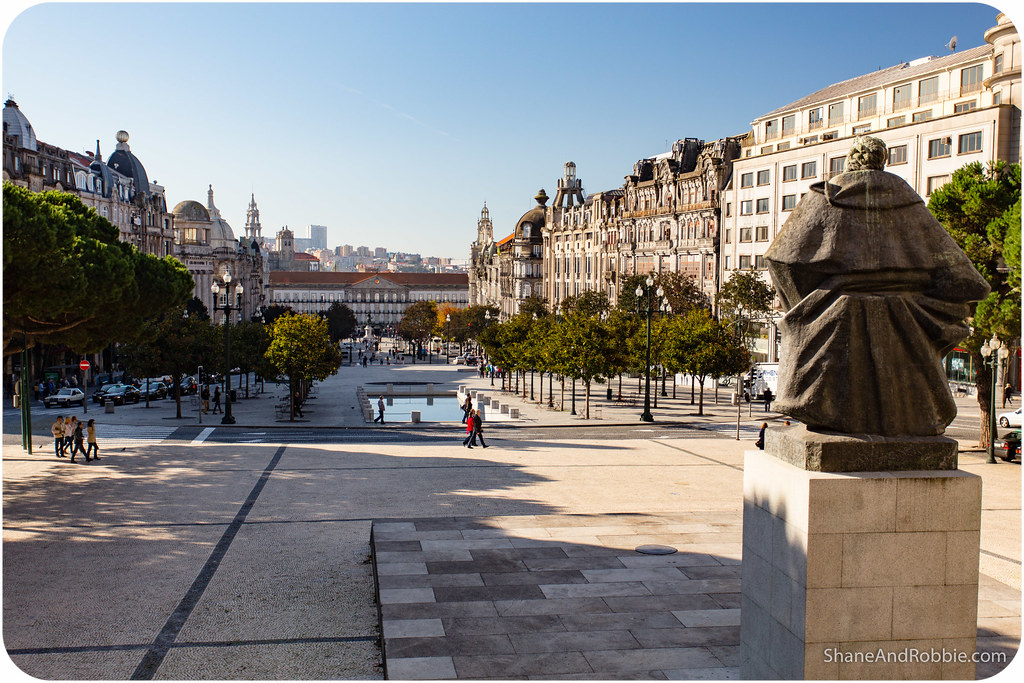 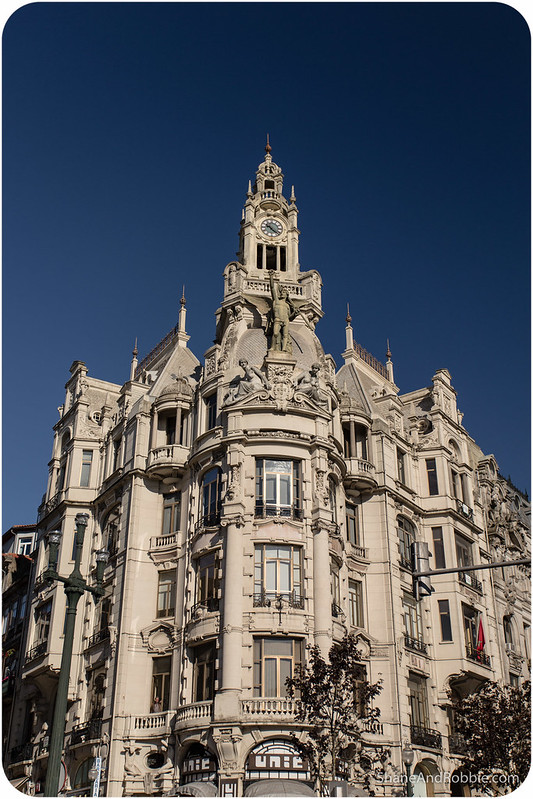 At the end of the avenue we stopped in Praca da Liberdade (Freedom Square) to admire the statue of King Dom Pedro IV, Portugal’s last king before continuing on towards Igreja dos Clérigos (Church of the Clerics).

The Clérigos Church is a Baroque was built by Nicolau Nasoni, an Italian architect and painter who did an extensive amount of work in Porto during the 18th century. Its interior was ornate and beautiful, though it wasn’t the church itself we were most interested in. 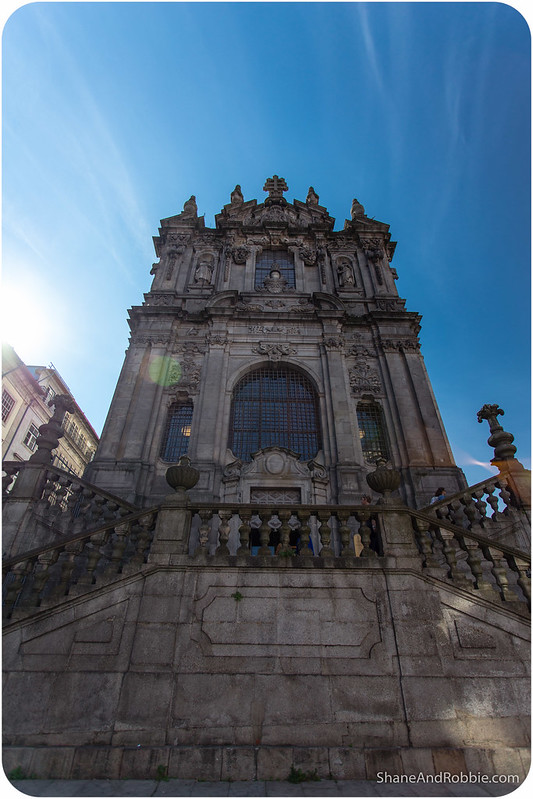 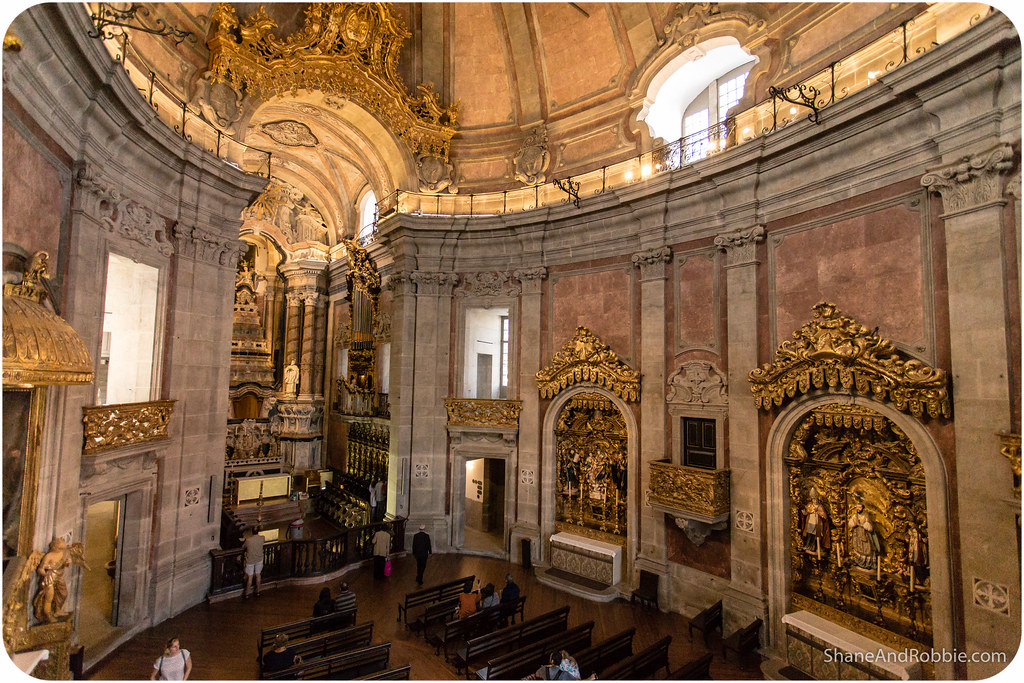 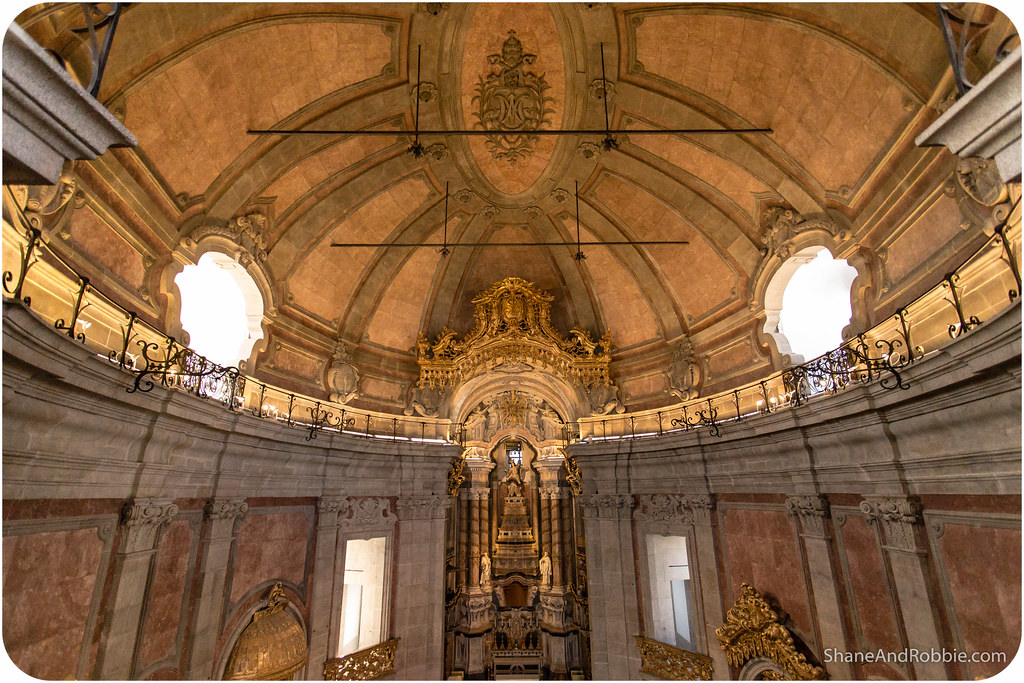 Our primary reason for visiting Igreja dos Clérigos today was to climb its iconic clock tower, which affords fantastic views over the whole of Porto. From up there we could see all the way West to the Atlantic Ocean, and across the old town to the River Duoro. Seeing the city laid out around us made us keen to see more of it tomorrow! 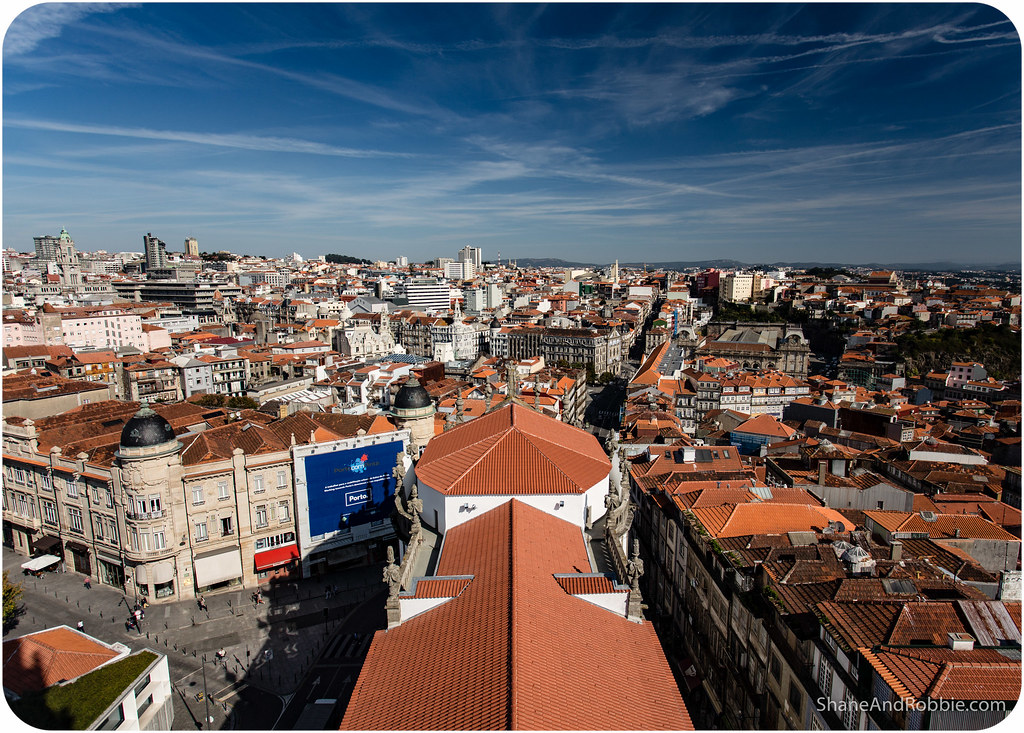 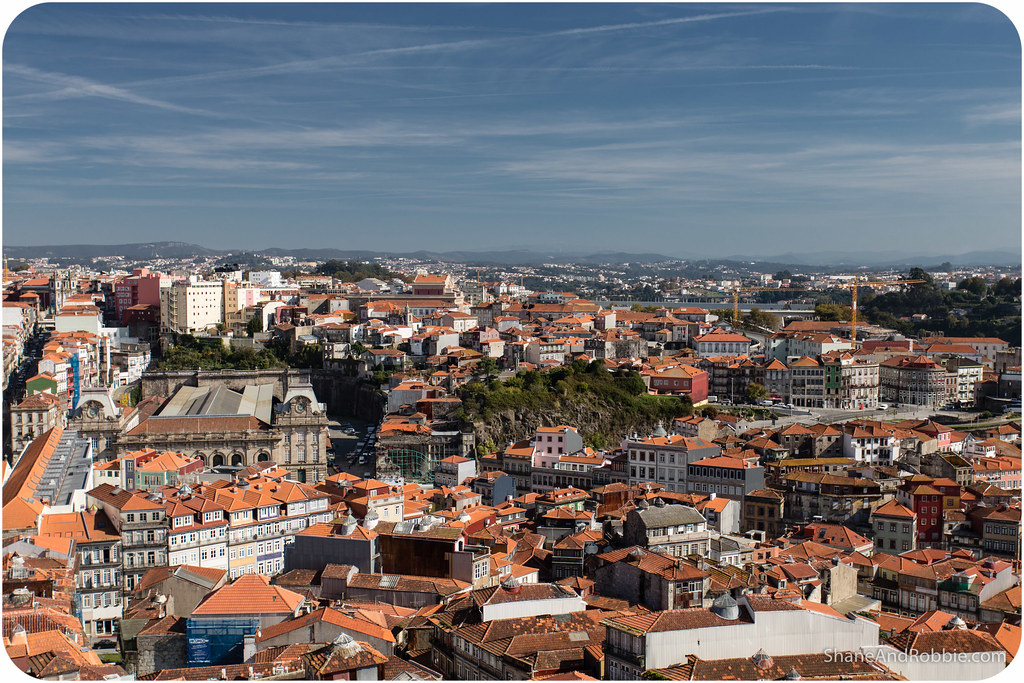 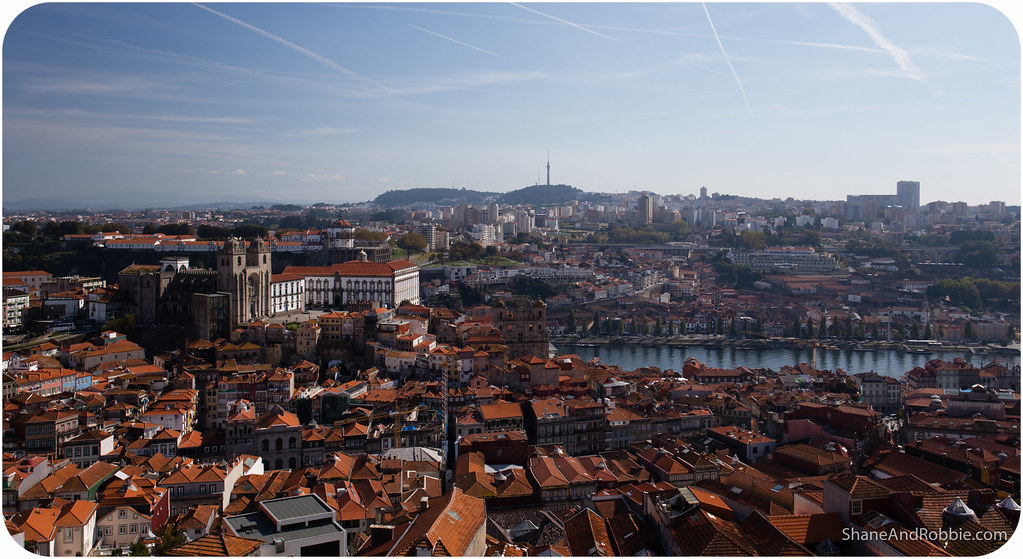 Changing countries always requires a little adjustment, and the transition from Spain to Portugal has been no different. The language is different, and the cultural norms are similar but certainly not the same as in Spain. Exploring the differences between cultures is a big part of the fun for us though, so we’re really looking forward to the next couple of weeks here in Portugal (don’t be fooled by Shane’s daft expression)! 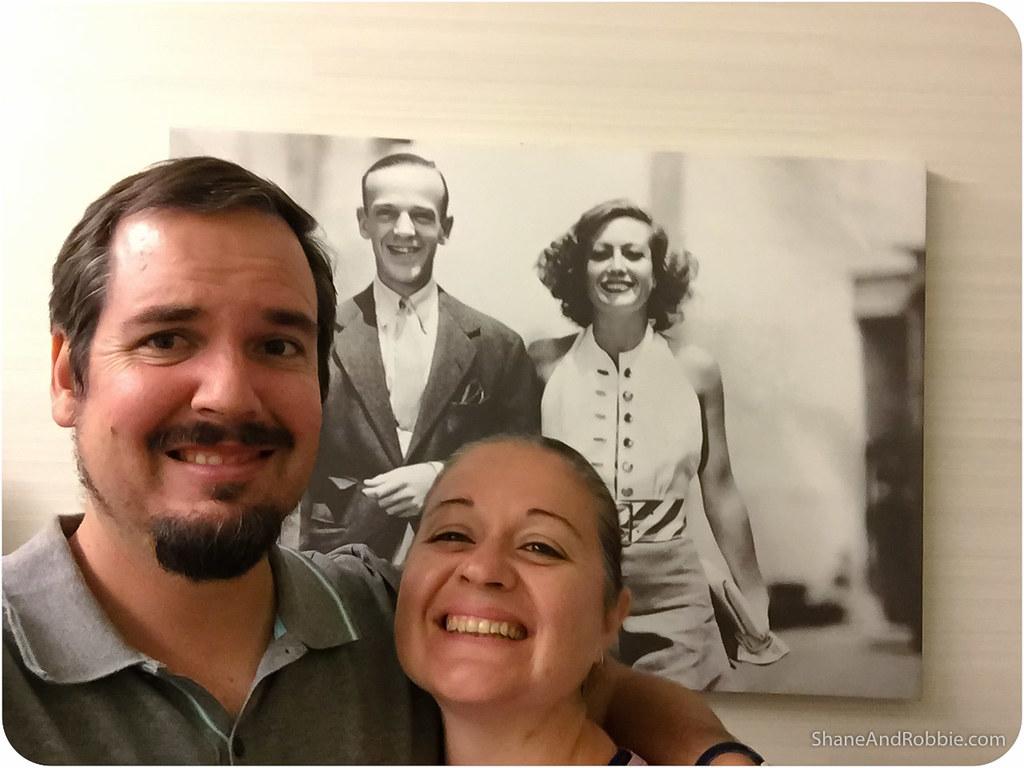