Today was our final day in Porto and we chose to spend it relaxing and appreciating some of the smaller details around town. We saw enough of the grand sights on Thursday and were happy to just spend today wandering through the Baixa and La Ribeira again, this time focussing on the beauty hidden behind corners and up the less touristy, narrow laneways. First stop for the day, however, was the Mercado de Bolhao, Porto’s central marketplace. 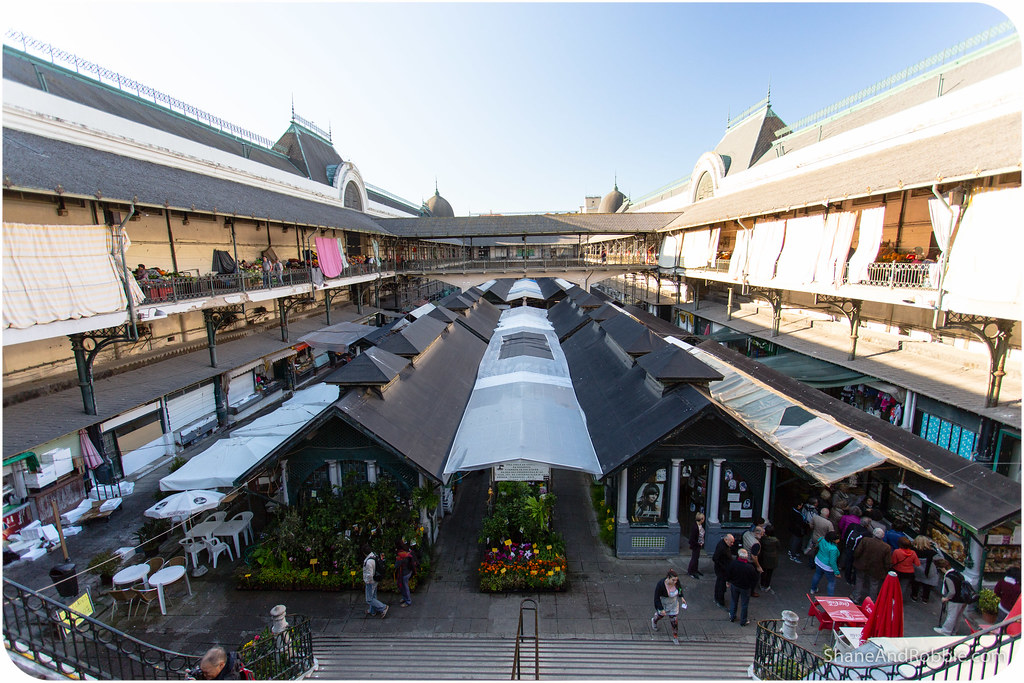 The Mercado de Bolhao is a traditional produce market where locals come to buy their fruits, vegetables, bread, fish, and meat. The market is open every day except Sunday, with Saturday being the busiest day. Things were just kicking off when we got there at 7:00 this morning, with many of the stall holders still setting out their wares for the day, and the fishmongers still busy gutting and filleting the day’s catch*.

*Seafood is a mainstay of the Portuguese diet, with fresh sardines, octopus, and shellfish on every menu. Bacalao, or salted cod, is also a traditional favourite around here. 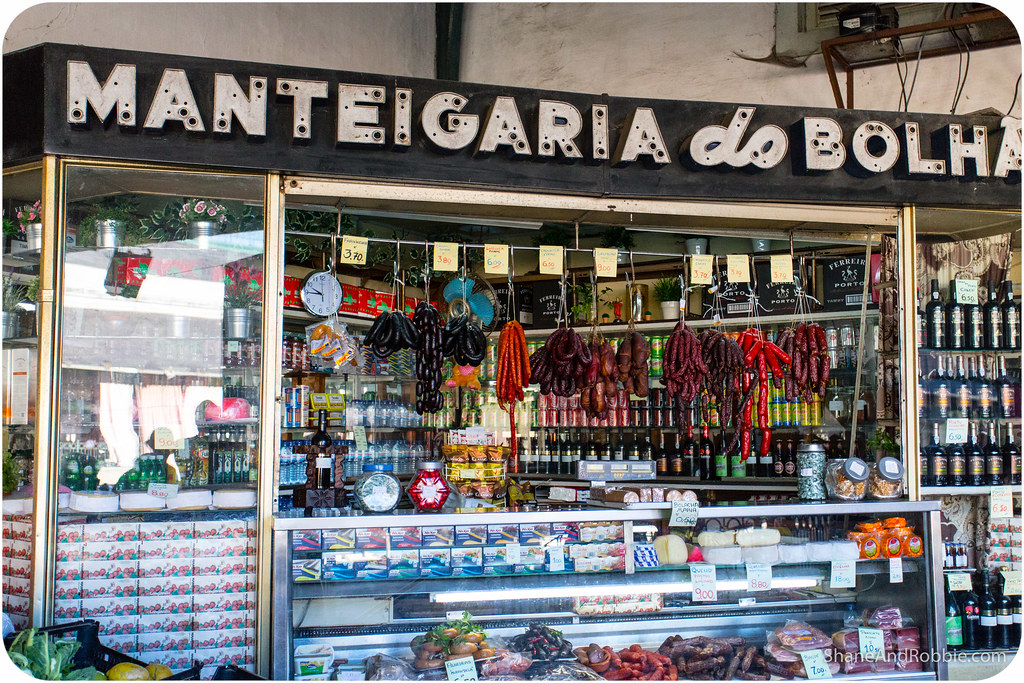 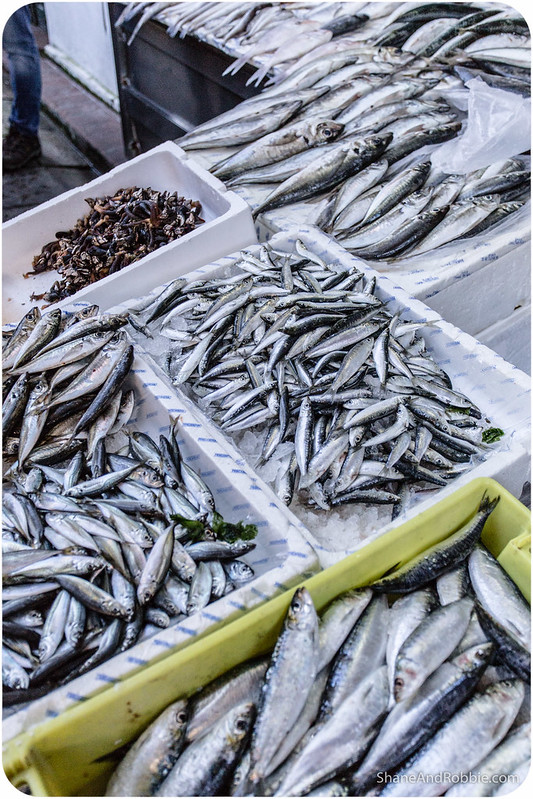 There were bunches of chillies and plaits of garlic hanging up, aged and ready for use; and so many varieties of vegetables and fruits we’d never seen before. It was all so colourful and fresh! And man were the prices cheap – we had heard that food in Portugal was in expensive, but it has really surprised us how little basic foodstuffs cost. 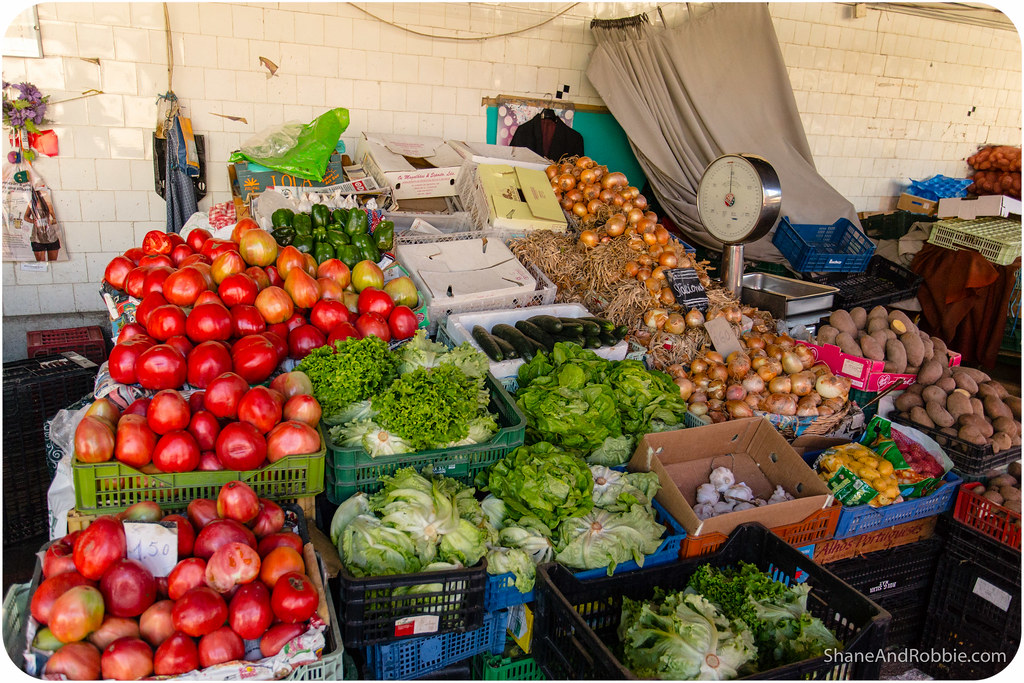 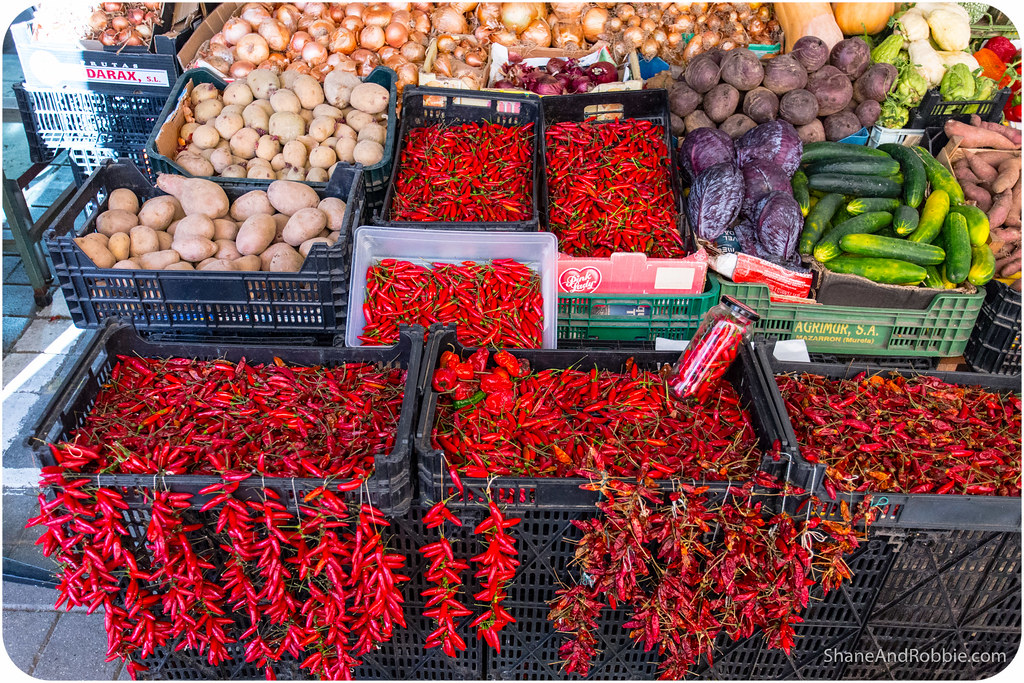 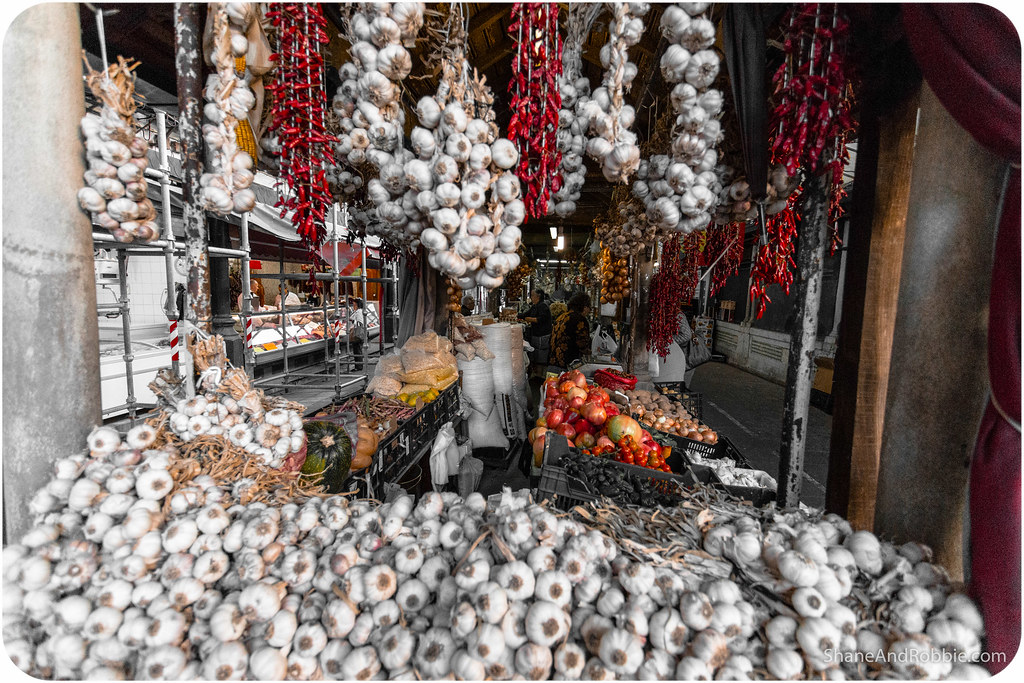 Today, for example, we bought a whole lot of fresh salad vegetables, bread, and cheese from the market for lunch and spent a grand total of €3.75! Not bad for a picnic lunch fresh from the farm. We’ve had friends in Aus talk about retiring to Portugal and given how friendly people are, how relaxed the pace of life is, how cheap houses are, and how inexpensive the food is here, we can see how it might be tempting. 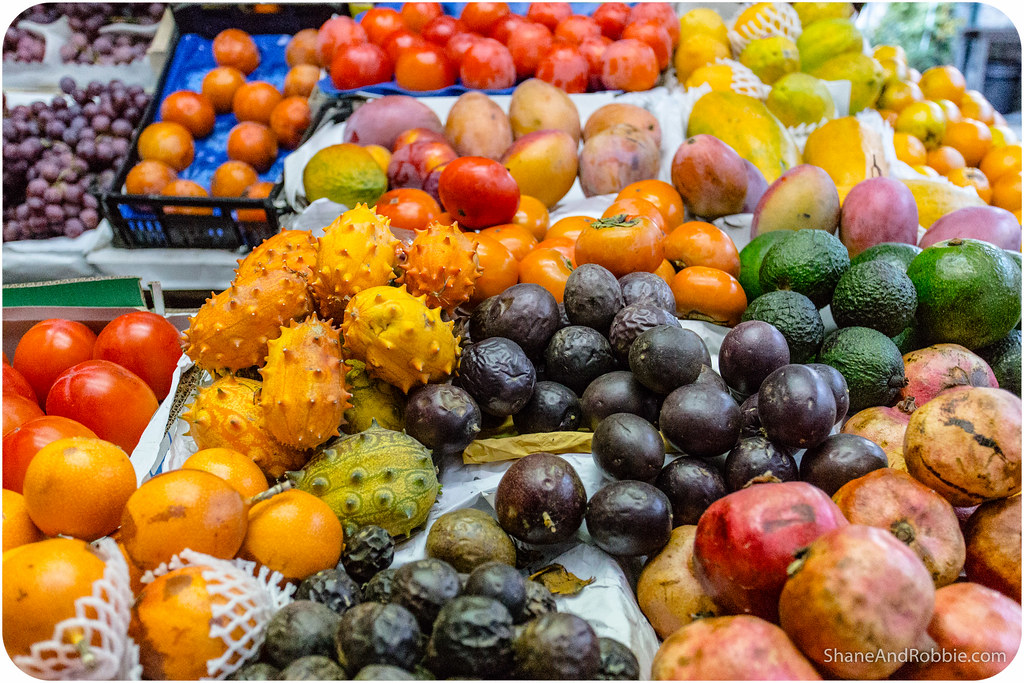 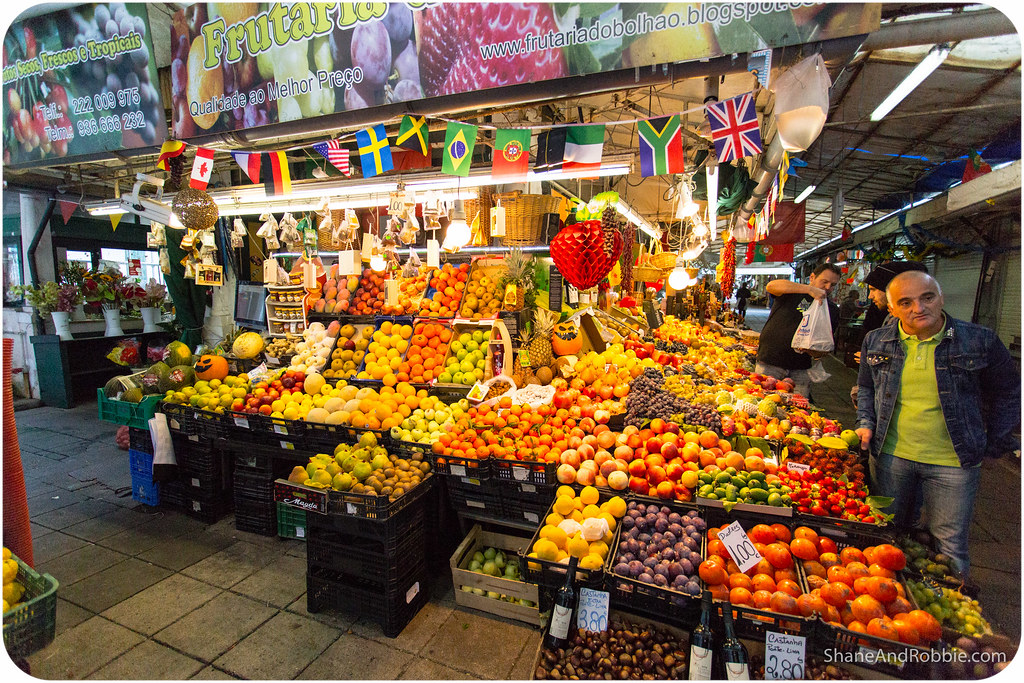 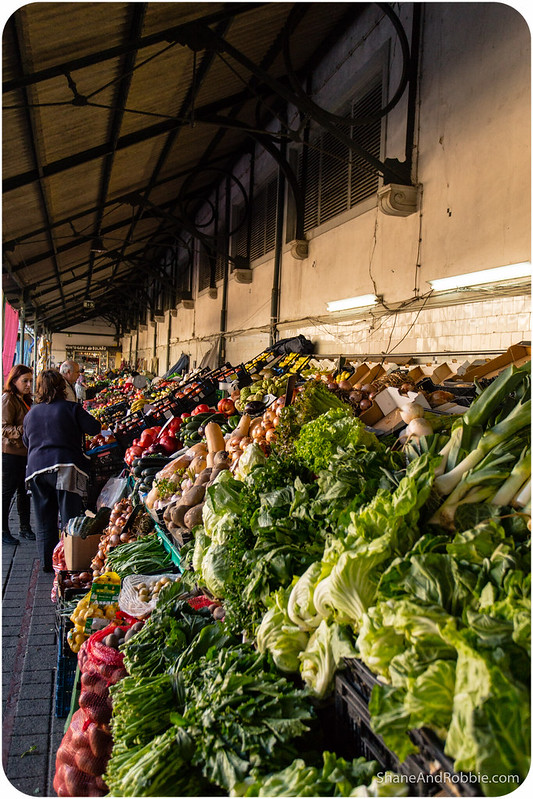 The issue of housing in Portugal is interesting; we’ve seen heaps of “For Sale” signs on houses around central Porto over the last few days so we asked a couple of locals about it and it turns out there’s an epidemic of empty houses waiting to be sold here. We saw dozens of empty houses all around the Baixa and La Ribeira, boarded up and awaiting a buyer. Apparently some of these have been for sale for a year or more, with the owners having moved away, often to another country, in search of work*.

*Since the GFC the Portuguese economy has been in in dire straits, with some pretty severe austerity measures in place (e.g. their goods and services tax rate here in 23% on non-essential items). Unlike Spain, however, where people are reticent to leave their home towns and consequently youth unemployment rates have sky-rocketed to 50% or more, the Portuguese have responded with mass emigration out of the country in their search for work. 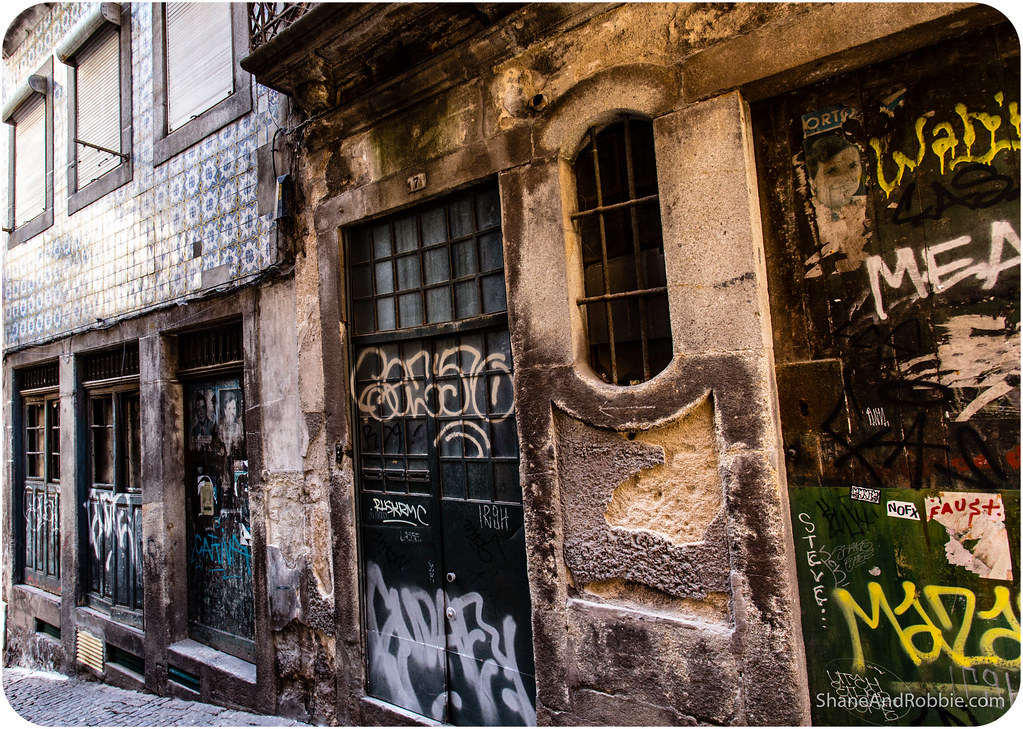 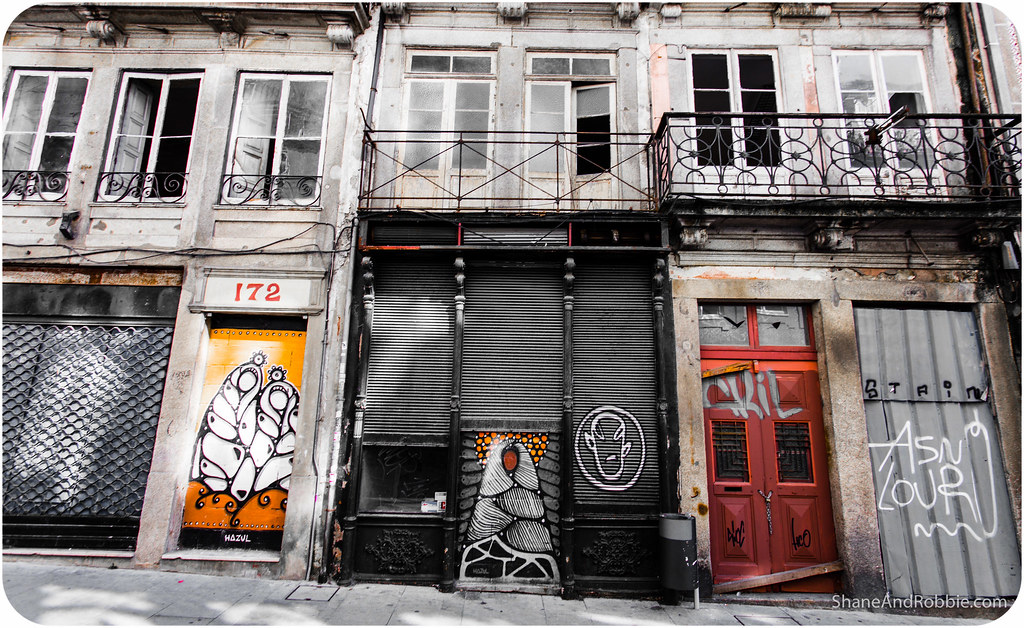 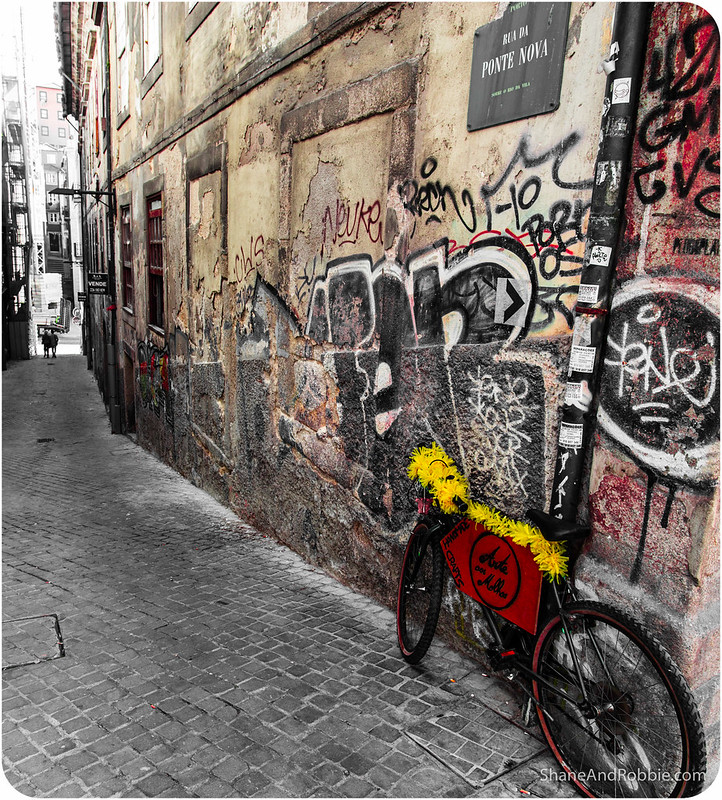 Most home vendors are hoping for a foreign buyer to come and snap up their place, or for a hotel chain to invest in the area and turn a number of old places into tourist accommodation. In the meantime, many of the old homes in the Baixa and La Ribeira stand empty, providing street artists with innumerable canvases on which to paint their colourful, clever designs. 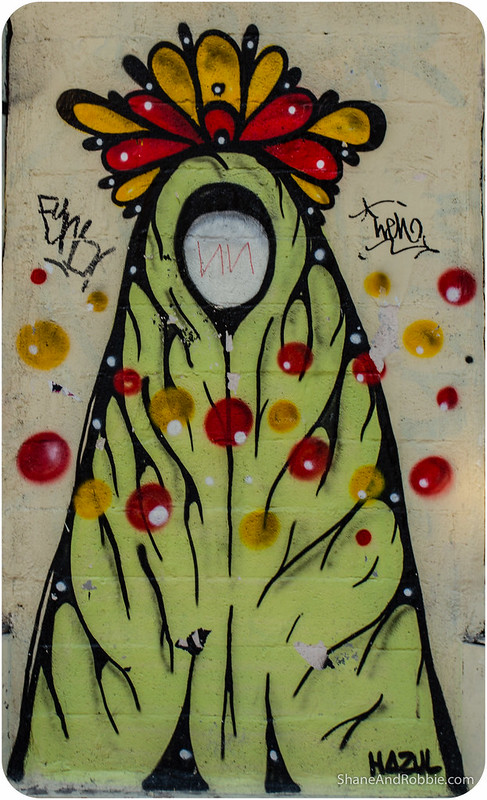 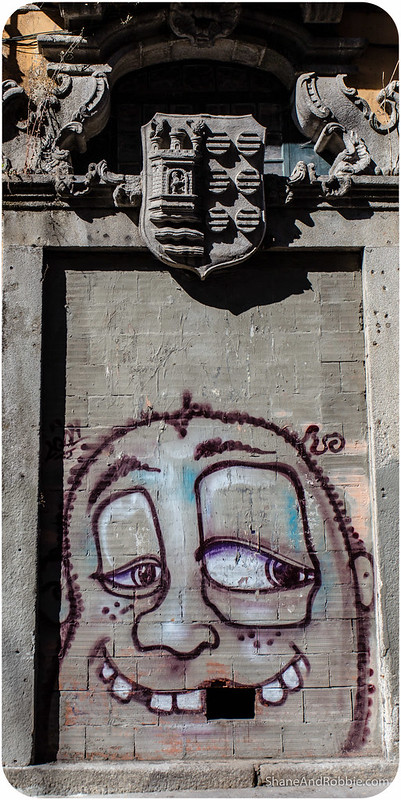 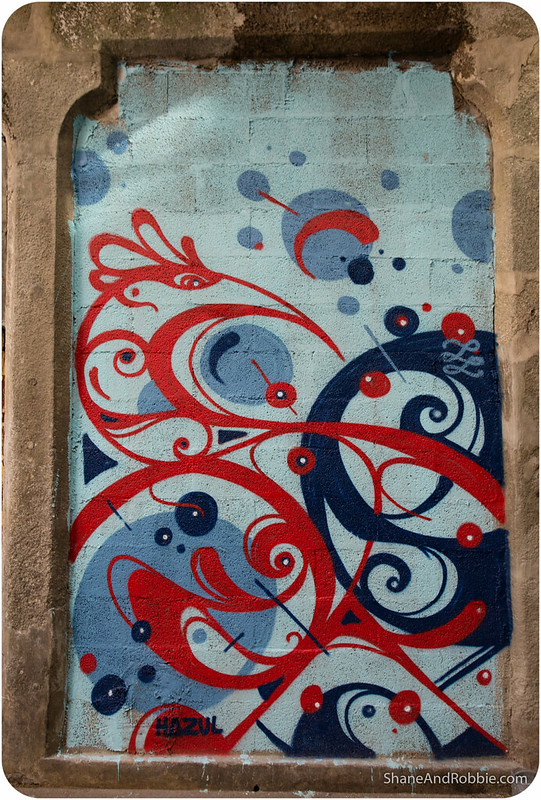 Travelling around the world we’ve learned to appreciate the talent of street artists and to seek out this colourful form of urban vandalism. Good street art can provide insights into the political and social issues currently affecting a place – like a window into a town’s zeitgeist. Plus it’s often very pretty. 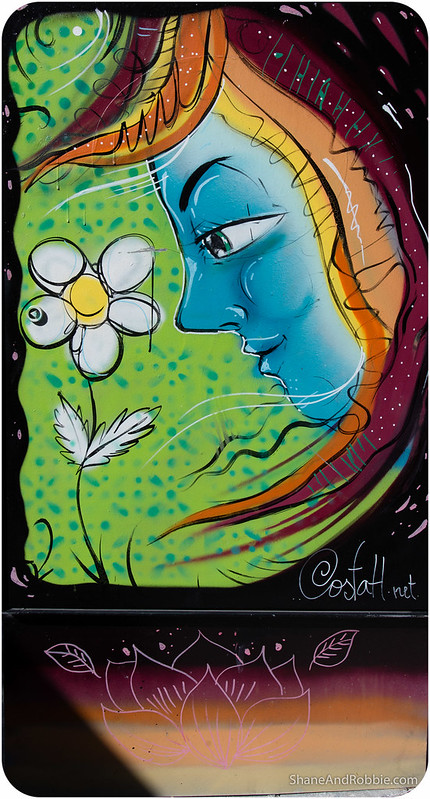 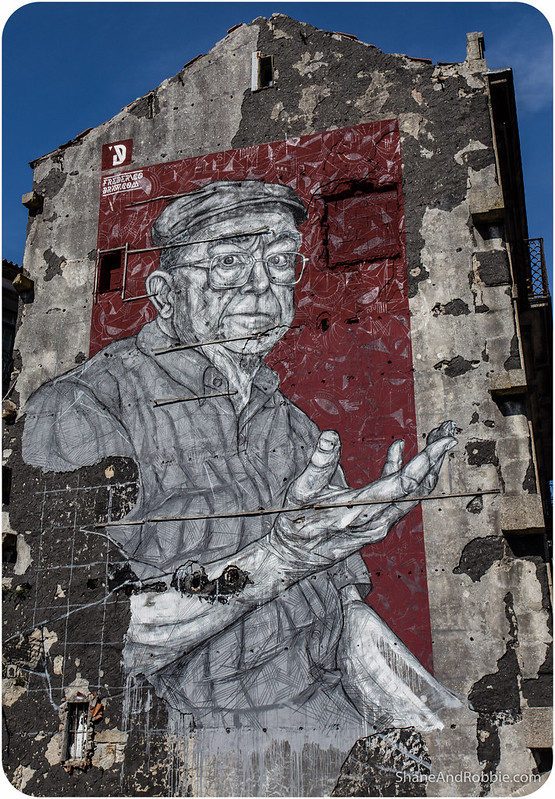 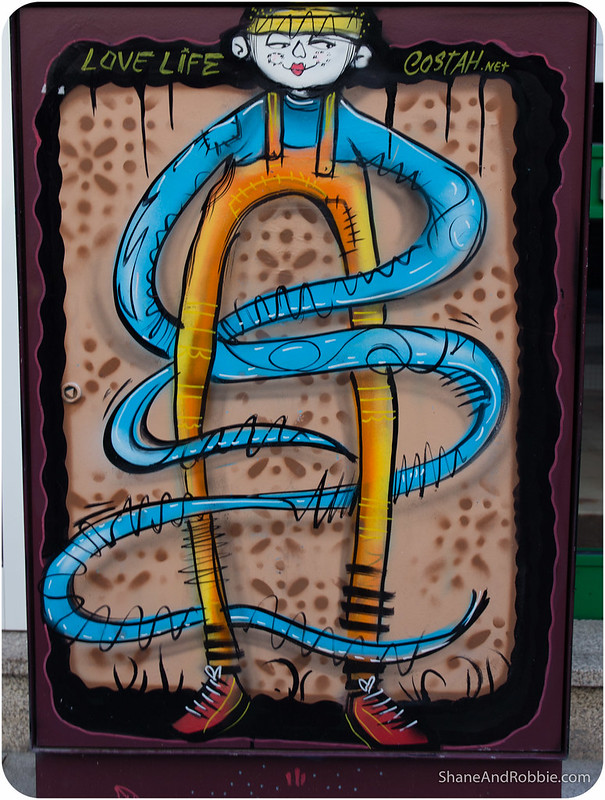 Another reason there many houses for sale in the city, we were told, is that a growing number of people are seeking to go back to the countryside and move away from the expenses of modern city living. Land here is cheap, especially in rural areas, and it makes sense that people with a little bit of money saved up might choose to turn their noses up at the entire modern, capitalist way of existing and live a simpler life. Apparently just a few thousand Euros can see people set themselves up on a plot of land where they can grow most of their own food and adopt a more (financially) sustainable lifestyle. Wonder how “rustic” that life would really be though… Bet there ain’t no internet out there in rural Portugal! Still, it’s not a bad way to deal with the financial situation really. 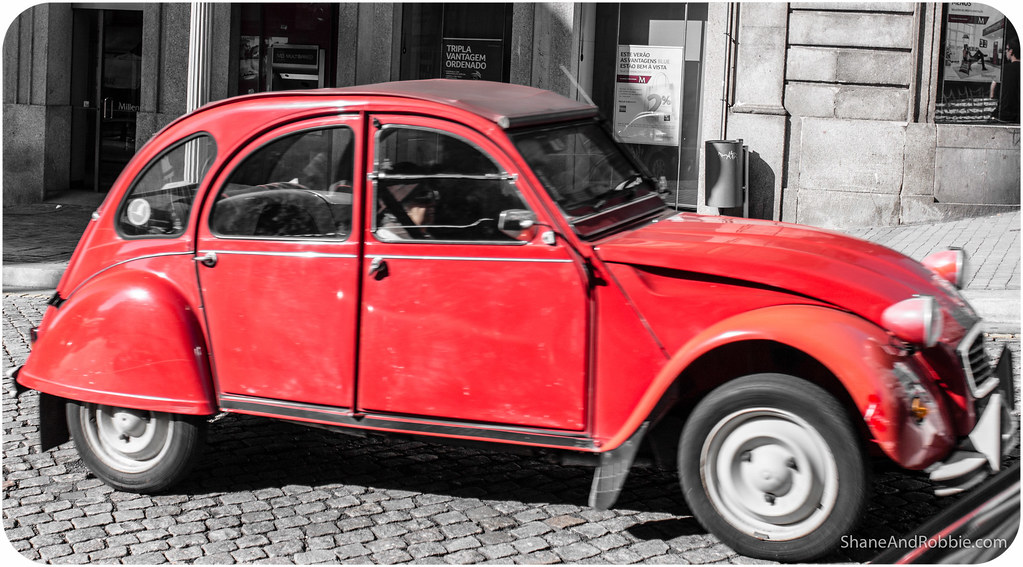 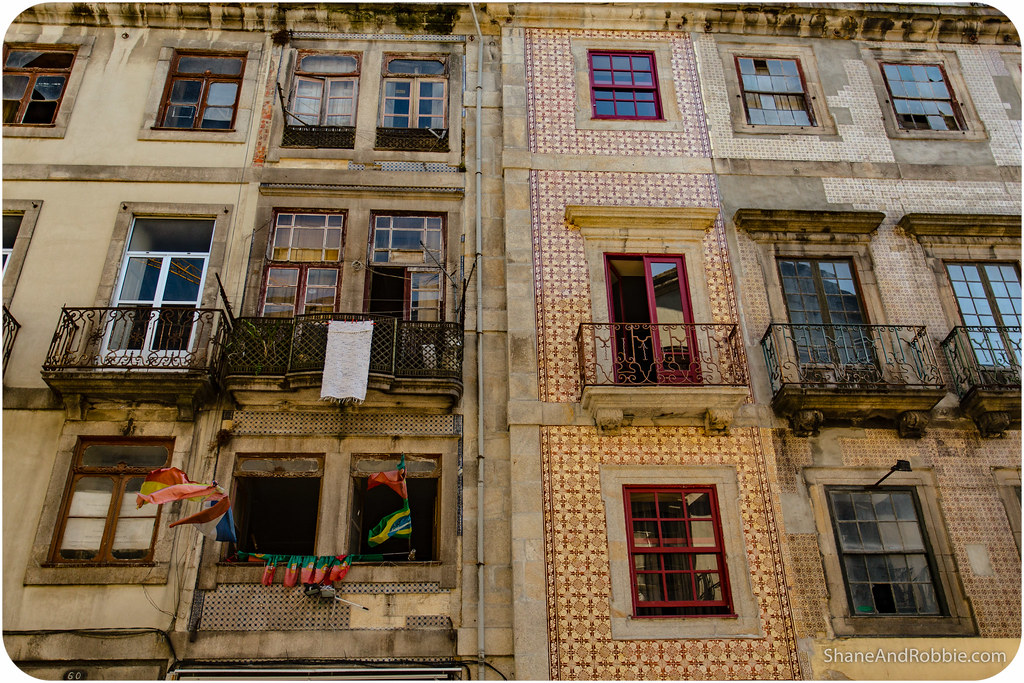 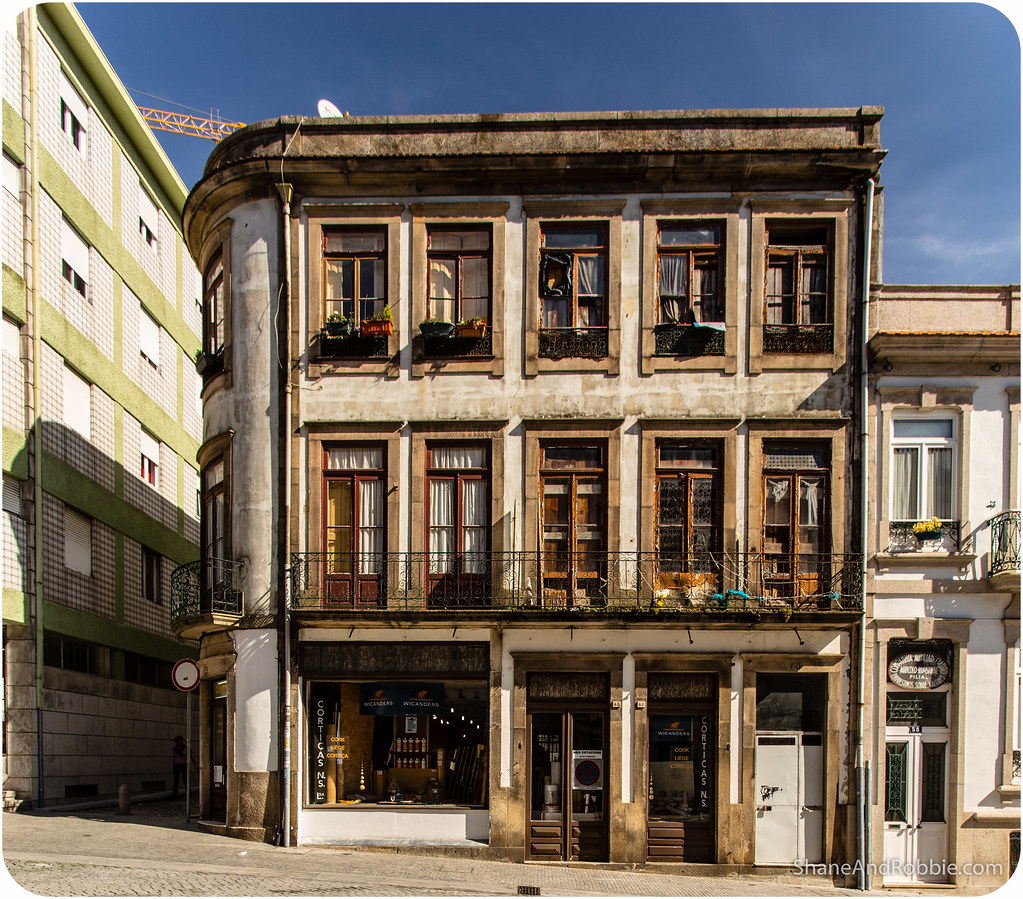 We also learned today why this city is sometimes called “Oporto”: turns out this was what the English, when they first started trading with the Portuguese centuries ago and heard the town referred to as “o Porto”, they thought that was the name of the city. The truth is that “o” is just Portuguese for “the” (when discussing a masculine noun – i.e. The port = o Porto), and it’s just “Porto” (which is actually a rather unimaginative name for a port city, but there you have it). 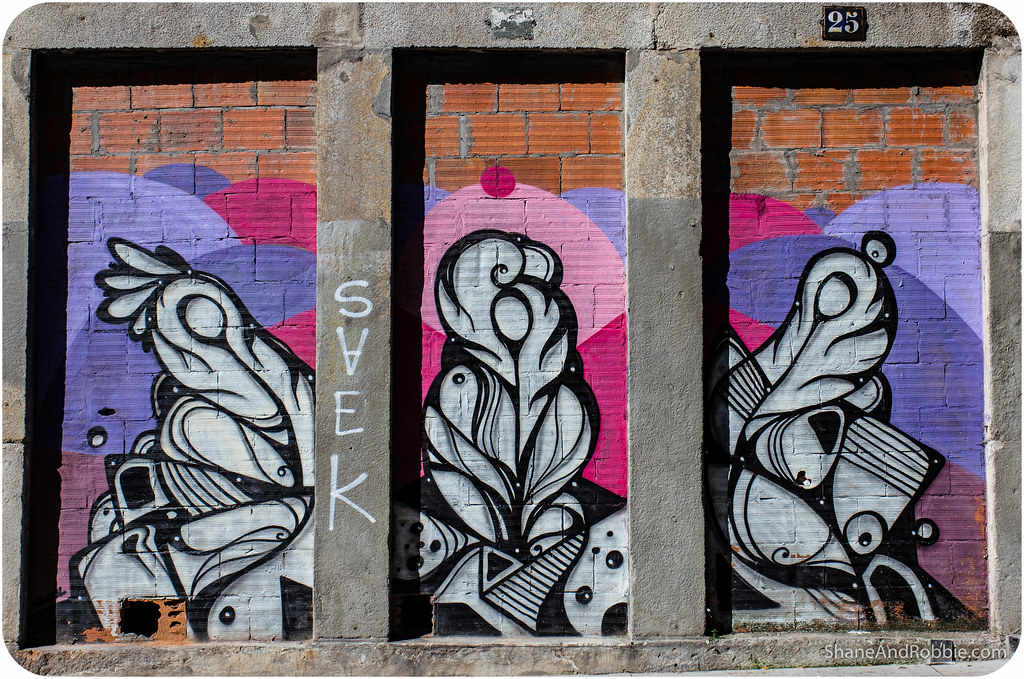 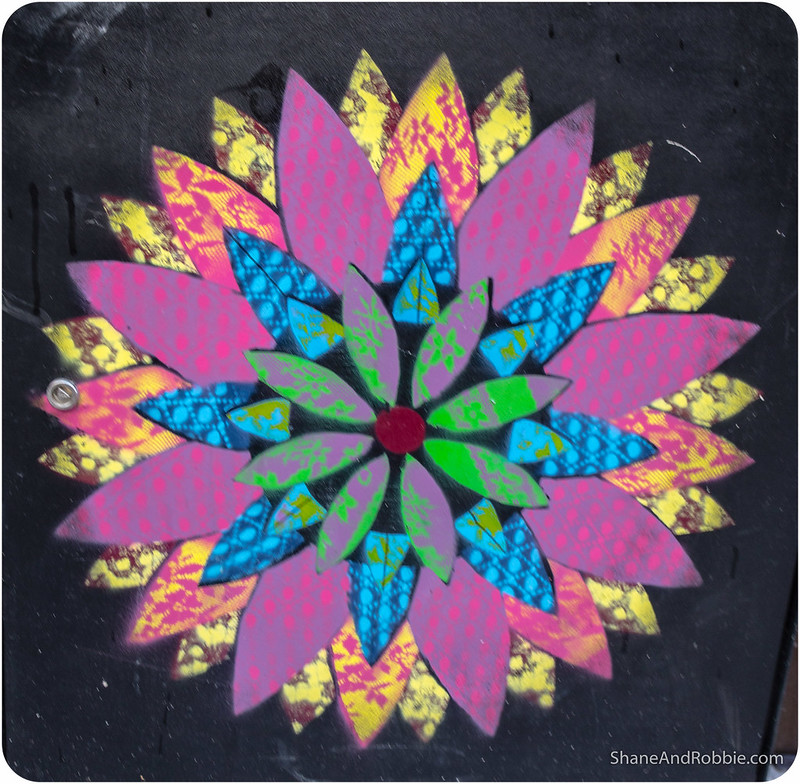 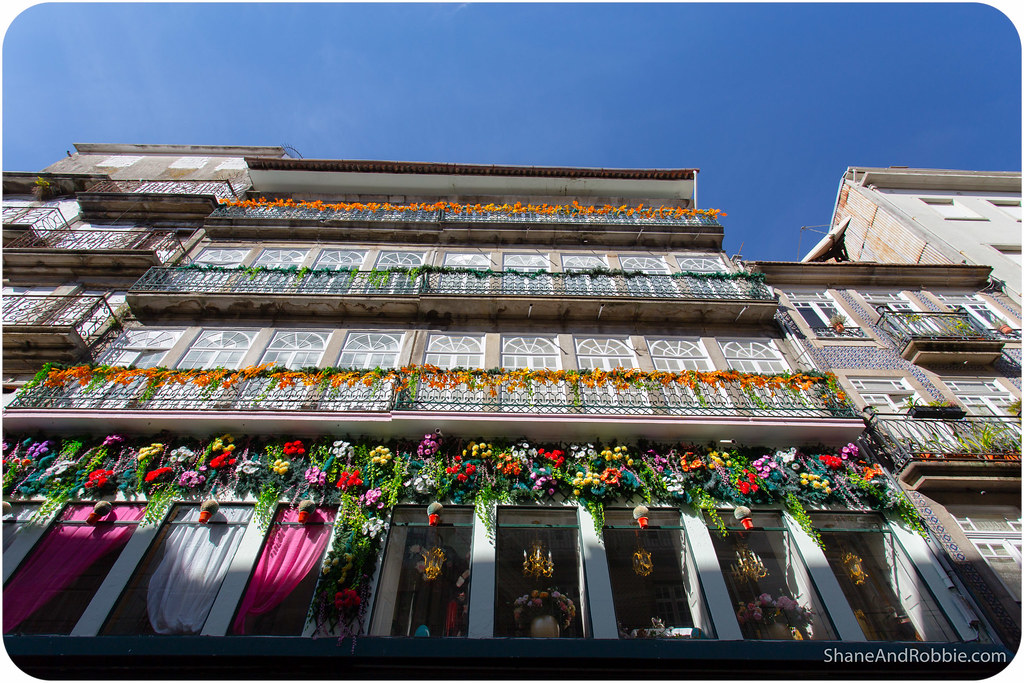 And so ends our final day here in the North of Portugal. Tomorrow we’re catching a train to Coimbra, home to one of the oldest universities in Europe. Porto has been a great place to stop for a few days and adjust to being in a new country. It’s a lovely town, with a charm and character that we quickly fell in love with. It’s also a place we would love to come back to, so we can linger along the banks of the Douro and listen to the water lapping against the banks, whilst enjoying some of the port this town is famous for. 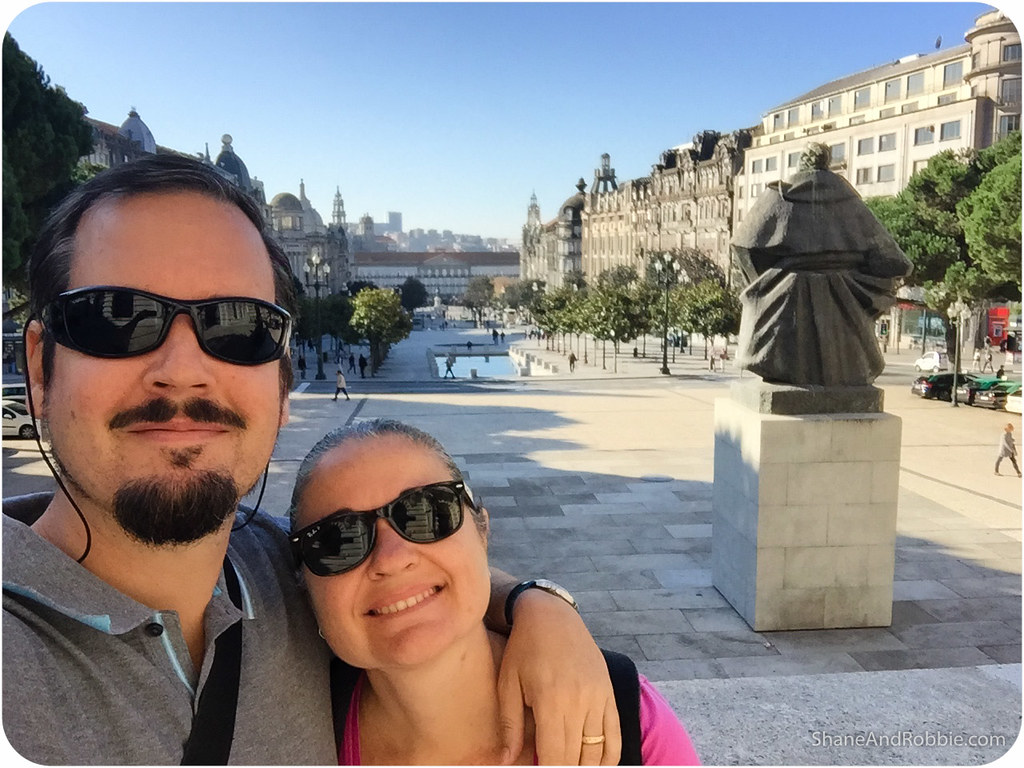