Our all-too-brief and thoroughly enjoyable stay in Portugal ended today with an early morning flight from Lisbon to Seville (Andalusia, Spain). And whilst we were sad to say goodbye to Portugal and all it has to offer, there’s still so much we want to see in Spain! We started our sightseeing around Seville today with an afternoon visit to the largest Gothic cathedral in the World: the Cathedral of St Mary of Seville. If there’s one thing Spain does well, it’s grand churches, and the cathedral here in Seville is most certainly one of the grandest of them all. And this is just the start – with an ancient Moorish castle and a warren-like old town to see, Seville promises to be a great place to explore. 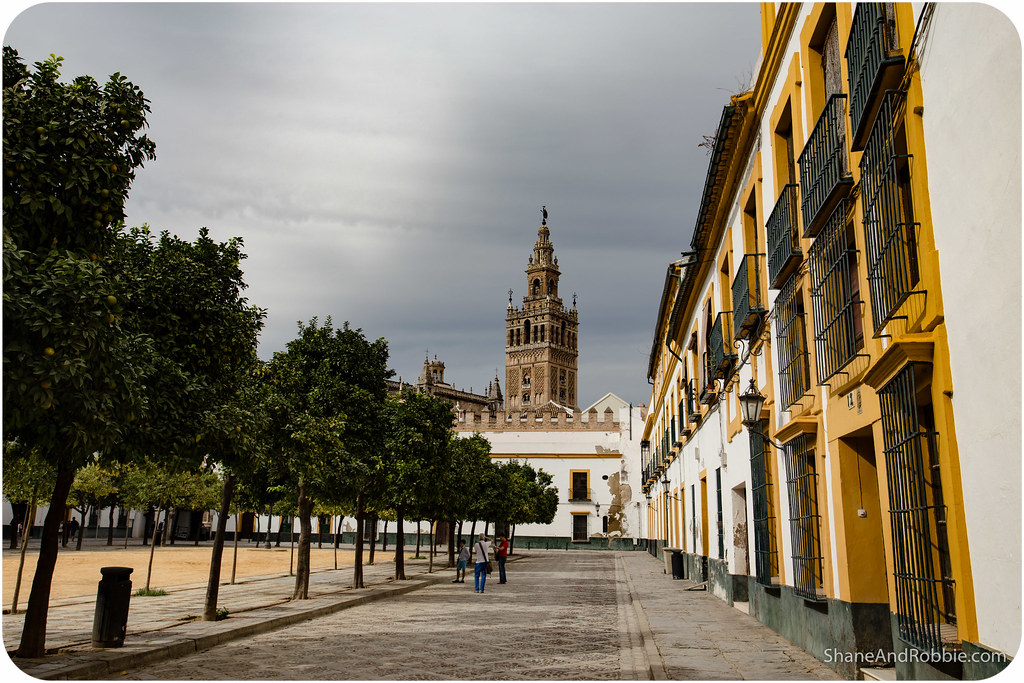 We generally don’t like to fly between destinations when travelling like this as you don’t see anything from the plane and trains or buses tend to give us more opportunity to get to know the landscape and chat to other travellers and/or locals. This time, however, flying seemed the best choice as the trains on the Spanish side of the border are still not fully operational, and the bus trip from Lisbon to Seville was going to take us a little over 8 hours. Plus we found some ridiculously cheap airfares through TAP (Portugal’s national airline), only catch: the flight left at 8:00am. Doesn’t sound too bad until you realise that means getting up at 6:00am, and that sunrise isn’t until 8:30am at the moment! Add to that trams that rattled past our guesthouse in Lisbon kept us up until 1:00am last night, and it was pretty tough getting out of bed this morning. Ah well, at least the coffee is strong in this part of the world! 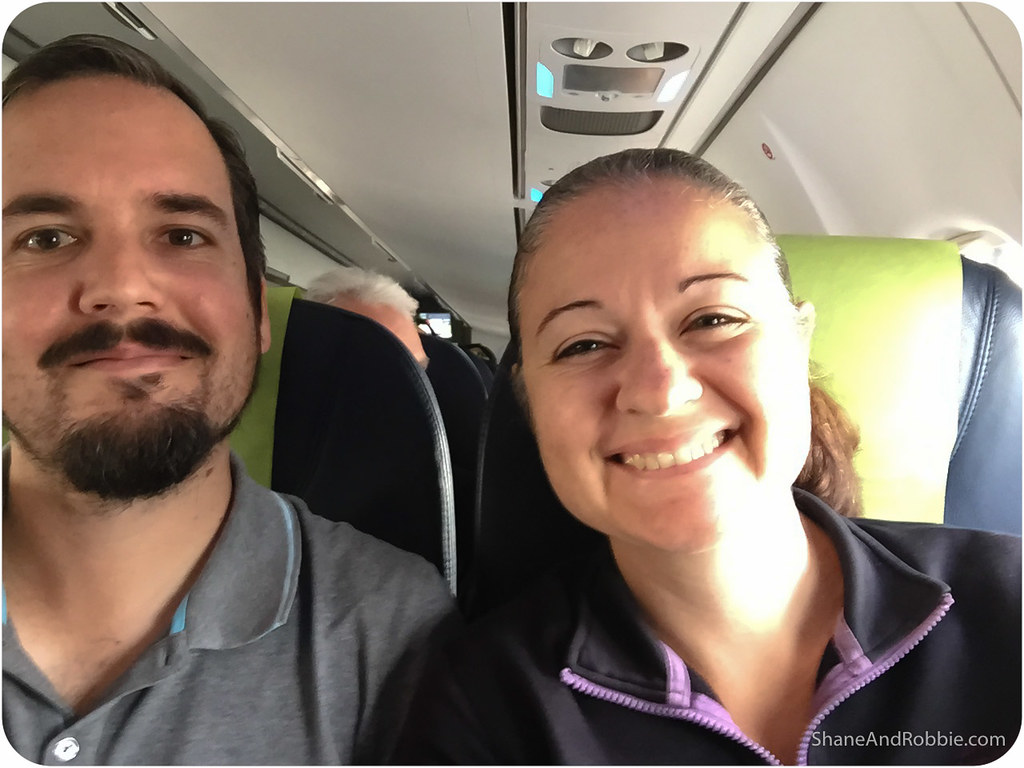 The flight itself took just an hour and took us over the mountains of Eastern Portugal and above the barren plains of Andalusia. Andalusia is the second-largest of Spain’s regions and occupies the entire South-Western part of the country. This is the hot, dry Spain that most people are familiar with from movies; where summer temperatures regularly reach 45C and afternoon siestas are a matter of necessity not habit. This is also where Spain’s Moorish past comes into its own – which is the main reason we’re in Andalusia for the next week or so. We fell in love with Moorish architecture when we visited Morocco in 2013 and are keen to see more here in Spain. 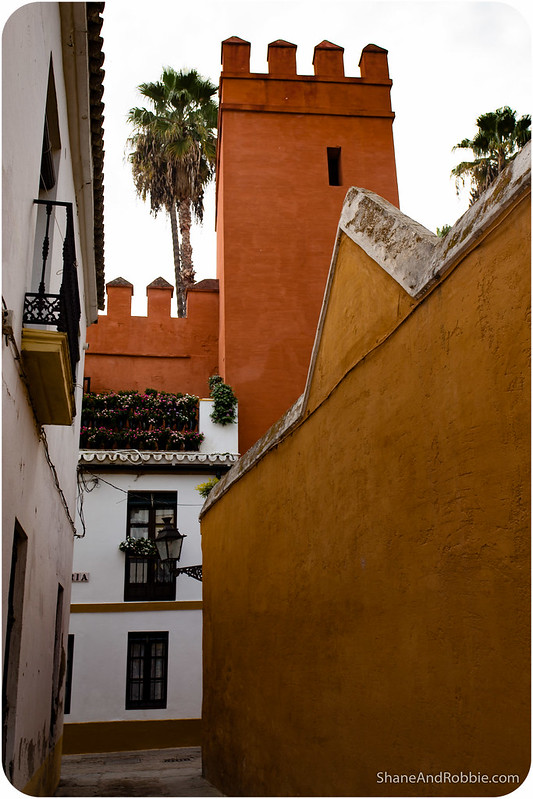 For 800 years this was the centre of the Arab empire of Al-Andalus and the legacy from that time is a rich Moorish heritage and a cultural identity that uniquely blends Arab and European influences. Andalusian culture has been hugely influential throughout Spain – many cultural phenomena that are seen internationally as distinctively Spanish are actually Andalusian in origin (e.g. flamenco, bullfighting, and the mudejar Moorish-influenced architectural style characteristic of Spain). 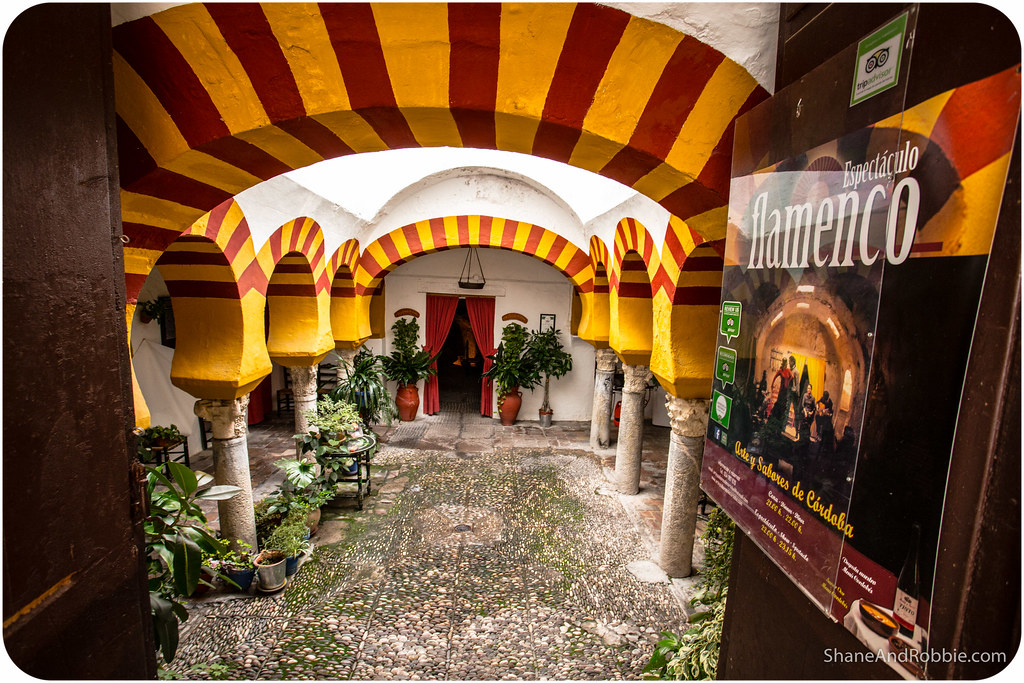 Seville is the capital of and largest city in Andalusia and has a lot of historical sites worth exploring, which is why we’re here for a couple of days. Situated on the plain of the River Guadalquivir, Seville was an important city since its founding by the Romans 2,000 years ago. At that time the river was wide and deep enough for ships to sail all the way in to Seville, making this an important trade centre and port. 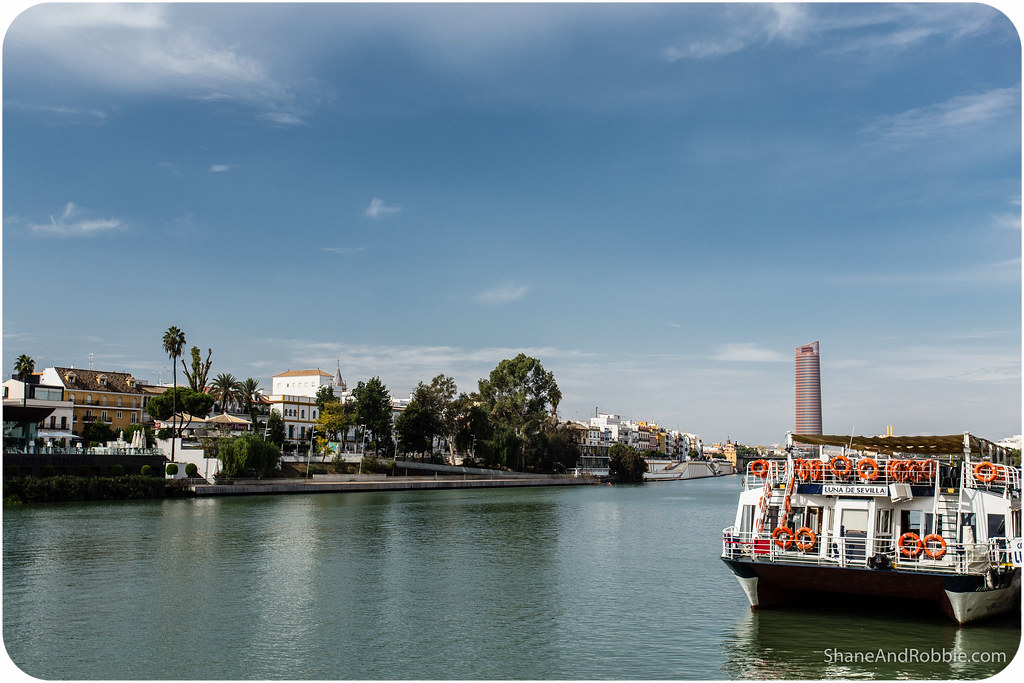 The city became known as Ishbiliya after the Muslim conquest in 712, and was ruled by the Caliphate of Córdoba until 1248 when the Spanish forces of King Ferdinand reclaimed the city. For more than 500 years the Moors ruled the city, imprinting it indelibly with their aesthetic tastes, artistic influences, and architectural style. Most of the homes in the old part of town here, for example, have homes built around central courtyards and tiled entrances very much in the style of the riads we saw in Morocco. 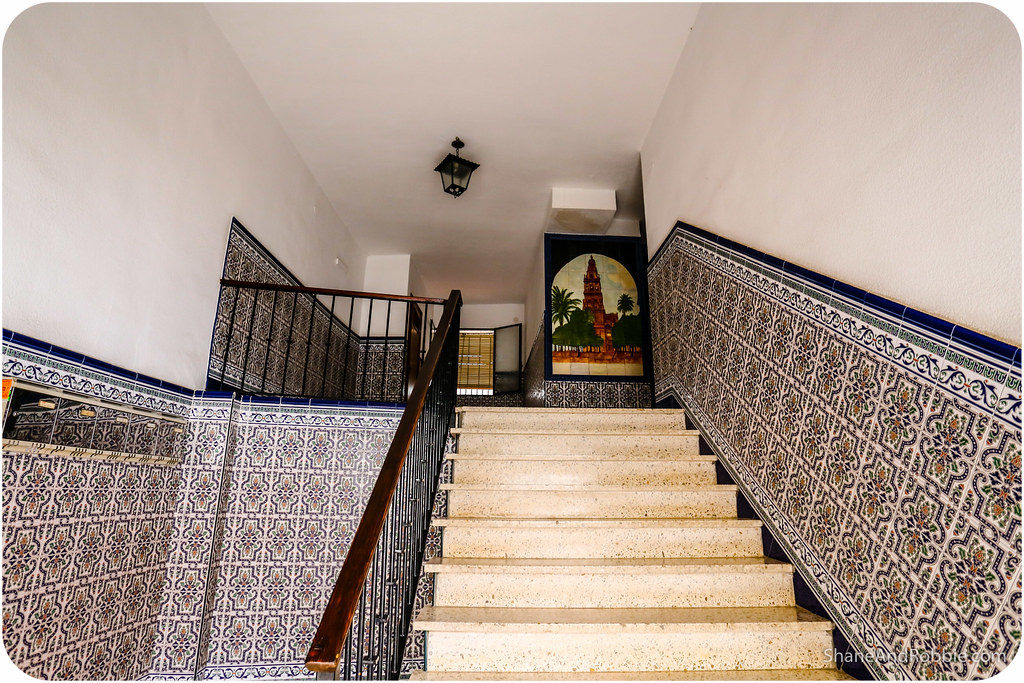 It’s not just the Moorish influences that shaped Seville’s cityscape, however. After the Reconquista and the discovery of the Americas, Seville became one of the most important economic centres of the Spanish empire as its river port monopolised the trans-oceanic trade (for hundreds of years most goods coming in from the americas went through Seville). Seville was an incredibly wealthy city, with the 17th century being the city’s greatest century. Silting up of the River Guadalquivir, however, forced the closure of Seville’s river port and ultimately led to the city’s decline. It was only tourism in the late 19th century that helped grow Seville again and back it back on the map, so to speak. 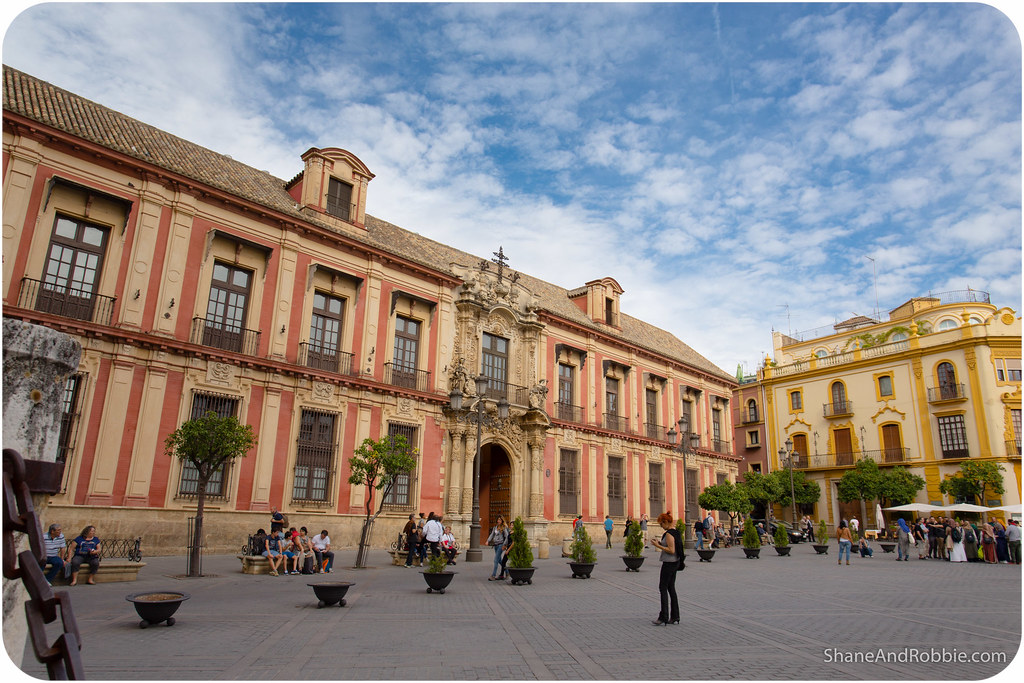 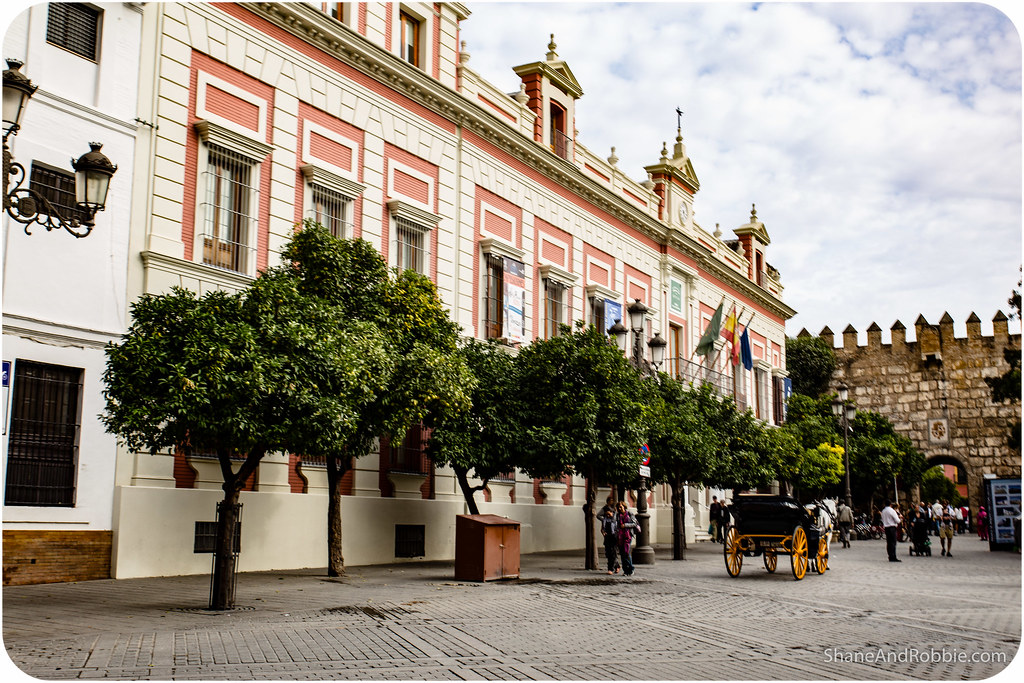 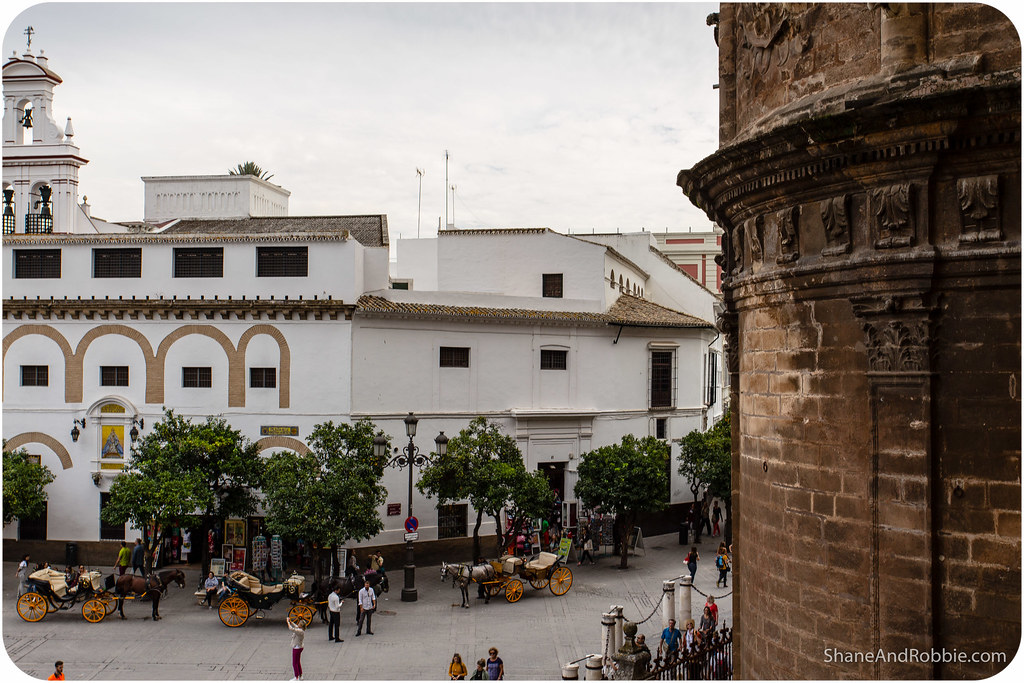 During it’s greatest years, however, Seville’s Moorish core was added to, extended and expanded to include some truly grand Baroque buildings, plazas, and boulevards. Foremost amongst these is the grandiose Cathedral of Seville. 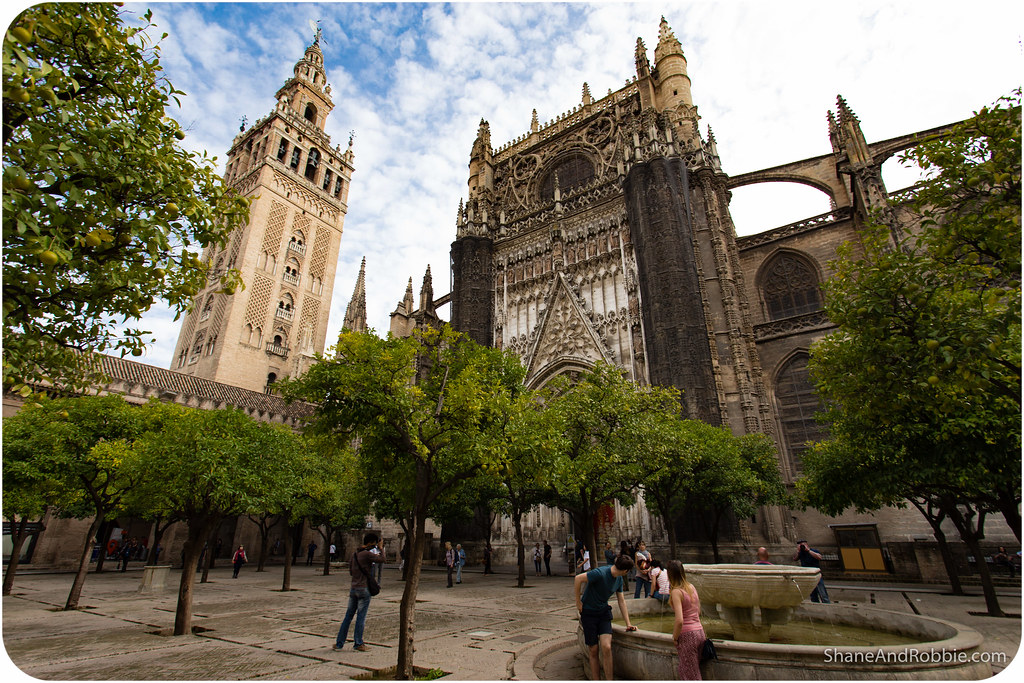 We’ve seen a lot of churches in our travels but Seville’s cathedral really does stand out as a monstrous creation. With a length of 135m and a width of 100m, it is the largest Gothic cathedral and the 3rd-largest church in the world. Apparently when the plans for the cathedral were being drawn up in 1401 the bishop gave the architects these instructions: “Let us build a church so beautiful and so grand that those who see it finished will think we are mad”. They seem to have achieved their aim!

*The 2 larger churches being the Basilica of the National Shrine of Our Lady of Aparecida and St Peter’s Basilica in Rome. 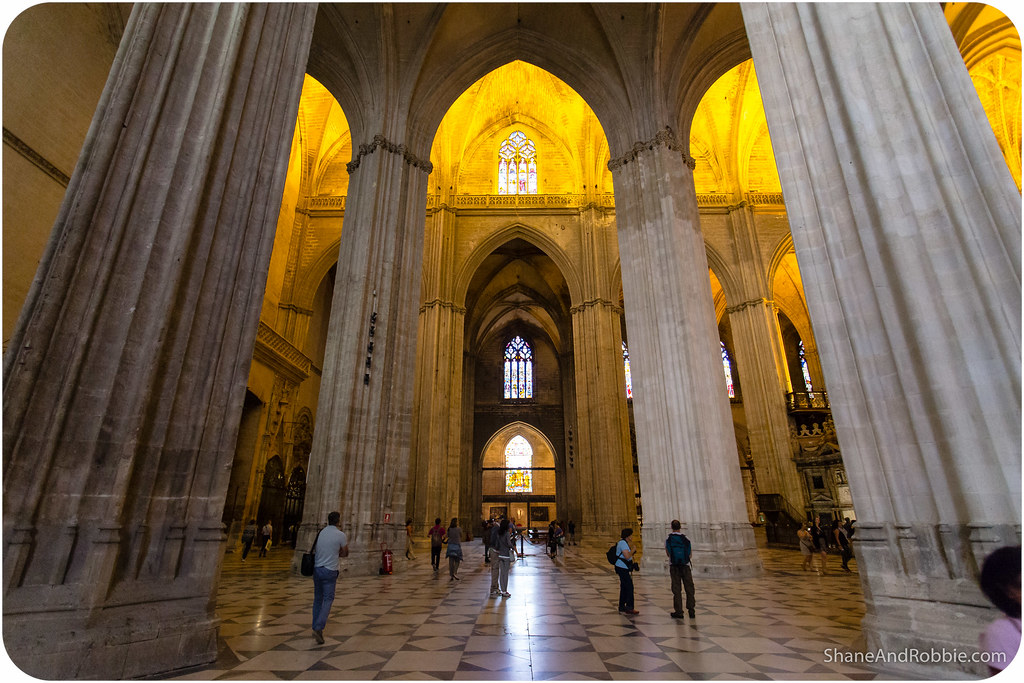 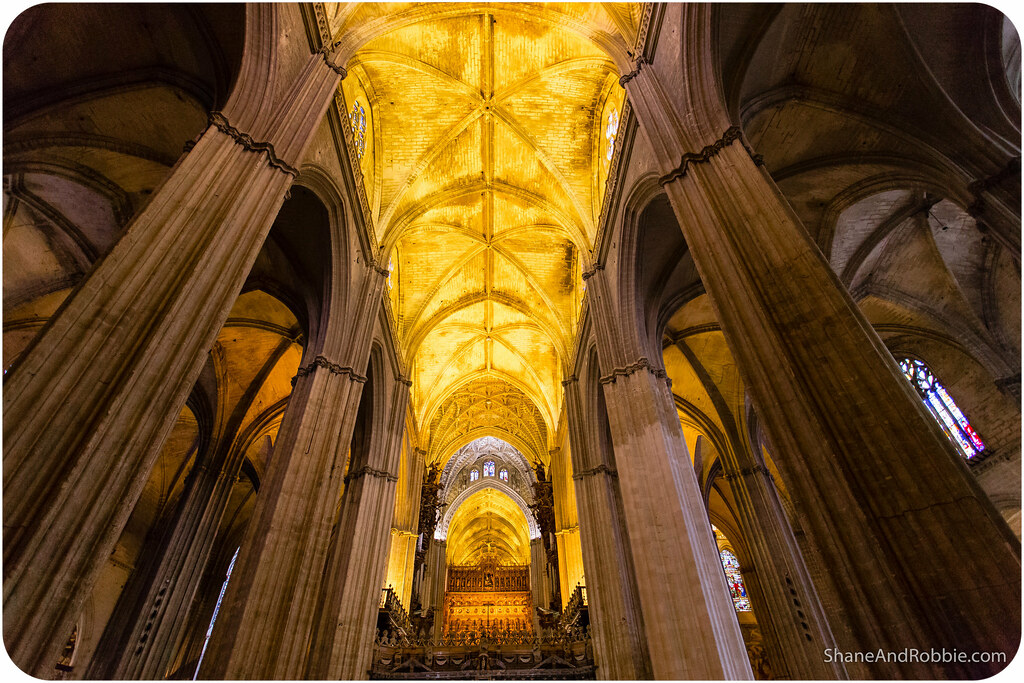 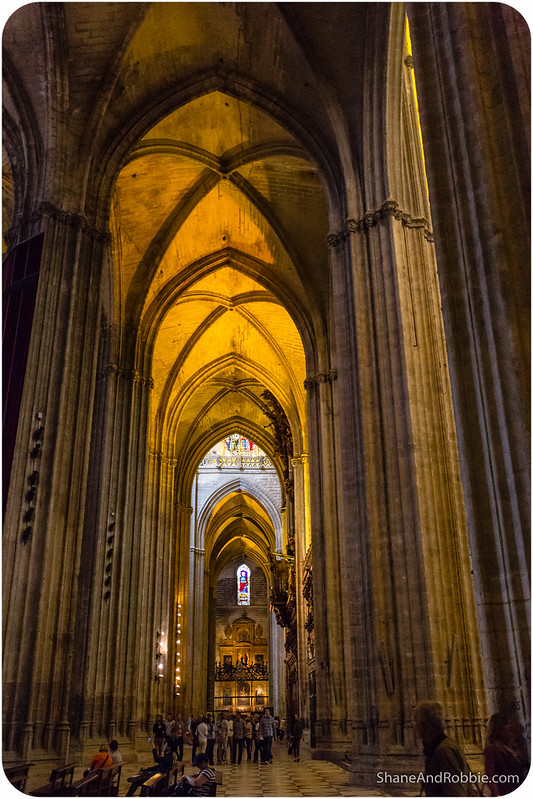 After its completion in the early 16th century, the Seville Cathedral supplanted Hagia Sophia as the largest cathedral in the world, a title the Byzantine church had held for nearly a thousand years. 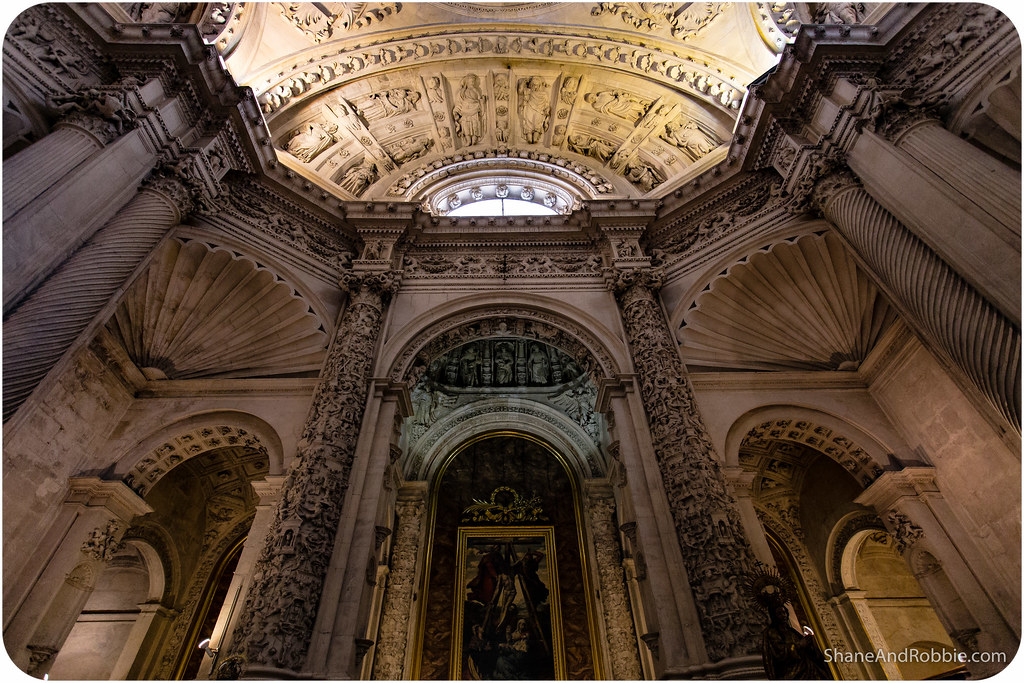 Built atop the city’s 8th century mosque, the cathedral is also the burial site of Christopher Columbus. 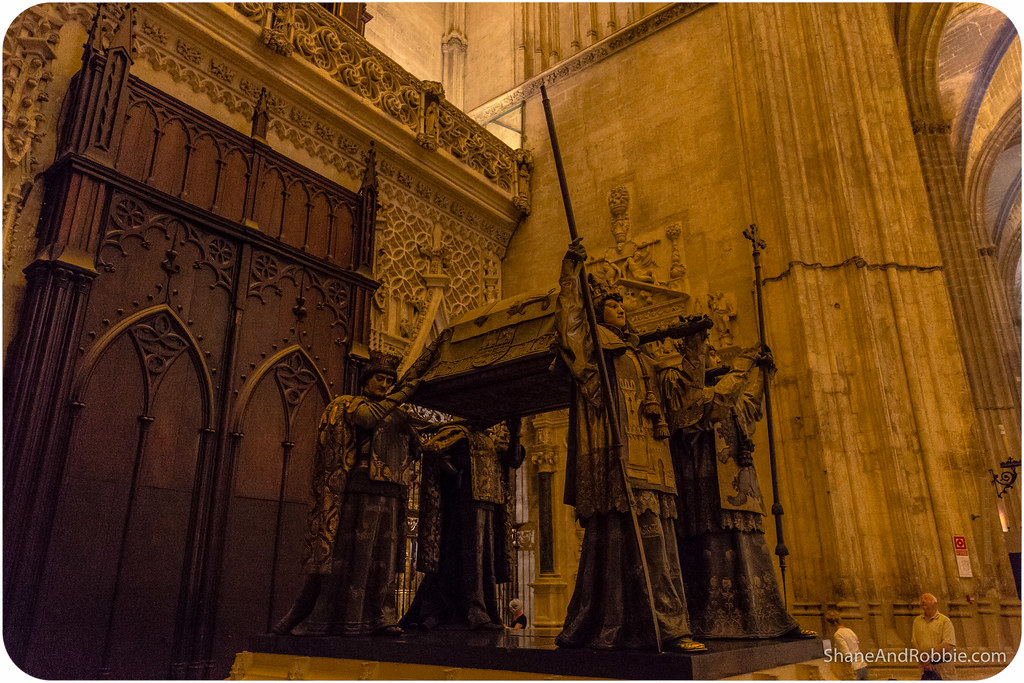 Its central nave rises to a height of 42 meters and is lavishly decorated with a large quantity of gilding. 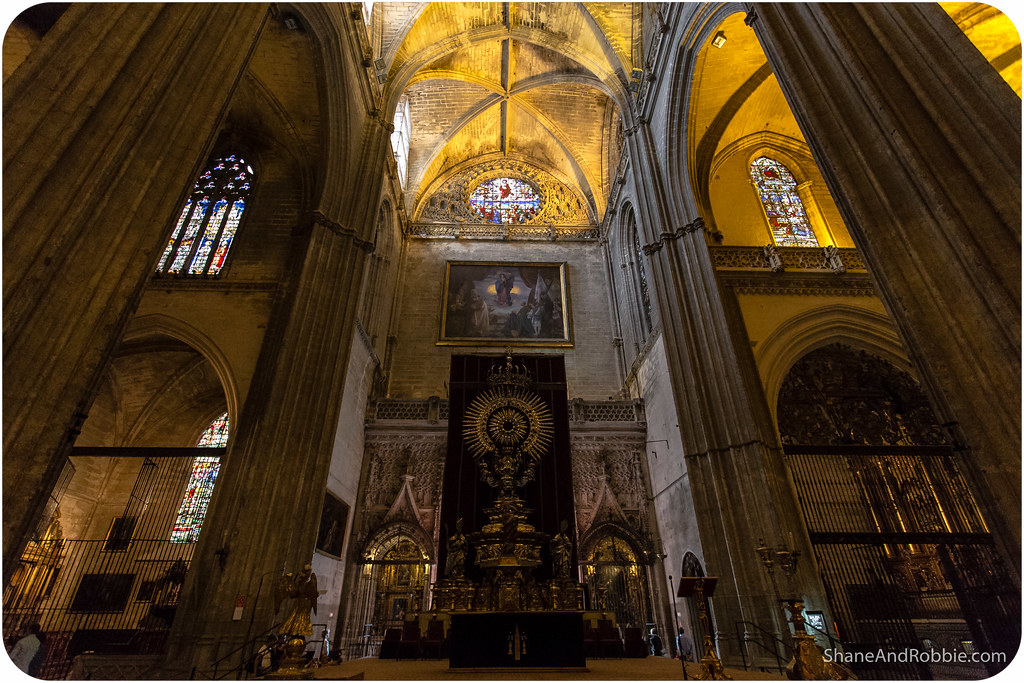 In the main body of the cathedral, the vast Gothic alter-piece dominates. This golden materpieces was the lifetime work of a single craftsman. 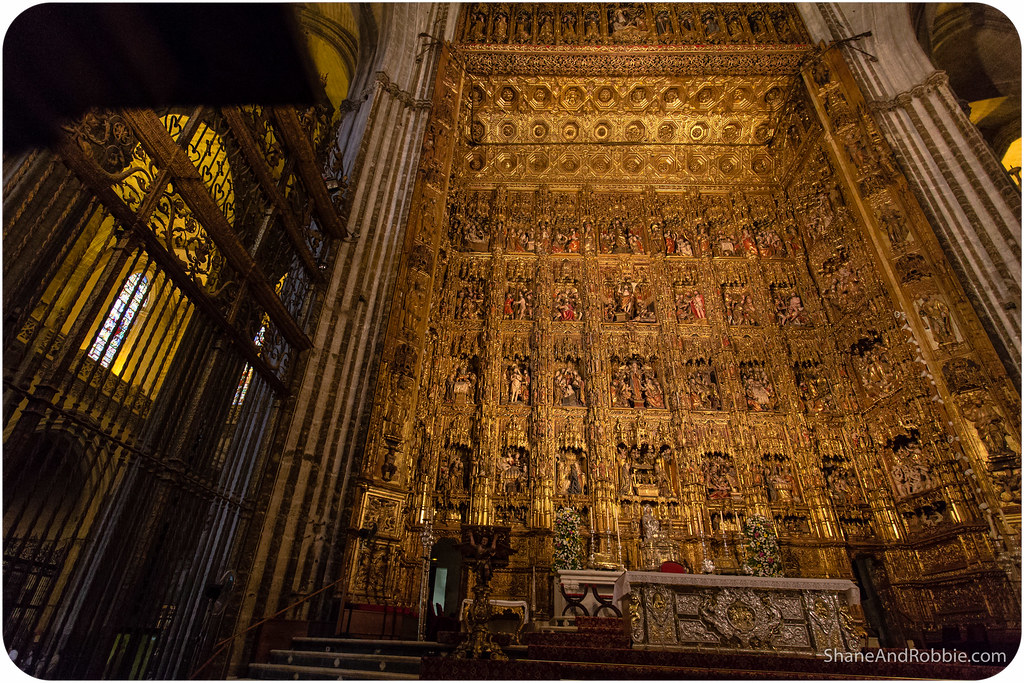 The builders used some columns and other elements from the ancient mosque, including its minaret, which was converted into a bell tower known as La Giralda, now the city’s most well-known symbol. 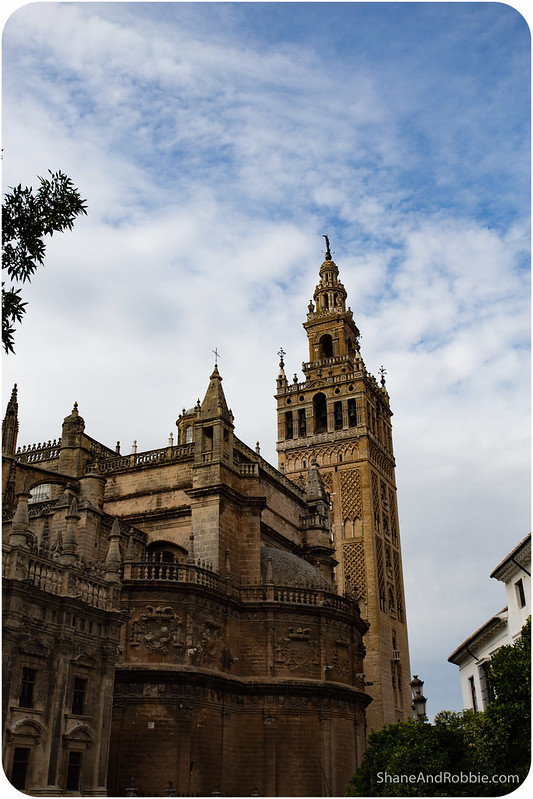 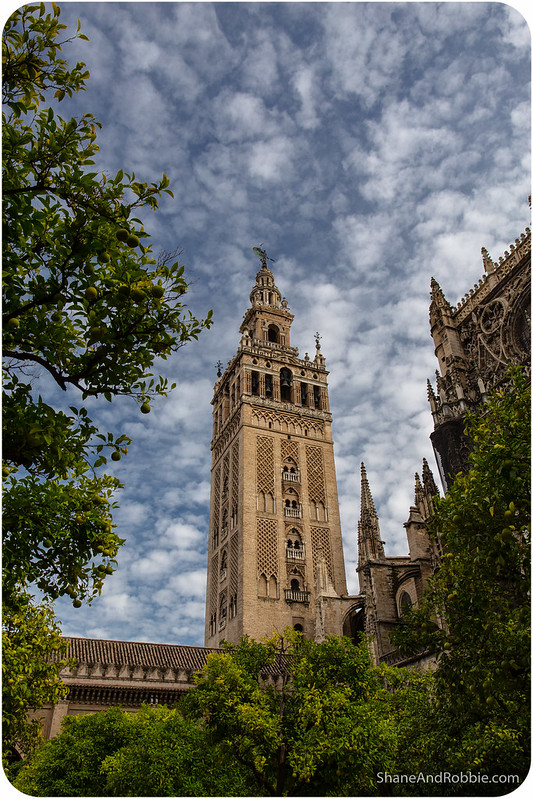 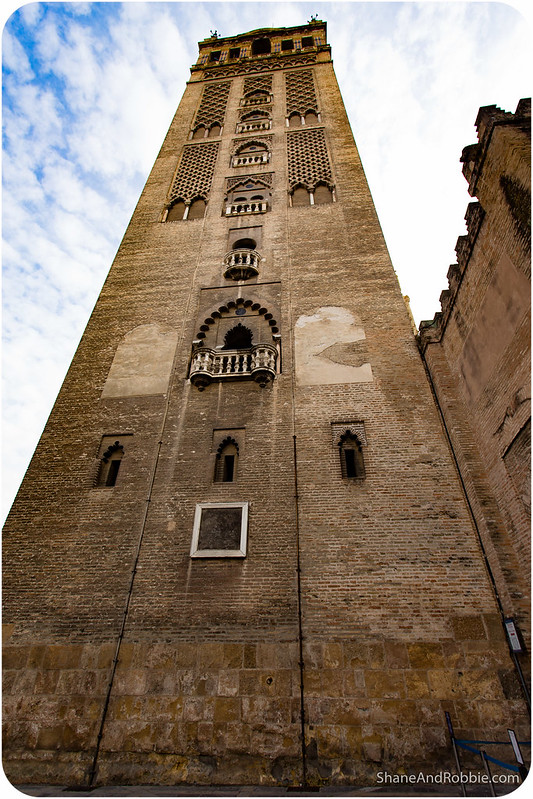 We climbed La Giralda and enjoyed some amazing views over the city from the top. 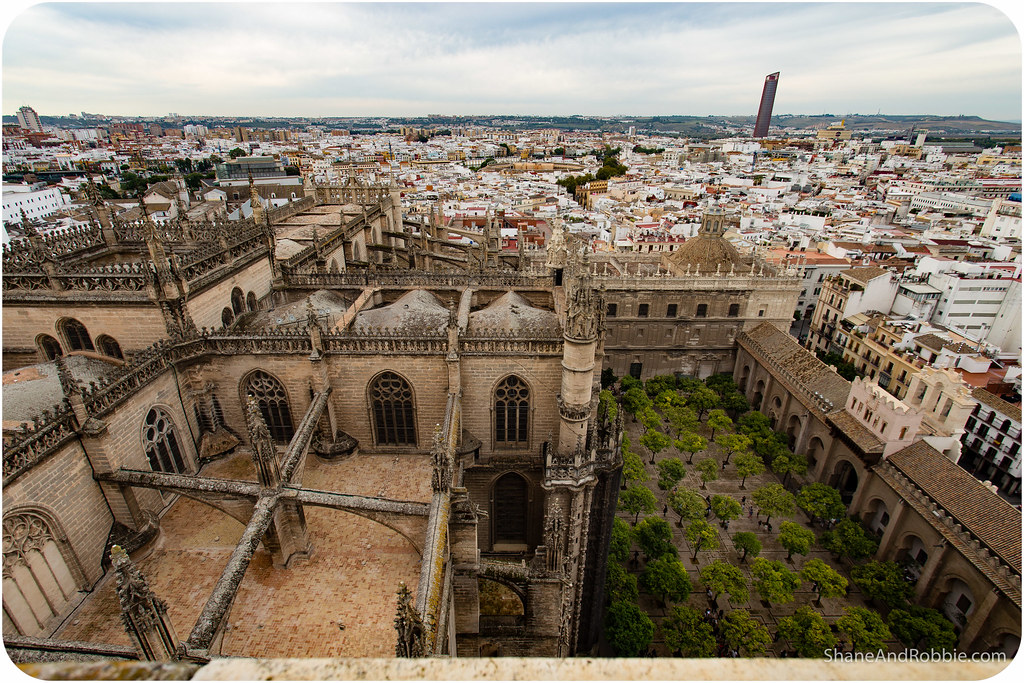 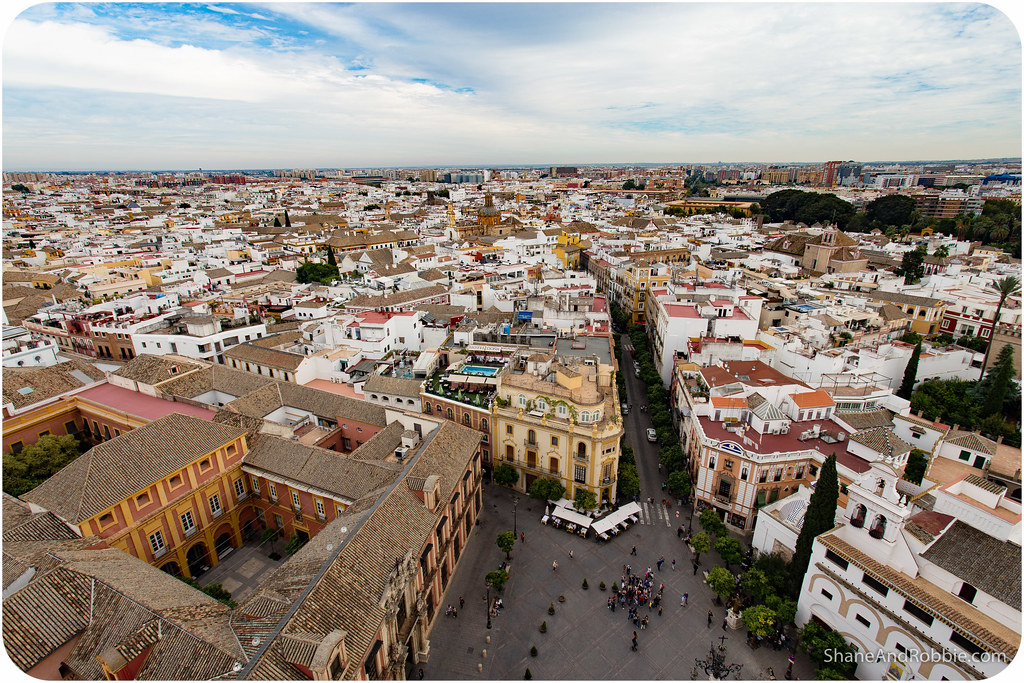 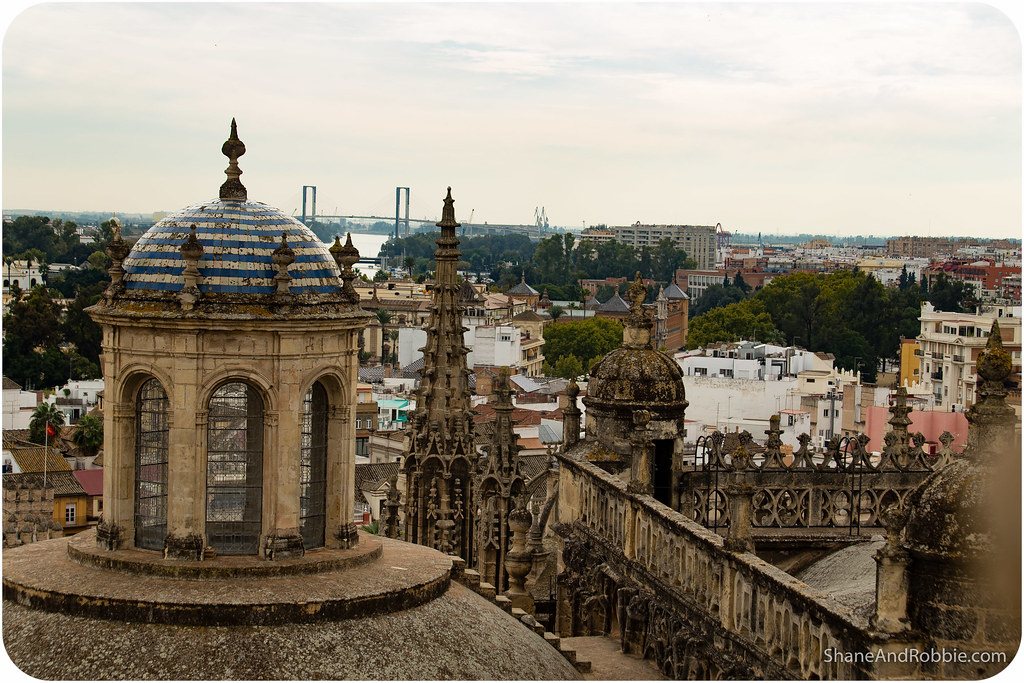 We had hoped to see more of Seville this afternoon but we just ran out of time! No, we weren’t caught up in a tapas bar eating jamon and drinking cervezas and sangria for the rest of the afternoon (nothing so fun unfortunately), instead it was Spain’s ridiculous inefficiency that stole our time away. We want to go to Cordoba on Monday, you see, and so went to the train station to see if the trains in that direction are running and, if so, to book a couple of seats. The good news: yes the trains to Cordoba are running. The bad news: it took us 2 hours to book our seats. “Why so long to make 2 simple seat reservations?”, you ask. Why, because there’s a bloody RENFE workers union strike on, of course! This meant there was just 1 ticket counter open and service was super slow. At least we got our reservations though, and had enough time to at least see the cathedral before the sun set on us! And it means we get to enjoy the rest of Seville tomorrow…