Our travels through Andalusia came to an end today with a 5 hour bus ride from Granada to Madrid*. We’re now in Madrid, Spain’s illustrious capital, and will be here for the next few days before flying out and leaving Europe behind completely (next stop: Thailand!). Since the bus trip took up most of our day we didn’t really get to see much our new home-away-from-home, but what we DID see confirms that Madrid is one big, bustling capital. The highlight of our day however was, without a doubt, our visit to Mercado de San Miguel, where some of the best of Madrid’s fresh food was on display and the tapas were plentiful.

*In case you’re wondering: 5 hours is about 1 hour too long for a bus trip. Around the 4 hour mark our butts became numb and the bus ride began to drag on. 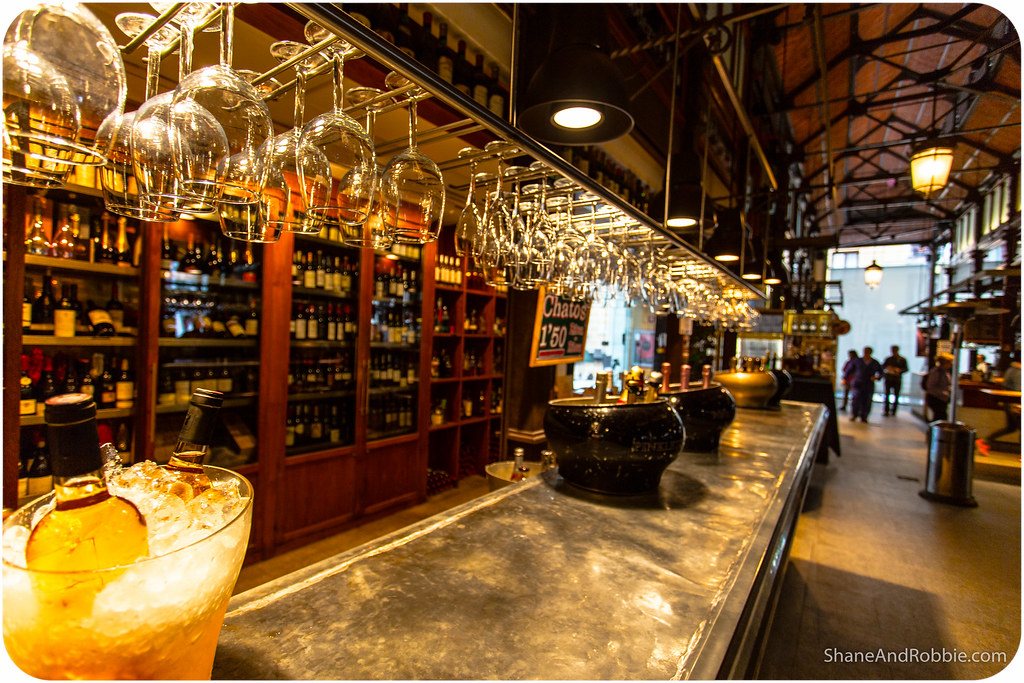 The bus ride from Granada to Madrid took us through some of the prettiest mountains scenery we’ve seen in a while*. Directly North of Granada we drove through the Sierra Mágina, a region of steep, rocky limestone mountains famed for their prehistoric cave paintings and wildlife (the remotest corners of the mountain range still provides refuge for a small population of wild bears and wolves). During the 13th and 15th centuries, the Sierra formed a natural mountainous border between the Muslim kingdom of Granada and the Christian territory of Castilla and remains of fortifications and castles dating from that time are still dotted through the mountainous terrain.

*There are a lot of hills and mountains in this country. Who knew that Spain is Europe’s second most mountainous country after Switzerland?! 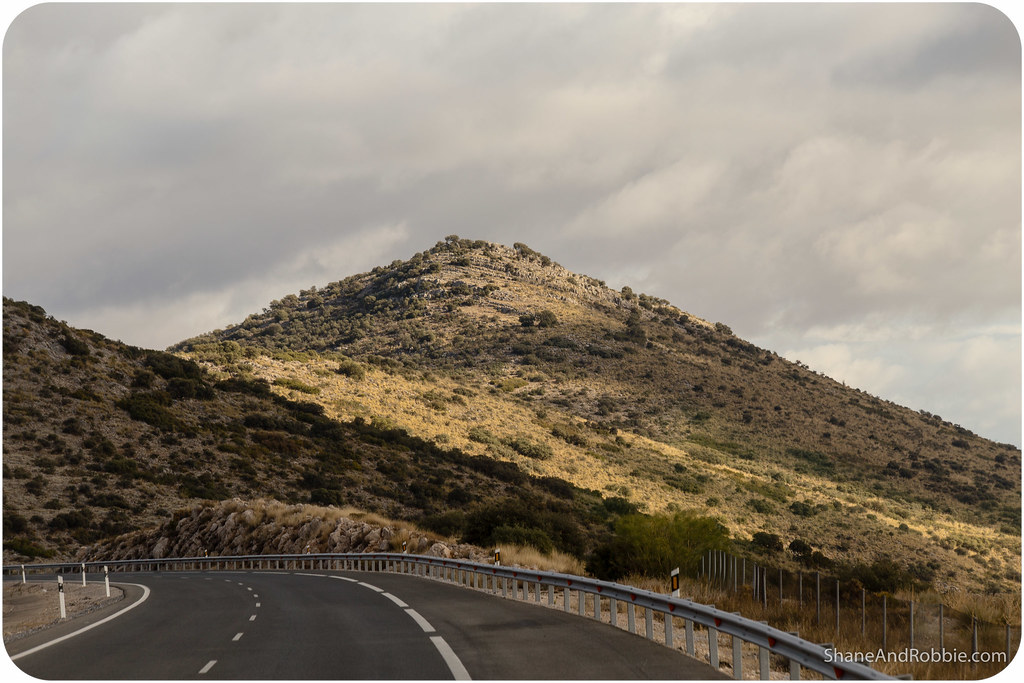 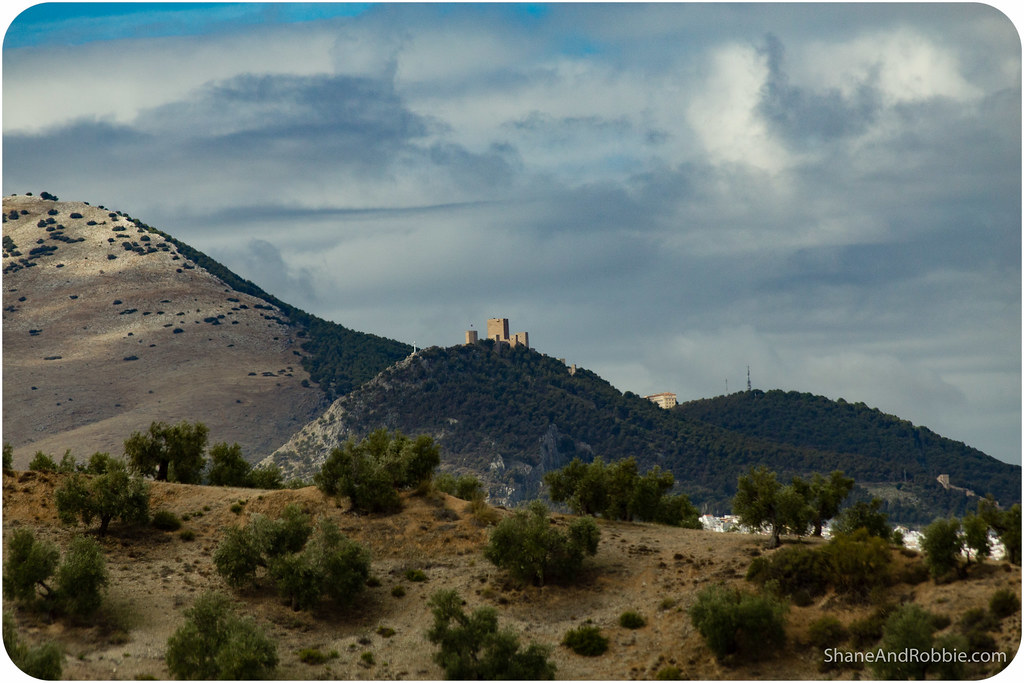 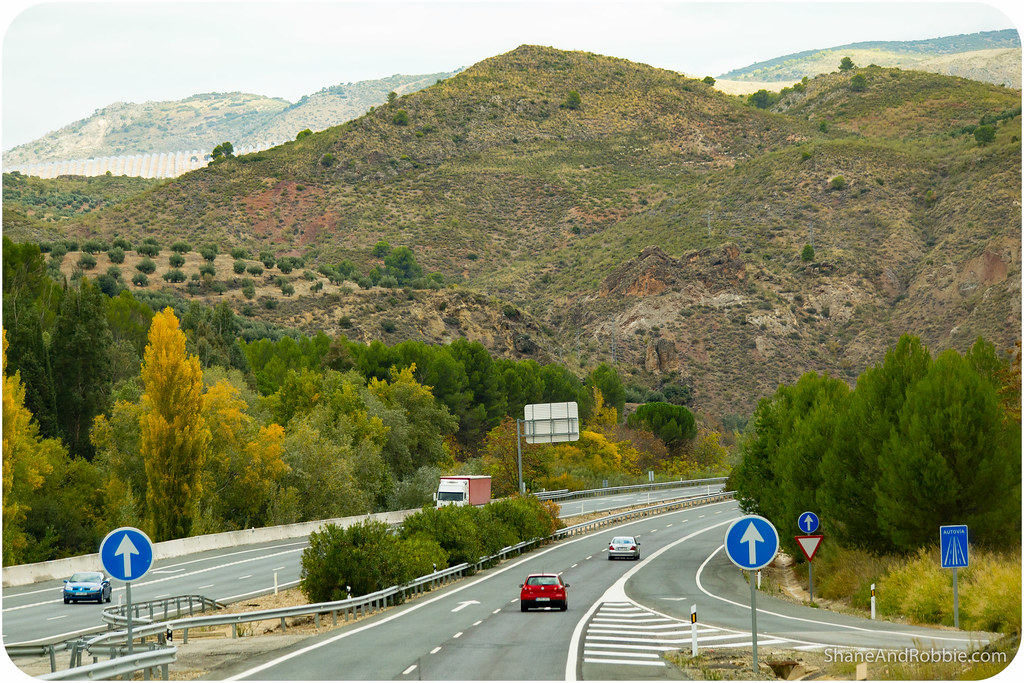 Further on we passed the valleys and foothills of the Sierra Morena. Here the terrain was dominated by olive groves – acres and acres of olive trees from which some of the world’s finest olive oil is produced. This is one of the main systems of mountain ranges in Spain. It stretches for 450km from East to West across the south of the Iberian peninsula, forming the southern border of the Meseta plateau. 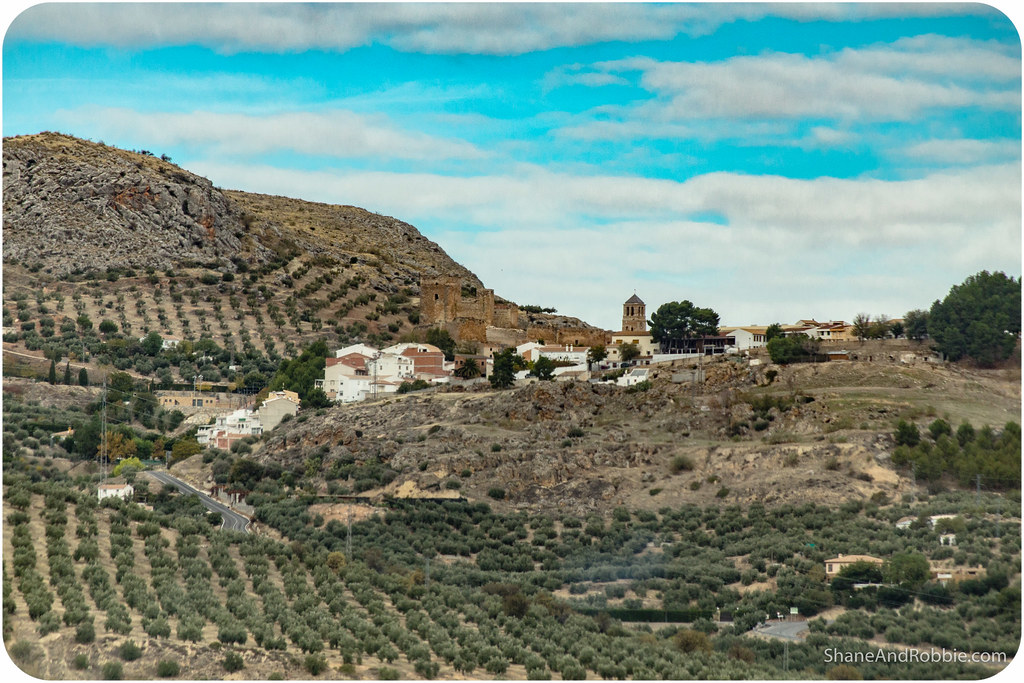 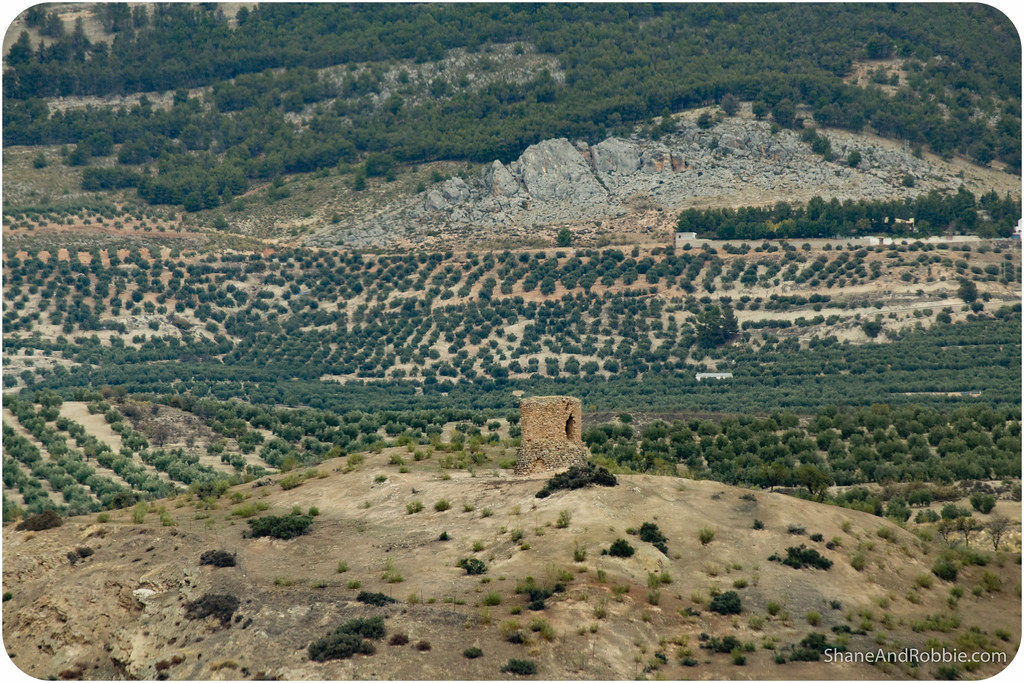 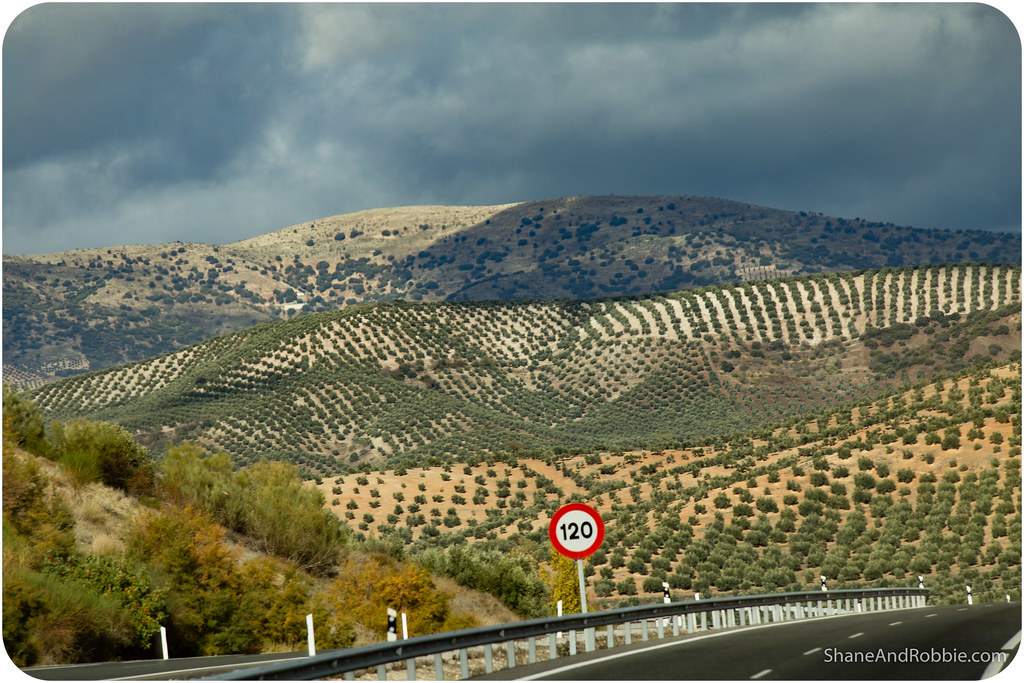 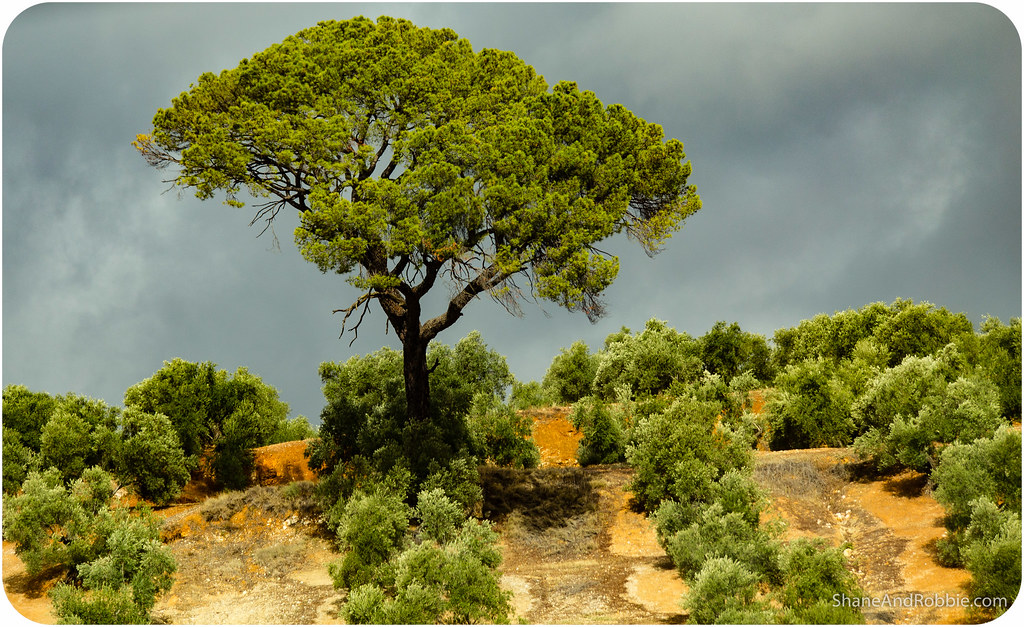 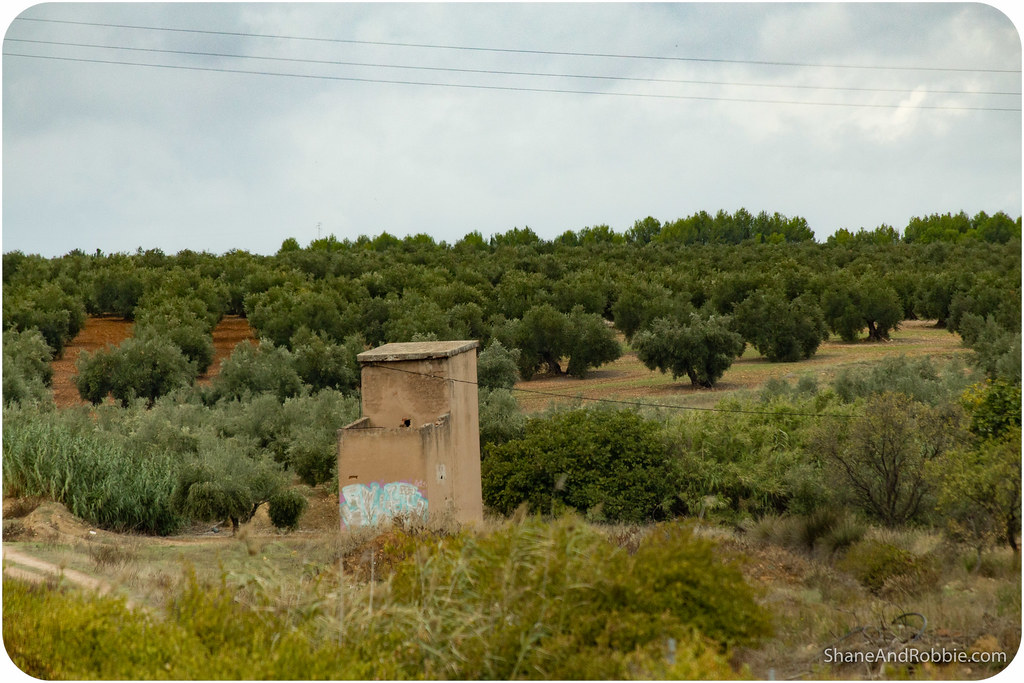 Coming down out of the mountains of the Sierra Morena we found ourselves on the great Spanish Meseta. This vast plateau in the heart of Spain is dry and flat, as we discovered when we were travelling across Castilla in Northern Spain, from Burgos to Leon and beyond. The colours here were exactly what you might picture when you think of Spain – the reds, oranges, and yellows of a country burnt by the sun. Parts of it reminded us of Aus (arguably the greatest of the sunburnt countries). 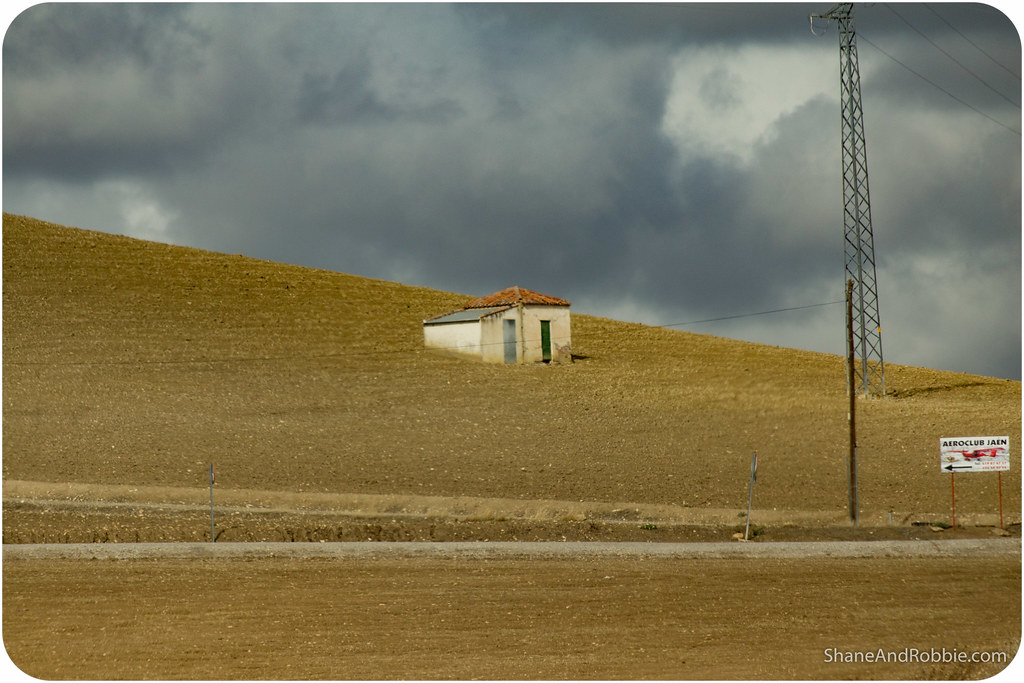 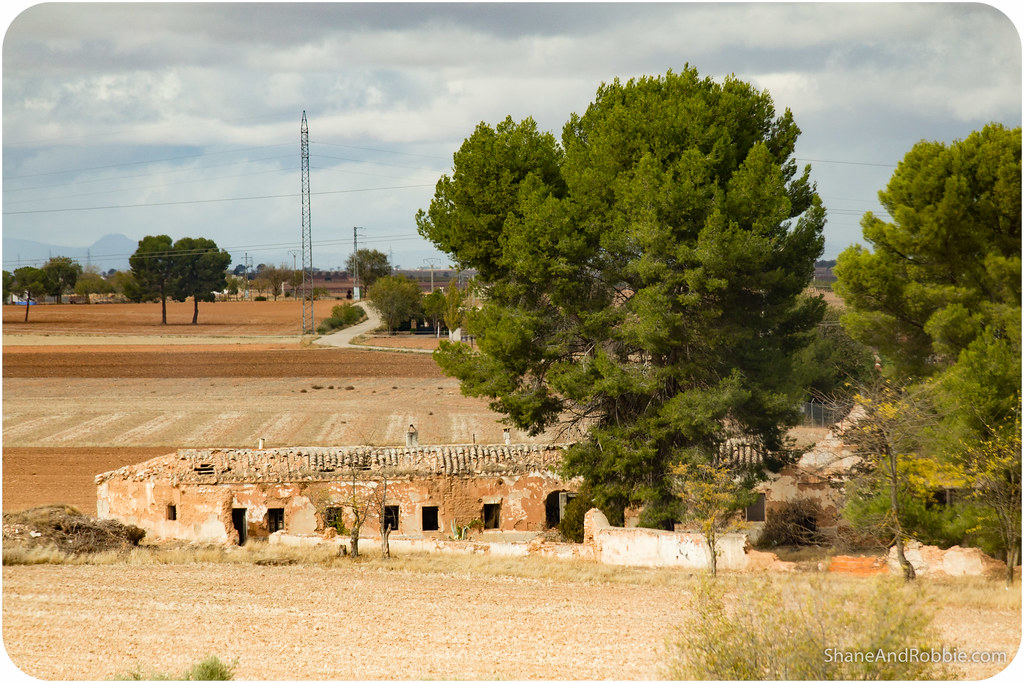 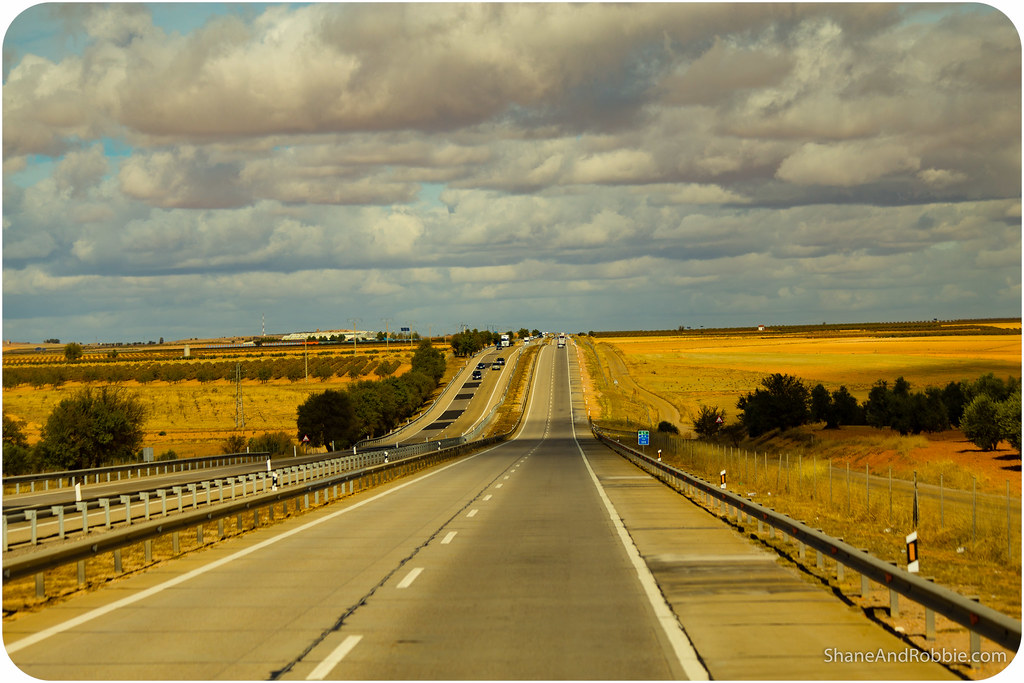 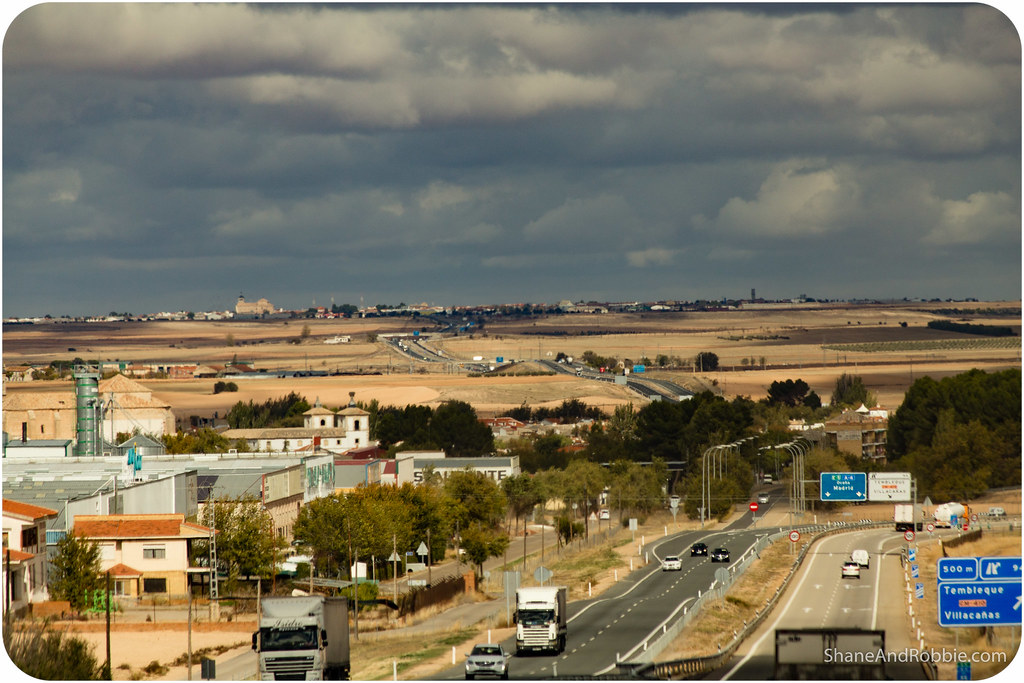 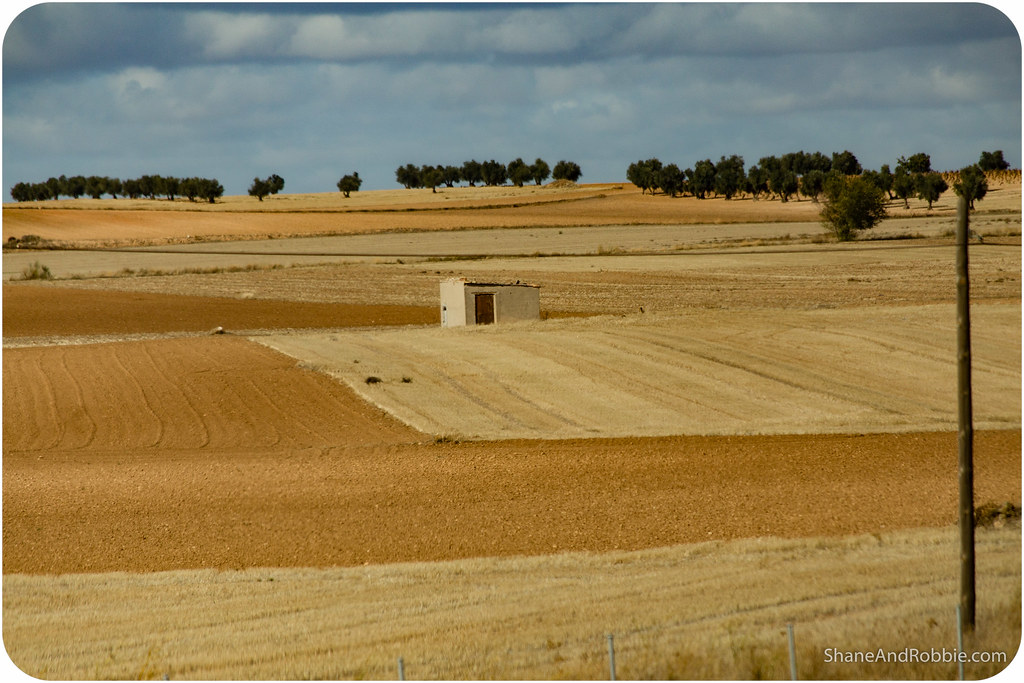 Madrid sits virtually in the geographical heart of modern-day Spain, surrounded by the vastness of the Meseta. This busy capital of 7 million souls is Spain’s capital and the 3rd largest city in the EU (after London and Berlin). It was actually a bit of a shock getting off the bus and finding ourselves in the middle of such a big city – we’ve been in such small towns for most of our trip through Portugal and Spain (excluding Barcelona) that we’d almost forgotten what it felt like to be in a metropolis! We soon found our feet though and managed to find our accommodation, check in, and then go hunting for some food. Luckily our hotel is not far from one of Madrid’s premier eateries: Mercado San Miguel. 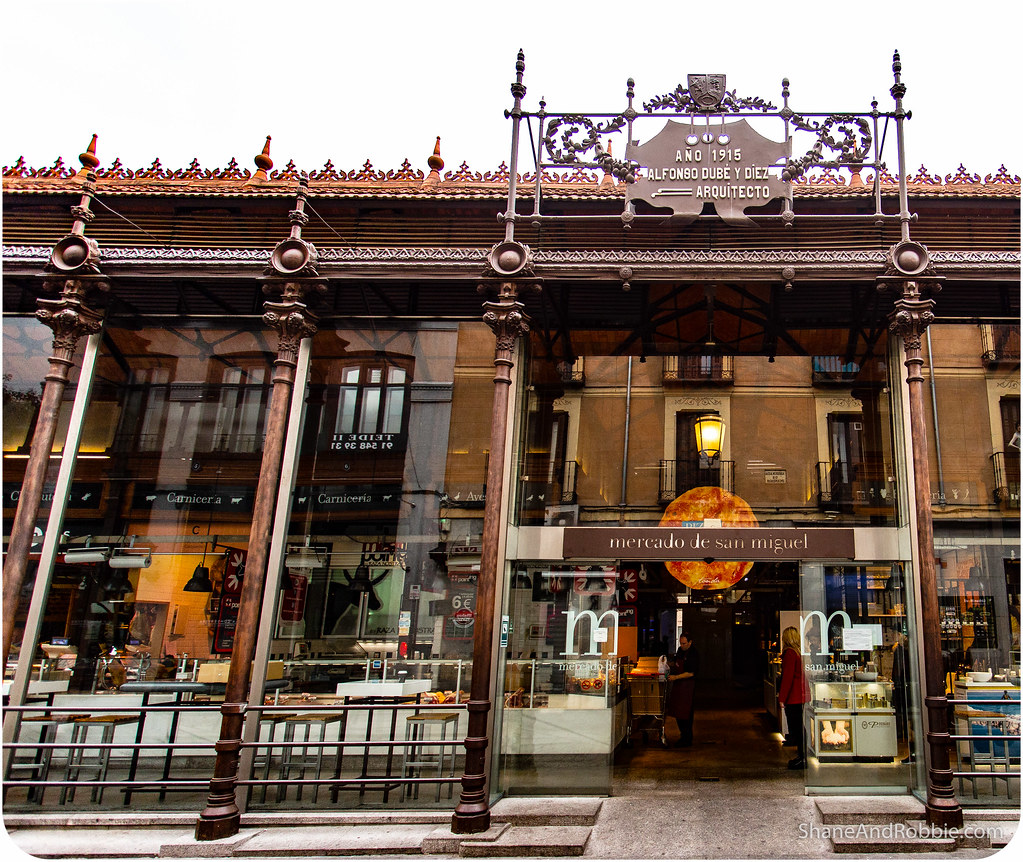 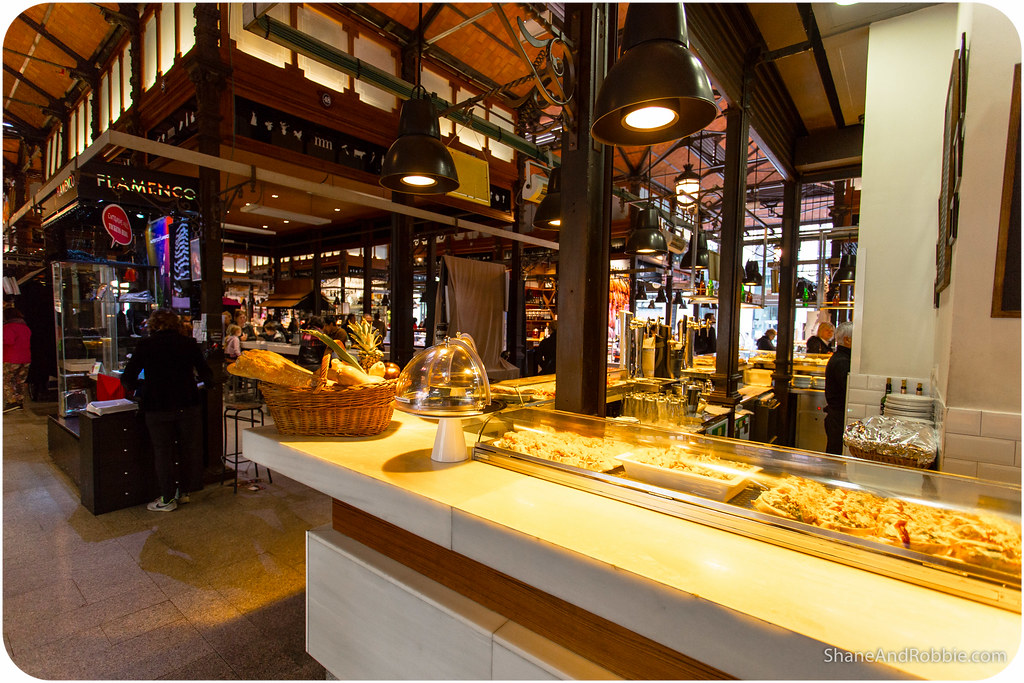 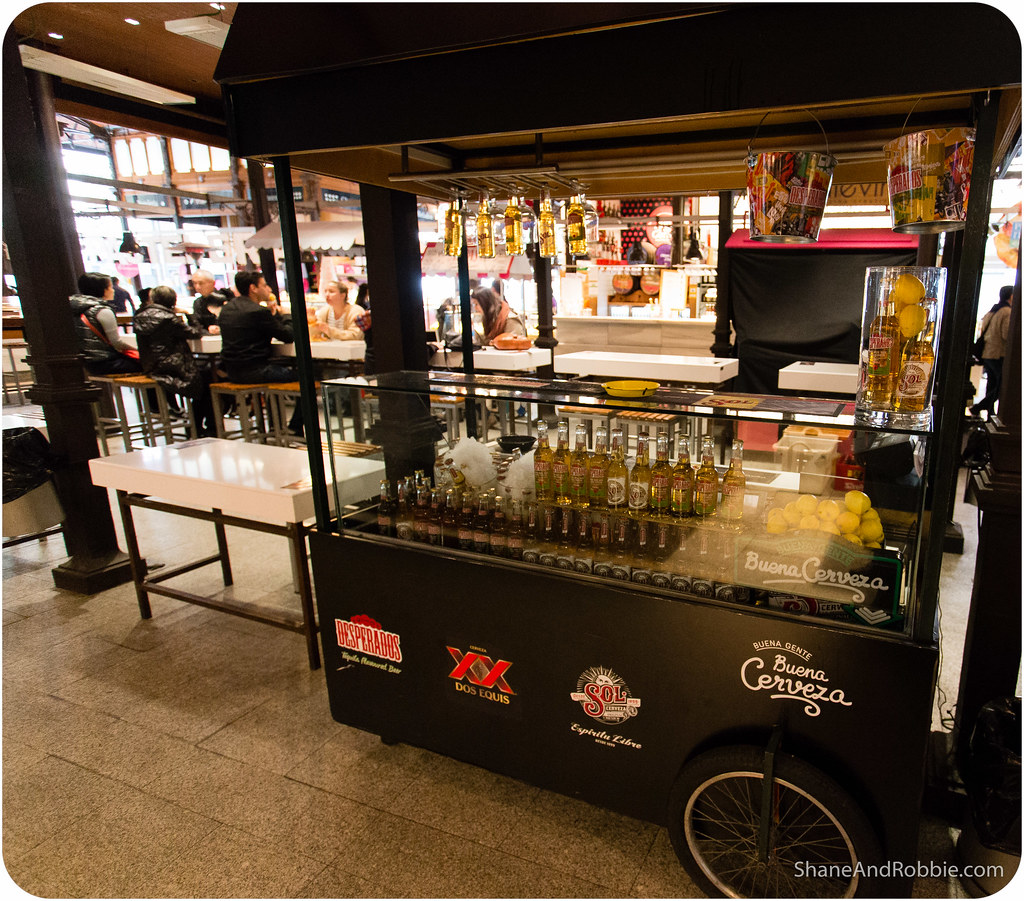 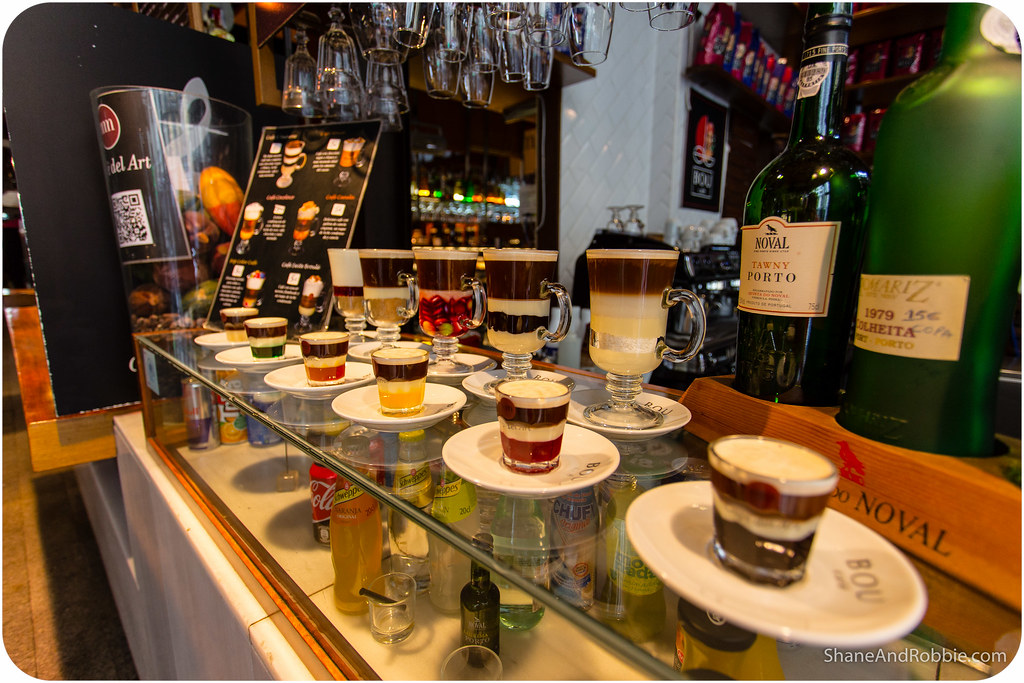 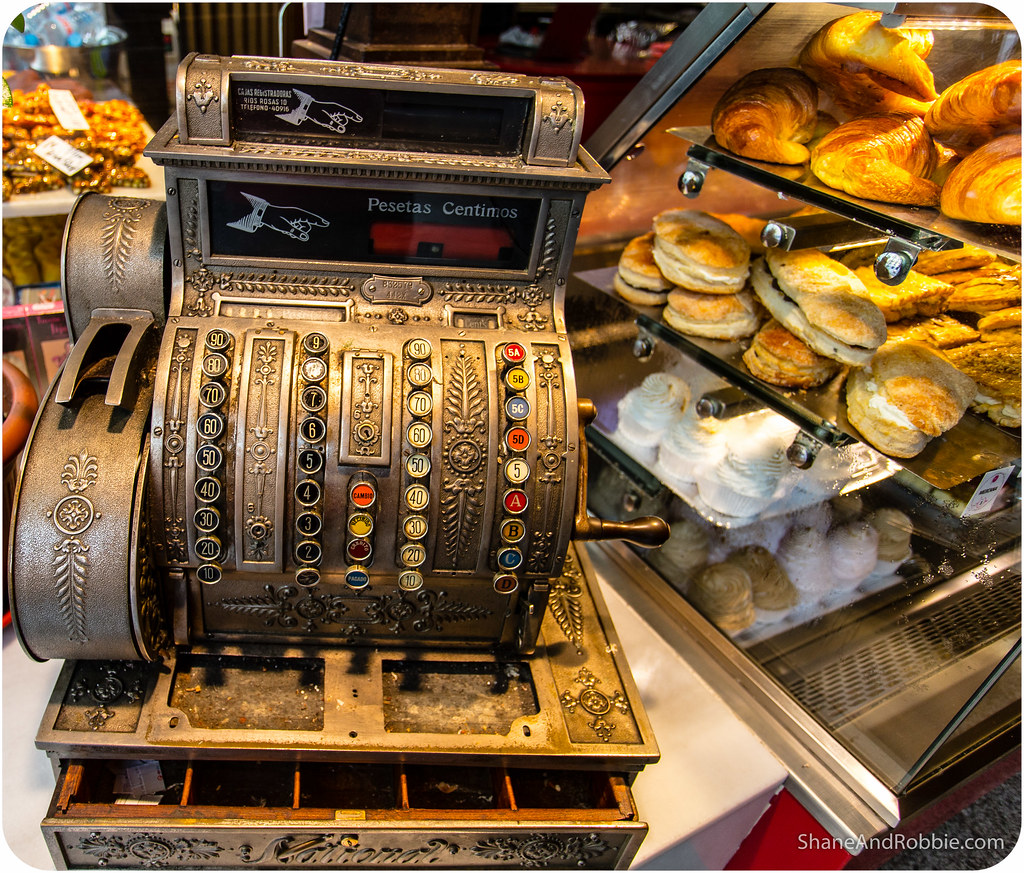 Located in the heart of the city, Mercado San Miguel was once Madrid’s main fresh food market. The iron-and-glass market place opened in 1916, but fell into disrepair in the late 20th century as supermarkets became more common. Eventually all but abandoned, the building was bought by private investors in 2003 and restored. These days it’s been reinvented as a touristy gourmet tapas market where vendors sell hungry foreigners like us a wide variety of freshly prepared tapas, as well as jamon, olives, baked goods, fruit, veggies, seafood, and fresh meat. 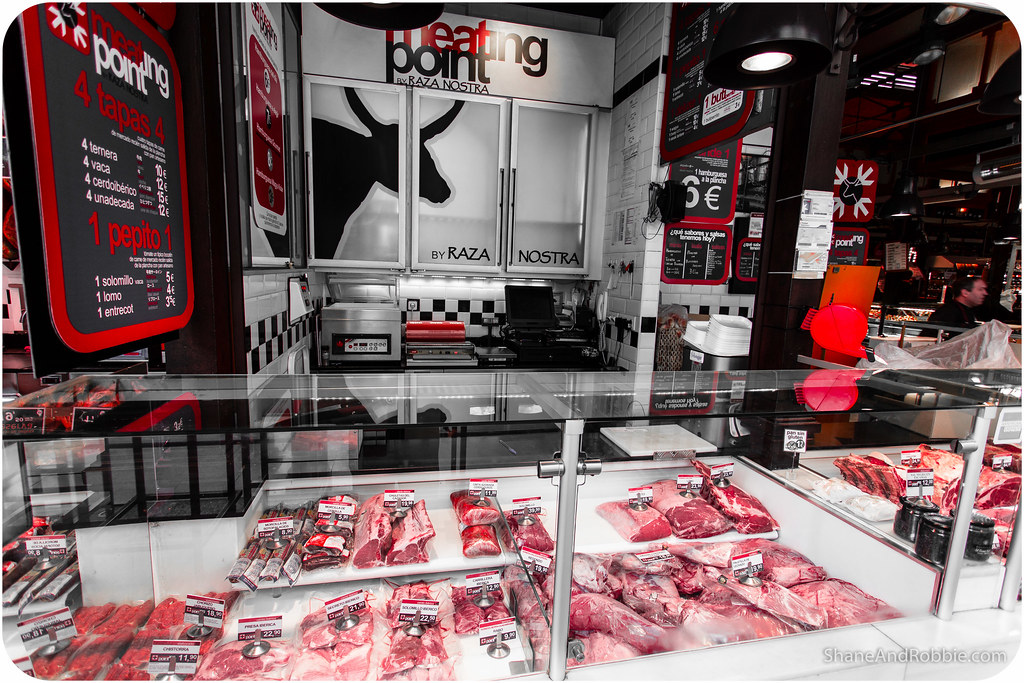 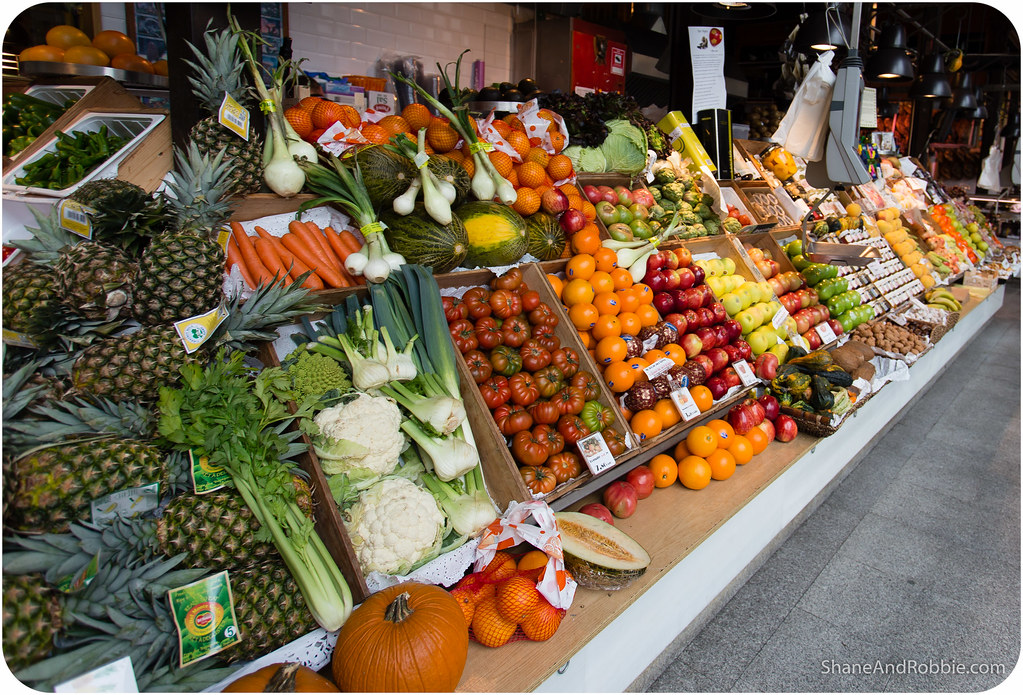 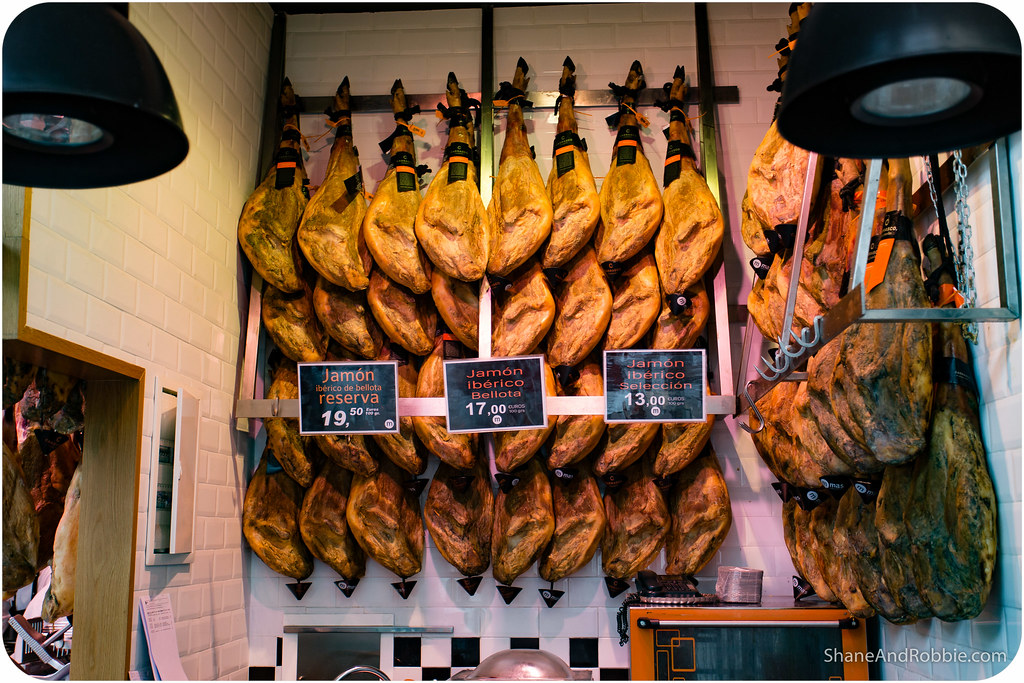 As touristy as it is, the San Miguel market made a great stop for our late lunch/ early dinner*. There were bocadillos (i.e. snacks) of jamon on crusty bread, freshly cooked seafood, and paella by the spade-full. The fresh produce stall had rows of colourful fruit smoothies on sale, and the ever-popular bakery was tempting people with its tarts, flans, cakes, and biscuits. Needless to say we were well fed at Mercado San Miguel!

*Meal times here in Spain seem to be a very fluid thing. You can have breakfast any time from 7:00am to 1:00pm; lunch can start as early as 2:00pm and end any time around 4:00-5:00pm; and even though dinner may not start until 8:00-9:00pm, you can satisfy any pre-dinner hunger pangs at any likely looking tapas bar. Out late? No problem! Most tapas bars are open until 2:00am and there’s a few churros and chocolate places in every city that stay open 24 hours per day! In all seriousness you can eat nonstop in Spain. Beer at 10:00am is also not a problem, nor is coffee at midnight. 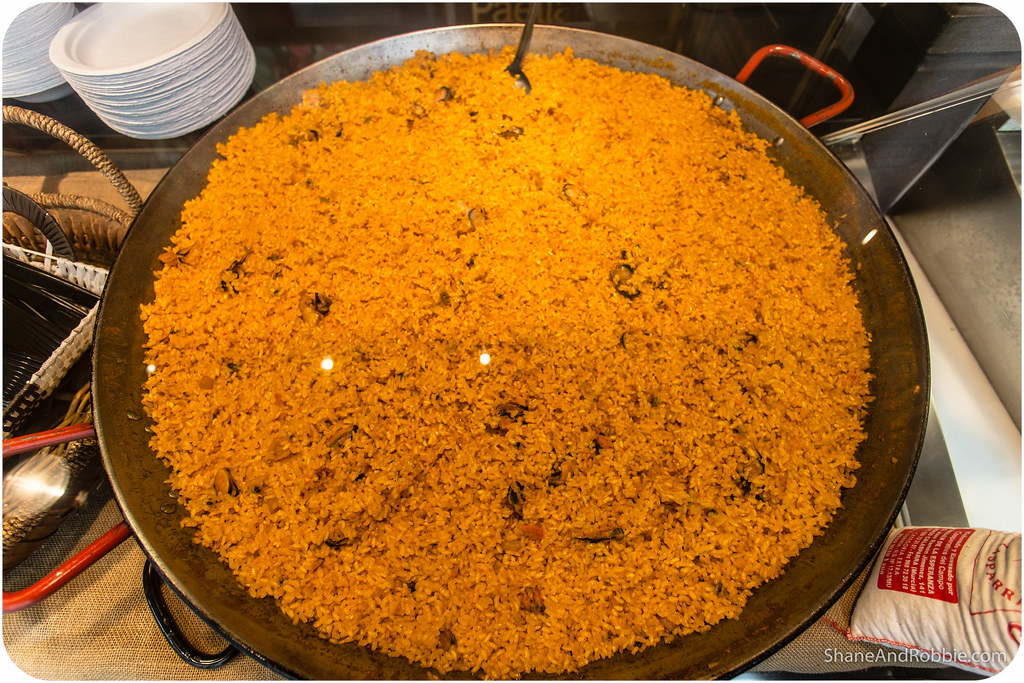 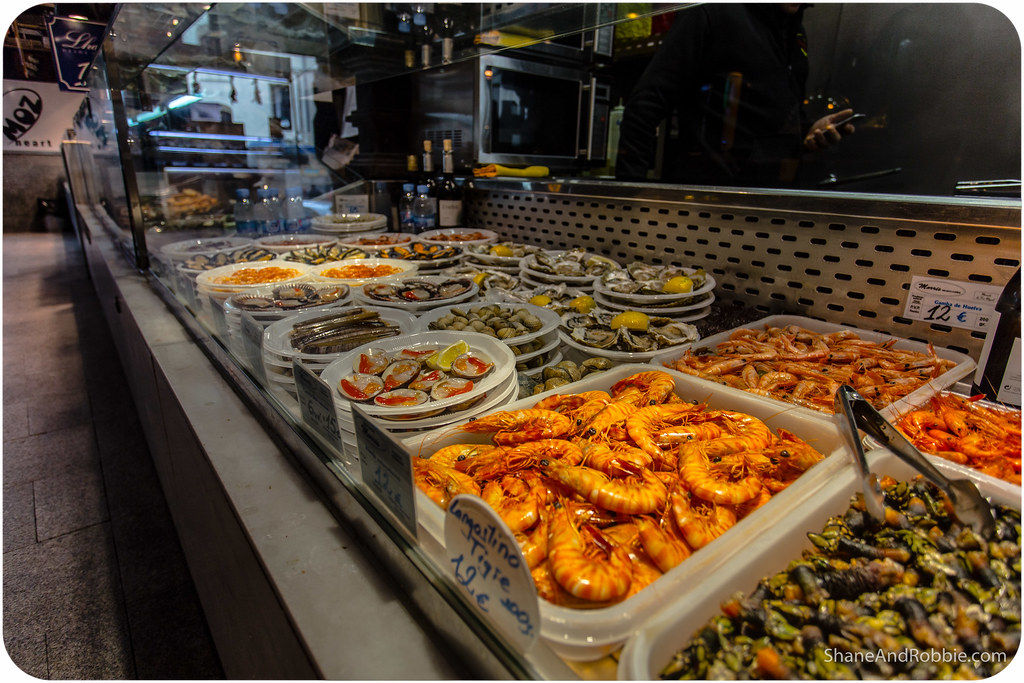 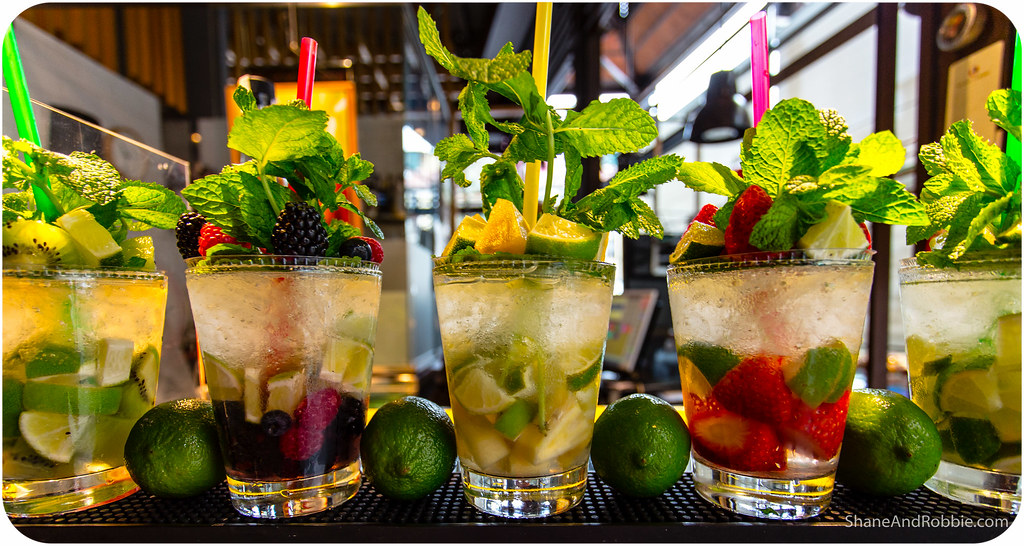 Heading from Mercado San Miguel back towards our hotel we stumbled across a hairdresser advertising cheap haircuts. We’ve both been looking a bit scruffy lately (i.e. furry, grey, and unkempt) so the opportunity to get a tidy up was too good to pass up! A short while later we emerged looking far less fury and far more fabulous. Definitely a worth while way to spend a hour or 2! 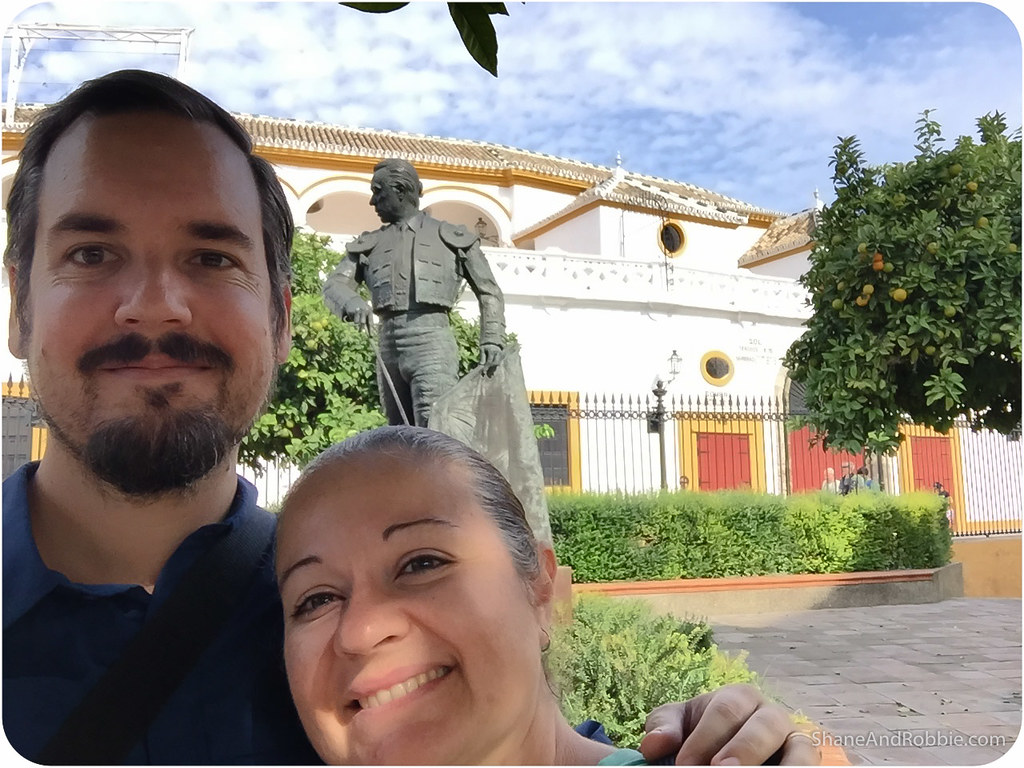 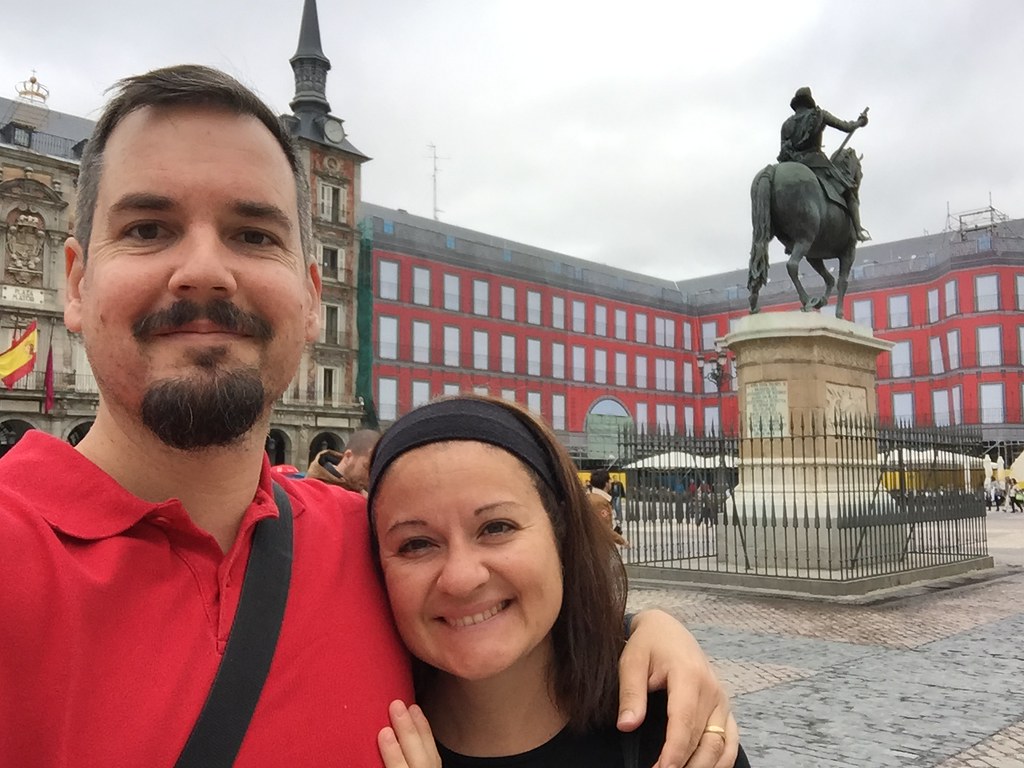