ALL SAINTS’ DAY IN MADRID

Today happens to be All Saints’ Day and here in Madrid, as in the rest of this profoundly religious country, people spent the day honouring their deceased relatives. On this day Spanish people buy flowers and gather in the cemeteries to regale their dead loved ones. It’s also an especially busy day for churches, with most people attending special masses held in memory of the dearly departed to supposedly shorten their time spent in purgatory. It’s not all about death, however, All Saints’ Day here also seems to provide the perfect excuse to spend the day with family, eat lots, and celebrate life – something it seems the Spanish do quite enthusiastically! What this meant for us is that we saw Madrid at its colourful, celebratory best today. There were stalls everywhere selling colourful flowers, especially chrysanthemums; and families strolling through the streets, laughing and enjoying the autumn sunshine. 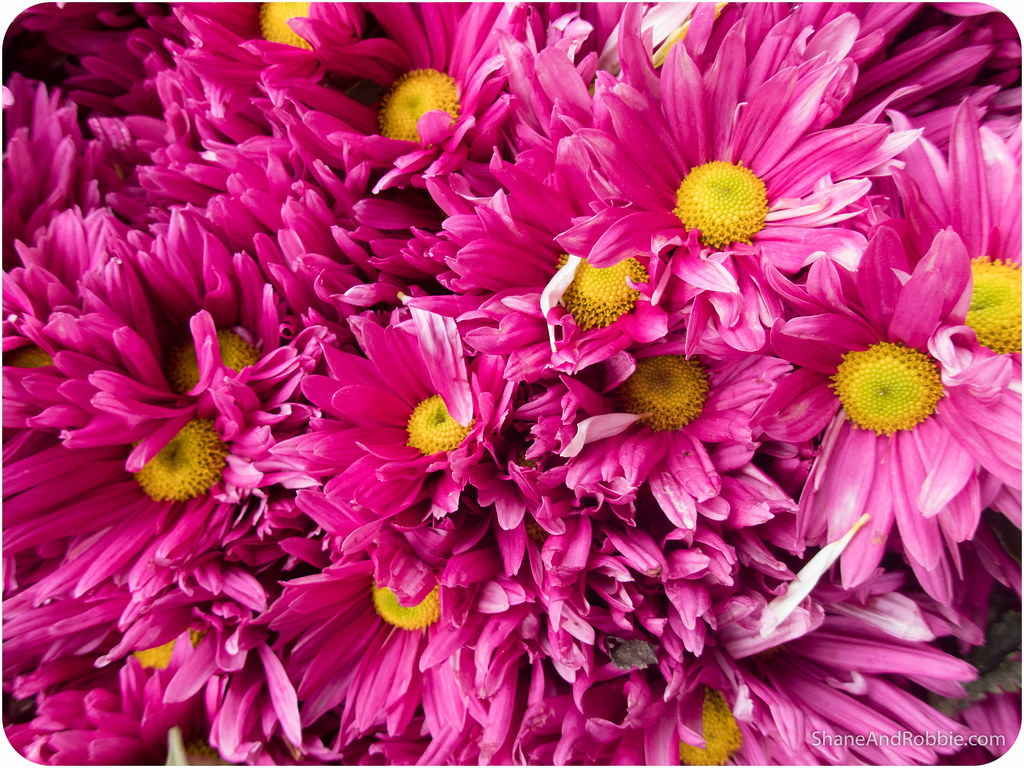 We started our walk through Madrid at Parque del Buen Retiro, one of the largest parks of the city and part of a network of green spaces that together form the “lungs” of the city. With the trees shedding their leaves and autumn colours everywhere, the park was lovely. 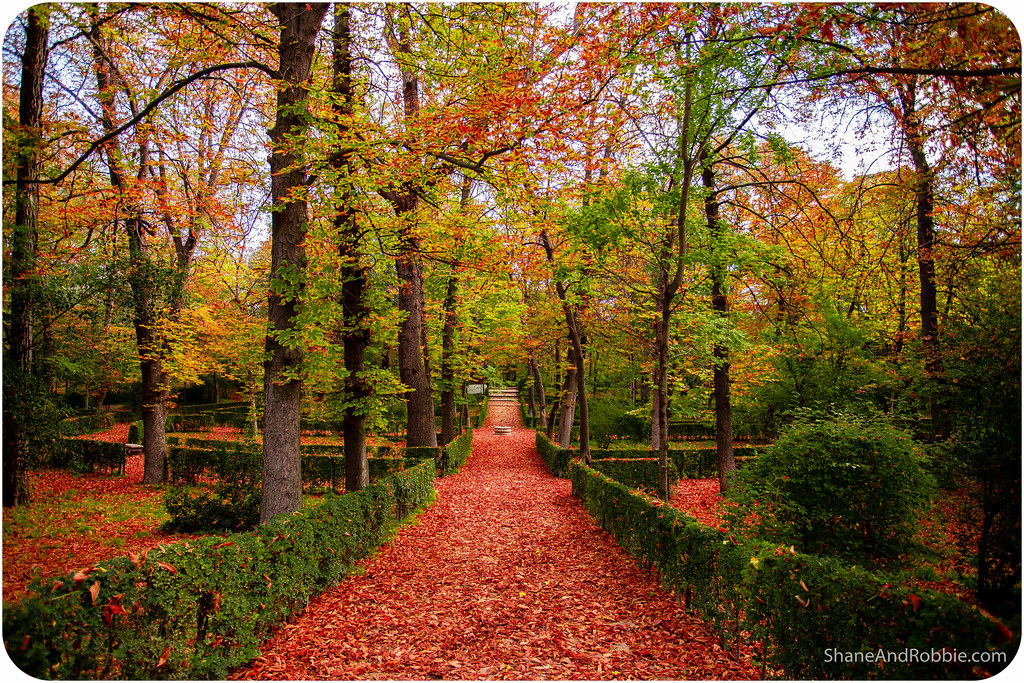 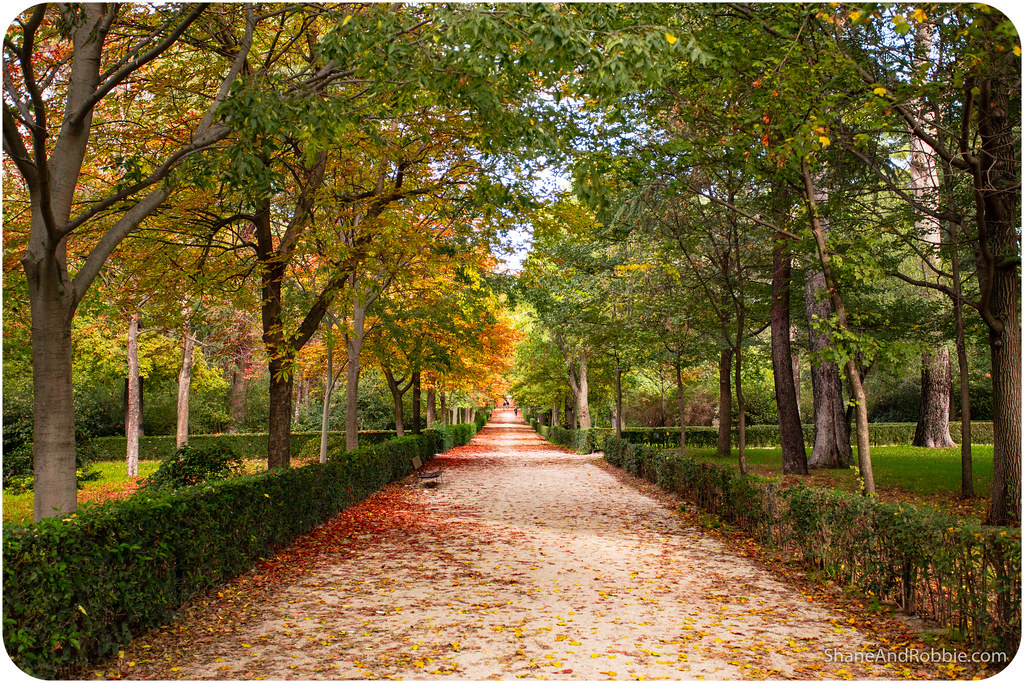 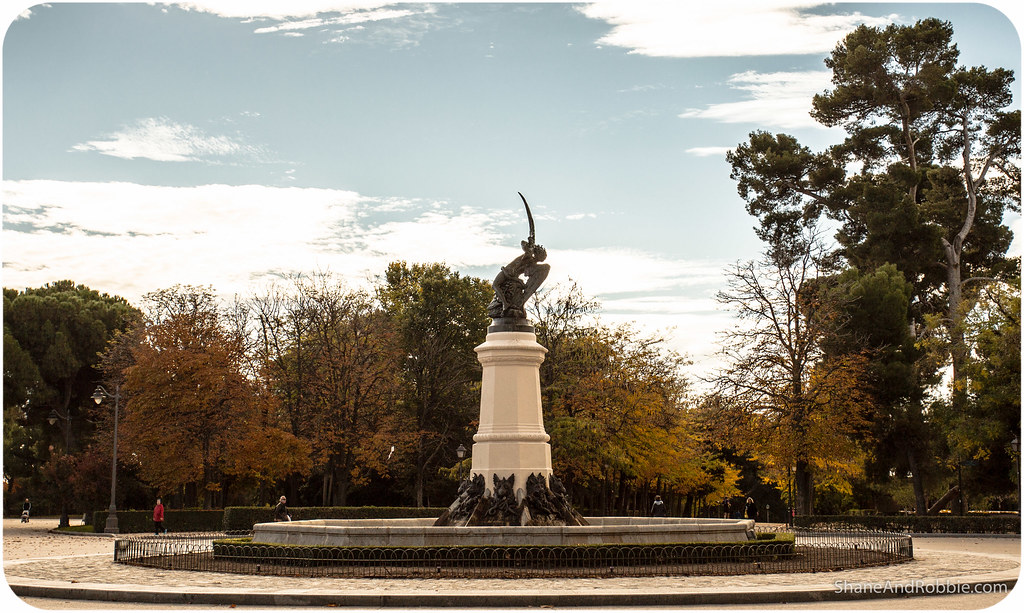 Parque del Buen Retiro belonged to the Spanish monarchy until the late 19th century, when it became a public park. And it seems the locals take full advantage of having this immense green space on their doorstep – the place was packed this morning with joggers, people walking their dogs, families out for the day, and couples strolling hand-in-hand. 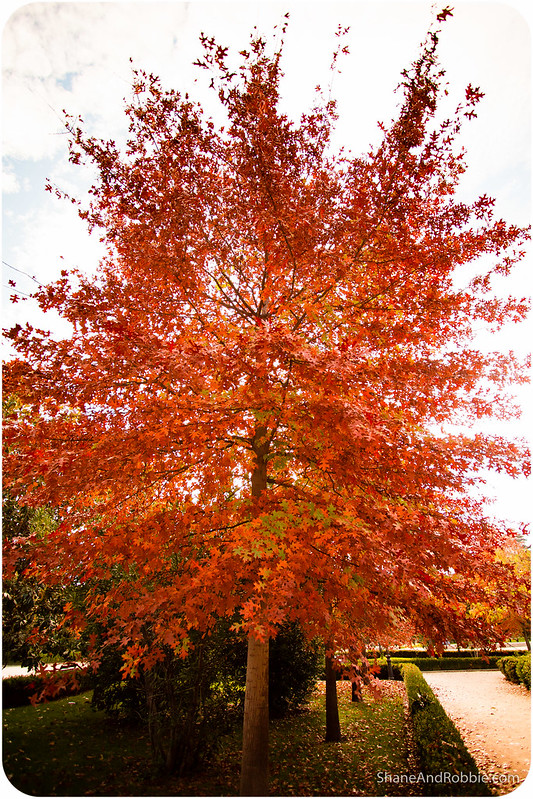 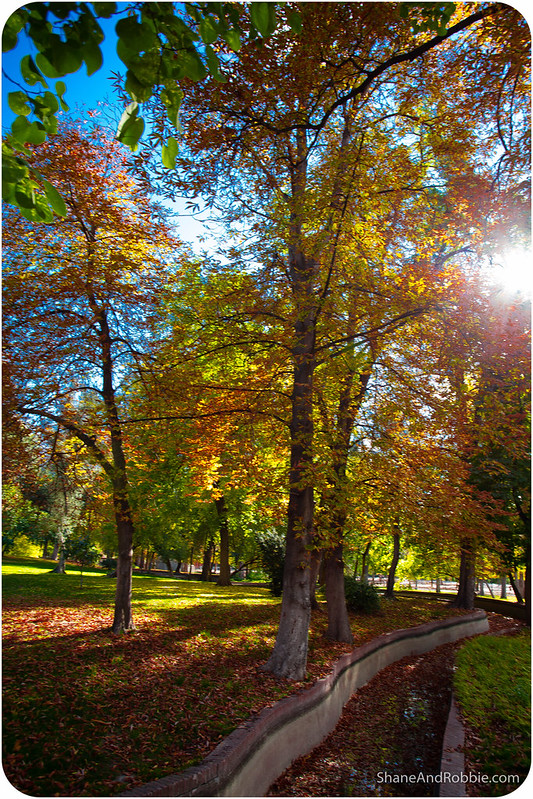 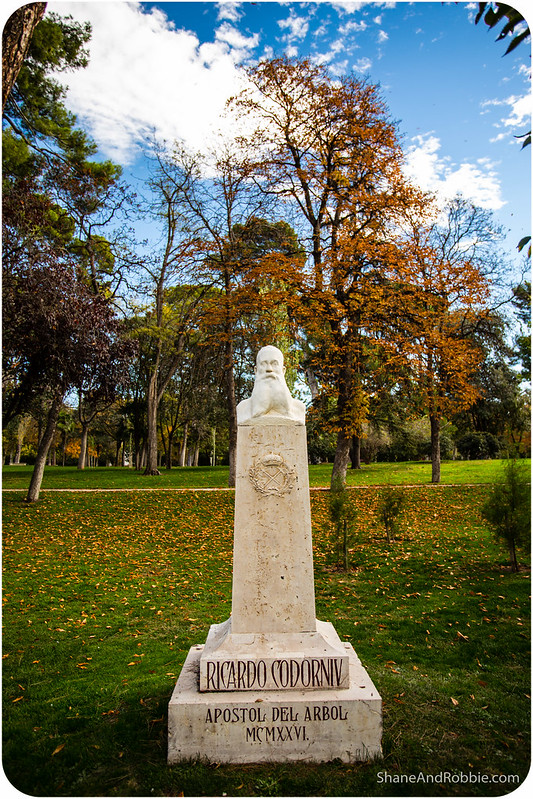 The park’s large rose garden was a colourful stop, with blooms of all colours braving the cold. Among the many rose bushes of all kinds stands the Fountain of the Fallen Angel, erected in 1922, which supposedly represents Lucifer falling from Heaven. 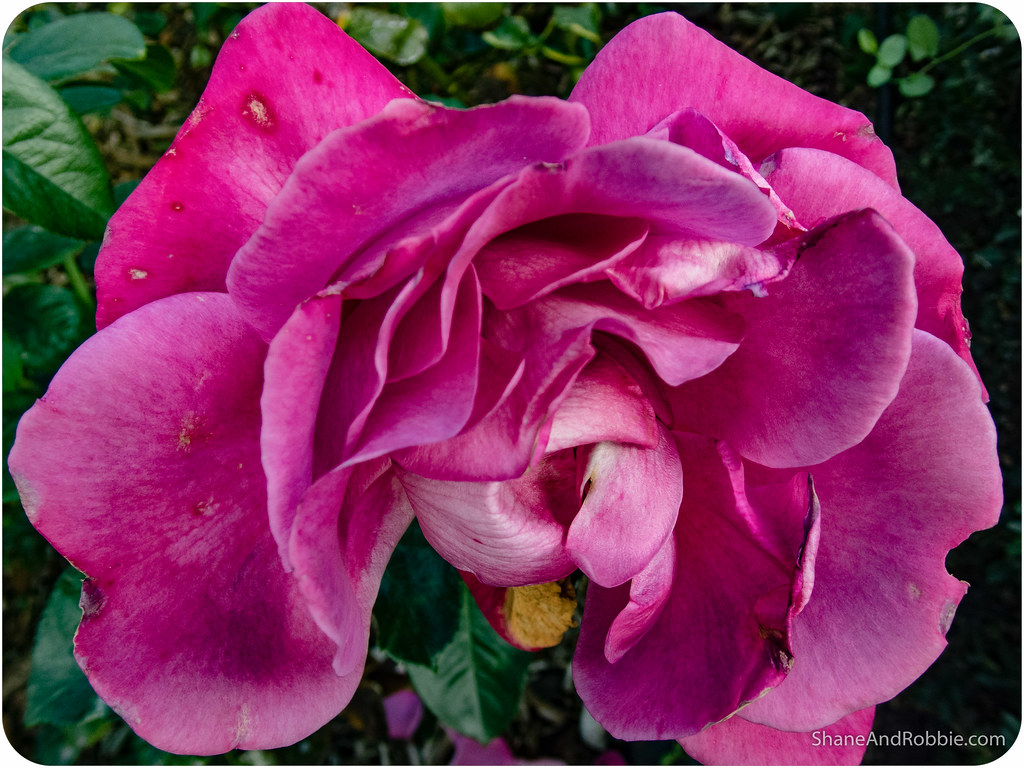 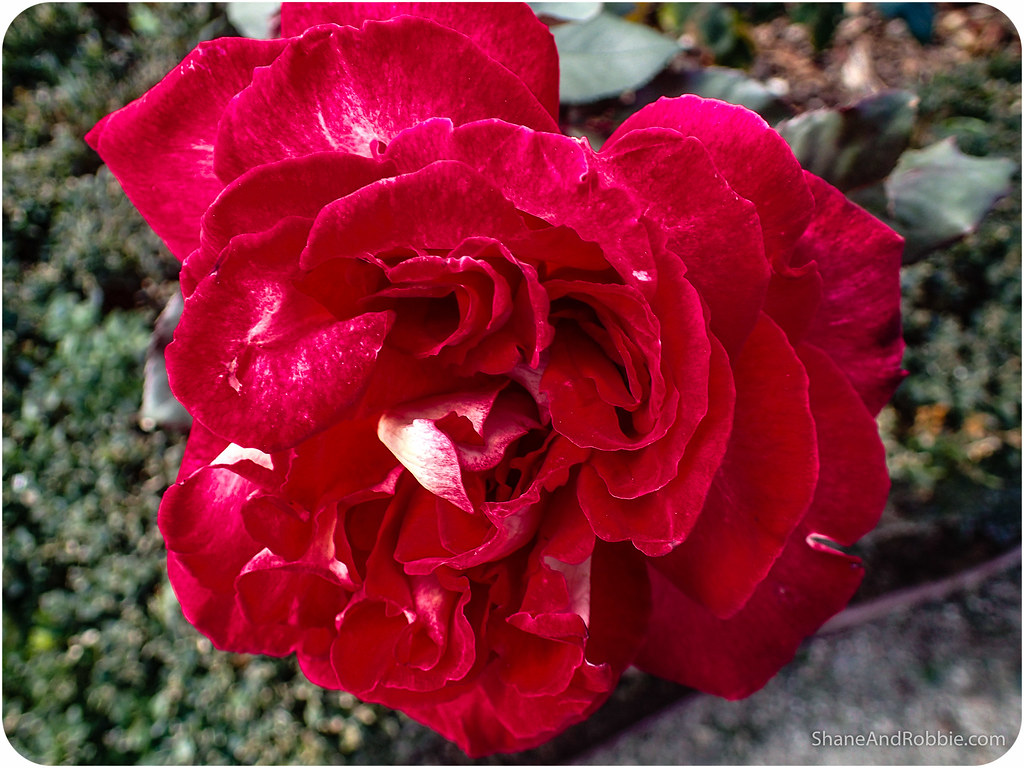 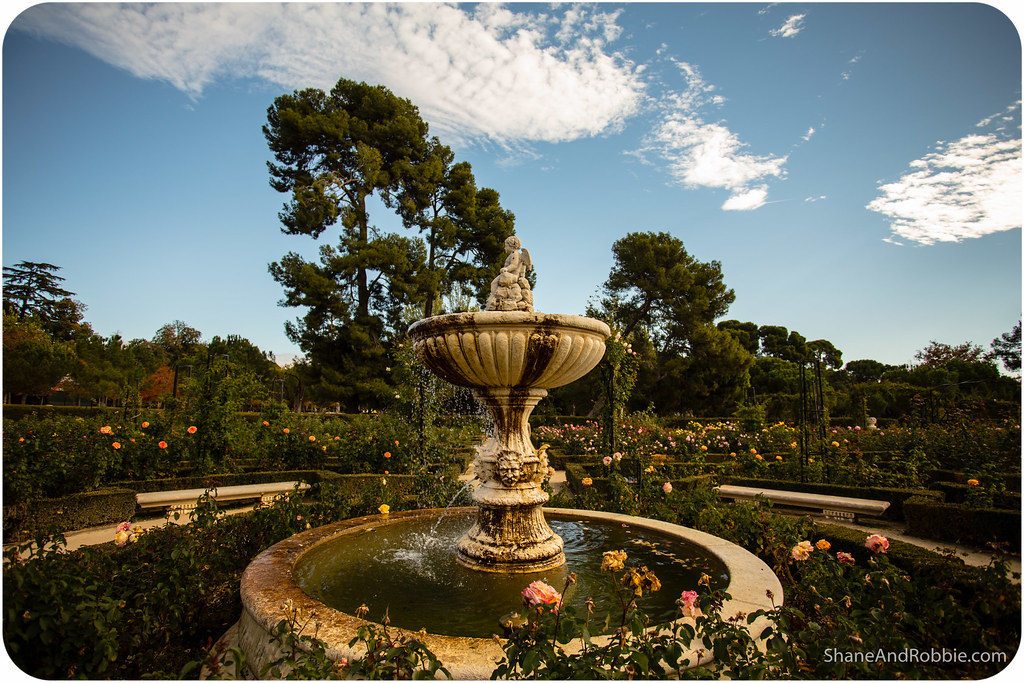 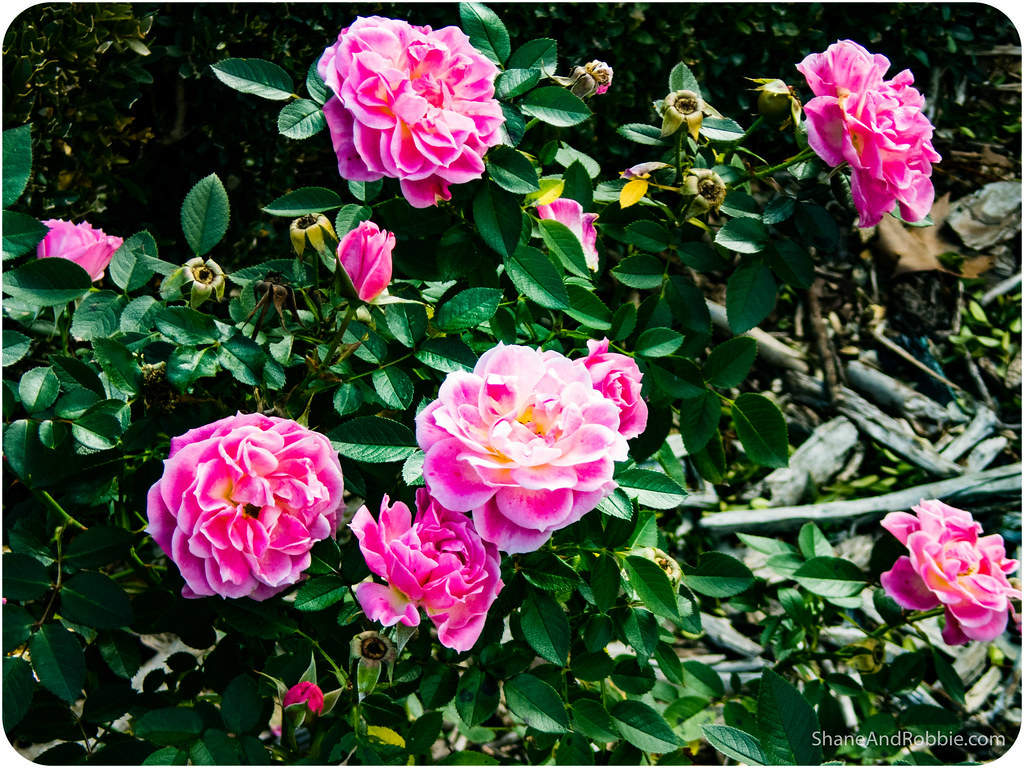 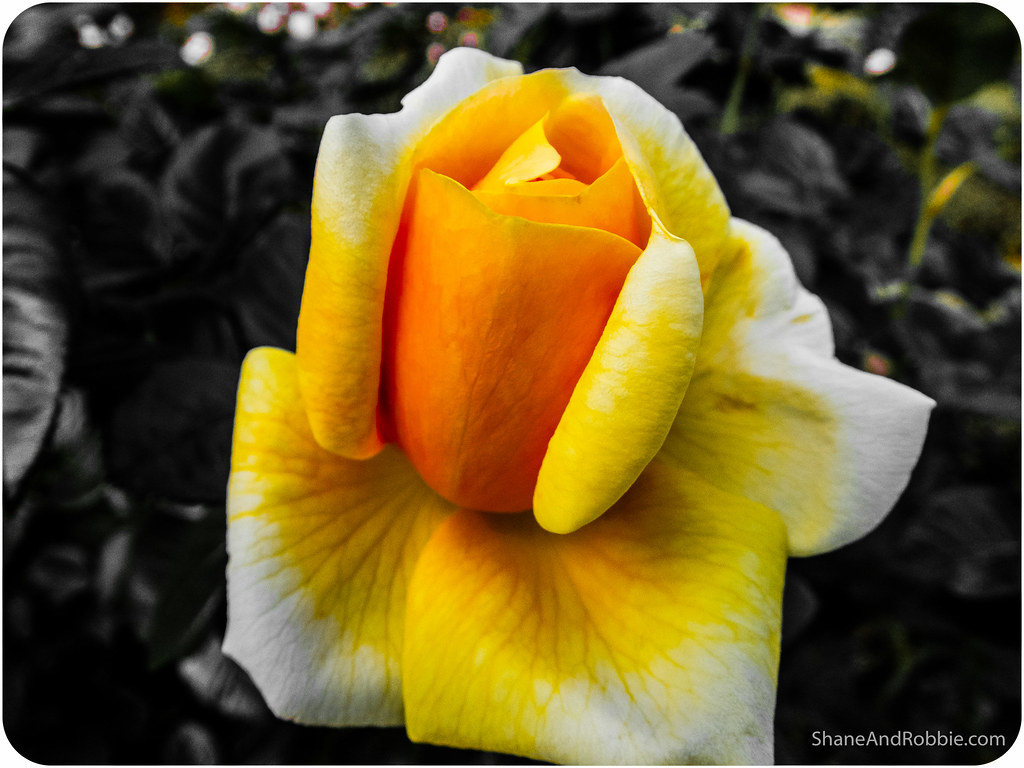 A few buildings remain form the park’s time as a royal retreat, including a huge green house which today houses art displays and museum collections. The current display consists of a series of dinosaur bones strung up on fishing lines. Not particularly photogenic or interesting really, who are we to judge?! 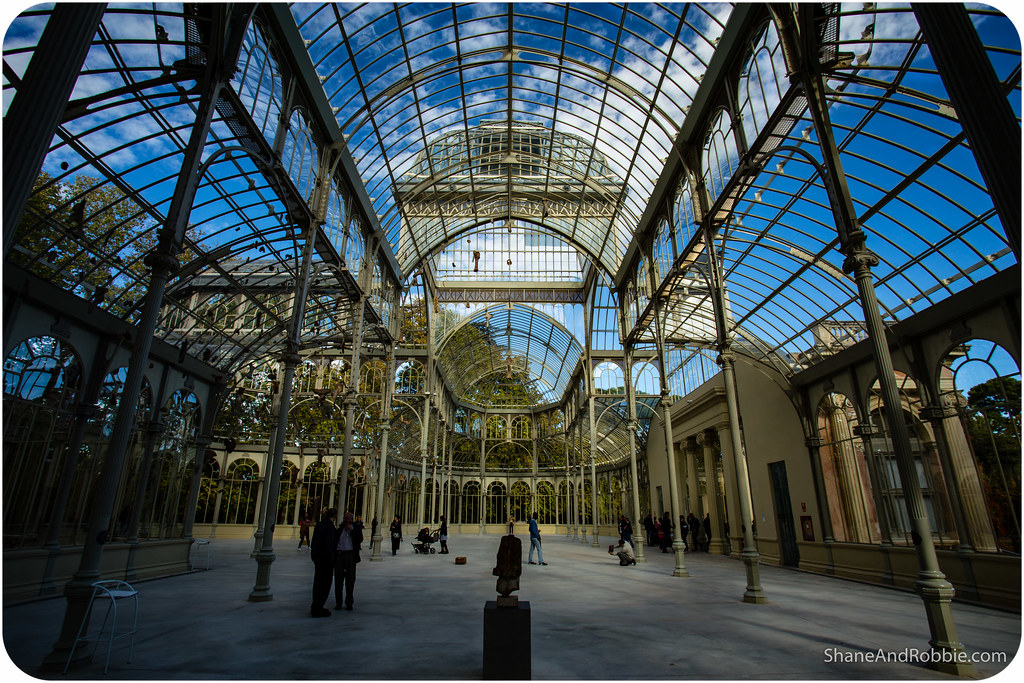 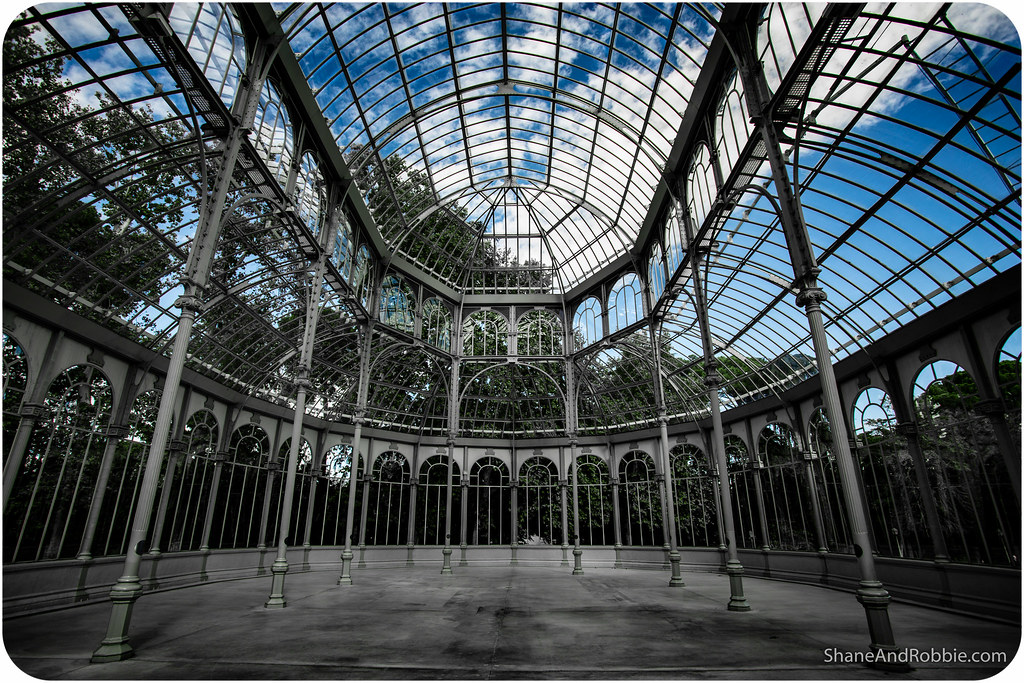 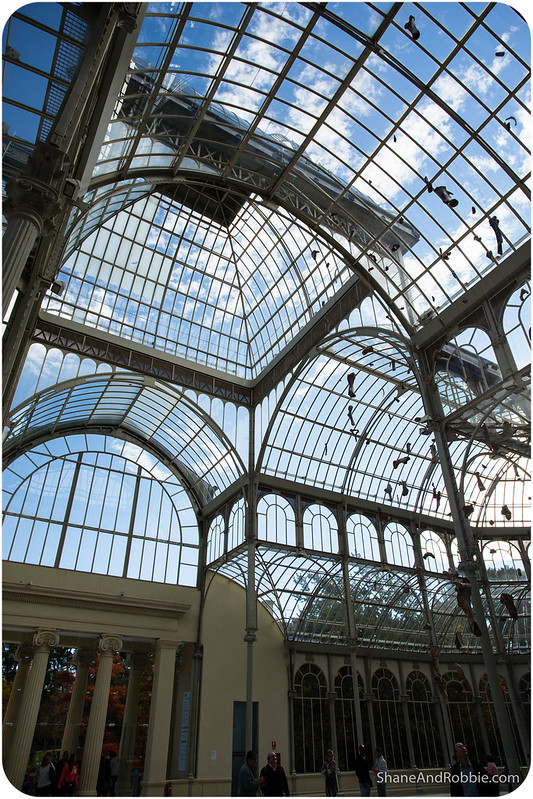 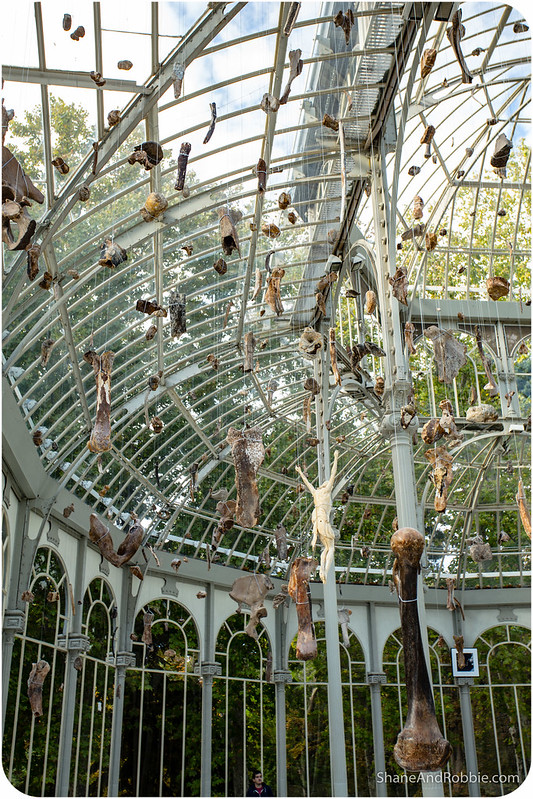 Close to the Northern entrance of the park we stopped for a coffee at the Estanque del Retiro, a large artificial pond populated with carp, ducks and swans. Here we were regaled by some buskers whilst enjoying our cortados, and basking in the sun. 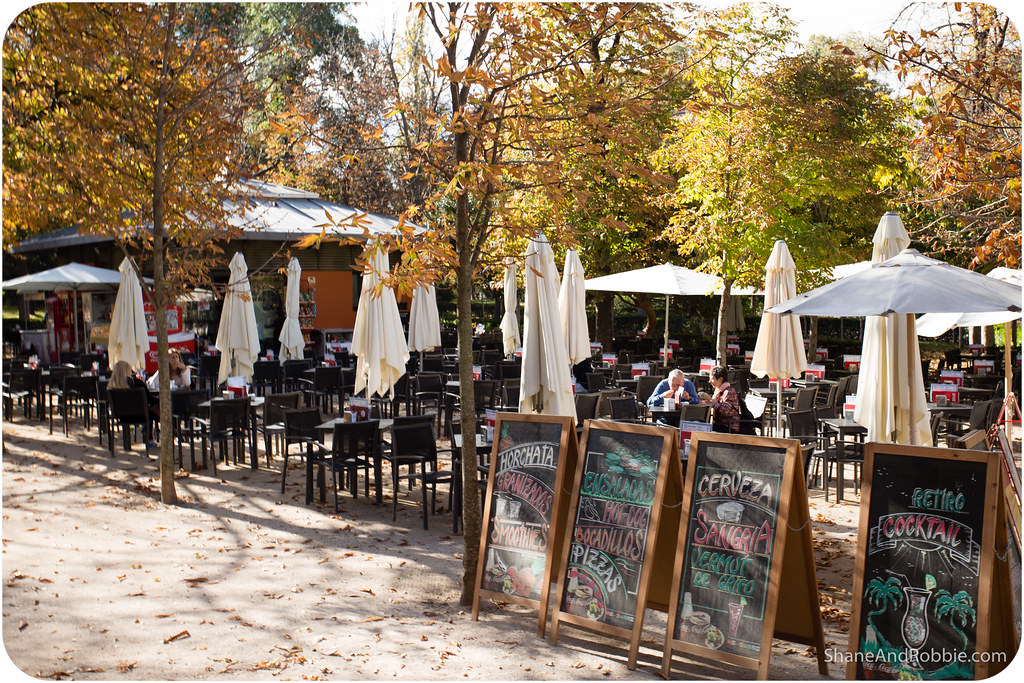 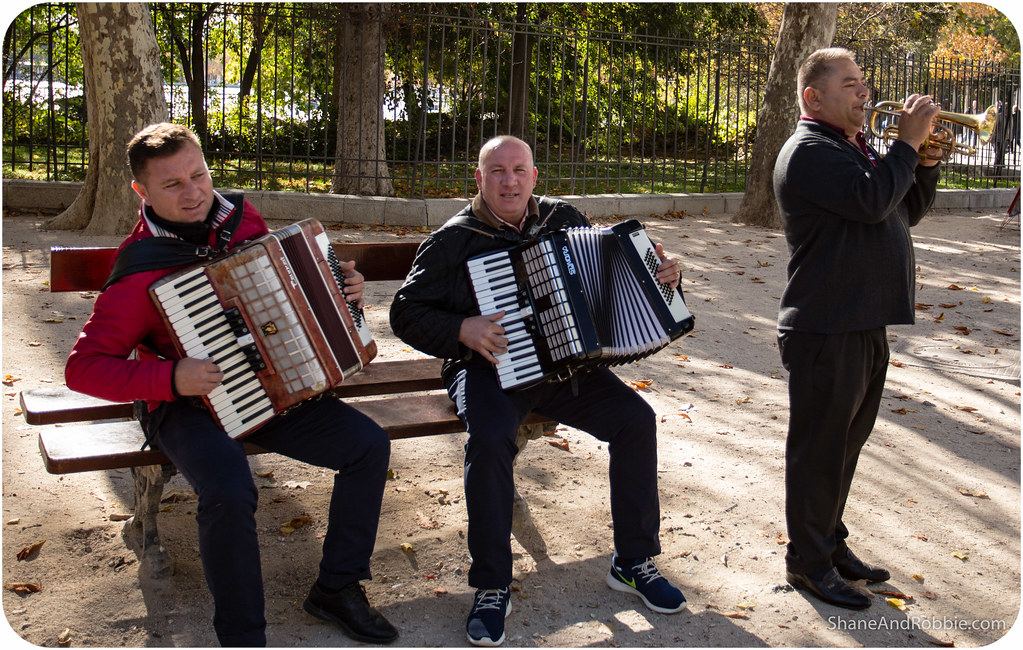 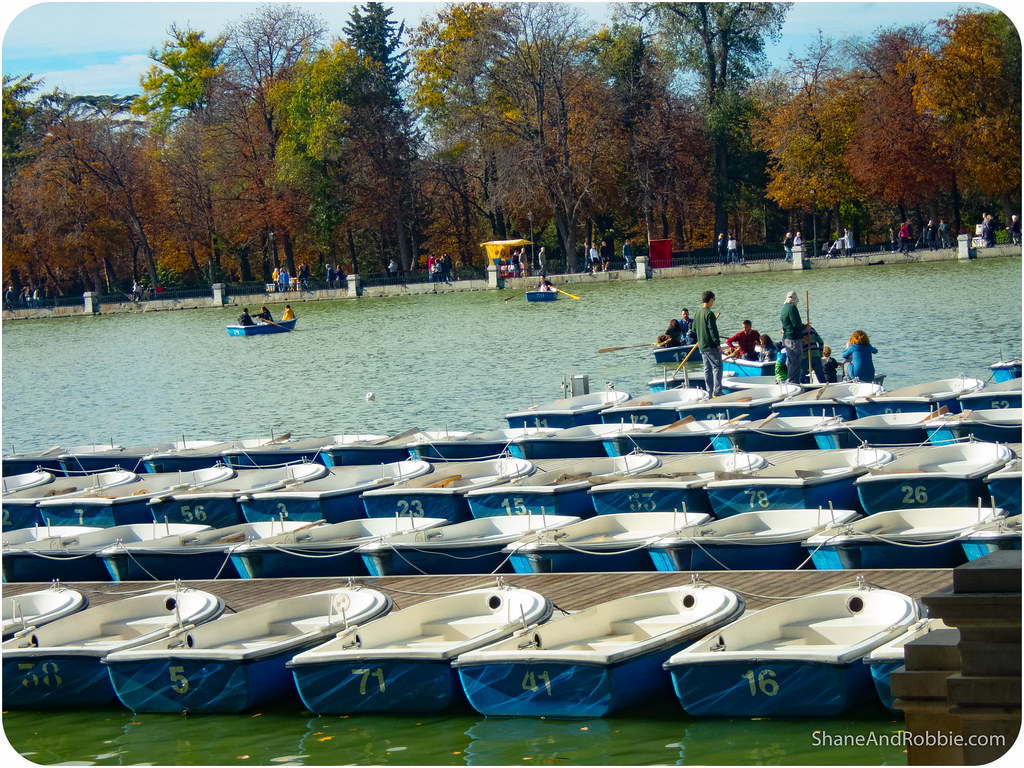 Next to the lake was a grand monument to King Alfonso XII, featuring a semicircular colonnade and an equestrian statue of the monarch on the top of a tall central core. All very picturesque. 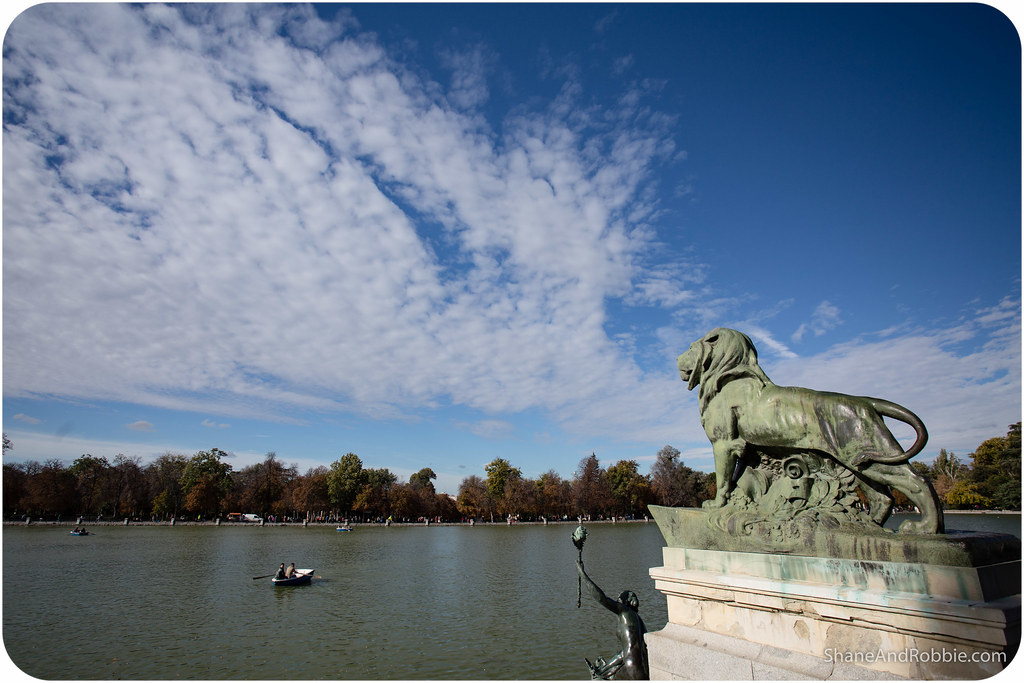 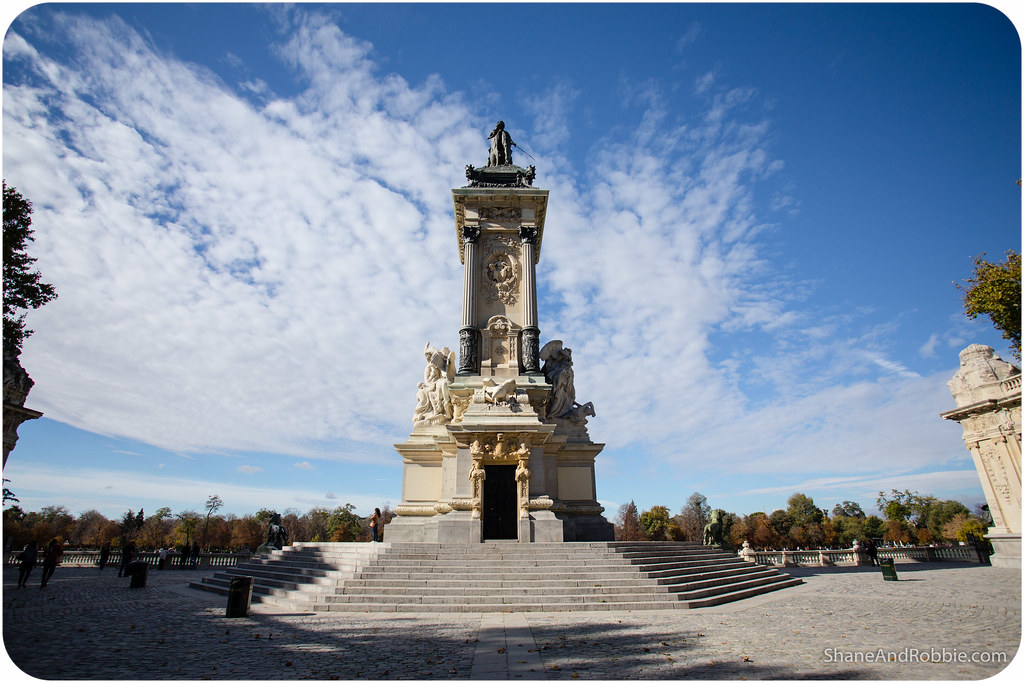 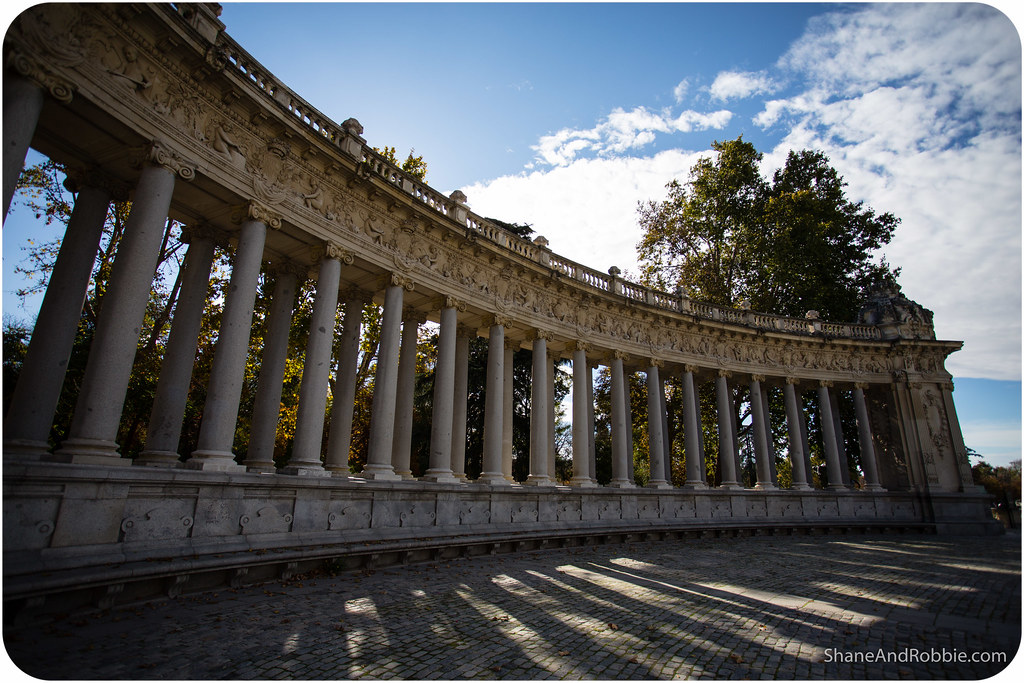 Near the Parque del Buen Retiro is Madrid’s “museum quarter”, where some of the finest art collections and museums in Spain sit. The foremost amongst these is the Museo del Prado. We’re partial to a good museum/art gallery and so spent the rest of our Sunday immersed in the world of art. 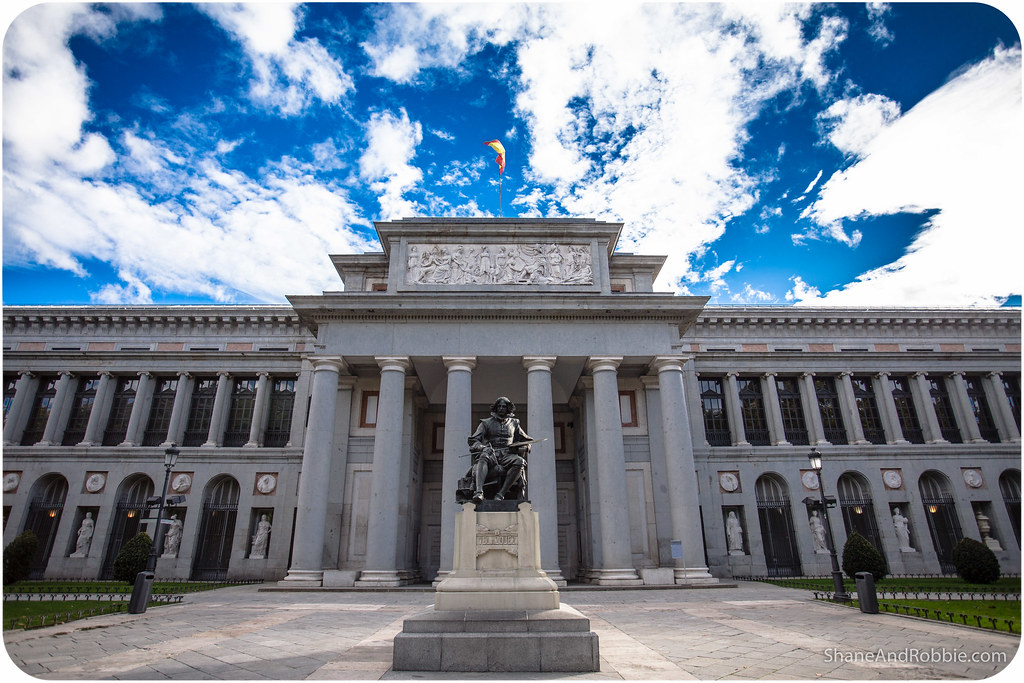 Museo del Prado features one of the world’s finest collections of European art dating from the 12th century to the early 19th century, especially Spanish art. It’s a huge museum, housing some 20,000 individual items; thankfully not all of these are on display – seeing the 1,300 that ARE on public display was enough for us for one day! For us the works of Francisco de Goya, Diego Velázquez, and Hieronymus Bosch were the highlights of the collection. They don’t allow photos inside the museum, but we’ve included some images of our favourite paintings below just to show you the kind of thing we saw today.

Goya’s paintings are renowned for their often grim tone and use of dark colours. Museo del Prado has an extensive collection of Goya’s work, including the 14 works collectively known as “The Black Paintings”. These dark paintings all portray intense, haunting themes, and were truly fascinating – especially “Saturn Devouring His Son”. This truly grotesque painting shows the mythological figure of Titan Cronus (i.e. Saturn), who, fearing that he would be overthrown by one of his children, ate each one upon their birth.

Not all of Goya’s paintings were quite this gruesome, however. “La Maja Vestida” (i.e. The Clothed Maja) and “La Maja Desnuda” (The Nude Maja), for example, are 2 of his most famous works and are far less likely to give you nightmares! These twinned works were painted around 1800 and the only difference between them is that in one the woman is fully clothed whilst in the other she is naked. No one truly knows who the lady in question was, but the most likely candidates are the then Duchess of Alba and Pepita Tudó (both of whom Goya was believed to know VERY well).

The other great Spanish artist whose works were very well represented in the museum was Velázquez. Known for his amazing use of colour, light, and lighting, Velázquez painted many portraits in his time and also produced “Las Meninas”, one of the most studied paintings in the world. It’s the complexity of this painting (that looks almost like a snapshot), and the unusual use of reflections that caught our interest.

Another of Velázquez’s works that we enjoyed admiring was “The Surrender of Breda”, a large canvas dating back to 1634 that captures the moment Dutch troops surrendered to the Spanish outside the walls of Breda (a Dutch town). The lighting and the humanity of the painting really drew us in.

Last, but most certainly not least, we loved “The Garden of Earthly Delights”. This crazy painting is not a Spanish artist’s work at all, but rather the product of Dutchman Hieronymus Bosch’s wild imagination. Dating back to 1490 this 3-panelled piece looks like the story of mankind’s fall from grace if you look from left to right. The left panel shows Adam and Eve relaxing in Eden, all happy and at peace; the central panel then shows humans and animals engaged in all sorts of debauchery (i.e. the world as it is maybe?!); finally, the right panel portrays all the torments of Hell. The fascination for us was just all the crazy detail in the painting!

http://flic.kr/p/ABx3aZ
Obviously we saw a LOT more than just these few paintings, but these few examples should suffice to show you how great Museo del Prado really is. Trying to fit the whole museum into one day was a bit much – like the Louvre in Paris or London’s great museums, Prado is perhaps best enjoyed in bite-sized portions, spread over 2-3 days. Still, what a great way to spend our Sunday afternoon! 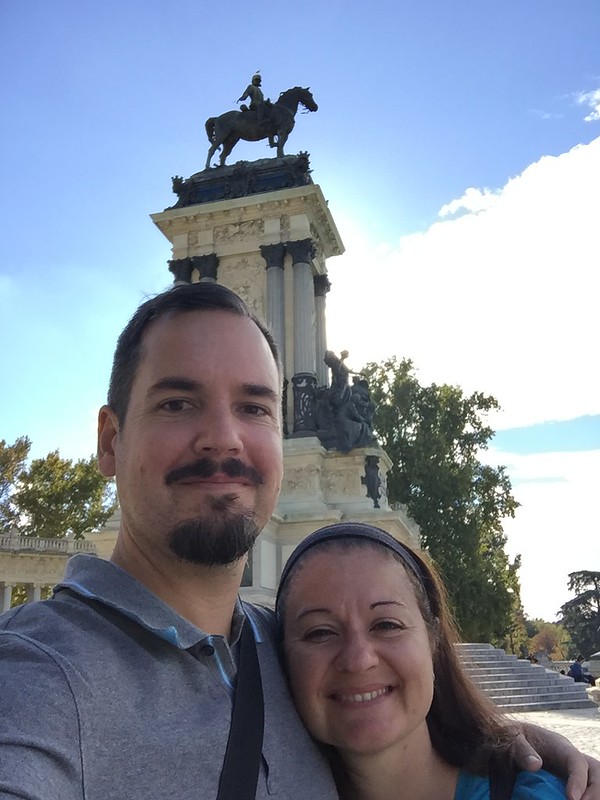