We’ve had another busy day here in Vietnam, with our morning spent cruising around Halong Bay some more, our afternoon driving back to Hanoi, and then our evening spent at the train station here in Hanoi waiting for our overnight train to Hue. We’re now sitting in our 4-berth cabin on the train, making our way 750km South to the small town of Hue, which served as Vietnam’s capital for about 150 years. The journey’s going to take about 12 hours and hopefully we’ll be able to get some sleep; given how rough the journey’s been so far, we’re not too hopeful! At least we had a good night’s sleep last night, on our cruise boat on Halong Bay.

Our boat remained moored all night, in a quiet bay surrounded by karst pinnacles. The sea was dead clam all night which made sleeping easy. We woke around 5:30am, just as the sun began to poke its head above the clouds. Sunrise was spectacular, especially as none of the boats had started their engines yet and it was silent and as well as calm. 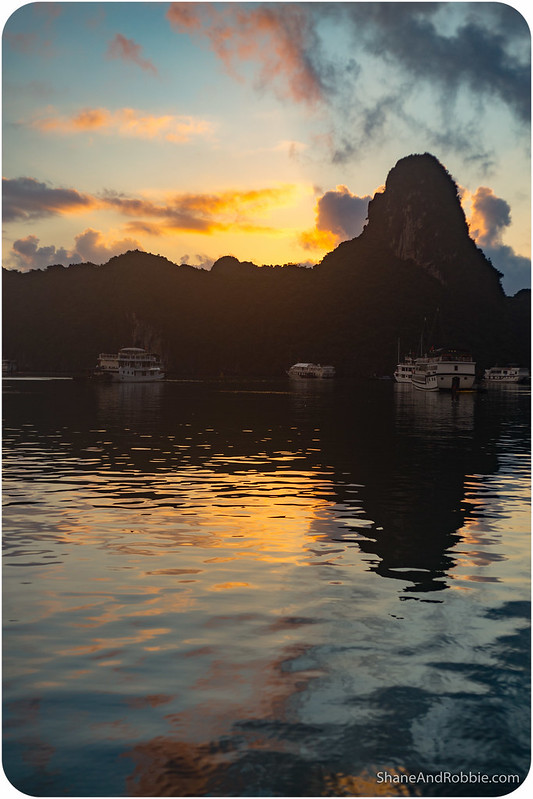 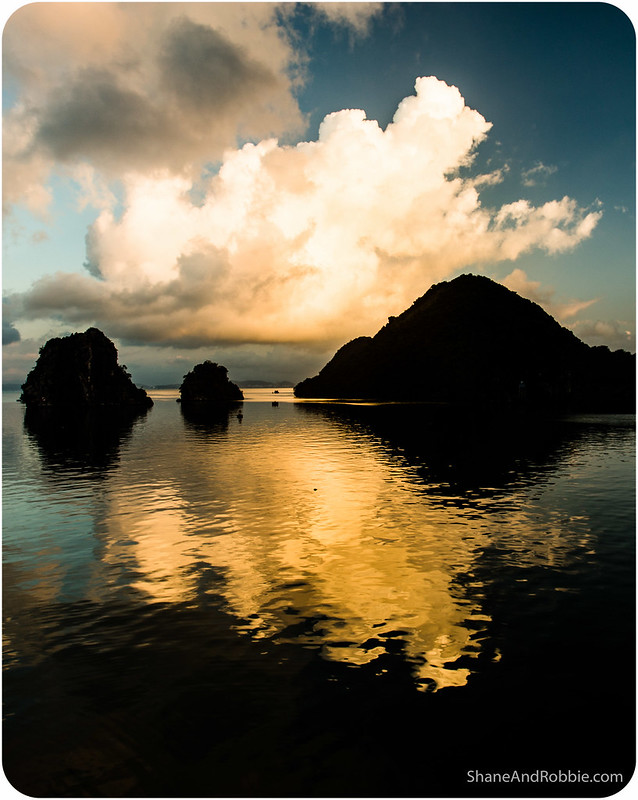 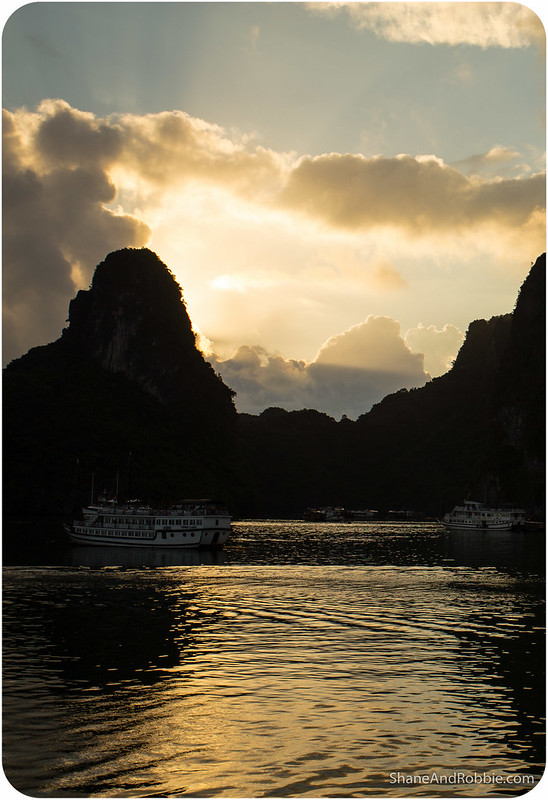 We stayed up on the top deck for a couple of hours, watching the sea eagles circling up above and enjoying the play of the light on the islets of Halong Bay. Breakfast was served up at around 7:30am and then we set off again to cruise around the bay for another few hours. 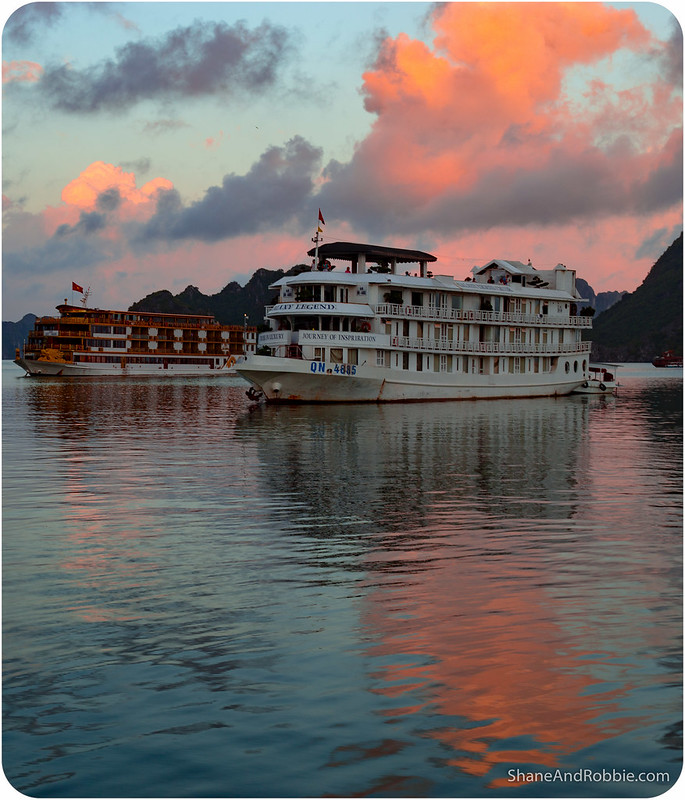 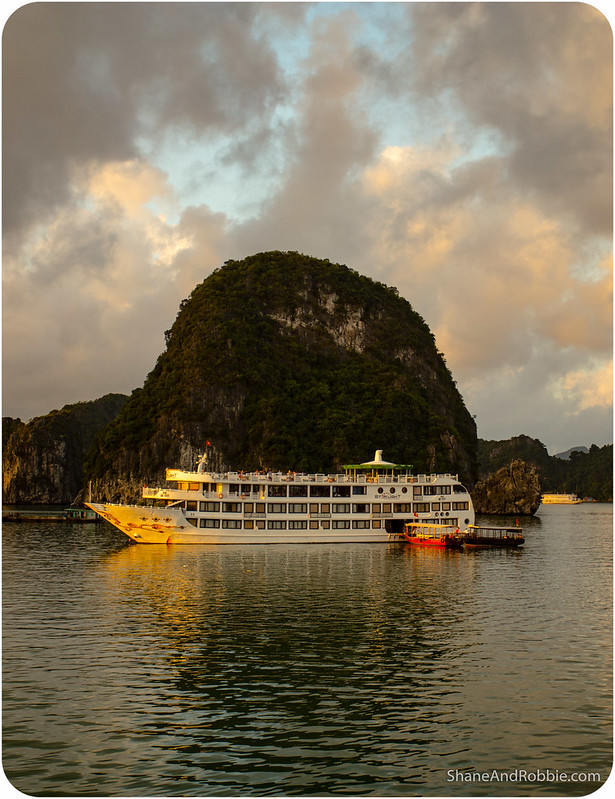 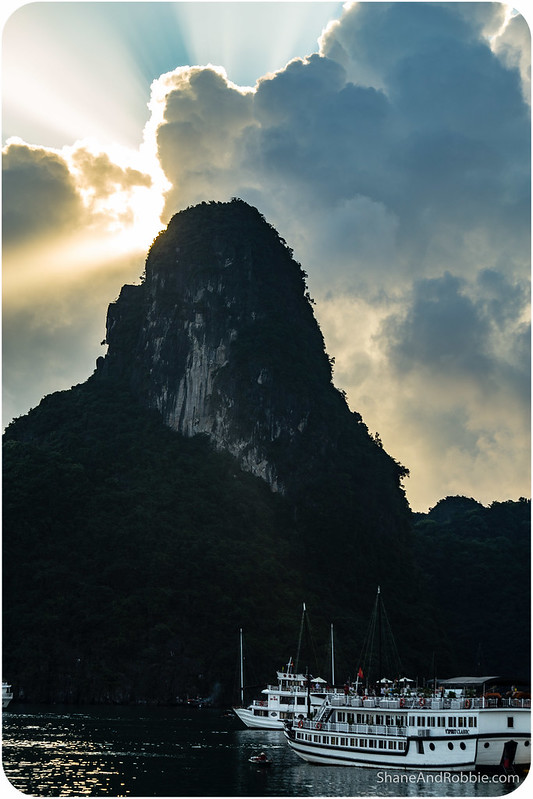 Being a short 1 night cruise, our trip didn’t go very far out into the bay and we only saw a handful of the 2,000 or so limestone islets that are spread across the 1,500km2 of Halong Bay. 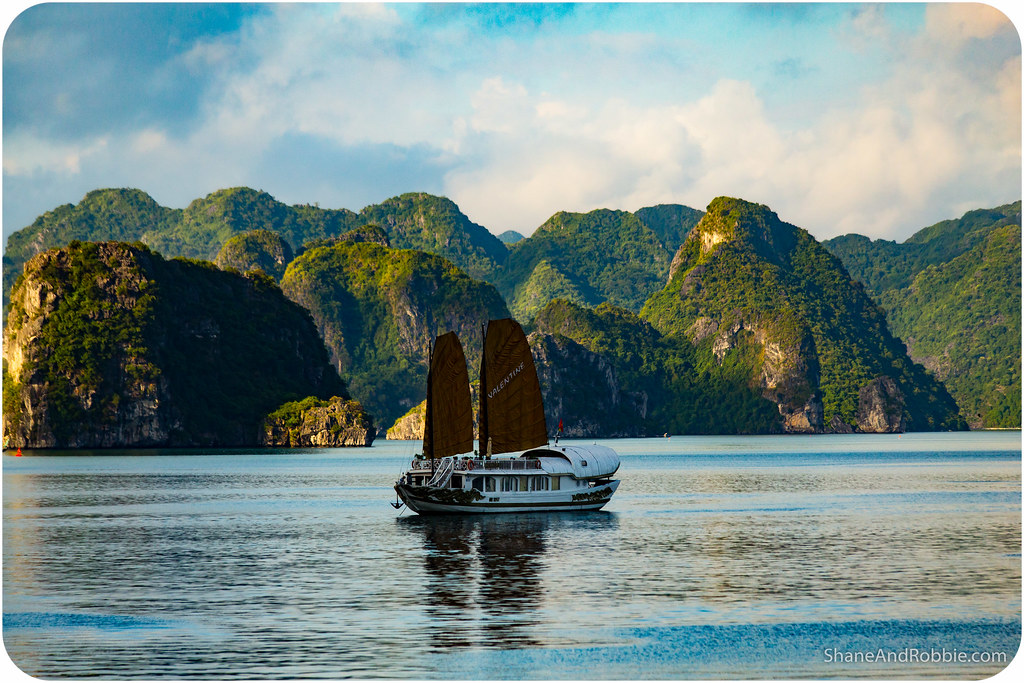 The limestone pillars in this bay are the remnants of an ancient sea bed which has been eroded away by the wind, rain, and sea water over the past 500 million years. Densely forested on the surface, many of these islands are actually hollow with enormous interior caves. 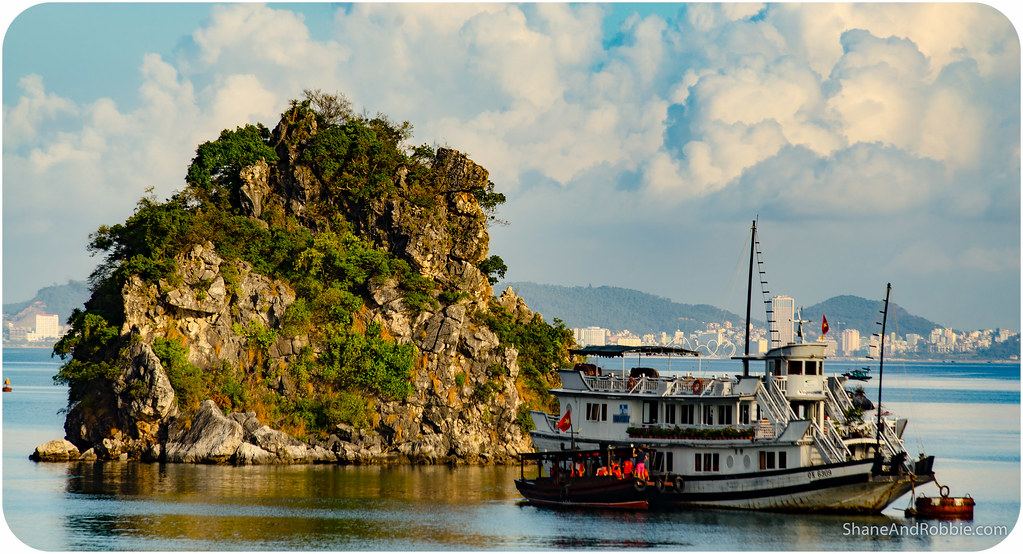 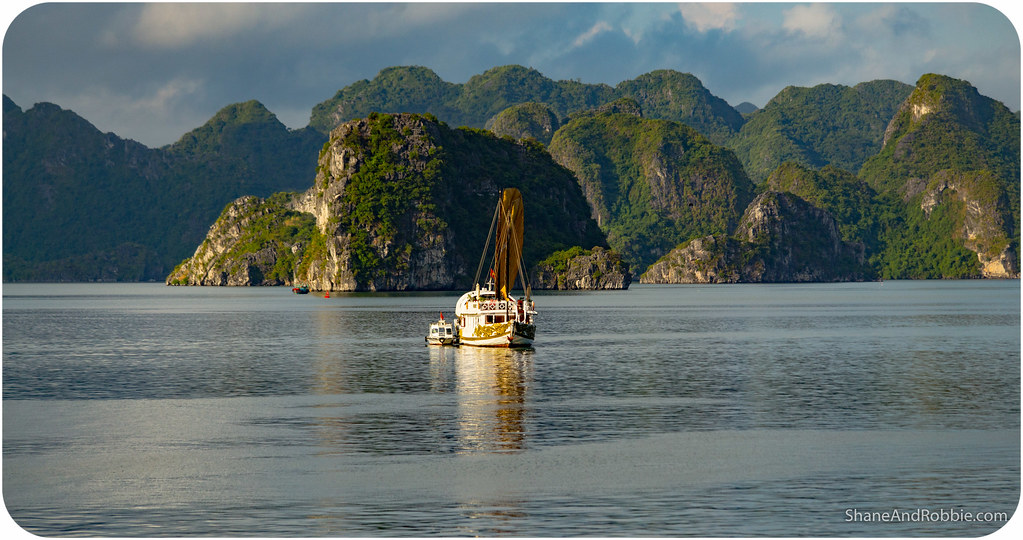 There are two bigger islands have permanent inhabitants and one of them even has a couple of big hotels built on it. A few of the smaller islets we saw were fringed by small beaches, and apparently many of the islands are home to wide range of wildlife, including an endangered species of monkey found no where else in the world. 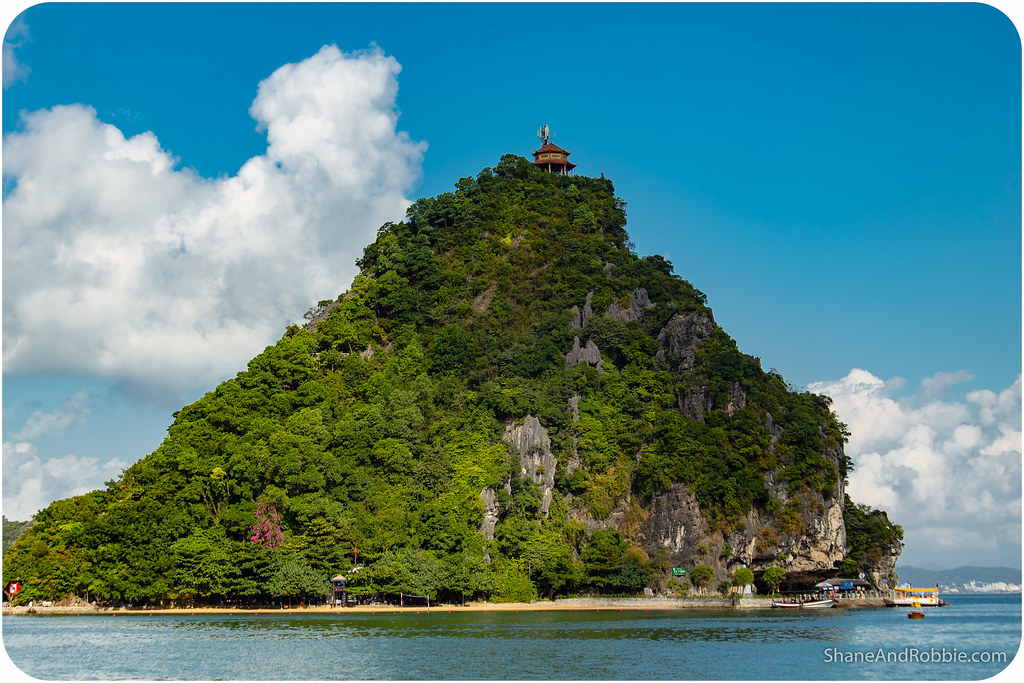 During our cruising we also passed a couple of floating villages, populated by fishermen and their families. A community of around 1,600 people live on Halong Bay, making a living by plying the shallow waters for fish, crustaceans, and molluscs. 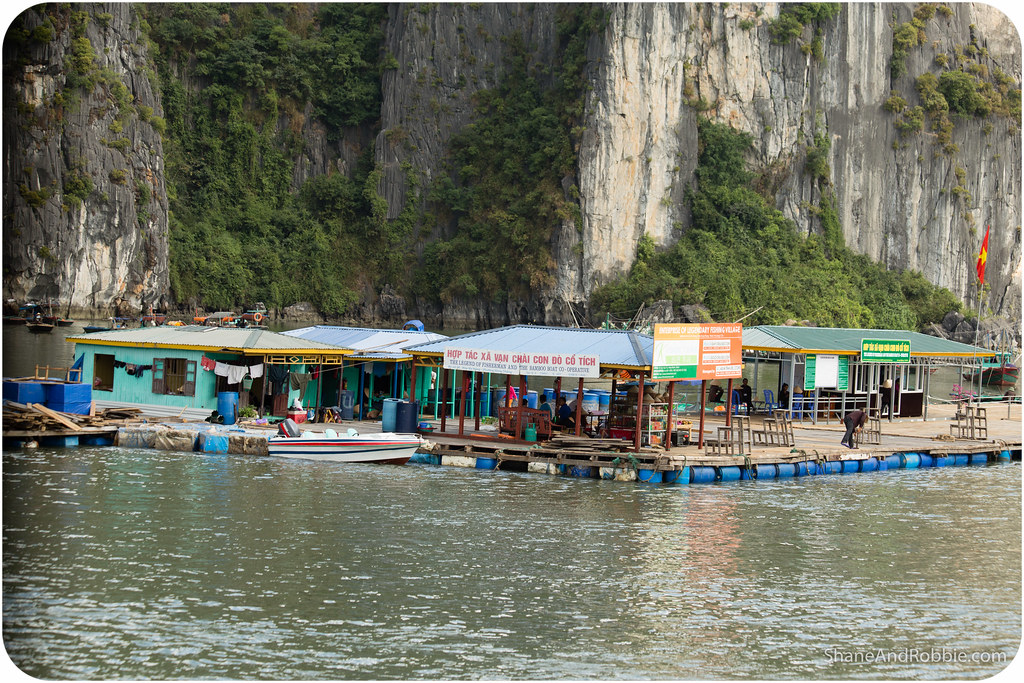 Our cruise wrapped up around midday, at which point we docked back in Halong township and hopped back on the bus for Hanoi. We didn’t realise when we booked it, but the 2 day/1 night cruise is really just 24 hours long and in all honesty is just not long enough. With hindsight we can see that the 3 day/2 night option would have been better – the longer cruise takes you out further, away from all the other tourist boats (most of which just do the overnight cruise), and further into the splendid karst scenery. It was still great to see Halong Bay, but next time we want to spend longer out here and see more of it! 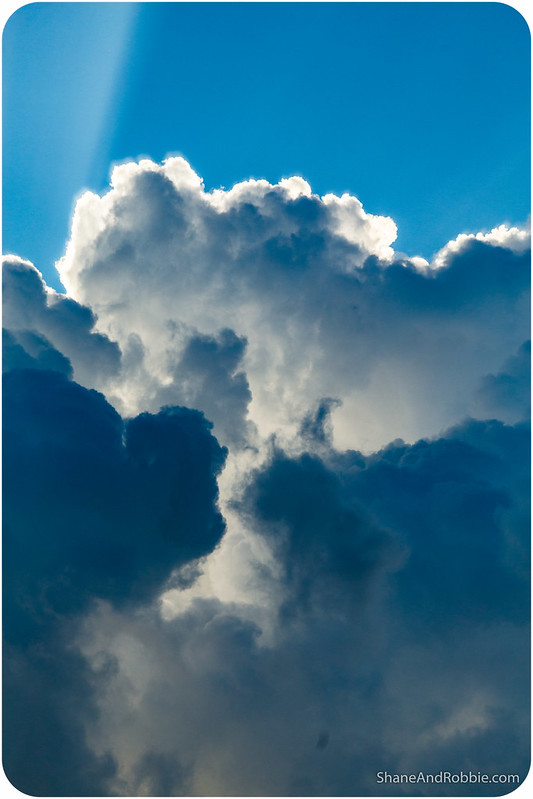 The drive back to Hanoi was uneventful and retraced the route we took yesterday. Along the way we saw more snippets of Vietnamese life zipping past our window. One of the things we’ve already noticed is how hard people work here in Vietnam. People are up early, are always busy, and seem to be very industrious. Lots of people run their own micro-businesses too – seems to be all you need is a bit of pavement and something to sell and you’re in business! 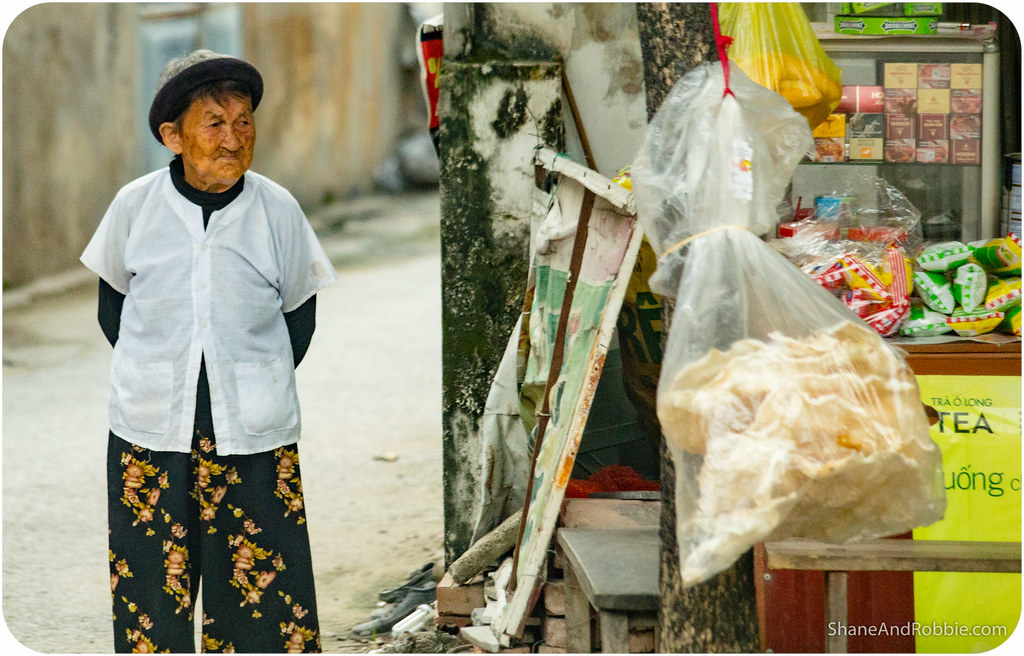 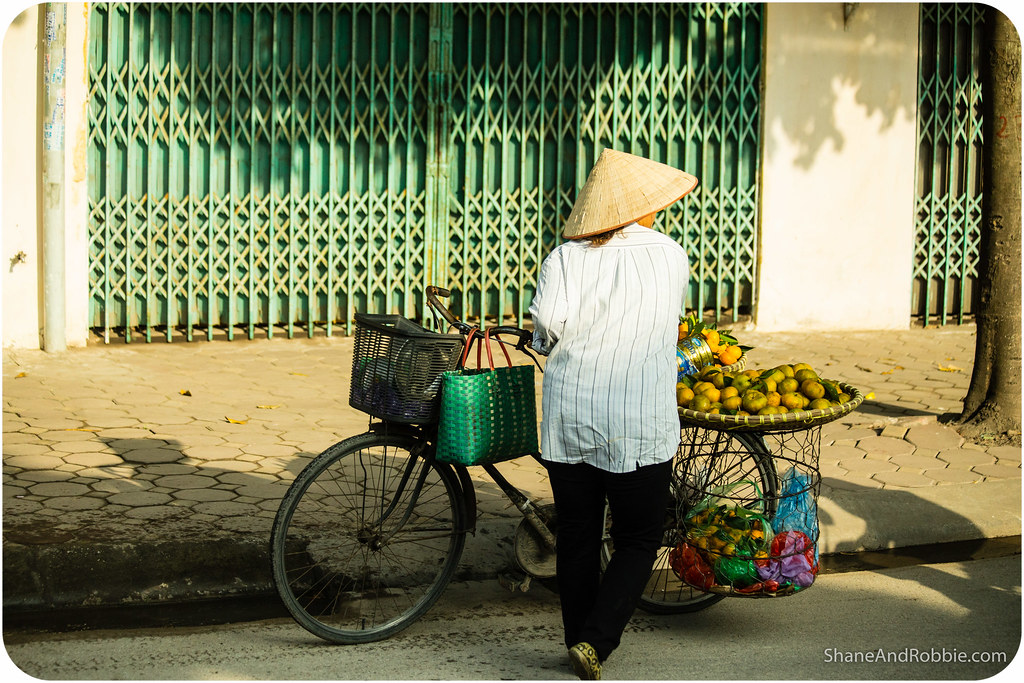 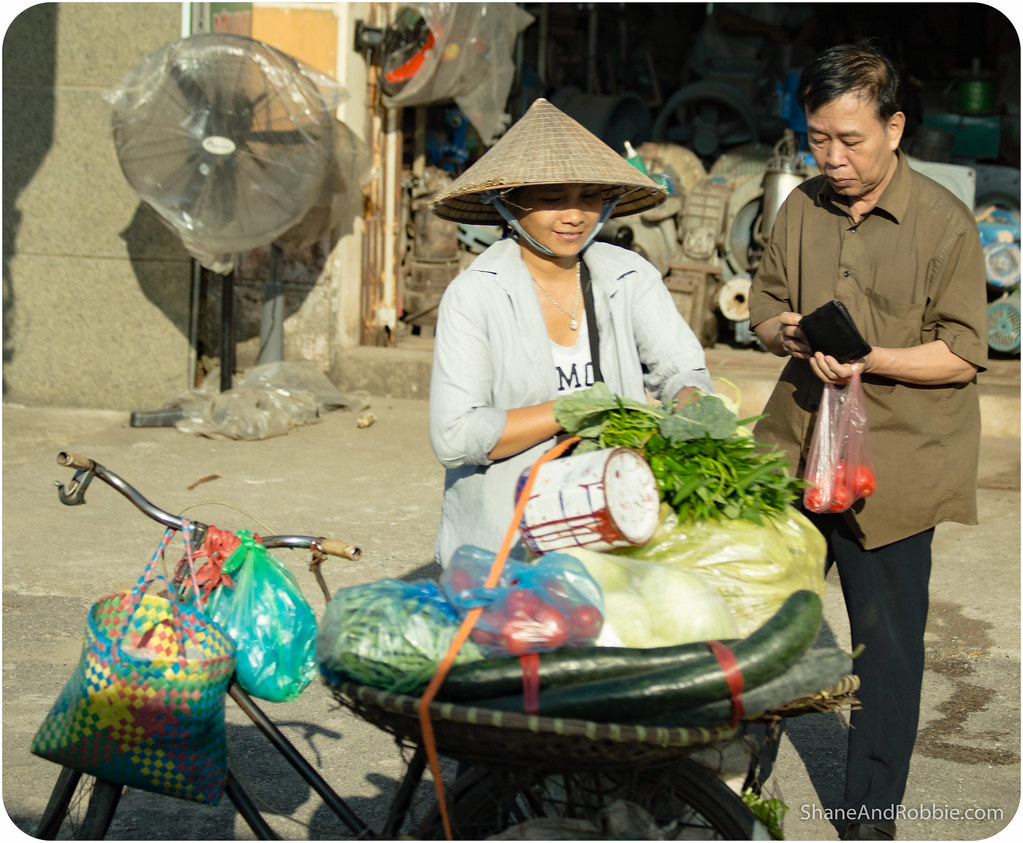 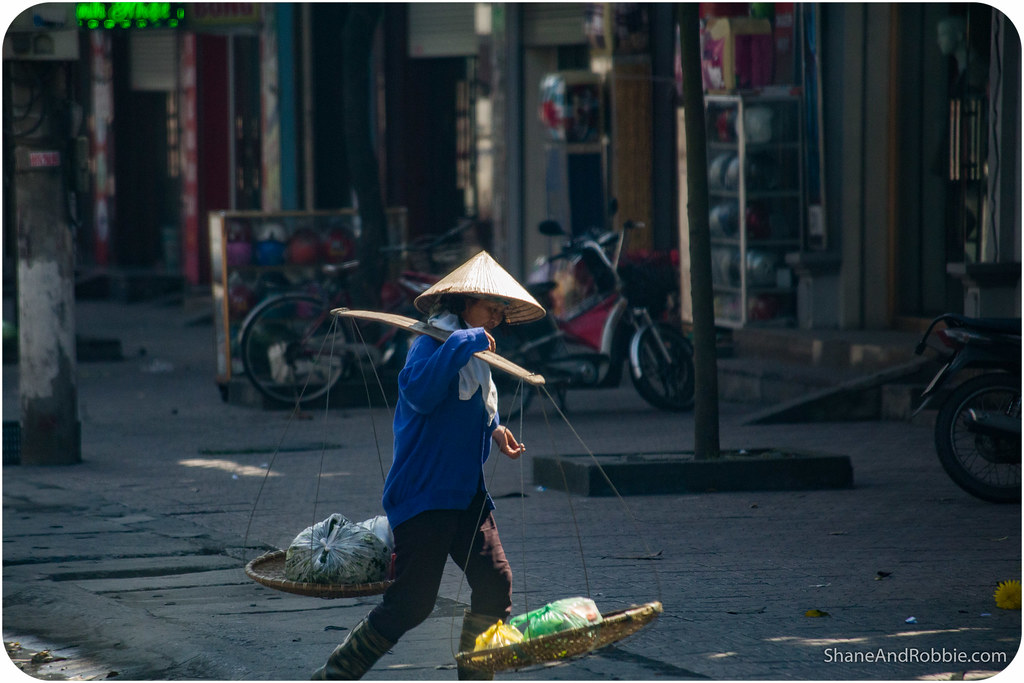 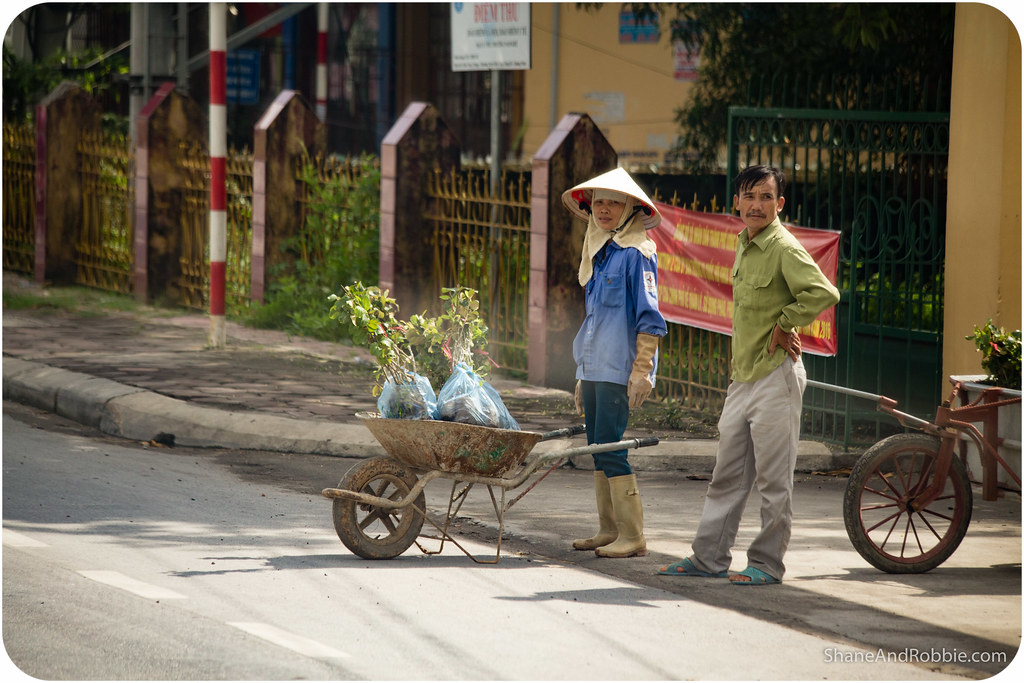 Talking to our local Vietnamese guide we learned that this industriousness is born of need; life here in Vietnam is quite tough with many people still living close to the poverty line. Ostensibly Socialist, it seems the government does little to support the people of Vietnam with infrastructure being fairly limited and services like education and healthcare only available for those that can afford it. There isn’t any old age pension or support for people with disabilities, everything falls to the family. As in many developing countries, corruption is rampant, and it takes “a little something” to ensure even the simplest of things (e.g. medical appointments, connection of utility services, etc) go to plan. Interestingly there are pro-government propaganda posters up all over the place here, touting the good work done by the Vietnamese Communist Party. 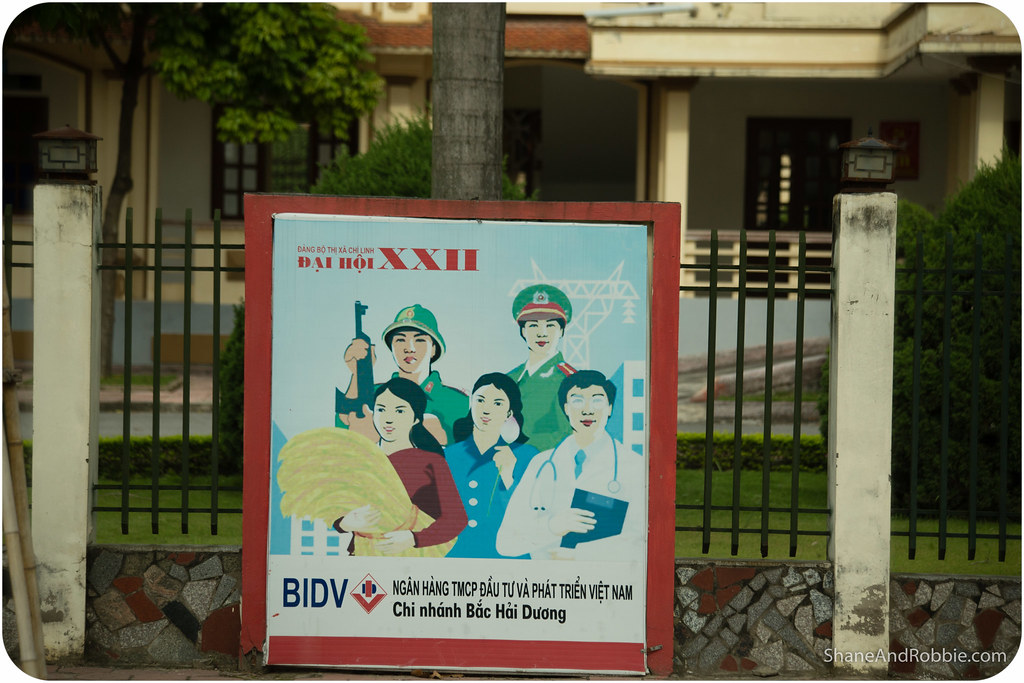 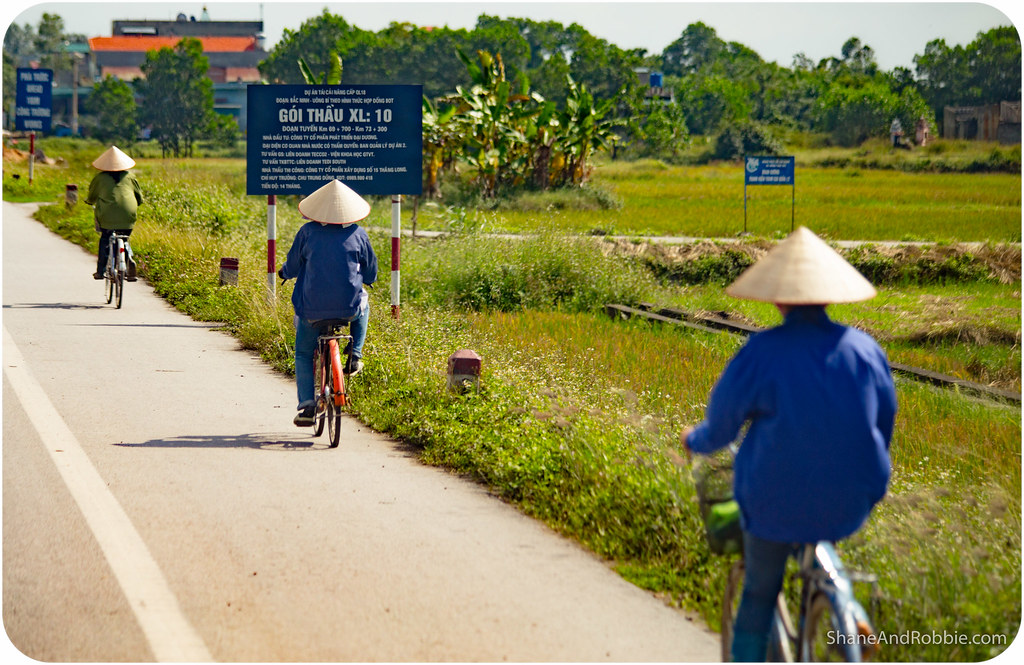 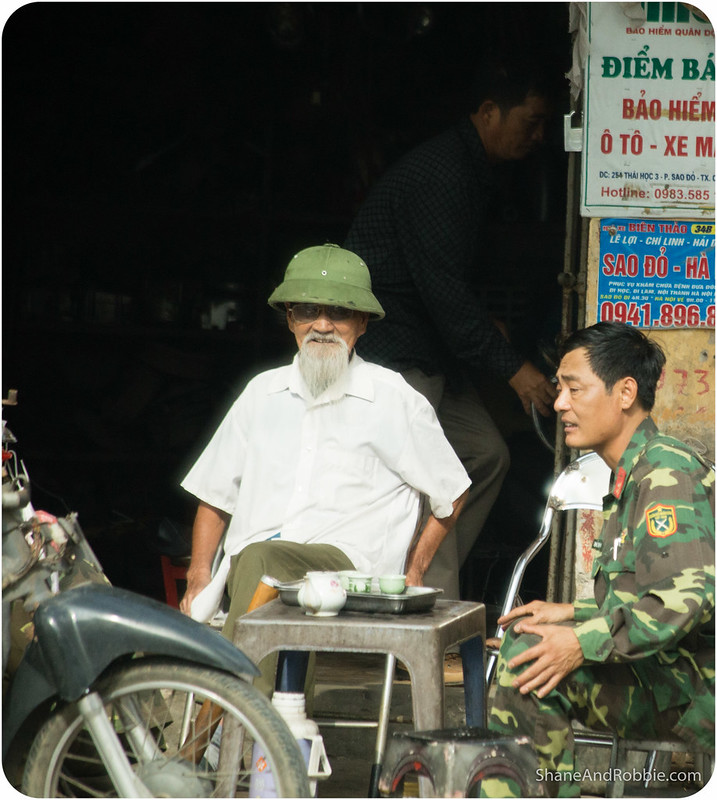 Vietnam is still a highly agrarian society with 80% of the population living in rural villages scattered throughout the lowlands, mountainous areas, and the coastal regions. The countryside we passed on the way back to Hanoi was a beautiful patchworks of green paddies, worked by hard-working farmers in their conical hats*. We saw quite a few water buffaloes out in the fields too, helping with the ploughing and valued for their milk and meat.

*Typical of South East Asia these woven conical hats are known as nonla hats here in Vietnam and make perfect sense when you realise how hot the sun can be here. 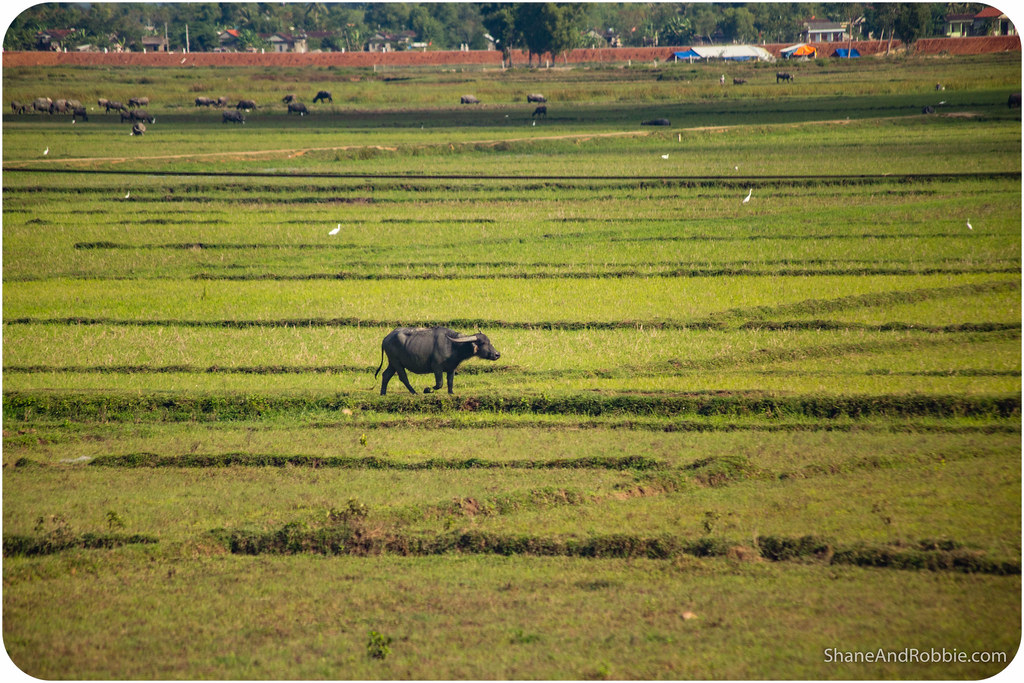 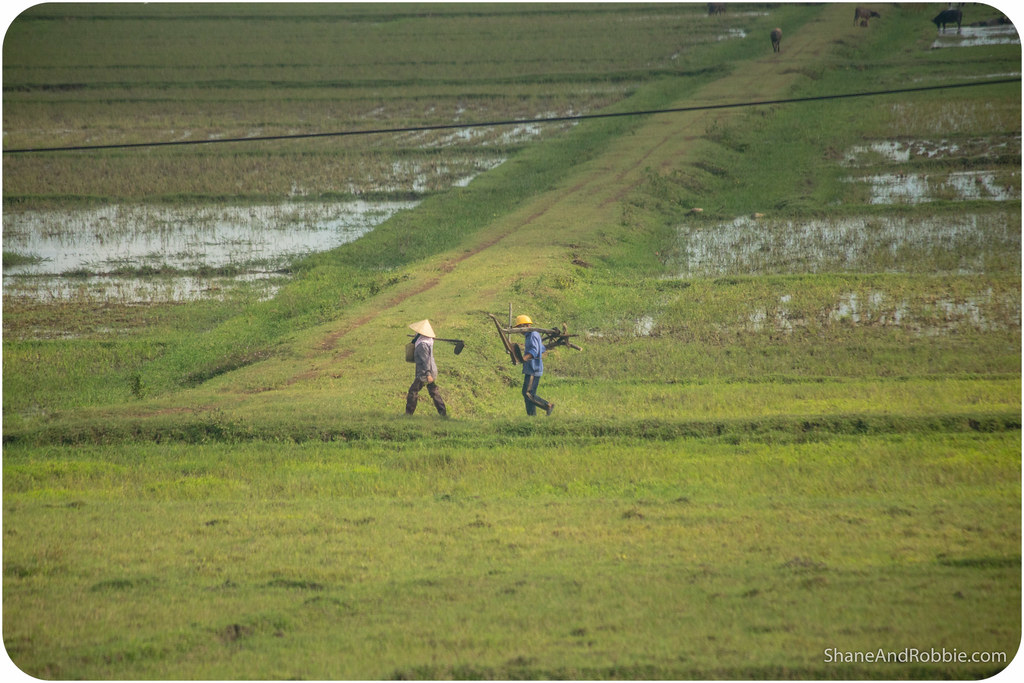 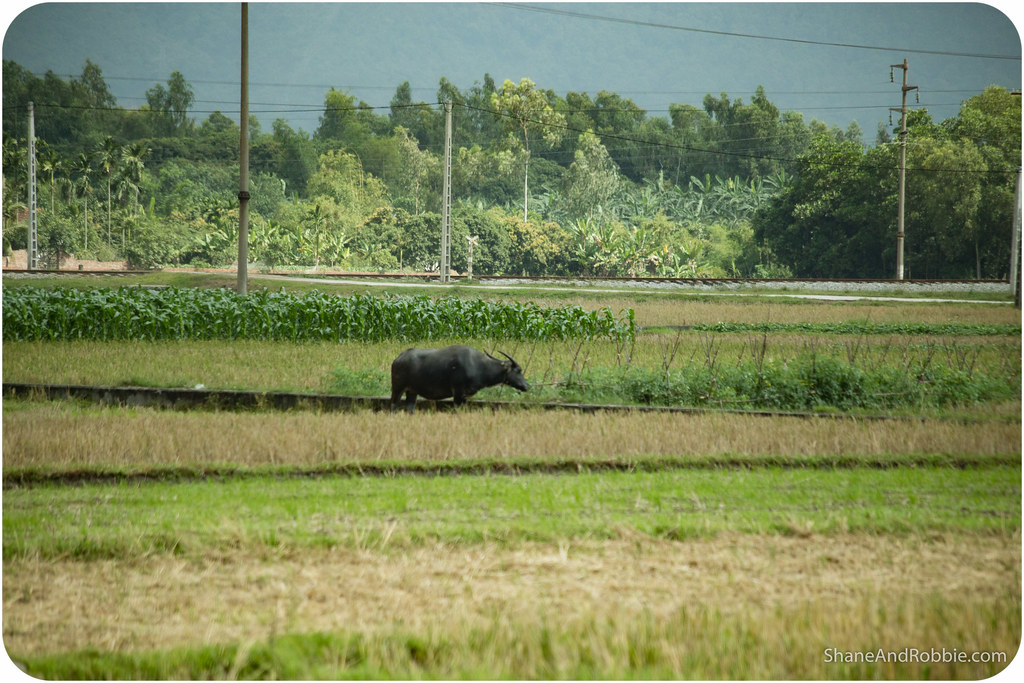 For those that live in big cities like Hanoi life is chaotic and busy, with urban costs of living significantly higher than in the country. In the cities the added challenges of traffic congestion and pollution combine to make life even harder for the Vietnamese. Certainly life in Hanoi must be quite stressful – we struggled just to cross the street there. The number of motorbikes whizzing past made every street crossing an adventure! 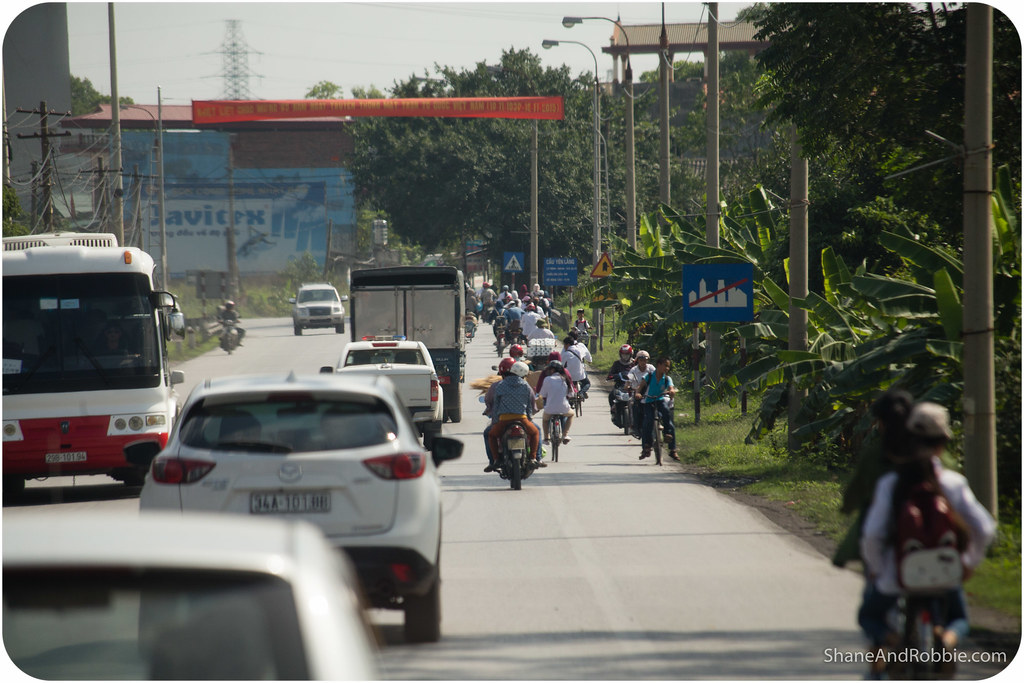 For now we’ve left Hanoi behind however, and are settling in for our night on the train. The train itself isn’t quite as nice as the overnight train we caught from Bangkok to Chiang Mai in Thailand; it’s dirtier and obviously older. This train originated in Hanoi however so at least the bedding was clean, though the blanket was very stained, the walls grubby, and the floor dirty. We’re also sharing our 4 berth carriage with at least 1 cockroach (and a lovely couple from Aus). At least the toilet at the end of the carriage is passable – as long as you have your own loo paper! It’s all part of the adventure right?! 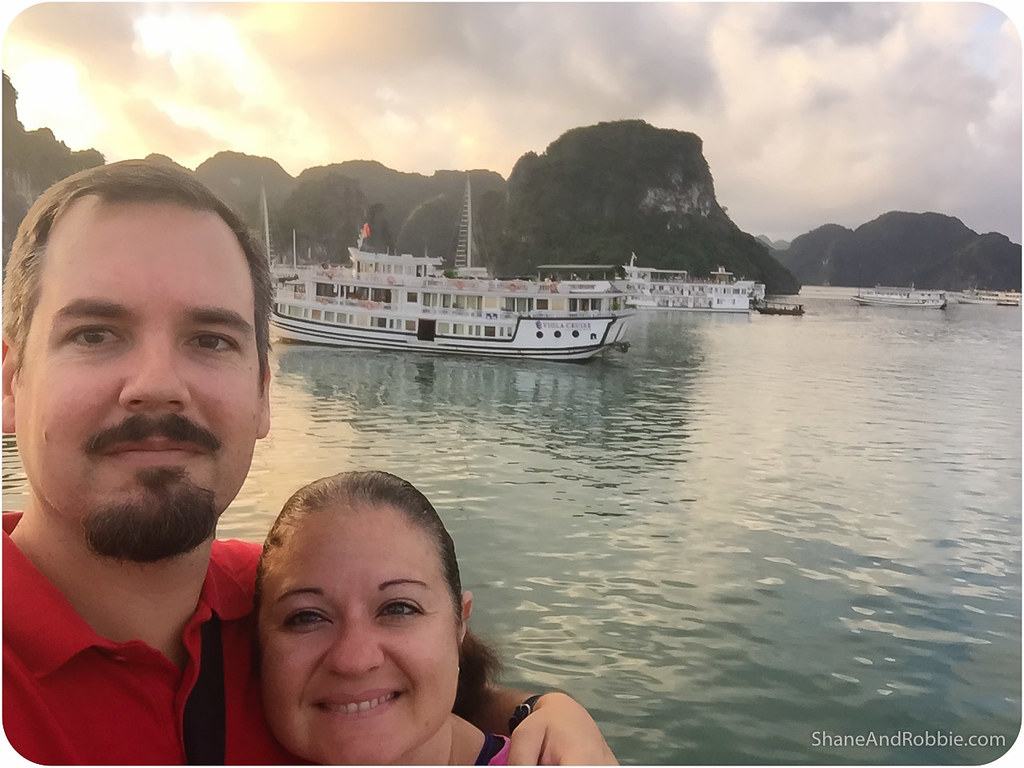