In Vietnamese the Mekong River delta is known as the Nine Dragons delta, due to the nine branches the mighty Mekong splits into as it empties into the sea. This vast wetland region is in the far South-Eastern corner of Vietnam and is one of the country’s 2 main “rice bowls” (the other being the delta of the Red River which flows through Hanoi and empties into the South China Sea). Once part of the Khmer Kingdom (the forerunner to modern-day Cambodia, of Angkor Wat fame), the lands of the Mekong Delta are comprised of low lying rice paddies, swampy islets, and canals bordered by dense mangroves and palms. It’s a unique environment and one of Vietnam’s iconic sights, which is why we wanted to spend at least a day there!

Beginning way up in the mountainous regions of China and Tibet, the mighty Mekong River flows for some 4,500km through the heart of Southeast Asia, until it drains out into the sea at the Mekong Delta. It’s the life-line of 6 countries (Cambodia, Myanmar, Laos, Vietnam, Thailand, and China), and along its length passes through temple cities, lush tropical forests, swamps, and rice plantations. 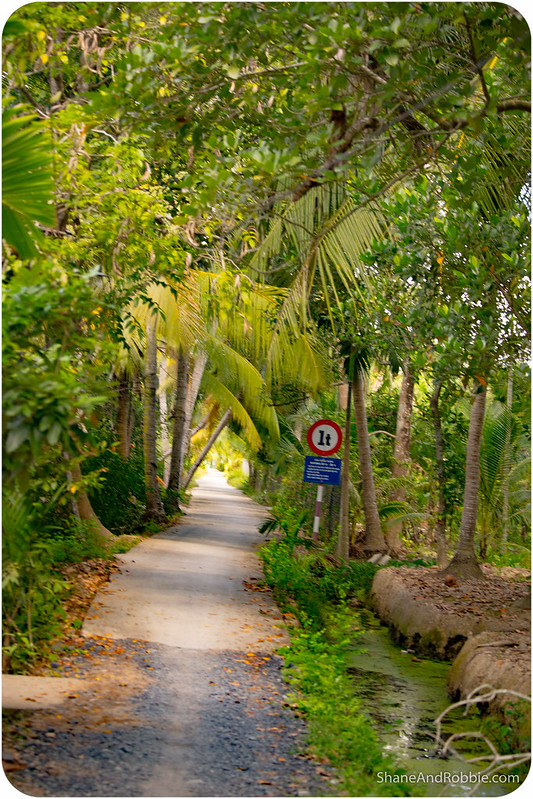 The Mekong is Asia’s longest river and one of the world’s mightiest waterways. Predictably, therefore, the region where it finally empties into the sea is huge, covering an area of almost 40,000 square kilometres.

Vietnam’s Mekong Delta is a riparian world where boats, houses, restaurants, and even markets float upon the water. It’s also one of Vietnam’s most densely populated regions, with nearly every acre of the rich alluvial land intensively farmed. What isn’t firm enough to be farmed remains rich with life and represents an important ecosystem where fish come to breed and amphibians, reptiles, and birds find sanctuary.

It was a 2 hour bus ride for us this morning, from Saigon down to My Tho, the largest city in the Mekong Delta region and Vietnam’s 5th largest urban area. From My Tho it was another 30 minutes or so by boat across to Coconut Island (Con Phung island in Vietnamese), one of the larger (and firmer) islets in the delta. 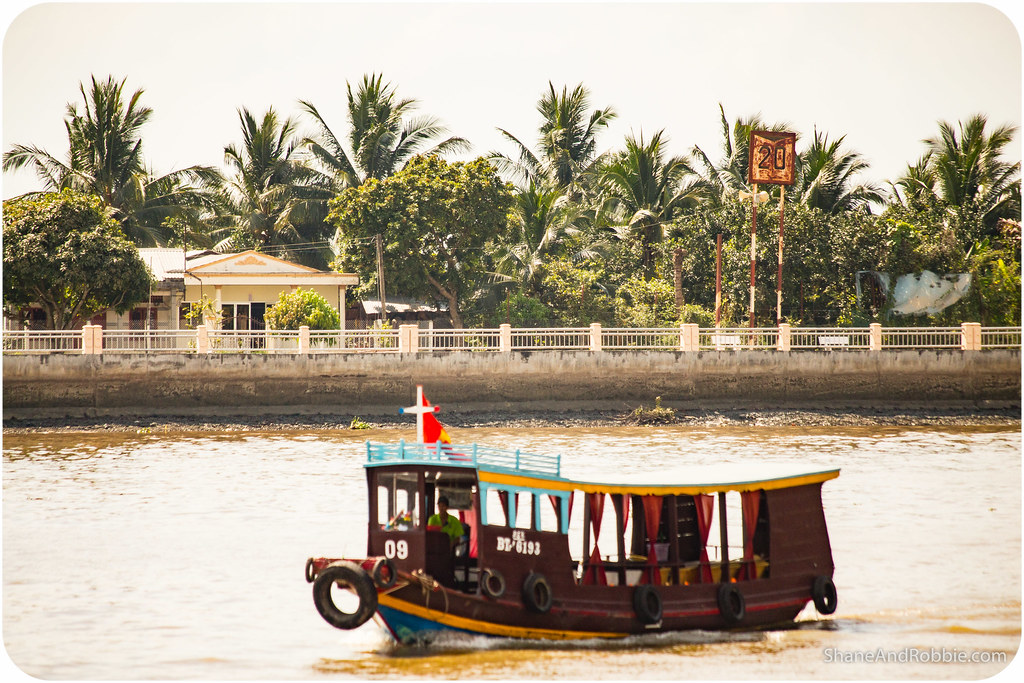 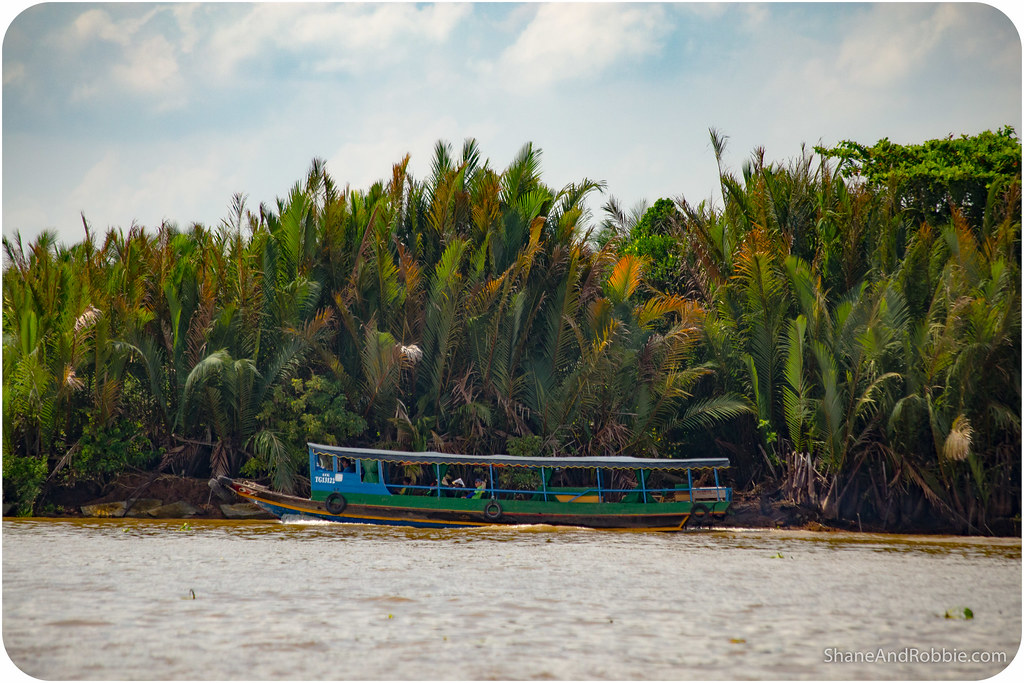 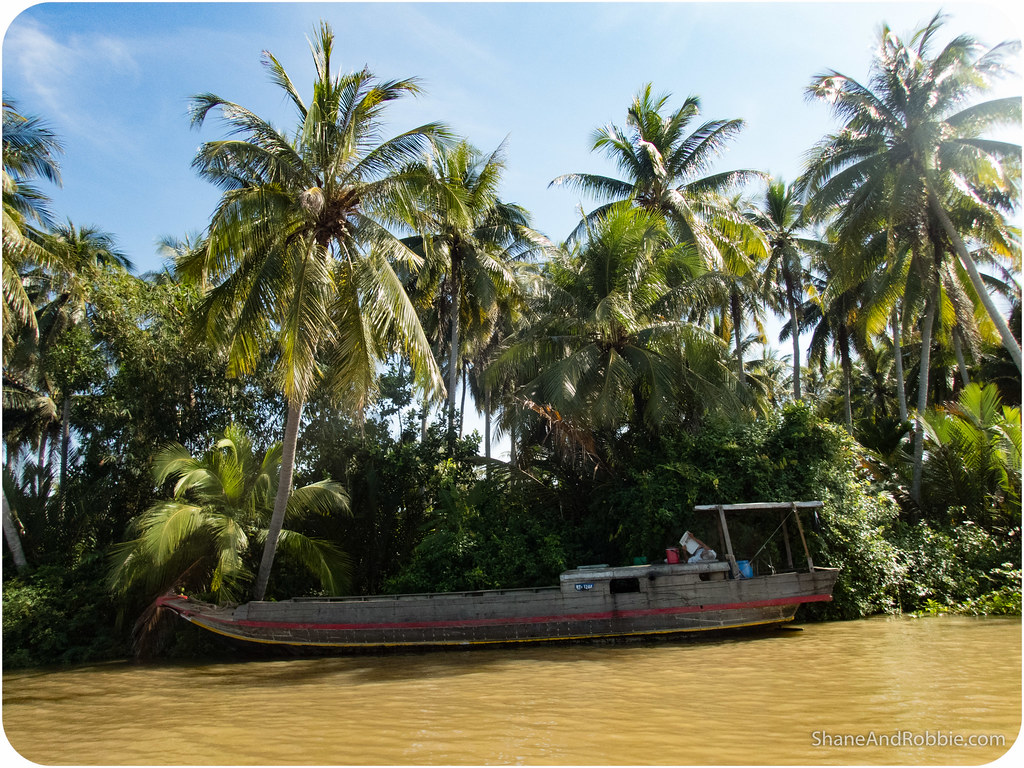 This island is named for its bountiful coconut trees, which are used by locals to make a wide variety of goods – including chewy coconut candy. We got to visit one of the local coconut product “factories” (more like a tiny cottage industry really), and watch them open coconuts, scrape out the flesh, press the flesh for coconut milk, extract coconut oil, and boil down coconut milk to make coconut candy. It was all waaaaay too touristy for our tastes, but still passingly interesting to see the diversity of products the locals make out of the humble coconut. 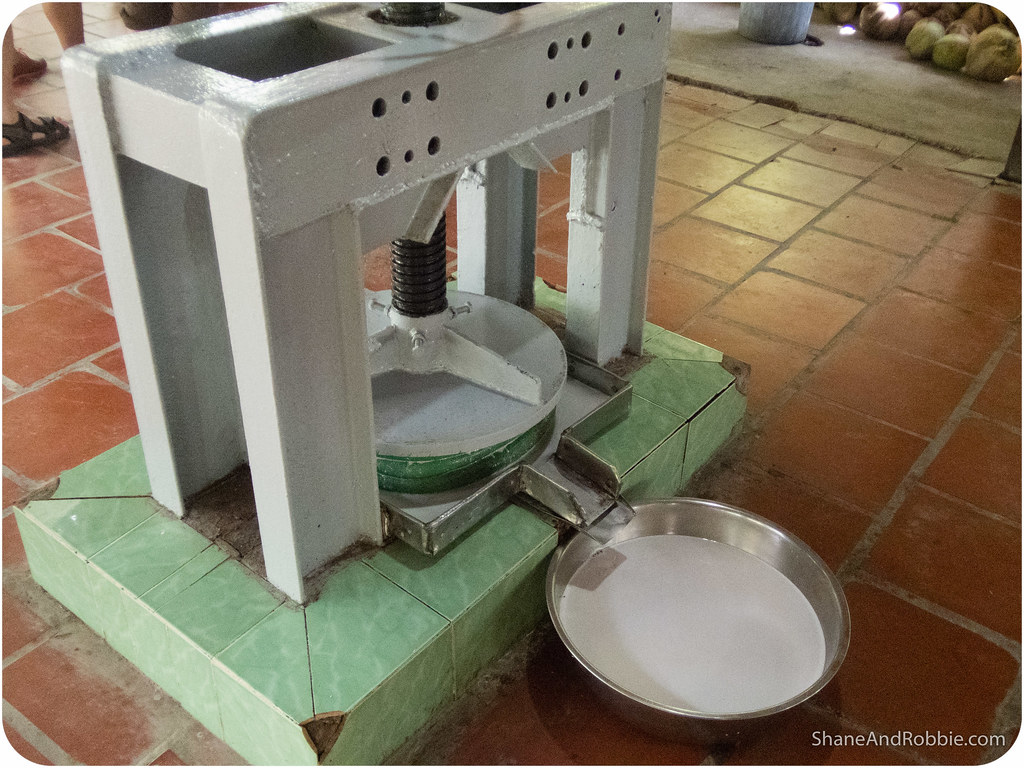 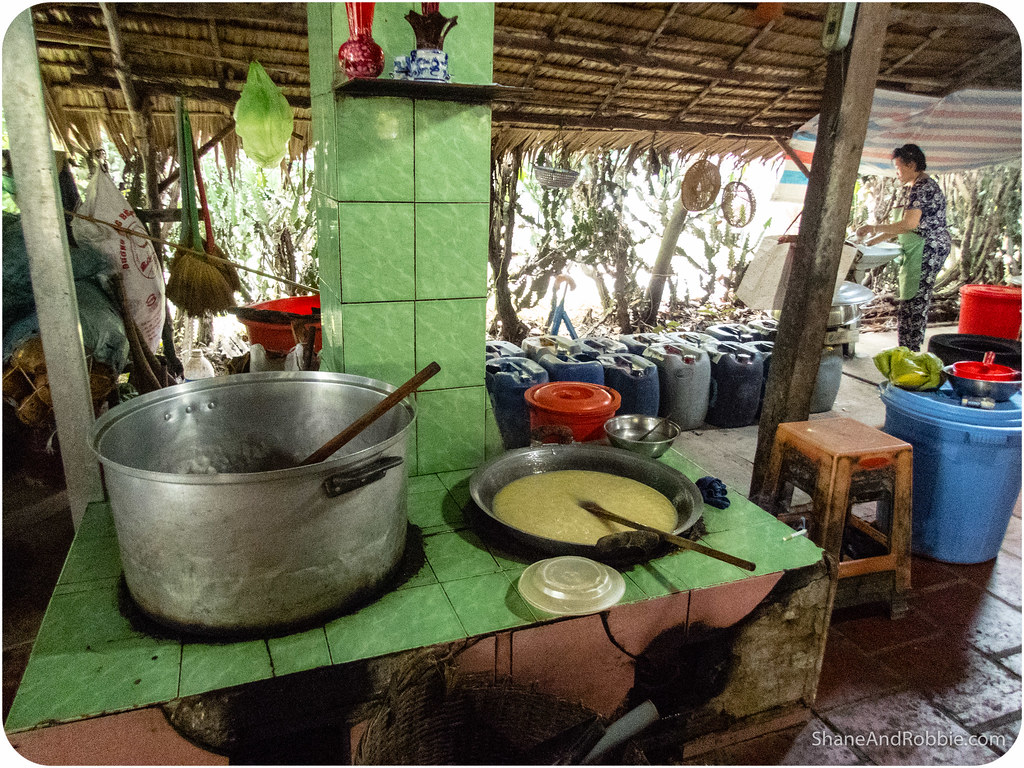 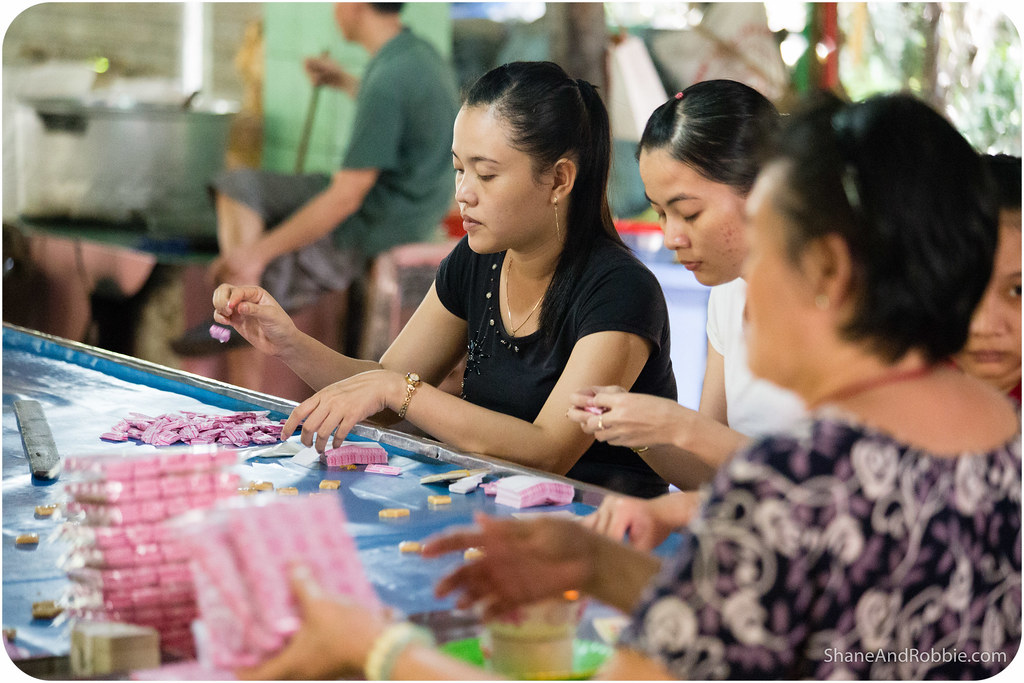 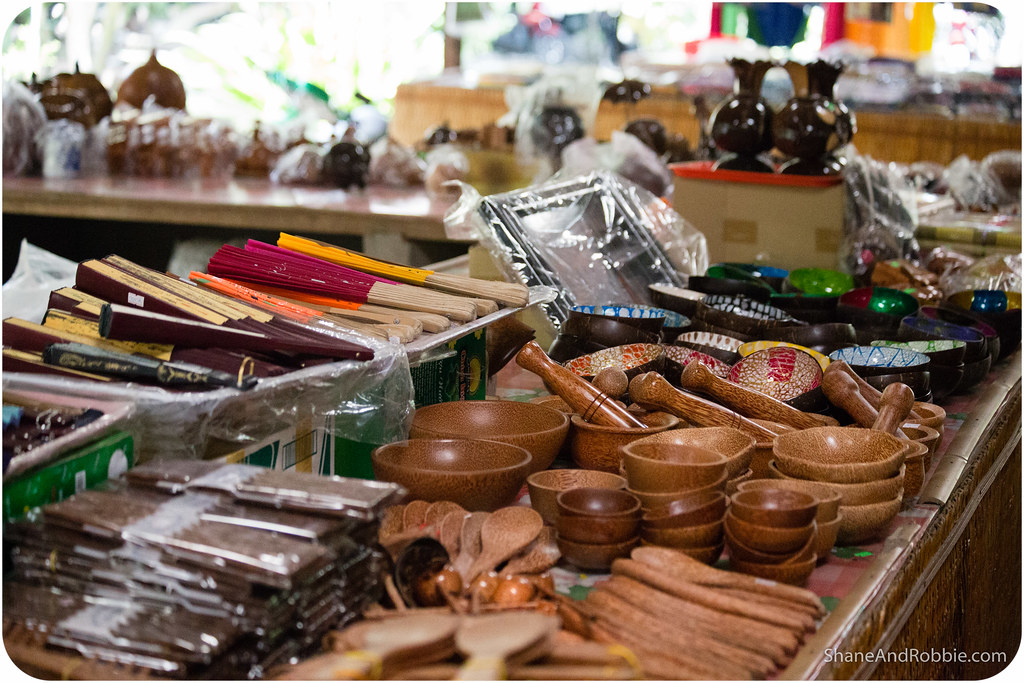 Leaving the coconut cottage (as we called it), we boarded a tuk tuk (aka: motorised death trap) for our tour around the rest of the island. We zipped across narrow pathways, past simple houses perched on tiny allotments of dry land surrounded by canals, and along roads lined with fruit trees. 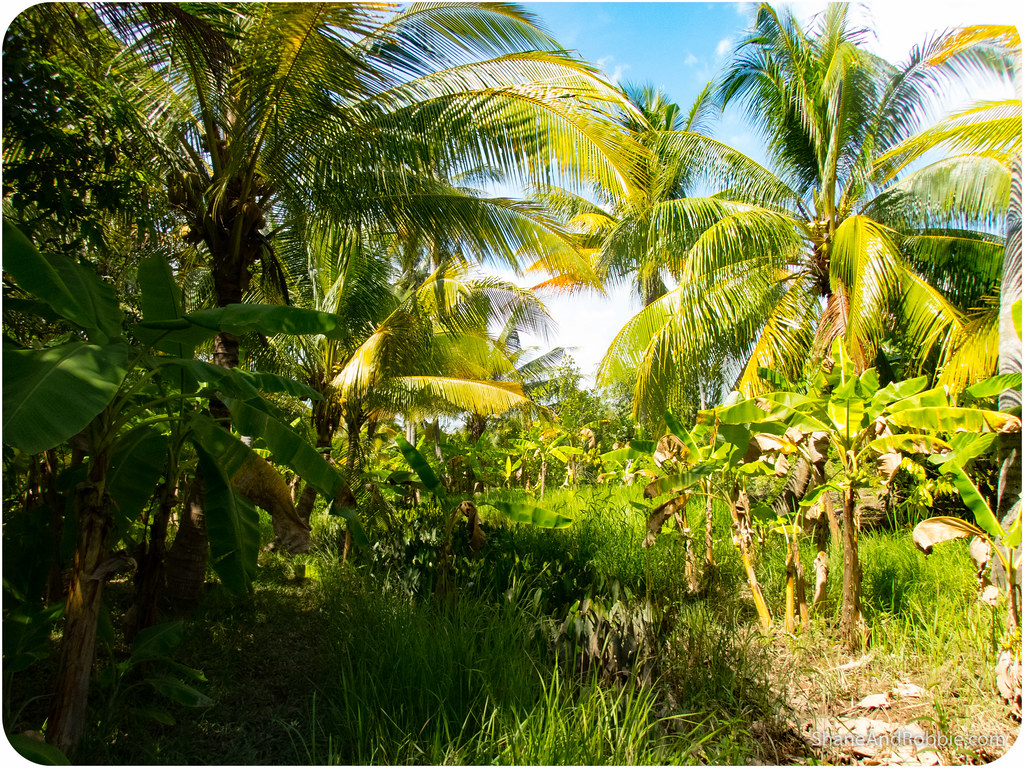 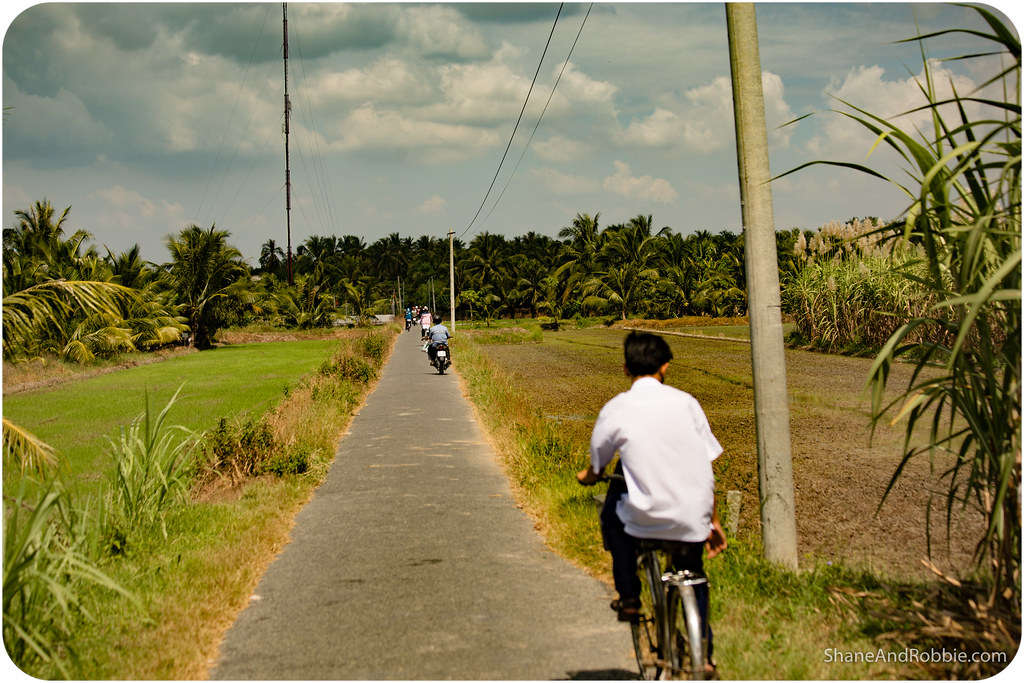 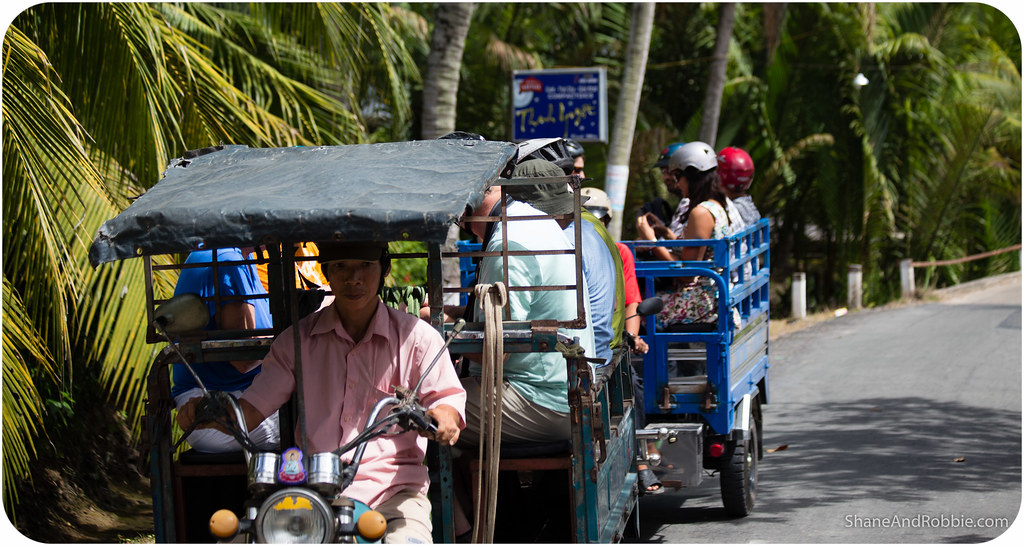 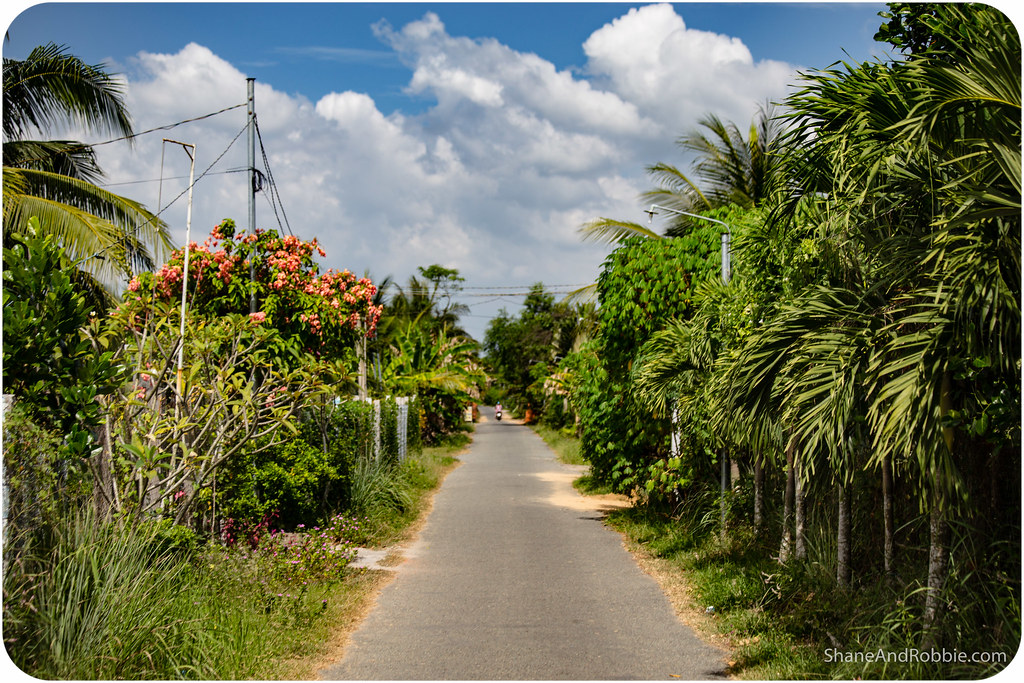 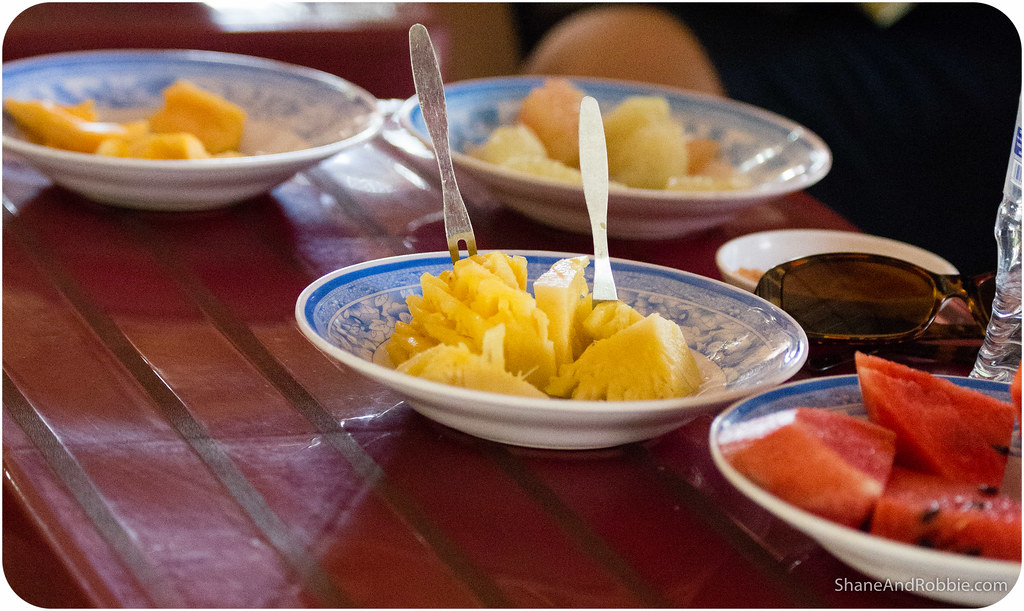 After completing a circuit around the tiny island* we stopped for lunch at a local restaurant where we were served a Mekong Delta speciality: elephant ear fish. Named for its (supposed) resemblance to an elephant’s ear, this large freshwater fish is also known as the giant gourami (Osphronemus goramy) and is native to Southeast Asia. It was served to us lightly fried, with its scales and teeth still attached and a chilli in its mouth! The flesh was tender and sweet, and paired beautifully with the chilli, lime, salt, and pepper we were given.

*Coconut island is about 1km long and only 500m across at its widest point! 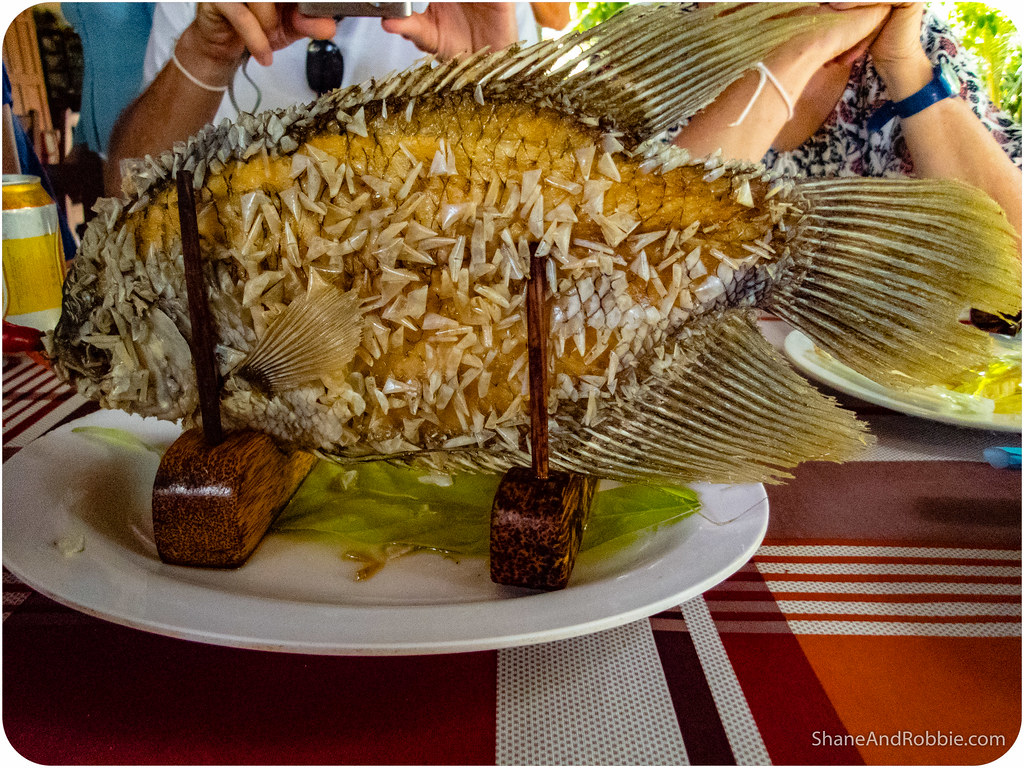 After lunch we embarked on a boat trip through some of the smaller canals of that cut their way through Coconut Island. The ride in our tiny sampan* boat through the silty water waters turned out to be the highlight of our day!

*A sampan is a flat bottomed wooden boat used across South East Asia for transportation and as fishing vessels. The word “sampan” means “three planks”, referring to the hull design, which consists of a flat bottom (made from one plank) joined to 2 sides (the other 2 planks). They’re light and buoyant, if not particularly comfortable! 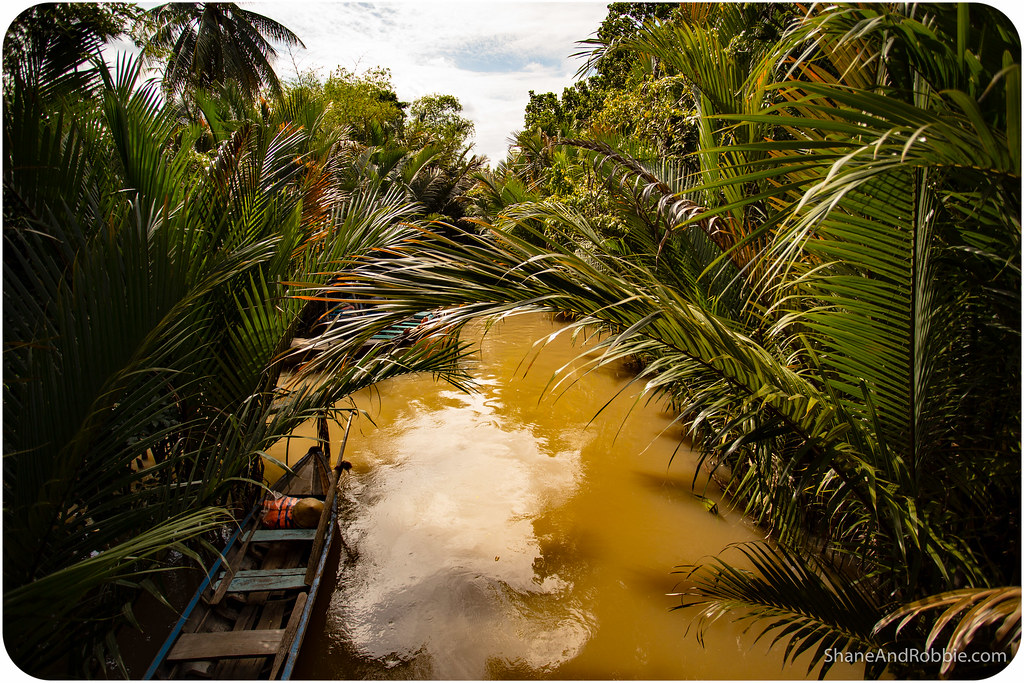 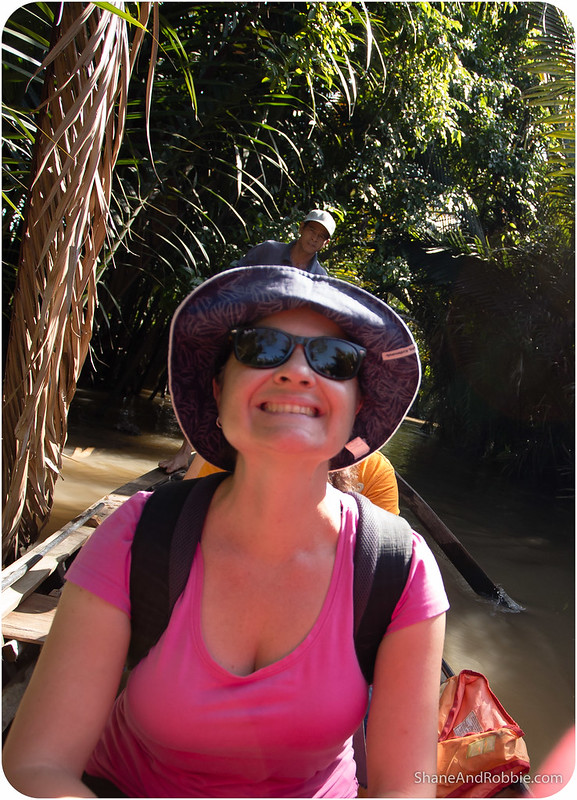 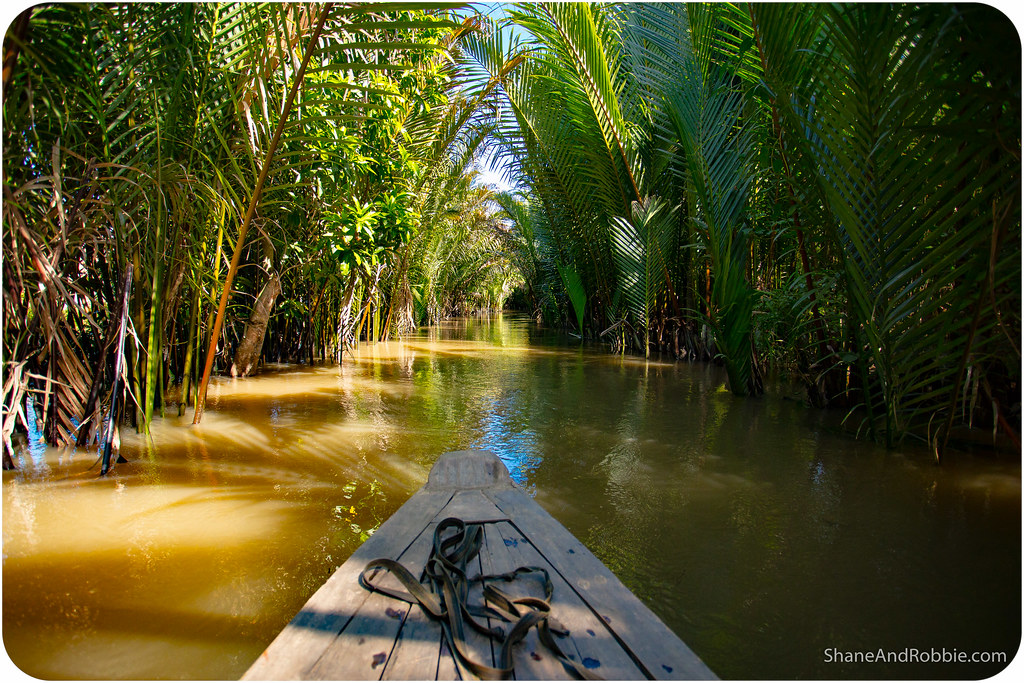 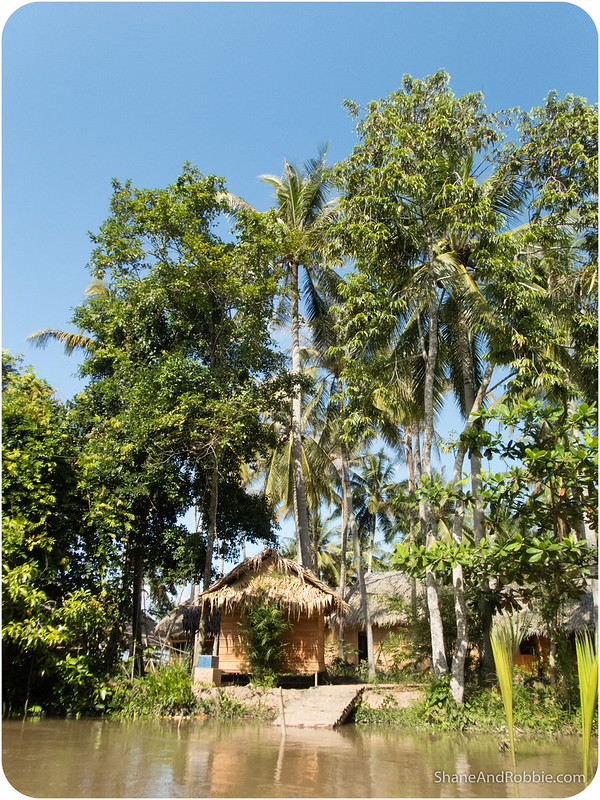 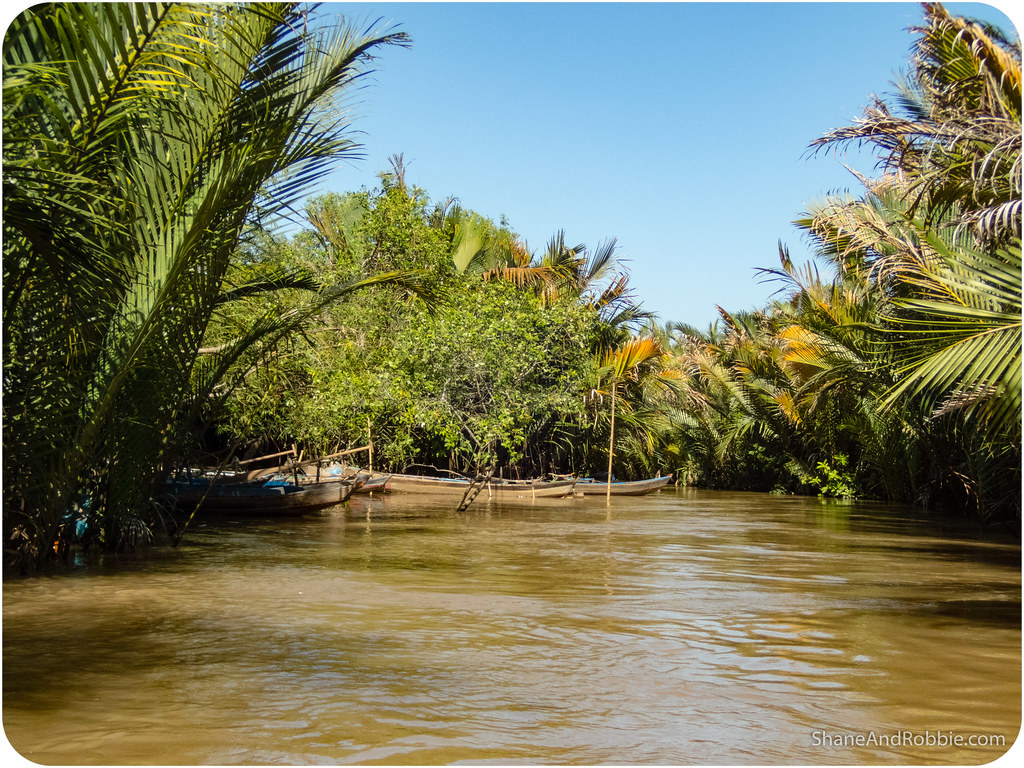 It was so quiet and calm in the canals, with palm trees and mangroves crowding us from both sides and river fish swimming around us. We even saw a snake swimming across the stream, making its way from one bank to the other! 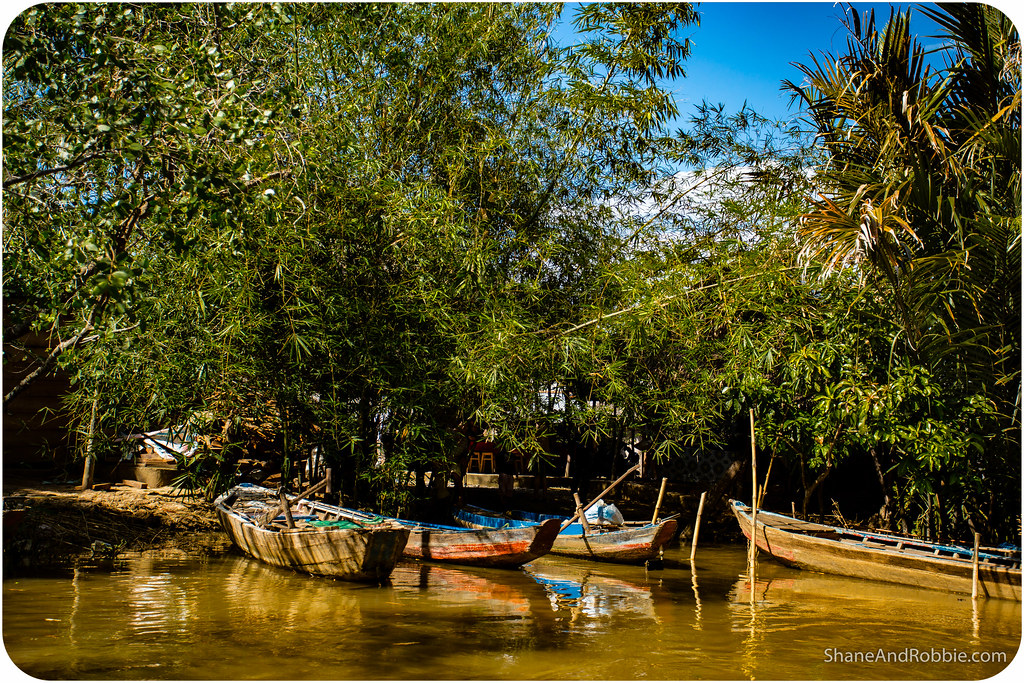 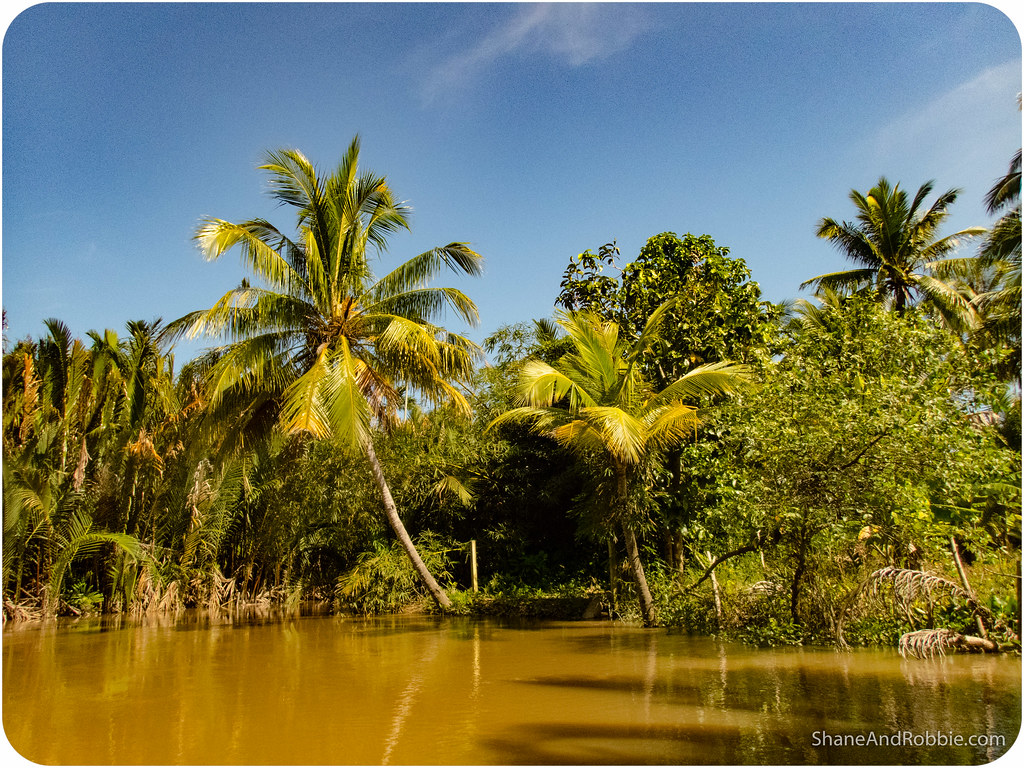 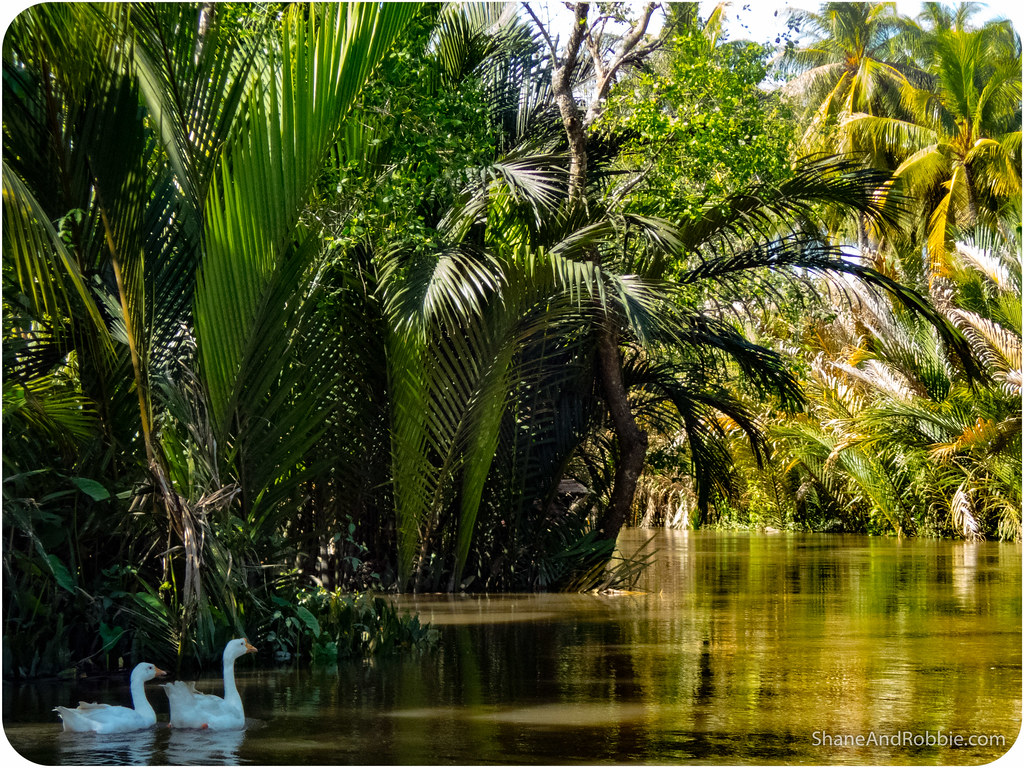 Our boatman did an incredible job if paddling us through the maze of canals and rivers, taking us past a couple of small villages, and a fancy resort. 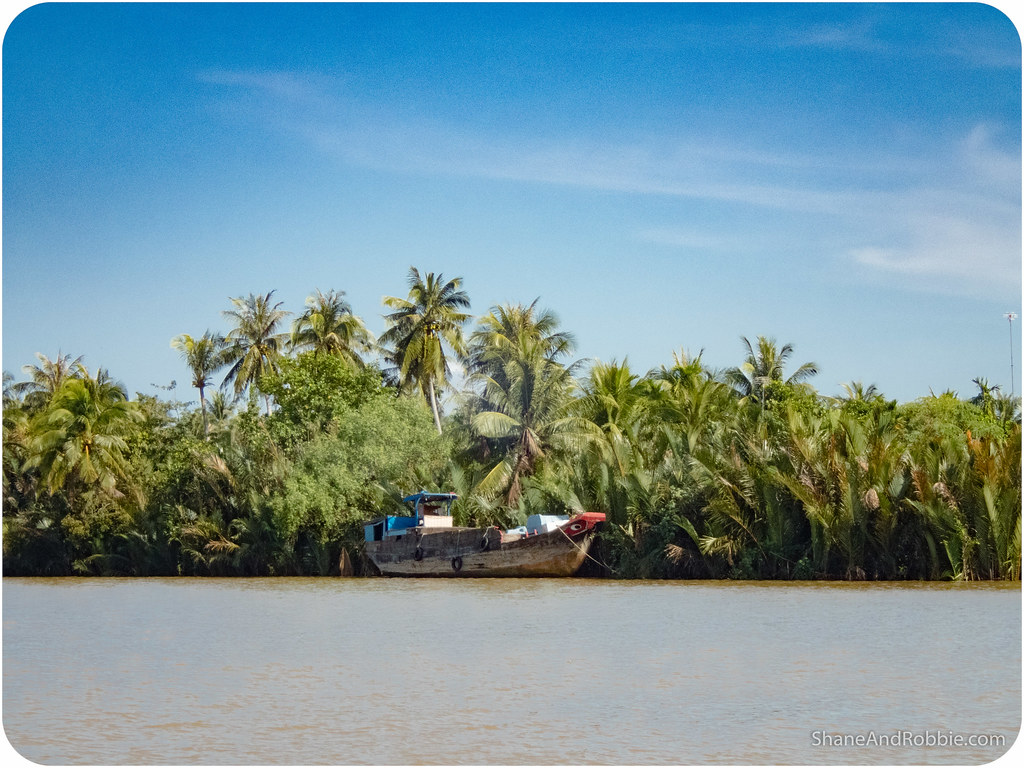 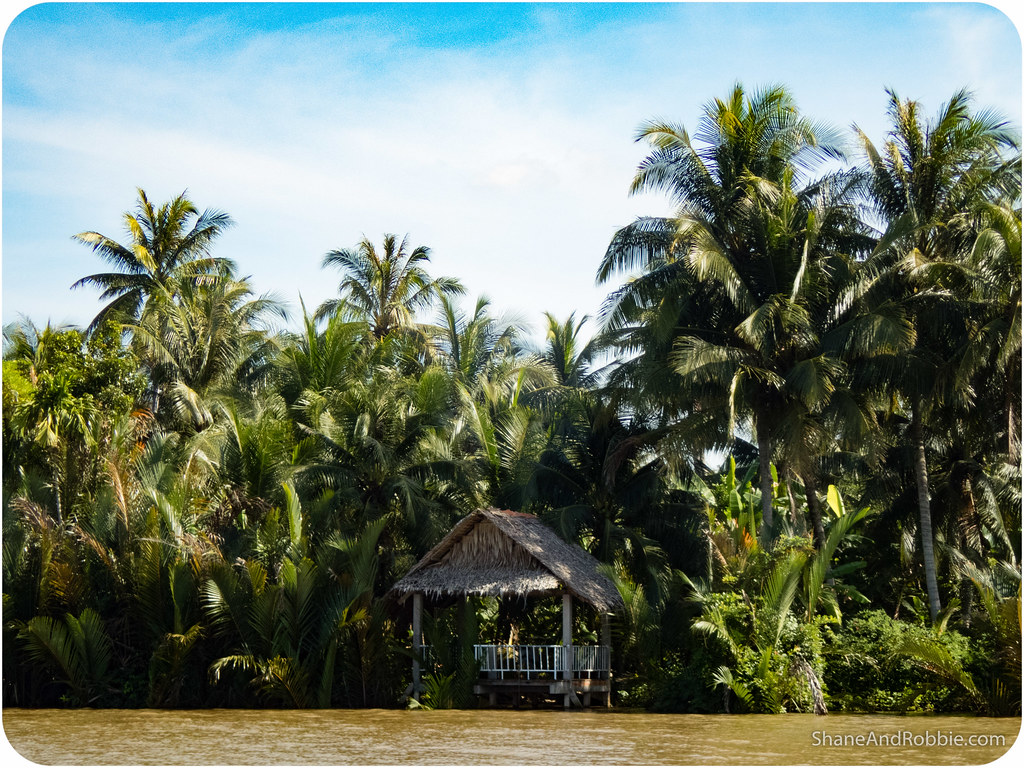 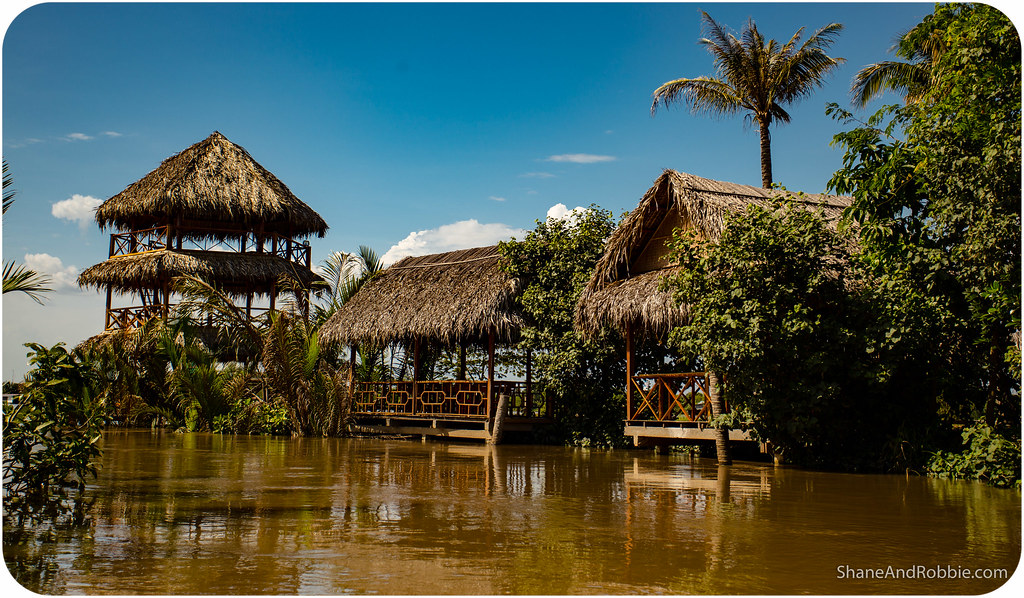 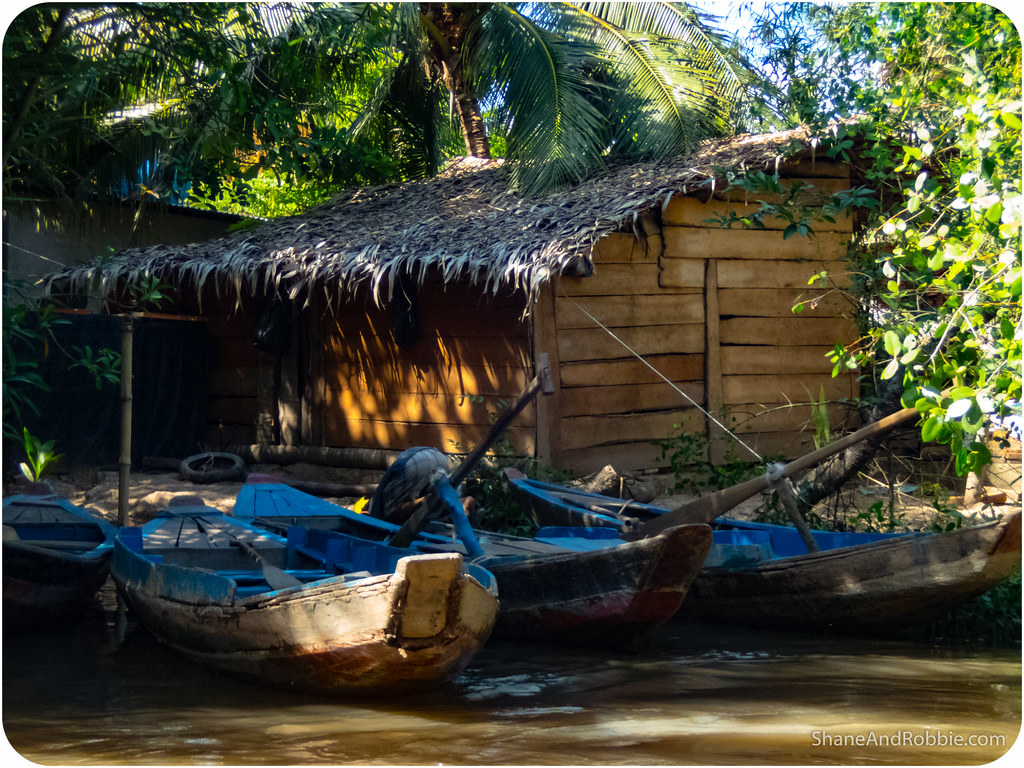 Eventually we made it back to the main boat pier in My Tho where our bus was waiting to whisk us back to Saigon. The bus trip back retraced the route we drove this morning; back through the rural rice paddies of the delta region, then into the industrial outskirts of Saigon, and finally through the chaos of the city’s heart. Along the way we caught glimpses of people going about their day, and marvelled at the vivid green of the cultivated fields. 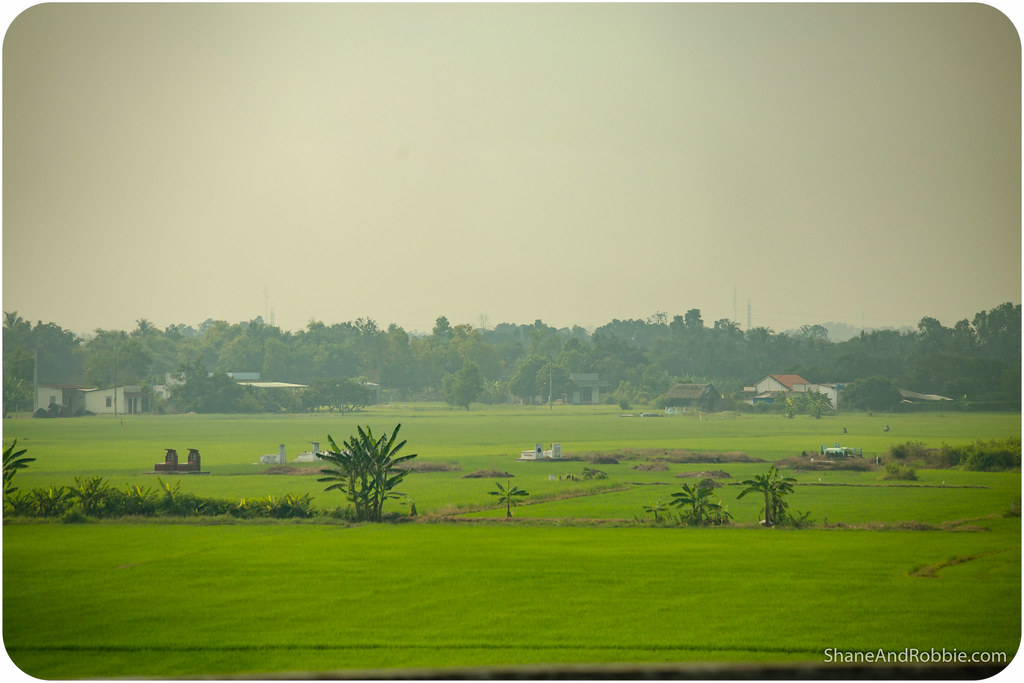 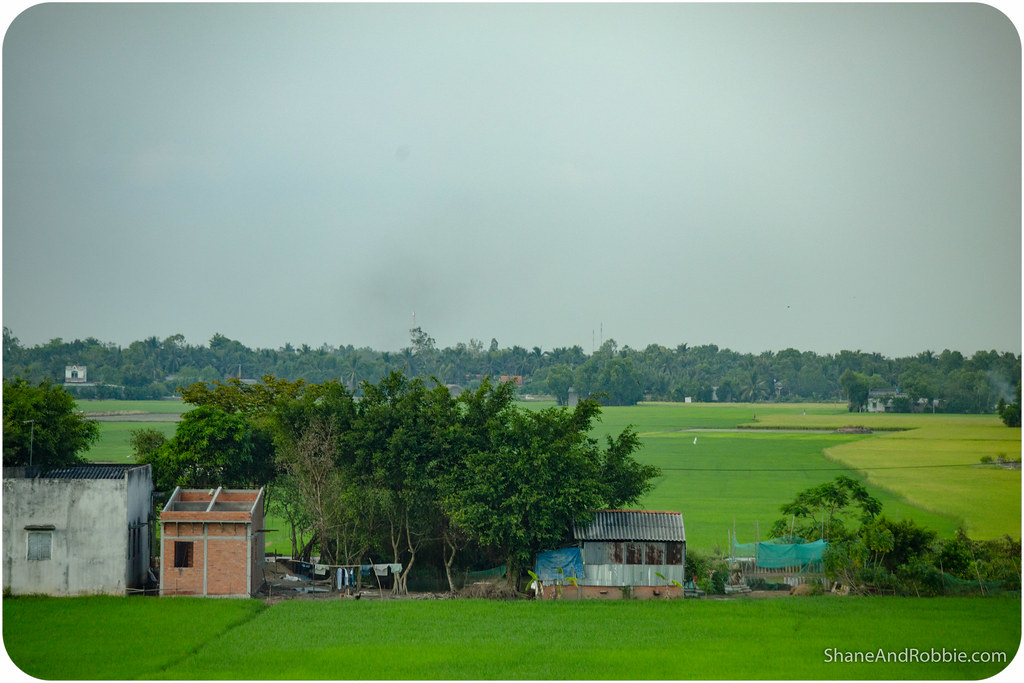 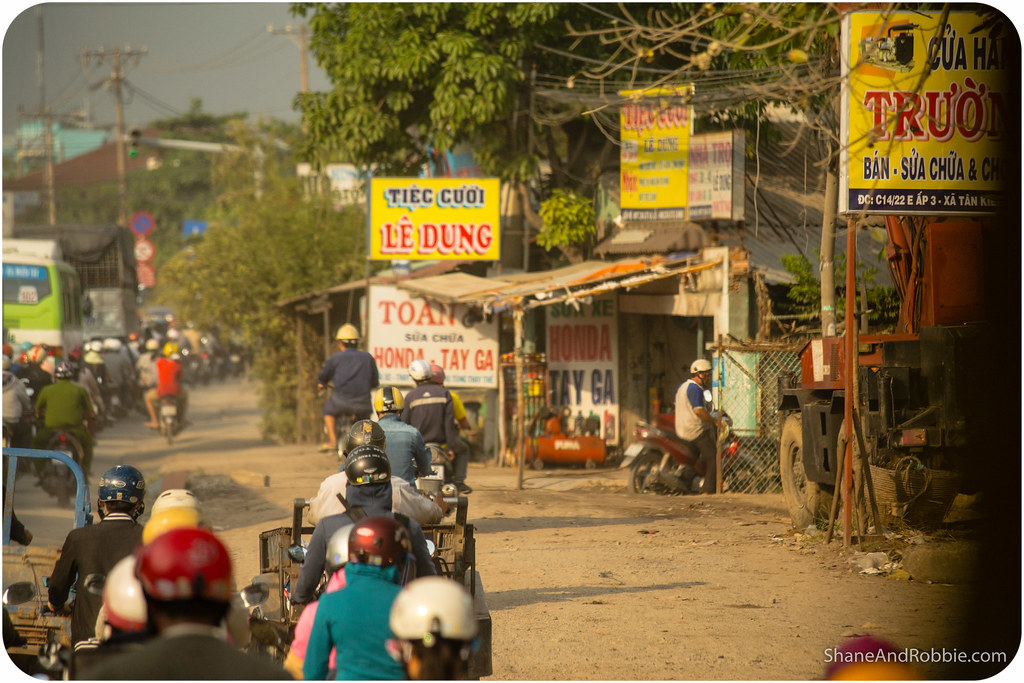 We had a really great day and were far more impressed by what we saw of life in the Mekong delta. Since we were only visiting the delta region for a single day, we didn’t venture any further afield than Coconut Island, and as lovely as that was, we wish we had gone deeper in and spent a at least a night there. Like our stay in Halong Bay, we found our short visit to the Mekong Delta today just too short. There’s a beauty to the region that requires more time to be fully appreciated, and the region closest to Saigon is just too populated and touristy to showcase the best of what the region has to offer. Once again, therefore, we find ourselves thinking that we have to come back to Vietnam to travel through this beautiful, busy, crazy country more slowly.