Our whistle-stop tour through Malaysia ended today when we crossed into Singapore – our final stop this trip. The bus trip from Melaka and the border crossing itself was quick and uneventful, which is just how we like ‘em! But our afternoon in Singapore was AWESOME, not least of all because we managed to get into Bar 57 at the Marina Bay Sands Resort and enjoy a (ridiculously expensive) drink whilst soaking up views. 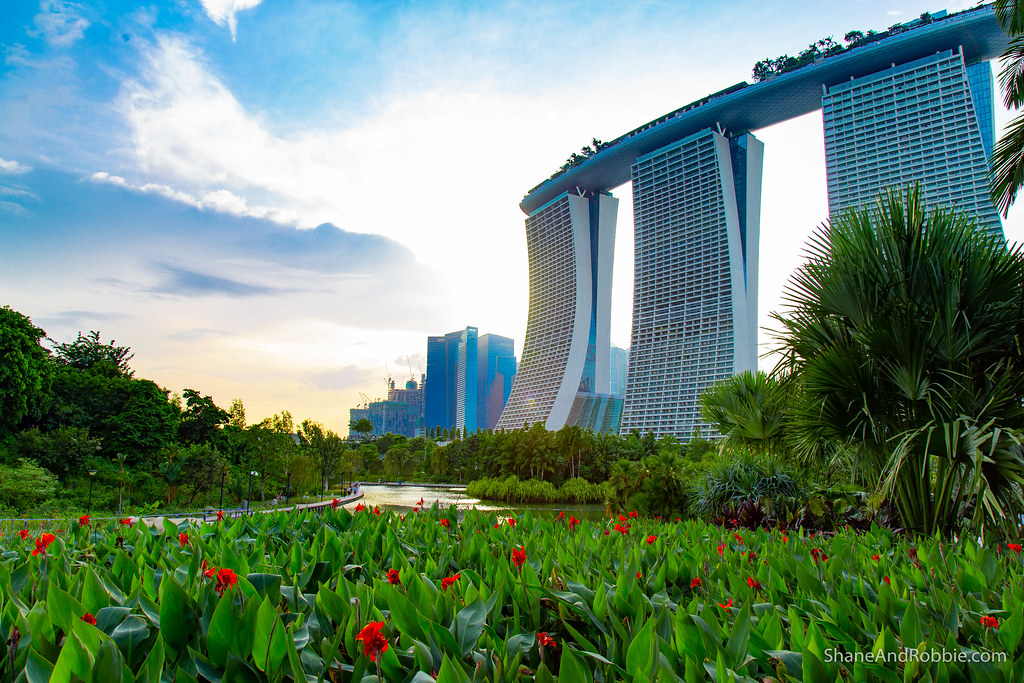 Marina Bay Sands is the world’s most expensive casino hotel, costing about $7.5 million USD to build. It includes 2,560 hotel rooms; a huge casino with 500 tables and 1,500 slots machines; a 120,000 square metre convention centre; 2 theatres; a museum; a skating rink; dozens of restaurants; and a high-end mall full of designer brand stores. Its three 55-storey towers, topped by the 350m-long, boat-shaped Sky Park, have become an iconic symbol of Singapore. 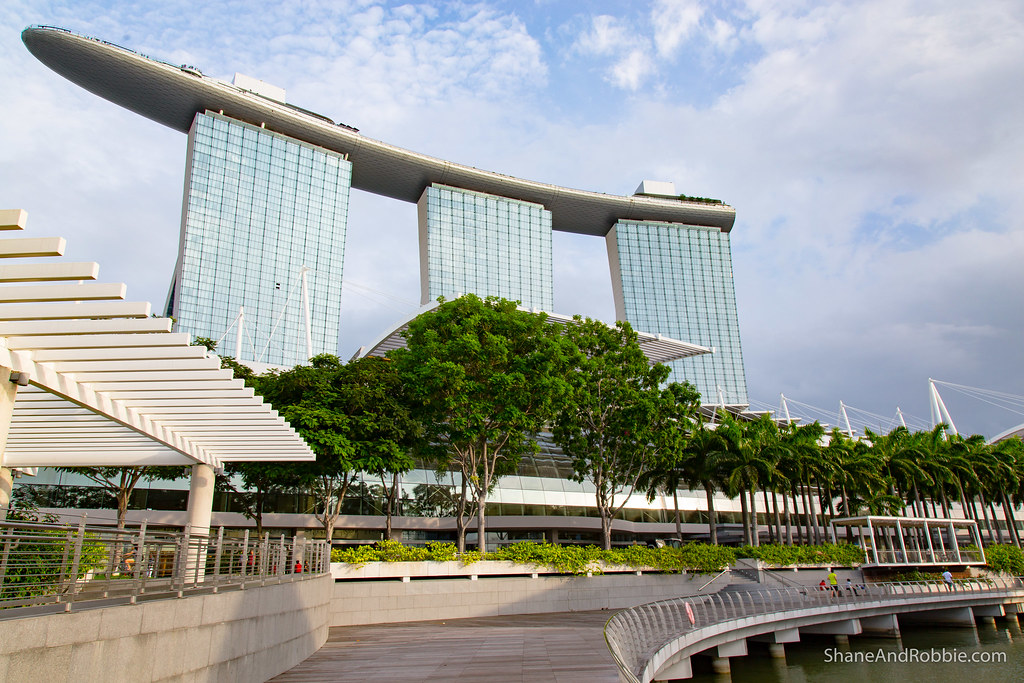 Sky Park was our destination this afternoon as we’d heard that you can get into Bar 57 (located on the 57th floor) as long as you buy a drink. We couldn’t get in to the swimming pool area as that’s just for guests, and with rooms prices STARTING AT $800SGD per night, we’re likely NEVER going to get to swim in the Marina Bay Sands infinity pool! 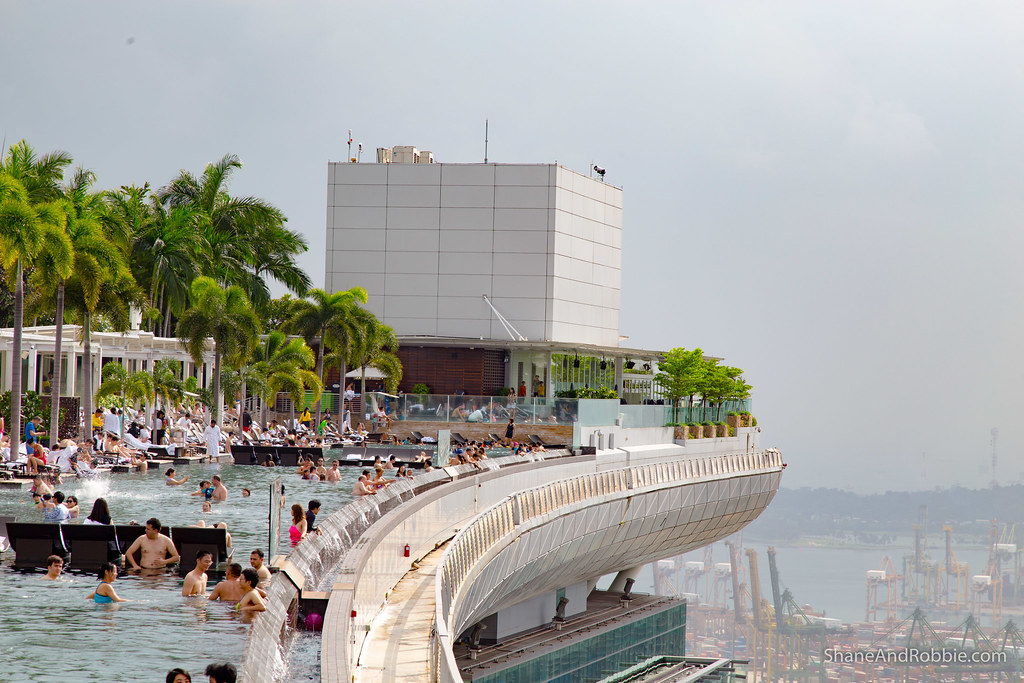 Still, sitting at the bar sipping our $35SGD cocktails (?!), we got to see all the way across Marina Bay to Singapore’s glittering CBD. Strolling around Sky Park we could see the fantastical “Super Trees” of Gardens by the Bay, the uniquely shaped Science Museum of Singapore, and the busy Singapore Strait. 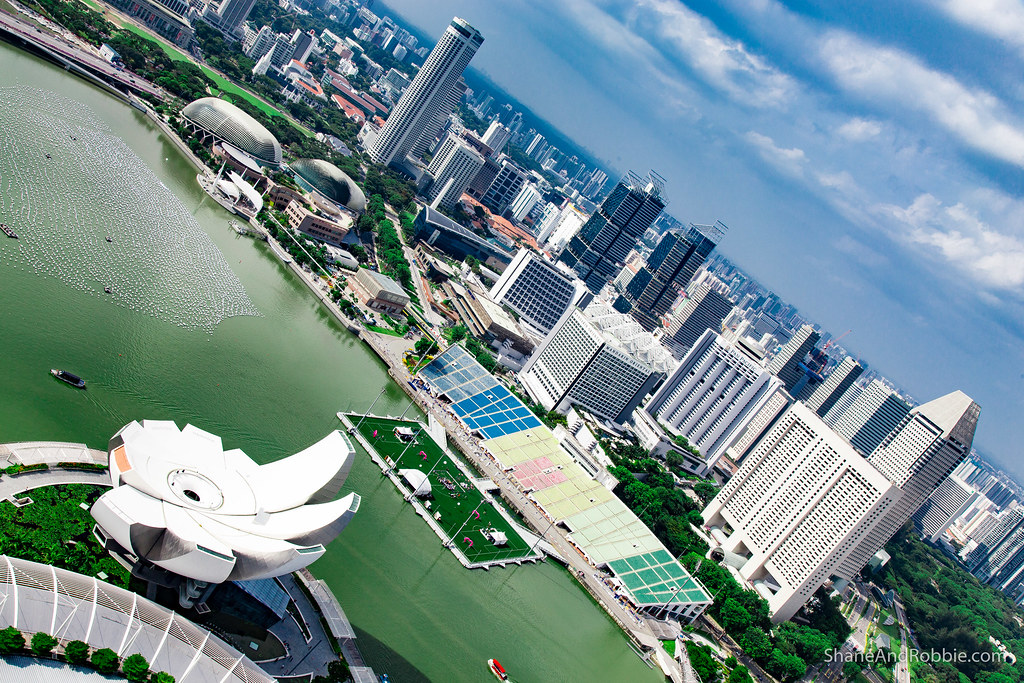 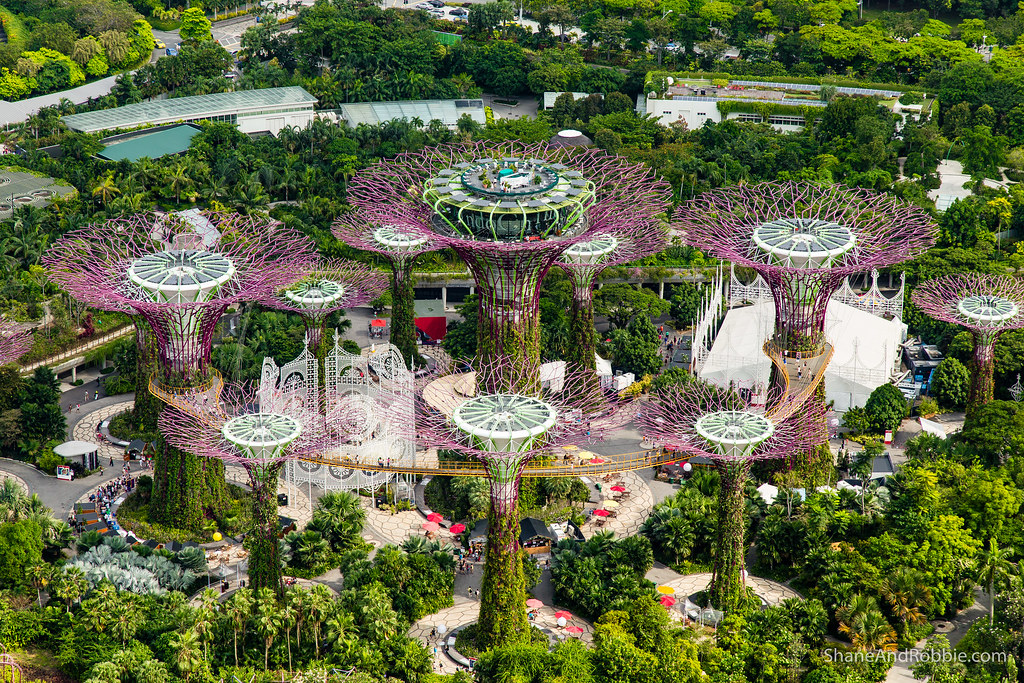 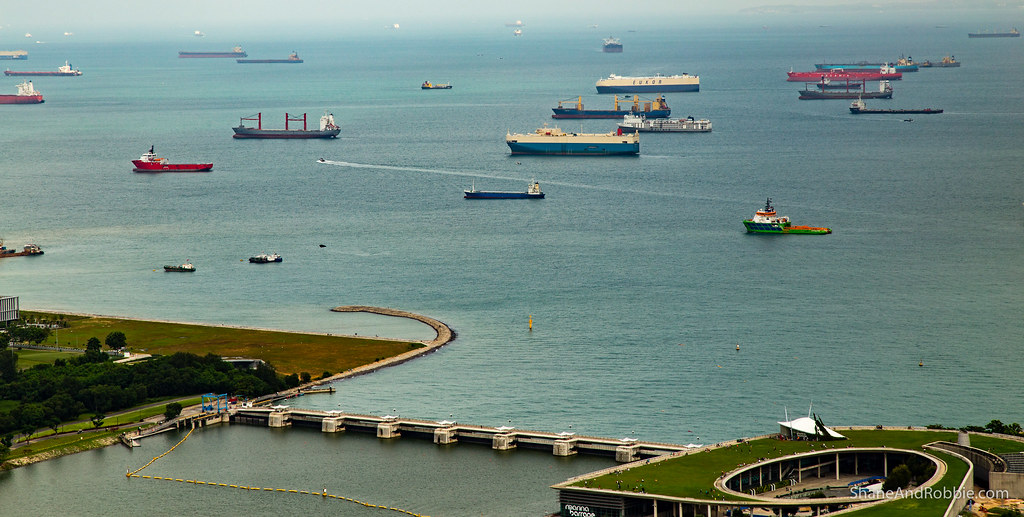 Singapore is often referred to as the Garden City, and from our elevated vantage point we could definitely see why – this equatorial* city state is just so green! It’s also a very modern city-state and the one of the wealthiest, most influential countries in Asia. Despite its small size, Singapore packs a serious punch economically and politically. We’ve been here before and love how clean, safe, and easy-to-navigate Singapore is. It’s also an awesome place for good food, fun festivals, and cultural tourism due to its multicultural population of Chinese, Malay, Indian, and ex-pat Westerners**.

**Of the 5.5 million people who live in Singapore, about a third are foreign nationals attracted by the opportunities offered here. 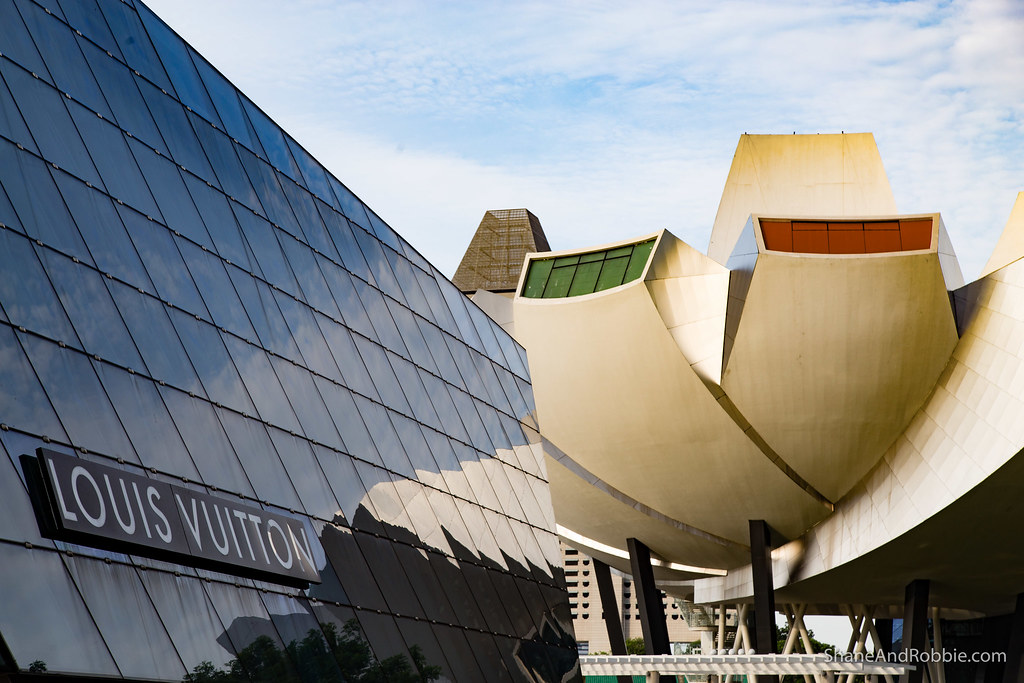 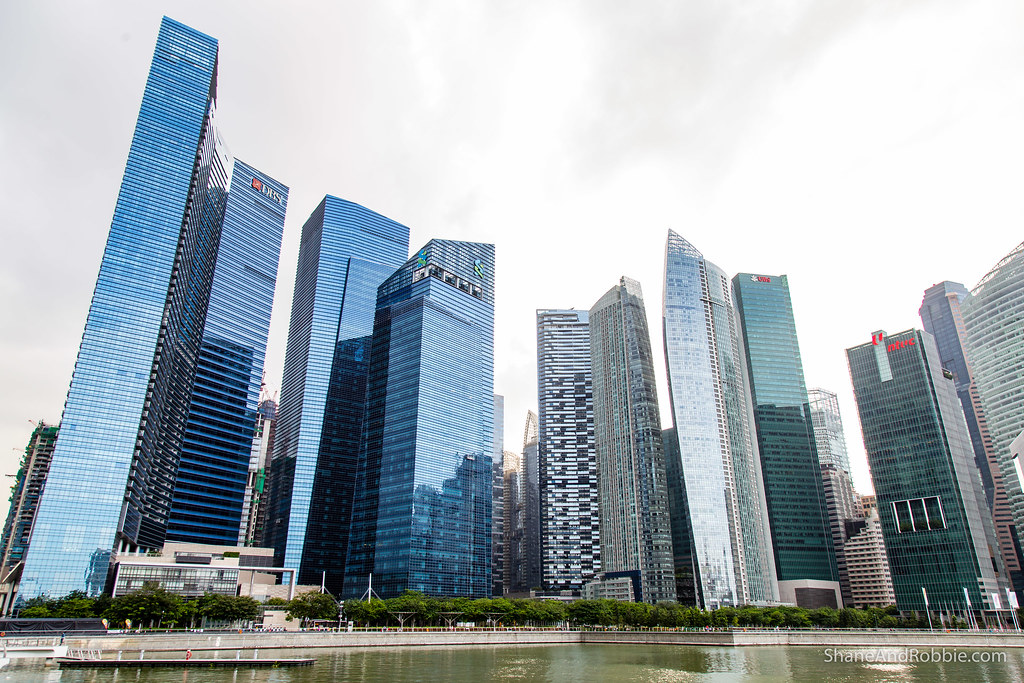 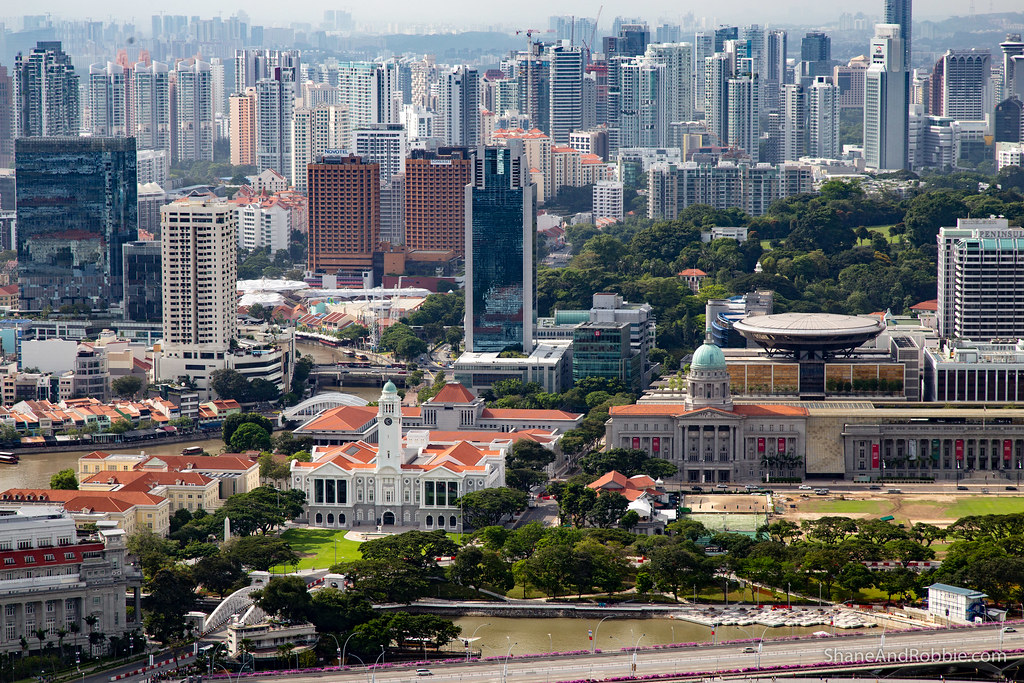 The name Singapore is derived from the Malay word “Singapura” (Singa = “lion”; Pura = “city”). Sang Nila Utama, who founded and named the island adopted the moniker after supposedly seeing a lion in the jungle here. Since lions have never lived in this part of the world, chances are what he saw was a tiger, but the name stuck and today the lion is Singapore’s national symbol. 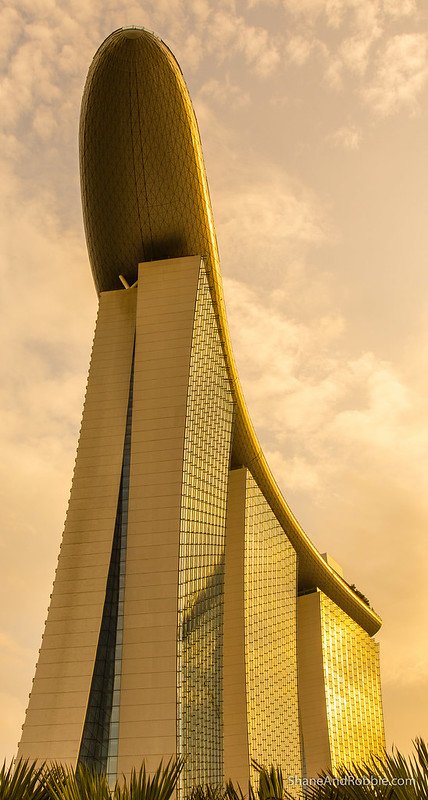 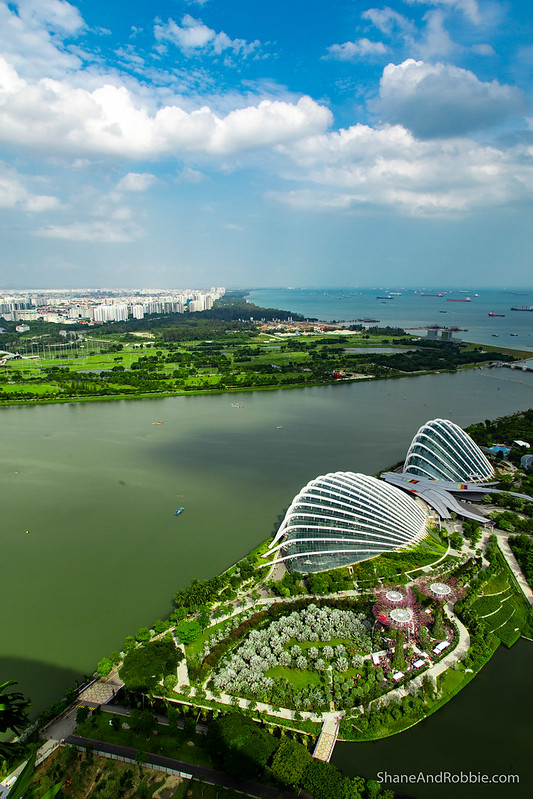 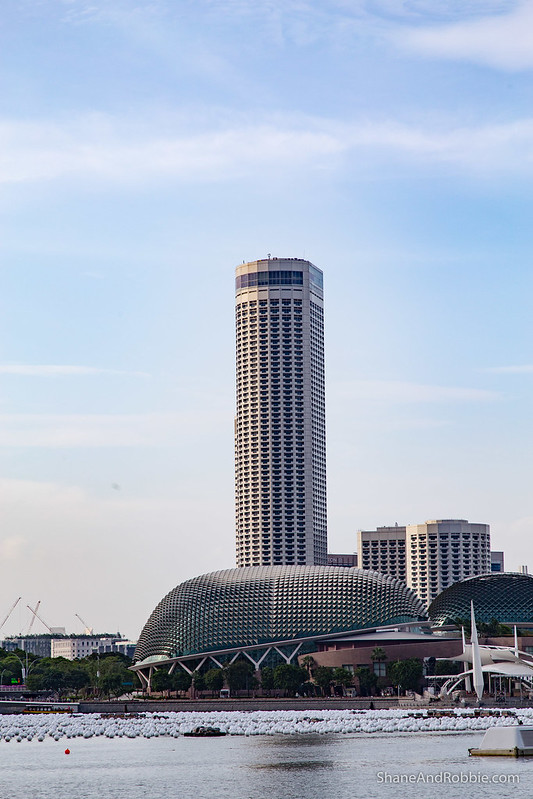 The other thing that could be Singapore’s national symbol is the shopping mall – there are just so many of them on this island! The most exclusive of these is the Marina Centre, just near the Marina Bay Sands Resort. We stopped in this high-end shopping centre to look at their Christmas display and admire the fancy shops before moving on to explore the rest of the Marina Bay district. 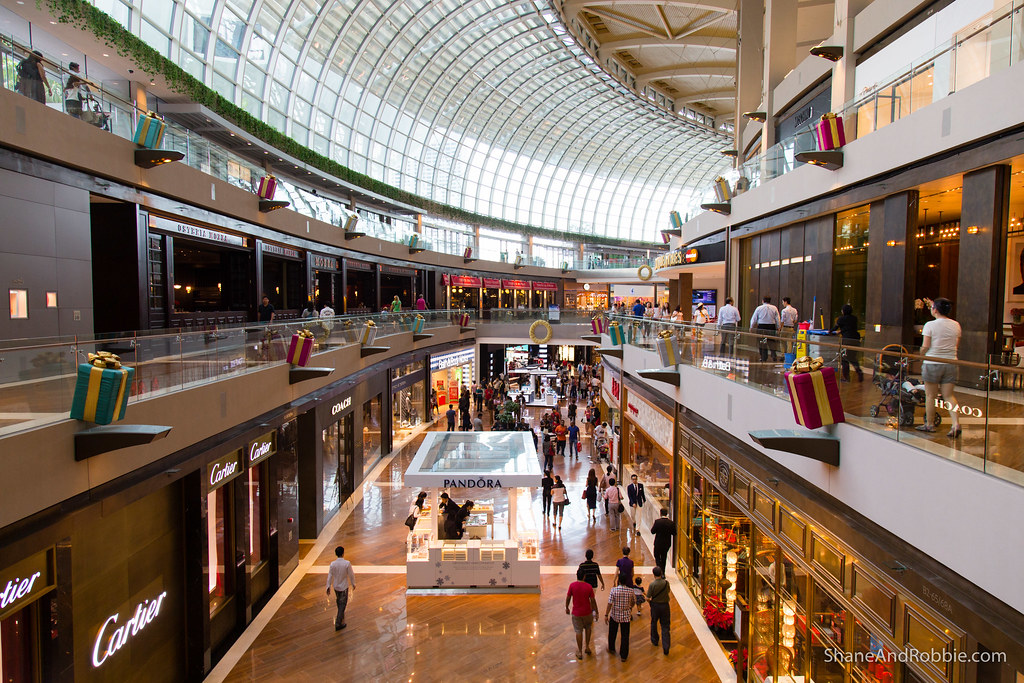 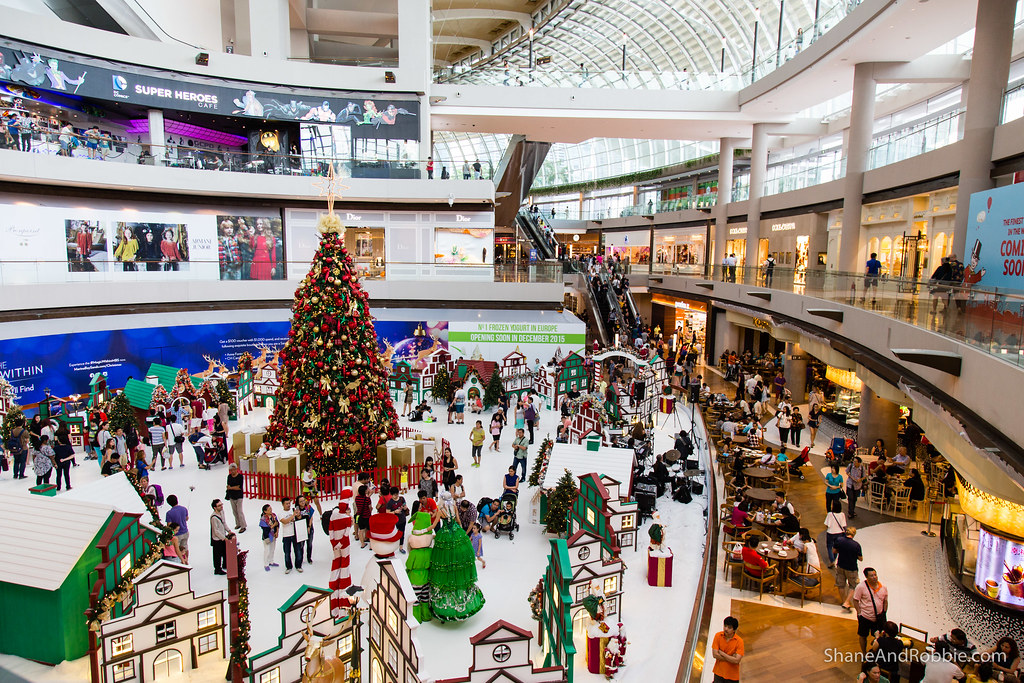 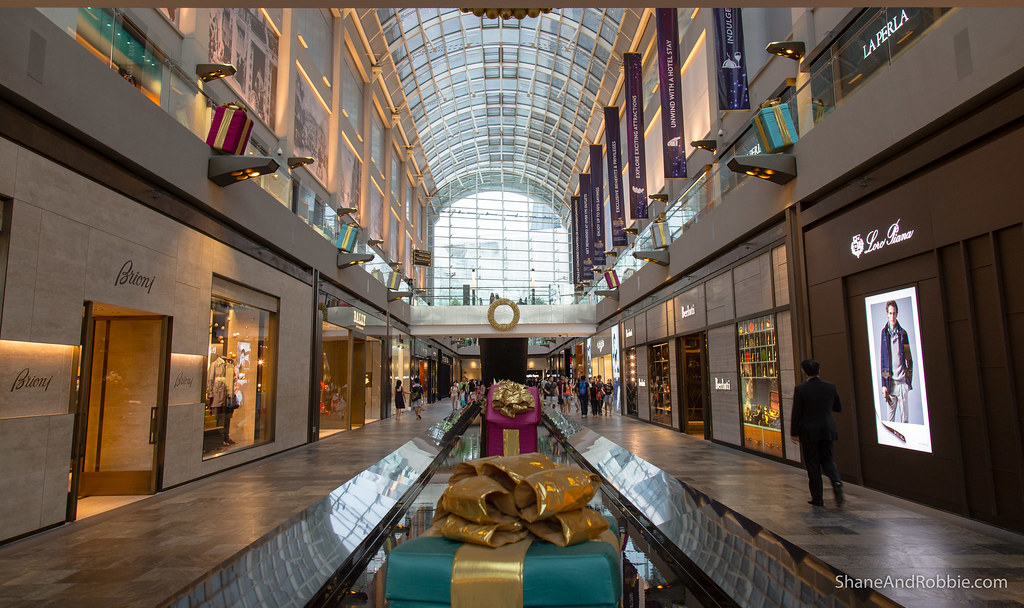 Marina Bay is a 360 hectare parcel of reclaimed land that, like much of Singapore, started out as mosquito-infested swamp but was soon tamed and turned into an ultra-modern museum and entertainment precinct. The Singapore Science Museum is here, as is the floating arena known as “The Float”, and the Singapore Flyer – the largest Ferris wheel in the world. 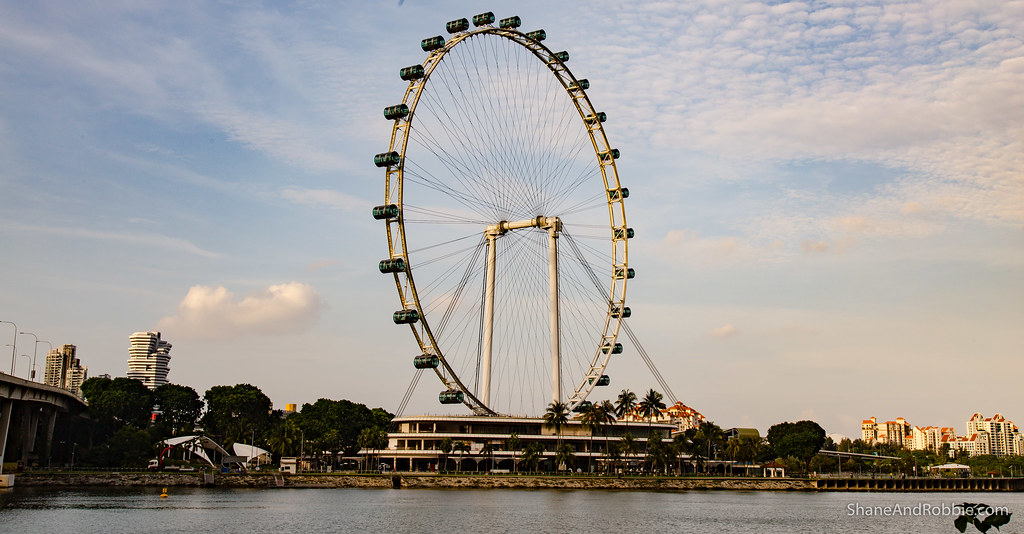 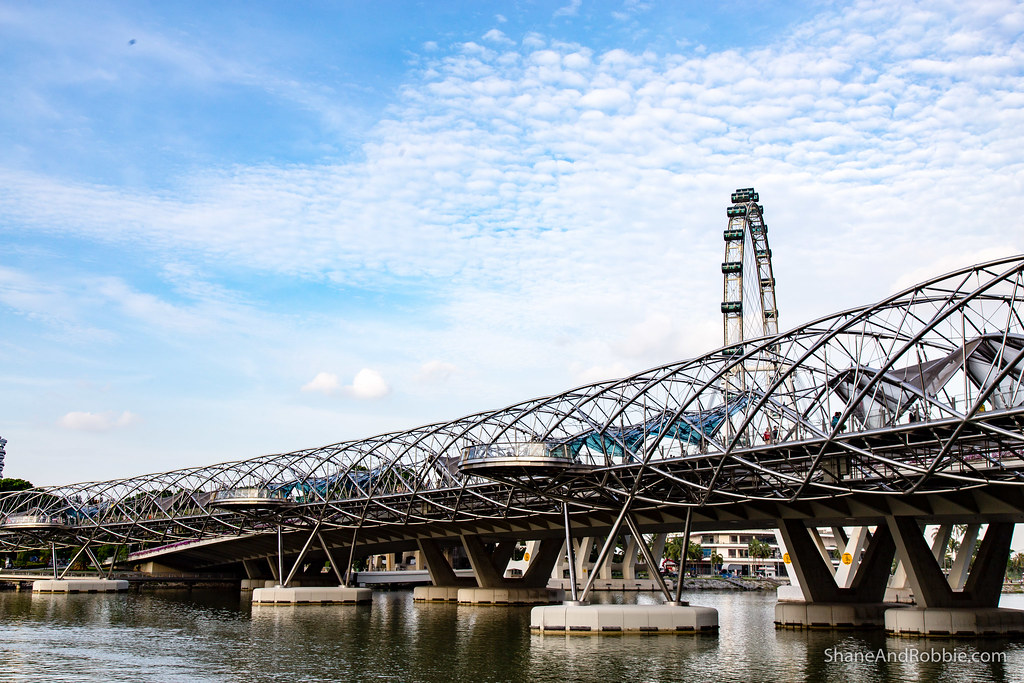 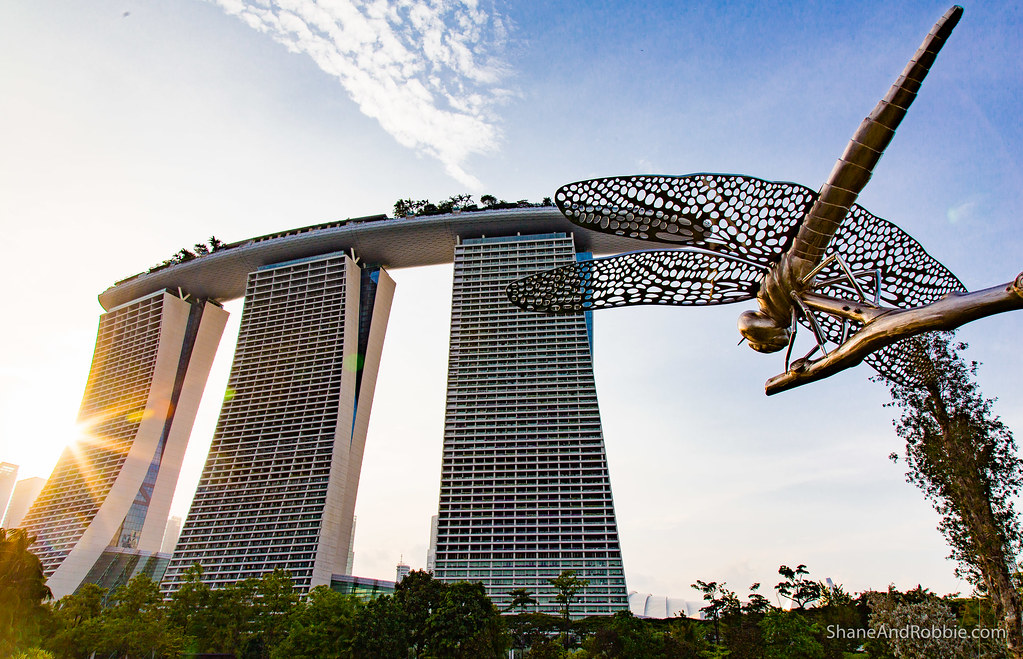 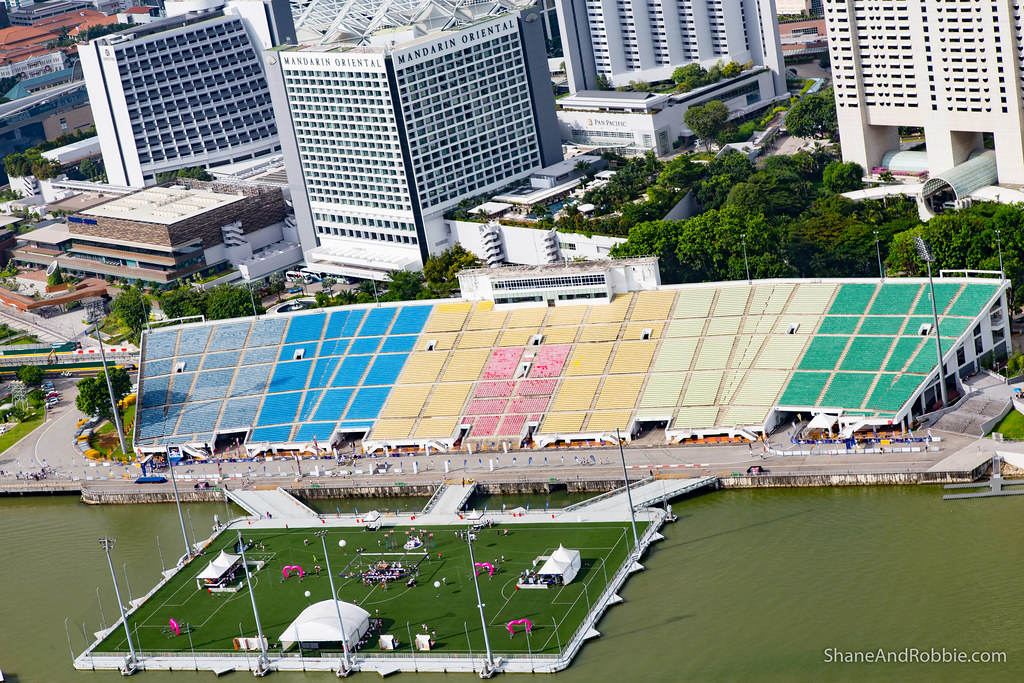 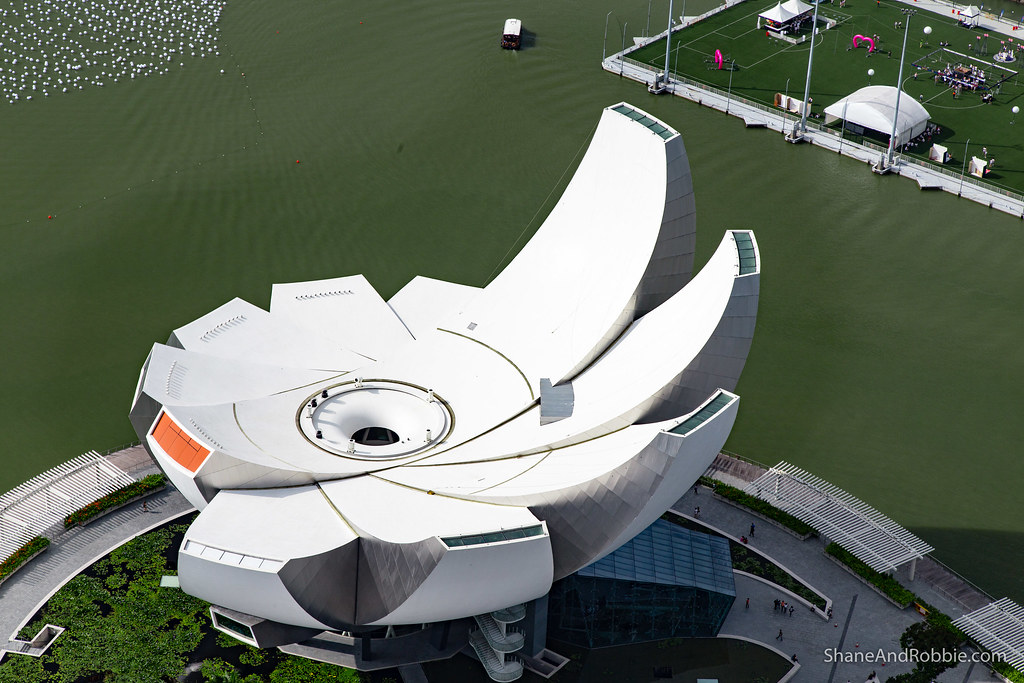 Located next to Marina Bay is Singapore’s latest spectacular public space: Gardens by the Bay. Last time we were here it wasn’t even open yet, so we were keen to go exploring and see what had been done with this 100 hectares of reclaimed land. 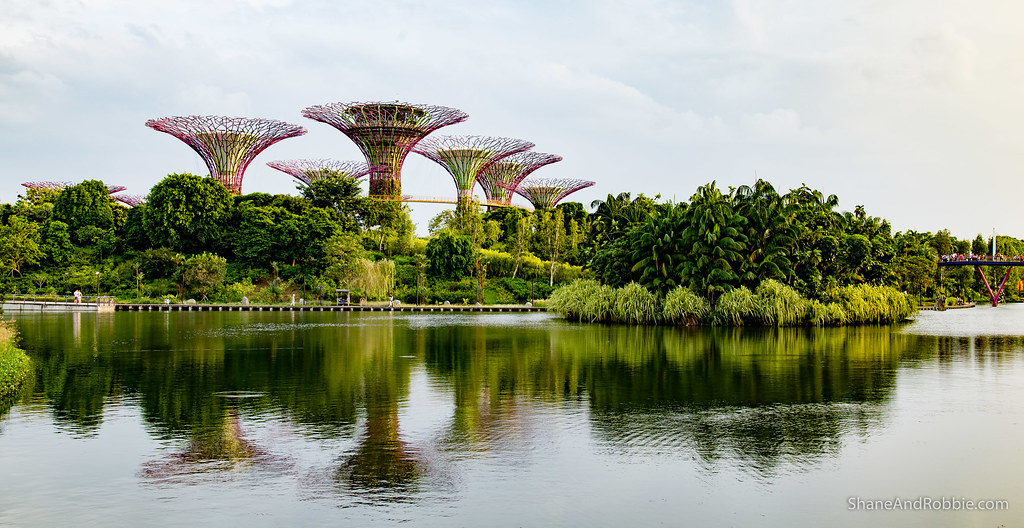 Our verdict: Gardens by the Bay is amazing! There are lakes surrounded by walkways and promenades; conservatories filled with orchids and exotic tropical flowers; picnic spaces, restaurants and cafés; and the magnificent Super Trees. 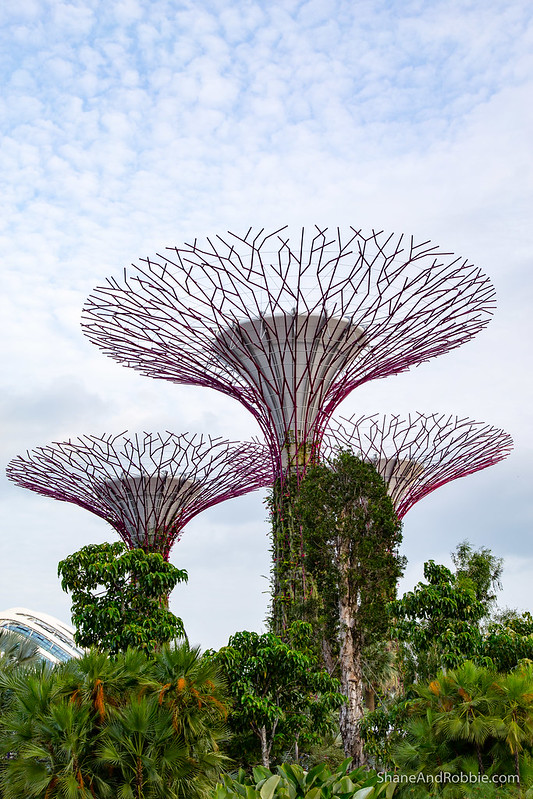 Super Trees are tree-shaped vertical gardens that look like something out of a sci fi movie. Rising 50m into the air, they’re linked by a suspended walkway that you can pay to walk around (the Sky Walk). 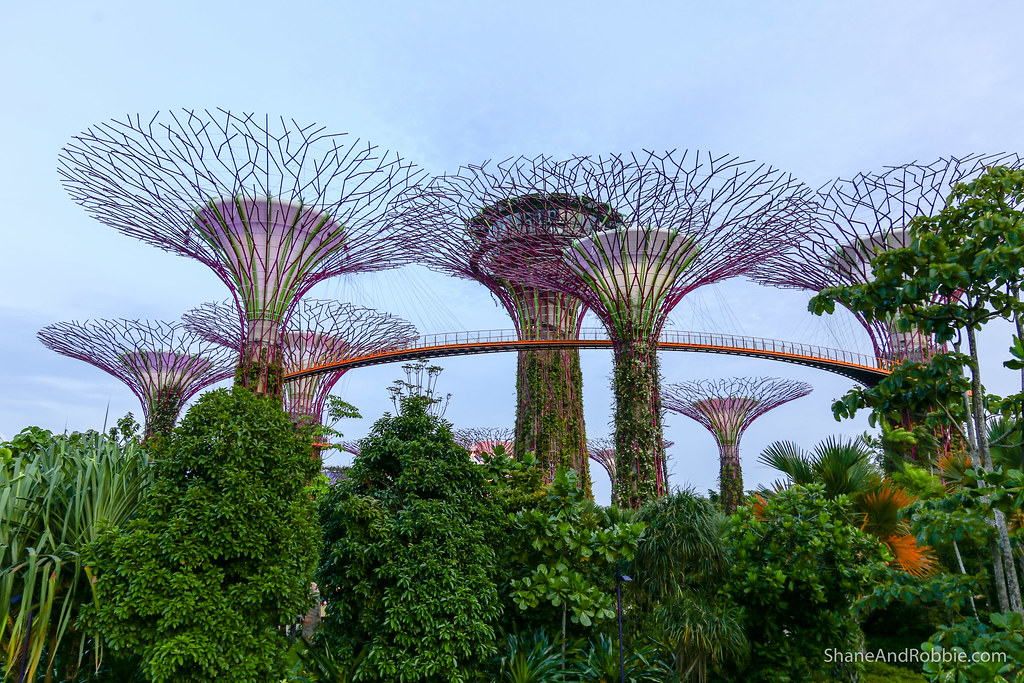 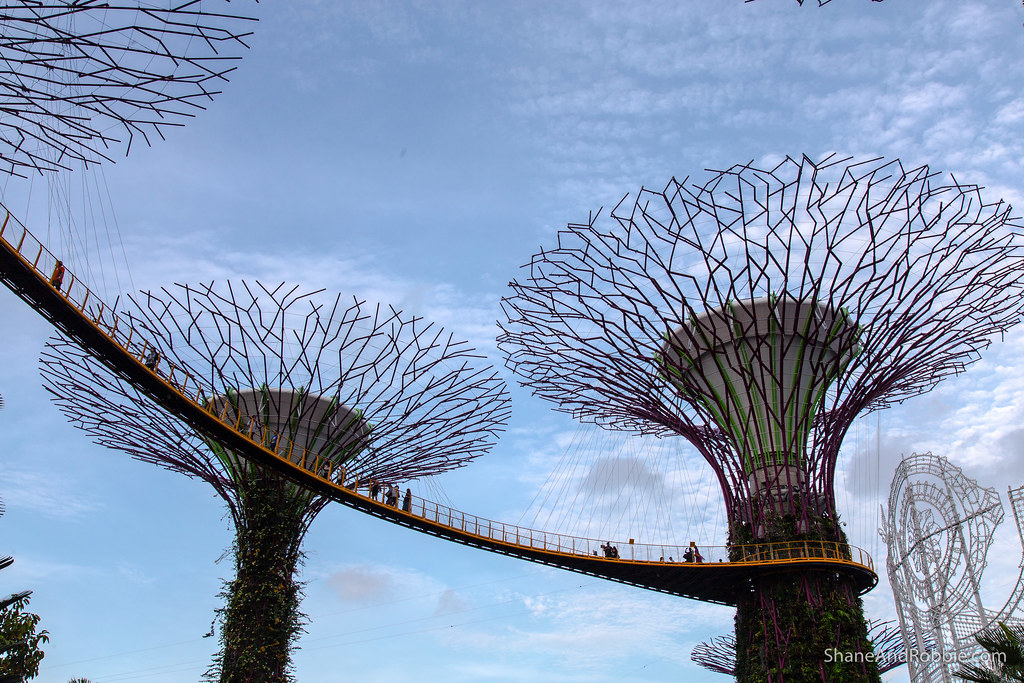 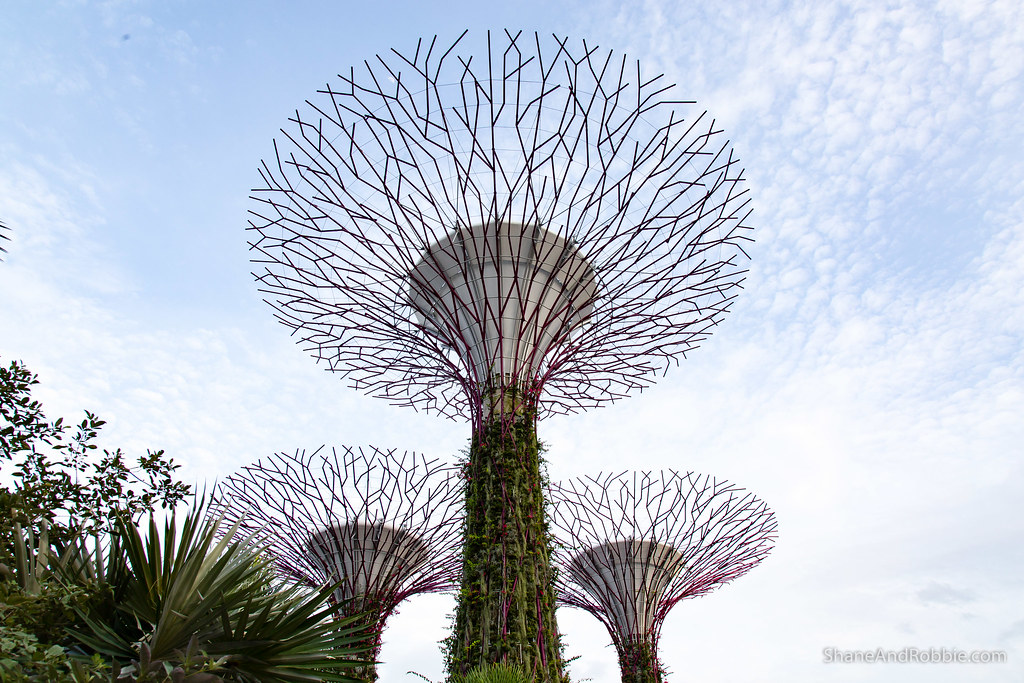 We didn’t go up to the Sky Walk, but had a great time exploring the gardens from ground level. The best part was seeing all the lights come on when the sun set. 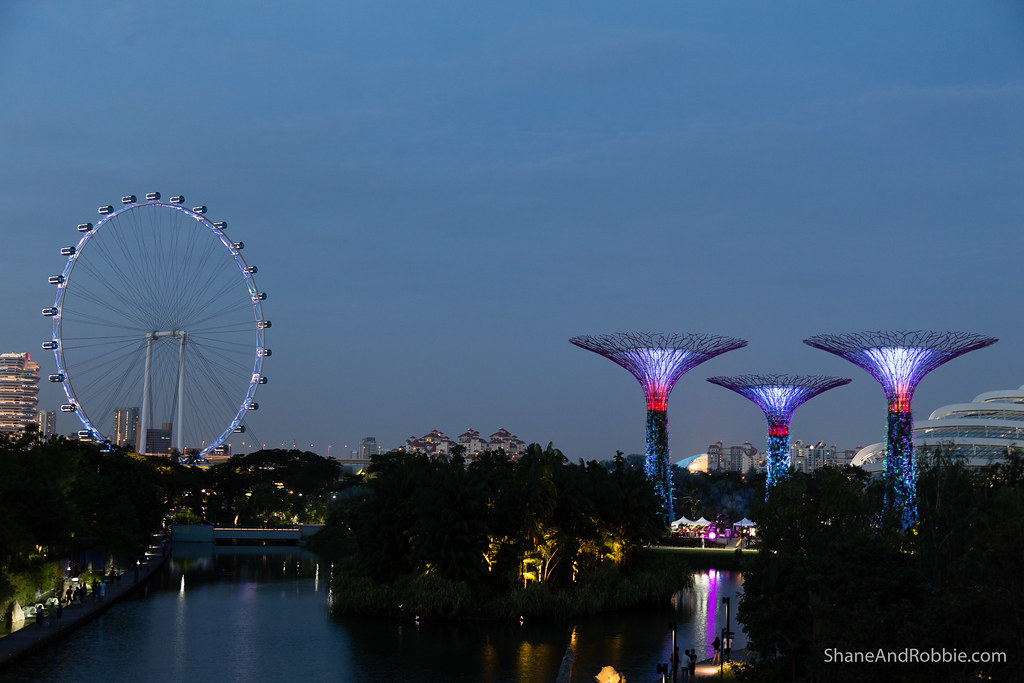 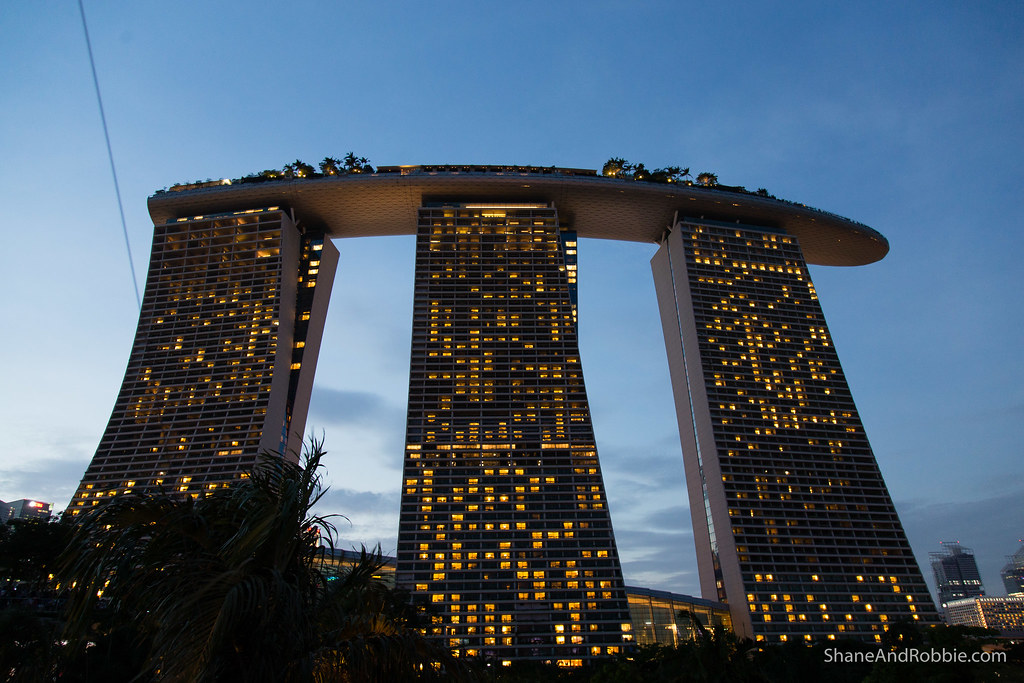 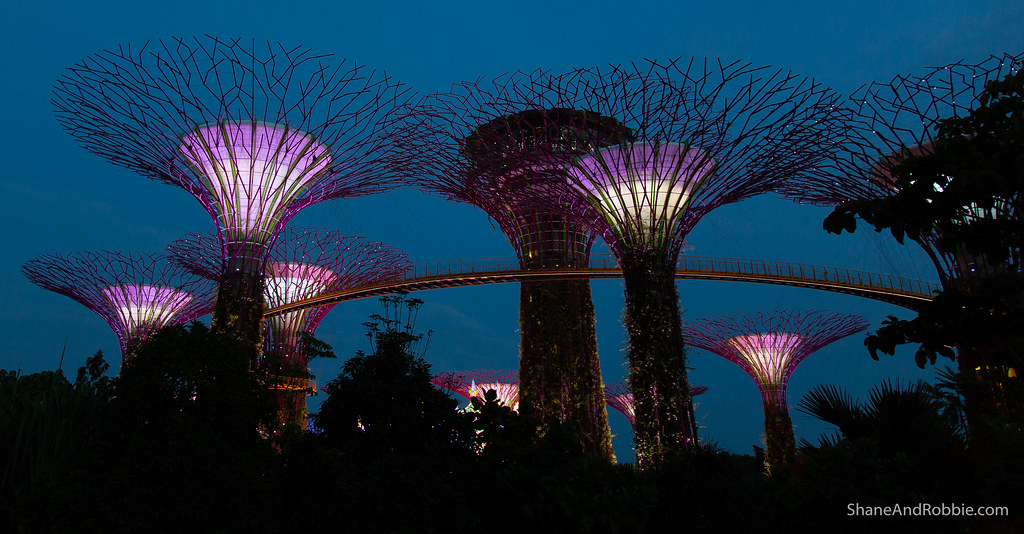 They had a choir singing Christmas carols at Gardens by the Bay this evening so we joined the thousands of locals and tourists in the park and spent the rest of our evening listening to the music. What a great end to our first day in Singapore! 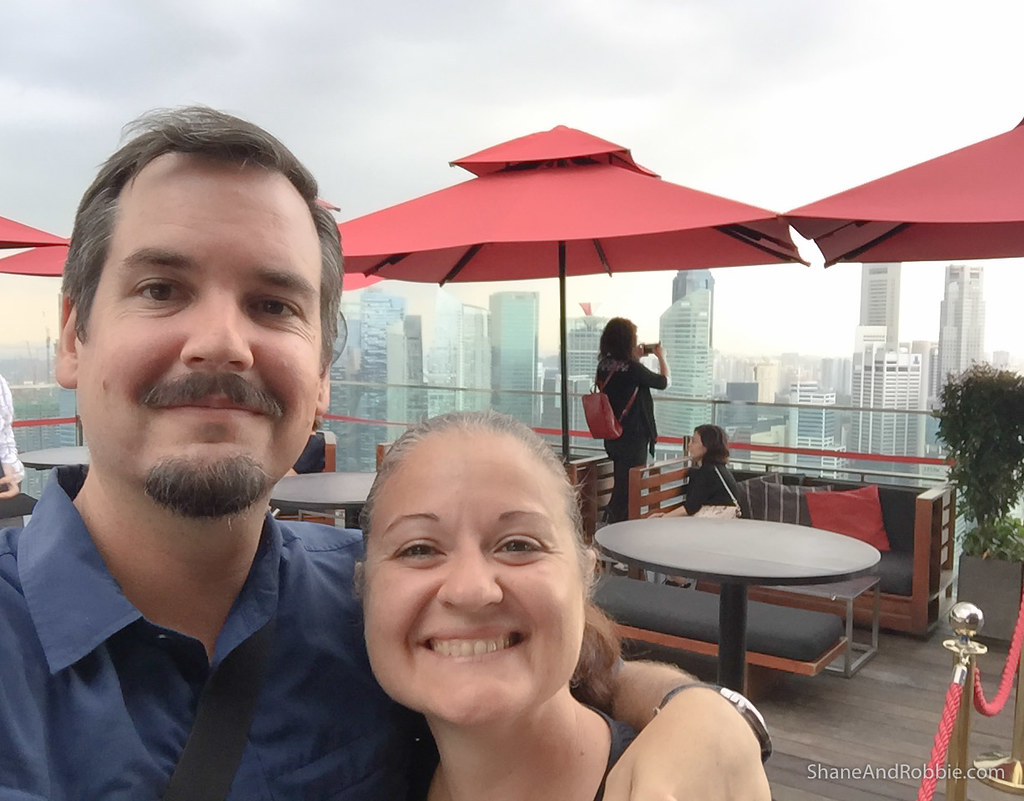