MARVELS OF MINGUN
Rather than spend our last day in Mandalay in the city proper, we decided to take a boat ride across the mighty Irrawaddy River to visit the small township of Mingun. There are a few sights in Mandalay we skipped including the concrete reconstruction of the last royal palace, but talking to other travelers it seemed like these sights were not really highlights, whereas Mingun got rave reviews. Also, Mingun is slightly less touristy and a little further off the beaten path which was definitely a plus for us. So off to Mingun we went! 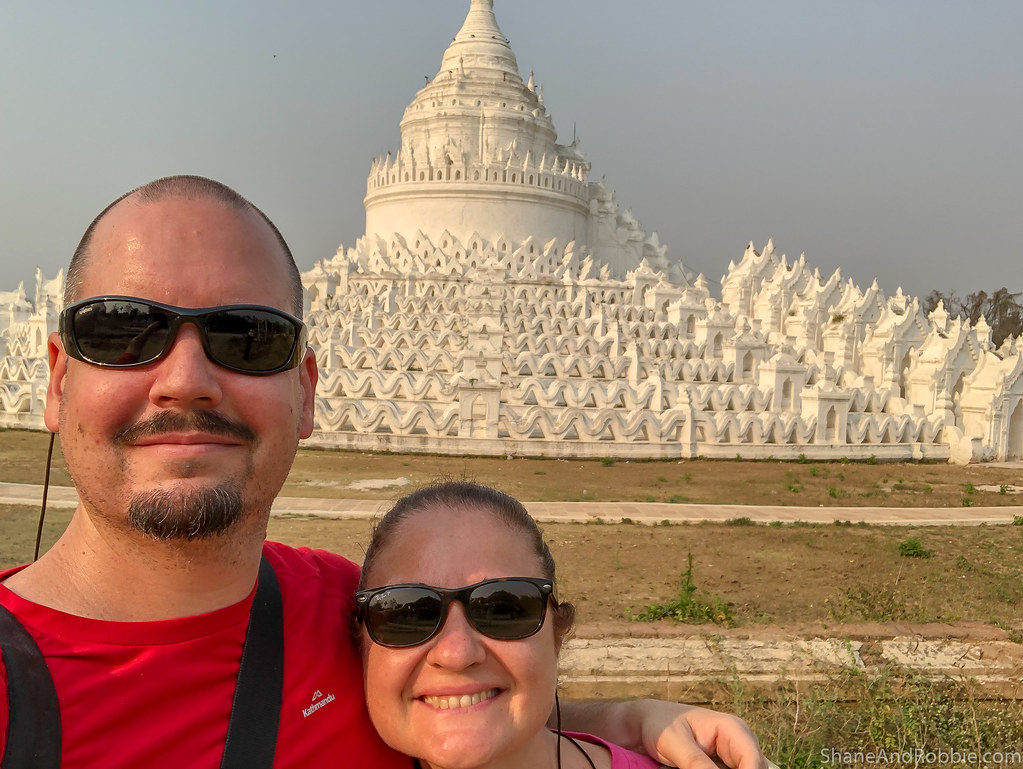 Today’s adventure started with a trip down to the banks of the Irrawaddy River, to find ourselves a boat for the river crossing. The Irrawaddy (or Ayeyarwaddy* in Burmese) River is Myanmar’s lifeblood, flowing from North to South through the length of the country. It is the country’s largest river and its most important commercial waterway. Originating in the highlands of Northern Myanmar (essentially foothills of the Himalayas), the Irrawaddy flows relatively straight North-South before emptying through the Irrawaddy Delta into the Andaman Sea.
*We’ve discovered that many of the English names of places in Myanmar are actually transliterations from Burmese, recorded incorrectly as the British colonialists attempted to understand the local lingo. 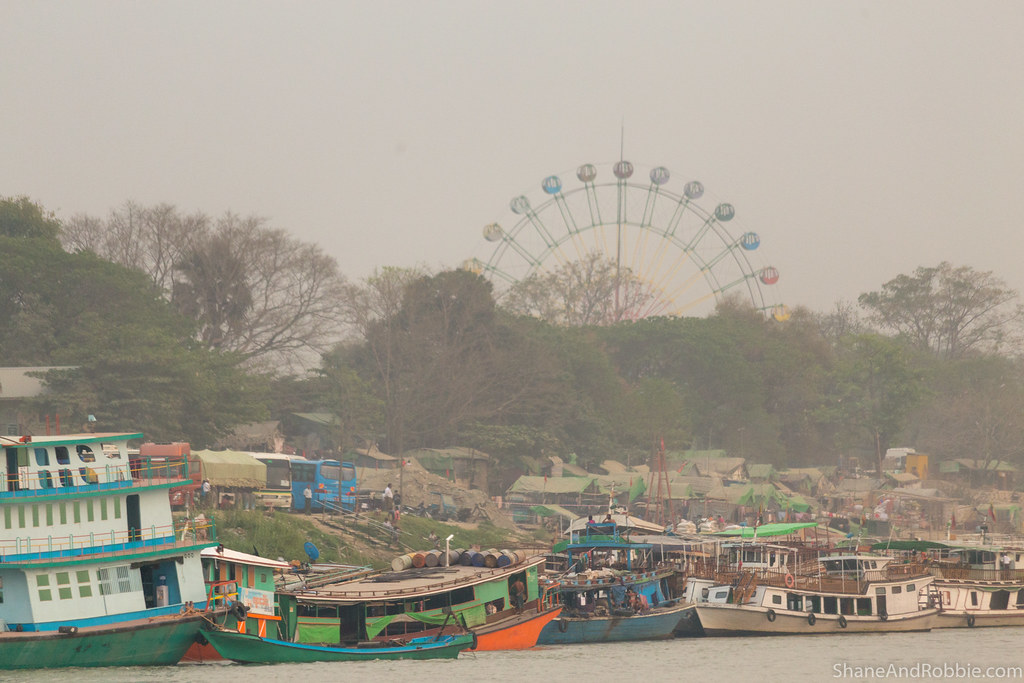 The waters of the Irrwaddy River irrigate Myanmar’s agricultural heartland and the river played a key role during the rule of every Burmese king – all of the country’s royal capitals were once set along its banks. Thousands of temples, stupas and pagodas can still be seen along its great length, and in many ways the Irawaddy is the lifeblood of Myanmar. 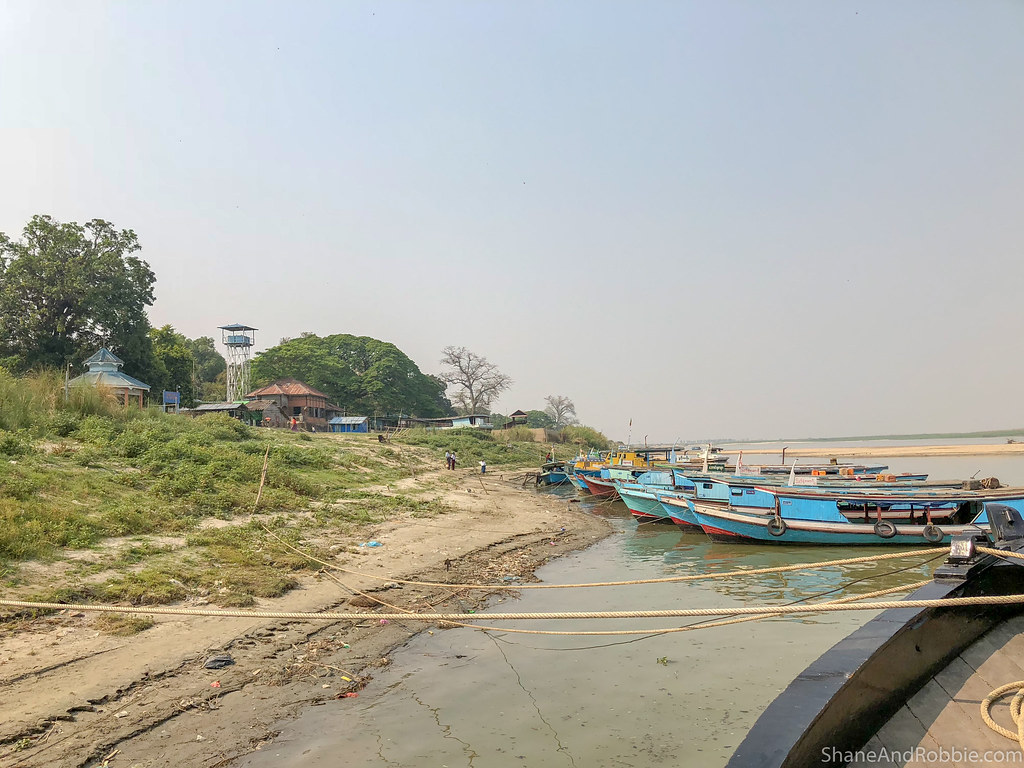 It is this mighty river that Rudyard Kipling was referring to in his poem “The Road to Mandalay” as it was river transport that took colonialists from what was then Rangoon (Yangon) to Mandalay. The river has always been used as a major transport route through the country – Myanmar’s wealth* of teak timber, gold, gems, and oil is still today transported down the Irrawaddy River. The river is a big part of the reasons roads and the rail system in this country are as poor as they are; they don’t need roads and a rail system to carry goods – they have the river!
*We had no idea how incredibly resource-rich Myanmar is. Unfortunately much of the profit from the country’s mines and timber-harvesting areas go straight into the pockets of corrupt senior officials, with little trickling down to help the people of Asia’s poorest nation. The environmental damage being wreaked in Myanmar at the hands of greedy military cronies is something we’ve read about too. It is horrifying to think this beautiful, incredible country could be ruined due to the choices made by a tiny minority. We can only hope international guidance and the emerging middle class help keep the worst damage at bay, preserving at least some of the wilderness areas and natural resources of Myanmar. 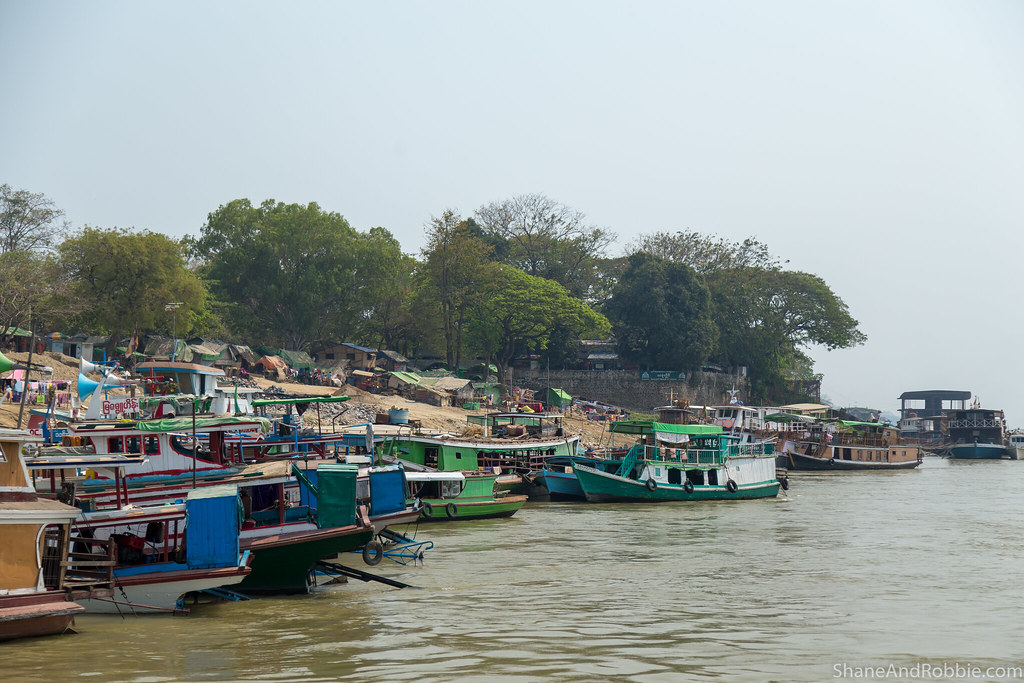 One of the unfortunate consequences of modernisation and the poverty of Myanmar is that many of the boats that travel the river are very old, very noisy, and very environmentally unfriendly. The result is that, in places, the Irrawaddy River is increasingly polluted and clogged with boat traffic. The impact on the people of Myanmar may only become apparent in coming years as the river they rely on for food, water, and sanitation becomes a toxic influence in their lives. Along the river bank today, for example, we saw a woman washing clothes in the river, amidst the colourful sheen of petrochemicals. This is the same water she, and millions like her, use to wash themselves, to water their crops, and to hydrate their animals. It’s an unfurling tragedy the likes of which we’ve not seen since we were in China. 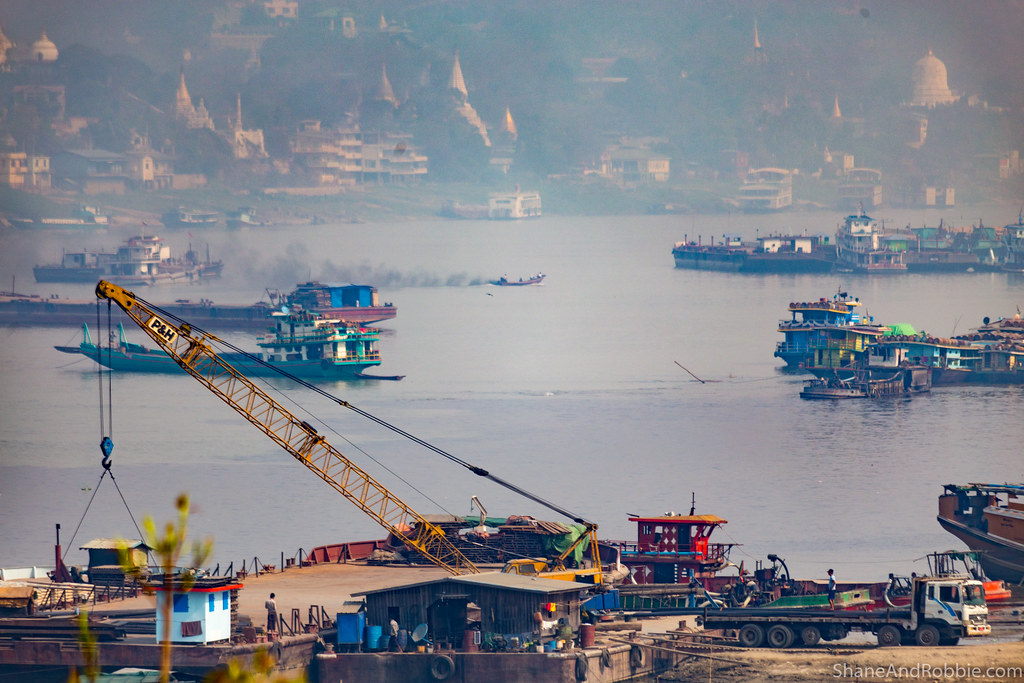 A few kilometres upstream from the chaos of Mandalay, however, the river traffic quickly thinned out and the whole experience became far more pleasant. Our boat chugged along the Irrawaddy and sat enjoying the cooling breeze coming off the water, watching life go by along the river. The only challenging part of the whole boat ride was getting on and off the boat; it’s currently the hot/dry season* so the river level is very low and the only way on and off the boat was via a very narrow wooden plank. Luckily the crew held a bamboo pole in place to act as a handrail! 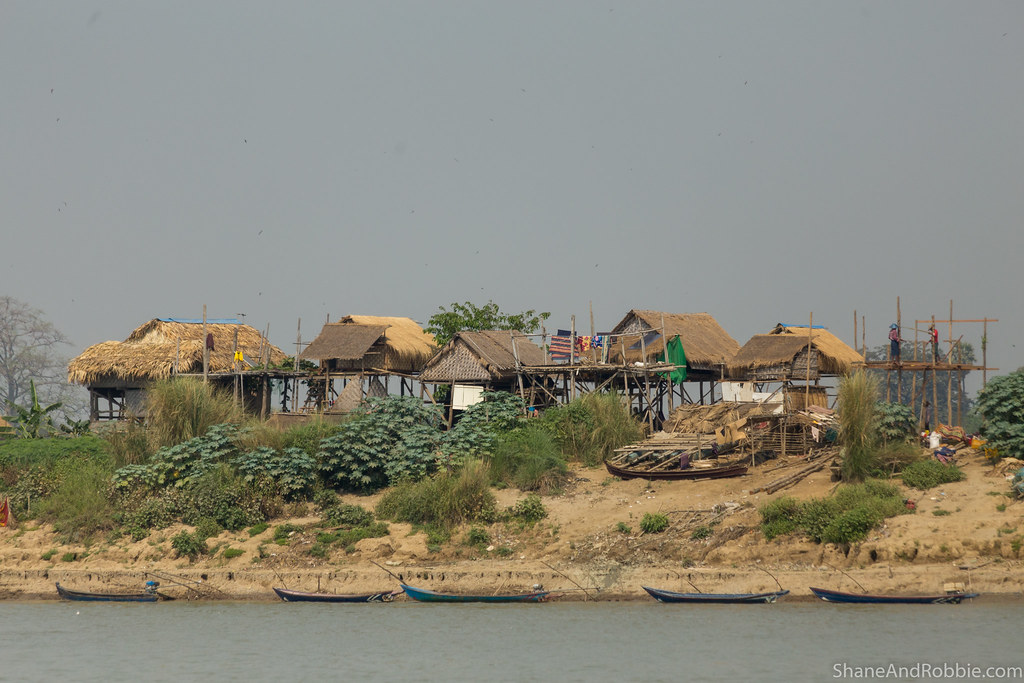 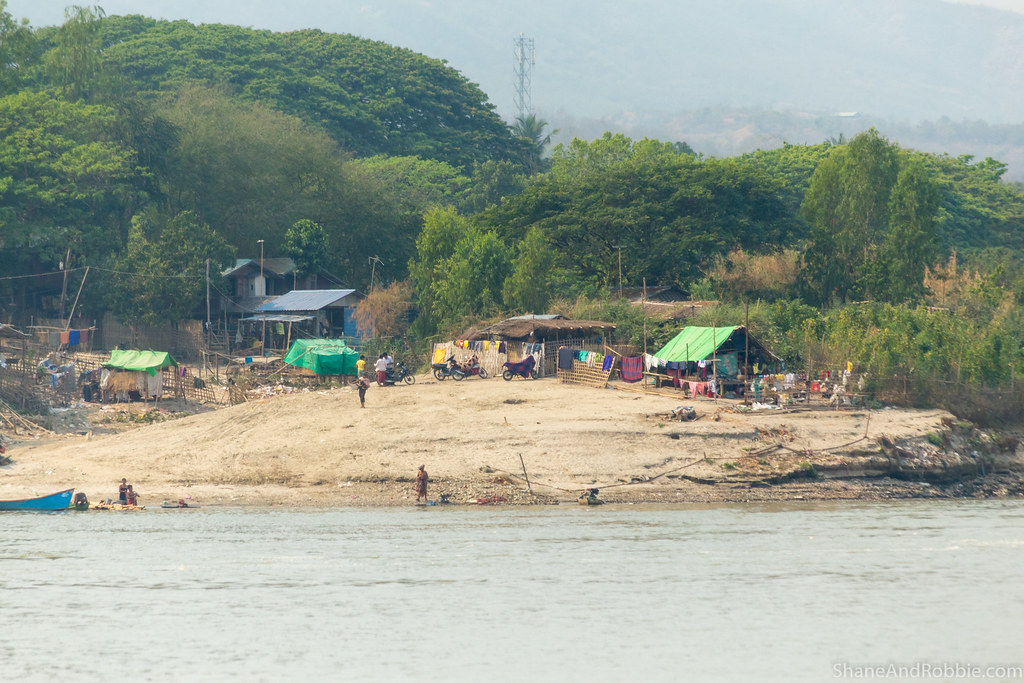 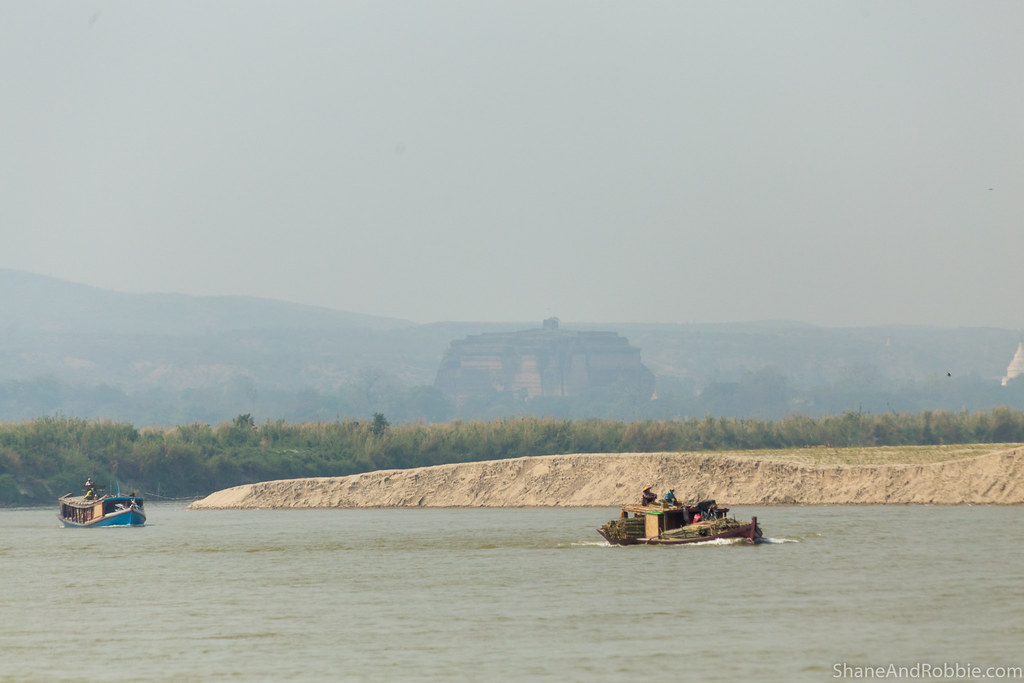 Once in Mingun we set off for a walking tour of the local sights, stopping to enjoy those tiny slices of beauty and serenity that form part of everyday life. 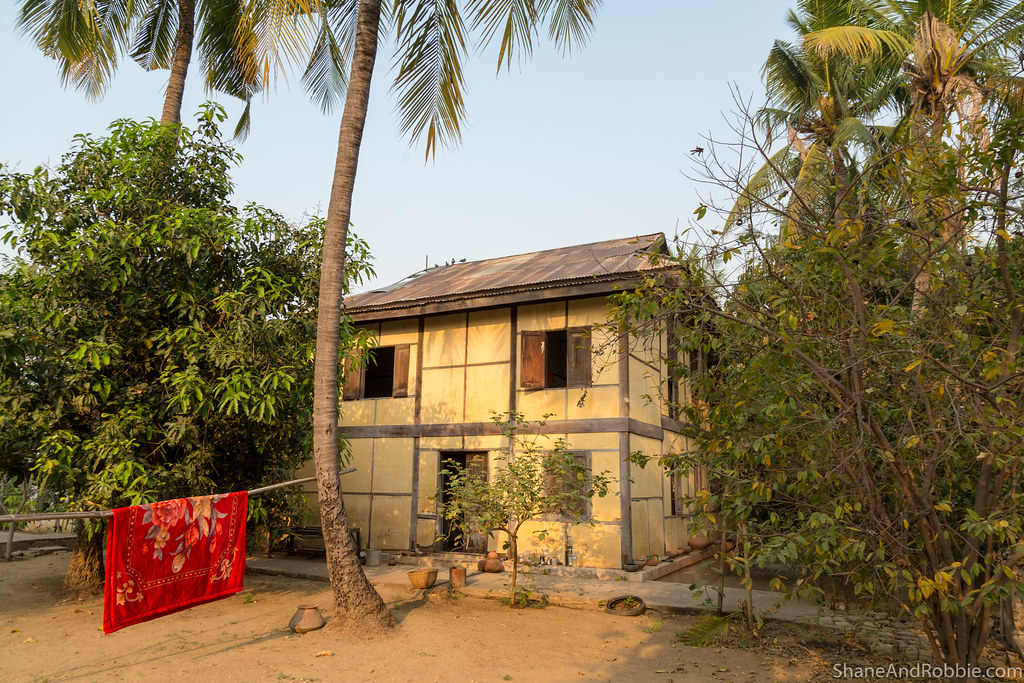 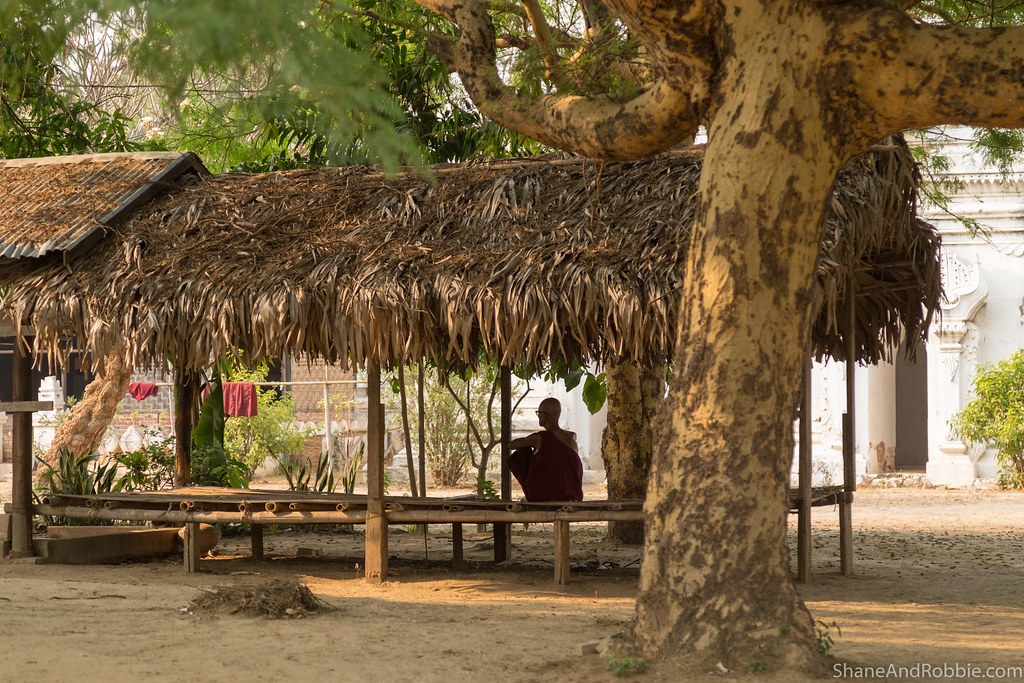 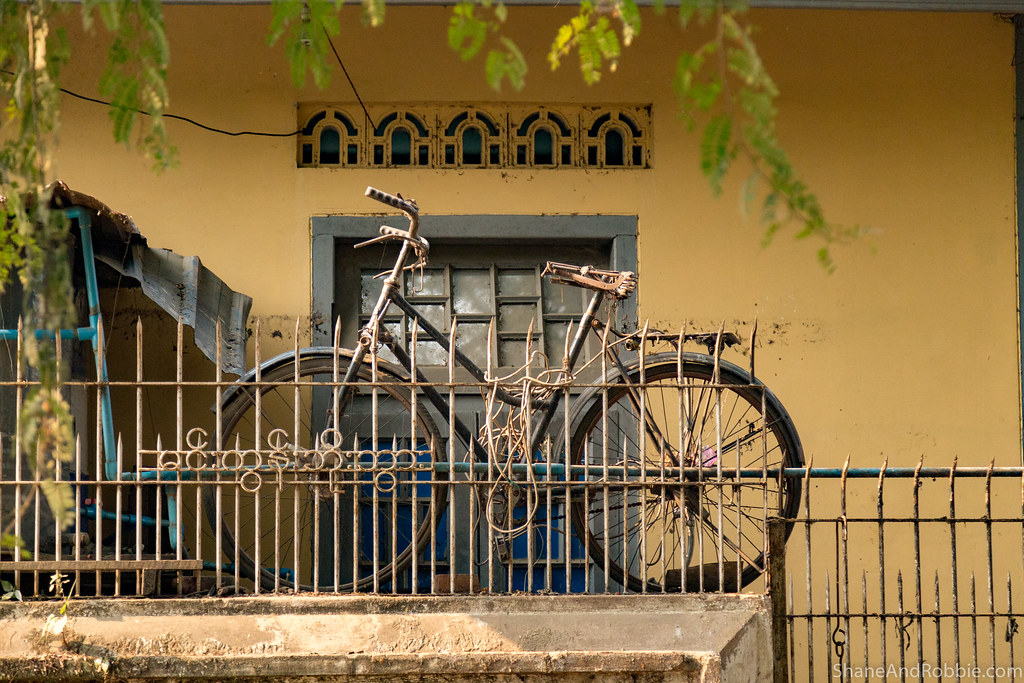 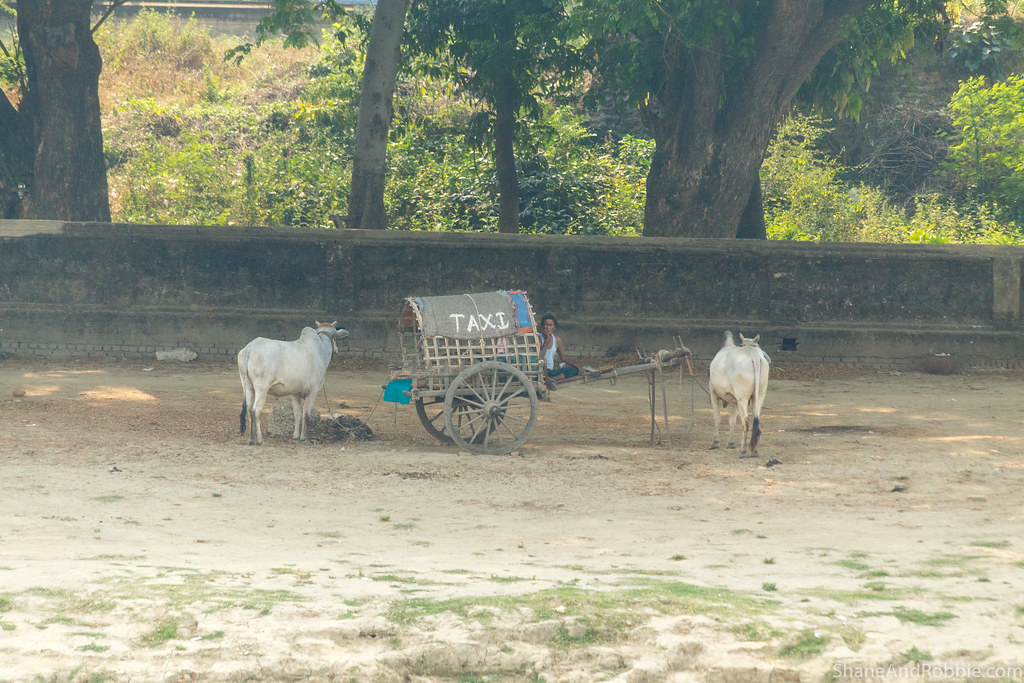 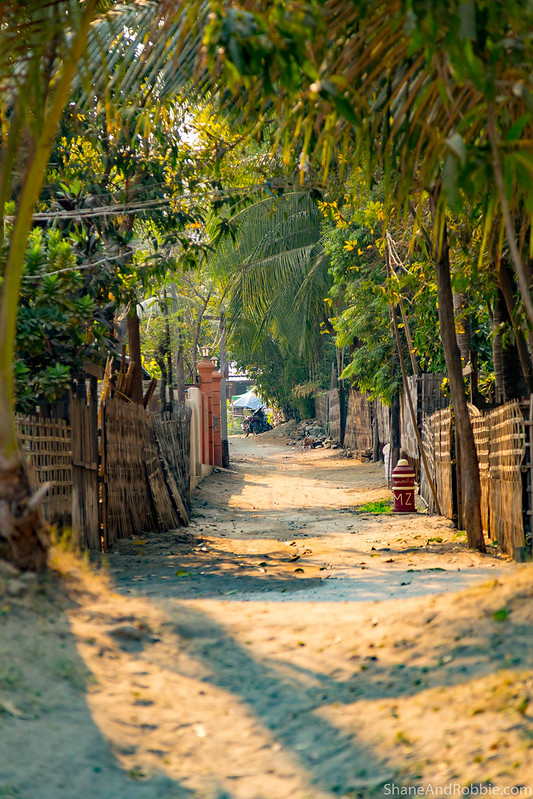 First notable sight of the day was the Mingun Bell, a 90,718kg bronze clanger that is uncracked and in good ringing condition (as we heard whilst we were there). King Bodawpaya had this gigantic bell cast in 1810 to go with his huge stupa, Mingun Pahtodawgyi (which we visited later in the day). The bell was said to have been cast on the opposite side of the river and was transported by using two boats, which after crossing the river, proceeded up two specially built canals. The canals were then dammed and the bell was lifted by raising the water level by the addition of earth into the blocked canal. In this way the bell was originally suspended. Today it’s a popular tourist attraction for local Burmese tourists visiting the Mandalay region, and for a few foreigners too. 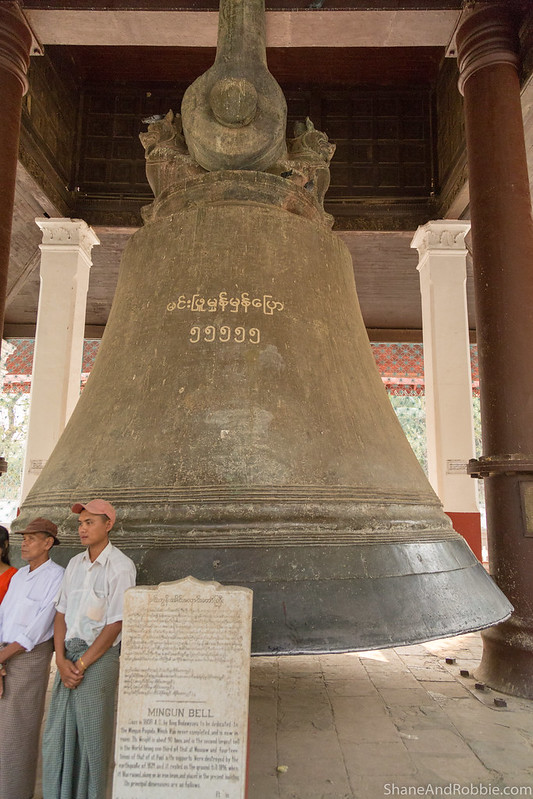 We then went to see the Hsinbyume Pagoda, also known as Mya Thein Tan Pagoda. This cake-like, white construction was built in 1816 by Prince Bagyidaw. It is dedicated to the memory of his first love and consort, Princess Hsinbyume who had died in childbirth in 1812. The pagoda is modeled on the physical description of the Buddhist mythological mountain, Mount Meru, and makes for a very pretty photo stop. The climb up the steep stairs to the top also gave us great views over Mingun. 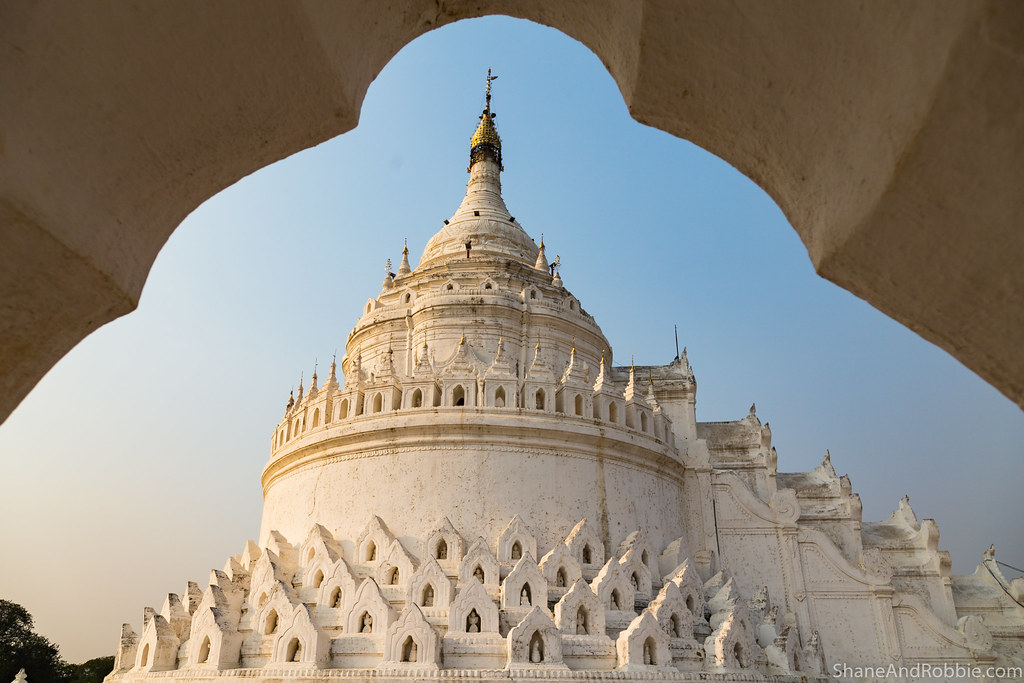 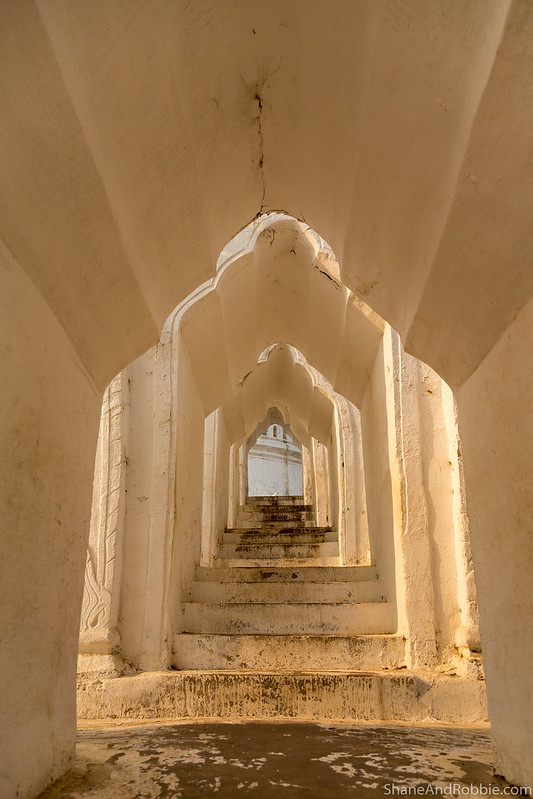 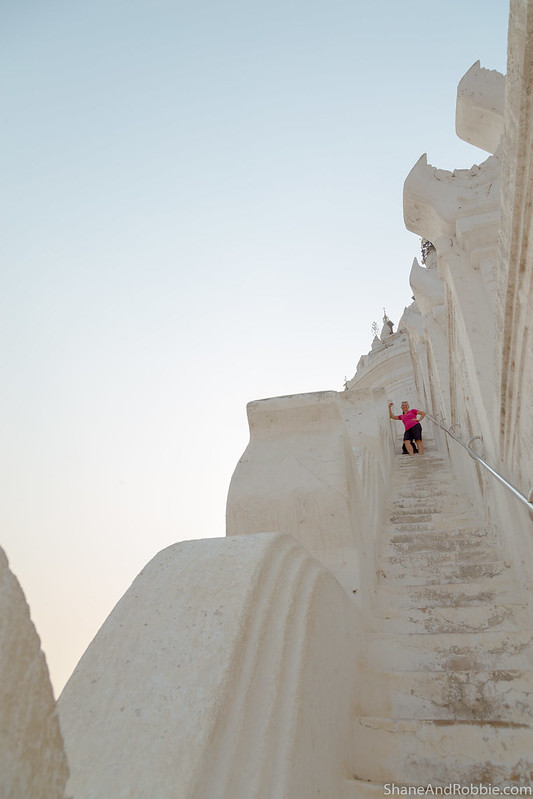 Last but certainly not least we went to see the Mingun Pahtodawgyi. This stupa, started by King Bodawpaya in 1790, was intended to be the world’s largest stupa. Bodawpaya used thousands of prisoners of war from his expansionist campaigns to build the stupa and the original plans called for it to be 150m high, but construction was never complete as the king died before it was finished. The building only ever attained a height of 50m, and when an earthquake struck the region in 1839, even this was diminished as the poorly constructed edifice toppled. Today it’s more like the world’s biggest pile of bricks than the magnificent monument King Bodawpaya probably envisaged! 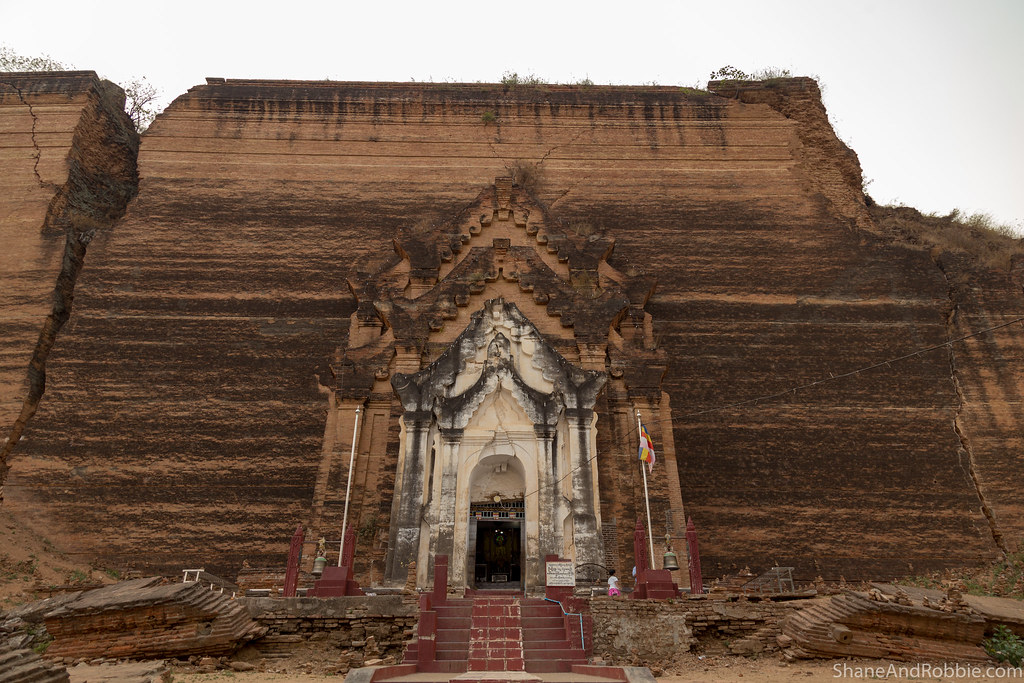 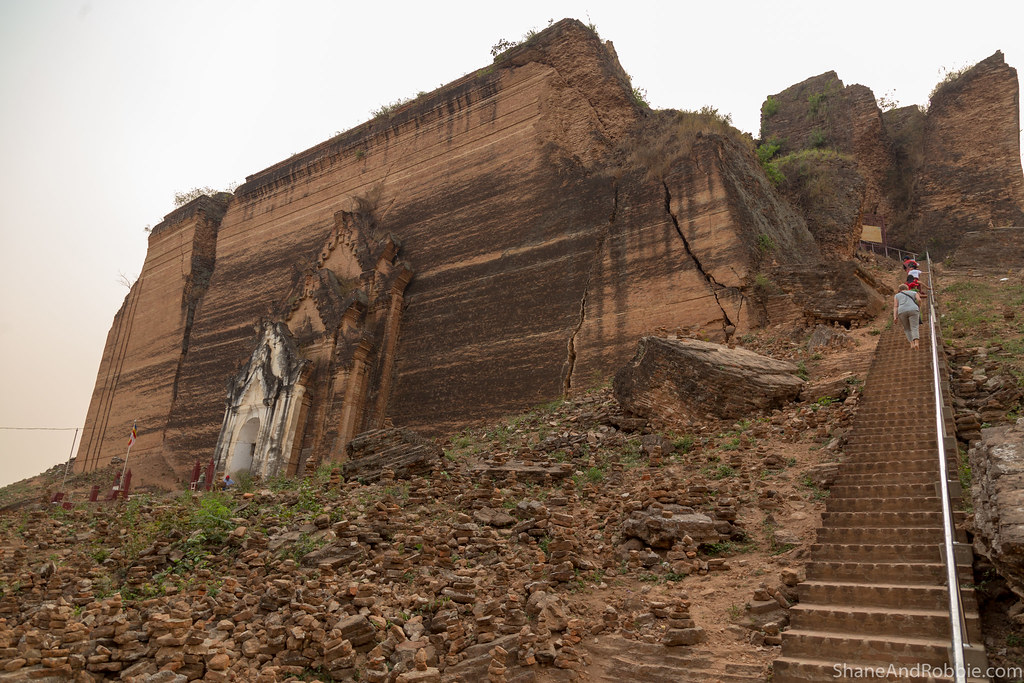 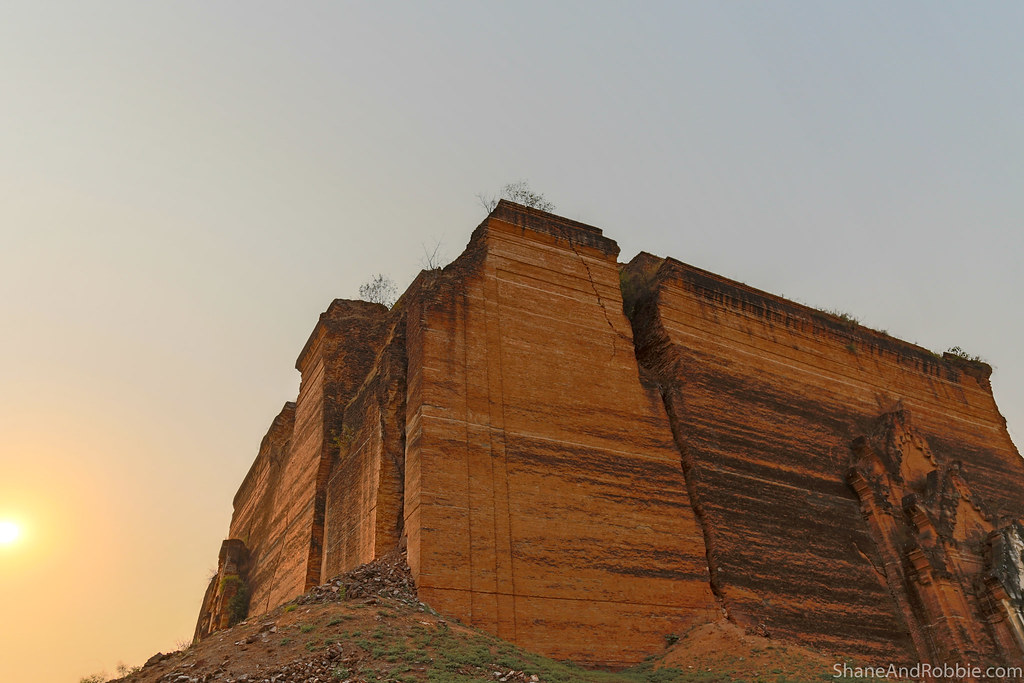 Walking back from the Mingun Pahtodawgyi we saw a man carrying a long bamboo ladder. Asking around we discovered he had been harvesting palm fruit from the Toddy or Palmyra Palm. 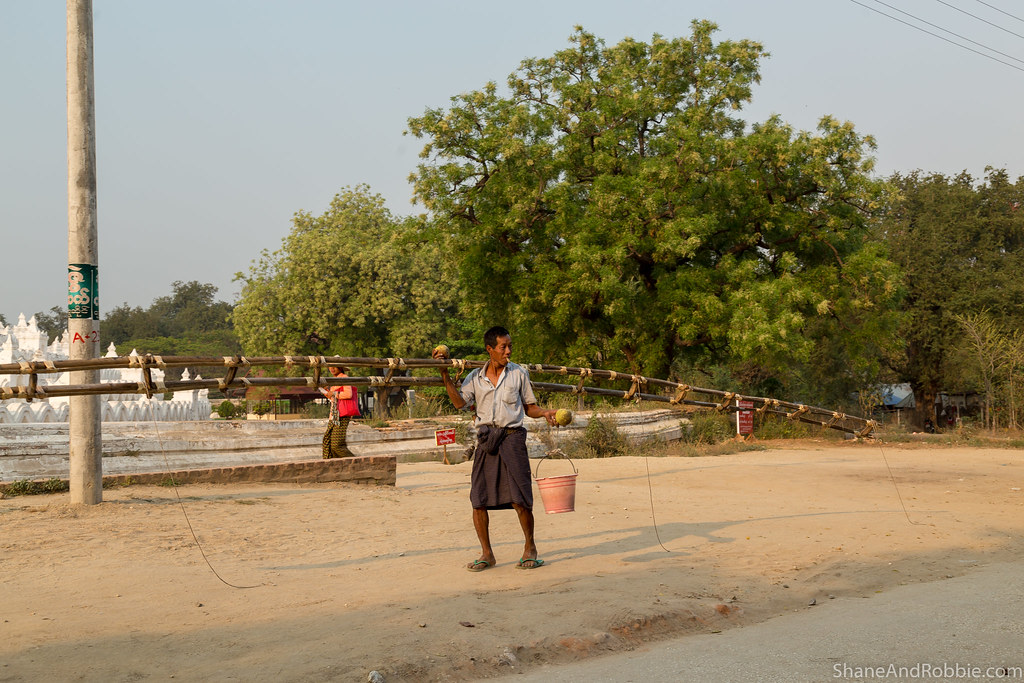 The sweet sap of the Toddy Palm and is used in preparation of jaggery and an almost lethal plam-sugar-based alcoholic beverage called arrack. Jaggery is a sweet prepared from Toddy Palm fruit, sugar cane juice, or date or palm sap. It’s unrefined and super-sweet, often served after meals here either alone or mixed with other ingredients, such as peanuts or coconut, as a sort of candy. We saw how they make jaggery and arrack and it involves squeezing the palm fruit or sugar cane, and boiling the juice for DAYS. The boiled juice gradually thickens until it becomes a thick, brown syrup which is then poured, spread, dried, and cut into bite-sized chunks. 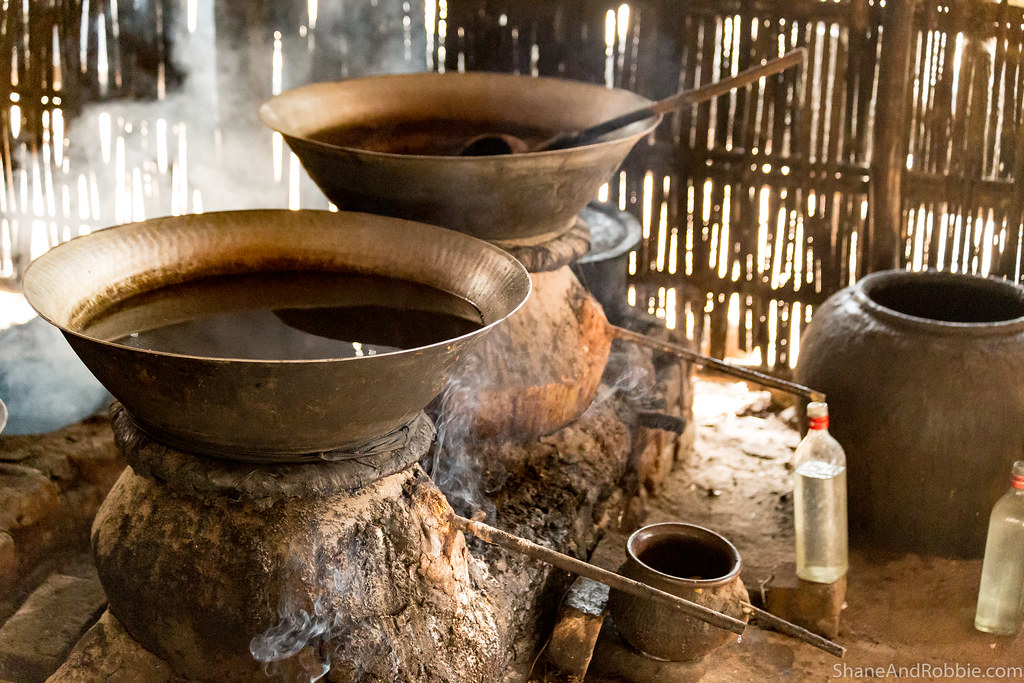 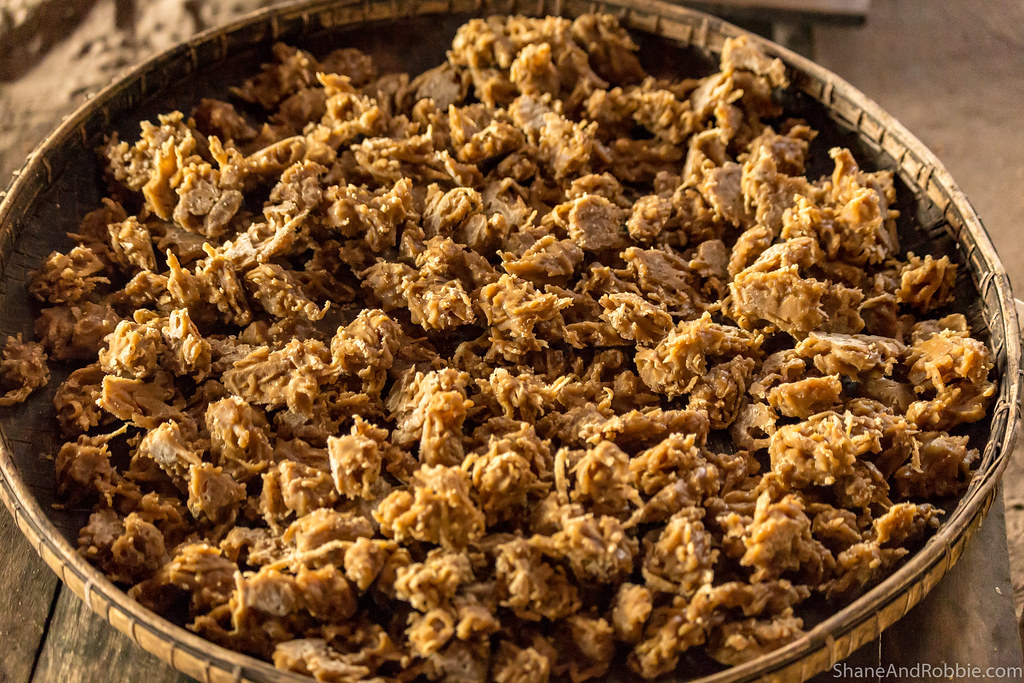 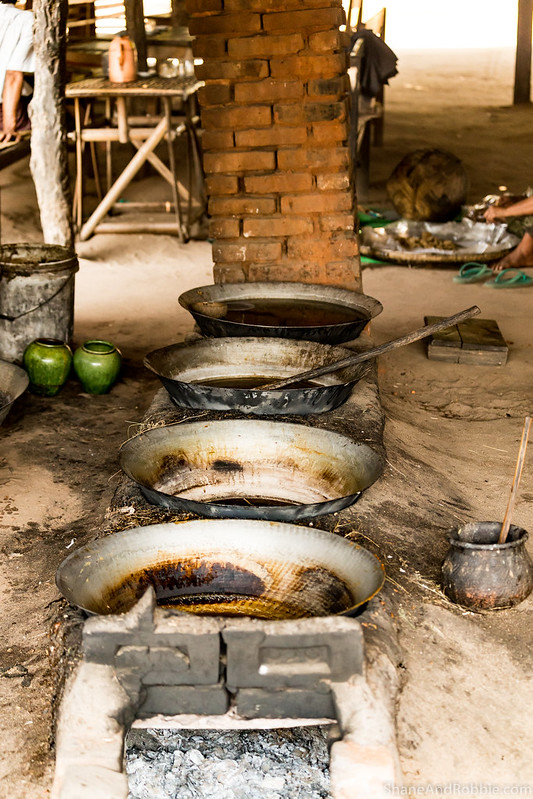 To make arrack they ferment the juice in open pots, which bubble and fizz and definitely do not look appealing. The end result in like rocket fuel and not for the feint hearted! 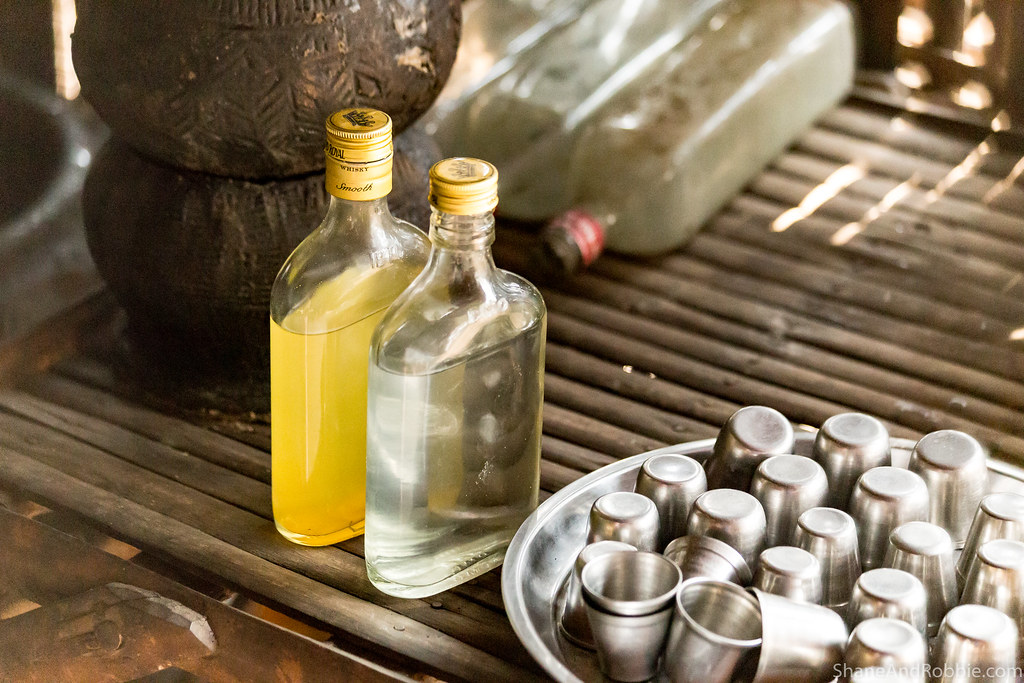 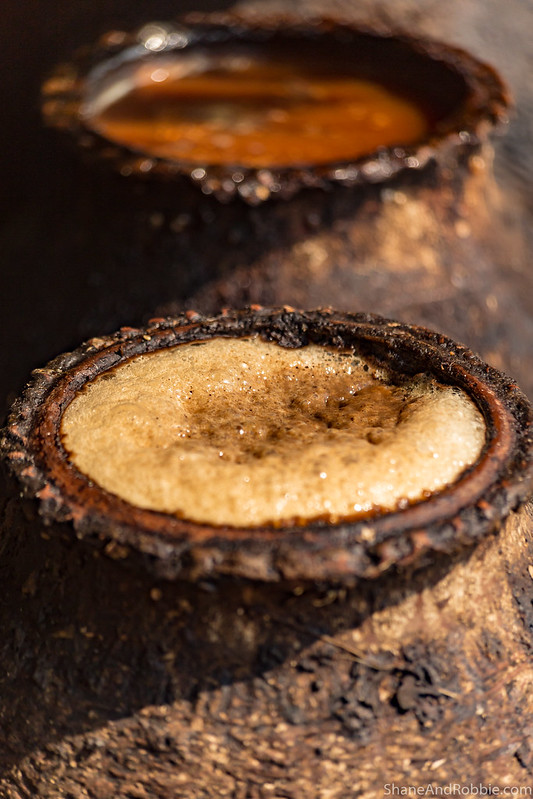 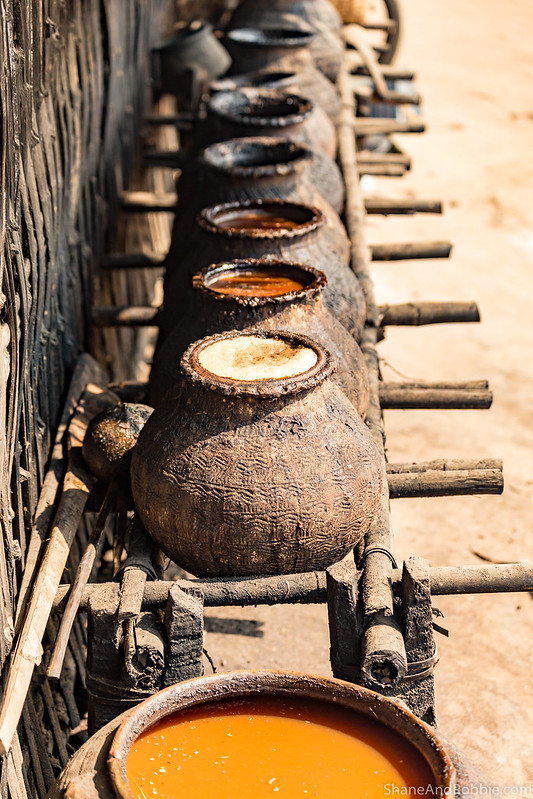 After a great day of exploring we had dinner down by the river and enjoyed a beautiful sunset on the Irrawaddy River. Over dinner we reflected on how incredibly warm and welcoming the Burmese people have been. There is a spirit of hospitality and inherent friendliness in the people here that is not put on for the sake of tourism, or a mask for show. The nation’s forced isolation* means that tourists are still a novelty, and the people of Myanmar are definitely proving to be the highlight of this trip for us.
*In 1948, Burma gained its independence from Britain, changed its name to Myanmar, closed its borders and essentially slipped off the radar of the outside world. 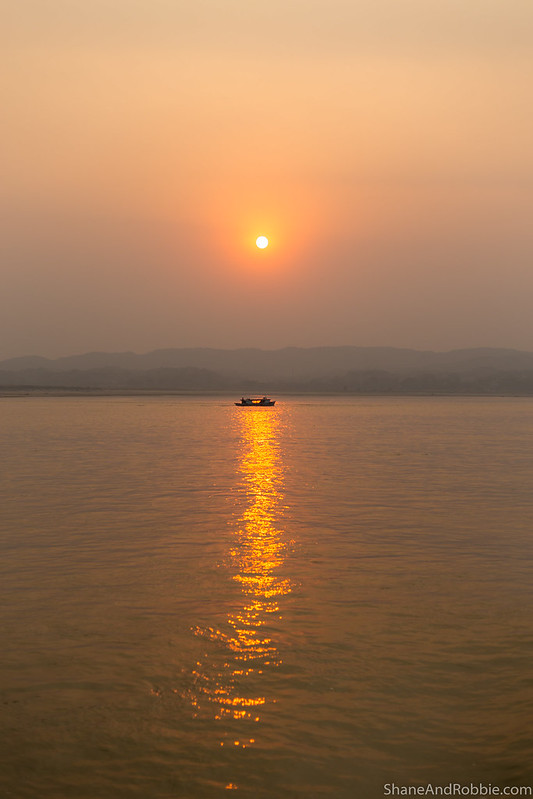