SUNSET AT GOLDEN ROCK
The Golden Rock, or Kyaiktiyo, is one of the most important religious sites in Myanmar. This precariously perched boulder has been welcoming Buddhist pilgrims from all over the world for over 2,500 years. Legend has it that the stone is held in place by a strand of Buddha’s hair, which is why people come here to pray and add golden leaf to the rock. As we found out today, the end result is something quite spectacular, especially at sunset when the light brings out the best of the Kyaiktiyo’s colours and paints the surrounding landscape in golden light. 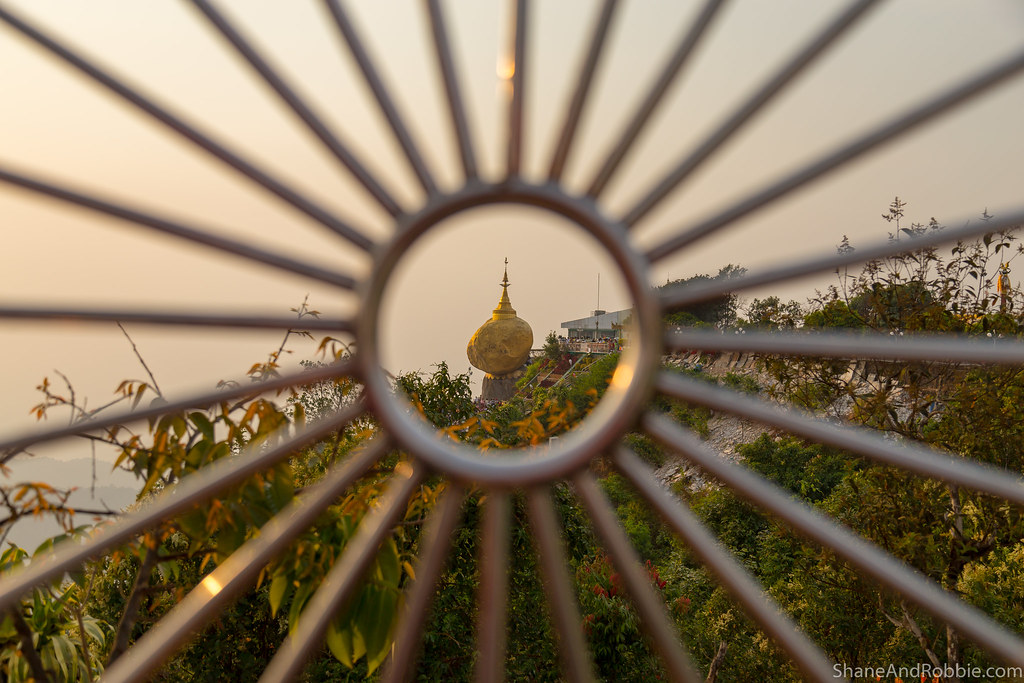 Bidding Inle Lake farewell, we flew out of Heho Airport this morning, bound once again for Yangon. At Yangon Airport our pre-arranged transport vehicle* picked us up around noon and we headed North-East, out of the city. It took about 2 hours for us to be free of the city and reach the countryside of Mon State. Gradually the traffic and concrete buildings gave way to fields and trees. By the middle of the afternoon, we could see hills on the horizon, and soon we were in Kinpun, the town at the base of the Mount Kyaiktiyo.
*You can get from Yangon to Kyaiktiyo by bus but that means leaving Yangon at 8am, and then getting back the following evening, effectively taking away 2 full days to visit the Golden Rock. Given the short time we have here, we hired a private driver for the trip instead. It’s the kind of thing that would be exorbitantly expensive in most countries, but in Myanmar it’s not unfeasible. Not only was it quicker, but having our own car also gave us the option to stop and take photos along the way whenever we wanted to. 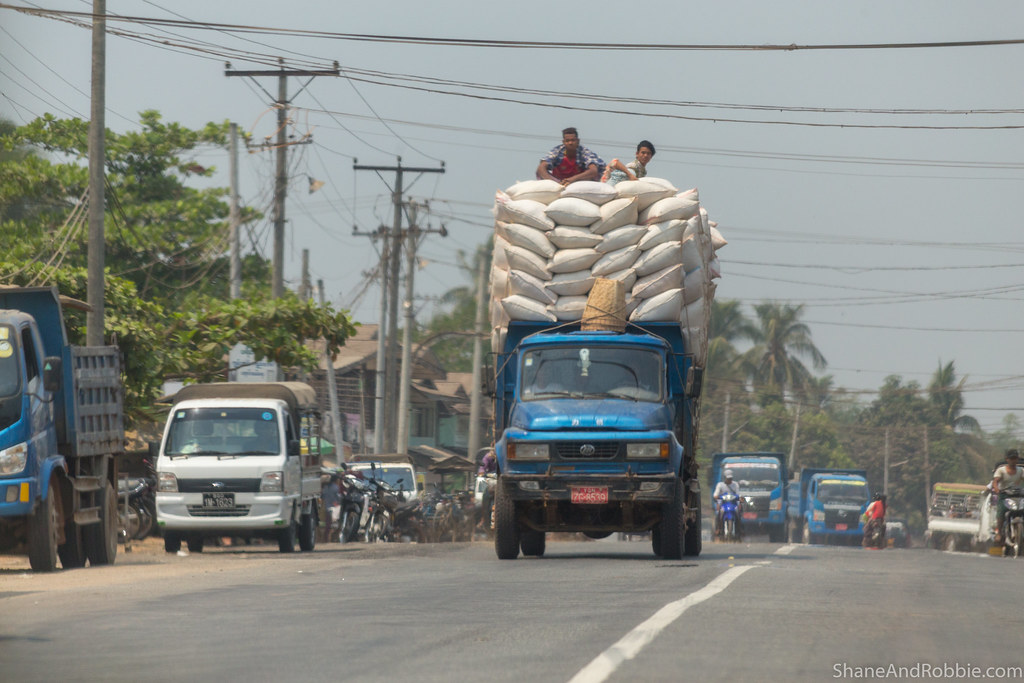 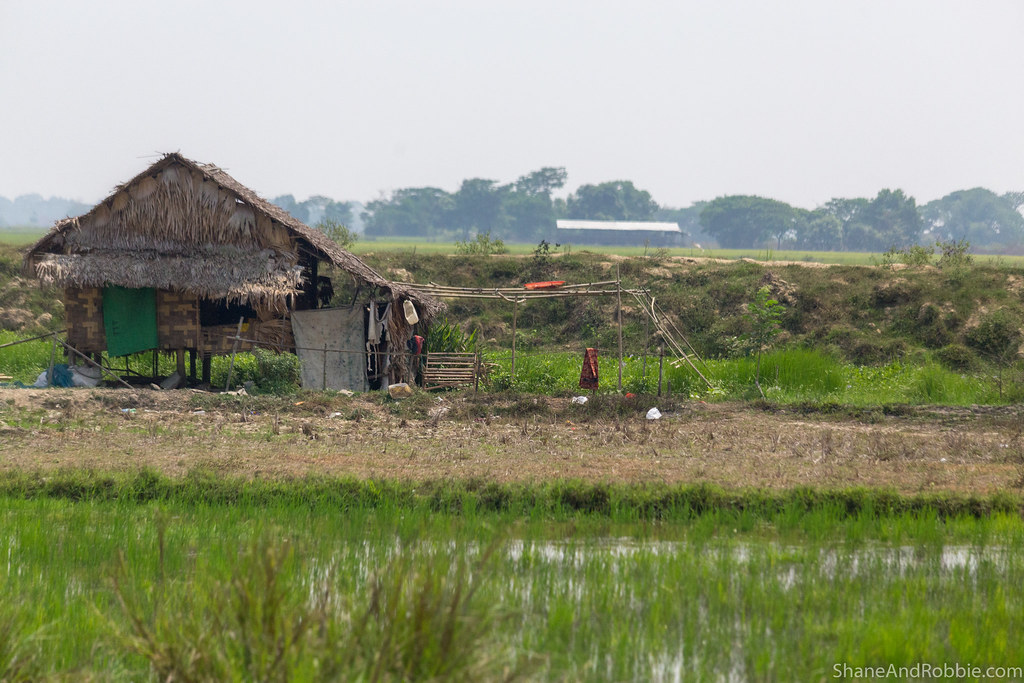 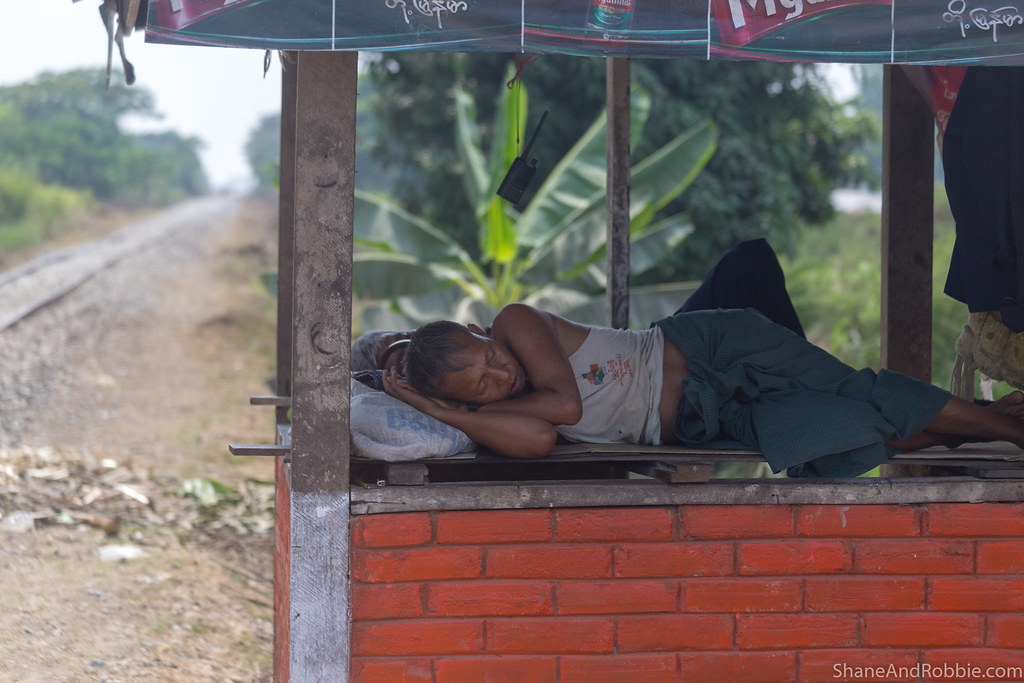 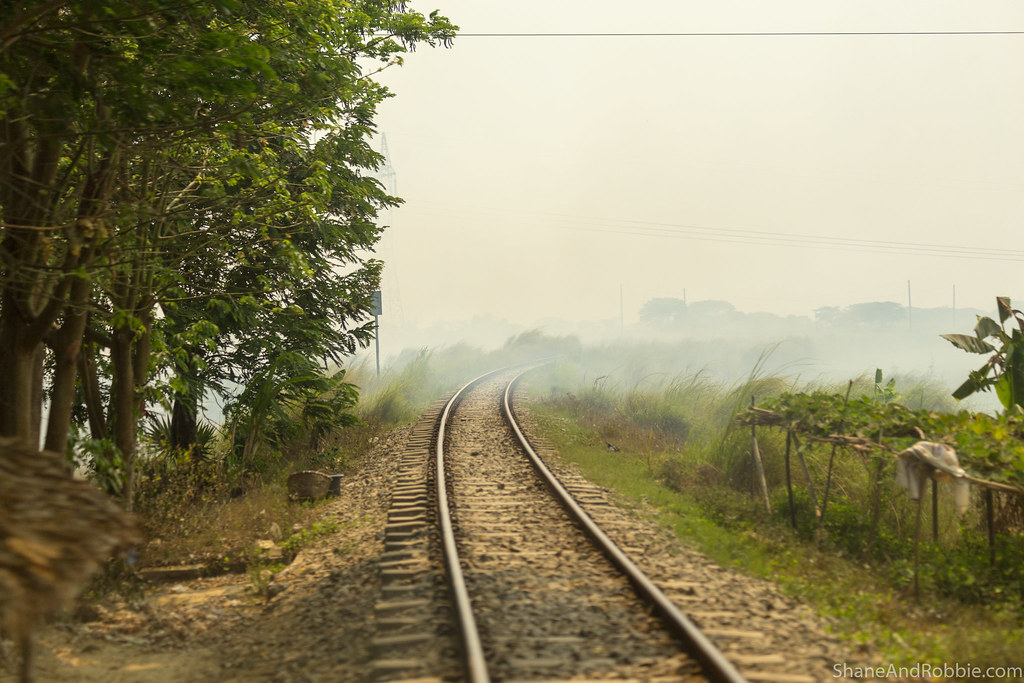 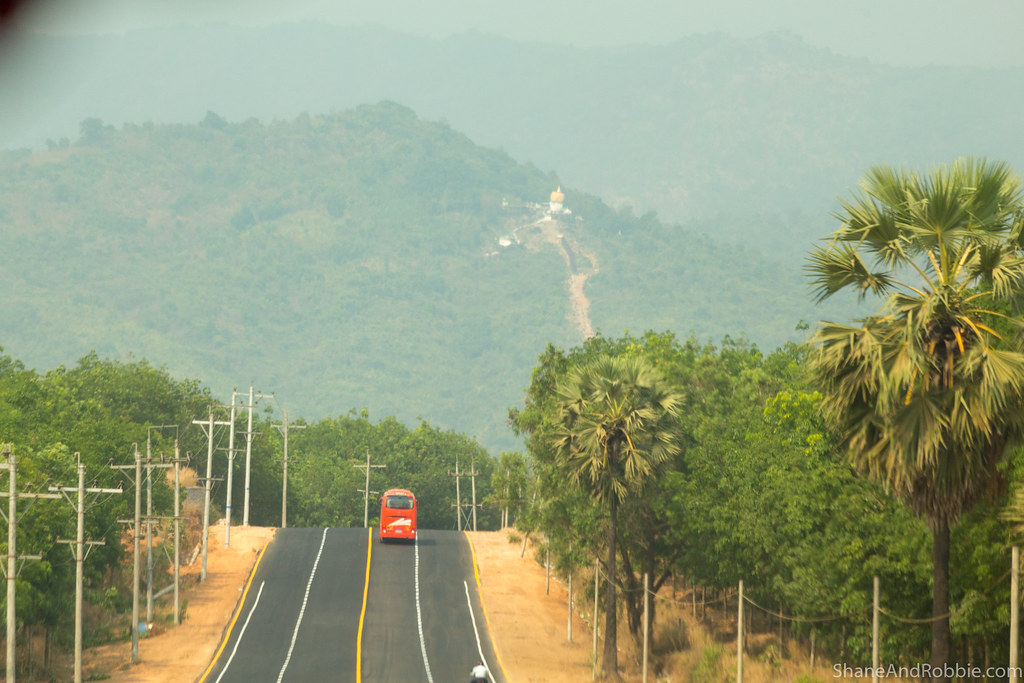 Kinpun itself was a small, nondescript town that has flourished thanks to the 1 million travellers who visit Golden Rock every year (only 100,000 of which are foriegners from outside Myanmar, by the way). We didn’t linger there, but instead bid our driver and comfortable car farewell for the day, and made straight for the truck station. Yes, truck station. Because there’s only 2 ways to travel the last 10km up to the Golden Rock:
1. Walk – This is the preferred method for many true pilgrims as the steep ascent is said to help put one in a meditative state of mind.
2. By truck – These large open air trucks are fitted out with 8 narrow wooden bench seats that they pack with visitors in 10-deep. Bearing in mind that the average Burmese person is tiny compared to most Caucasians, so 8 locals + 2 of us on 1 bench made for a seriously intimate journey… 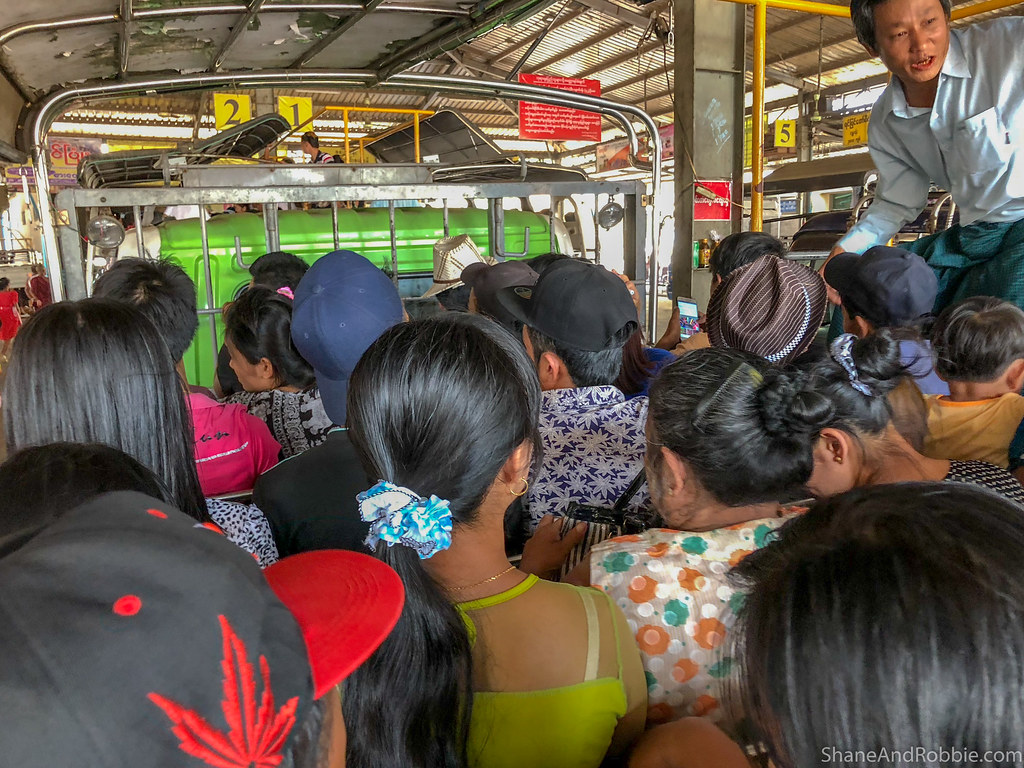 We jostled and fought our way onto a truck (the system: first in, first served – not the place to be shy or retiring), and then waited for all the other 10 or so trucks to fill with eager passengers. After what seemed like an age, we were finally off! The ride to the top was like being on a roller coaster. The road was steep and vertiginous, but this didn’t stop our driver hurtling up and around the bends at break-neck speed. It was certainly an interesting journey… Even amidst all the chaos, however, we couldn’t help but marvel at the beautiful scenery on the journey up. 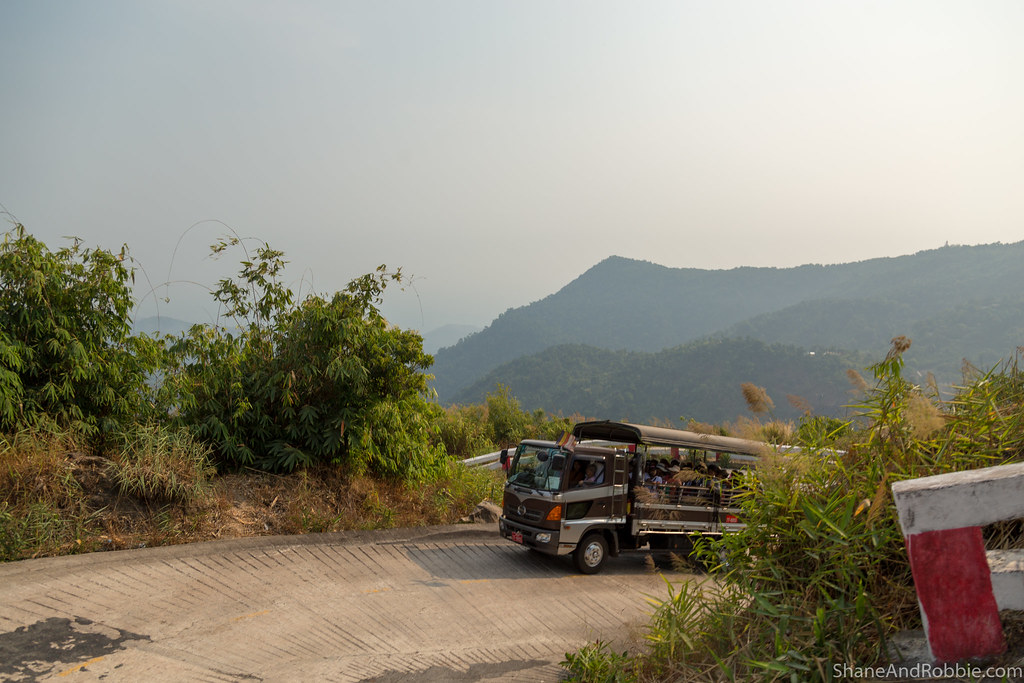 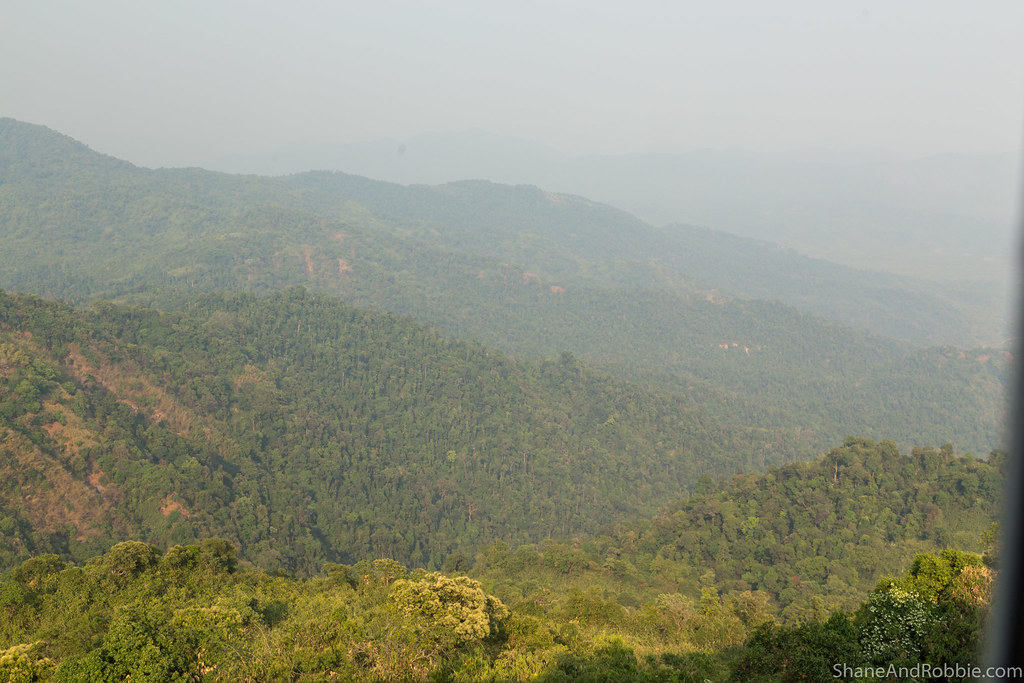 It took about 40 minutes to reach the top, and then we hit the chaos of the truck station at the top…. Made Kinpun seem quiet and sedate by comparison! Men, women, and children were jumping off the trucks to hurry up to the main temple; merchants jostled to get our attention and sell us food and trinkets; and porters sought out customers who might need help transporting their belongings up the last kilometre or so of the steep hillside. The frenetic energy of the place was incredible and a little overwhelming. Not at all what we expected from one of the holiest sites in Myanmar! 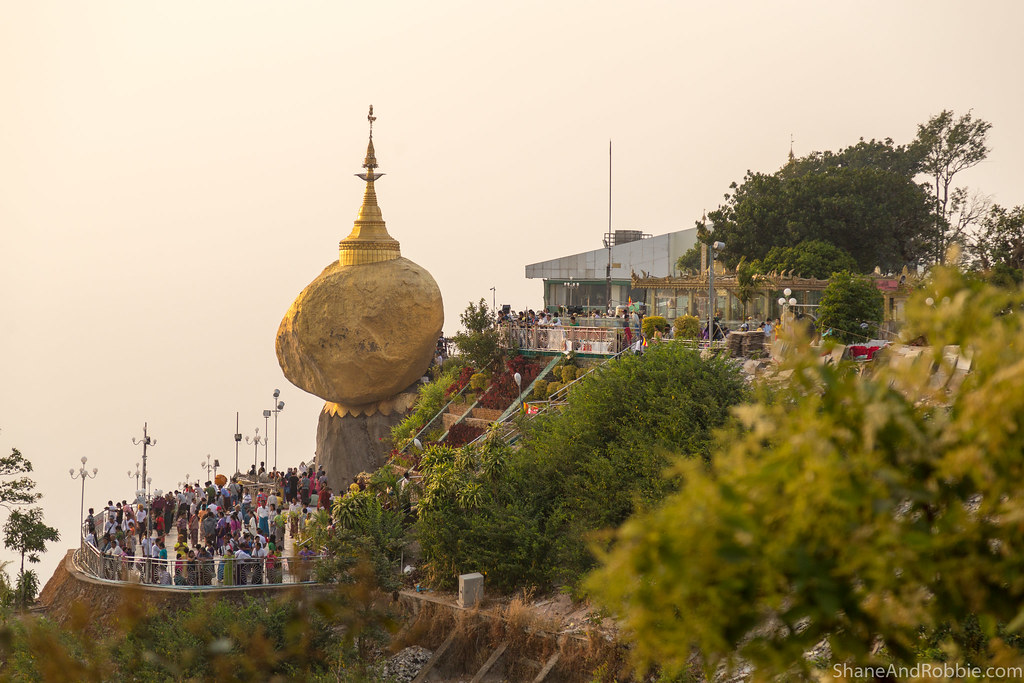 We managed to fight our way out of the crowd and made our way up to our accommodation for the night*. Dropping our stuff off at the hotel we then joined the general throng and walked to the temple site proper. As in all religious sites in Myanmar, we had to remove our shoes but luckily the vast area of the Golden Rock temple complex was all paved and relatively clean. On the journey up to the apex of Mount Kyaiktiyo we passed numerous large family groups all carrying bedding, tents, food, and laughing and chatting happily. We later found out that this is because many visitors travel from far away to see the Golden Rock and stay overnight on the mountain-top. They set up camp anywhere and everywhere around the central temple area, sharing food on communal bamboo mats, and creating an an incredible scene that was more akin to a festival than a holy site! There were a few genuine pilgrims, however, and numerous Buddhist monks and nuns here to pay their respects to the Golden Rock.
*There is 1 hotel on the actual mountain top, so if camping out under the stars and sharing communal bathrooms with 8,000-10,000 people is not your thing, you can actually stay in relative comfort at The Mountain Top Hotel, a bastion of old British colonialism. 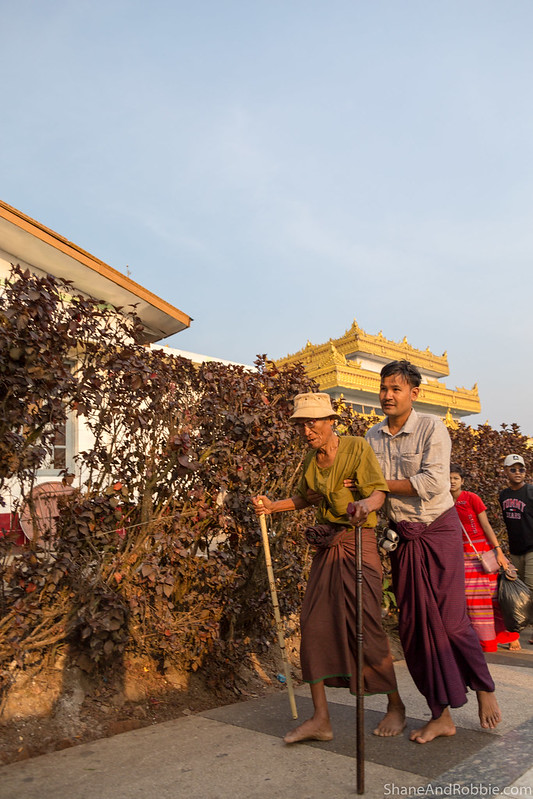 We explored the whole temple complex, watching as people lit candles and prayed; left offerings of food and flowers; tied prayer bells to railings; and of course, affixed gold leaf to the Golden Rock*.
*Like everywhere we’ve been in Myanmar, this is a male-only activity. Women aren’t allowed up to the rock, and instead give their gold leaf to monks who apply it to the rock for them. 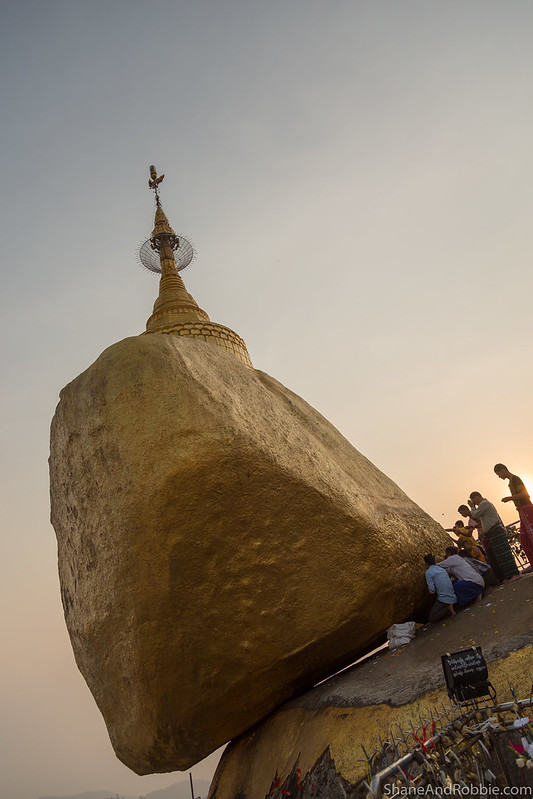 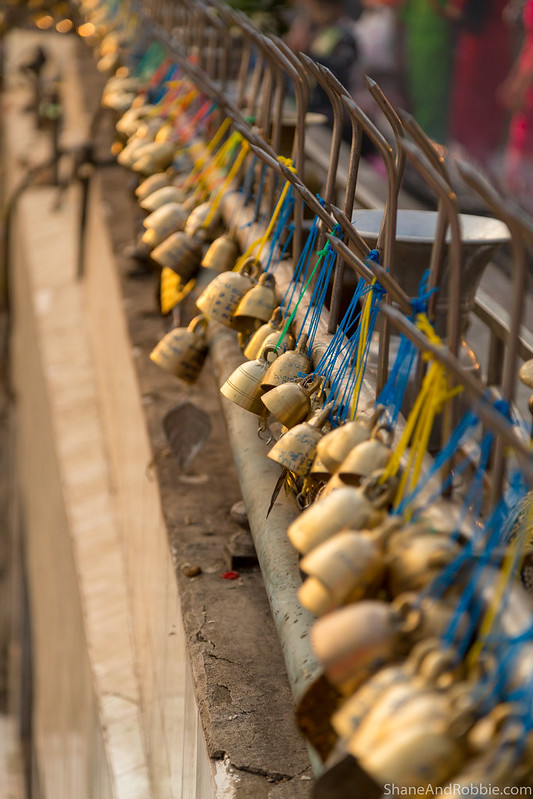 The actual Golden Rock itself was impressive – perched at an impossibly precarious angle on the very edge of the cliff top, with just a small part of the rock balancing on the earth beneath. 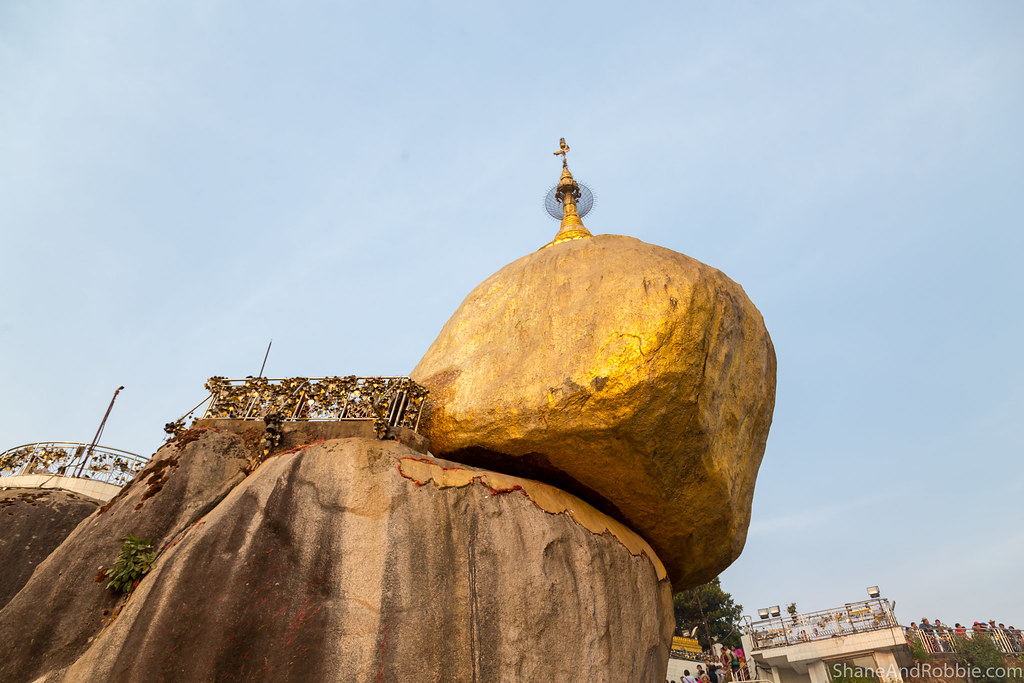 As fascinating as the boulder was, however, the people were far more interesting to us – we spent an amazing couple of hours just watching everyone and enjoying the carnival atmosphere. 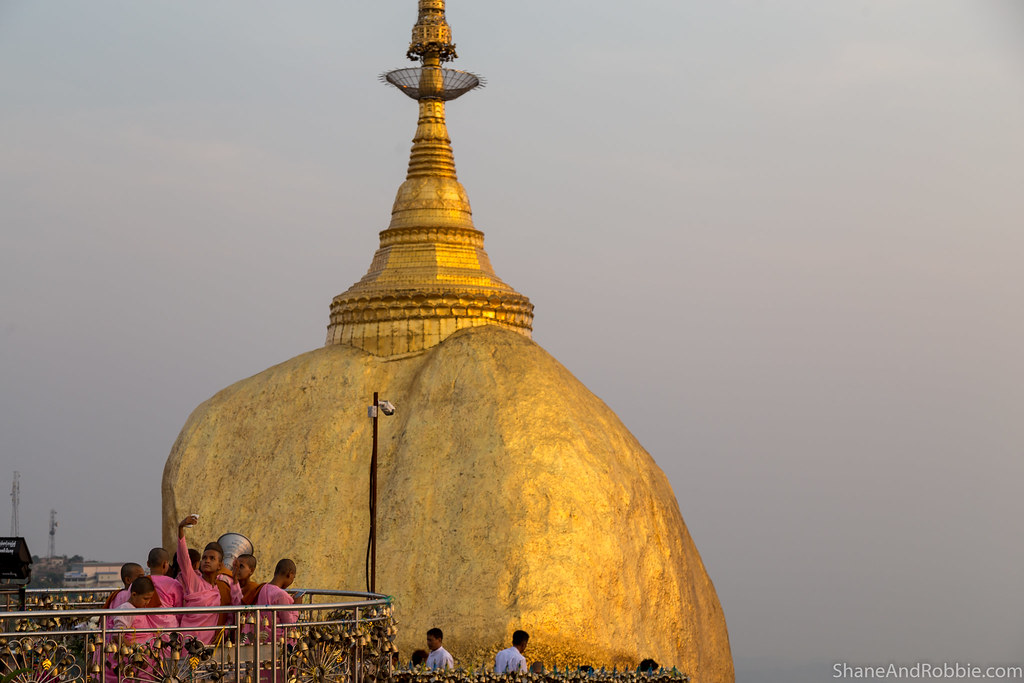 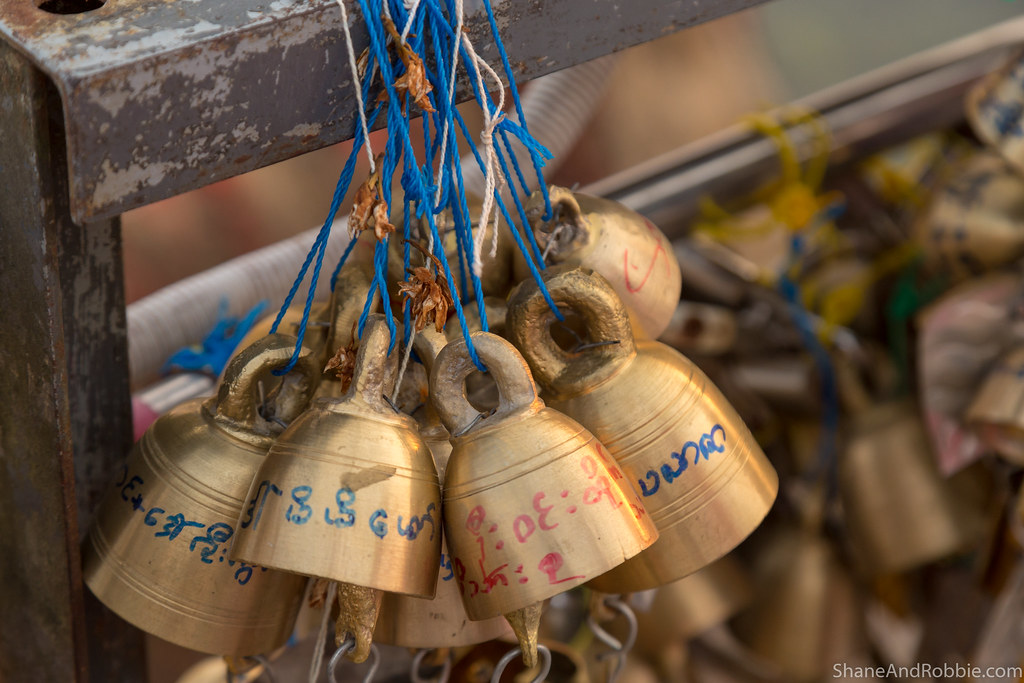 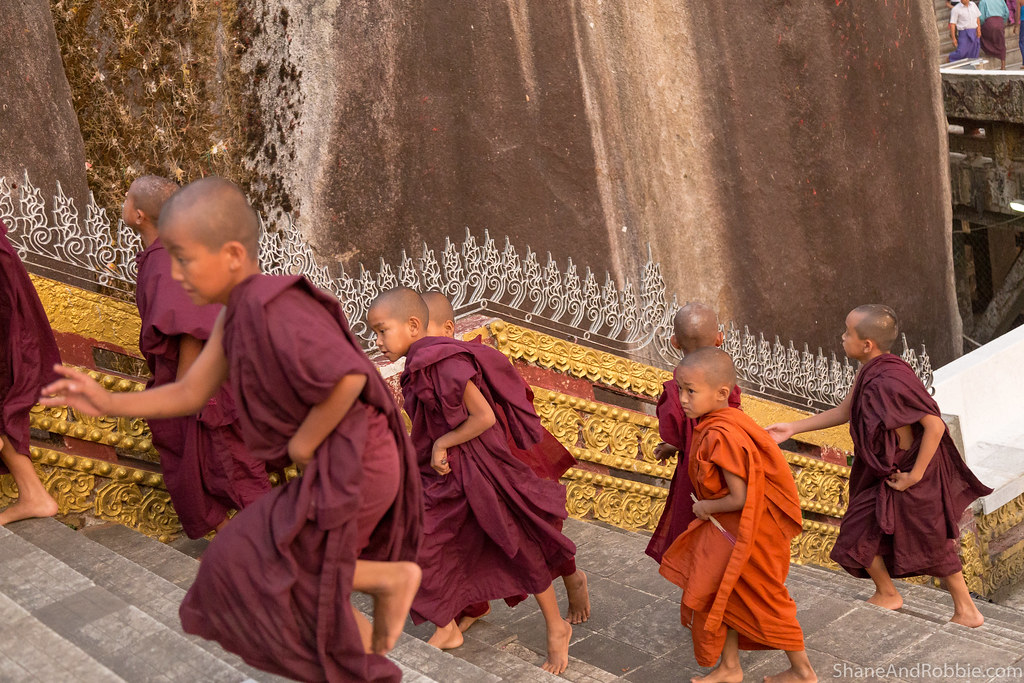 As in many parts of Myanmar we’ve been, we ourselves soon became an attraction and we posed for numerous photos with locals who had never seen a real life Caucasian before. It may seem a little weird, but the people here are just so friendly and they asked so politely and sweetly to take our photo that we couldn’t help but accommodate them. 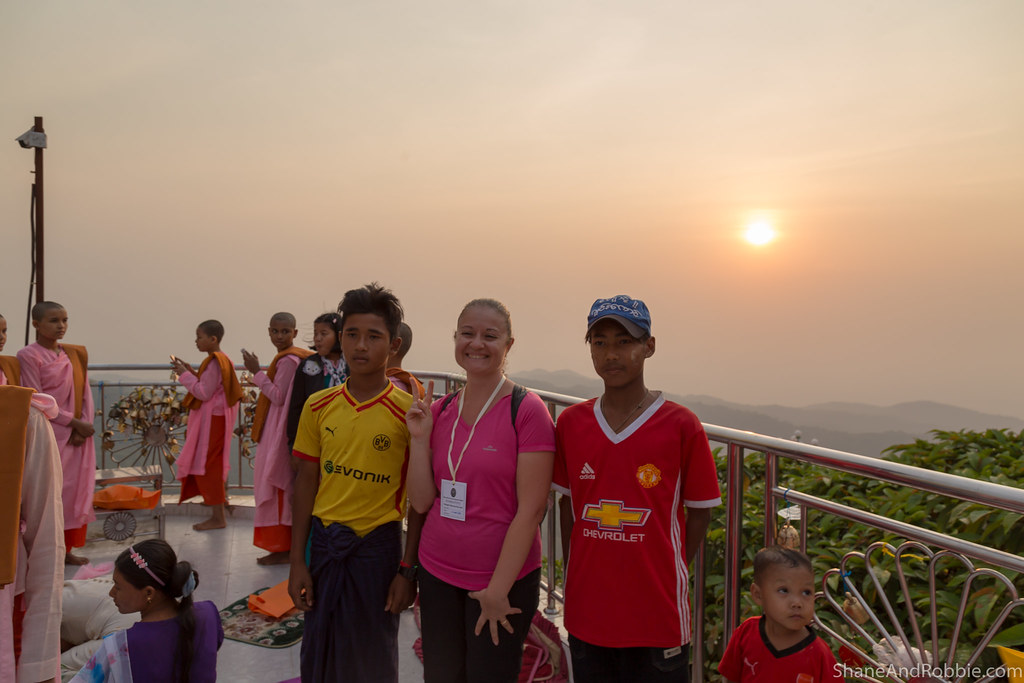 As the sun began to set, the air got surprisingly chilly* and we found a sheltered spot away from the cool winds to watch as the last light of the day gave the rock a beautiful warm glow.
*The Golden Rock is situated at 1,100m above sea level and gets much colder than in lowlands below. 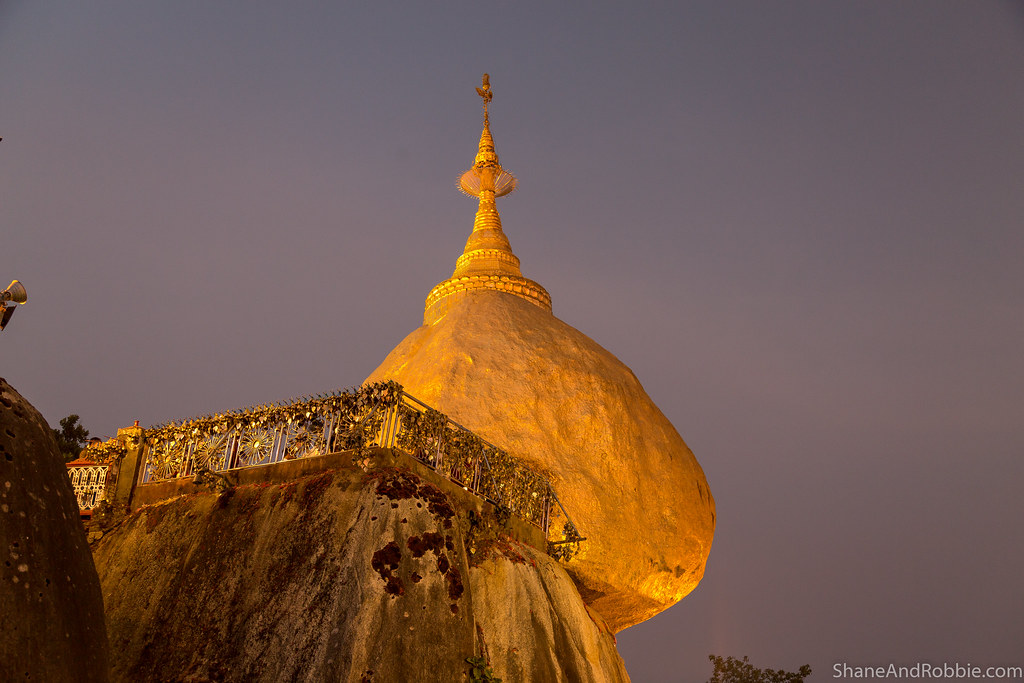 The name Kyaiktiyo means “temple upon a hermit’s head”. The legend has it that Buddha himself offered a strand of his hair to the hermit called Thaik Tha. The hermit, in turn, decided it would be a good idea to notify the king about it and ask him to built a temple in order to enshrine the Buddha’s hair. The king found a rock in the shape of the hermit’s head and there the single strand of hair was placed. It is this hair that supposedly keeps the rock in place and prevents it from tumbling down the hillside (no mean feat in a country where earthquakes are commonplace). Legends also say that anyone undertaking the pilgrimage to the Golden Rock will be blessed with wealth and health. 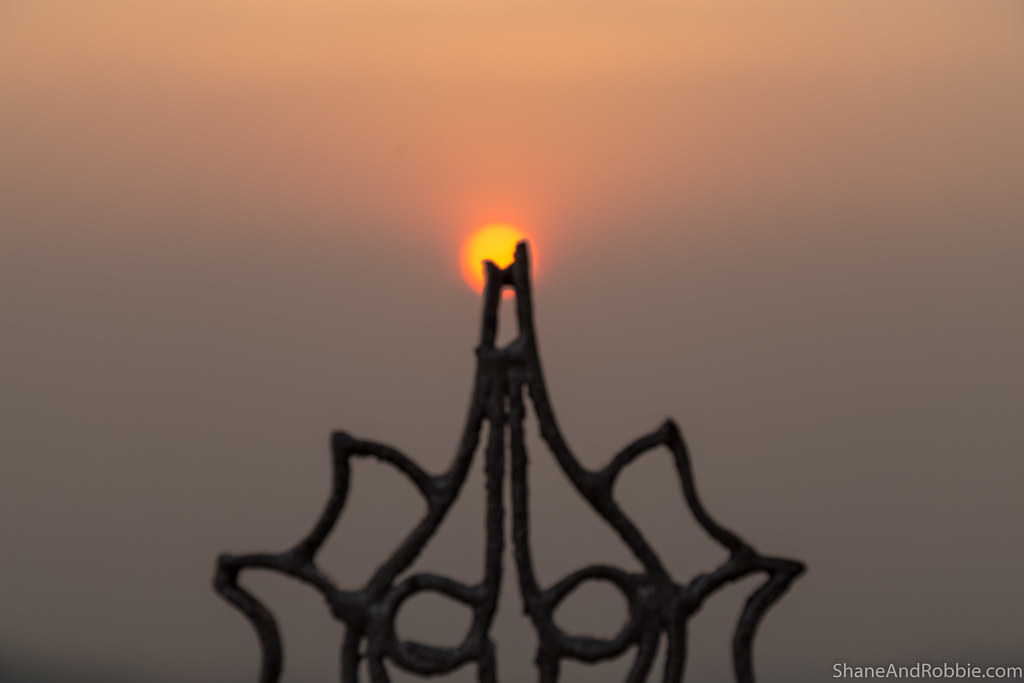 As darkness settled in, candles were lit all around the base of the Golden Rock, creating an unforgettable scene of candleight mixed with smoke, the chanting of monks, and the laughter and chatter of families. 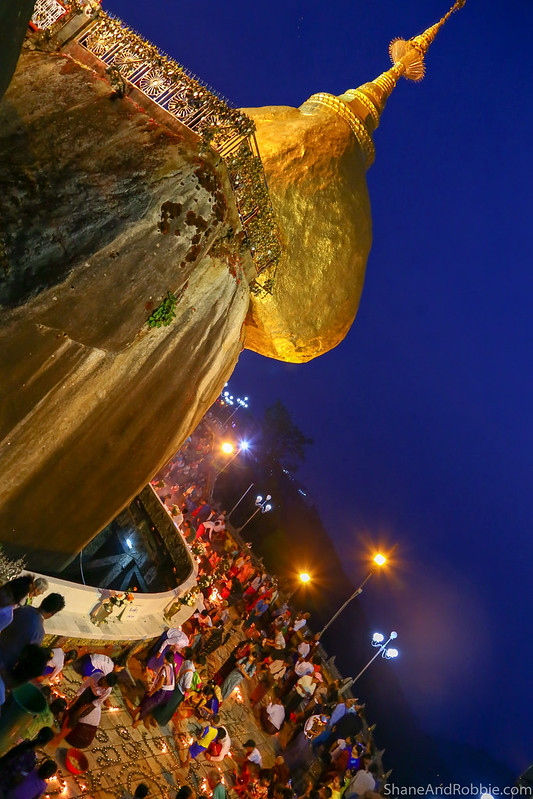 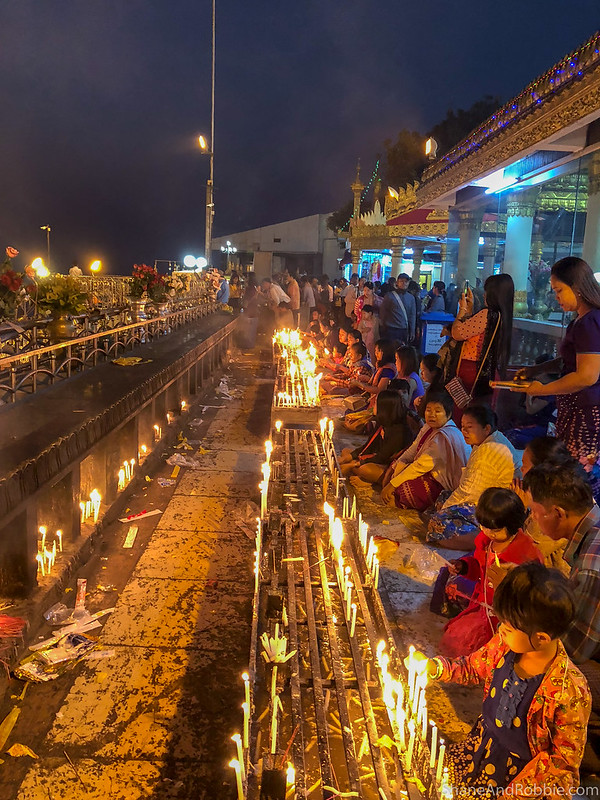 As the temperature continued to drop, we decided to call it a night and walked back down to our hotel for dinner, a warm shower, and a cosy night’s sleep. And now we’re being lulled to sleep by the sounds of pilgrims’ chants, as the lighting of candles and offerings to Buddha continues throughout the night. 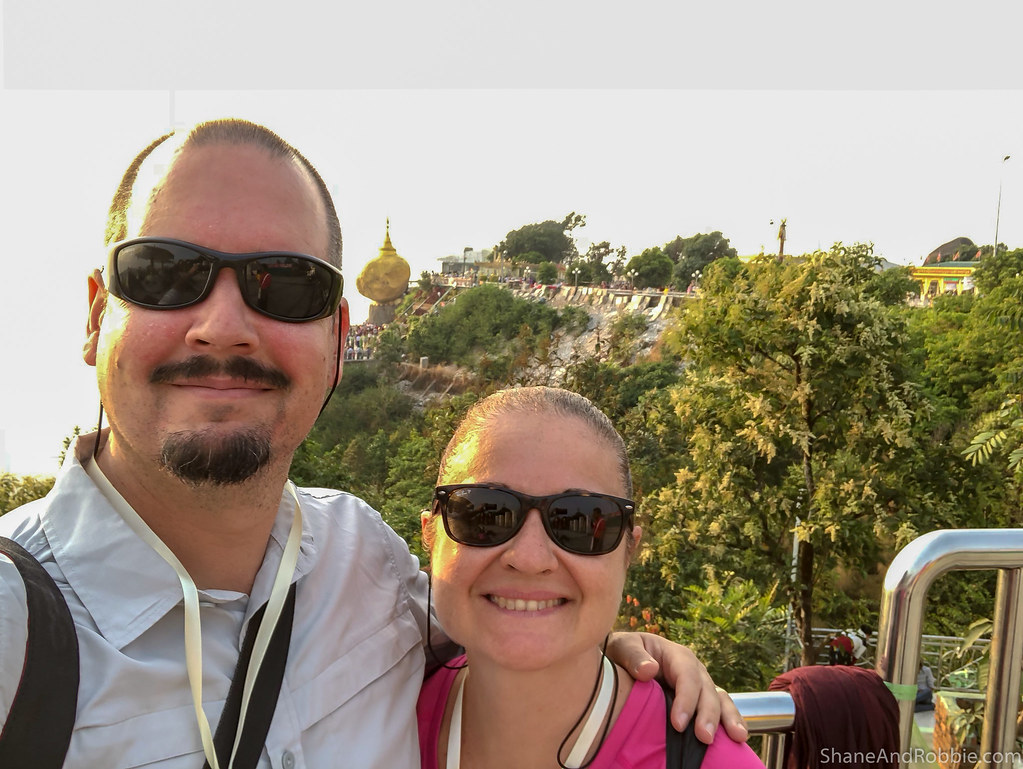