Welcome to Tuesday 2nd July 2013 blog fans! We awoke this morning to dark clouds, thunder and rain; not just little sprinkles of rain either – a torrential downpour of big fat drops. “Great excuse to sleep in!” we thought. So sleep in we did. I love being on holiday! *GRINS LIKE A CHESHIRE CAT*

There are only so many hours you can spend lounging around in bed though, so we eventually got up and went foraging for food. Breakfast consisted of a weak, milky coffee and a “breakfast BLT sando” which was more garlic and pickle than B, L or T. Seriously, who eats garlic and pickles for breakfast?! Well, apparently we do now. Just as well too because the stench of garlic from last night’s dinner was just starting to wear off us, so we needed a top up.

Having topped up our stores of garlic we avoided the rain by mall trawling around our hotel in Myeong-dong. The malls and departments stores here are 10+ storey buildings packed with shops, and basements that all connect up and form part of the Myeong-dong Underground Shopping Mall. We deduced from all our mall trawling that Korean people must buy LOTS of clothes and cosmetics. Prices were cheaper than Aus but not exactly cheap. We were told that if we wanted really cheap clothes, shoes, handbags and whatever else our hearts might desire, we should go to the Namdaemun Markets. Since the rain had eased off, we did just that.

View of Myeong-dong’s shopping mall strip from our hotel.

People watching from the comfort of our coffee shop. The big Lotte department store across the road is where we started our mall trawling adventures.

The Namdaemun Markets are just a short walk from Myeong-dong, and are the oldest and largest market in Korea. They have been operational since the early 1400’s and are HUGE, taking up a number of city blocks. We passed hundreds of stalls selling ladies clothes, mens clothes, hats, umbrellas, handbags, shoes, sunglasses, carpets, suitcases, soap, pig bits, fish bits, cow bits, chicken bits, spices (especially chilli!), kimchi, fruit and vegetables. It was the usual riot of colour, noise and smell that markets are famous for. It was a fun way to spend a couple of hours.

One of the stalls selling “pig bits”. 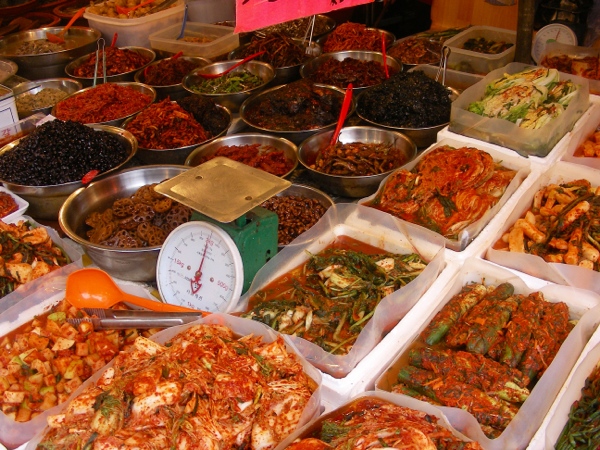 There were heaps of stalls selling a huge variety of kimchi, made from a wide variety of vegetables. 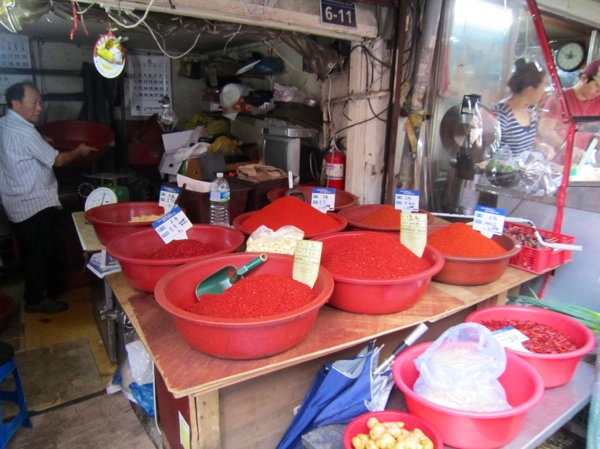 Need some chilli? You can buy it by the kilo here! 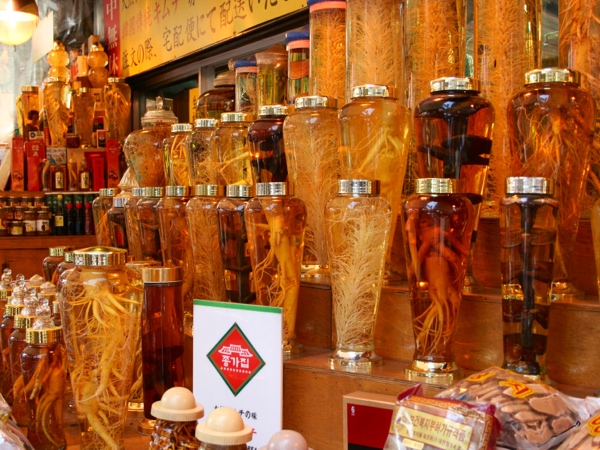 These are all ginseng roots, pickled in various liquid for various lengths of time.  All very medicinal, I’m sure, but way out of our budget!

We thought we’d have some street food (aka: meat-on-a-stick) for lunch, but the lack of breeze, 99% humidity and 30C heat  was making the food sweat. The thought of eating hot, sweaty meat-on-a-stick was not really that appealing, so we opted for  some noodles instead (spicy and garlicky, of course).

After lunch we made our way past Seoul City Hall (a huge glass creation), to the second of Seoul’s palaces: Deoksugung Palace. Originally, Deoksugung Palace was built as the residence of King Taejo’s brother, and as such was not designed to be a palace at all (for this reason it is actually quite small compared to the other palaces). However, when Gyeongbokgung Palace (the one we saw yesterday), was destroyed during the Japanese invasion of 1592, the Korean court moved to Deoksugung, cementing it as a palace. Like Gyeongbokgung Palace, Deoksugung was very colourful and quite ornately finished. 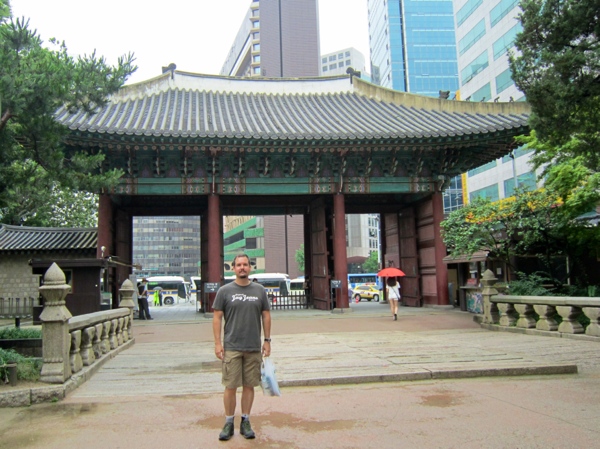 The entry gate into Deoksugung Palace.

The rain kept most people away so we had the palace grounds almost to ourselves. 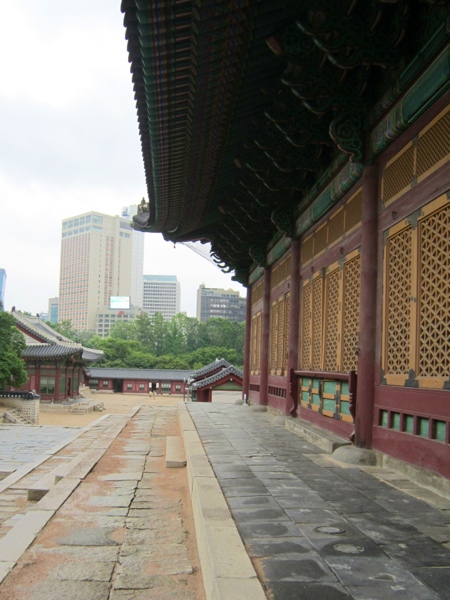 Surrounded by modern sky-scrapers, Deoksugung Palace is a piece of ancient Korea in the middle of a modern metropolis. 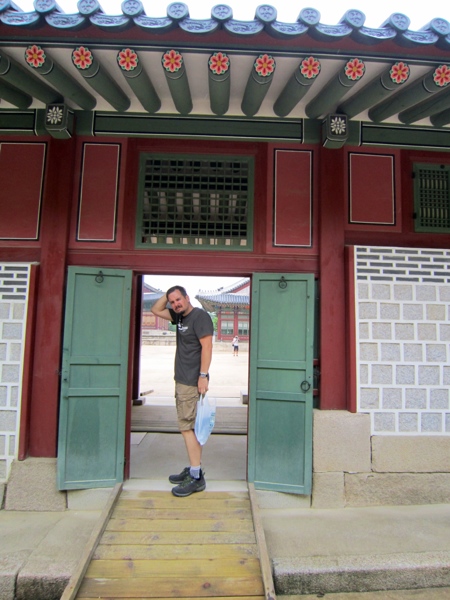 Many of the doorways and entrances were quite low, as Shane found out the hard way!

Overall a pretty successful second day in Seoul. We’re having a great time in Korea and are wishing we had more time to see more of this fascinating country. From what little we’ve seen already though it’s pretty apparent that we are definitely not in Japan any more! As is to be expected, Korean architecture and culture seems quite heavily influenced by that of China, and the people are very different, on the whole, to the Japanese. Not that I claim to know anything about Korean culture, really, as we’ve barely been here 48 hours, but there are a few things we have noticed that seem to be quintessentially Korean; for example:

I don’t mean to compare everything to Japan to imply any kind of superiority of one culture over the other, it’s just that Japanese norms and behaviours are so fresh in our minds that the comparisons arise unbidden. I would say that in Japan there seemed to be an emphasis on maintaining appearances and restraint; in Korea it’s all about energy and expression. For all their differences though, we can also see the similarities that tie Japan and Korea together (and even Singapore, which we’ve seen before). I’m sure if we were going from Korea to China, or on to any of the South-east Asian countries, further cultural differences and similarities would become apparent. For now we’re happy to keep absorbing more of the Korean vibe, and dutifully eating our pickles, garlic and chilli.