A sunny summer’s day in Seoul – perfect for touristing.

We awoke to a bright sunny morning, which was nice after yesterday’s rain. What was more interesting was waking up to a whole lot of big blue police buses and a troop of riot police in bright yellow hi-vis gear (complete with full riot  gear of batons and shields), outside our hotel.  Seems there was a protest organised for today in Myeong-dong, and the police were there to ensure things remained under control (apparently these sorts of demonstrations are relatively common in Seoul). We stayed well out of their way, as advised, until the loudspeakers had quietened down and the crowd had dispersed. Not sure what exactly they were protesting about, but it all ended quite quickly and peacefully, and we were free to be on our way.

Our first stop today was Changedeokgung Palace – the main palace of the Joseon Dynasty (rulers of what is now South Korea from 1392 to 1910.) Originally the kings of South Korea used Geokbokgung Palace as their seat of power, but that was burnt down during the Japanese invasion of Korea in 1592. When Japan was finally defeated and forced to withdraw from the Korean Peninsula in 1598 (with help from soldiers of the Chinese empire), the Korean royals built Changedeokgung Palace. This remained their residence and seat of power until 1910 when Japan officially annexed the Korea peninsula, ending Joseon rulership and effectively making Korea a Japanese colony. Descendants of the last Joseon king of South Korea (King Gojong – who was reputedly poisoned in 1919 by the Japanese), are still alive today, but retain no power (political, ceremonial or otherwise). With a history like that, you can see why even today the relationship between Korea and Japan is somewhat strained. (and yet, having just been to Japan, we can see how much these cultures have in common and how much they have, perhaps, cross-influenced each other over the centuries). Understanding something of its history helped us appreciate Changedeokgung Palace a bit more. 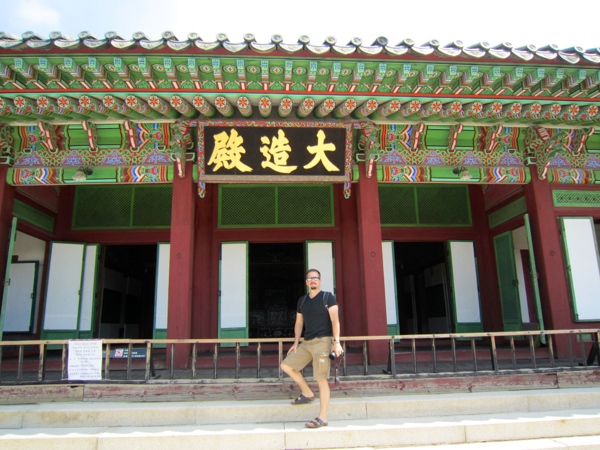 The main throne hall (NOT the “throne room” Shane! Bathrooms are to the left!).

Most definitely the throne HALL of Cheongdeokgung Palace.

The colour and detailing of Changdeokgung Palace. 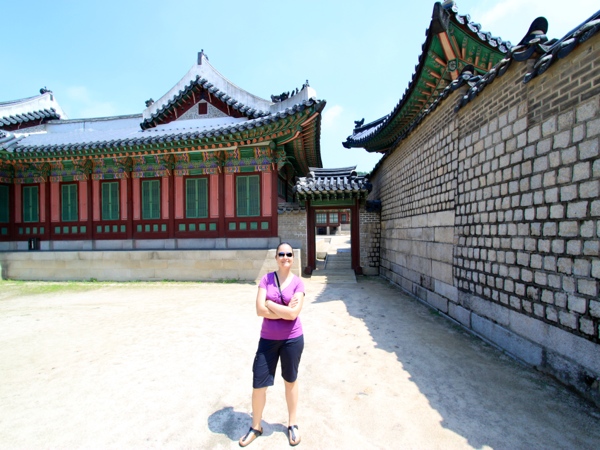 Part of the palace complex includes the much smaller Changgyeonggung Palace, which was built in the early 17th century for the dowager queens of South Korea. It was essentially a smaller version of the bigger palaces we’ve seen, just with nicer gardens.

Obviously dowager queens love gardens ’cause Changyeonggung Palace had an awesome one.

Our final bit of palace-related sightseeing for the day was the Changdeokgung Palace Secret Garden, a 78-acre forest retreat built for the exclusive use of the royal family. The garden incorporates a lotus pond, numerous pavilions, landscaped lawns, trees and a wide variety of flowers. Given it was such a beautiful day, the gardens gave us the chance to wander through the green forest, enjoying the shade and the peace and quiet – nice break from the noise and chaos of urban Seoul. 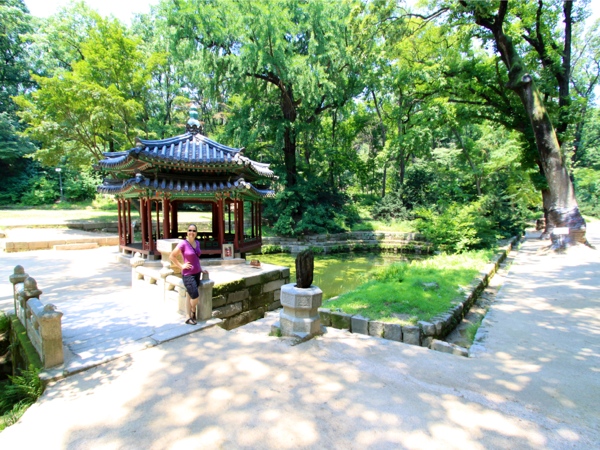 The Secret Garden of Changyeonggung Palace – green, quiet and peaceful.

Fancy a dip? The central pond within the gardens did not look very inviting, despite the heat.

Having spent the morning wandering around some of Seoul’s best historic sites, we headed indoors for some lunch. A quick sandwich (containing the mandatory pickles, of course), a refreshing coffee and we were ready for more! We headed off to the Korean National Folk Museum for our afternoon adventure. The museum had a good collection of displays on everyday life in Korea from prehistoric times to the end of the Joseon Dynasty in 1910, as well as a great display on the Korean language and how it was developed. 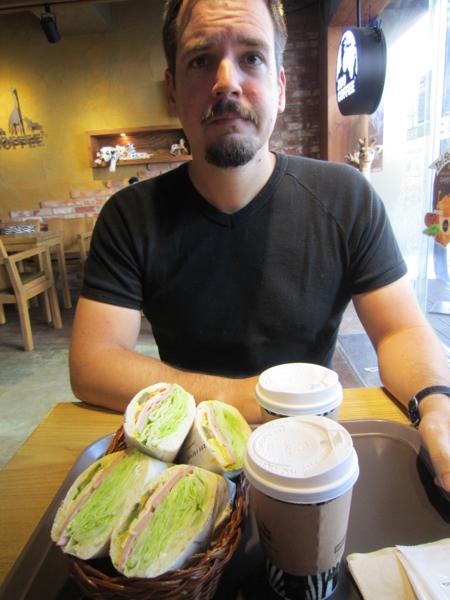 Shane looks a little concerned about the volume of pickle in his sandwich. 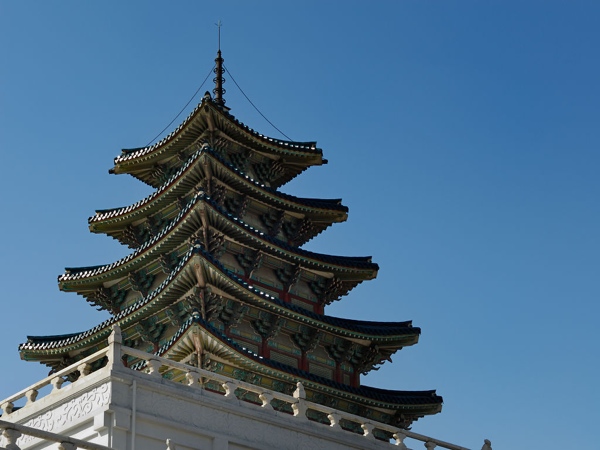 The Korean written alphabet, called hangul,  is unique.  It was literally invented in the early 15th century as part of a widespread campaign by King Taejo to increase the literacy rates of his people. Prior to the creation of hangul, the Korean language was written with adapted Chinese characters and only the nation’s elite could read and write. Hangul was developed to capture the sounds of Korean in a simple, effective way; it consists of 14 consonants and 10 vowels. However, instead of being written sequentially like the letters of the Latin alphabet, hangul letters are grouped into blocks of 3, with each block of 3 symbols constituting a syllable. It is the only existing language for which the inventor and origins are known and part of historical records.

Hangul, the Korean alphabet, is an invented language consisting of 10 vowels and 14 consonants that can combined in groups of threes to create syllables that are then combined into words and sentences. Nerdy, I know, but interesting!

We’ve been trying our best to get our heads around hangul and spoken Korean, but aside from a few very basic phrases, we’re quite illiterate and are highly reliant on the ability of Koreans to speak English. Fortunately many people here in Seoul DO speak impeccable English and are not shy about using their language skills (very different to Japan!). Korea is just generally far more “Westernised” that Japan – there is far more “Western” food here; everyone dresses far more like what we’d see at home; and restaurants and cafes play American pop songs alongside K-pop (which, by the way, is SOOOOOO cheesy it makes Eurovision seem cutting-edge and progressive by comparison!).

Even without English as a common language though, it’s amazing how much you can communicate with a few gestures, some pointing and vigorous nodding/shaking of the head. Though we weren’t quite sure if our pointing and gesturing had done us a favour when we ordered some dakgalbi (translation = spicy marinated chicken and vegetables cooked over a hot plate at your table). Again, this country’s obsession with chilli and garlic is insane; Shane was very interested in the bright red mix of food at first, but as it started sizzling and the air filled with a thick cloud of pure chilli vapour, he became afraid…, very afraid. The chicken and vegetables turned out to be sooo tasty, but sooo spicy. We’ll just have to see what pain it causes us tomorrow!

“Hey what’s that?” At first Shane was curious about what the sizzling mixture contained…

…and then he was afraid. Very afraid. “Errrrrr…that’s a lot of chilli. I don’t think I can eat that without consequences.”