Seoul is a haven for sappy romantics!

It seems Koreans are hopeless romantics. Go figure! We discovered this on our trip up Namsan Hill today. This 262m hill is the highest point in the city and is also one of the few green spots in this crazy metropolis; the whole thing is a park and is extremely popular with Seoulites for exercise, afternoon strolls and romantic liaisons. We went up there for a walk today so we have a change of scenery (we miss trees!), and to try and get some fresh air (Seoul is quite polluted). It was great to be in amongst some green stuff once again, and although we didn’t get to see anything to exciting along the way, it was also nice to spend some time away from traffic and hordes of people. Though we did see a few groups of older Koreans, dressed to the nines in their super-flash hiking gear, going out for their daily or weekly constitutional. Compared to our casual clothes, they looked like they were climbing Mt Everest though, not just strolling up the local hill!

Walking through Namsan Park, seeking green and serenity. You can just see some of the very well dressed Korean hikers behind Shane.

WE were not dressed for hiking – far too casual compared to the locals. Compared to the mountains we’ve hiked in Japan though, this was nothing!

We walked all the way up to the top of the hill, to the viewing platform overlooking Myeong-dong. It was incredibly hazy though so we literally couldn’t see the city, despite it being just a few hundred meters away (this is apparently quite a common phenomenon here in Seoul, with the pollution often getting trapped in the valley and creating this thick haze – eeeeeew, gross!). So no city views to report, though we did have some fun checking out the “Lovers Locks Trees” that sit at the base on N-Seoul Tower (a big communications tower which is now a premier tourist attraction owing to the 360 degree views it affords of Seoul city – you can pay 10,000Won or about $10AUD per person to go up to the observation deck for these views, but given it was hazy as heck when we were up the hill, we decided to give it a miss

Lovers benches up at Namsan Hill.

These “trees” are basically masses of padlocks locked into place by loved-up couples who then throw away the key as a symbolic gesture of their commitment. There were thousands of these silly things up there! The whole park at the top of Namsan Hill was set up as a bit of an ode to all things romantic, with love-heart shaped flower beds and benches built so that is two people sat on the, you’d automatically slide in to the middle towards each other. Cute, but sooooo silly! 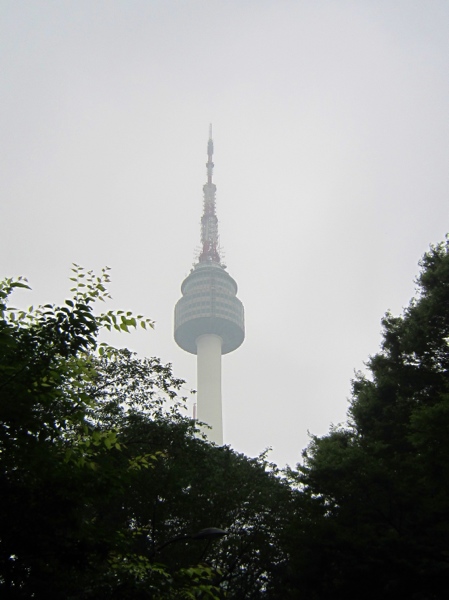 N-Seoul Tower and its blanket of smog and haze.

Thousands of padlocks, left as a symbol of love and commitment. How romantic! 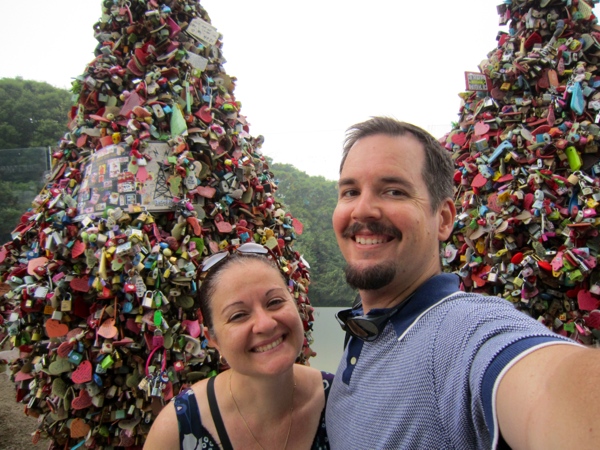 Us trying not to wet our pants laughing at all this silly lovey-dovey stuff. (In case you were wondering: we did not leave a lock with our names engraved or written on it up there.)

Unfortunately that’s about all we got up to today as I finally gave in to the cold that’s been trying to take hold the last few days. According to Shane I spent much of last night doing an impression of Darth Vader sucking air through a bucket of glue, so we went in search of a chemist today and through the power of sign language I managed to communicate my need for an expectorant to the bemused, white-coated pharmacist. He gave me a bottle of liquid cough medicine whose ingredients we have been able to look up on the internet (all legitimate, though likely to induce drowsiness). I dosed myself up after lunch to try it out and it seemed to help. At least this way Shane can get some sleep tonight (I slept fine last night!).

Shane’s convinced I’ve got some hideous Korean Pigeon Flu, thanks to all the people hawking up their snot balls in the streets (it’s a Chinese/Korean thing – I’ve seen enough tourists do it in Aus to have expected it over here, but it’s still gross). Apparently they cough up all that phlegm rather than swallow it coz it’s healthier…, yeah, sure, maybe for YOU, but what about all the innocent people around you that are being exposed to your mucus? I’m all for cultural uniqueness (vive la difference and all that), but spitting in the street is not OK – EVER. I think Shane is wrong though – I’m pretty sure this is just your run-of-the-mill flu and in a couple of days I’ll be fighting fit, ready to scale small mountains once again. Maybe the vodka in Russia will help? Will let you know tomorrow night after our flight to Moscow!